Just like any of the LEGO® Creator 3-in-1 sets I’ve reviewed over the last couple of weeks, the Propeller Plane is a similar type of set to those featured in past years. This 2020 version can be built into a trio of airbourne crafts including the lead model, which is a Propeller Plane, along with alternate builds of a Helicopter with landing pad and a Jet Fighter plane. But can a set which is similar to previous ones be worth adding to your collection? Read on to find out as I continue my Creator 2020 set reviews and take a look at all three builds featured in set 31099. 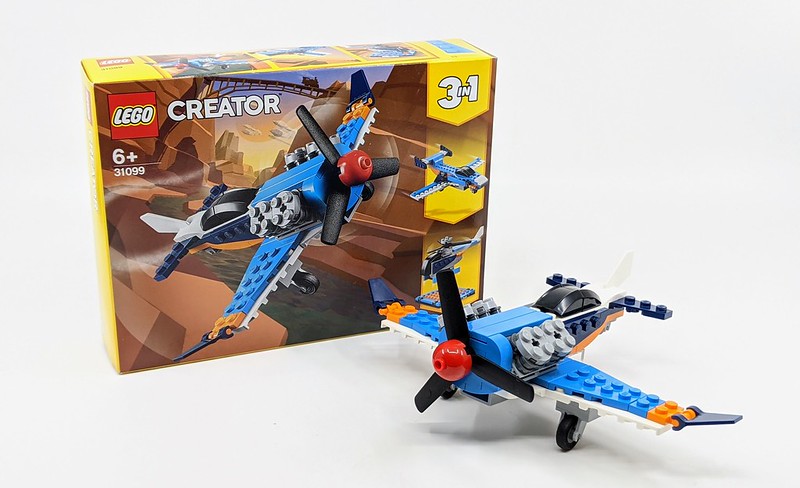 Inspire kids’ creativity and love of play with the exciting LEGO® Creator 3in1 Propeller Plane (31099) set. Kids will love to make cool takeoffs and landings with this colourful plane, featuring a spinning propeller and adjustable wing tips. Creative freedom Kids get 3 different build-and-play experiences with this LEGO Creator 3in1 set. They can build a propeller plane and then rebuild it into a jet plane or a toy helicopter with landing pad. Then they can let their creativity loose and build something completely new. This great building toy taps into different passions with its 3in1 building options and makes a great gift for all occasions. Iconic, stand-alone models LEGO Creator 3in1 sets offer kids models that are detailed and realistic and encourage imaginative play. The models give endless building and play opportunities while helping to spark creativity in children of all ages. The fun, inspirational sets also make great little Christmas gifts or birthday presents for kids. 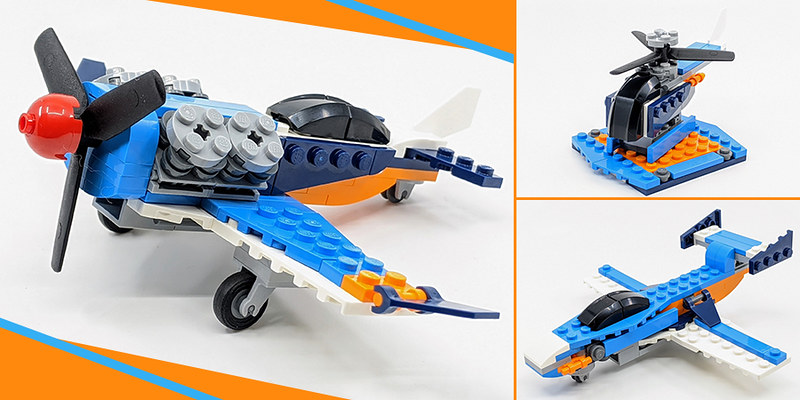 The lead model is a slick looking single propeller plane. It has the classic appearance of a single seater aircraft, so much of the build is focused towards the front of the plane. With the wings being set more towards the front along with a set of four engines. There is nothing particularly amazing in terms of the build, however I rather like the use of the darker blue elements to give a flick winged shape down each side of the plane. Those fiddly quarter plate tiles are rather small but they do add nice detail to sets. 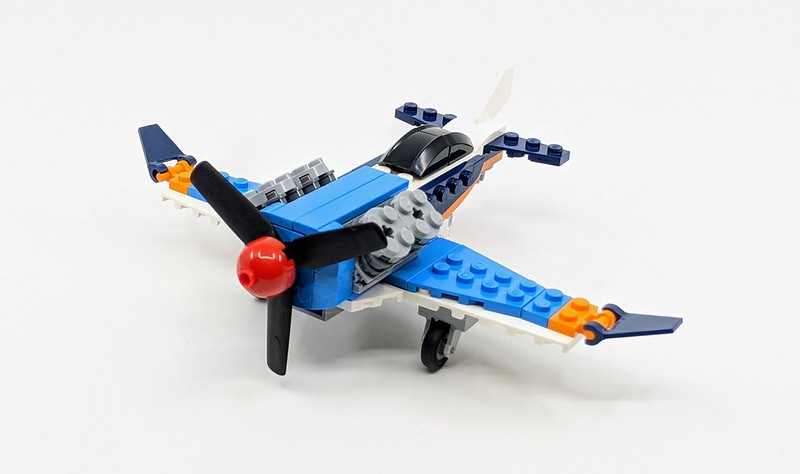 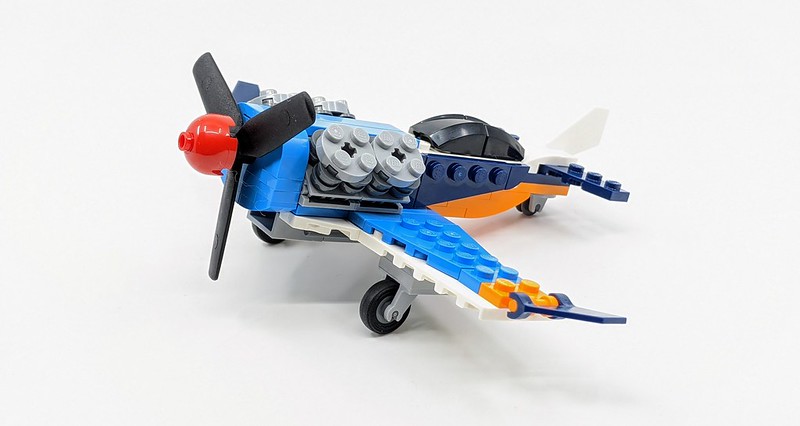 The colour scheme of the set is a little usual, yet the orange, white and two tones of blue, kind of work well together. Although most real world planes would be a single colour, that would make for a rather sad looking set. There are a couple of bits I’m not a fan of, these include the red dome used for the nose of the plane and the tiny wheel at the rear. One looks out of the place and the other gives the plane too severe of a sloped stance. Still the overall appearance is pretty nice. 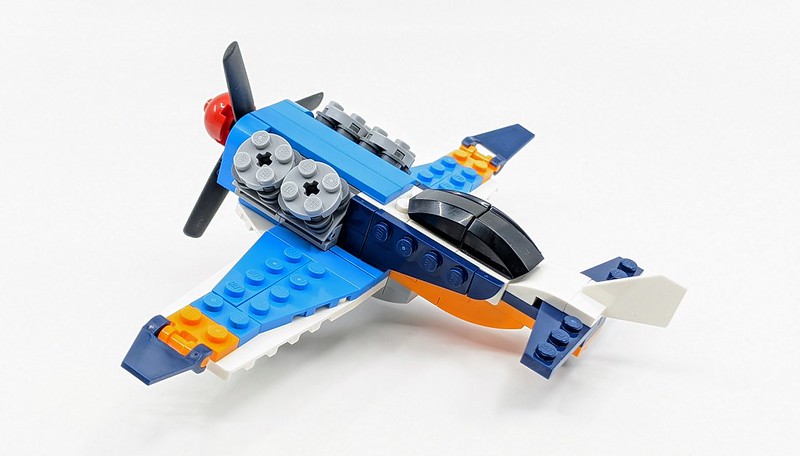 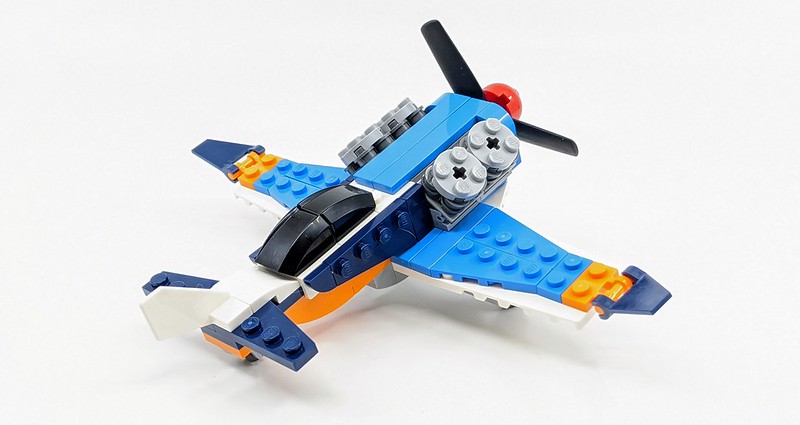 The second model, which can be built using some of the elements from the lead build, is another plane but this one is a Jet Plane. The style is completely different to the other plane, although it uses some parts for the same function across both planes. I like how a 2×1 double corner wall element is used to create an air intake on the front of the plane, it’s also used in a similar way on the Propeller Plane. The way various angled plates are positioned, give it a nice looking bit of details around the cockpit and wing areas. Again, that includes those 1×1 quarter plates. 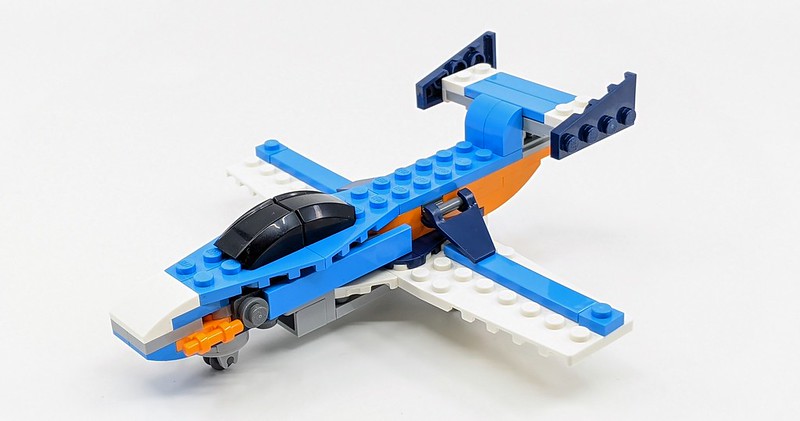 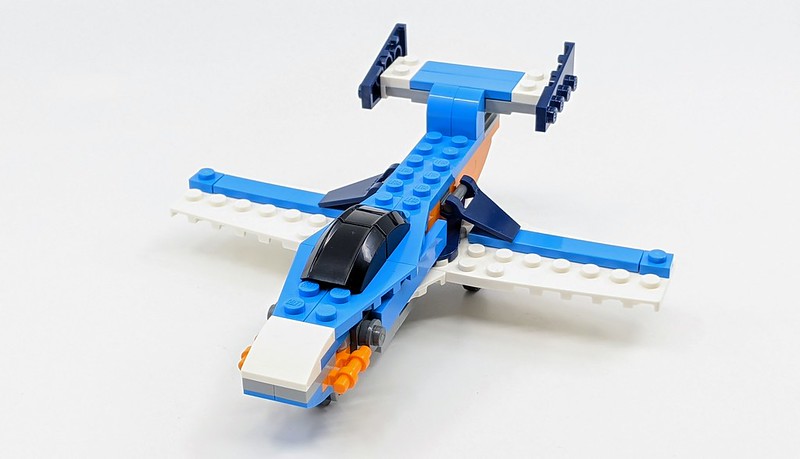 The smallest of the three builds is a helicopter, so small in fact it also includes a helipad. This is on a much smaller scale compared to the other two builds. If you were to remove the helipad, it could pass for a polybag set. That’s not to say that is a bad thing. The issue with these 3-in-1 builds means the various builds are limited by the parts included to create the lead build. I rather like how the two black curved bricks has been positioned to create the front of the helicopter, the only thing that lets it down a little is the rotor blade, if you push the 2×2 round plate down too much the blades won’t spin. 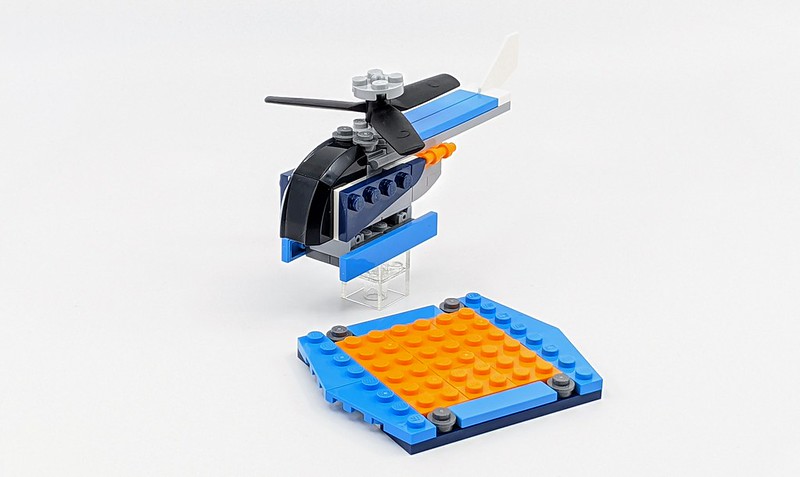 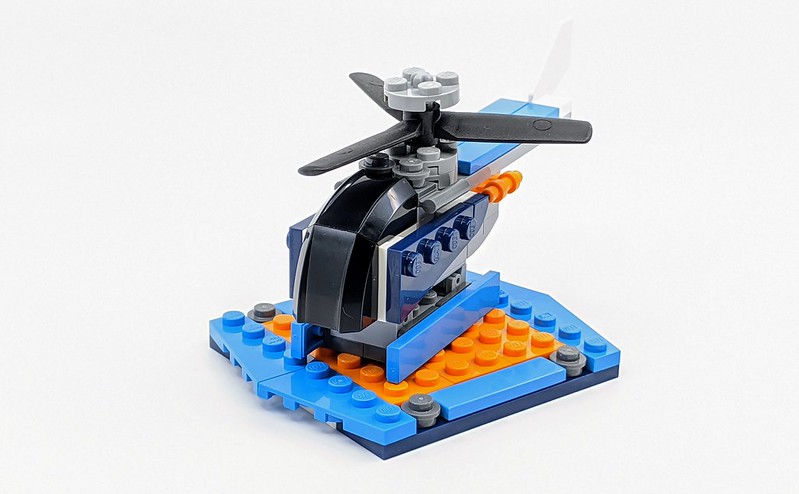 Of all the new Creator 3-in-1 sets released this year, this is the smallest of the boxed sets. Which means it has a nice price point. So it’s both a good set for younger builders to buy with their own money and a nice enough set to get a LEGO fan as a gift. The three builds are each different enough to warrant trying all three, but the lead model certainly seems to be the best looking of the bunch. There are some decent enough parts, should that be the main reason you pick up sets, but nothing rare or new. These Creator 3-in-1 sets may not have the wow factor of other themes, however they are as near to old school building as you can. No license to worry about, no Minifigures, just a bunch of bricks and a bunch of builds.