LEGO® Ideas has become a great way for fans of various TV shows to share their fandom via the medium of the brick. So far there have been Ideas sets based on Adventure Time, FRIENDS and Big Bang Theory. The latest LEGO Ideas set shared a similar style to the latter two of those sets. Although I must admit that the subject of this latest set is a little odd. Seinfeld first hit screens in 1989, and throughout the 90s enjoyed popularity similar to FRIENDS. Seinfeld is widely regarded as one of the greatest and most influential sitcoms of all time. However, I don’t think it reached the same level of popularity around the globe. Despite that, enough fans backed Brent Waller’s project to get it to 10k and become the 36th LEGO Ideas set. So here’s a closer look at the LEGO Ideas Seinfeld set. 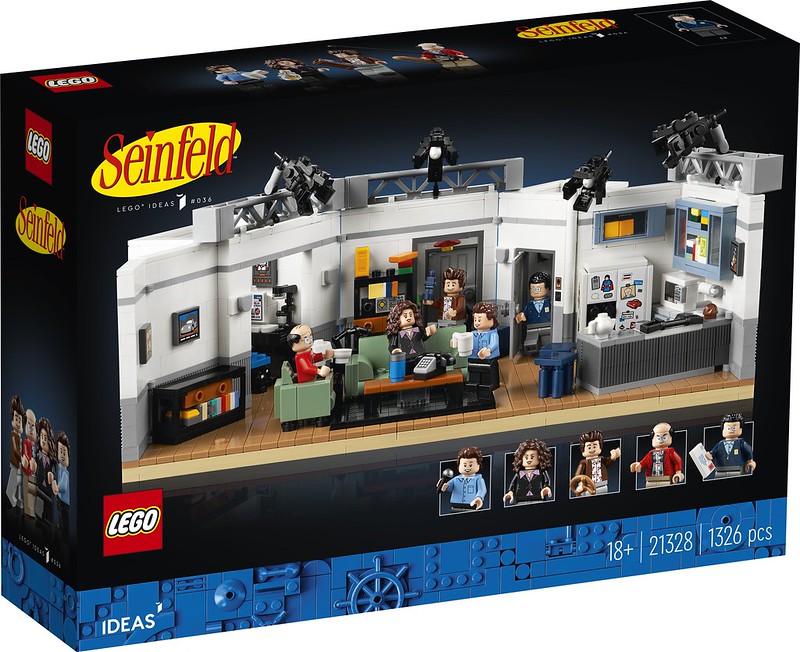 Seinfeld was ‘the show about nothing’ that made everyone laugh, and now you can celebrate the legendary TV sitcom with this collectible LEGO® Ideas Seinfeld display model (21328) of Jerry’s apartment. It’s packed with authentic details to delight fans, such as the kitchen/living room where Jerry and friends would hang out and the hallway from where neighbor Kramer would burst in. Accessory elements include a blue statue, muffin top, painting of Uncle Leo, Prognosis Negative videotape, Commando 8 air conditioner and Festivus pole.

As most TV sitcoms are based around a single location, they become instantly associated with that show. Continuing the trend started with the FRIENDS Central Perk set, Seinfeld’s apartment is a recreation of the show’s sound stage, complete with studio lights and rigging. These details tie it nicely into its TV roots and also works in favour of the build’s configuration. 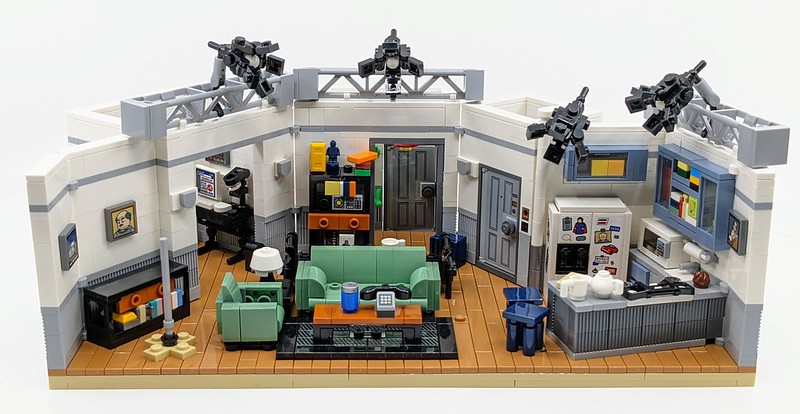 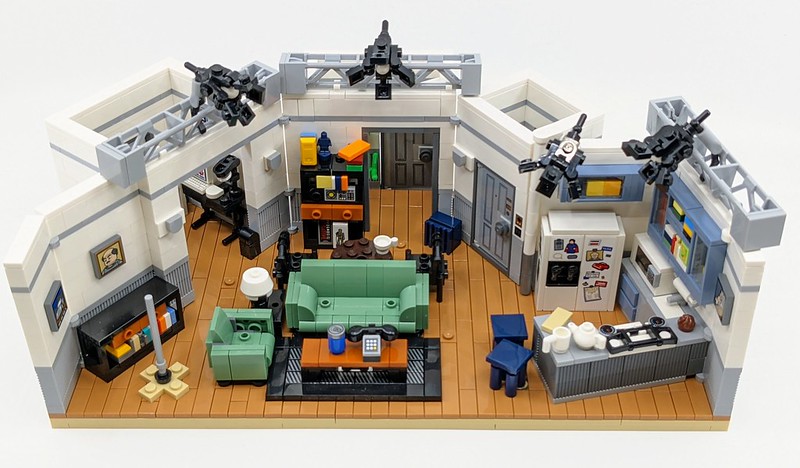 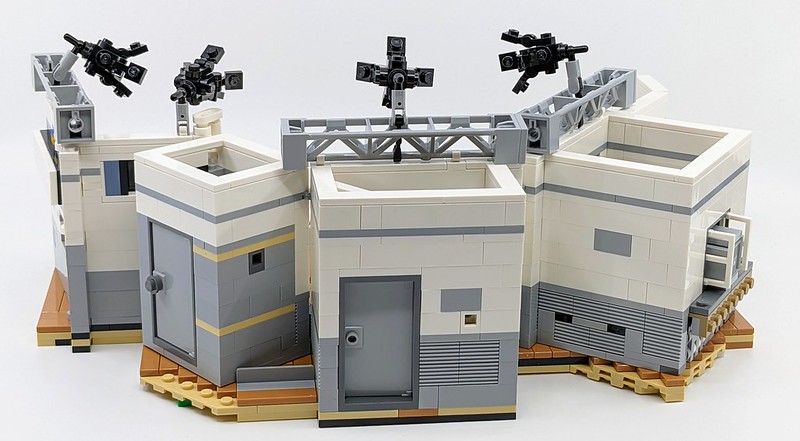 But before you start building the apartment, you construct a small stage. At the end of most episodes of Seinfeld, Jerry would be featured doing stand-up. This small build recreates a slice of the stage. It would have been nice if there was a way to connect it to the main part of the set. Purely as a means of keeping both parts neatly together. 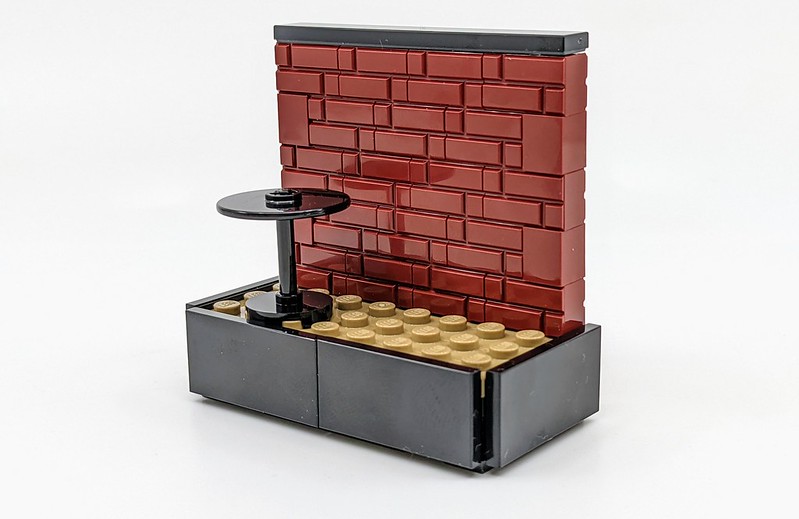 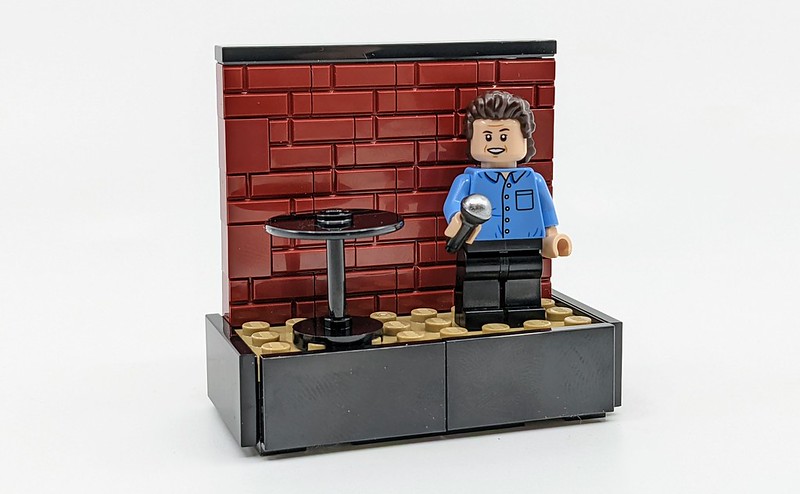 If you watched the TV show, you’ll be familiar with Jerry’s apartment. The room itself is rather nondescript, it’s mainly a single room, with a small conclave area and a doorway leading to a partial hallway. It’s the various furnishings that really bring the set to life. The kitchen area, in particular, is packed with some impressive Minibuilds. These include the fridge and shelving units. There’s also a couple more found in the living area. The use of elements to create these are amazingly well done. In fact, if it wasn’t for all these detail-packed sections it would be a much less exciting set to look at. 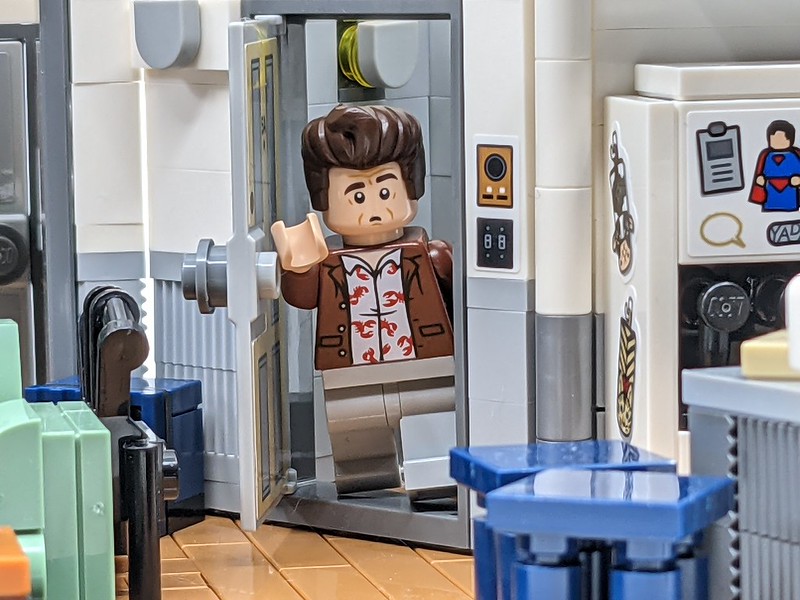 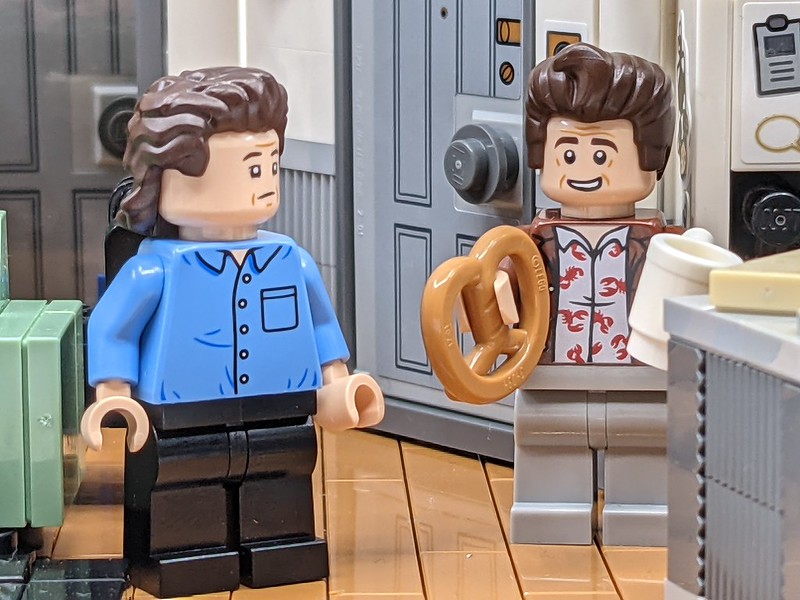 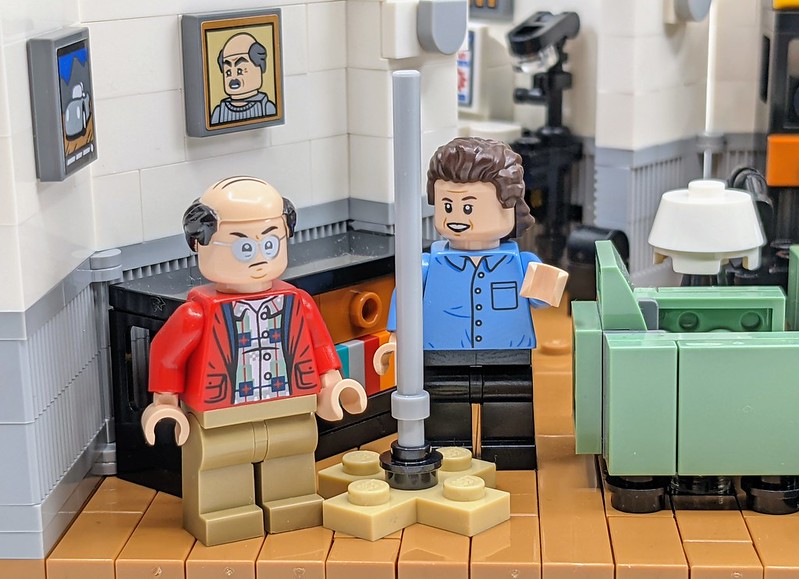 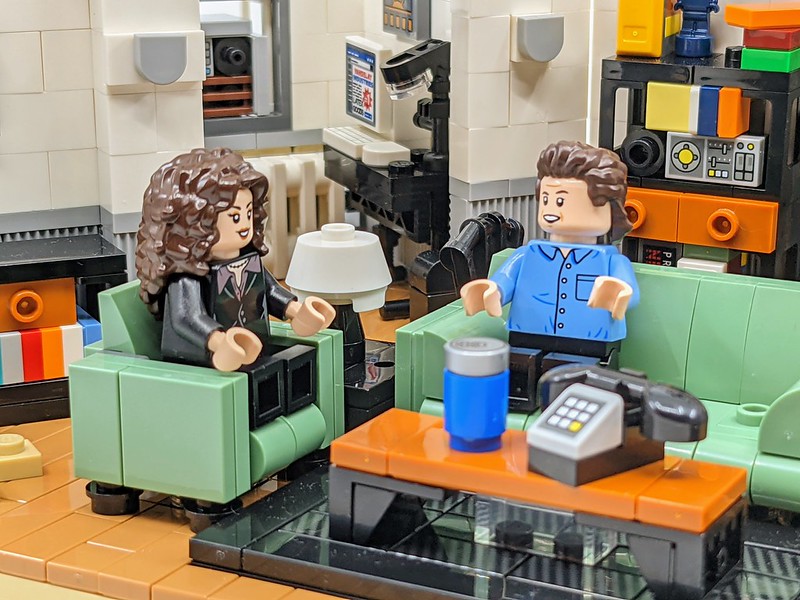 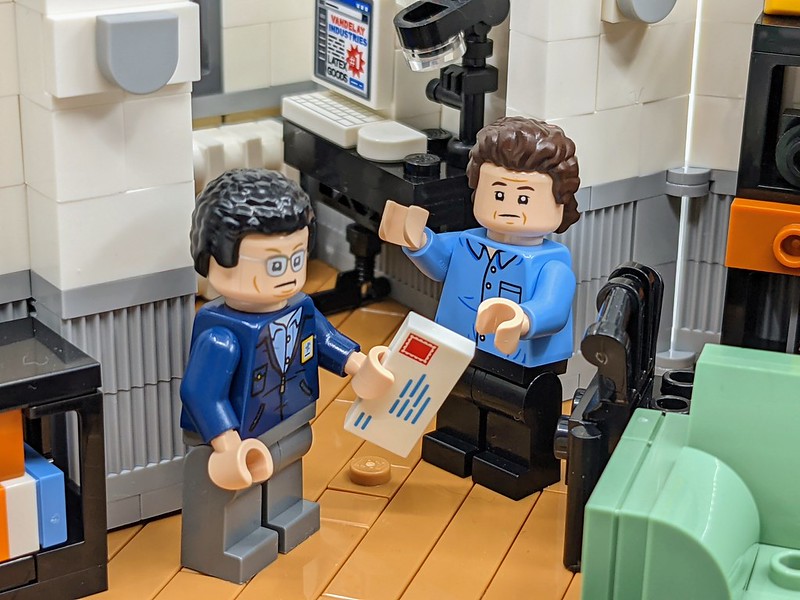 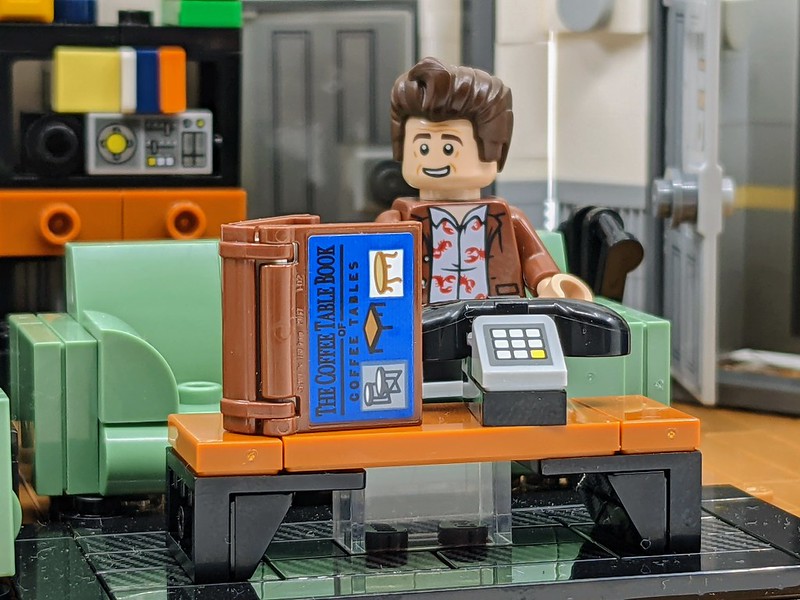 A big thing with sets based on popular TV shows is connecting them to multiple iconic moments in a single build. This leads to the inclusion of numerous Easter Eggs. Some are built into the set, with others achieved via stickers. Some of the most obvious include the Festivus Pole, the coffee table book of Coffee Tables, Elaine’s bagged goldfish, the bike hanging from the wall and some great magnets on the fridge, including a picture of series co-creator Larry Davis. 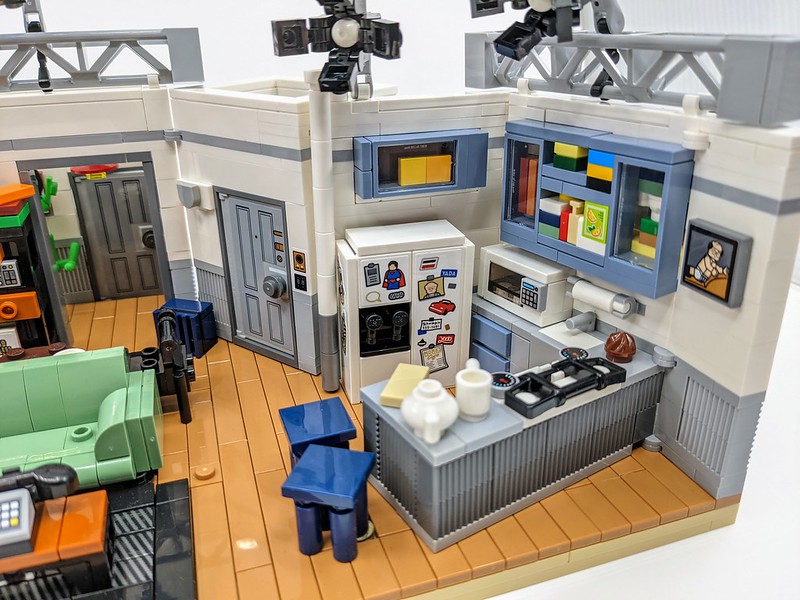 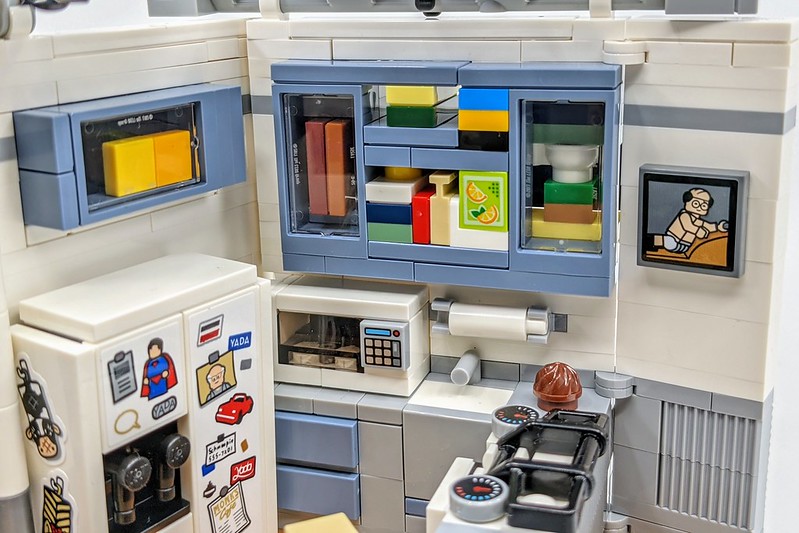 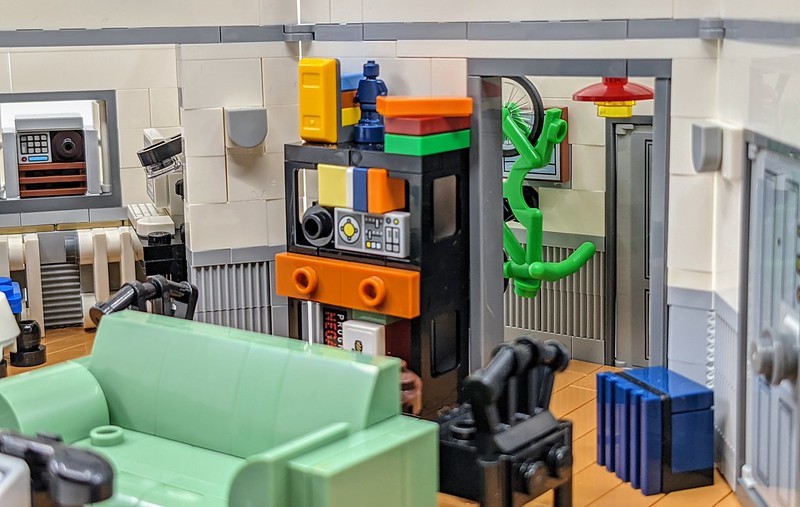 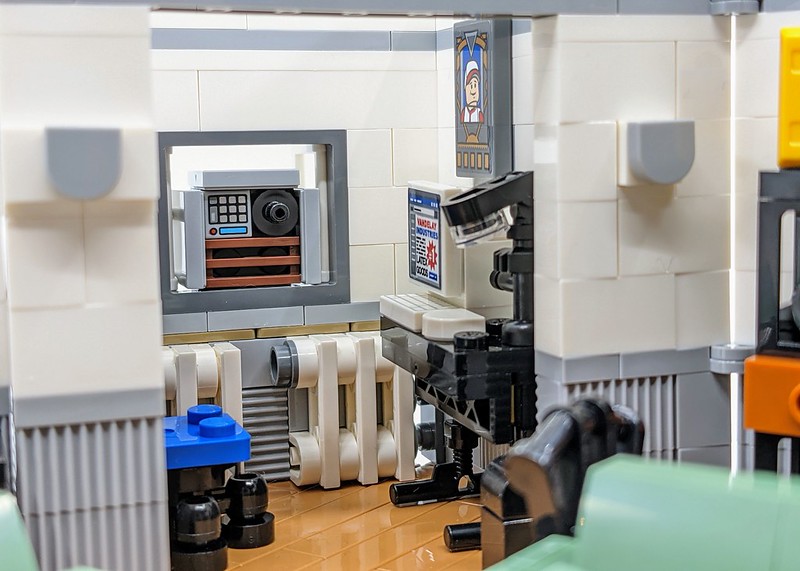 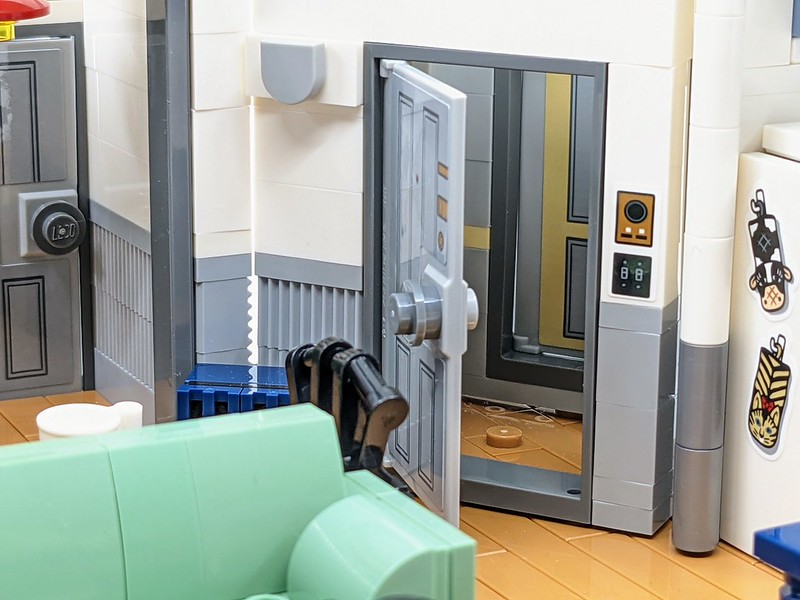 As important as a show’s location is, the characters who inhabit it really bring it to life. Unlike the Big Bang Theory set, which has characters in recognisable outfits, the cast of Seinfeld doesn’t really have a signature look. The set includes five Minifigures featuring the main cast of characters along with Jerry’s rival Newman. Each character looks very much like their real-world counterpart at some point across the show’s nine seasons. Jerry even features a new hairdo, which is a sort of shorter mullet. In some of the official images, it appears George and Newman have the same face. Now whilst they do look very similar, they are actually different with Newman having two expressions compared to George’s one-sided face.

One thing which does tie the Minifigures to various storylines is their accessories. Jerry has a mic, commonly used in his stand-up routines. Elaine has a goldfish in a bag, from the episode where she loses her car. George has his ‘regiftable’ fishing rod. Kramer unsurprisingly has some food along with a copy of his coffee table book all about Coffee Tables. Newman being a mailman has a simple letter element. 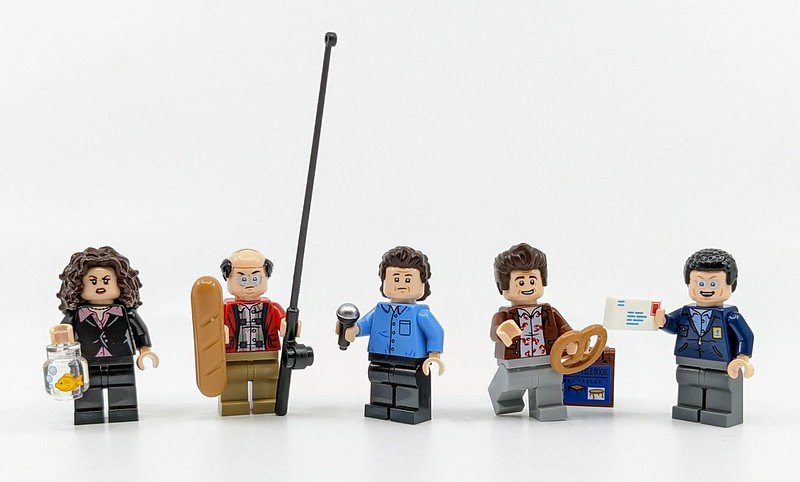 I will admit, I’m surprised that the Seinfeld set has become an official set. I do remember watching a few episodes a few years ago, but it’s not a show which appears to garner a global and continued audience as FRIENDS or to a lesser extent Big Bang Theory. But that’s not to say it isn’t a fun little set. The detail built into small aspects of it are great and there’s plenty of Easter Eggs for fans of the show to discover. And it’s those in particular who will gain the most from this set. 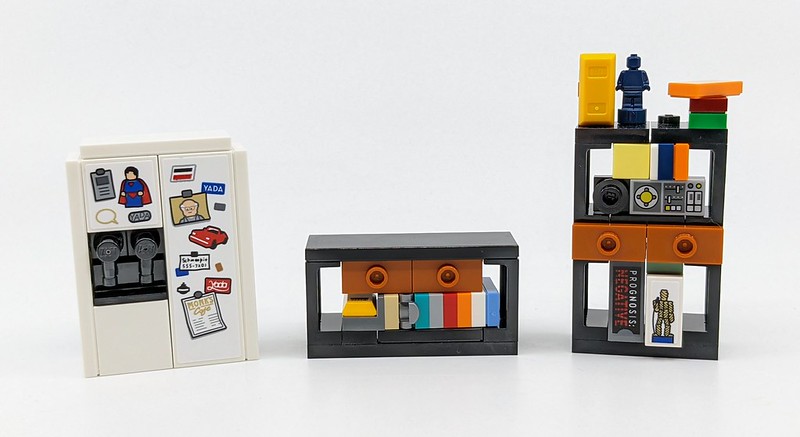