Back in 2019, the LEGO® Ideas platform, previously known as CUUSOO, celebrated its 19th anniversary. To mark the occasion, a number of past project, which had reached 10,000 supporters but ultimately didn’t make it past the official review, were brought back for a special fan vote. Each project could once again be voted for, with the one with the most votes guaranteed to become an official LEGO Ideas set. One project was immensely popular, gaining 10438 votes and proved once and for all that space and LEGO is a popular partnership. That project was the International Space Station. The first section of the ISS was launched into orbit in 1998, but it’s only been inhabited since 2000, meaning this year marks the 20th anniversary since humans have lived aboard the ISS. Making it the perfect opportunity to mark the occasion with a LEGO recreation. But does it make for a good LEGO set, let’s find out. 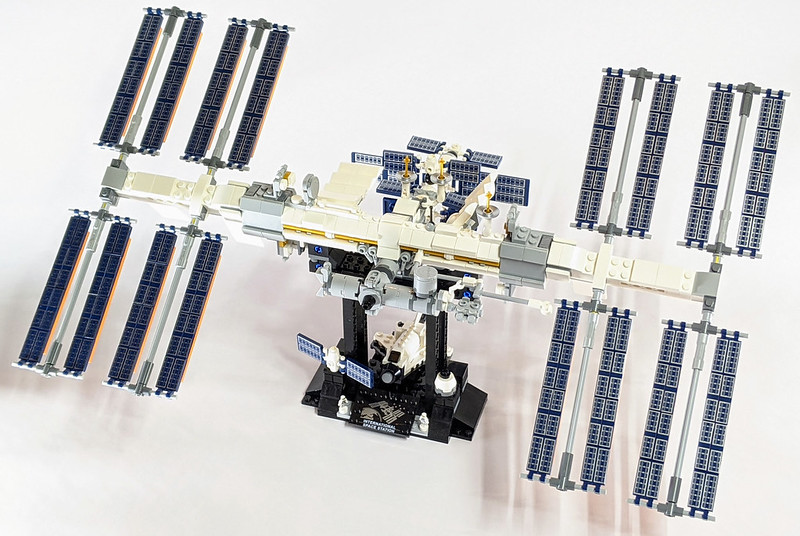 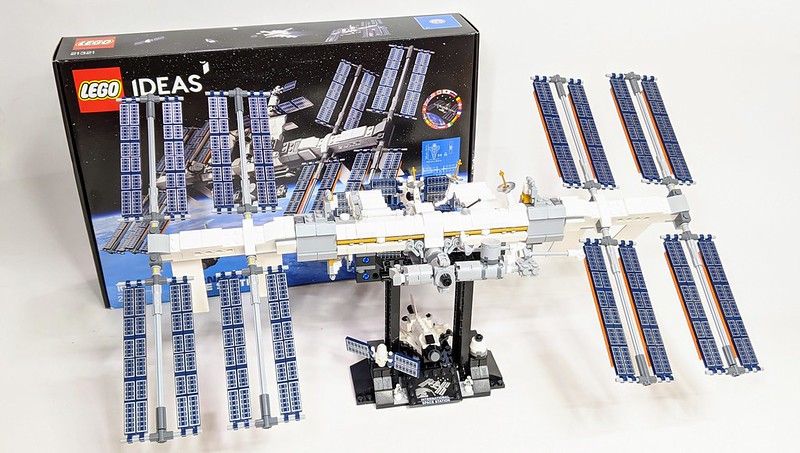 The original LEGO Ideas project was submitted by LEGO fan Christoph Ruge known as XCLD. Although the original project quickly achieved 10,000 votes in Summer 2018, however it didn’t make it past the review stage. In fact this would be the second time Christoph achieved the required supporters for a project based on the ISS. But the project got a second chance to become a LEGO set, thanks a special 10th Anniversary Fan Vote. The ISS, along with three other projects, could be voted for again, with the set getting the most votes, going on to become the next LEGO Ideas release.

This is another LEGO project which I paid little attention to during its support stage and once it hit 10k. LEGO Ideas is awash with sets based on real life space related crafts, equipment and people. Often the all seem rather similar, but I do enjoy a LEGO Ideas set, so as I went about building the ISS, I was both intrigued and a little nonplussed. The build begins with the various additional minibuilds such as the Space Shuttle and satellites. The shuttle looks great, despite it’s small size, and is similar to one included in the Woman of NASA set, but not the exact same build.

The display stand has a similar aesthetics to the stands included in the various UCS sets. So it’s mostly black, with a printed plate on the front, showing a visual of the ISS and it’s name. It also has space for some of the minibuilds you first build. So the shuttle sits in the central sections and the other bits connect to the various exposed studs. The actual ISS then sits atop the two columns. It doesn’t connect via any sort of clutch power, but the way the base of the main section of the build connects to the stand is surprisingly solid and sturdy as well. The only bit you have to watch is the shuttle, as it only perches in the middle of the stand so can easily take-off unexpectedly. 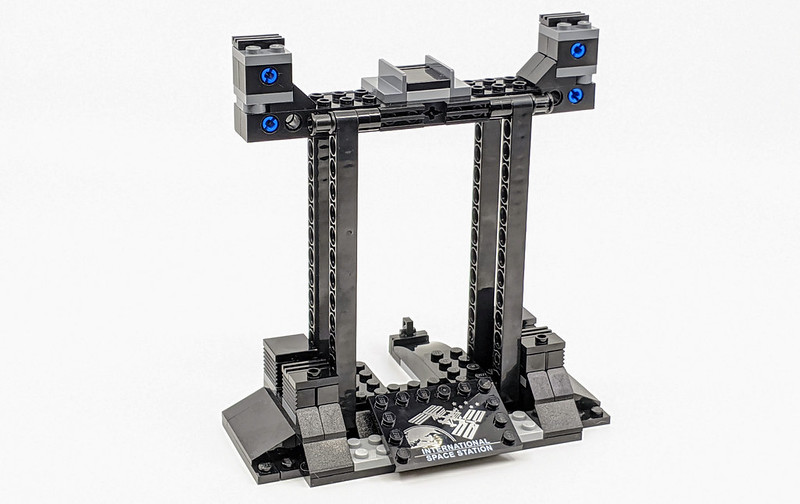 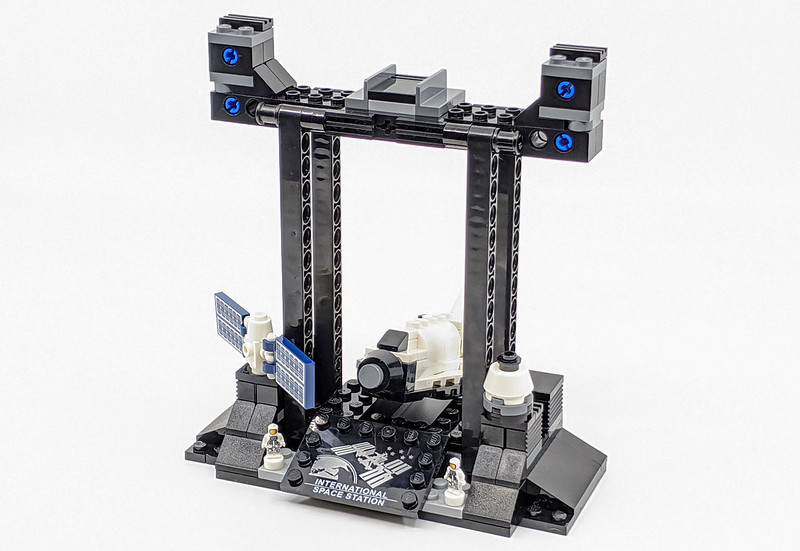 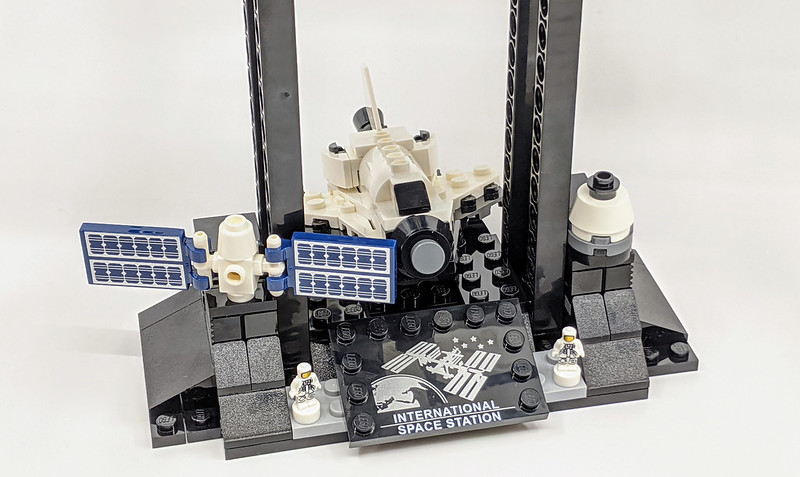 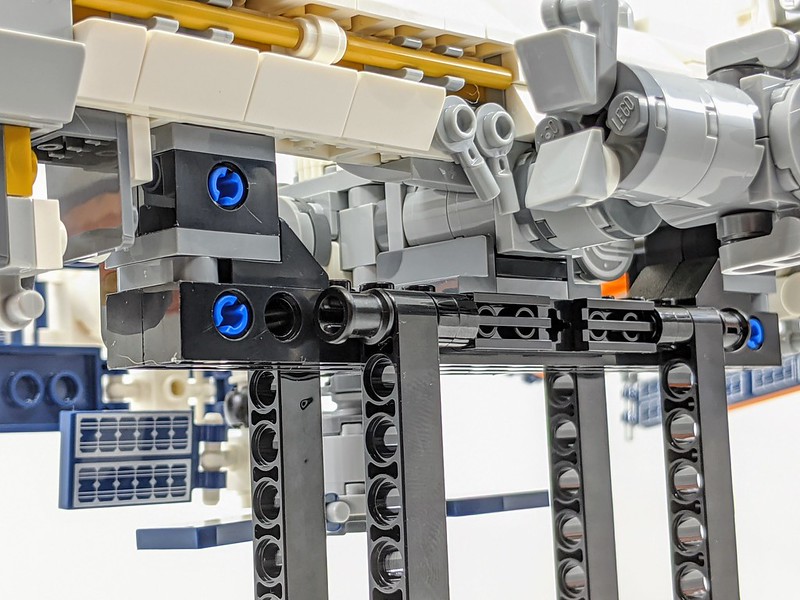 As expected the bulk of the build is focused around the actual International Space Station. The body of the craft may not look like much, but there is a fair amount of elements within it, to allow for its unique shape. What I really like is the build is almost modular, just like the actual ISS is. Each competent of it, is almost a different section of the build. Its various instruments and labs are each built independently from the main body of the set and added to create increasing levels of detail. But even once the central section is complete, the set lures you with a false sense of size. 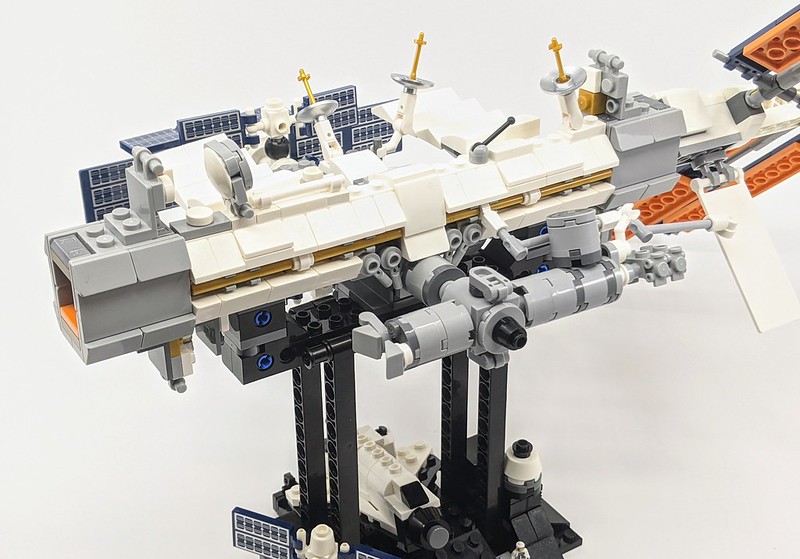 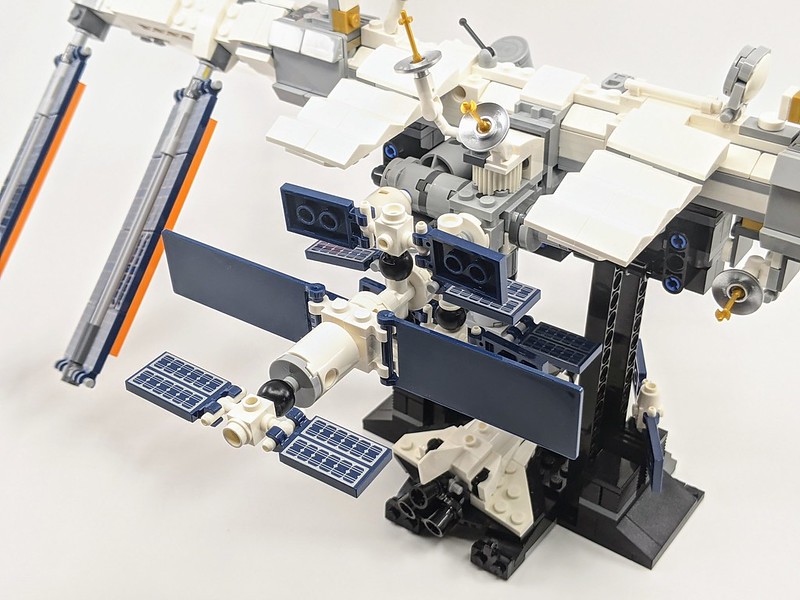 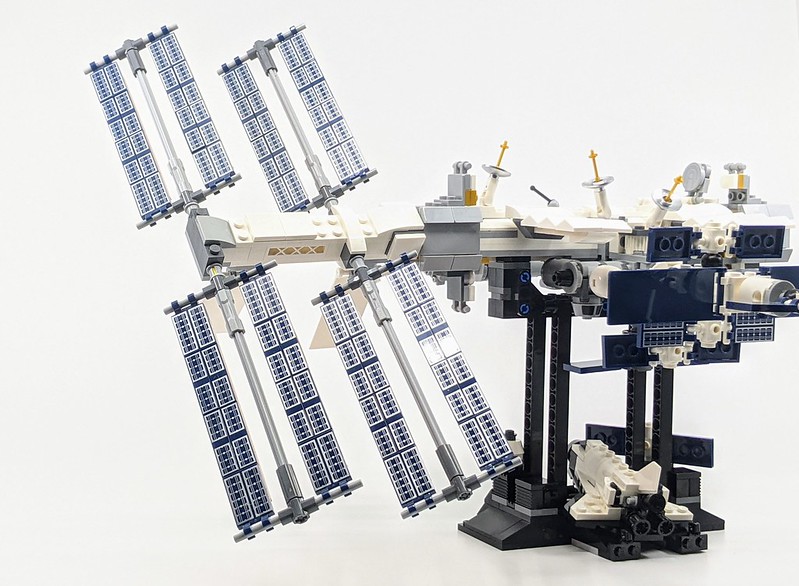 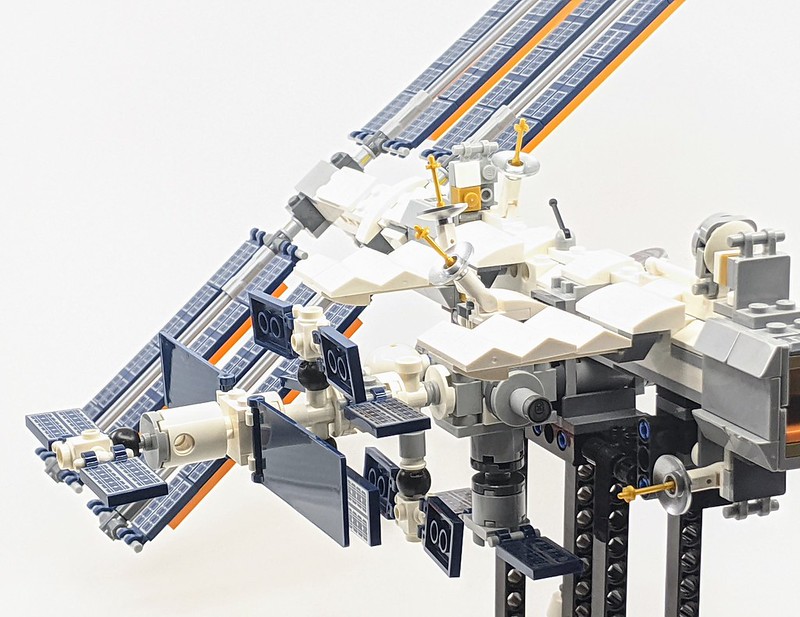 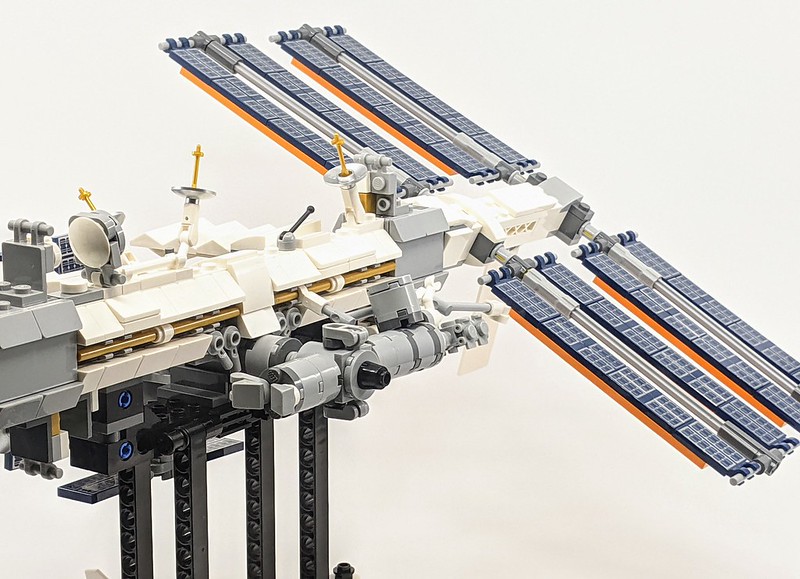 It’s not until you add the two banks of solar panels, does the set really show off it’s visual scale. They almost double the sets length and make its size way more imposing. Each arm features four panels, which are made up of a pair of 2×12 plates. These are clad with a selection of printed tiles to give the impression of solar panels. These are similar to the elements used for the same purpose in the recent LEGO City Mars Exploration sets. They can each be angled and the entire arms can also be twisted to mimic the same motions as the ISS. The set is definitely more suited to display than play, there are plenty things to come away from the set, it someone is heavy handed with it, however most of the smaller bits and pieces stay on quite well. I can actually see this being a great set to use in schools, as it’s built in such a way that it echoes how the actual ISS has been constructed, so would be a great educational tool. 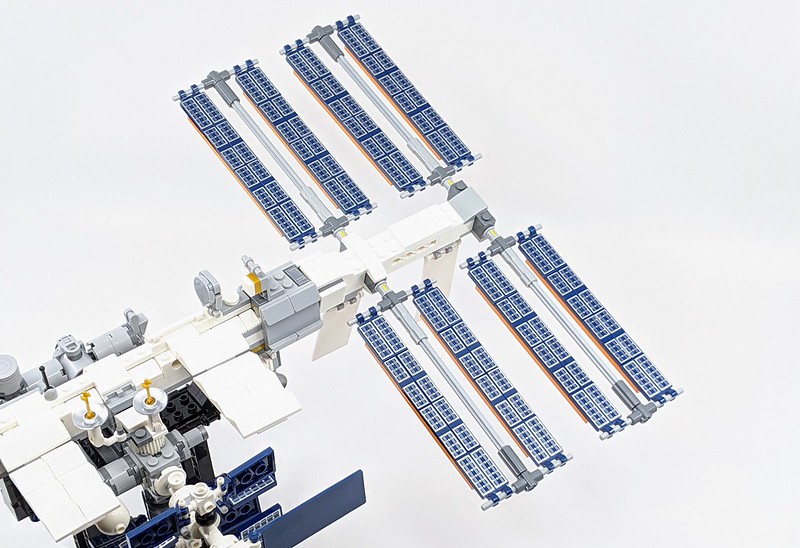 As mentioned above I didn’t really follow this set during its project stages. I have nothing against space-themed sets, however I do feel there are been rather a few sets come via LEGO Ideas. However this particular set is much more intersting than some of the others to make it on to store shelves. Due to the shape of the ISS, I was expecting a set that will come apart merely by looking at it, but to my surprise it is a fairly sturdy build. Sure some of the additional elements like satellites and connected pods can pop off, but you can pick the set up easily enough. I like the addition of the display stand as well. It was certainly required as the set needs to be elevated, but it has also been used to add a few more details such as the space shuttle, micro astronauts and information plate. If you were a fan of the Saturn V, this is the perfect set to accompany it. It certainly doesn’t have the same imposing scale, but it has a impressive visual appeal. Just a quick note regarding the photos, the set was far to big for my normal set up so they are as brilliant as I would like, plus the awkward shape means that it has a great deal of shadows.