LEGO® Ideas has provided us with an array of different sets over years, but science has proven particularly popular with both builders and fans. The ninetieth set to be released as part of the LEGO Ideas range, is another science-focused one, which is similar to the Research Institute released in 2014. Just like that set, 21312: Women of NASA focuses on the females who are leaders in their professional field. This time around the subjects of the set are all real pioneering icons who have had careers with NASA. Between them, they have helped to further our understanding of the galaxy and beyond. LEGO Ideas projects are often fuelled, not only by a passion for building but the subject matter. Science editor, writer and LEGO builder, Maia Weinstock (a.k.a. 20tauri) has combined three of her personal passions when designing the Women of NASA project for LEGO Ideas. Fellow LEGO fans soon helped the project obtain 10,000 votes and after consideration from the LEGO review board, it was revealed that the project would become a LEGO Ideas set. We’ve been very lucky to get an advanced set to take a look at, which is also a nice little milestone for us here at BricksFanz as it’s the first set we’ve received directly from LEGO. So without further ado, here’s the BricksFanz review of set 21312: Women of NASA. 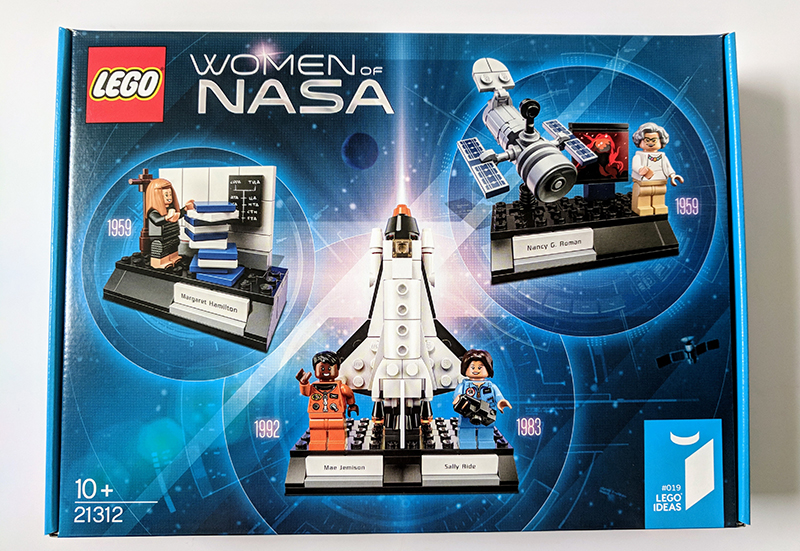 Explore the professions of some of the groundbreaking women in science, technology, engineering and mathematics (STEM) with the LEGO® Ideas Women of NASA set. It features minifigures of 4 pioneering women of NASA— astronomer and educator Nancy Grace Roman, computer scientist and entrepreneur Margaret Hamilton, astronaut, physicist and entrepreneur Sally Ride and astronaut, physician and engineer Mae Jemison—and 3 builds illustrating their areas of expertise. Role-play space exploration from planning to moon landing, beginning with the iconic scene from Massachusetts Institute of Technology in 1969 of Hamilton with software that she and her team programmed. Build the posable Hubble Space Telescope and launch a LEGO version of the Space Shuttle Challenger with 3 removable rocket stages. The set also includes a booklet about the 4 featured women of NASA, and the fan creator and LEGO designers of this fun and educational set. 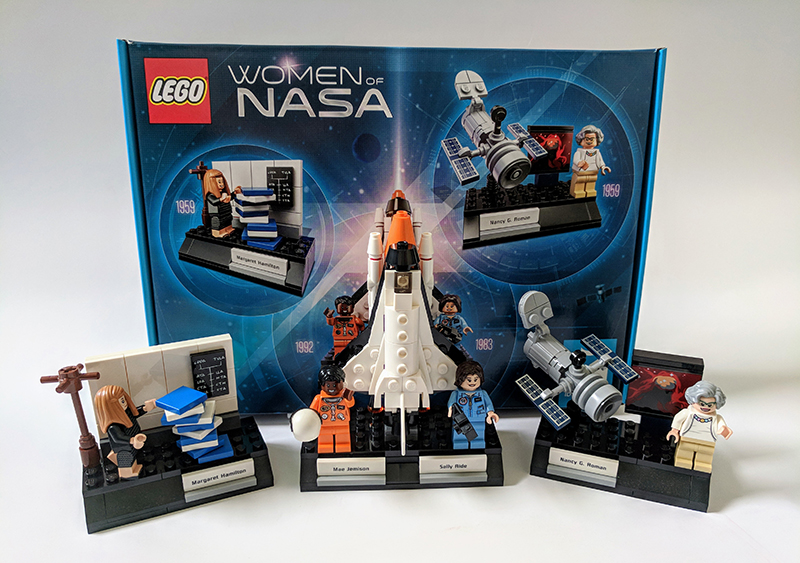 One of the neat features of all LEGO Ideas sets is the instruction booklet, of course it provides the all important build instructions, however they also include some additional information about the fan builder and LEGO Designers who worked on the set. It’s genuinely interesting to get these behind the scenes snapshots, even more so in LEGO Ideas sets. The particular booklet also has details of the four women, who are the subject of the set. This helps explain their roles at NASA and the pioneering work they did to further humankinds discovery of the galaxy around us. 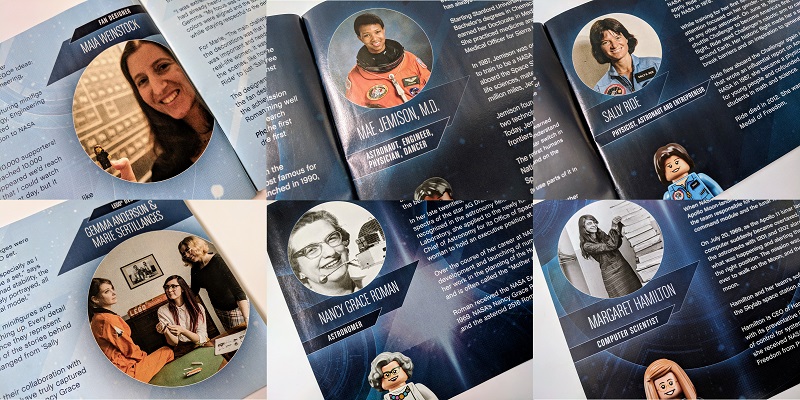 For those enjoy building LEGO in the purest way, the bags of elements are not numbered, so you can tip them all out, into the top-opening box and have a good rummage for pieces as you build. The set itself is split into three separate dioramas, each of which focus on different aspects of NASA. The first of which is computer scientist Margaret Hamilton, captured which her masses of files which helped create the software that land man on the moon. The set is built upon a largely black base, with a 1×4 section at the front to display a nameplate. 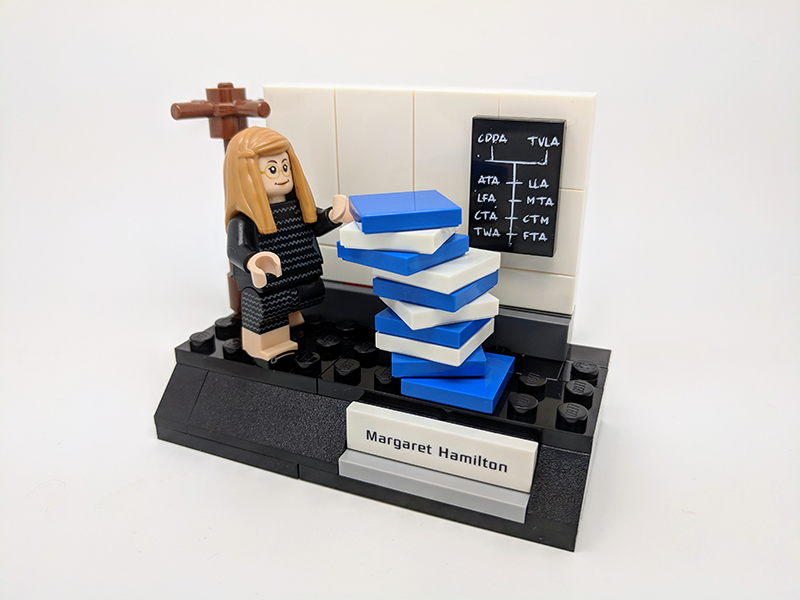 A few flat white plates clip into the base to form a wall, which is adorned by a chalkboard tile. The whole thing is brought together by a pile of single stud topped plates stacked together to recreate that famous pile of papers. Which can be stacked at a jaunty angle, in fact the diorama does a pretty good job of recreating that iconic of Margaret, right down to the coat stand. 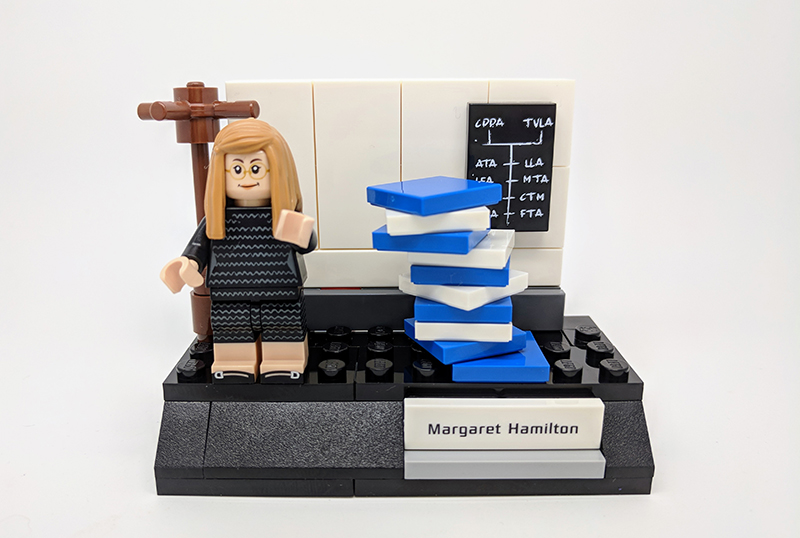 The biggest of the dioramas focuses on astronauts Mae Jemison, M.D. and Sally Ride. The same style black base, forms the basis of the set. This is a little larger than the other two featured in the set, but again has space for names to be displayed. The highlight of this section is the mini space shuttle, in fact it’s the best bit of the whole build. A nice selection of parts are used to create the main body of the shuttle, this is joined by the external fuel cell and addition booster rockets. 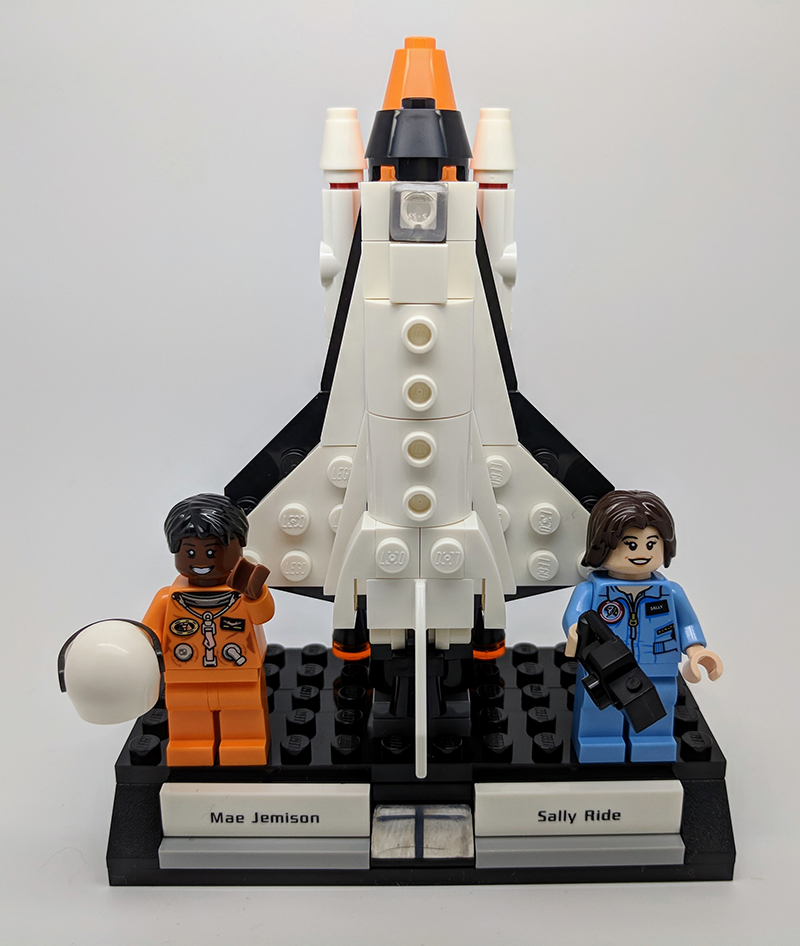 Considering its miniature size, it’s impressive in detail and is instantly recognisable as the world famous retired NASA space shuttle. What’s really nice is the way the shuttle is mounted. It sits upon a undercarriage element, which is a great way to get the shuttle connected to the base in an upright position but does also mean it can easy come away from the base. Not so much a problem if the diorama is displayed and not overly handled. 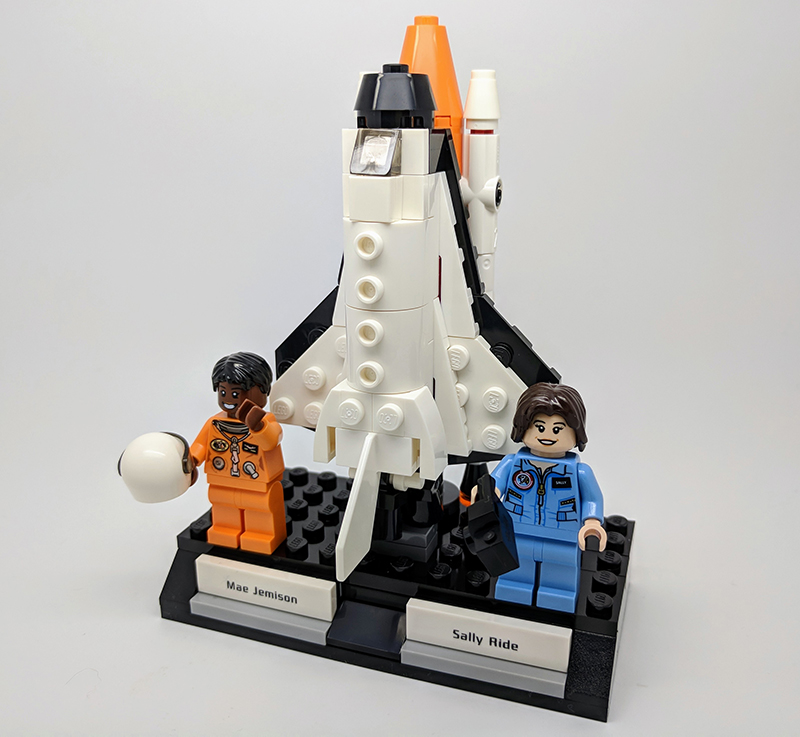 The final diorama features astronomer Nancy Grace Roman, her discovery helped her to become the first woman to hold an executive position at NASA. Her work helped to create the Hubble Space Telescope, a valuable piece of NASA equipment which is still in orbit today. This unique research tool form the main focus of Nancy’s diorama. One thing which always impresses in a LEGO set is the use of parts, in particular unique pieces which are used in fun new ways. So the use of a dustbin element to form part of the Hubble Telescope is genius. 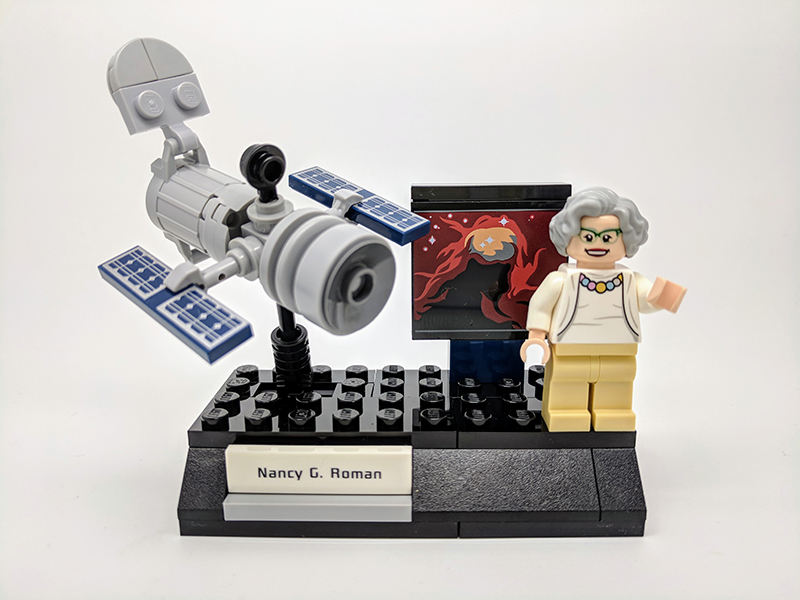 In fact the telescope is neat little build, all the more impressive considering it’s all of it anchored by a single 1×1 brick with knobs. The telescopes solar panels are created by two printed 1×4 plates. As you build the base section, you’ll notice a odd little section which sticks up through, this is used to mount the telescope unit and can also be angled. Despite only be connected by a rod element it’s quite sturdy. 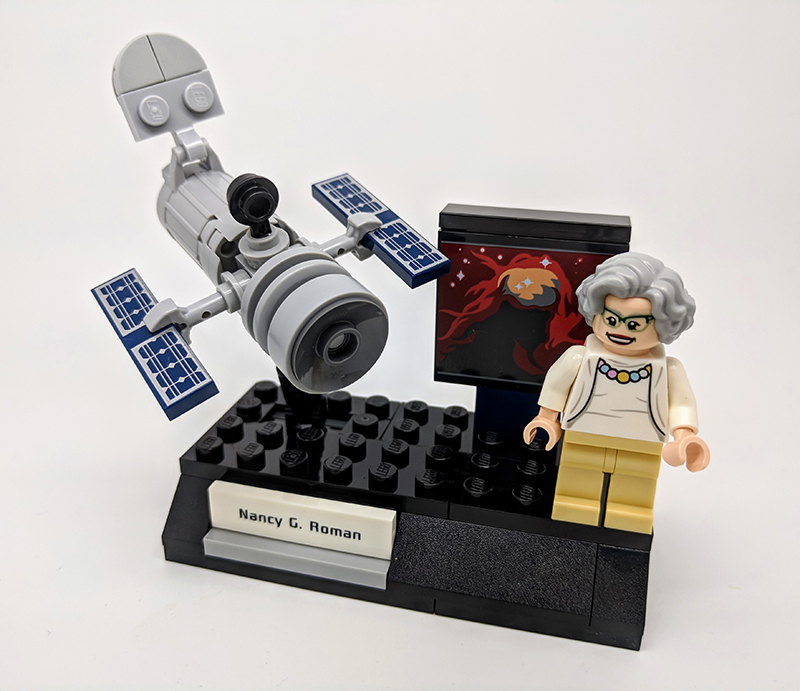 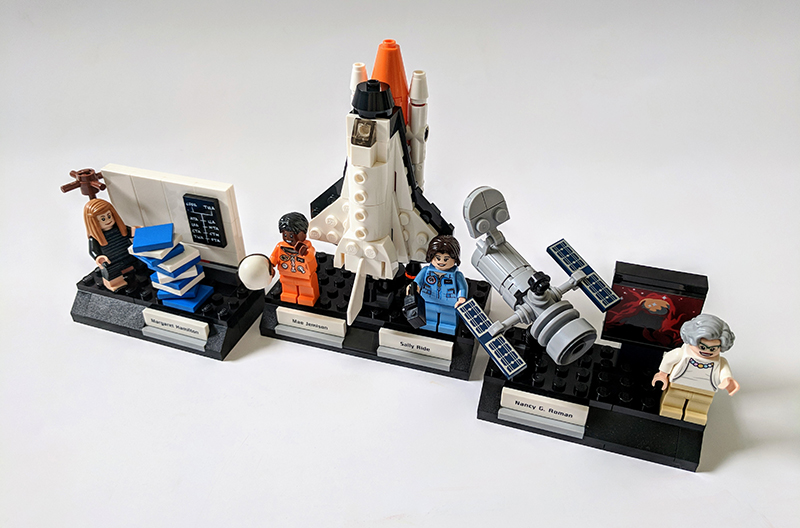 The set features a number of elements with have graphic detail upon them, but there isn’t a sticker in sight. Each of the elements below all feature print detail. This is certainly a welcomed choice, although some stickers in sets really can’t be helped, there have been sets which clearly could of had print detail over stickers. Thankfully that hasn’t happened here and certainly helps to make the set a little more visually clean, especially something as simple as the name plates. 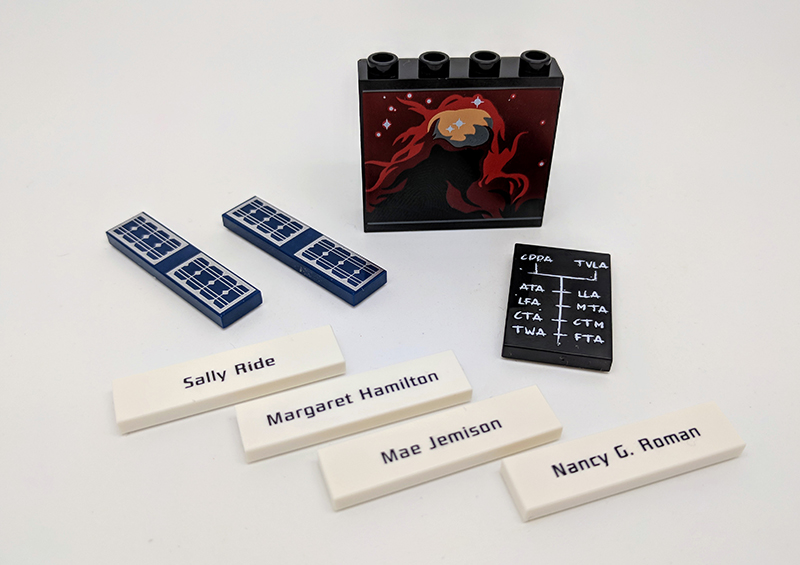 The set includes four minifigures all of which are based on real life people. These iconic women have all helped to further space exploration and the sciences, by breaking the mould and going against the norm.

Nancy had amazing career at NASA and her minifigure is portrays her well. Although torso print detail is minimal it’s in keeping with actual person. The use of the fairly rare hair element helps to give the minifigure some character as does the double-sided head element, with different expressions on each side. 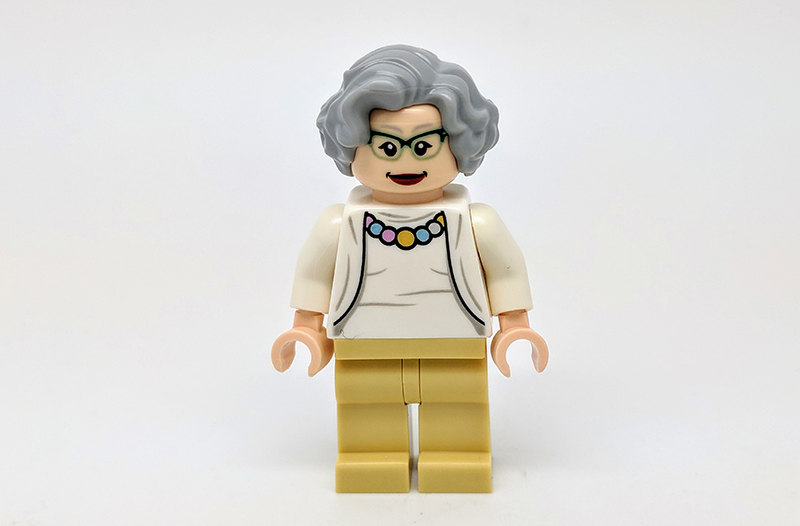 Unlike Nancy, Margaret Hamilton is featured in a rather famous photograph. Not only did that image inspire the diorama, it also influenced Margaret’s minifigure. Her wavy black dress is nicely achieved thanks to the use of the new dual-moulded legs. Admittedly in the image below it make it look like shorts but the gap isn’t so prominent when you look at the actual minifigure. 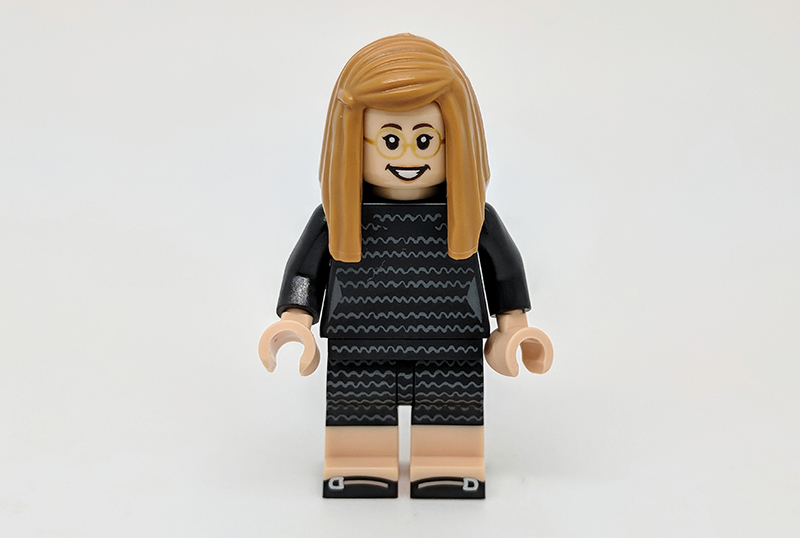 The final two minifigures are kitted out in more familiar outfits, as both Mae and Sally are wearing their astronaut flight suits. Although these are instantly recognisable, I’d of like to have seen a little more detail on the arms of both minifigures, space suits are adorned with various patches and badges, which are missing here. 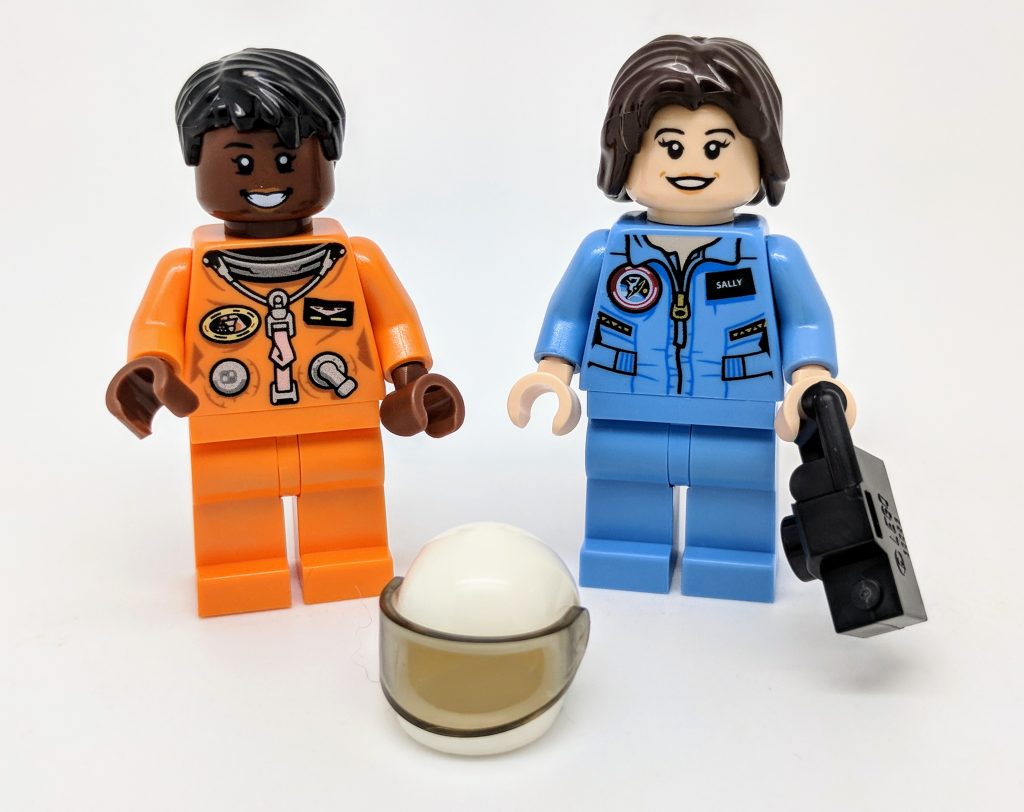 However both minifigures do a good of capturing the likeness of both women. They are also the only two minifigures to include accessories with Mae, coming complete with a space helmet and Sally, a camera. Both have double-sided faces. They are only let down by the lack of addition details on the arms and legs. 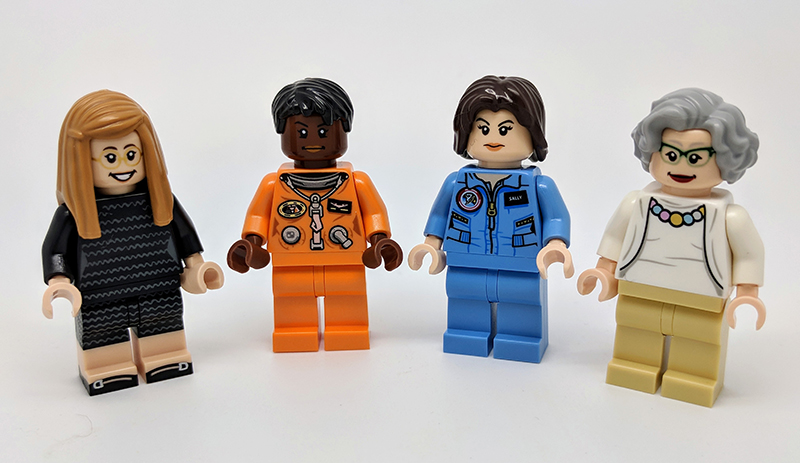 It may not be a large scale set and it won’t take you ages to build, but it that doesn’t really matter, it’s what the set represents which is the greatest appeal. Something that was clearly evident during the projects voting stage. LEGO did come under a little criticism when they released set 21110: Research Institute, when some suggesting it was a merely a way of answering the ‘lack’ of gender diversity in LEGO sets. This set hasn’t been met with the same negativity and will only help to inspire the younger minds to take the same stride as the women celebrated in the set. After the huge success of the Apollo Saturn V and the Old Fishing Store, this set may feel a little underwhelming, however at just £19.99 it’s a nice little set to add to your collection and one that wouldn’t look out of place in classrooms. 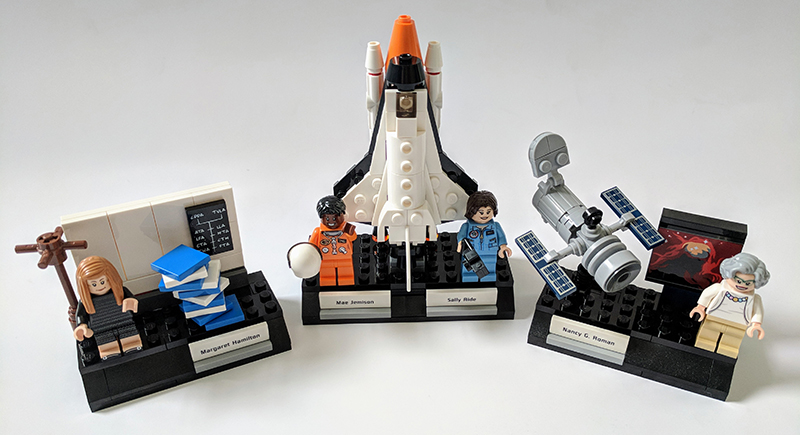 LEGO Ideas set 21412: Women of NASA will be available worldwide from November 1st on shop.LEGO.com, LEGO Brand Stores and selected retailers. You’ll also be able to get the set early from the LEGO Brand store, 5th Avenue, New York. Thank you to the LEGO CE team in Billund for sending us this set to review, the opinions expressed in this set represent that of our own and not The LEGO Group.