Since introducing a range of sets for younger builders previously known as Juniors, the theme has changed a little to simply be easy-to-build sets within other themes dubbed 4+. Regardless of how they are marketed, 4+ sets have been the source of some unique licenses and in turn some often unique characters. After The Incredibles, Toy Story and Mickey & Friends it’s the turn of Marvel and the Disney Junior series, Spidey and His Amazing Friends. These brand new superhero-themed builds may offer simple builds for younger fans but they also include unique versions of Marvel characters as well as some great printed pieces. So here’s a look at the Spidey & His Amazing Friends set, Hulk vs. Rhino Truck Showdown. 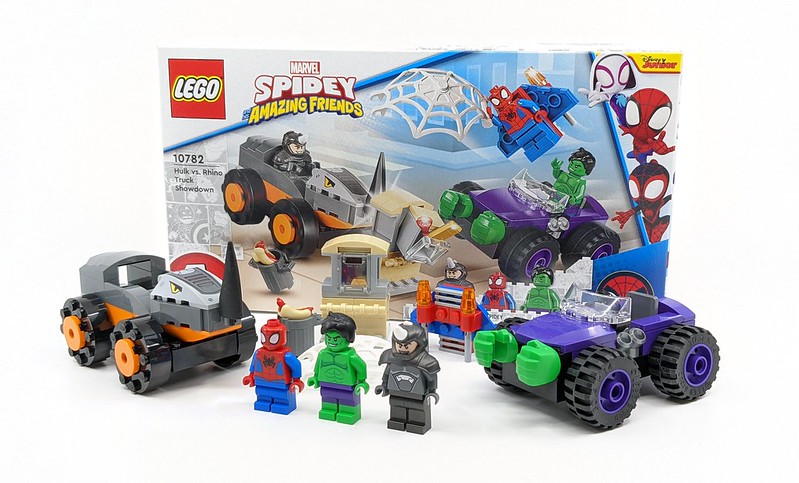 The LEGO® Marvel Spidey And His Amazing Friends Hulk vs. Rhino Truck Showdown (10782) building toy puts Super Heroes aged 4 and up in the driving seat as they race to save the day. Kids recreate scenes inspired by the popular Disney+ TV series as they help Spidey and the Hulk thwart Rhino’s bank heist. Kids will love the battle wagons in this collectible, buildable toy set. Each monster vehicle features cool details – Rhino’s truck has a ramming horn, while Hulk’s has a pair of massive fists ready for smashing combat.

I’ve built a surprising amount of 4+ sets for someone way over the suggested age range. It’s clear they aren’t going to offer an immensely in-depth build experience so reviewing them can be a little difficult. But the set comprises of two vehicles, each themed around the sets title characters, namely Rhino and The Hulk. To my knowledge, neither Hulk nor Rhino has such vehicles in the Disney Junior show, but they make sense in the concept of the show. In many of the Spider-Man-themed animated shows, Spider-Man seems to have a wealth of gadgets and a hideout that could give a certain bat guy a run for his money.

Both vehicles use a starter brick as their base, this is a key feature of the 4+ sets as they help to simplify the build experience for younger builders. They are then kitted out with standard elements to create the body of the cars. Hulk’s is a mix of black and purple elements, with a cool little windscreen but the best feature is a pair of green fists mounted to the front of the car. These are the same as those used on the Hulk BigFigs. They are super cartoony but that adds to their charm. 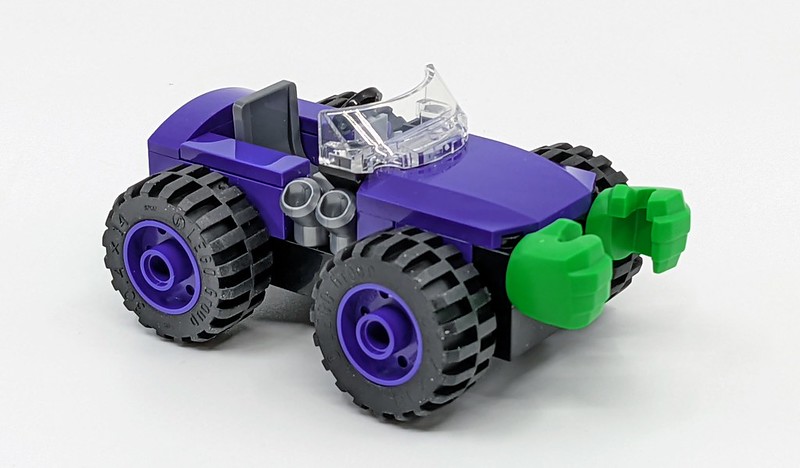 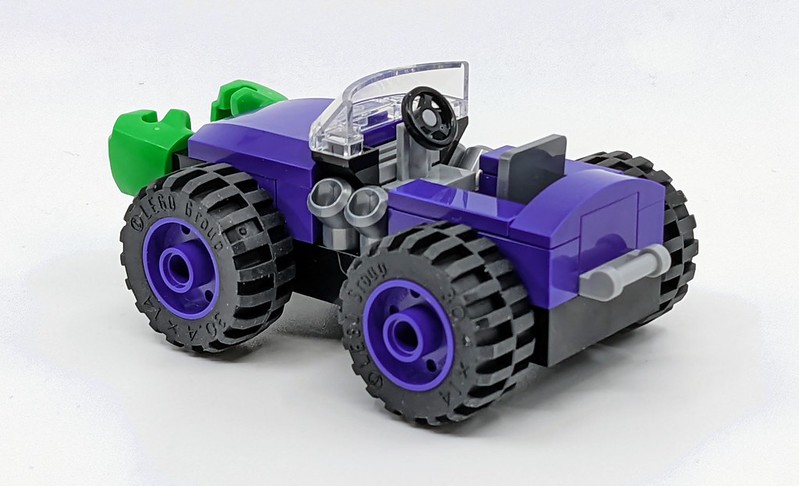 Rhino’s truck is unsurprisingly inspired by the creature of the same name. The orange and grey colour scheme is a nice counterbalance to that of the Hulks. The back uses one of the stepped plate elements which kind of looks like the tough armed skin of a rhino. If the animal inspiration needed any more reinforcement, the front of the truck represents the iconic horned head of a rhino. This is where another unique feature of the 4+ sets comes into play. The slopes section of the head is printed, although it doesn’t look much like any rhino I’ve ever seen. The rear of the truck features a simple slot in which you can pop in a safe. 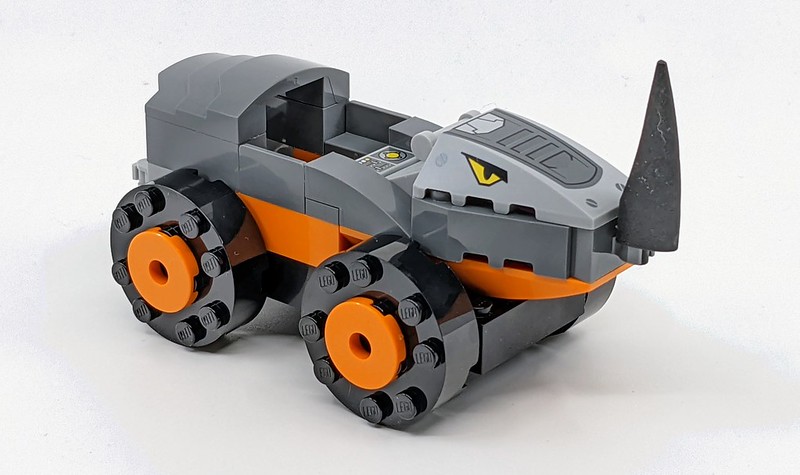 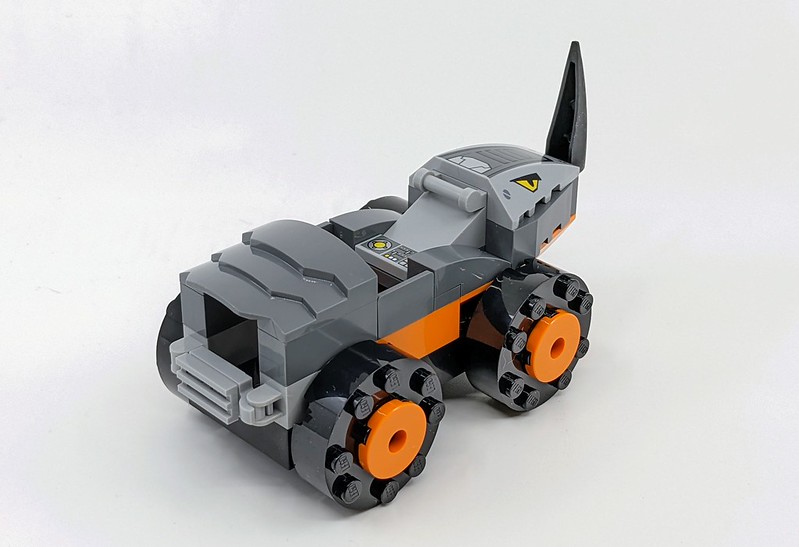 As well as the two vehicles there is a simple display stand, featuring a safe, which can be slid out. There’s also a jetpack for Spider-Man to use, despite the fact he can swing around on this webs. Speaking of webs, the set includes a brand new-for-2022 element which is a sort of web canopy. This has a bar on one end and a pair of clips on the other. Making this an interesting piece to use elsewhere. 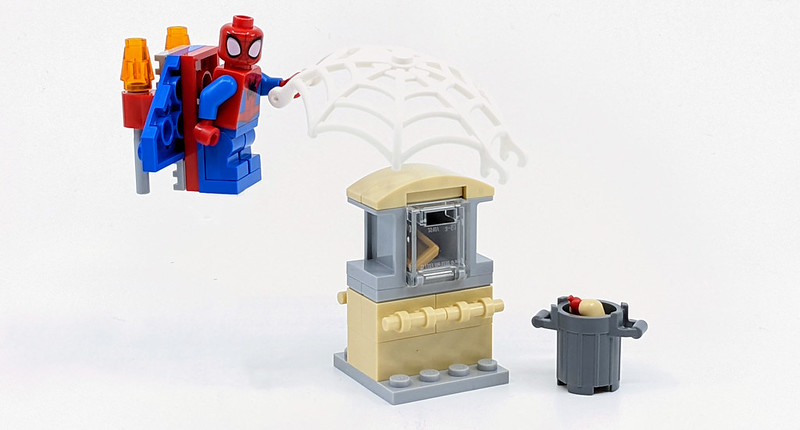 The 4+ may not be aimed at AFOLs but the Minifigures sure are. The set features three characters from the animated show. Spidey is the most common as he features in a couple of the other new sets. His suit and overall style is inspired by the cartoon, with bigger eyes, a more simplistic outfit and shorter articulated legs. 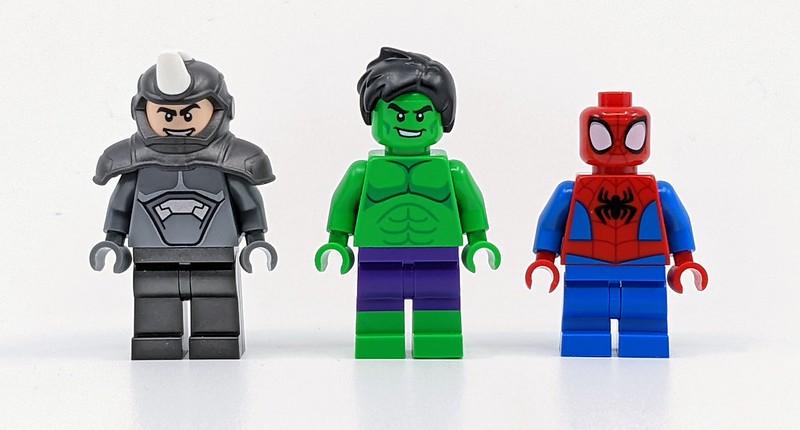 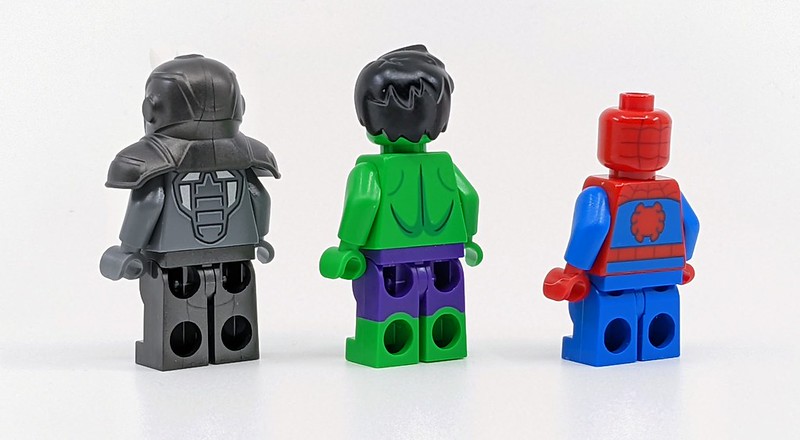 The Hulk has appeared in a number of sets, but as a BigFig, he’s only found in Minifigure form in three other sets, with two of them being promotional polybags. That makes the version in this set unique as it’s the first to use dual moulded legs as well as having a brand new hair element, along with a unique head and torso. 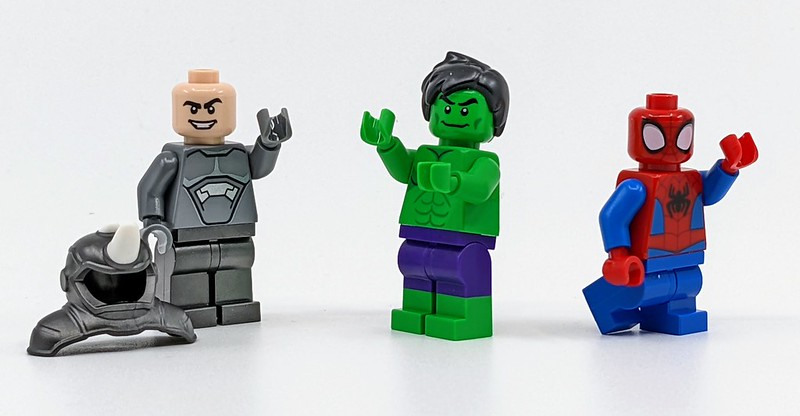 Finally, Rhino makes his first proper Minifigure appearance. Rhino is one of Spider-Man’s many foes, his only other LEGO outing was in a set loosely based on The Amazing Spider-Man 2. Here Rhino appears in a mech suit. The Rhino has the character as a standard Minifigure but does use a new element to create his horned helmet. Of course, Rhino would look ace as a BigFig but for a set aimed at a young fanbase, the fact it uses a new part is impressive enough. Below is a comparison with the other versions of both characters. 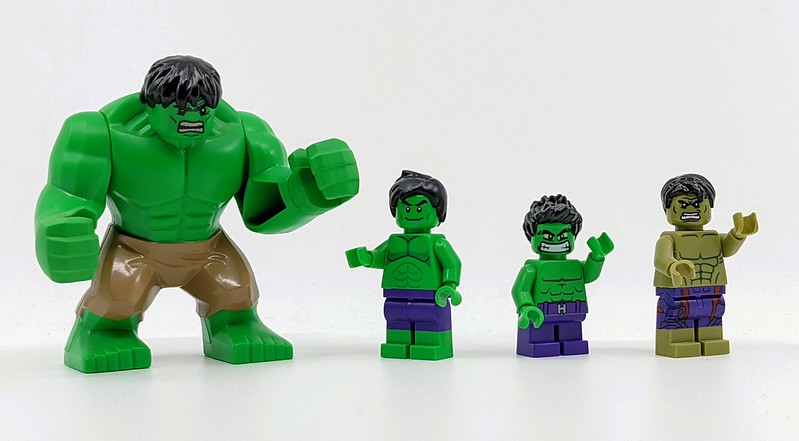 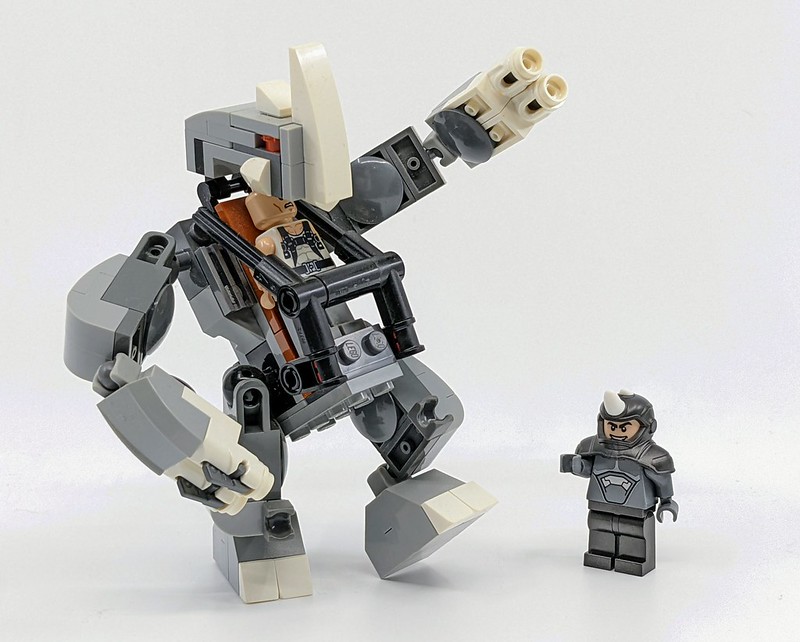 Despite the simple builds, the set has a trio of great Minifigures. The 4+ continues to impress by offering unique versions of fan-favourite characters.