The large-scale LEGO® vehicles line began back in 2008 with the advanced model version of a VW Beetle. But it truly gained traction with the VW Camper Van, released in 2011. Every set, which has followed since has maintained a similar style of build and level of detail. They have also flipped between iconic automotive brands and vehicles inspired by the movies. The latest to join the line-up is inspired by General Motors Chevrolet brand and its Camaro Z28 model. After the brand first appeared in the Speed Champions theme, it’s now inspired the latest large-scale LEGO ICONS set. With the set due to hit stores on August 1st, here’s an early look at the set.

Ready to push the limits of performance and style? Then start your creative engine. It’s time to pay homage to a vintage classic with this Chevrolet Camaro Z28 (10304) building project for adults. Take your time. This is an experience to savour. Make your choices. Create your perfect model. Then place on display to admire the impressive looks of an iconic car.

Highly customisable
Just like the classic 1969 Chevrolet Camaro Z28, this highly accurate collectible LEGO® model car comes with a host of options so you can personalise your car, your way. With the roof or convertible? Classic or hideaway front headlights? White, grey or red racing stripes? The choice is yours. But this car’s impressive looks are just the start. Authentic features include a detailed V8 engine, working steering and opening doors, plus opening bonnet and boot. 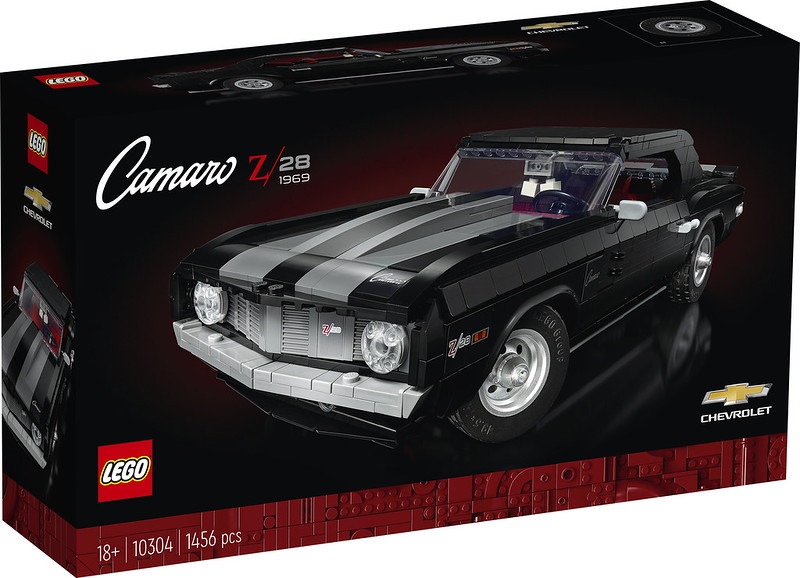 The Chevrolet Camaro was introduced by General Motors in the late 60s, where it was intended to be a competitor to Ford’s Mustang muscle car. The Z/28 model offered a greater performance package to the Camaro, allowing it to compete in the Trans-Am Series. The Z/28 also introduced the iconic ‘skunk’ strips, which play a key role in the LEGO version of the car. It hasn’t really had an impact on popular culture as other LEGO vehicles have, but a yellow version of the ’76 Camaro was featured in Transformers, in which Bumblebee took on the form of the car along with a more modern version. 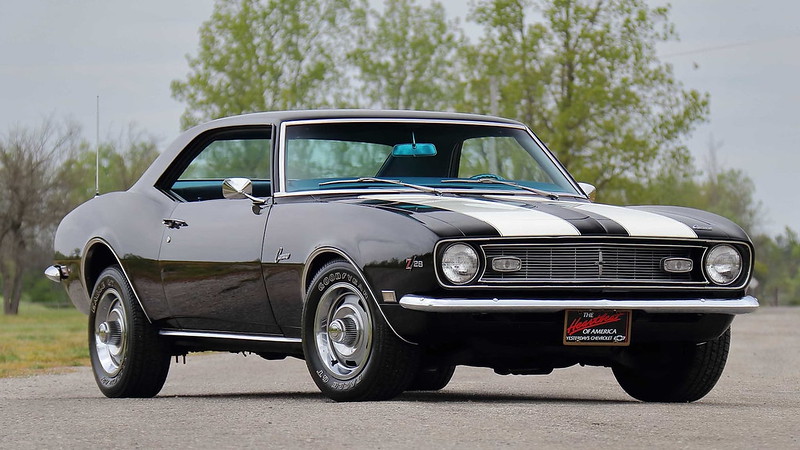 The build of the car is rather similar to previous large-scale vehicles, but the base largely shuns Technic elements in favour of standard LEGO bricks and plates. Because of this, there isn’t a crazy gear system to build, only a simple mechanism at the front of the car, which connects the front wheels to the steering wheel. Other ‘working’ aspects of the car include the doors and boot being able to be opened. Along with the bonnet, where you can access the engine. One of my favourite parts of the set is the front and rear ends. Even if you have no knowledge of the car which has inspired the set, the way in which these sections have been created and the detail they convey is very cool. 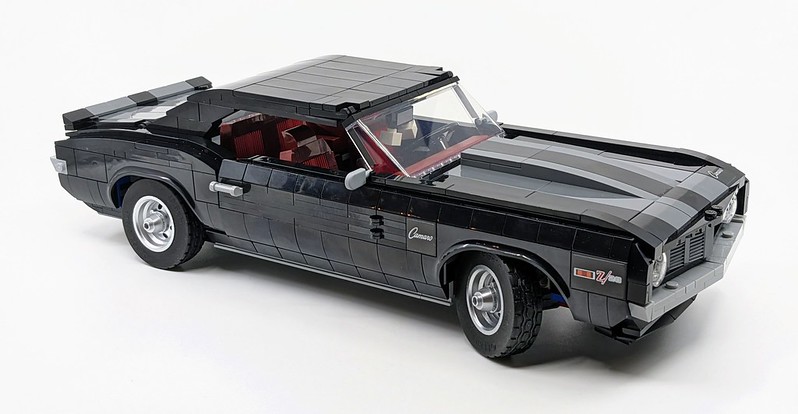 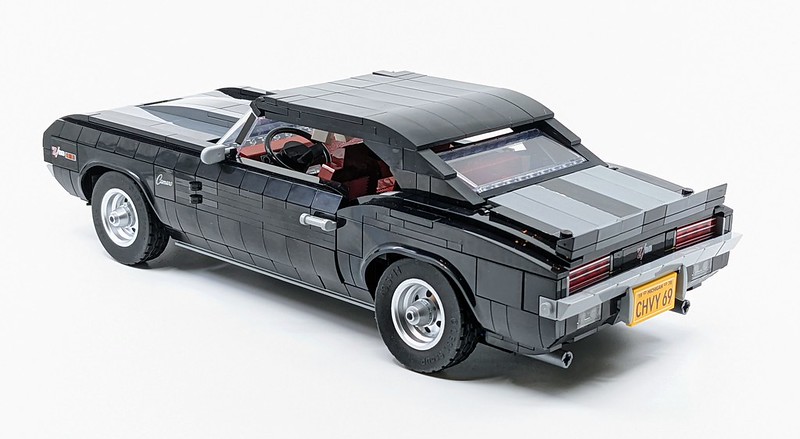 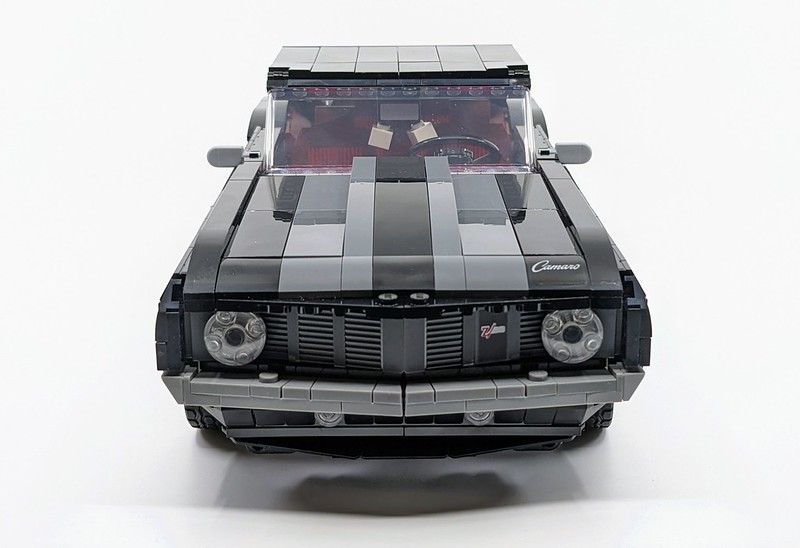 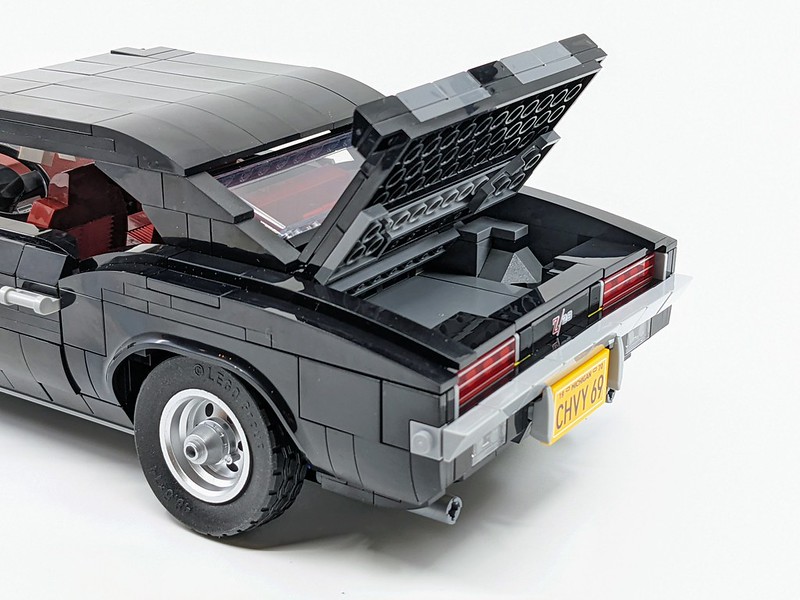 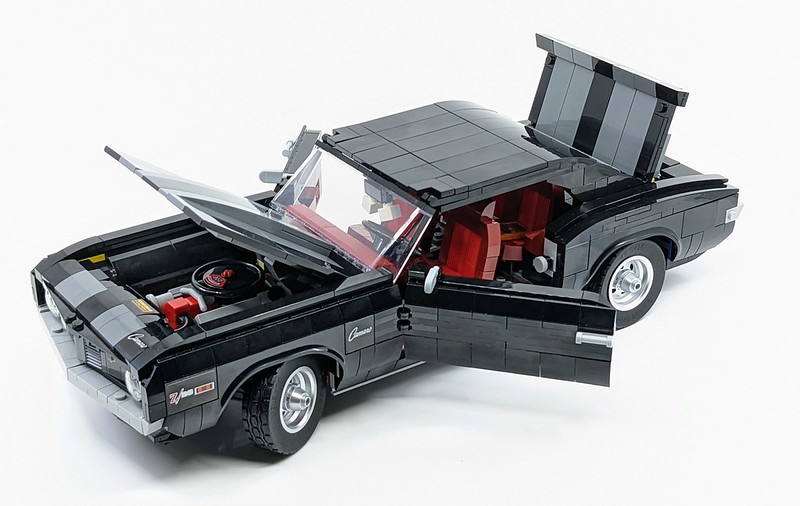 The interior of the car is nicely done, if you’ve built a similar scale car, then the seating is pretty much achieved in the same way. The two-tone red colours of the interior complement the darker exterior quite nicely. A fun little Easter Egg can be found on the back seat, where a magazine sits featuring the Model Team Hot Rod. Under the bonnet, you’ll find a nicely detailed engine. The Camaro is famous for its V8 engine, which is unusually housed in a red casing. Considering it’s been recreated on a much smaller scale, it’s perfectly captured the appearance of the real engine. 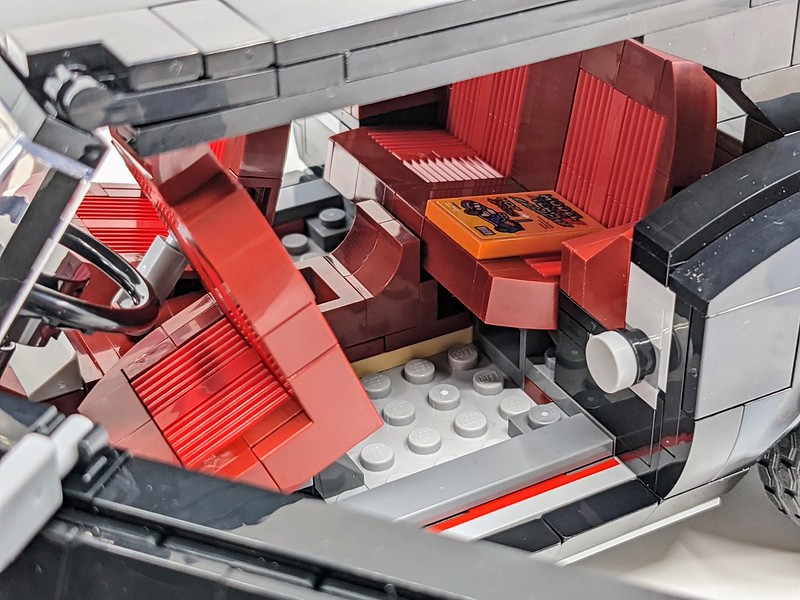 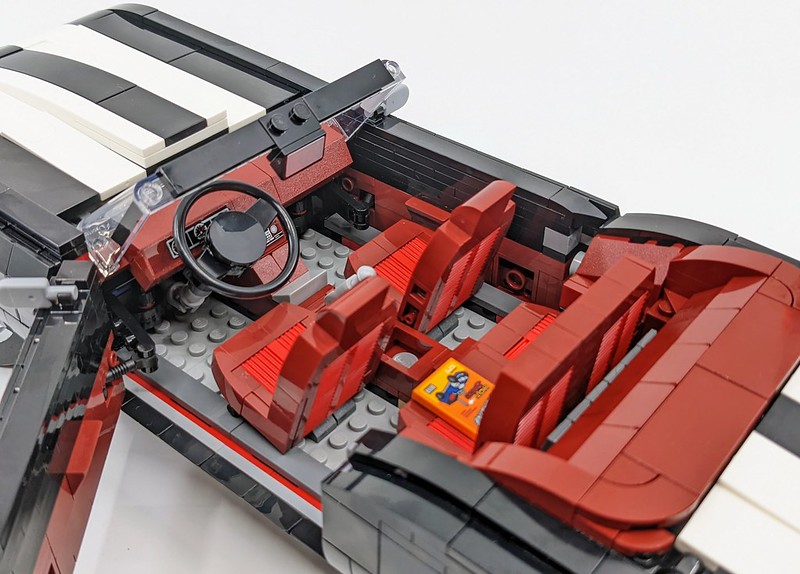 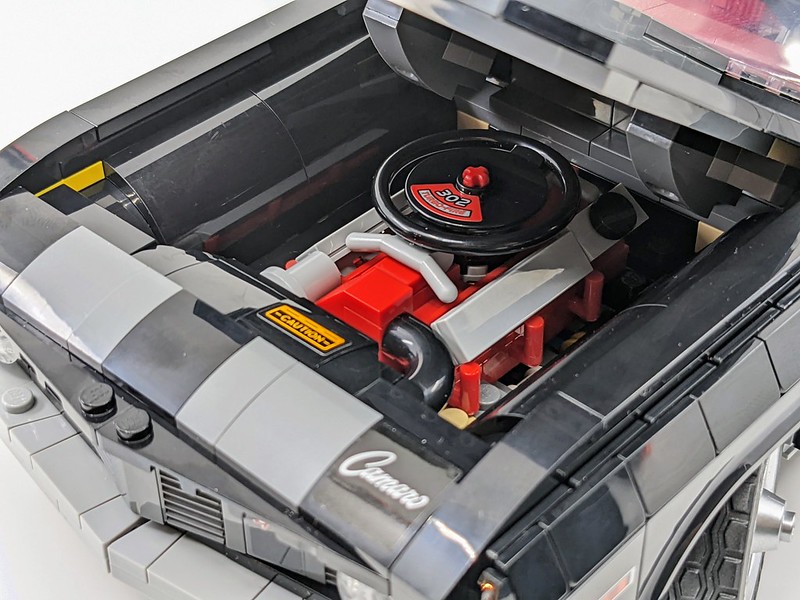 Although the set doesn’t have too many crazy build techniques it does have a couple of fun use of parts. There are a couple of recoloured minifigure fire axe elements are used to frame the rear license plate, which can also be swapped for an alternate plate. There’s also a pair of ice lolly elements recoloured in grey and used as wing mirrors. They definitely create authentic detail and with pieces, you wouldn’t expect to be used in the way they have. 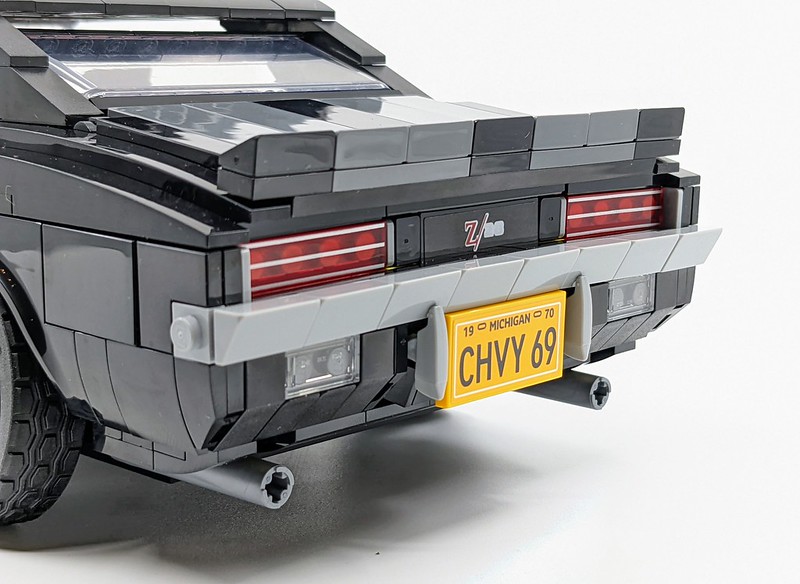 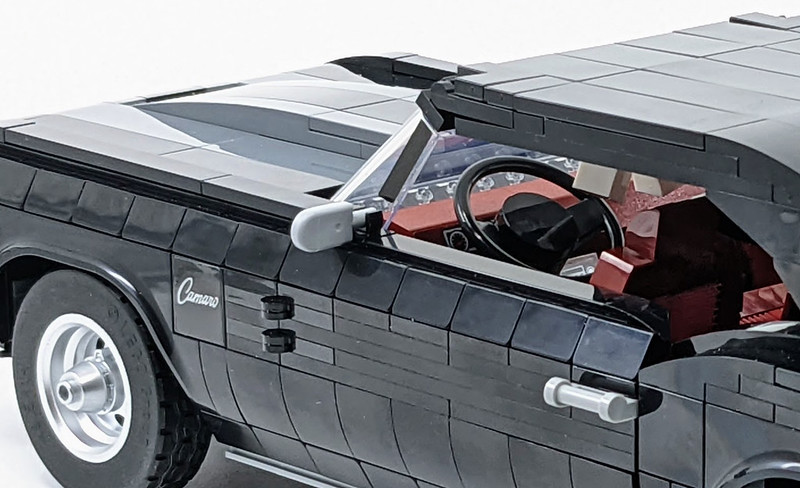 The standard model gets you to build a car, with the grey skunk strips, roof and headlights. All of these elements can be adjusted to provide different levels of customisation. So the grey strips, which run along the entirety of the car, minus the roof, can be swapped with white or red elements. There are three sections which need to be rebuilt to achieve this. They include a small sloped section on the bonnet, the actual bonnet panel and the rear boot panel. It’s simple enough to change these pieces around. The headlights can be popped off and replaced with printed plates to give the car the hideaway headlights. Changes these are a little more tricky. 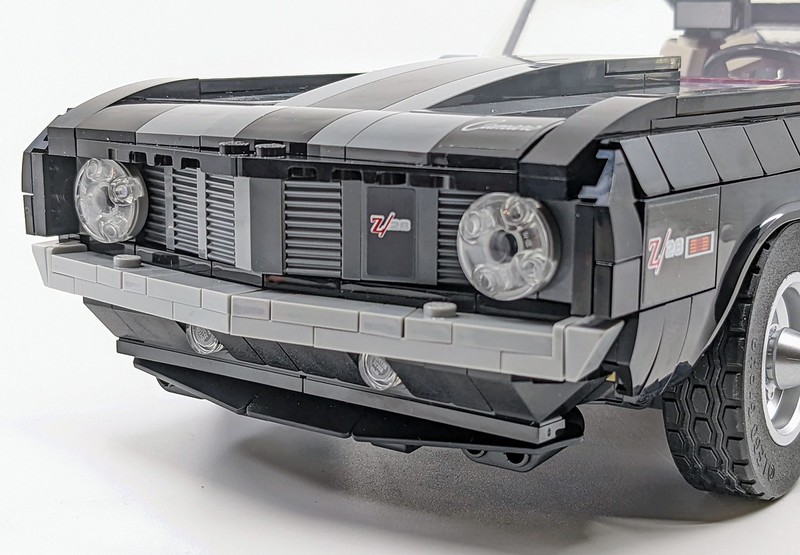 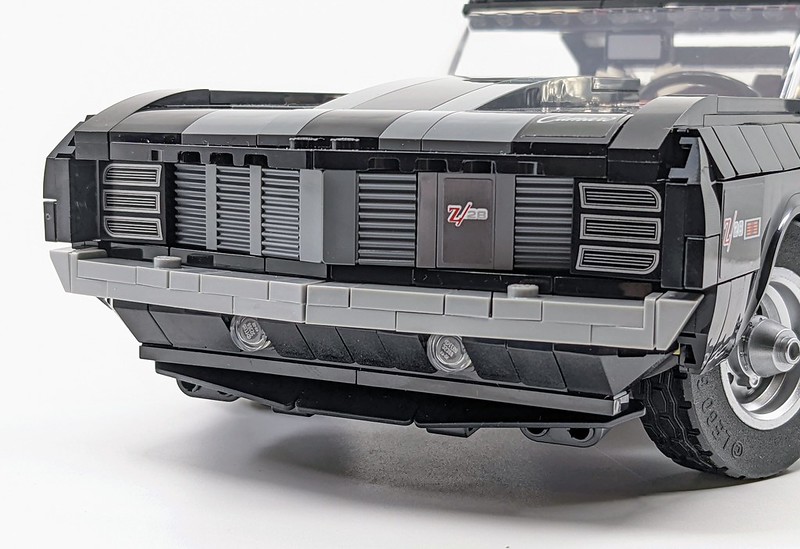 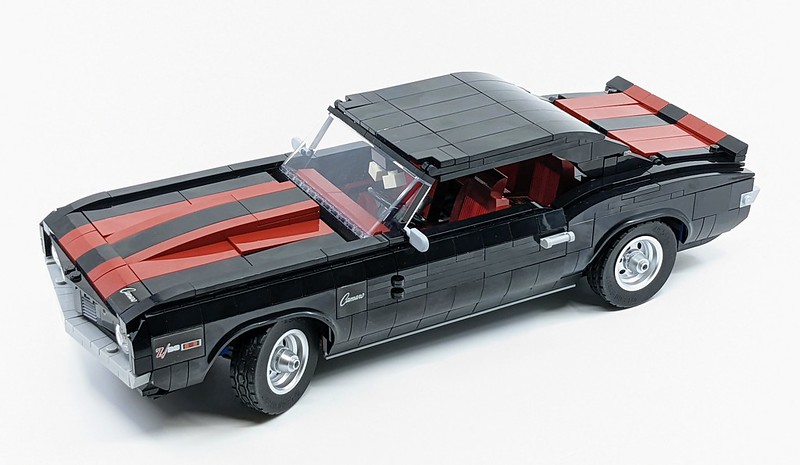 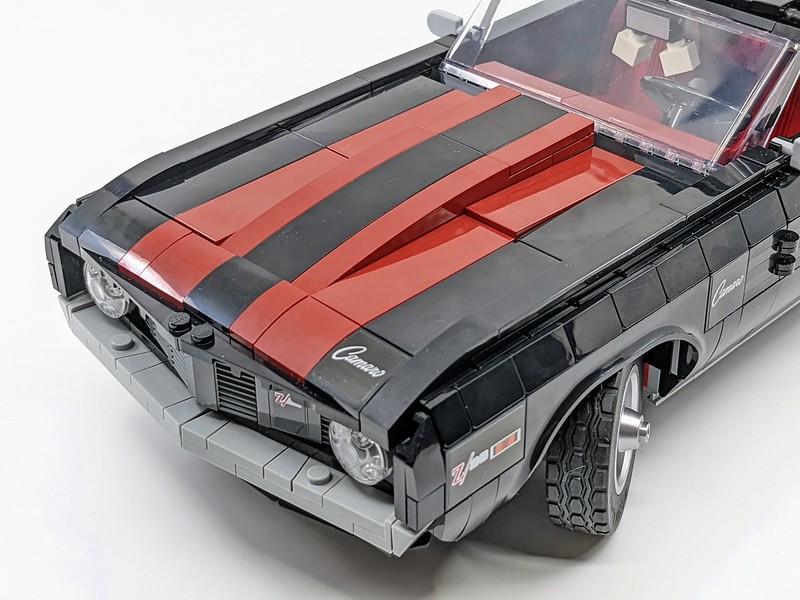 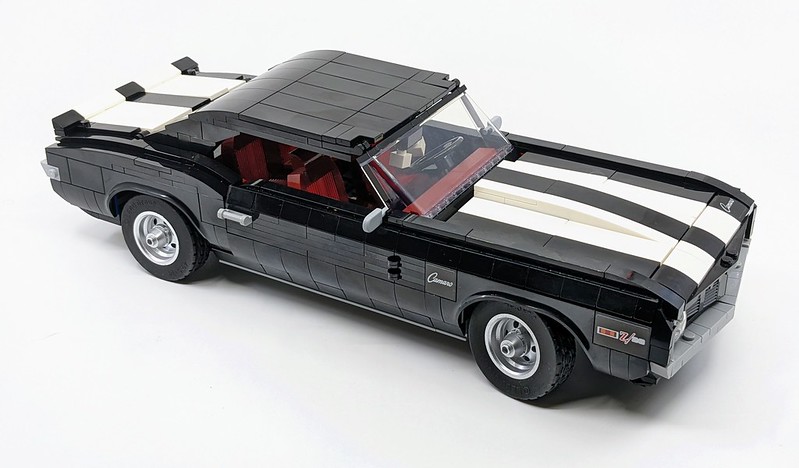 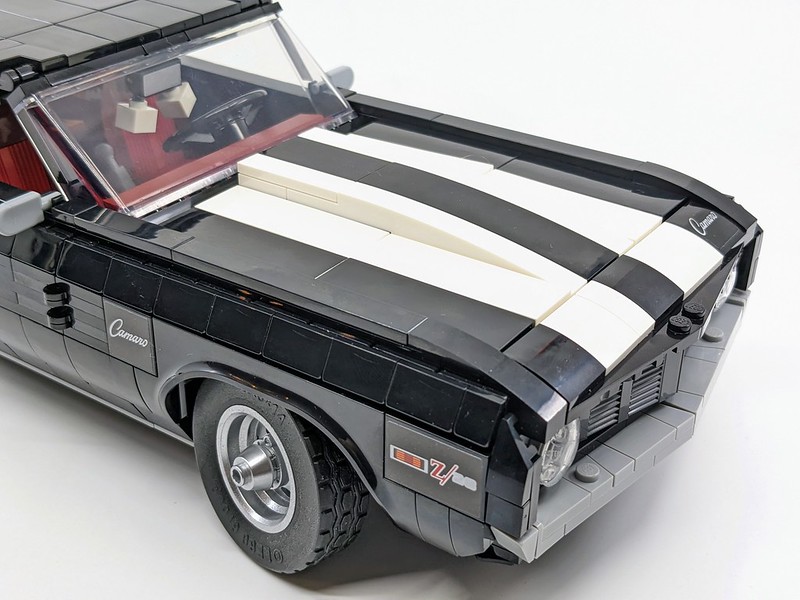 But the biggest level of customisation is turning the base model into a convertible. There is a point within the instructions where you either add the roof or turn the car into a convertible, it does make a big difference to the build experience. Obviously, the roof extends the build a lot more than without it. With no roof, there is a slight change to the front windscreen and the complete loss of the rear window. It also gains an extended section to the rear seating. One thing I would have appreciated would but a guide to switching out the roof section. In other words, a deconstruction guide to getting the model back to the point in which you can choose which version to build. Although it could be considered quite easy to decipher what needs to be removed to add the alternate sections, there are a couple of elements which are a little more difficult to tell if they need to be moved. 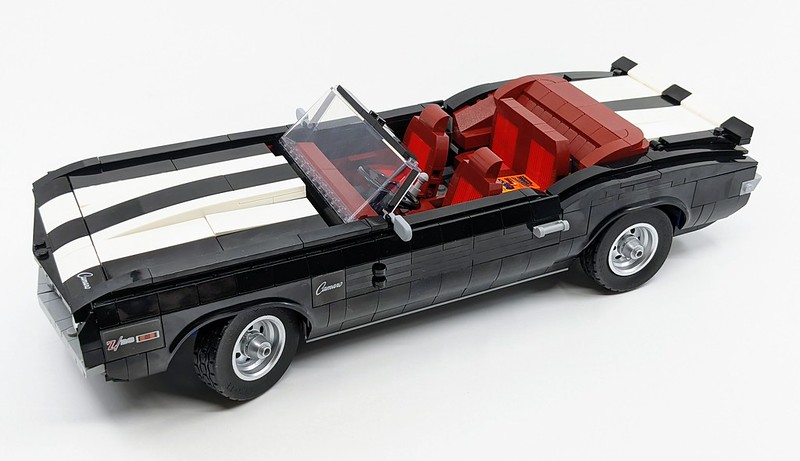 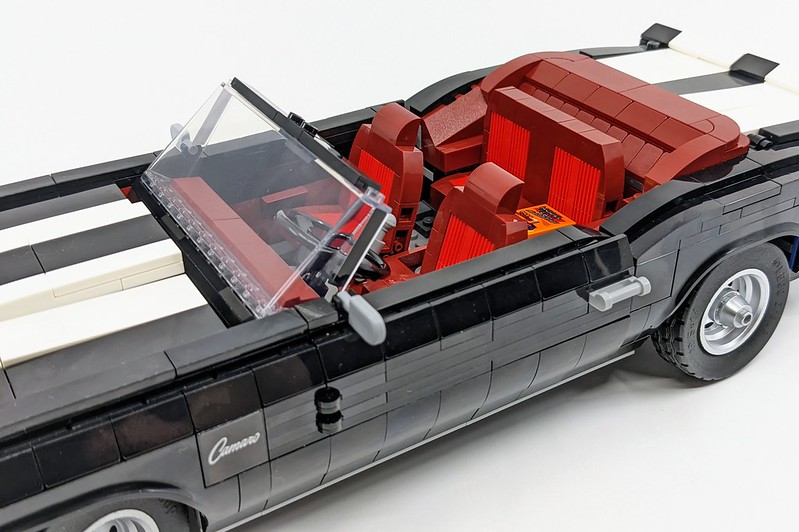 It’s an interesting set to build, especially thanks to the use of unusual elements and by offering a high level of customisation. Not only can the racing stripes be switched out, but you can also have it become a convertible along with switching the headlights and number plates. I just think it doesn’t have the mass appeal of past sets. It’s not really appeared in popular culture, beyond Transformers, and even then it was a completely different colour. However, it has managed to capture the elegant shape of the real car and many of the features which make it unique.