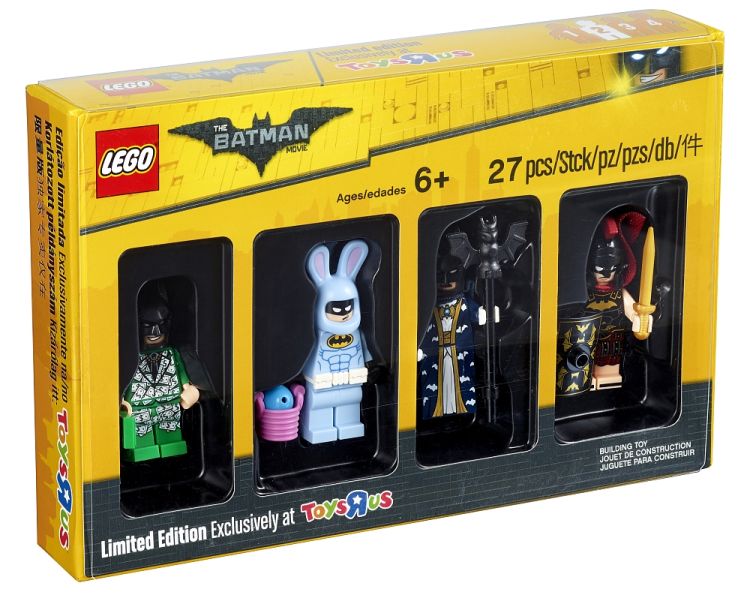 Enjoy exciting, new adventures with this exclusive LEGO Minifigure Collection Batman Movie 4 pack! This pack features Batman in various forms from the Lego Movie! Great for LEGO collectors! Each beautifully crafted minifigure comes with one or more accessories. Which character will be your favourite? 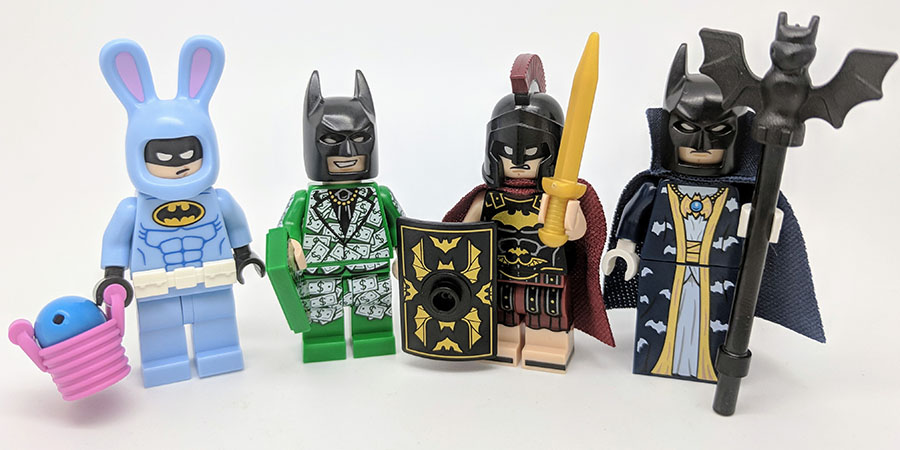 The LEGO Batman Movie Minifigure pack includes four different minifigures each of which are exclusive and not found anywhere else. Each also includes relevent accessories for the different batsuits. 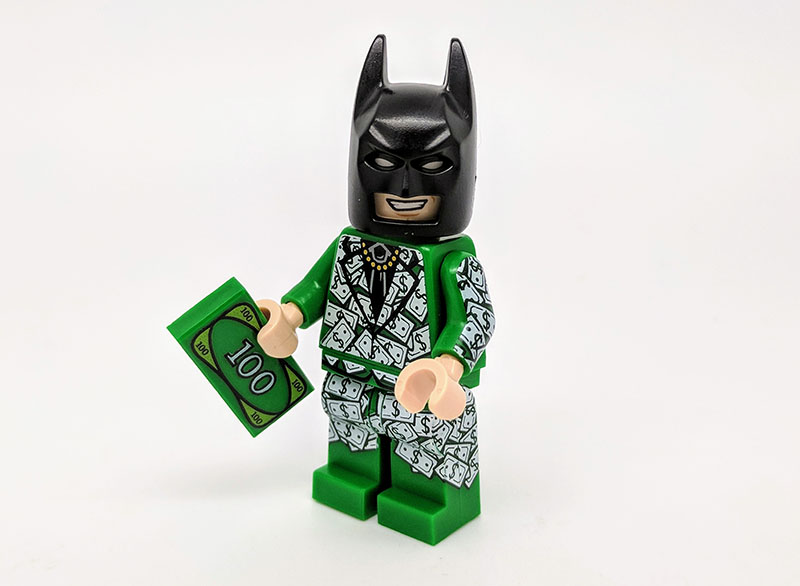 As a playboy millionaire, money is no object as clearly shown in Batman’s colourful money themed suit. Just like the Kiss Kiss Tuxedo batsuit, this is more Bruce Wayne than Batman. The print detail on this Minifigure is amazing, with the dollar bills featuring all over the torso, arms and legs even the on the waist area. The look is finished with a standard batsuit cowl and a LEGO 1×2 tile for a note. 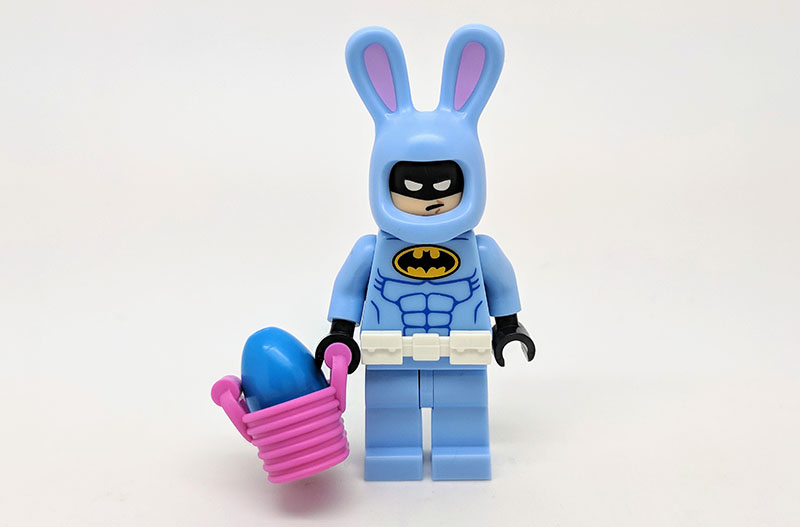 Easter Bunny Batman only appeared briefly in The LEGO Batman Movie after a more prominent appearance was cut. This Batsuit has appeared in other related merchandise including a LED Lite keychain and Luggage Tag. If you look at those versions you’ll notice this one isn’t exactly ‘screen actuate’. Easter Bunny Batman should have pink gloved hands and a pink cape, neither of which are included here, instead you get black hands, no cape but a basket and new egg element. As a bunnysuit head is used in place of a cowl, a new type of head is used which is better suited to the open-faced nature of the bunny head. Still Batman dressed as a bunny is pretty cool. 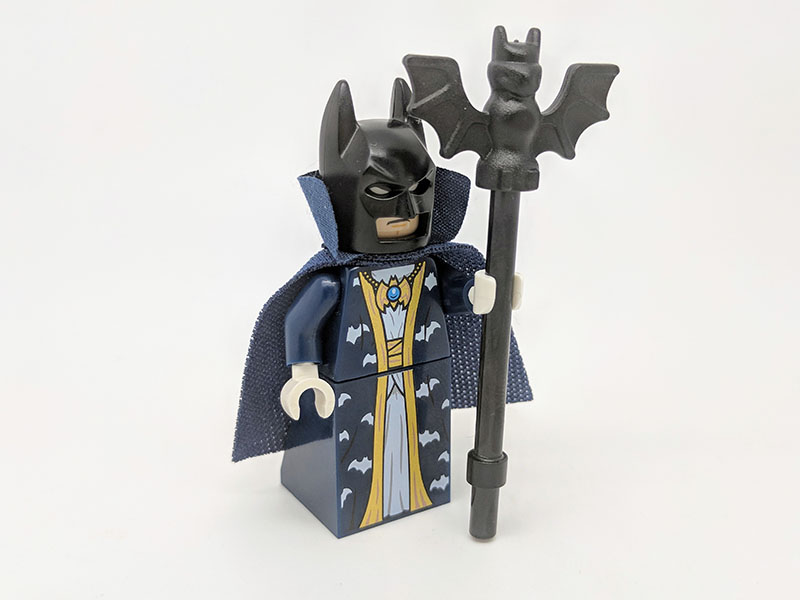 Wizbat was included as one of the concept Batsuits in DK Books The Making of the Movie, and is one of only a few Batman variants to not include standard legs. Wizbat has a sloped element in place of legs to recreate a flowing wizards robe, with material pieces included for a cape and collar. The little bats incorporated into robes design are great fun especially the Bat talisman necklace. But the coolest part of Wizbat is his bat-topped staff. 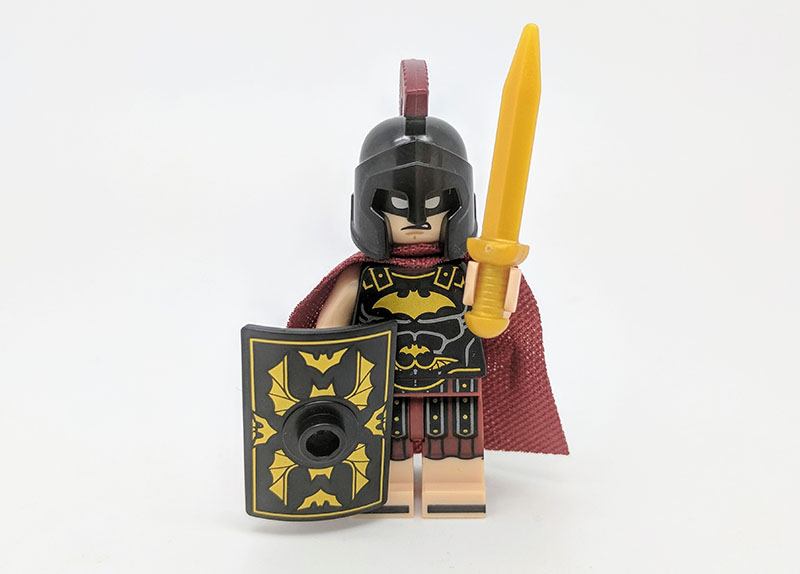 No-one can say Batman doesn’t have a varied taste in clothes, even if some of them aren’t best suited to fighting crime in Gotham City. Baturion is another of the concept suits from the Making of the Movie book, based on a Roman soldier, the little details perfectly capture Batman’s obsession with bats. They are all over the torso armour and the cool little Spartan shield. A standard Batsuit cowl is replaced with a Roman helmet and the slightly tweaked opened face head print is used instead of the ones used under normal cowls.

It’s difficult to pick a favourite, Easter Bunny Batman would win hands down if only it wasn’t so different from the source material, you can swap out the hands for those found on Nurse Harley and used Batgirl’s cape from the LMF series to get the suit looking like it should. With that in mind Baturion just edges it, thanks to the great print detail and great accessories. £14.99 for four minifigures is a little steep but they are four great ones, that will not appear anywhere else, not even in the rumoured second series of The LEGO Batman Movie minifigures. So if you’ve been collecting Batsuits you’ll definitely need this set The LEGO Batman Movie Minifigure Collection pack is available now from Toys R Us.