We like to think our LEGO® musings are quite diverse, after all LEGO now stretches beyond just bricks. But we haven’t really strayed beyond LEGO system sets when doing our reviews. We recently decided to pick up the new Christmas themed DUPLO set, Santa’s Winter Holiday and wondered if we should review it and the response from social media was an outstanding yes. We must give the people what they want and of course the set is just a little too awesome not to take a closer look at. So let’s take a look at our first DUPLO set, 10837: Santa’s Winter Holiday. 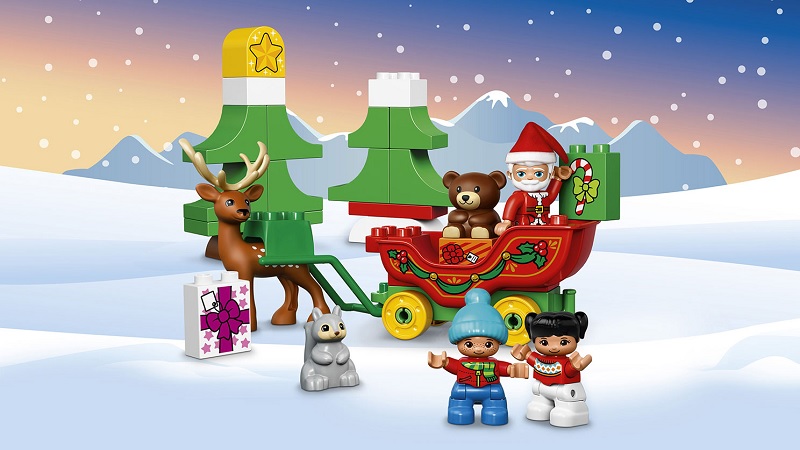 Bring some LEGO® DUPLO® holiday magic to your toddler, as they fly Santa around in his sleigh. Young children will love landing the sleigh to meet the 2 child DUPLO figures for some festive fun down the sledging slope. Help build the slope, the fir tree and snowman to develop early construction skills. Includes 3 DUPLO figures plus 2 animal figures For a number of years LEGO have been releasing seasonal sets, in fact they’ve become somewhat of a Christmas tradition, but the festive fun has never really extended beyond the core System sets. Making the appearance of a DUPLO seasonal set quite unique and from what we can see this is one of the first Christmas-themed sets to be released within the DUPLO range. For those unfamiliar with DUPLO, it’s consider the starter brand from the youngest of LEGO builders, with oversized bricks and unique DUPLO figures. Just like its older brother, the LEGO brick, over the years DUPLO elements have become a little more advanced and new unique pieces have been introduced. Despite that standard DUPLO bricks are compatible with their LEGO equivalents. 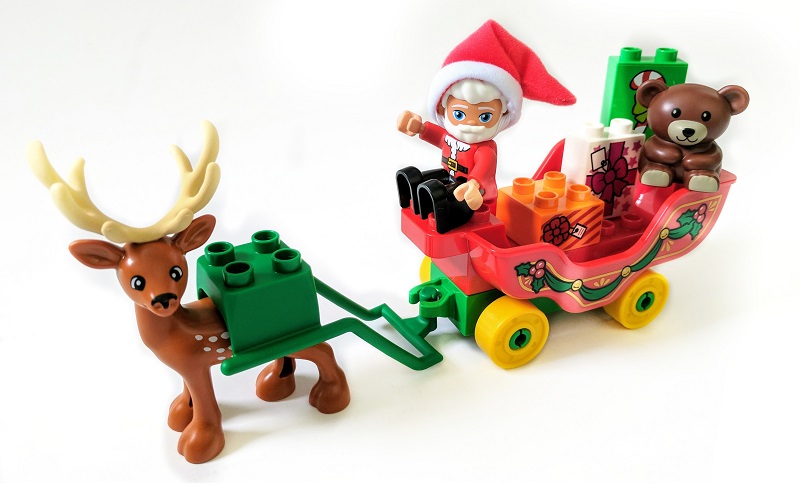 The set comprises of three main sections – Santa’s sleigh, an igloo and a Christmas tree. The igloo is the most build heavy of part of the set and has a little door section, which opens to reveal a small room area, with enough space for a couple of the included present bricks to be hidden inside. 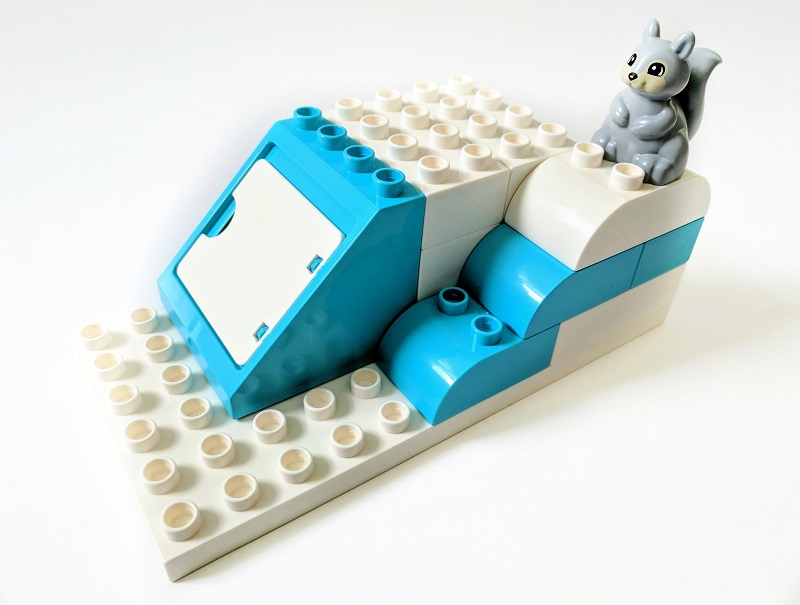 The tree is actually quite impressive, it may use minimal parts but they go together really well to create a great looking tree. The green bow bricks make the perfect spiked branches of a pine tree and the set exclusive printed curved brick for the star finishes it off nicely. The box also offers a couple of alternative build ideas so you could get a couple of trees out of the same bricks. The sleigh is the most detailed part of the set, with a 2×6 DUPLO chassis topped with an set exclusive sleigh body. This has some sweet festive print detail along each side and has enough room to fit all the presents and Santa. The front of the sleigh connects to a rather chunky harness that hooks up to the included reindeer. The connection between the sleigh and the harness is quite loose which may cause a few wayward disconnections during play. 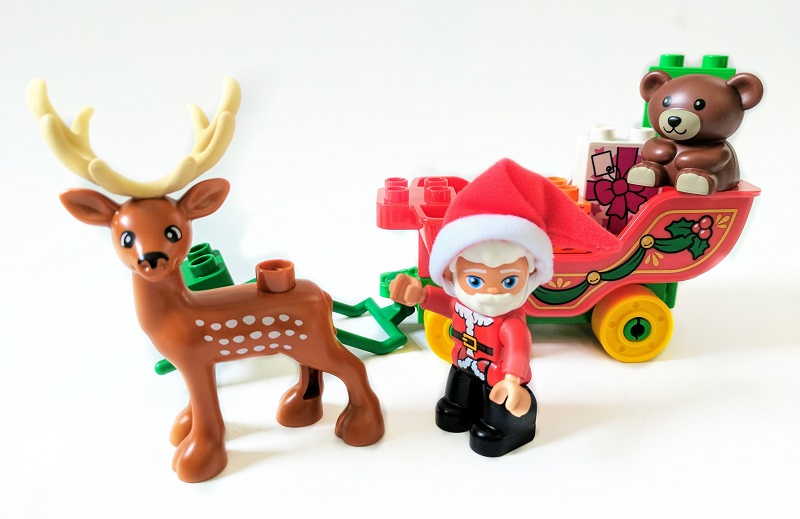 Along with those three main sections there’s also a fun little snowman, simply made using just four elements, including a traffic cone for a hat and a great little printed 2×2 DUPLO brick. Plus a sledge element which first appeared in last year’s Arctic-themed DUPLO set. 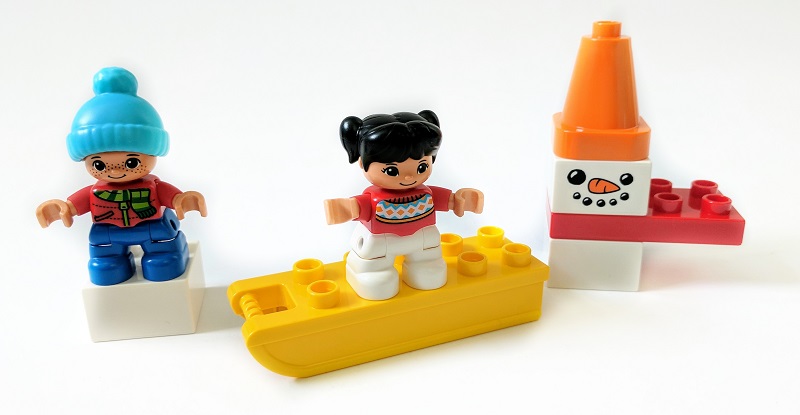 The first DUPLO characters where fairly basic, but in recent years they have become a little more stylised and in-line with their smaller LEGO Minifigure counterparts. The set includes three DUPLO figures – two kids, a girl and a boy with a wholly hat on, who is new to DUPLO and only in this set. But the star of the entire set is of course Santa and his material hat. This really adds character to an already great figure. The hat connects to Santa with an elastic strap and sits at a jaunty angle. With his hat off, Santa does have an air of a young George Lucas about him, although he’s a little too cheery looking for George. Joining the DUPLO folk are a trio of animal elements a bear, which also doubles up as a Christmas toy, a little grey squirrel and best of all, a deer. This male deer has some nice details including a speckled hind and antlers, although not exclusive to this set , it’s the perfect accompaniment to the sleigh, even if it does get drowned out a little by the harness. This wasn’t purchased for the build experience or the ability to use the bricks with other LEGO builds. It just looked fun and will form part of this year’s festive display, alongside the LEGO Winter Village and other seasonal sets. However it has made be appreciated LEGO DUPLO a lot more, the elements are great and despite their simplistic nature they have a surprising amount of flexibility in creating a number of alternative builds with the one set. The Santa DUPLO figure alone is worth getting it for and the fact it’s one of the first DUPLO sets to be themed around Christmas could certainly make it a collectors item in years to come. 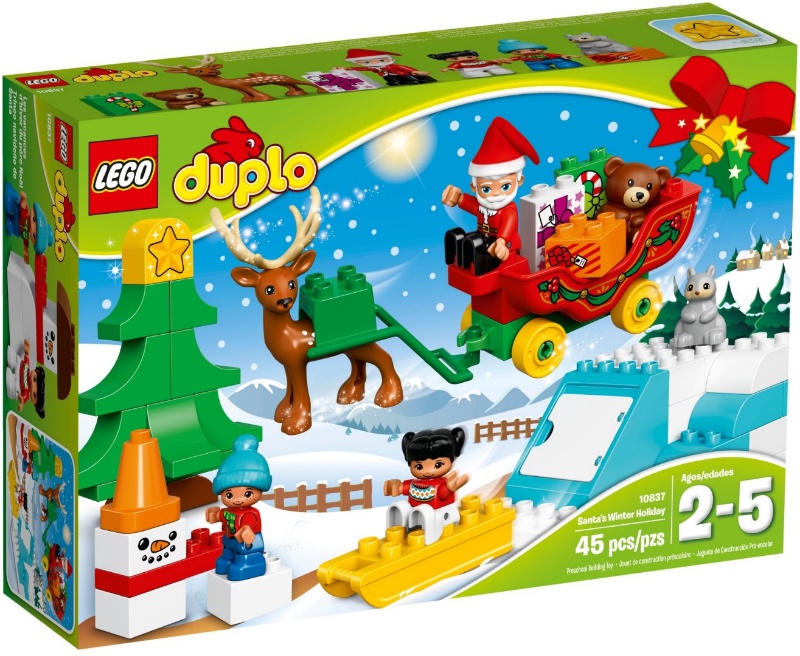