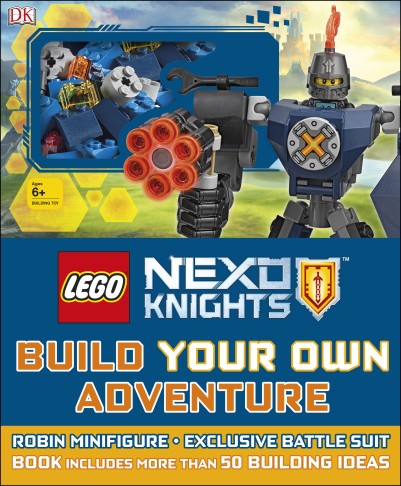 Combines more than 50 inspirational LEGO® ideas for building with enthralling LEGO NEXO KNIGHTS™ story starters. Get inspired to build, then play out your own adventures using your LEGO bricks. Comes with a minifigure and bricks to build an exclusive Battle Suit model that features in the book.

From the King’s feast at Knighton Castle to an attack in the night in the Dark Forest each chapter of LEGO NEXO KNIGHTS Build your Own Adventure is packed with inspirational model ideas ideal for all ages and building abilities, with a mix of easy, medium and harder models.

After a brief introduction to the book which introduces us to Robin and his Battle Suit, you’ll find the instructions needed to build your own Battle Suit. These along with the actual set have been designed by the NEXO KNIGHTS team at LEGO. Everything else in the book has been created by Jason. You’ll join Robin adventure across 5 chapters – Knighton Castle, Grindstead Village, The Dark Forest, Hill County and Auremville. These well known locations form the basis for the inspirations builds, which range from buildings, vehicles and even bad guys. It’s not just Jestro who can summon monsters. Many of these inspirational builds reply quite heavily on elements often found exclusively in the NEXO KNIGHTS sets. So if you don’t have a lot of NEXO sets you may struggle to find certain pieces. That doesn’t mean you can’t switch pieces out for elements you have in your own LEGO collection. 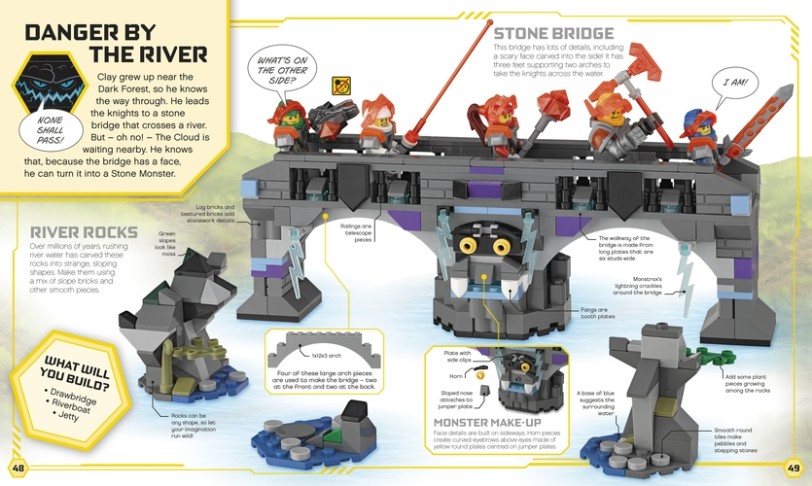 As with other Build Your Own Adventure books, beyond the instructions for the included set, the inspirations builds are only portrayed images and a few additional pointed dotted around the page. However they are shown off nicely and have little break downs for tricky bits. 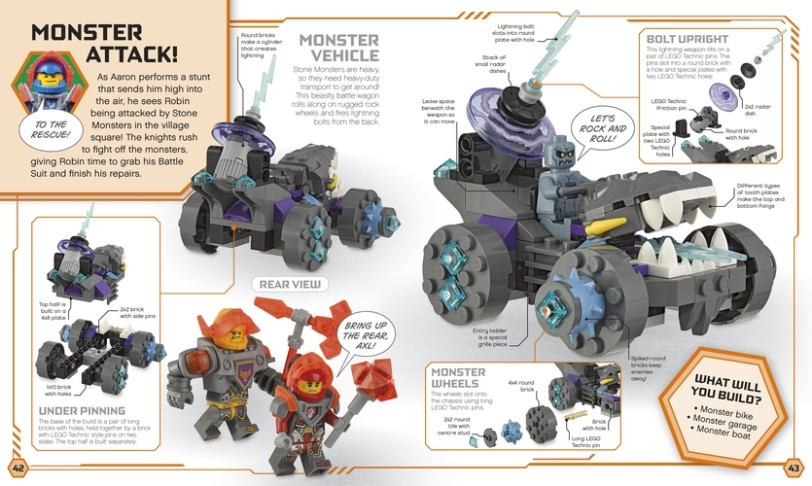 As with many DK titles, imagery included is presented in a fun way, elevated with connected story which runs throughout. It’s a unique way to present what essentially is a collection of random builds. The inspirational builds are a great way to provide builders with a base to expand their play experience, even if you’re not a fan of NEXO KNIGHTS, you’ll find many of Jason’s builds interesting and fun to try and recreate yourself. This year the LEGO NEXO KNIGHTS theme added a new series of collectable sets called Battle Suits. Each of the main Knights of Knighton have a unique suit, in which their minifigures can be seated. Budding knight Robin is a master designer and inventor, when he isn’t studying at the Knights’ Academy he’s helping to arm the NEXO KNIGHTS. So it’s only right the brains behind the Battle Suit has one of his own. Which is what you’ll find with this book. Robin’s Battle Suit is build in the same style has the other Battle Suits, using the unique and quite rare Design, Brick 4X2X3, 5.9 Ball element, which is used for the main base of the entire suit, along with element Design, Brick 4X3X3, W/ 3.2 Shaft, No. 1. A pair of arms and legs are connected to these central pieces via ball joints, allowing for a decent range of movement. 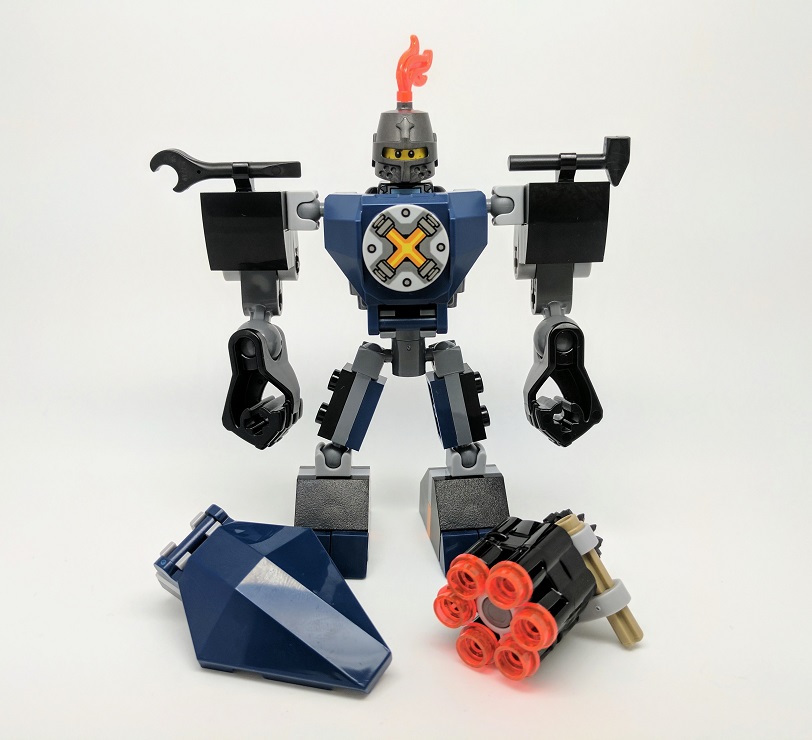 Robin doesn’t have a unique weapon like the NEXO KNIGHTS so his Battle Suit has a plain shield and a stud shooting barrel gun, which can fire 1×1 studs by turning a cog located on the back of the barrel. Although the suit isn’t very colourful it matches Robin’s minifigure and compares quite nicely with the other Battle Suits. Robin is one of the younger NEXO KNIGHTS characters, so his minifigure features short legs like his other versions, but features a unique torso. In place of his chicken crest is a pair of crossed spanners and his overall colour scheme is black and dark grey instead of his usual light blue outfit. Robin is sporting a mini knights helmet, decorated with an orange flame element, which offers a nice bit of colour to the set. If you happen to collect the LEGO NEXO KNIGHTS Battle Suits they you’ll definitely need to add this one to your collection. The Robin minifigure may not be as excited as the John Stewart Green Lantern included with the other Build Your Own Adventure book, but it’s still quite unique. The actual book offers plenty of interesting inspirational builds although they do rely on builders owning a lot of NEXO KNIGHTS sets in order to get access to a lot of the parts. One disappointing point is the lack of NEXO Powers, considering they form a major part of the theme, it would of been nice for at least one to be included, even if it was just in printed form in place of a physical shield piece. Apart from that it’s an another impressive title from DK, which will certainly appear to fans of the NEXO KNIGHTS theme. 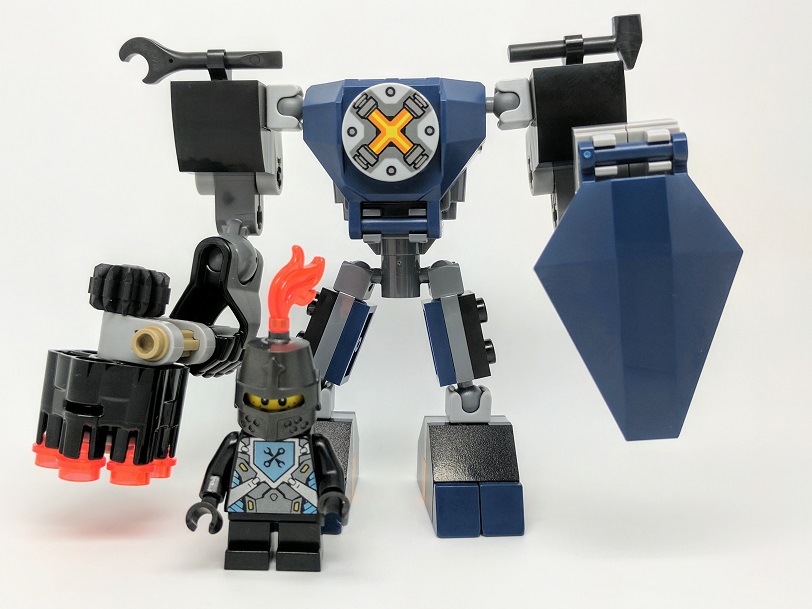 LEGO NEXO KNIGHTS Build Your Own Adventure is published by DK Books and will be available from August 3rd. Pre-order now from Amazon. Thanks to DK Books for providing this book for review.