For the last few years Toys R Us have offered a number of exclusive sets has part of their Bricktober LEGO® event. However in 2018 Toys R Us ceased trading in a number of countries including the UK and US. Despite this the 2018 Bricktober sets had already been produced and appeared in various places. The 2018 range included four packs of Minifigures featuring characters from Jurassic World, NINJAGO, Harry Potter and Marvel Super Heroes. None of the sets have officially been available in the UK until now. This week Hamleys started offering the LEGO Marvel Super Heroes Minifigure set for free when purchasing £50 of LEGO in their Regent Street store. I’ve managed to get one of the sets to complete my collection and thought I’d take a closer look at the four characters it contains. 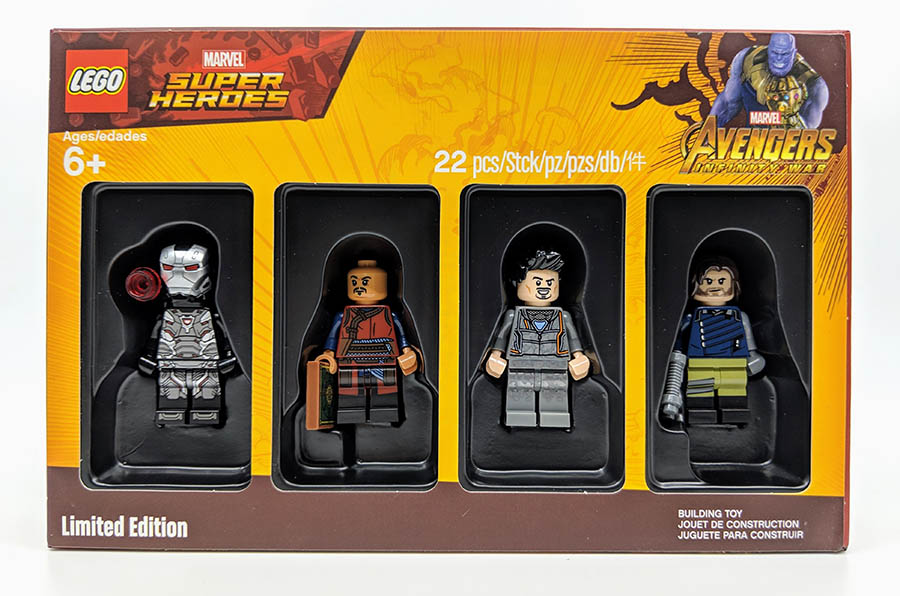 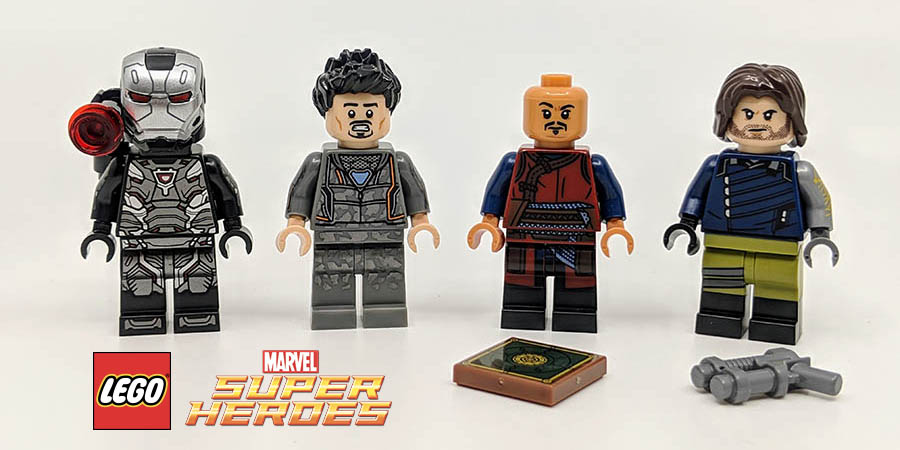 The set features four unique Minifigures based on characters from Marvel Studios Avengers: Infinity War. Although the characters have appeared in other LEGO Marvel Super Heroes sets, the versions here are exclusive. They include War Machine, Tony Stark, Wong and Bucky Barnes in his ‘ White Wolf’ guise. 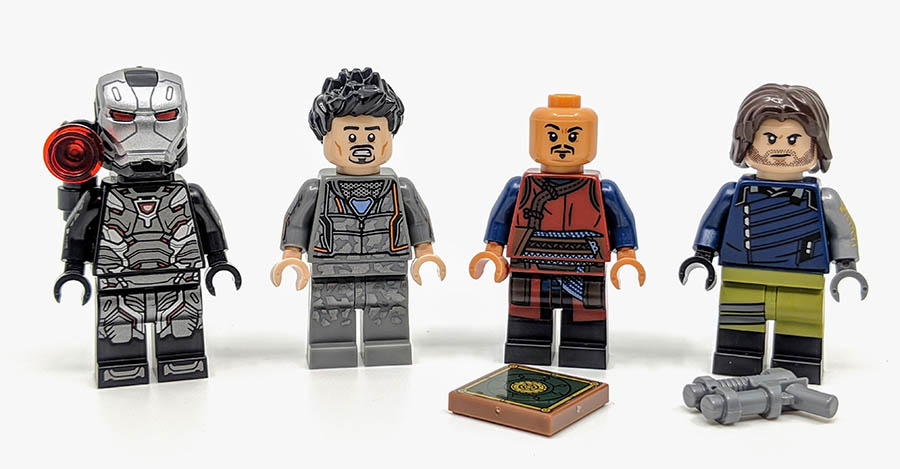 War Machine has appeared in a small number of sets including as Iron Patriot for one of the LEGO Marvel video game releases. The version here is similar to the one included in Airport Battle set, although his torso and leg print is a little different. Also his double sided face print includes a cool nav system overlay on one side. His shoulder mounted weapons system is also similar to War Machine’s first LEGO appear, just using black elements in place of grey.

Despite being Iron Man, Tony Stark hasn’t really made many appearances in LEGO. Here is is wearing his camo tracksuit has seen at the start of Infinity War. Tony also has a double-side face print, with his trackmark smirk being one of the two expressions. I would of been nice if he had his old school mobile phone has an accessory.

Wong first appeared in Doctor Strange and became an instant fan favourite thanks to his straightlaced attitude and secret love of Beyonce. Because Wong his almost bald, he only has a single face print, which captures Wong’s serious demeanour. His has some great print detail, which mixes nice with the dual-moulded legs. He comes with a 2×2 printed tile which represents the Book of Cagliostro.

Finally we have Bucky Barnes, aka the Winter Soldier. In Infinity War, he appears right towards the end of the movie in Wakanda. He was taken there by Captain America to help rid him of his HYDRA programming. The Wakandans refer to Bucky has the White Wolf. They also give him a new arm, represented by a cool pearl silver arm, which also features some gold printing. Talking of printing, Bucky has dual-moulded legs which have a cool bit of printing down the side of the right hand leg. 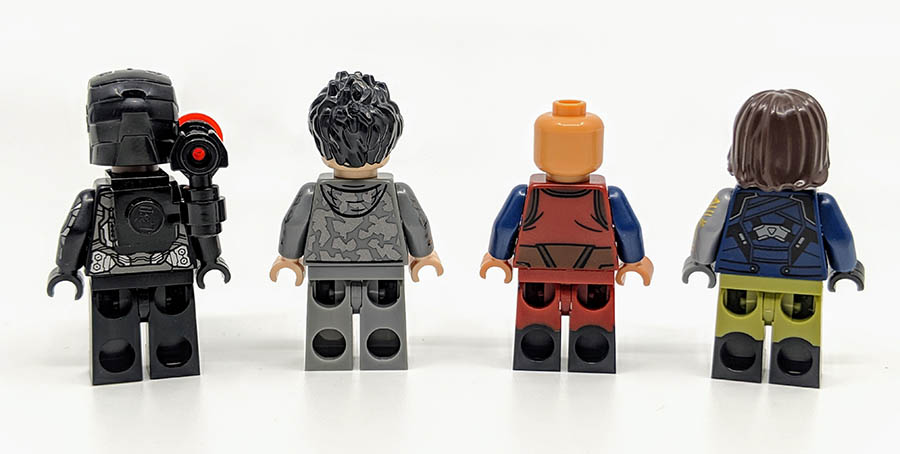 These Bricktober sets are often a great source of Minifigures and this Marvel Collection is no different, with Wong and Bucky the most exclusive. Tony doesn’t feel as special has those two guys, but technically he is the rarest. Getting Iron Man or War Machine armour, is alway fun but I’d have preferred someone else in place of him here. Although I do like his AI system overlay print. The real shame is these and other Bricktober sets have been so difficult to get i certain countries. Of the four created for 2018, this is the one of the most wanted by collectors. It’s also the only one to currently be available in the UK. You can get it now from Hamleys, where the set is given free when spending £50 or more on LEGO products in the retailer Regent Street store. 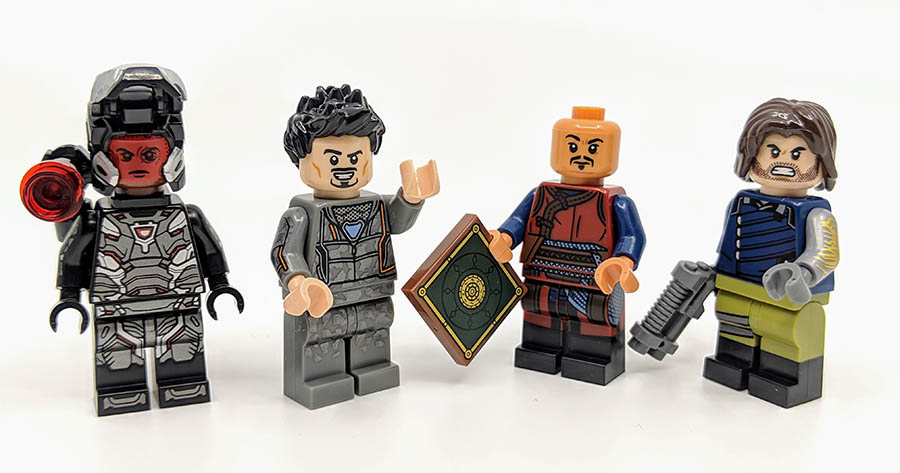