The longer a LEGO® theme is available, the more likely it is for it to expand beyond standard playsets. In the past these sub-themes have given us things such as Star Wars MicroFighters, Friends Play Cubes and Super Heroes Mighty Micros to name a few. Now it’s time for the Wizarding World of Harry Potter to get in on the action with the upcoming new Hogwarts Moments. These are buildable books open to reveal a unique recreation of one of four different Hogwarts classrooms. Along with the classroom sections, there are various buildable elements and a trio of Minifigures which include a teacher and two students. The Hogwarts Moment sets are due to appear in early 2021 but I’ve been able to take a look at them a little early so here’s my review of upcoming LEGO Harry Potter Hogwarts Moment sets. 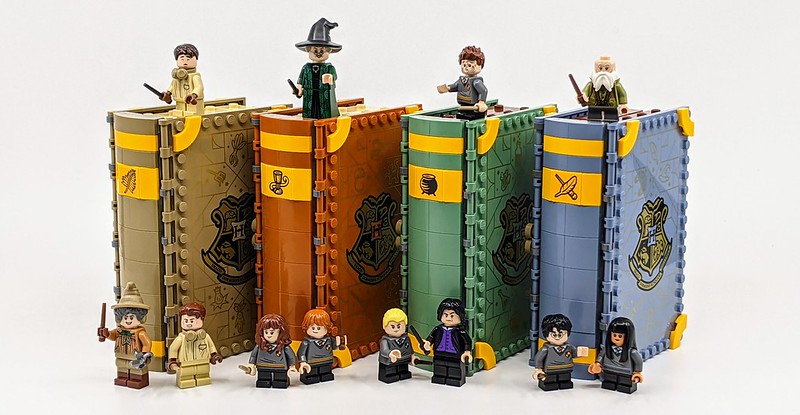 The basic build of all four sets is very similar with new cover plate elements used as the core of each classroom. Various details are adding in a couple of different ways. But first a closer look at those cover plates, these are a single piece with a surface area measuring 10 studs by 15 studs. Along one side of the plate are a series of clip connector points, similar to a 1×2 plate with stick. A strip of studs borders the entire plate, with the centre of it being a flat surface. The back of the element features a 2 stud wide border, which becomes an important aspect of each build. The same element is used for both the front and back covers of each book, with the Hogwarts crest printed on each of the four different coloured covers. These are then connected via a central spine, created from a 2×15 plate and four additional 4×4 plates and a series of bow elements.

Once the cover is complete the insides are then added. These comprise of a selection of minibuild furnishings and then sections which are directly connected to the cover. This is where things get quite clever, as all these elements are built in such a way they can neatly slot together within the book once it’s closed. This is a great way to keep everything together, although these pieces can be a little tricky to get firmly in place. Still, this is a clever little way to expand the play surface of the sets and is even more impressive to get these pieces to slot together when inside the book. Although we are treated to a printed cover on each book, much of the other graphic details are achieved with stickers and I did find a few of them tricky to apply, especially on the elements where they are on an enclosed surface.

The Transfiguration Class teaches the students of Hogwarts to change the form of themselves or objects around them. The set recreates the classroom with a central column showcasing portraits of past Hogwarts wizards and a cupboard, then ornate walls, which open out to expand the set beyond the covers of the book. The various windows are all stickers but they look great nestled within the sections of the wall. Additional elements include a small blackboard, students desk, teachers desk and a small bookcase filled with trinkets. As the class teaches the art of transforming, there are a couple of accessories to denote this including a goblet, yellow frog and Scabbles, who is the actually Peter Pettigrew in his Animagus form. 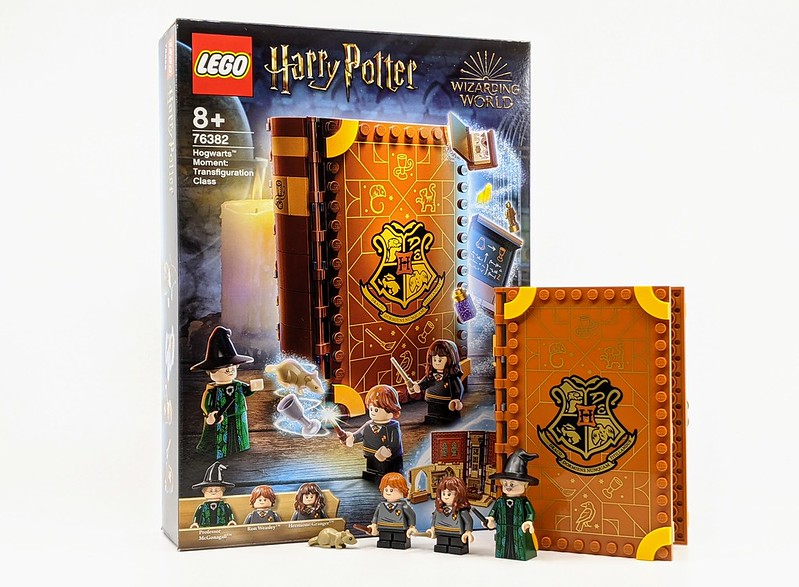 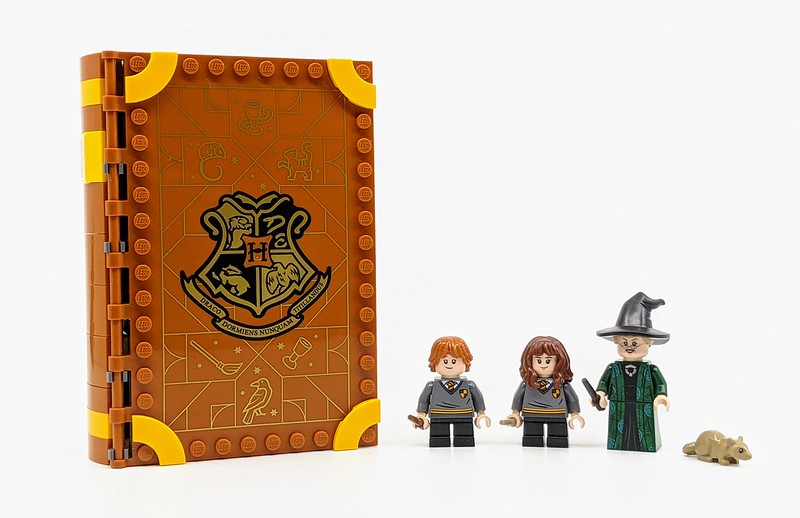 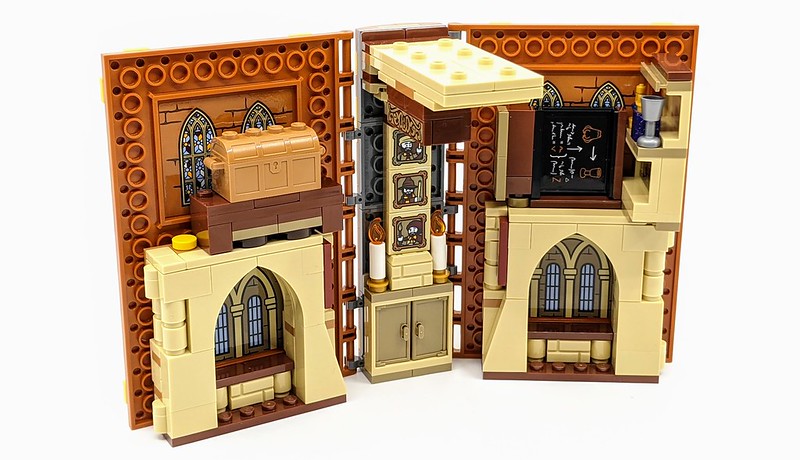 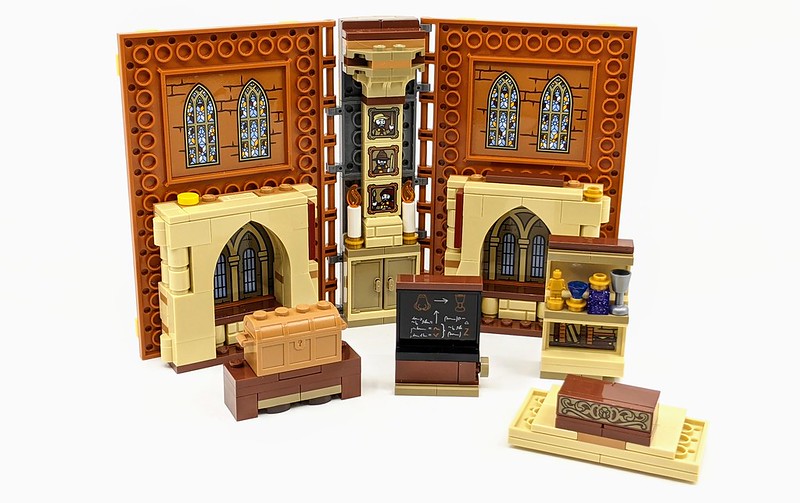 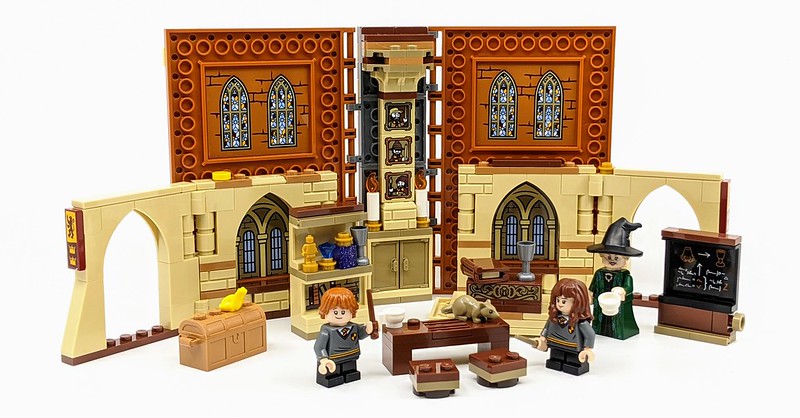 Minifigures featured in this set include Professor Mc McGonagall, who is unique to this set as she uses the new hat element and has a sloped base in place of legs. She is joined by the younger versions of both Ron and Hermione, who both have the original short legs. All three characters have dual faces and wands.

There is only so much magic you can achieve with a wand and some magical words, sometimes a good old fashion potion is just what you need. There’s no better place to learn how to concoct the perfect potion than in Professor Snape’s class. But of the classroom’s details is built into a folding central wall, this has some great details including stacks of potion bottles, both in sticker-form and actual elements. A separate section of the wall is connected to the inside of the book’s back cover, where you’ll find more potion containers and various accessories. Additional buildable sections, which can be used to dress the classroom, include a desk, blackboard, shelf and a comfy armchair. 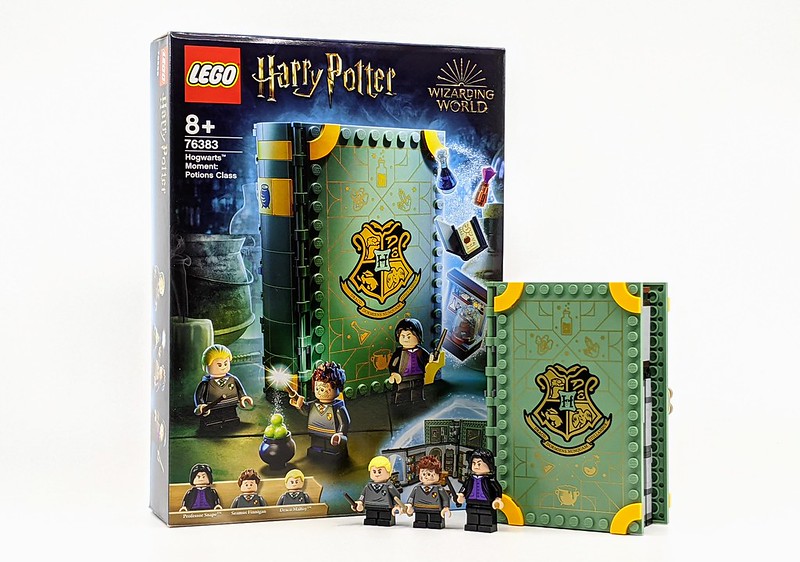 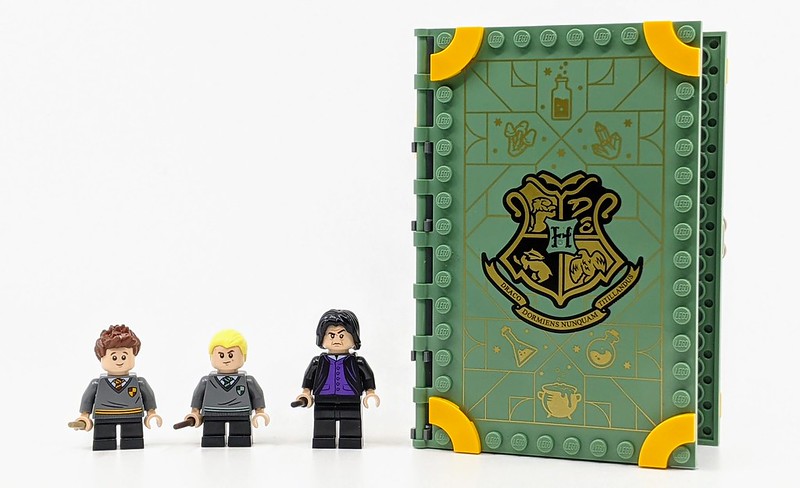 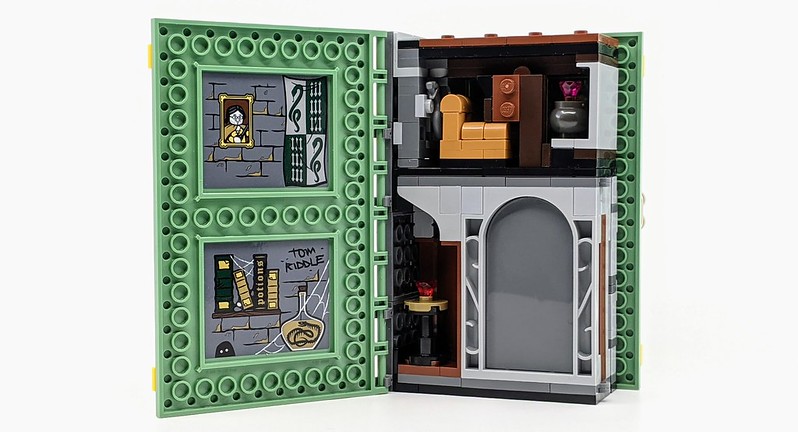 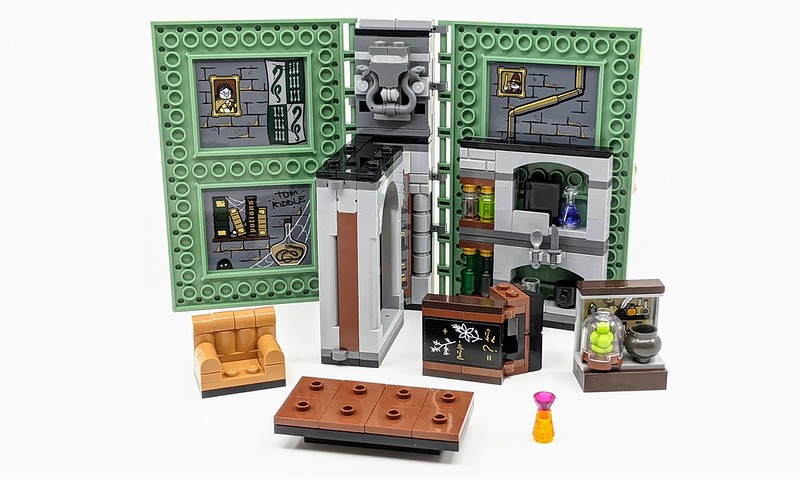 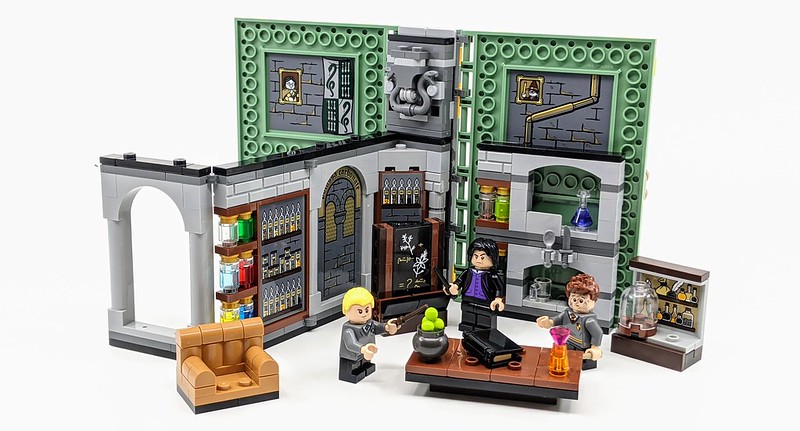 Minifigures found in the Potions Class sets include Snape, who is similar to his previous versions, although he has a slightly different torso and there is no detail on the legs. He is joined by Draco, here in his younger form and Seamus Finnigan, who has only appeared in one other set during this new wave of sets and he has a great alternate face, which seems to show his lack of success in mixing potions correctly.

Of the four classrooms, I think this is maybe favourite as it’s packed with detail. Much like the Potions Classroom set, the Herbology Classroom opens out with a folded wall from the central section. This represents the wooded framing of Professor Sprout’s classroom or should that be greenhouse? Although the’s plenty of details in this set including vines, pot, cupboards and lamps, there’s only a couple of additional minibuilds. These include a water tap and a plot of soil, filled with plants and pumpkins. 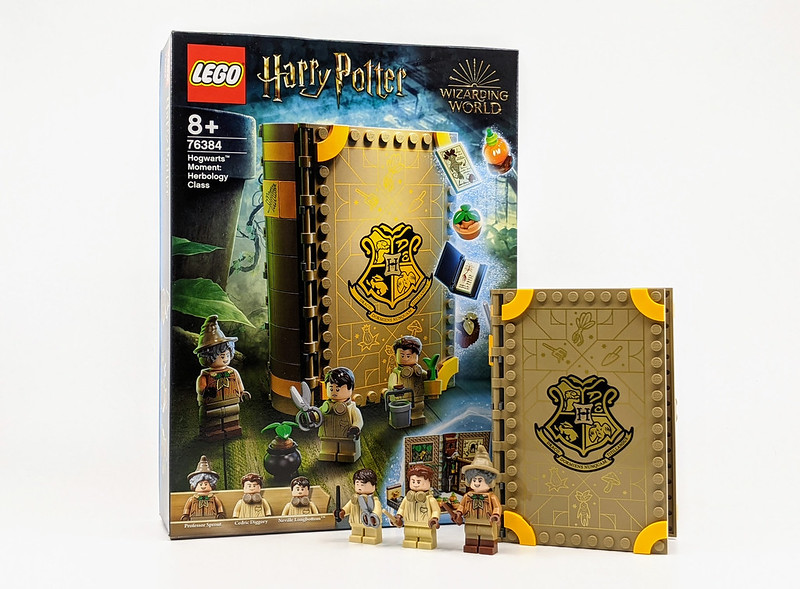 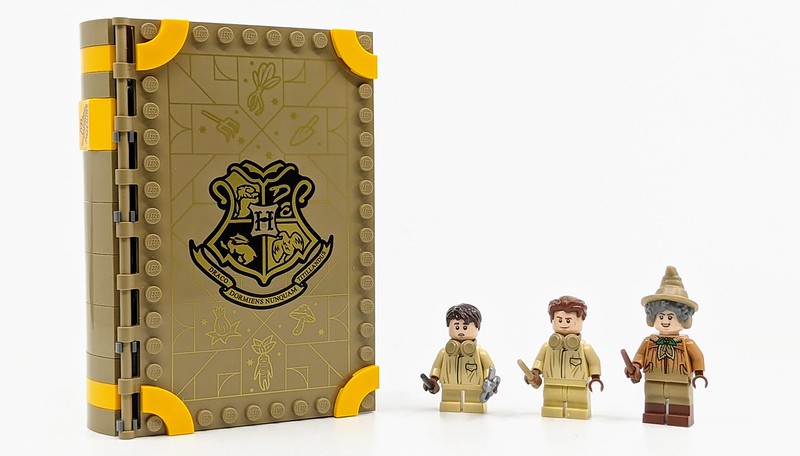 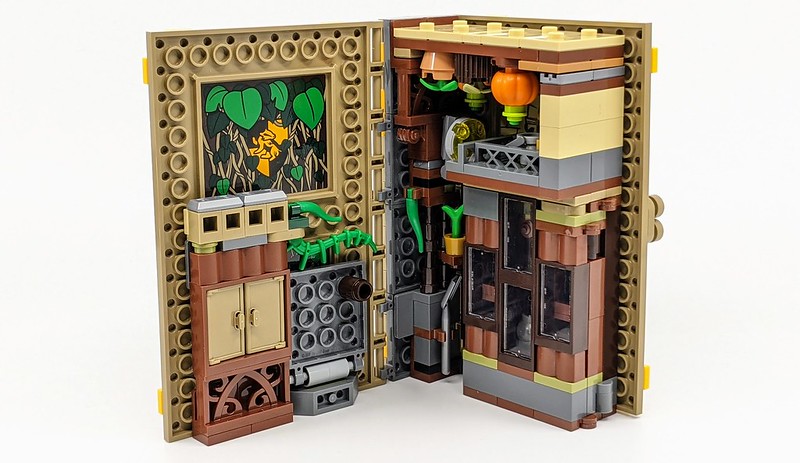 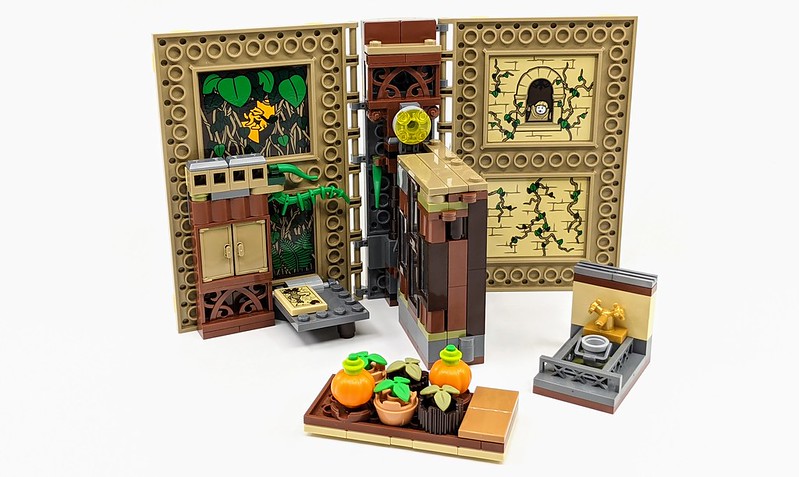 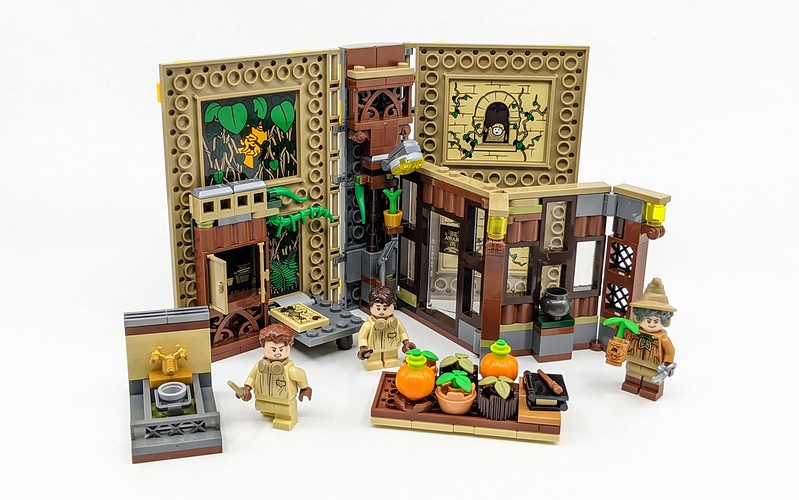 Professor Sprout is another unique version of the character, only found in this set. In fact, this is her first appearance in a playset, after only being included in the new collection of LEGO Harry Potter releases via the second series of Collectible Minifigures. Although she uses the new hat and hair element as the CMF, the rest of the Minifigure is all-new, so new double-sided face, new torso and legs in place of a robe section. Neville Longbottom is similar to the version featured in the first series of LEGO Harry Potter CMFs but has a standard hairpiece with the ear muffs being draped around his neck. This is achieved with the new headphone element introduced with the Monkie Kid theme. Cedric Diggory has the same ear muffs and is another unique version of the character, who is kitted out in the beige gardening overalls.

The Charms Classroom is where Hogwarts students learn the basics and where they perfect wand movements and spell pronunciation. Similar to the Transfiguration Classroom set, the Charms Class set walls also open out like a book from either side of the set. These feature a fireplace, bookshelves and a Ravenclaw banner. Of the four sets, this one has the most separate minibuilds. Which include a couple of desks and benches, along with a smaller bookshelf, glass cabinet and chest. All those pieces mean this is also the most complex to fit together into a closed book. 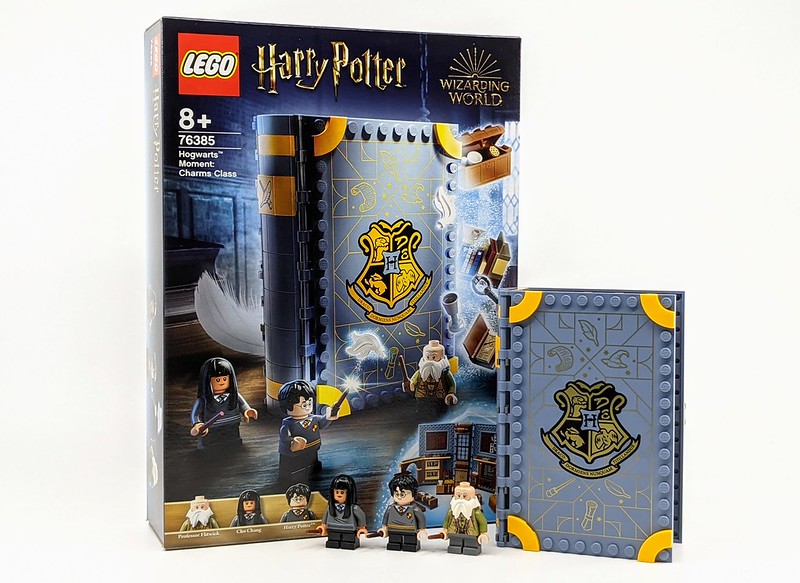 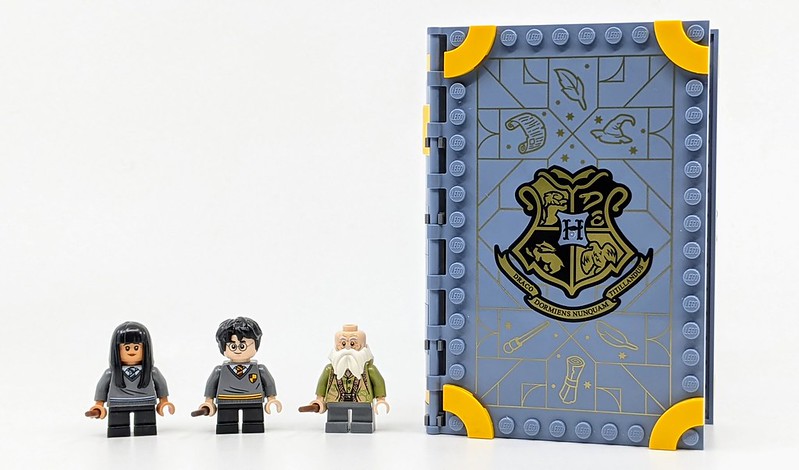 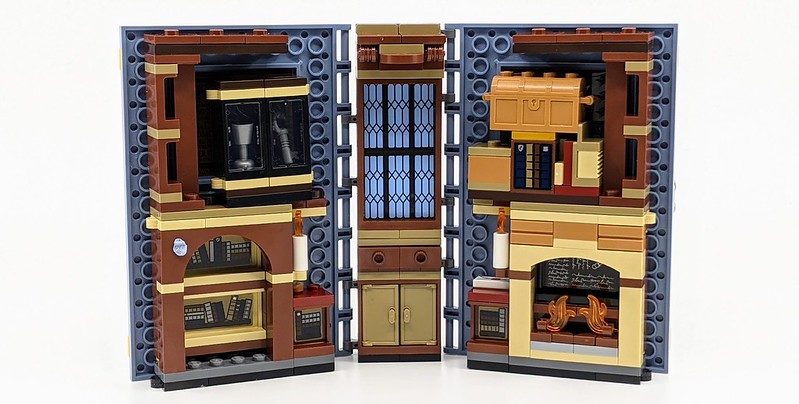 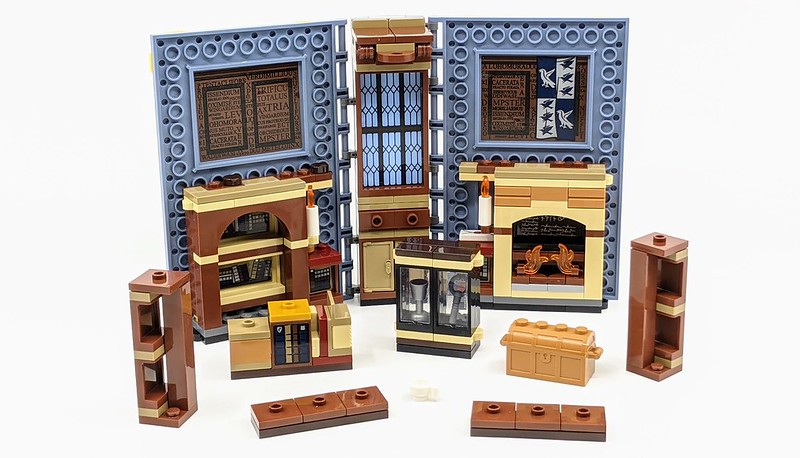 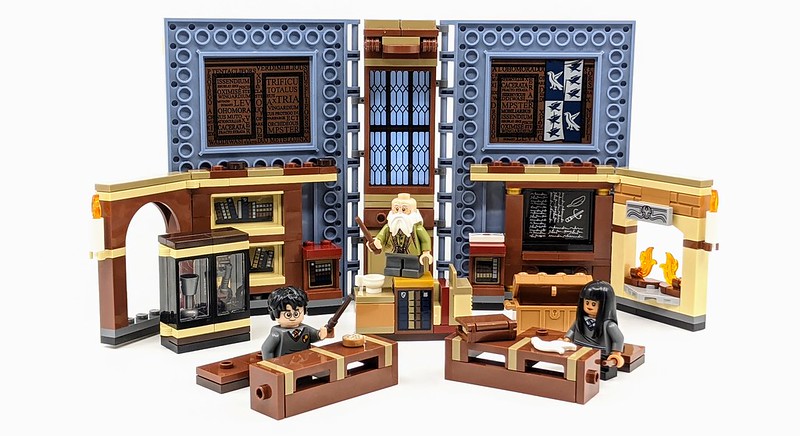 The three featured Minifigures are a mix of familiar faces such as Harry Potter and Cho Chang, who are both in their young forms, thankfully Cho doesn’t have the awkward looking material skirt, like her CMF appearance. Now, this is where things get a little confusing – Professor Flitwick has appeared in other LEGO sets but with a very different, younger look. When the third Potter film was released a similar looking character was featured, who it was confirmed to by Flitwick. So this is the first time the character has been featured in Minifigure form in his older appearance. Complete with a bushy white beard and balding head. It’s also nice to have different versions of characters, so this is a fun addition to the range.

I like it when LEGO themes go off and create these sort of sub-themes. Despite many of the previous sets featuring aspects of Hogwarts, none have really focused on the numerous classes. These do so in a very unique way, offering an interesting build experience. Sure, we’re seen other sets based around the concept of a book, but unlike the Disney Princess Storybook sets, these offering a far more interesting build and can be incorporated into other LEGO Harry Potter sets. Could they have just done classroom-themed playsets, without the need for them being in book form? Most certainly, but I don’t think they would be as interesting. Conforming each set to a similar build style offers a uniform feel and a nice sub-collection of sets. The number of Minifigures included in each set is perfect for the size of them and I also like they offer something new for some characters. The LEGO Harry Potter Hogwarts Moment sets will be available from January 1st, 2021.