The spring range of new LEGO® titles from DK Books are nearly here and we’ve been taking a look at them ahead of the releases over the next few weeks. The first of which is LEGO Animal Atlas with is the latest in the line of ‘Inspirational Ideas’ books which have previously included LEGO Awesome Ideas, The LEGO Play Book and 365 Things To Do With LEGO Bricks. Unlike so of those titles, the LEGO Animal Atlas also includes a special collection of four exclusive minibuilds. So for our review we’ll be taking a look at the book and the LEGO minibuilds included with it. 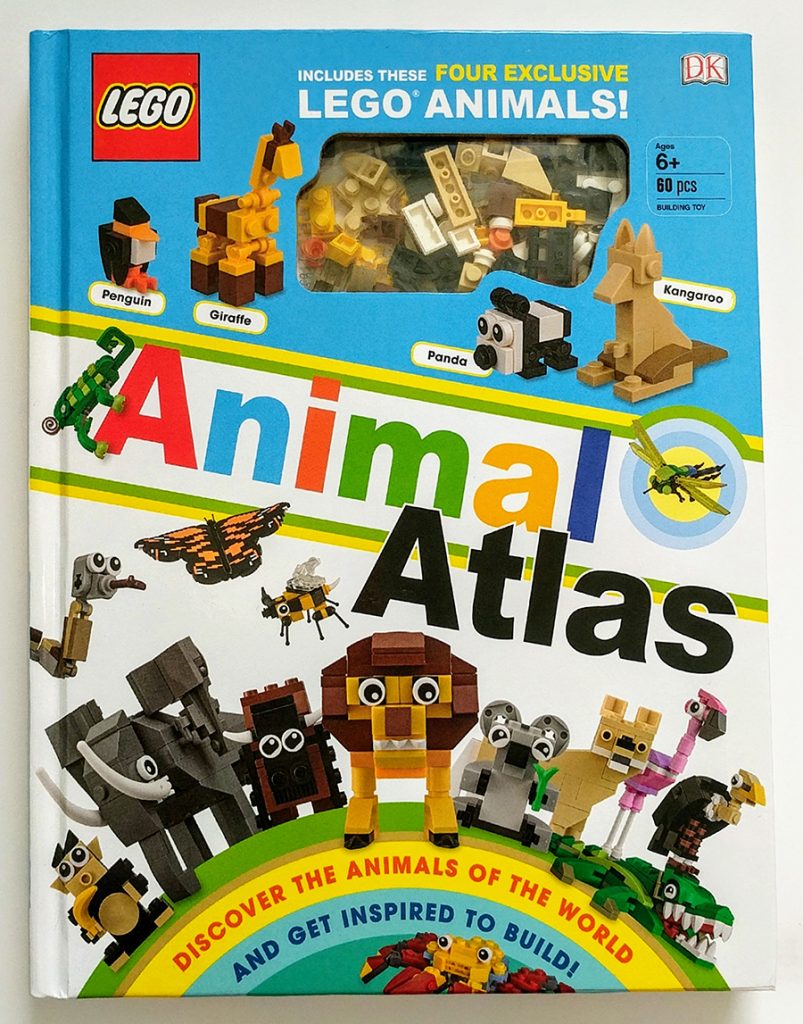 Which animal gobbles up 4,000 clams in one meal? Where can you find a snail as big as a baseball? The LEGO Animal Atlas has the answers and a whole lot more. It’s packed with seriously fascinating facts and images of more than 110 models of the world’s most awesome animals. Best of all, it comes with 60 bricks to build four exclusive mini-models – a panda, giraffe, penguin and kangaroo.

A detailed LEGO map, dotted with charming micro-build creatures, introduces each of the continents. From a cute koala in the Australian outback to a mighty lion prowling the African savanna, LEGO Animal Atlasshowcases many of the world’s favourite animals – plus some unusual sights, such as the bizarre blue-footed booby and the mysterious giant squid!

Tips and breakdowns will inspire children aged 6+ to create their own animal models. Clear photos, fun facts, and classic LEGO humour helps children learn as they build and play their way around the animal world.

As mentioned above the book is similar to past books which offer a number of inspirational models. As the title suggests, these are all animal themed. The book is split into sections which corresponds to parts of the world, then various habitats in these areas. So the builds featured across the book are grouped together in such a way as to represent where you’ll find them in their natural environment as opposed to types of creatures. But before you get into the builds, there’s a couple of pages which highlight some of the useful elements you can find in your own LEGO collection and a brief section where you can learn more about the trio of fan builders who have provided the inspirational builds in the book. They include Rod Gillies, Jason Briscoe and Simon Pickard. 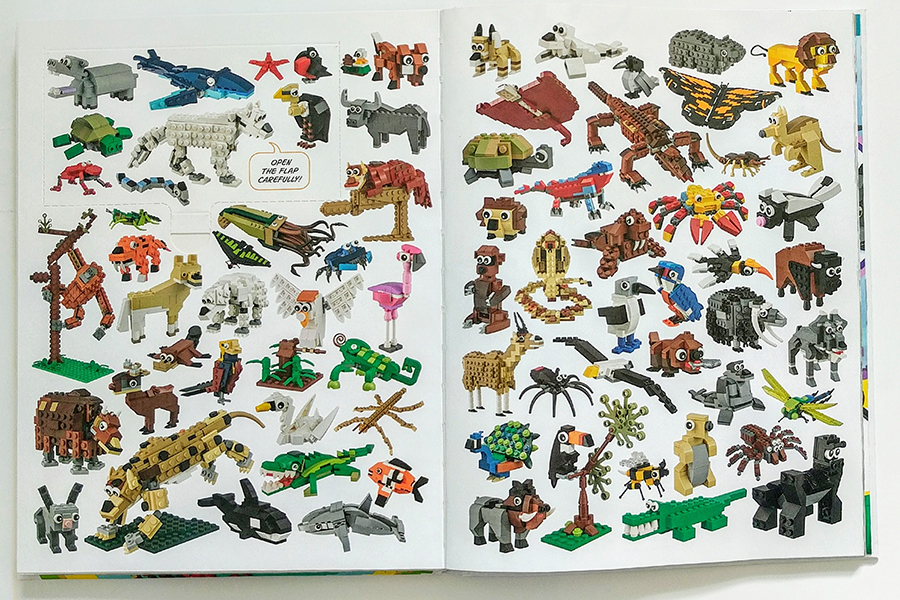 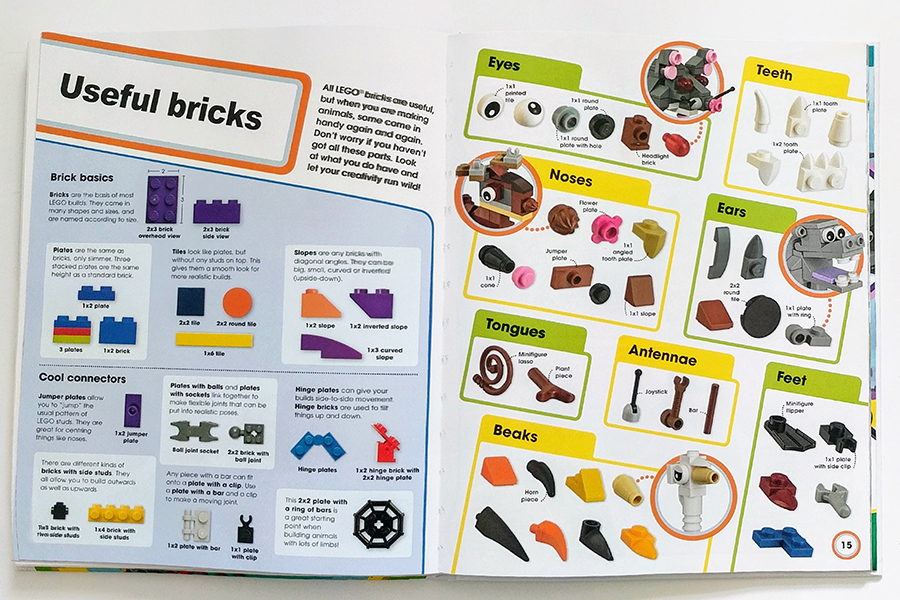 After explaining how the book is laid out, you head off on a brick-filled safari across the globe. Each page features colourful pictures of various LEGO creatures and critters, as well as fun facts about them and brief snippets of building advice in the Build It boxouts. This book isn’t filled with instructions apart those for the four exclusive builds, the models throughout the book are meant to inspire you to builds thing with your own bricks. Even if you don’t have the exact elements, you can get creative and build whatever you want, using the images in the book as a guide. 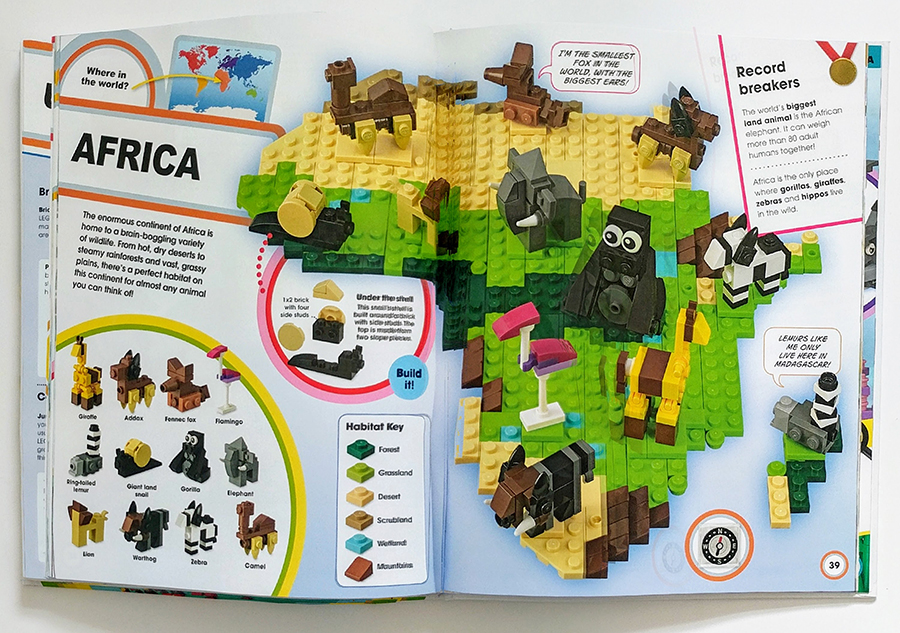 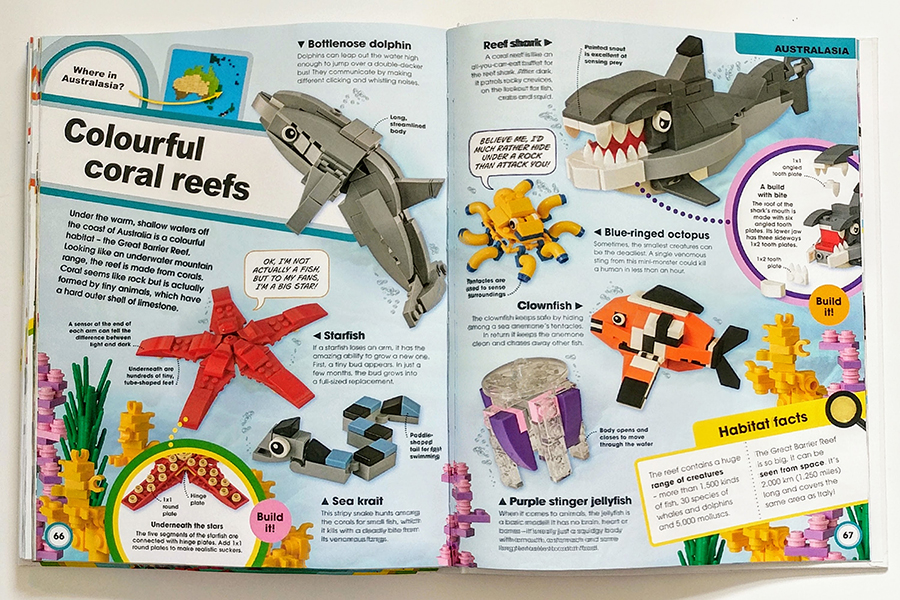 The first few pages of the book include instructions to create four exclusive minibuilds using the elements included with the book. These are packaged in a clear polybag, and can be found under a sealed flap inside the front cover. Hopefully this will stop people nicking the LEGO from the books when on shelves in shops. 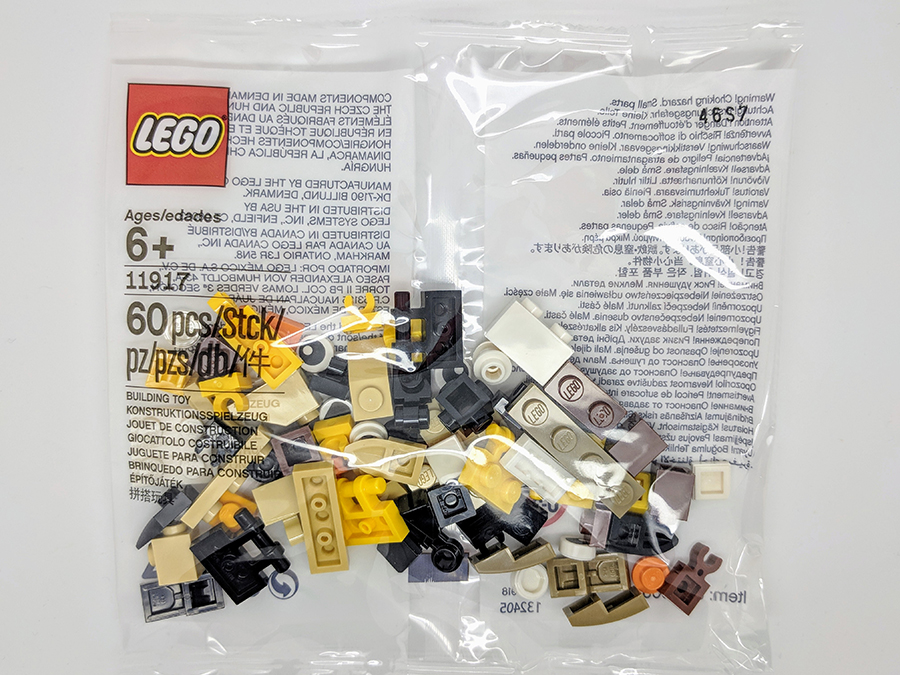 The minibuilds are very basic and are a little like the builds you’d get in the LEGO Advent Calendars. They are fun and do a decent job of representing the animals they are meant to look like. Especially considering the small amount of pieces used for each creature. I’m not sure if I’f prepare a single but more detailed build instead of the four different creatures. But they are a nice additional to the book.

These sort of inspirational idea books are fun to look through and are a great way to get inspired. Although the lack of instructions may confused some people, the images are clear enough to get a grasp of what pieces you’d need to recreate them yourself. I would prefer is these sort of books were tied to certain LEGO Classic set, as they would certainly give people an easy starting point to get building, but the fun of LEGO is diving into your buckets of bricks and get building. The LEGO Animal Atlas from DK Books will be published on June 7th and you can pre-order now from Amazon. Thanks to DK Books for sending us the title to review. The thoughts within this review reflect those of BricksFanz. and not DK Publishing.