With Cloud Cuckoo Land destroyed by Bad Cop and the Octan Corporation Police Force in the first movie, the sequel needed an equally crazy place to unleash the limitless creation that can be built with LEGO®. That honour goes to the Systar System, a mysterious part of the galaxy ruled by Queen Watevra Wa’Nabi. This shape shifting creature may not be all she seems. Watevra Wa’Nabi appears in two sets and this is the smallest of those sets. In fact this is a character heavy pack, with a mixture of minifigures and mini-dolls including Lucy, Sweet Mayhem and Susan. Plus two brick-built characters Queen Watevra and Banarnar. Let’s take a look. 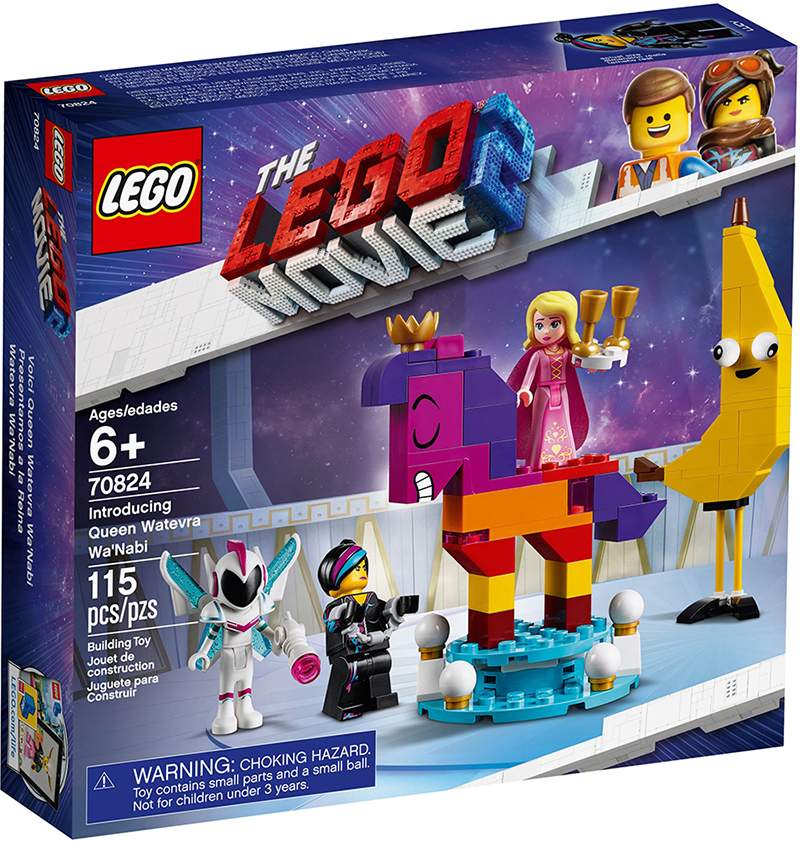 The build be begins with the downright crazy humanoid fruit, Banarnar. Part of the Systar Systems inner circle, this brick-built fruit was recently seen in the latest trailer for The LEGO Movie 2, in which Banarnar slips on himself. I thought this crazy looking build would be an unsteady. Just look at those legs. But it’s stands up perfectly. The designer of the build has managed to balance it amazingly well and it looks like a banana. 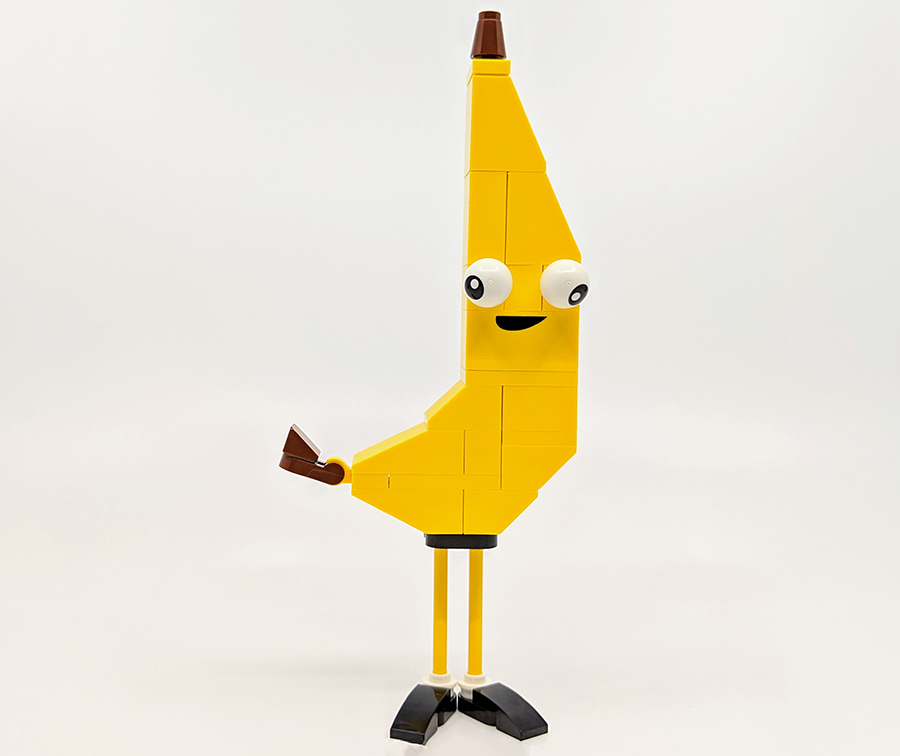 The majority of the build is focused around Queen Watevra Wa’Nabi, as her name suggests, she can be whatever she wants to be. In this set she appears in her horse form, which uses an odd mix of pink, purple, orange, red and yellow bricks. As well as some unique printed bricks. She stands a top a brick-built turntable, made from a selection of aqua blue plates. This has a 2×2 turn plate, so the top of it can be spun around. 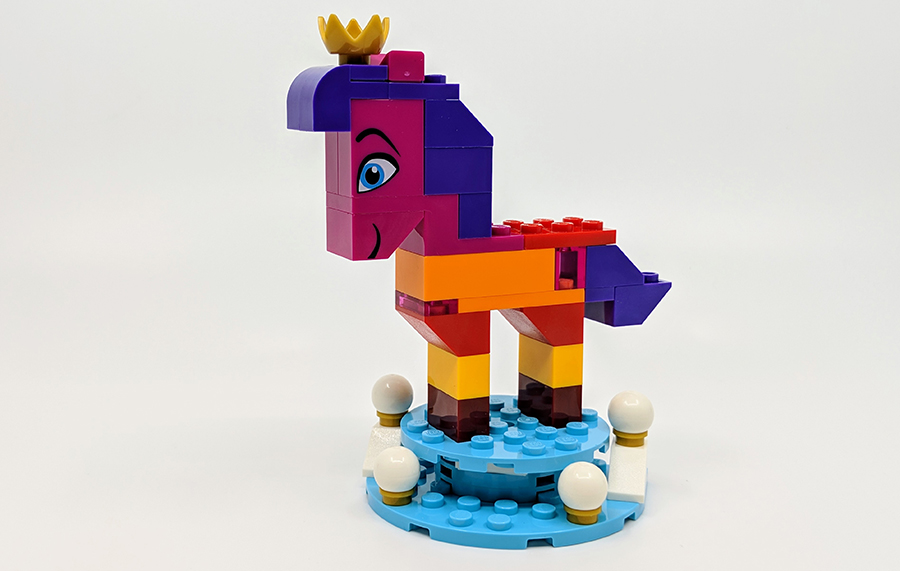 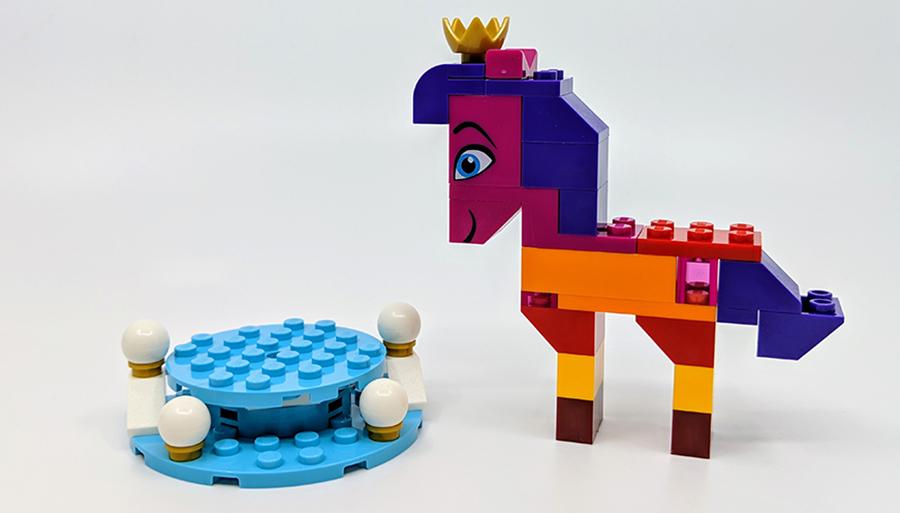 There are four 2x2x1 bricks which have a pair of different eyes. Two which are open and two that are closed. Plus there are two 2×2 inverted slopes which have two different mouths. A final 1×4 has a smirk on it and is used in Wa’Nabi’s alternate form. These can all be combined to create different expressions for the Queen. The slopes only have print detail on one side which is a little annoying, but need as these prices are also incorporated into the character’s other form. 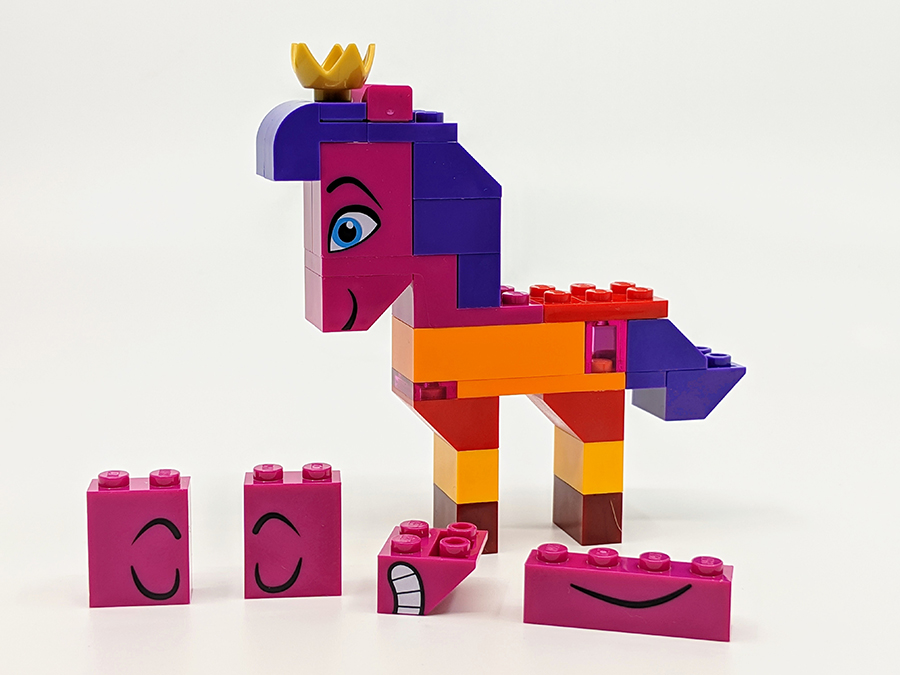 Wa’Nabi’s pile-of-bricks form, is exactly that, a pile of bricks, which uses the same elements for her horse form. This also uses that 1×4 brick with a smile, which is left over if you build the horse form. I’m not always a fan of brick-built characters but Wa’Nabi and her banana chum are actually quite cool. I think I prefer Wa’Nabi in her pile-of-bricks form, so much so I’m tempted to pick up the set, which allows you to build numerous versions of her. 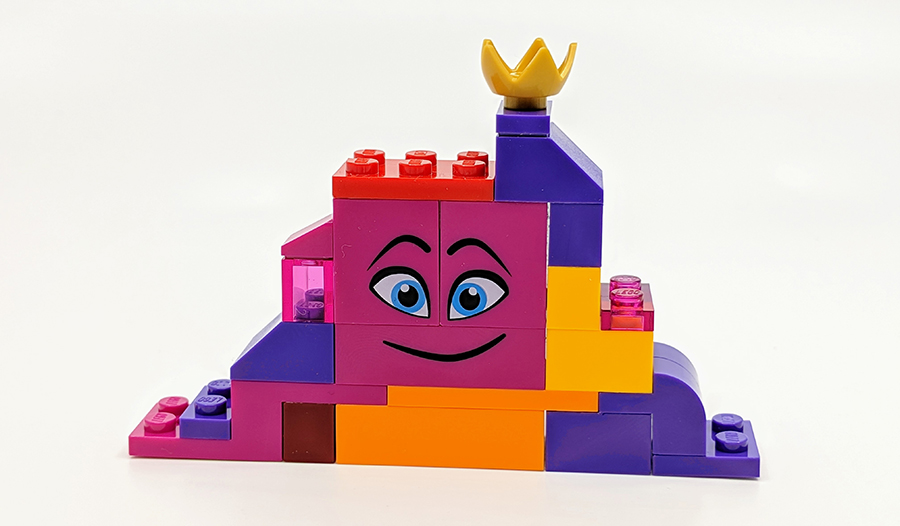 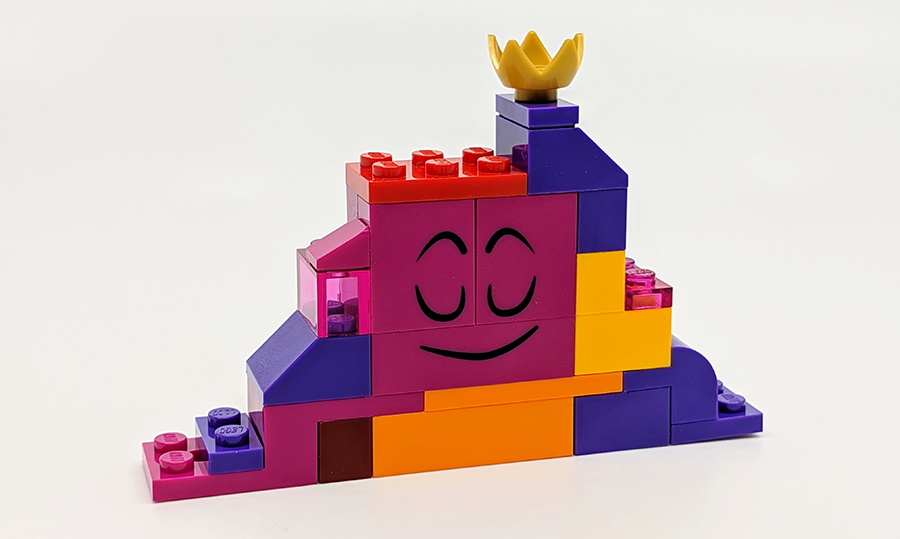 The set includes three non-brick-built characters in the form of Lucy, Susan and Sweet Mayhem. Lucy looks like her normal self from the previous movie, instead of the Battle-ready Apocalypseburg version seen in other sets. Oddly she doesn’t include the hood element, instead it’s printed on the back of her torso. Susan is a Friendopolite or a Friend’s style Mini-doll. She looks a little like a Disney Princess character and uses the Mini-doll skirt element in place of legs. She also has a cape, which is made from the old-style rigid material. But the most interesting of the three is one of the first characters to be revealed for the new movie, General Sweet Mayhem. Sweet Mayhem is a Mini-doll and I know these non-Minifigure characters have divided the LEGO community, but this could be one to change people’s opinion of them. Sweet Mayhem also has a number of new elements including a cool visor, shoulder armour with winged backpack and best of all a uniquely coloured hairpiece. The wings are dual-molded with white plastic inlaid with blue transparent plastic, complete with a sprinkling of glitter. Sweet Mayhem has the same style head as other Mini-dolls, although she looks a little more animated, with slightly bigger eyes and a smirk. 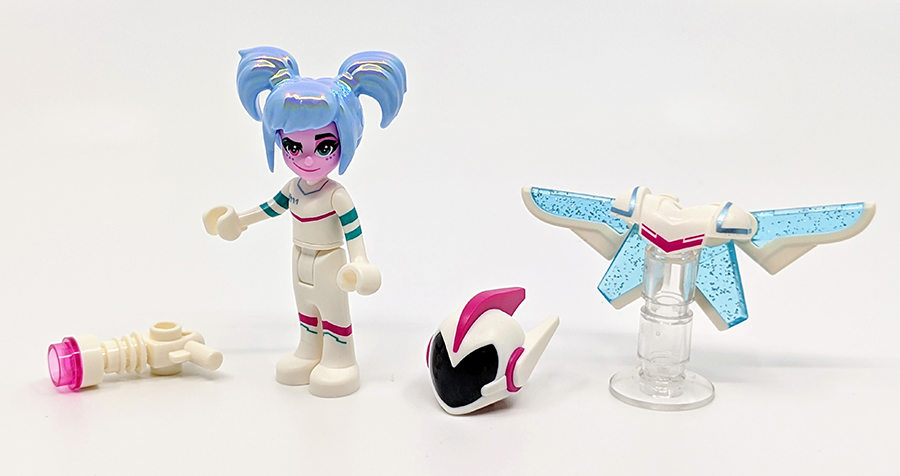 But my favourite feature of Sweet Mayhem is her hair. It’s a twin pigtail hairstyle, which looks a little like Harley Quinn’s. It’s made of the softer material, often used for Mini-dolls, but has a cool rainbow shimmer effect. Something I’ve not seen on a LEGO element before.

These type of character packs are a great way to collect numerous characters from the movie. Although Benny’s Space Squad will no doubt be the most popular, this is just as fun thanks to it brick-built characters as well has featuring characters unique to this set. It’s also the cheapest way to obtain both Sweet Mayhem and Queen Watevra Wa’Nabi. I’ve never disliked Mini-dolls and of course prefer Minifigures, but whatever your opinion on these new style LEGO characters is, you have to admit Sweet Mayhem is pretty cool.