A Look At LEGO…. Racers

LEGO® Games have taken many forms over the years, but before TT Games took the reins and created the LEGO Games we know and love today, various other developers created a varied range of titles. One such game was LEGO Racers, a fairly primitive looking, racing adventure, which introduce the world to driver extraordinaire and Master Builder Rocket Racer. So let’s start those engines and take A Look At LEGO…. Racers. 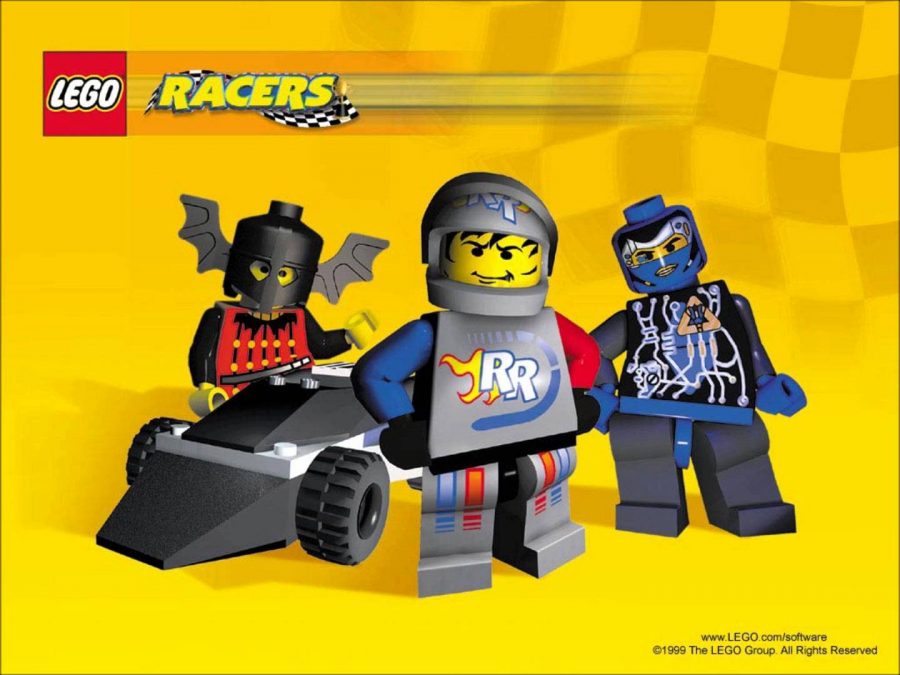 Despite the large number of vehicles found across the various LEGO sets, there has only ever been a couple of LEGO-themed racing games. One of which is LEGO Racers, from developers High Voltage Games. It first launched for Windows in 1999 with PlayStation, Nintendo 64 and Game Boy Color versions appearing shortly after. Character-based kart racers were all the rage in the 90s thanks to much loved Mario Kart series from Nintendo. The original concept behind LEGO Racers was conceived by the studio founder of High Voltage Games, Kerry Ganofsky. The idea was to combine the popular kart racing genre with the ability to build and race cars created from LEGO bricks. Today LEGO Videogames are mainly based on popular licenses like Jurassic World and Batman, but back then LEGO games made use of the numerous LEGO orignal themes like Space, Castle and Pirates. So LEGO Racers was set within the multi-themed world of LEGOLAND. Famed ‘Greatest Racing Champion’ Rocket Racer had beaten every other racer around and needed a new challenge. With the help of a dimensional warp machine, built by fellow racer and scientist extraordinaire, Veronica Voltage, Rocket set about taking on some of the best racers from the history of LEGOLAND®. 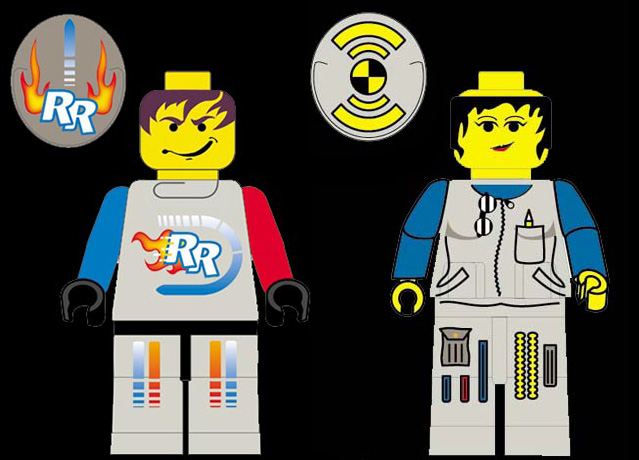 Many popular characters from numerous LEGO sets made an appearance including Captain Redbeard from Pirates, King Kahuka from Islanders, Basil the Bat-lord from Fright Knights and Johnny Thunder from the Adventurers theme. Those famed LEGOLAND legends acted as Champion Hosts within the various race circuit hubs, with other character minifigures joining the hosts on the the track. Rocket Racer and Veronica Voltage were original creations of High Voltage and unlike other racers, they never appeared in a physical LEGO set. Players would take the role of a generic LEGO minifigure, either selecting from a number of pre-built characters or creating their own customs racers from a vast number of minifigure parts. The buildable nature of LEGO also influenced the in-game transportation, cars could be selected from a range of pre-built models or custom creations could be constructed from LEGO bricks. Placement of the bricks would affect the cars handling, with additional elements being unlocked during races, allowing players to pimp their rides and gain a better lap time. During races power-up bricks were dotted about the tracks offering players various short term abilities. Red Bricks bestowed projectile weapons, Yellow Bricks let you drop hazardous obstacles, Blue Bricks enveloped racers in a protective shield whilst Green Bricks offered a handy little boost. These Power-up Bricks could also be upgraded by attaching additional white bricks, increasing the power or effect of the base ability.

Compared to the graphics of today, the visuals of LEGO Racers were quite basic. But just like modern day LEGO titles, only the racers, cars and a small selection of objects in the game were made from digital LEGO bricks. The tracks and scenery were based in generic cartoony lands based on many classic LEGO themes. Pirate themed race tracks would be littered with LEGO palm trees whilst taking a spin round one of the spooky tracks may have resulted in an encounter with a LEGO ghost. Octan seemed to have tied up a pretty exclusive sponsorship deal with both the racers and the tracks hoarding, featuring their logo alongside tracks and on racers jumpsuits, of course it helps when you are the only company to exist in LEGOLAND. Much like the development of LEGO Universe, various LEGO Design teams worked closely with the games developers to ensure their themes were represented correctly. Physical assets, designs and concept art were shared with High Voltage, who choose what would best fit within their vision for the game. Despite the basic tracks and scenery, circuits were nice and varied. Many tracks were filled will sneaky shortcuts giving players alternate routes through tracks and allowing them to get ahead of other racers. Some of these could be opened by the player interacting with the environment or triggering them with power-ups.

The game contained three single-player modes: Circuit Race, Single Race and Time Race, along with a Versus Race multiplayer mode. In Circuit Race players would take on 5 other racers across multiple tracks, earning points depending on where they finished. Earning enough points would allow you to move on to the next race, completing the circuit in the top 3 ranks gives you a shiny trophy and unlocks another Champion Racers course. In Single Race mode you can take on any of the tracks unlocked from the Circuit Race mode. Time Race mode let you race against Veronica Voltage driving a ghost car with the aim of beating her best time. Before online gaming became a thing people would play together in the same room, so LEGO Racers included a Versus Race mode, allowing two players to race against each other in a split screen view.

High Voltage spend over a year crafting the build system, it may appear basic compared to todays video games, but with a huge number of elements to build with, the developers had to created a program with would blend the individual elements into a single model. A special program was created which meshed together the bricks placed by players, thus allowing the game system to handle the content easier.

The game was well received by fans but critics argued it lacked the character and polish of other kart racers. The generic worlds lacked the fun of the LEGO themes they were trying to emulate. The A.I of other racers was also questionable, many tracks could be tackled with ease and with an amazing lead over other racers, almost giving players too much of an advantage and making the game less of a challenge. LEGO Racers was certainly leagues behind it’s racing stablemates like Mario Kart and Crash Team Racing, but the ability to build characters and crafting cars gave it a unique feature.

LEGO Racers did well enough to spawn a sequel, LEGO Racers 2 was released in 2001 with development duties passing to Attention To Detail. The game once again featured tracks and racers based on popular LEGO playsets, but it also gave us a range of LEGO Racers playsets. These featured alien-type racers known as Xalax. Most sets included a Xalax figure along with a vehicle. Within the game Xalax was the last themed world players would race around. Despite the name, the LEGO Racers video game has little in common with the other LEGO Racers playsets. These have appeared in various guises over the years and have recently evolved into the new Speed Champions theme. There has also been a nod to Rocket Racer in the 40th Anniversary LEGO Minifigures series, with the Race Car Driver featuring Rocket Racers logo on his race suit.

LEGO Racers had its flaws but it did offer a fun LEGO themed racing experience, it would be great to see current LEGO gaming experts TT Games tackle a LEGO racing game, using the formula they have perfected with modern day LEGO titles and coupled with  the power of modern day consoles and mobile devices. Just imagine crafting your own tracks using the LEGO Worlds engine. 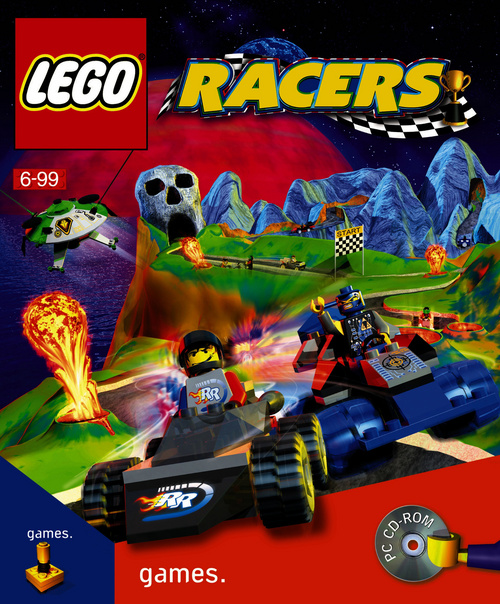