A Look At LEGO… Monster Fighters

This week we’ve been troubled by strange noises in the middle of the night, we’ve experienced feelings of dread in our basements and LEGO® brick buckets, and we think we may have seen a spook, spectre or ghost, although it could’ve just been one of those glow-in-the-dark ghost minifigures. So who were we going to call? The LEGO Monster Fighters of course. Not only to rid us of these spooky happenings but to also celebrate them, as we take a closer look at spooky LEGO Monster Fighters theme. 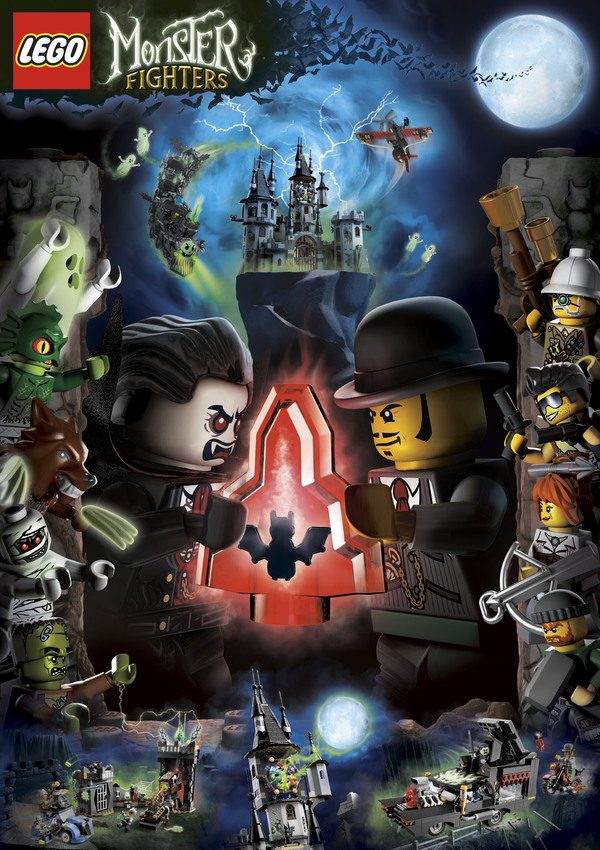 LEGO Monster Fighters line was launched in the not-so-spooky month of May 2012, LEGO had previously had the odd spooky encounter with the Collectable Minifigure range and various sets from the LEGO Studio and Pharaoh’s Quest lines, but this was the first time an entire theme was devoted to it. There were nine system sets released during 2012, one of which was a LEGO D2C exclusive. These were joined by three smaller polybag sets, available through various promotions and giveaways. Shop.LEGO.com also listed the three Minifigure Halloween Accessory Set under the Monster Fighter theme, although it wasn’t actually a Monster Fighters branded product. 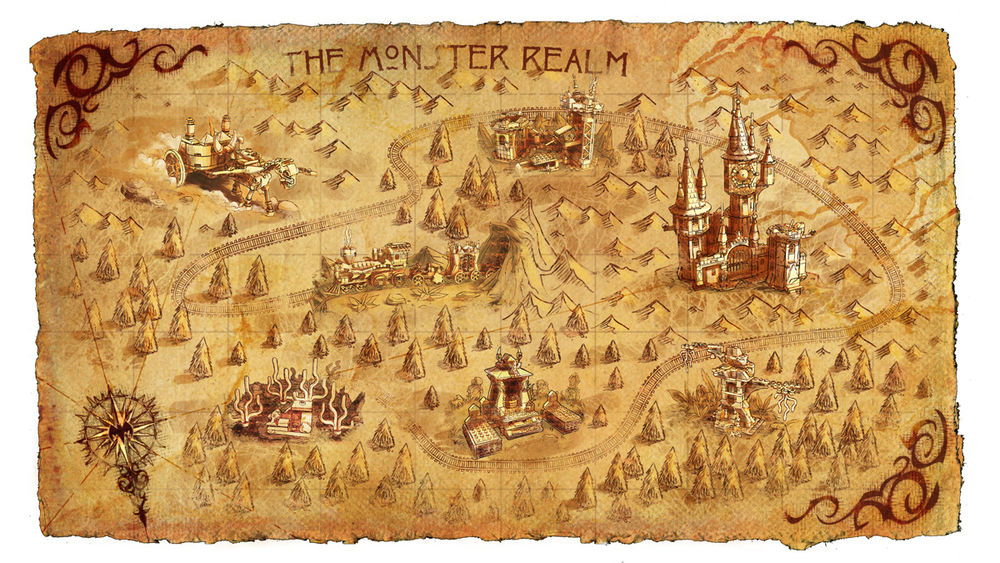 As with many of LEGO created themes, Monster Fighters was backed with an engrossing storyline. Lord Vampyre, a powerful vampire, was pestered by his wife to get her a powerful Moonstone, but when Lord Vampyre finally found one, he realized the magical power it possessed and decided to keep it for himself. If six of the seven Moonstones were brought together, they would eclipse the sun and turn day into night forevermore. The Monsters would then be free to roam the Minifigure realms. To defend the earth from this spooky new threat, Dr Rodney Rathbone brought together a band of fearless monster fighters to obtain the Moonstones before Lord Vampyre collects them all and unleashes their power on the world. The Monster Fighters included Frank Rock, Major Quinton Steele, Ann Lee, and Jack McHammer. With The Monsters being made up by The Zombies, The Ghosts, The Werewolf, The Mad Scientist and his Monster, The Mummy, The Swamp Creature, Lord Vampyre and his Bride. 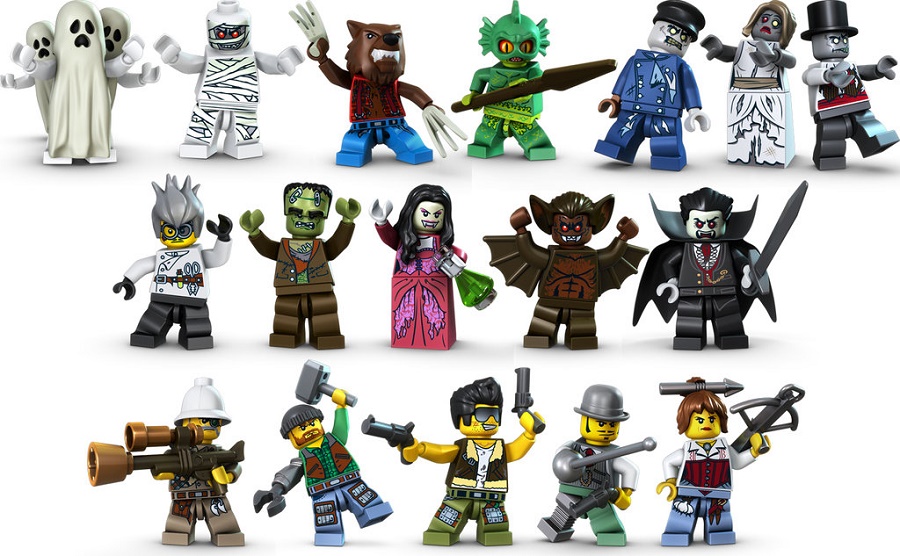 Matthew Ashton, Vice President of Design at LEGO, discussed the idea behind the Monster Fighter Theme.

“Younger kids look up to older kids and want to be part of what they are engaging in,” he says. “We have dabbled with a few monster-based products in the past, but we really wanted to dedicate a whole line to this theme so kids could play out multiple adventures with a deeper story.” LEGO found that Monster Fighters and its characters were quite similar to the instantly recognizable Universal Studio monsters from classic cinematic horrors, which appealed to both kids and adults alike.

Matthew and his team also wanted to give more depth to the Monster Fighters theme, giving a greater purpose for battles between good and evil. With Lord Vampyre’s plot to create a total eclipse and plunge the world into darkness, so he and his fellow monsters can rule the earth, they had created the perfect reason for some brave heroes being needed to stop them. But creating these heroes would prove a little tougher than the bad guys. LEGO had tested various different lineups, from Scooby Doo-like gang of teenagers armed with makeshift weapons to a Ghostbustersesque “monster pest control team” but none of the original heroes clicked very well with kids during focus testing. 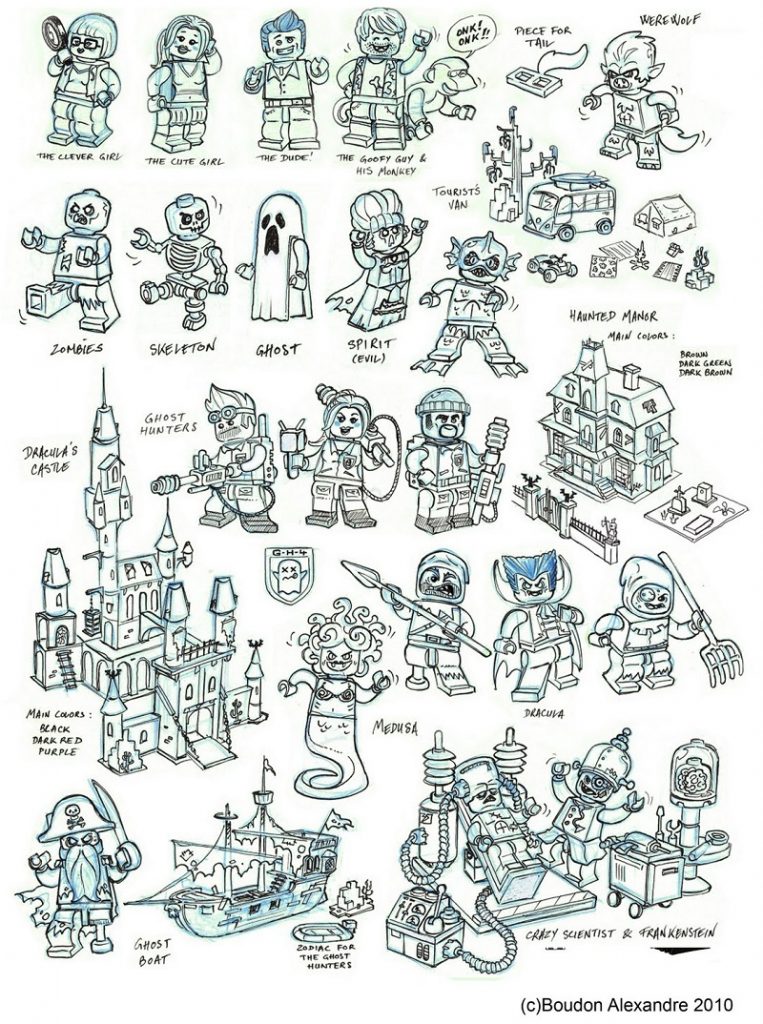 “What we needed was a team of heroes that looked like they had been fighting monsters for years — a rag-tag team of distinct individuals whom you could associate unique monster-fighting skills with,” Matthew says. So the Monster Fighters were born, fearless leader Dr Rodney Rathbone, shades wearing Frank Rock, highland lumberjack Jack McHammer, weaponry expert Ann Lee and big game hunter Major Quinton Steele.

“We went so far as to give them some replacement bionic body parts,” Matt says. “This allowed the kids to imagine that these characters were stronger both physically, with their specially made mechanical limbs, and emotionally, giving the team that extra determination they’d need to defeat the monsters and save the world.” The Monster Fighters theme let the imaginations of Matthew and his team run riot, they borrowed many of the new elements created for Collectible Minifigures range such as the cave woman’s hair for Ann Lee, the musketeer’s sword for Dr Rathbone and The Monster’s head for the Mad Scientists wicked new creature creation. “An image of a werewolf or a vampire in a kid’s head could potentially be quite terrifying,” he adds, “but once it has been squeezed through the tongue-in-cheek LEGO filter and lovingly applied to a blocky little figure with a trapezoidal torso, and given some oversized comedy fangs and claws, suddenly something scary becomes something fun.”

Once the direction of the Monster Fighters theme had been finalized, the team set about creating a number of varying sized system sets. As the concept art revealed some of the earlier ideas such as the Haunted House and Lord Vampyre’s Castle made it through to the final design stage, whereas The Werewolf and The Crazy Scientist & His Monster were reimagined versions of The Werewolf Ambush and The Scary Laboratory sets from the movie-themed Studio line from 2000. Unfortunately, ideas like a Pirate Ghost Ship never made it to the final collection of sets. 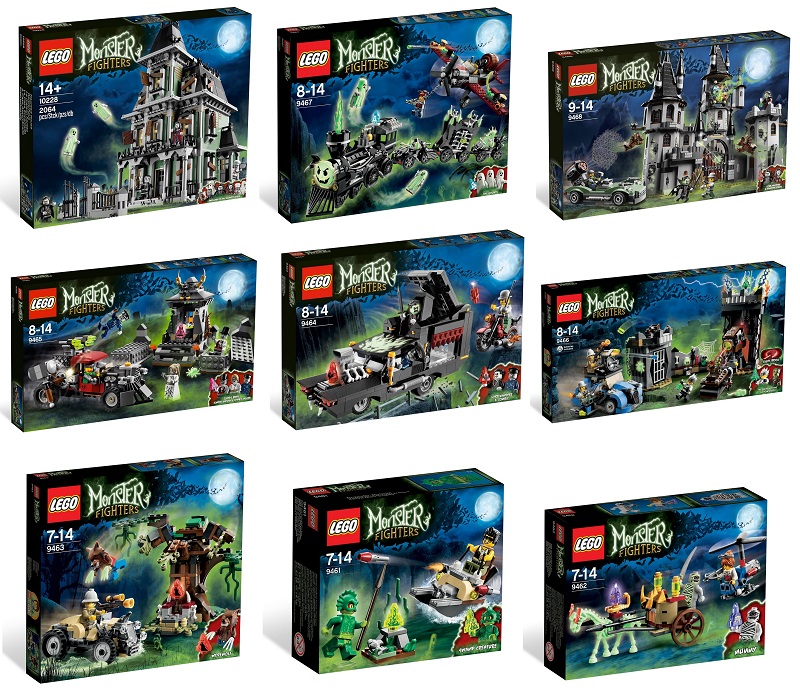 The final line-up of the Monster Fighters theme consisted of 9 system sets and 3 promotional polybags.

The theme may have been laid to rest in the monster realm in 2012, but it still remains one of the most inventive and character-filled of the LEGO created IPs. Many of the characters from the Monster Fighters sets live on in digital forms in LEGO Worlds, with even more sets and builds from the range included in the recently released LEGO Worlds Monster Pack.