Animals play an important role in Asian culture and that’s very evident in the new LEGO® Monkie Kid theme. Since the theme was introduced in 2020, it’s featured a mix of vehicles and mechs inspired by the Journey to the West story. This ancient Chinese legend has been retold in many forms, most will fondly remember the Japanese take known as Monkey or Monkey Magic. The brick-built take from the LEGO Group gives the story a modern twist, which has also inspired some of the upcoming new sets. One such set is the Monkie Kid’s Lion Guardian, which nicely blends the ancient origins of the story with the updated reimagining found across the Monkie Kid sets. In Asian culture, Lion Guardians are often found outside of temples or important locations, where it’s believed they offer powerful protection. Which is the case with the Monkie Kid’s Lion Guardian, which our hero uses to take on the continuing threat of the Spider Queen’s menace. So here’s my review of the Monkie Kid’s Lion Guardian set. 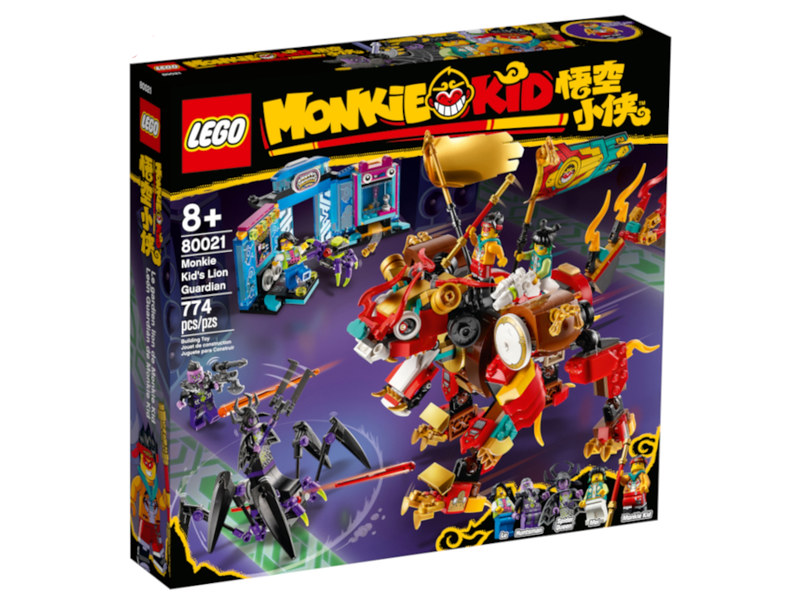 Youngsters will love showing off this action-packed LEGO® Monkie Kid™ Lion Guardian playset (80021) to their friends. It features a fully posable Lion Guardian mech toy with 2 hidden spring-loaded shooters, the Spider Queen’s battle rig with movable legs and 2 spring-loaded shooters, plus a posable robotic spider. A great gift for trend-setting kids, this set also includes a buildable arcade with a toy-grabbing claw game that dispenses toy elements, plus 5 minifigures with cool weapons for role-play battles. 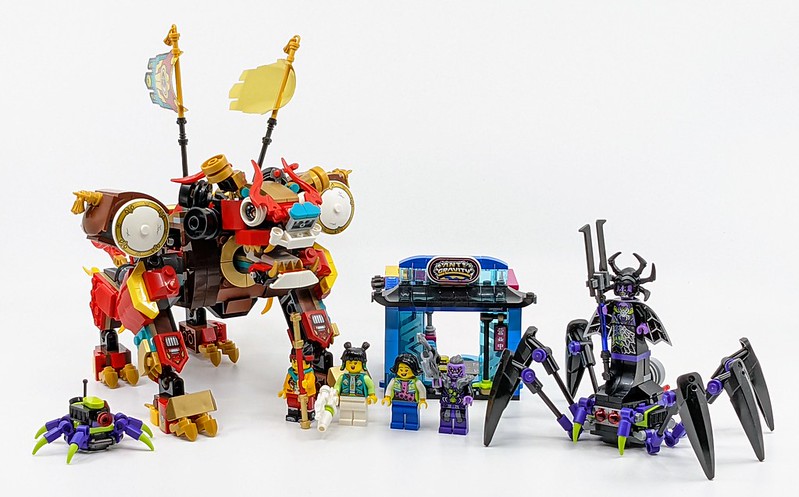 The set consists of three elements – the Lion Guardian mech, the Spider Queen’s battle station and an arcade. Which is where the build begins. The arcade is a small square build that can also be opened out to better show the inside. Where you’ll find a couple of arcade staples. These include a Dance Dance Revolution-style rhythm action machine. There’s also a ‘working’ crane grab machine. This allows you to jiggle an arm, which causes a prize to drop out of the machine. Is a fun little play feature and seems to be part of a number of ‘functional’ machines in LEGO sets, with a working arcade game in the recent NINJAGO City set and other Monkie Kid sets also feature similar machines, with working functions. 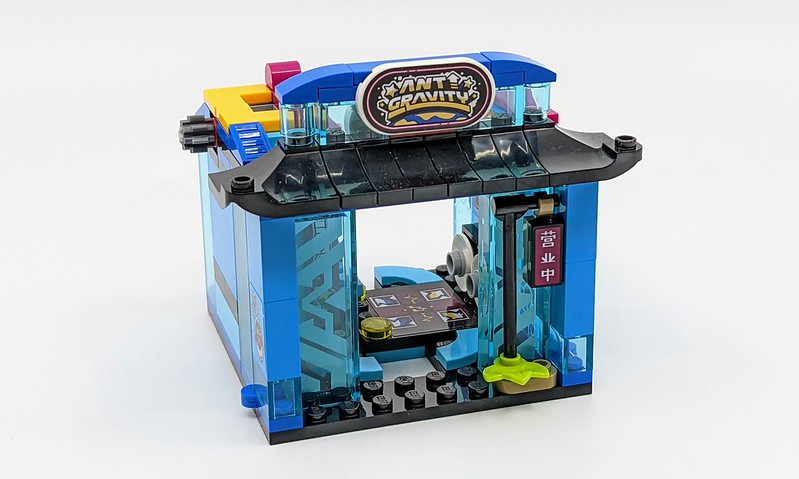 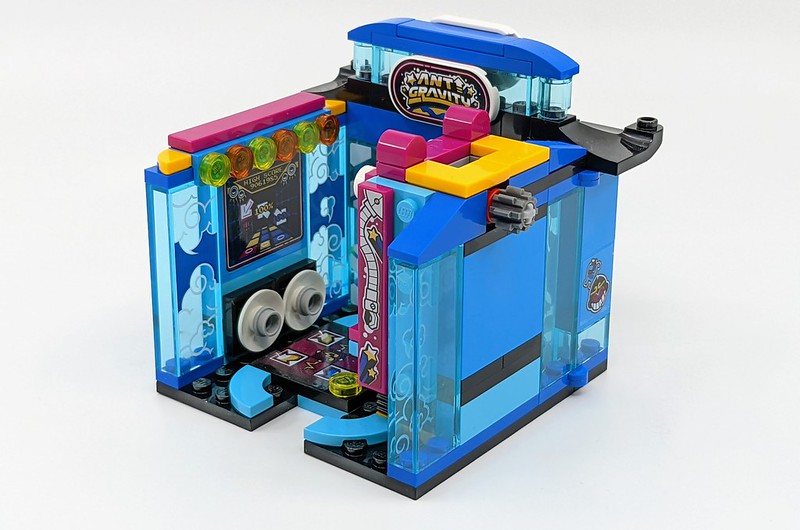 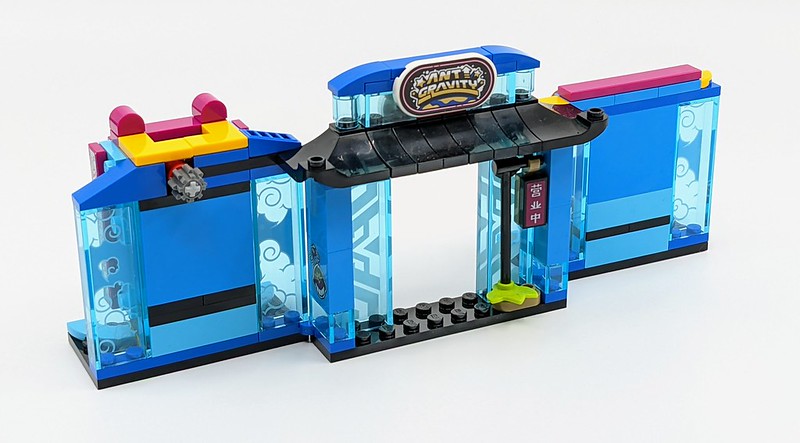 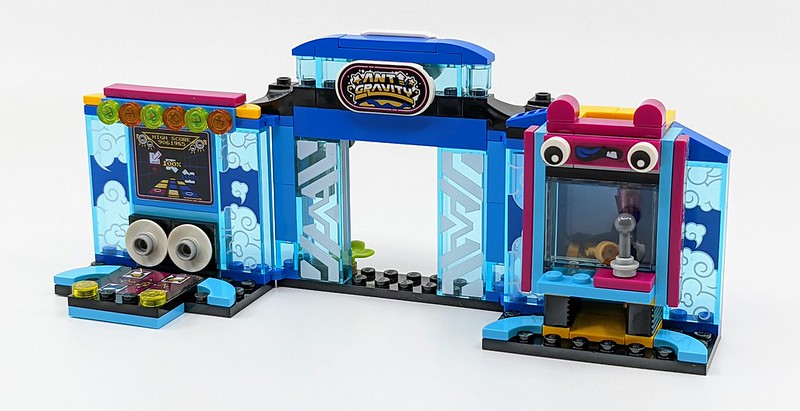 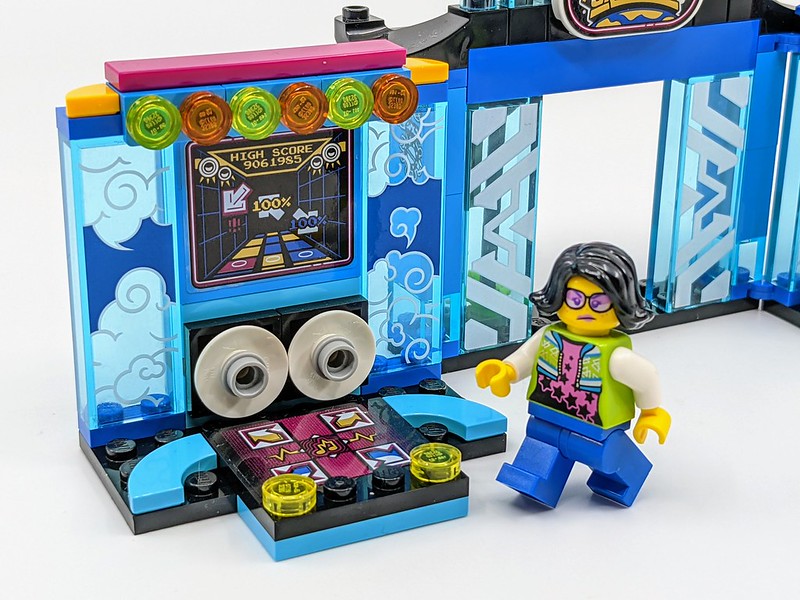 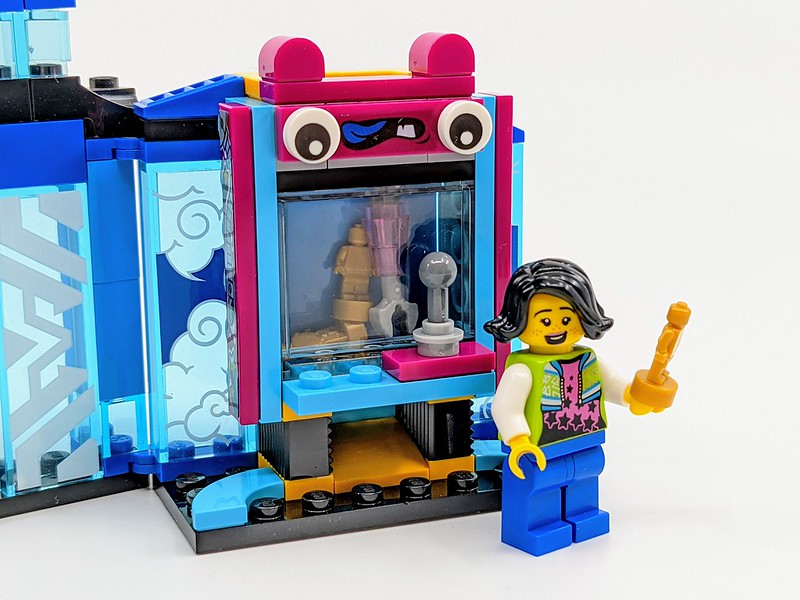 The Spider Queen is a major focus of the second season of the Monkie Kid TV show, she appears in this set on her mobile battle station. As with most of her technological toys, it has a spider-like appearance. So the battle station is a simple platform, upon which the Spider Queen Minifigure can be placed. There are two flick missiles underneath the platform, these double up as a pair of beady eyes. Despite the Spider Queen’s arachnoid connections, there’s a running trend of missing legs off of her various vehicles or robots. Her battle station only features six legs, but still looks very spider-like. She’s joined by a robotic Spider-Drone, which is a similar build to the one found in the Arachnoid Base set. However, it features a camera device making it a surveillance version of spider-like drones. 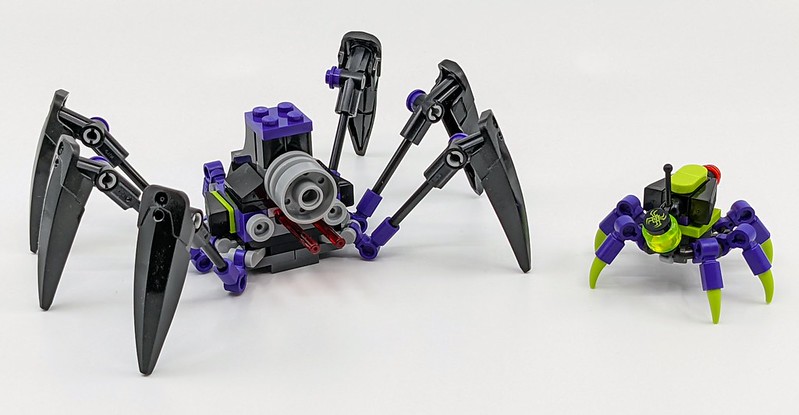 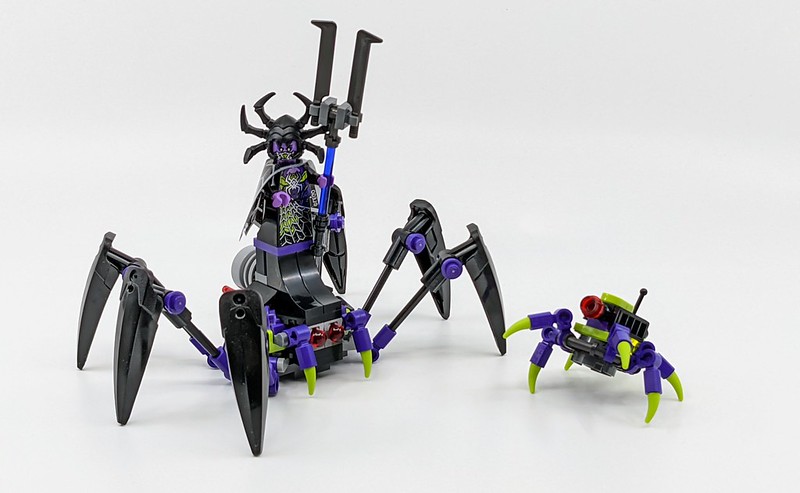 The biggest part of the set is a surprisingly large lion mech. With animals playing a major part in Chinese culture, as well as Journey to the West story, they also feature heavily in the Monkie Kid sets. Lions are often found as guardians of entrances so they are the perfect inspiration for a mech to aid MK in battle. The unique appearance of creatures in Chinese culture has helped to guide the style of the Lion Guardian mech. In all honesty, it doesn’t look much like a traditional lion but there are enough features of the creature to warrant the naming. Plus it has a similar appearance to those long dragon-like creatures you often see dancing in the street, with multiple performers inside working them. These are also known as lions. So this stylised appearance is a long-running tradition. 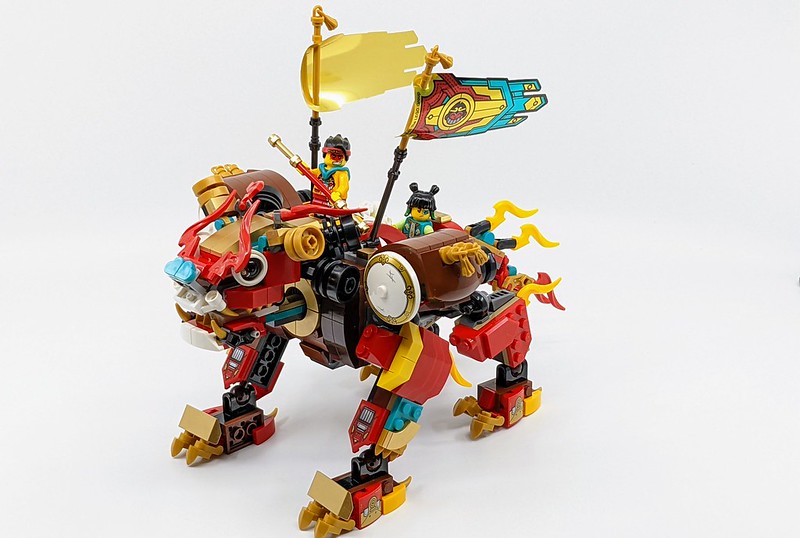 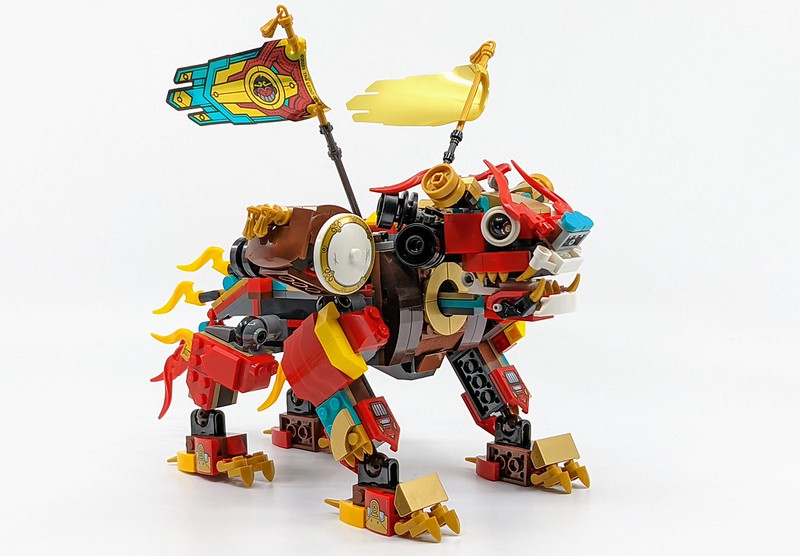 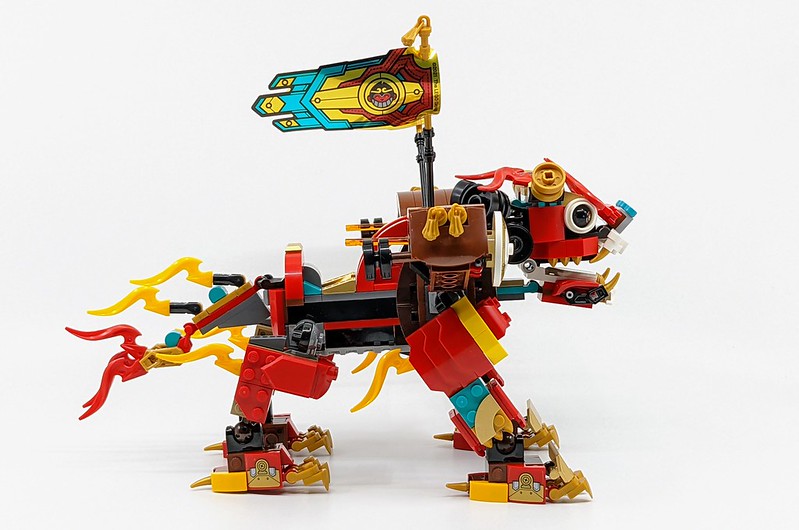 Style aside, there’s a couple of neat features built into the set. The bottom jaw of the head section is built independently of the rest of the set and is slotted into the body via the neck area. This allows the mouth to be open and closed by sliding the column, which sits along the groove in the back. This section is also a seat, but the Minifigure must be removed in order to work the mouth. There’s also a pair of flick missiles hidden within a couple of ornate barrels mounted on the front of the Lion Guardian. These can be rather satisfyingly flipped down in order to reveal and launch the missiles. 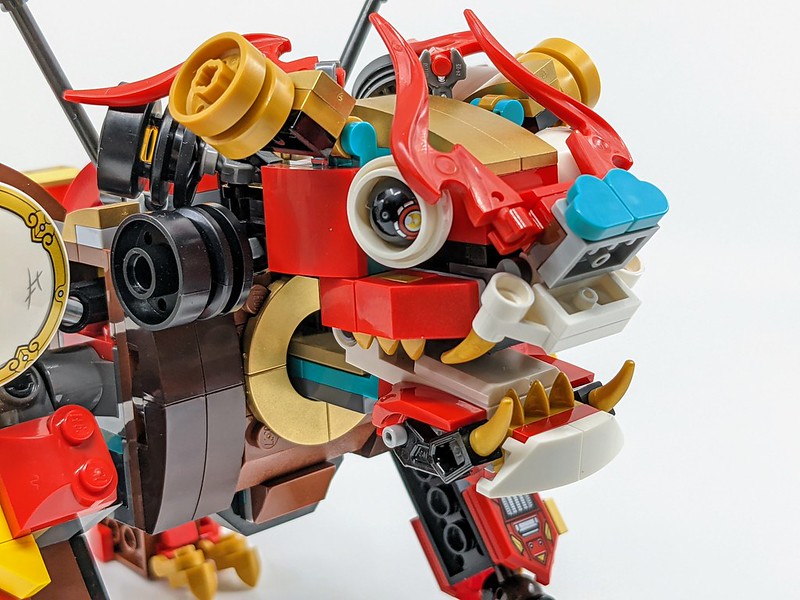 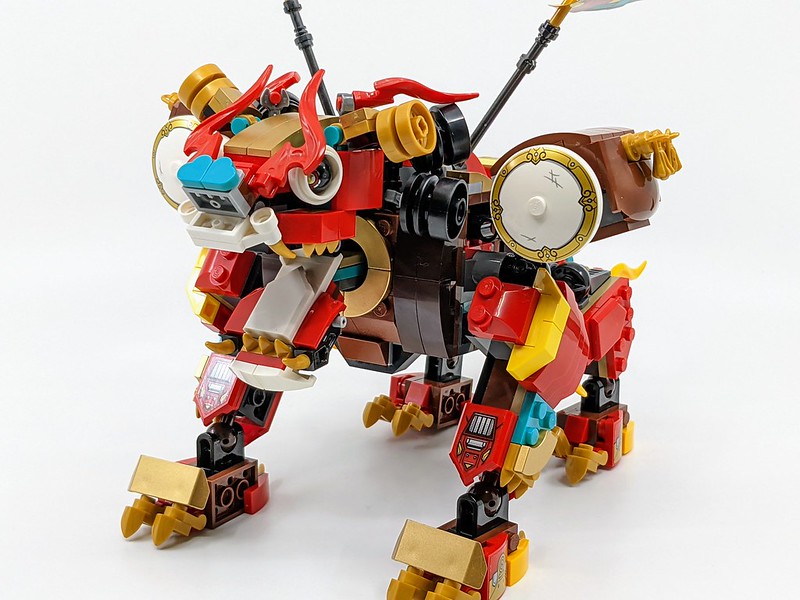 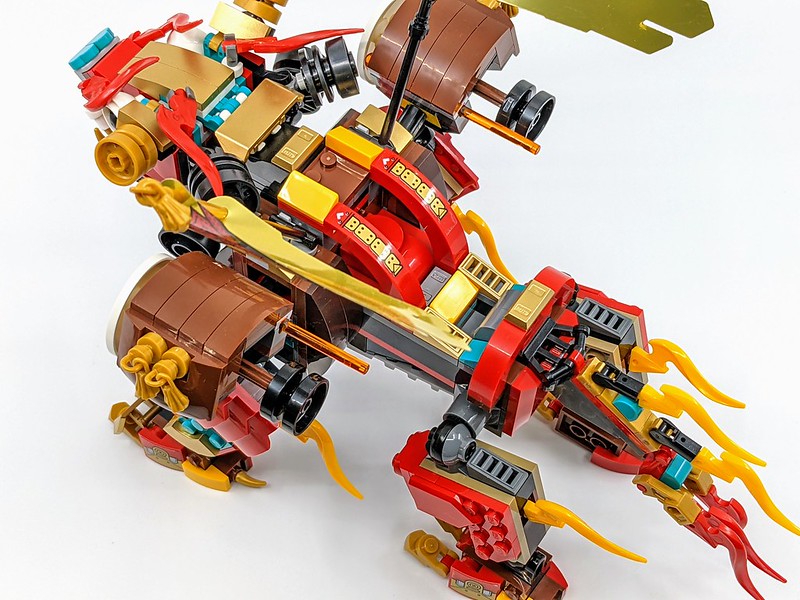 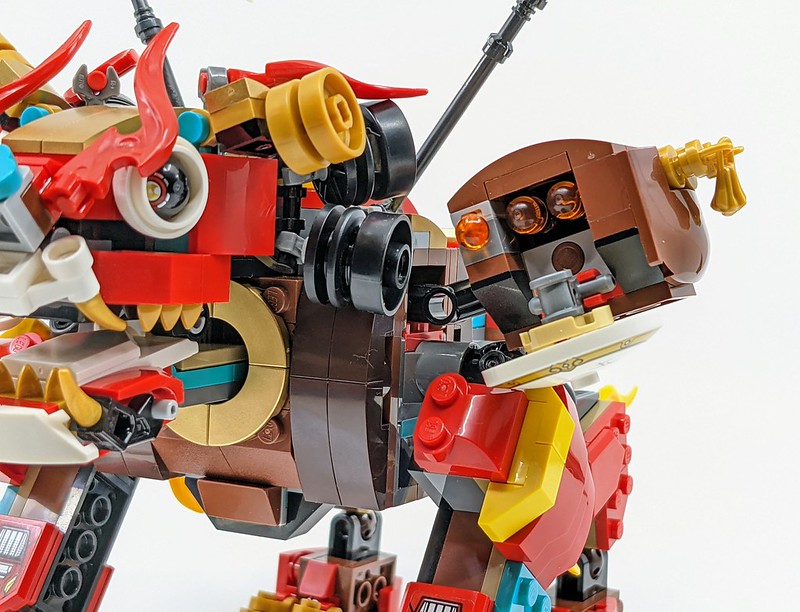 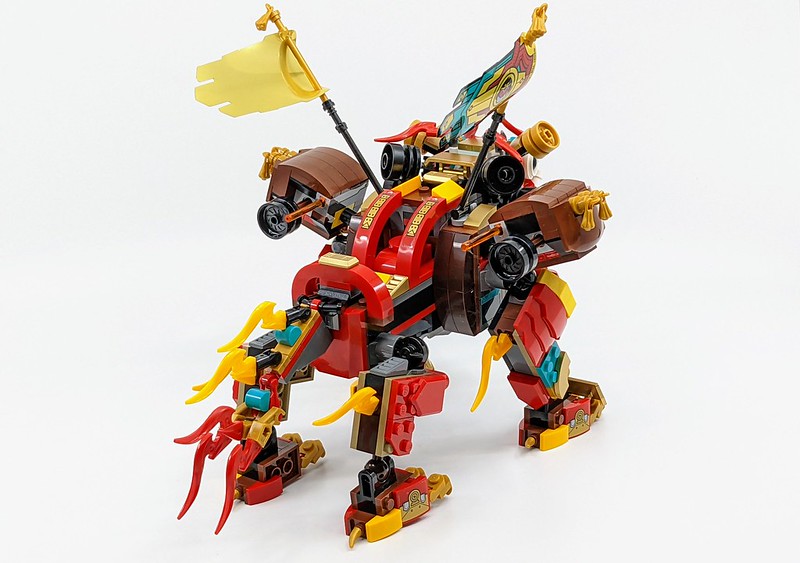 Each of the legs features a couple of different jointed sections. However, they offer limited movement due to the shape and size of the set. Although you can get a few slight poses using going on. The unique style of the Chinese lion features plenty of extra bells and whistles. These are captured on the set via the layering of different elements and colours, along with the use of plenty of curvy pieces. These are mainly focused on the tail section. There are also two banner flags, which use a rigid, shiny material. 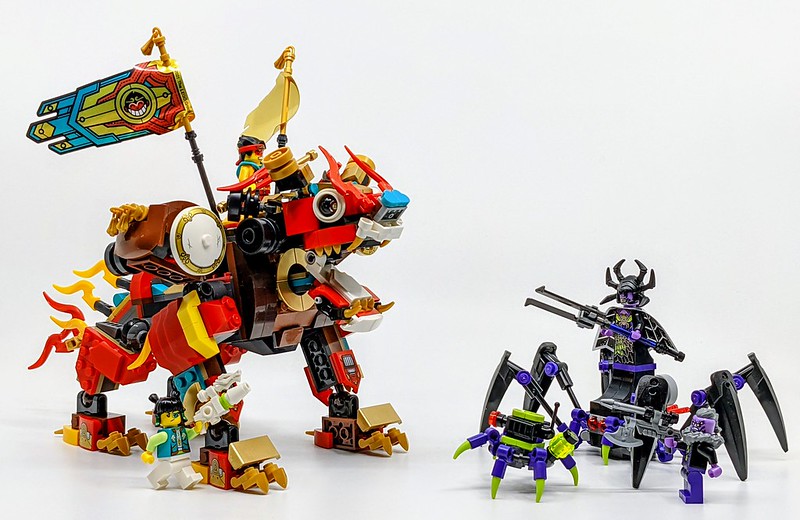 The set features five characters including MK, Mei, Spider Queen, Huntsman and Lu. Monkie Kid features a mixture of styles. His outfit is new for 2021, with a monkey emblem on his jacket and the warpaint smeared face design from past sets. MK is joined by Mei, a descendant of the White Dragon Horse. She hasn’t had a visual upgrade for these new sets, so she features the same outfit from a couple of previous sets, which has some nice print details, especially on the back of the jacket. A running trait with the Monkie Kid sets is the inclusion of random civilian characters. Here we get Lu, who is a pretty cool looking character compared to some of the other supporting characters. She’s kitted out in a flash jacket, which has some pretty intricate detail on it. She also has a great alternate face, which sees her donning glasses, perfect to help focus on hitting that top score on the arcade dance game. 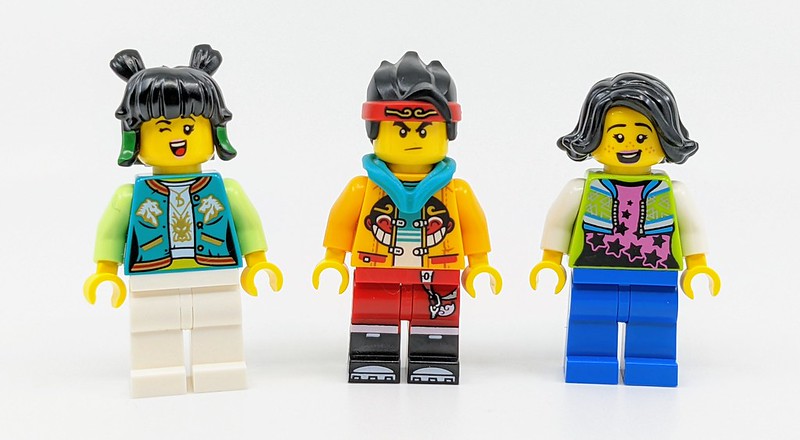 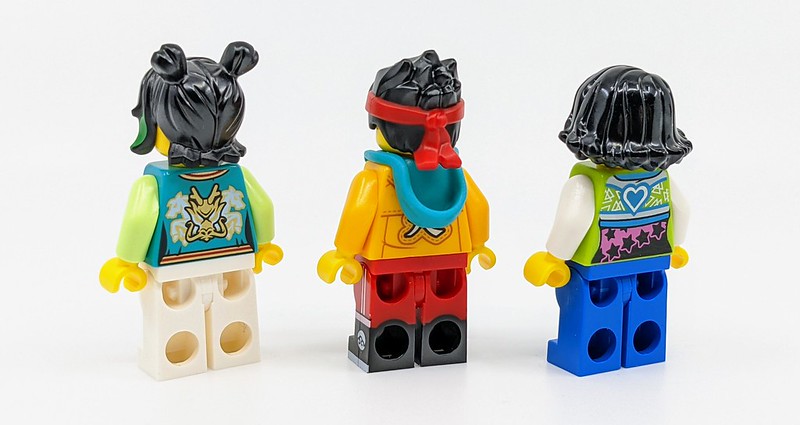 Wherever Monkie Kid is, the bad guys aren’t far behind. With the set featuring the Spider Queen and one of her henchmen. The Spider Queen had a slightly tweaked appearance for her second outing. Although her outfit is primarily black, it now features splashes of green and purple, which matches her huge Archanoid Base. Her prong-like staff from her debut appearance also returns. She is joined by her henchmen, the Huntsman. Named after the well-known spider, Huntsman doesn’t really share much with his insert namesake. But has similar spider-like qualities to his spider army chums. This includes light purple skin and a detailed outfit. This is given extra depth, with a fuzzy collar element previously used Kraven the Hunter, in the Marvel sets as well as a bird’s nest in other sets, recoloured in Dark Bluish Grey. He is also sporting a new mohawk-like hairstyle, this is similar to the part used for Taserface from the Thor Ragnarok sets. These two elements combine really well. 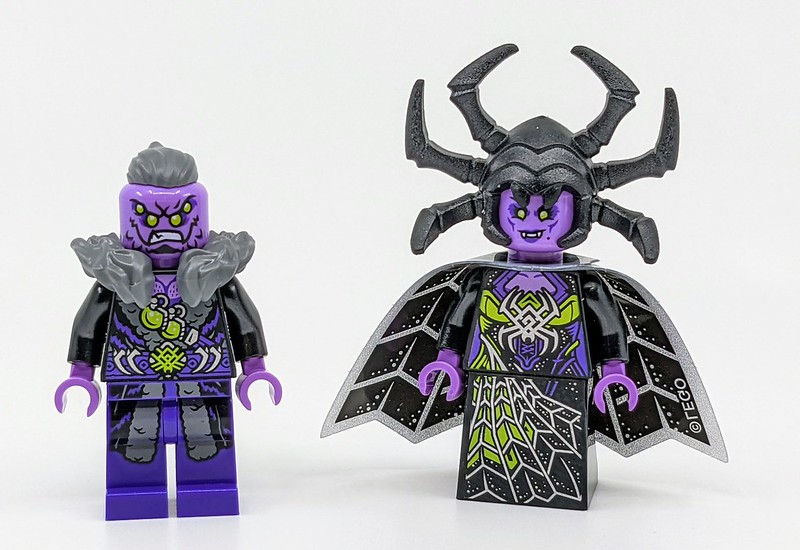 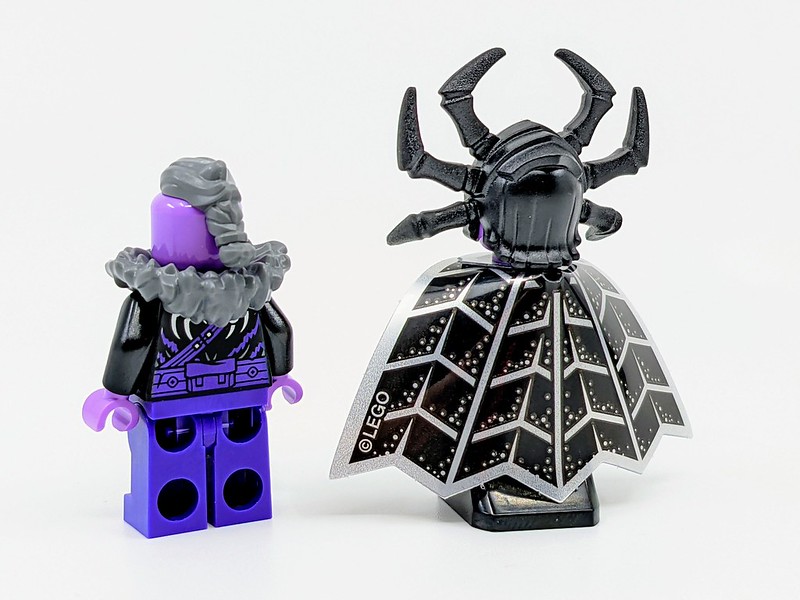 With animals a key aspect of Chinese culture, it’s great to see the different ways they are interpreted in LEGO form and woven into the Monkie Kid story. The stylised version of the lion is also a common element of Chinese celebration. Seeing how this has inspired a mech-like build is also quite impressive. I like the simple play features the set contains, especially the hidden bolt launches. The Spider Queen’s battle station platform adds something a little different to the character and when she’s placed upon it, it looks like an extension to her, instead of being something she stands on. The Anti Grav arcade build seems like an unnecessary inclusion as it has little to do with the rest of the set. But it’s one of my favourite parts of the set. It’s greatly detailed and I love the inventiveness of the crane grab machine.