Since the LEGO® Super Heroes theme was introduced, it’s given us a mirage of sets based on the most iconic super folk around. Split between DC and Marvel, within each side of the theme, other sub-themes have emerged including many focused around Spider-Man. The webbed wonder has inspired many of the new superhero sets being released on January 1st. One of which sees the return of two fan favourite Marvel characters. Spider-Man and Ghost Rider team up to take on the Symbiote offspring of Venom – Carnage. So strap yourself in for another 2021 set review as I take a closer look at set 76173: Spider-Man and Ghost Rider Vs Carnage. 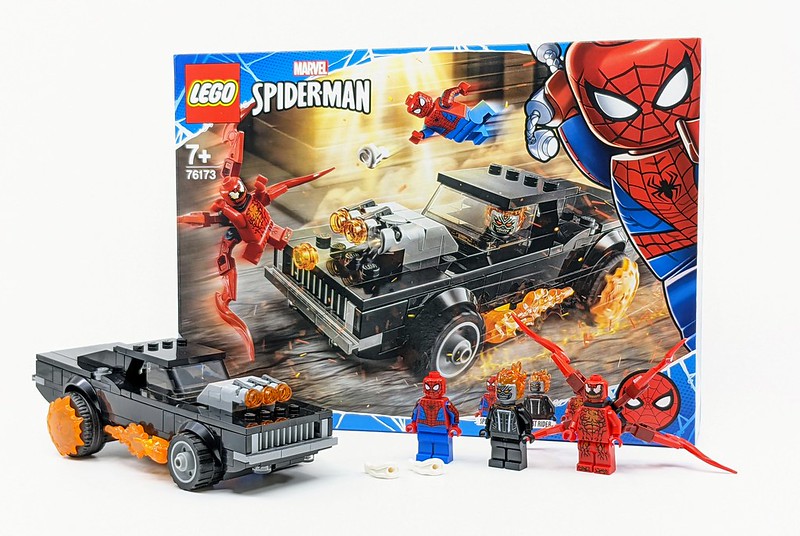 Amazing, blazing Marvel megastars!
Young superheroes are in for non-stop, red-hot action and adventure when teenage web-slinger Spider-Man and super villain Carnage come together with walking-inferno Ghost Rider and his flame-covered, 3-stud shooter supercharger-equipped car. This fun-packed playset will provide kids with endless excitement and entertainment as they build, play out and display scenes with the thrilling trio. For extra creative fun, the downloadable LEGO Building Instructions app includes digital Instructions PLUS, which allows kids to zoom, rotate and visualize their playset as they build.

The main focus of the set is Ghost Rider’s vehicle the Hell Charger, which is based on a Dodge Charger. Although neither names are explicitly expressed in the set, the inspiration of the real-world vehicle is clear. The car has a very familiar feel to it, that’s because it’s almost the exact same style of the build as the Dodge Charger feature in the Speed Champions theme. The Hell Charger is a little meatier, with slightly bigger wheels used at the rear of the car, giving it a cool sloped angle. 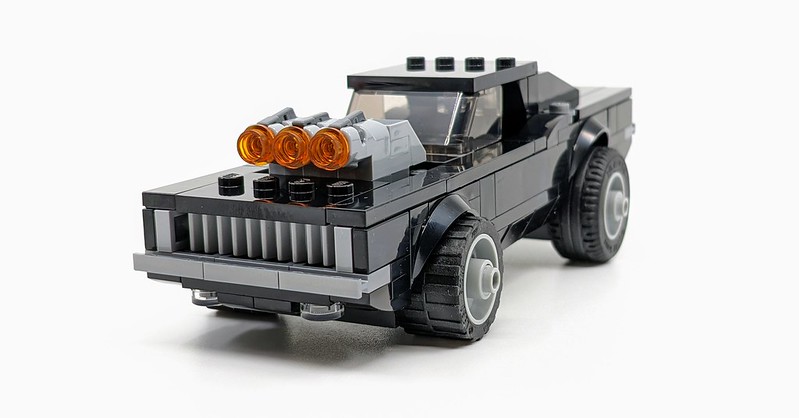 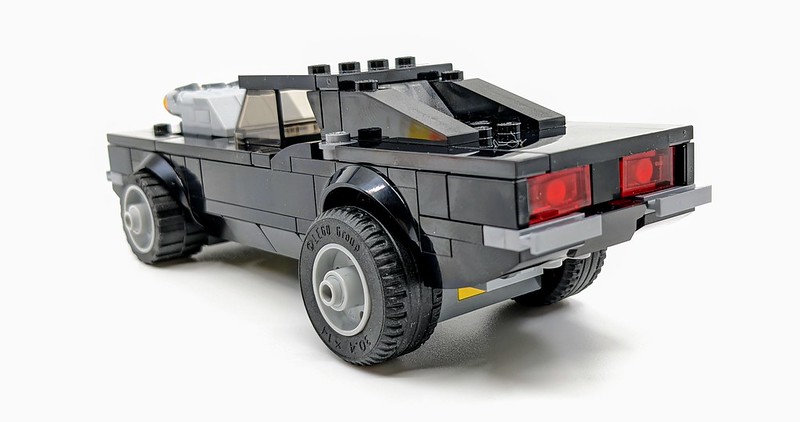 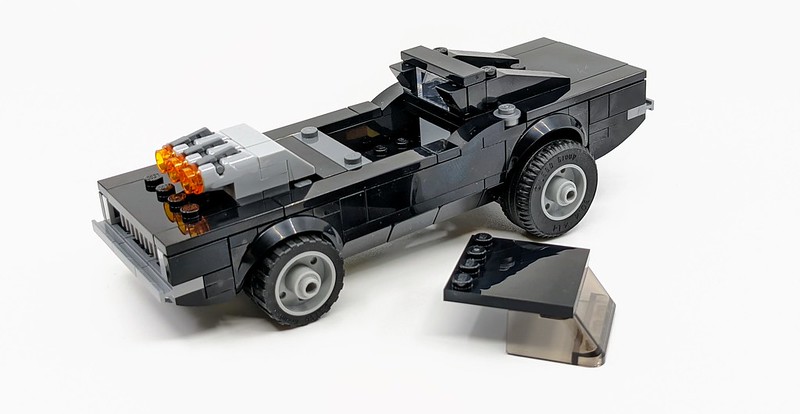 Although the overall build of the Hell Charger is similar to the Speed Champions version, the front end has a few differences. The grill is more prominent and mean-looking thanks to the toothed bar element. The exposed engine is also tweaked to include a trio of stud-shooters. Hey, it wouldn’t be a superhero set without them, although they do work well, in appearance, not as a weapon.

Another new aspect of the Super Hero sets is a collection of effect elements. Most come is a bag of their own and are used to denote powered blasts, spiderwebs and other similar superpowers. Here they are used to add flame effects to the car. A couple of pieces need to be removed to add them to the back and sides of the car, as well as being added to the wheels. Sometimes they feel tacked on, but I think they look great when combined to the muted colour of the rest of the car. 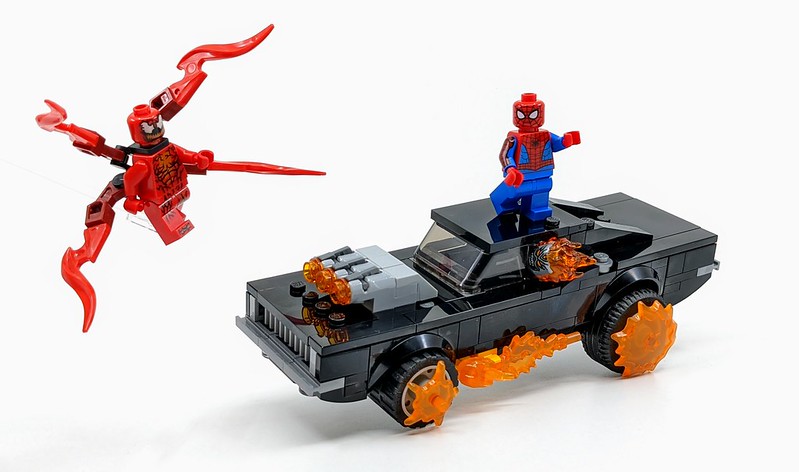 The set features three Minifigures – Spider-Man, Ghost Rider and Carnage. Obviously, we have had numerous versions of Spidey over the years and there is only so much you can say about them, however, one thing that is different is his arms. Printed arms seem to be the in thing with the new LEGO sets. Apart from a few of the Spider-Man sets based on the MCU movies, standard Spider-Man Minifigures have featured plain arms, but here Spidey has the web patterning printed on his arms. Admittedly the red being printed on a blue surface results in a much darker red than the rest of his suit.

The other two Minifigures will certainly be a draw for Marvel fans. Joining Spider-Man are much loved Marvel characters, Ghost Rider and Carnage. Ghost Rider has possessed a number of different people over the years, most well known is Johnny Blaze, but the version we are treated to here is Robbie Reyes. The Minifigure uses a similar headpiece to the other Ghost Rider, so the flaming ‘hair’ is fixed to the head element. This version of Ghost Rider also has a more robotic looking skull, similar to his comic book appearance as opposed to his time on Marvel’s Agents of SHIELD. The rest of the Minifigure is fairly plain, although his iconic leather jacket, with its white boxed panel, pulls the overall appearance of the character together nicely.

Carnage has appeared a few more times compared to Ghost Rider, with the character having a close association with both Spider-Man and Venom. Similar to Venom, Carnage is an alien Symbiote which takes over a host body. Although it’s not clear which version is featured here, Carnage’s appearance is fairly similar regardless. Which is also the case for the Minifigure version. The latest version has a little less of the black veins and a larger yellow patch on the chest area. The tentacles are also very different, I think I prefer previous versions of the tentacles, although I like red ‘Tribal Flame’ bit, it looks a little odd combined with the ‘Bad Robot’ arm. 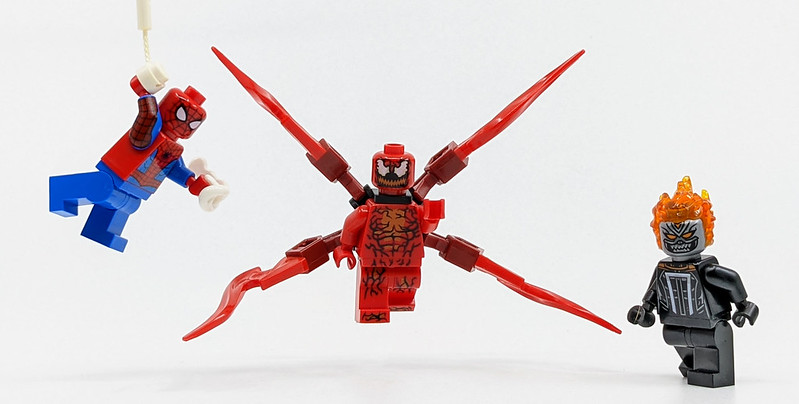 Both Ghost Rider and Carnage have made limited appearances in LEGO form. Ghost Rider’s first and only appearance was in set 76058: Spider-Man: Ghost Rider Team-up from 2016. The version included in that set was Johnny Blaze, along with his motorcycle. Carnage has been a little more prevalent appearing in a couple of Marvel and Spider-Man sets. Its first appearance was set 76036: Carnage’s SHIELD Sky Attack. You can see a comparison of both characters first and most recent Minifigures below. 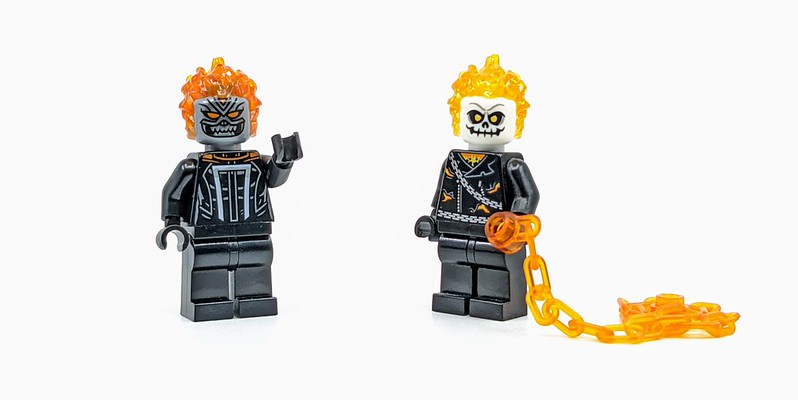