The End (game) is near but before over 10 years of Marvel movies cumulates in next Avengers movie, the MCU is set to don a shell suit and rave about Push Pops once more, in the 90s based Captain Marvel movie. Set in 1995, Captain Marvel follows Carol Danvers, a former U.S. Air Force fighter pilot, as she turns into one of the galaxy’s mightiest heroes and joins Starforce, an elite Kree military team, before returning home with questions about her past and identity when Earth is caught in the center of a galactic conflict between two alien worlds. The movie is supported by a single new set, which is part of the LEGO® Marvel Super Heroes range. Let’s take a closer look at Captain Marvel and The Skrull Attack set. 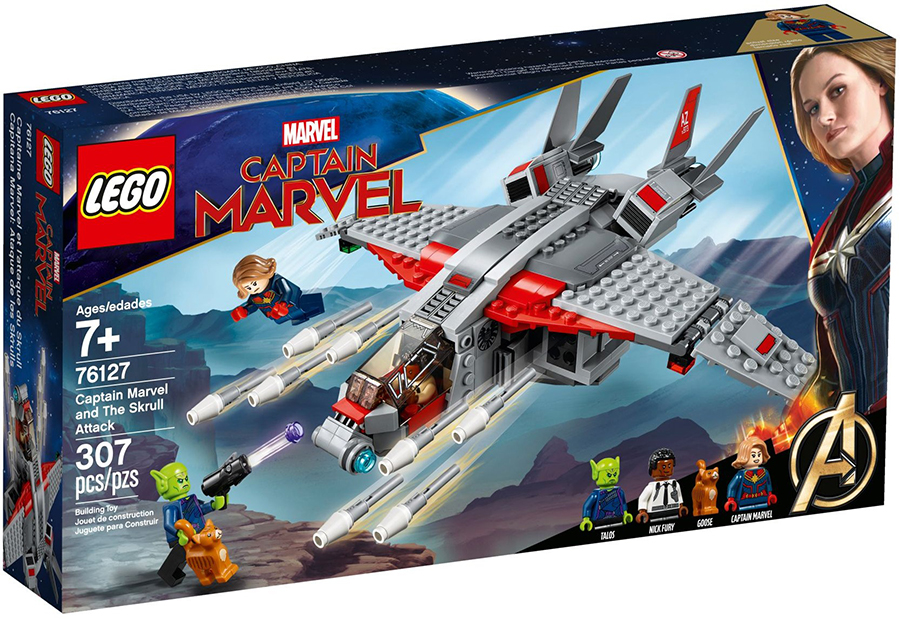 Team up with Captain Marvel and Nick Fury to save Goose the cat from Talos in LEGO® Marvel 76127 Captain Marvel and The Skrull Attack. This action-packed construction toy features Nick Fury’s Quinjet with an opening dual minifigure cockpit, adjustable wings, 2 flick-missile shooters that each shoot 4 missiles at once, and an opening rear compartment with space for Goose. This popular toy building set for kids includes 3 minifigures with weapons to recreate exciting scenes from the Captain Marvel movie and for endless imaginative play.

Before I get to the build, let’s have a quick look at the packaging. You’ll notice the 2019 Super Heroes sets look a little different than past Super Heroes sets. Instead of being branded Marvel Super Heroes, sets are now branded under the superhero they are based upon. So this set is technically not a LEGO Marvel Super Heroes set but a LEGO Captain Marvel one. While this does offer up a fresh take on the box design, which is more tied to the movies, I’m not sure what it means for Marvel sets not based on the Marvel Cinematic Universe. Hopefully it doesn’t mean an end to the random Super Heroes sets featuring some less well known characters. One of the most overly produced non-Star Wars ships in LEGO is the Quinjet. The Avengers vehicle of choice, has appeared in three other sets as well as a number of microscale minibuilds. The Quinjet featured in this set is billed as being Nick Fury’s, with the limited information we know about the Captain Marvel, being set in the 90’s, it features a young Nick Fury who even back in 1995 was tracking enhanced beings. The vehicle is similar to the one featured in set 6869, which just so happens to be one of the earliest sets to be based on an MCU movie. All the familiar traits of a Quinjet are present, with the tipped wings, dropped cockpit and two rear engines all there. Both wings feature a rather unique weapons system. In recent years, the stud-shooter has been favoured in a large number of sets. Here two sets of four shaft rods, are loaded into to a couple of 1×2 bricks with holes under each wing. These missiles can be ‘fired’ by pushing a mailbox element, mounted on a flat tile runner. It’s a unique method of firing something, but it works and results in a better visual finish to the wings. There are a number of stickers used to create a little additional detail on a few parts of the Quinjet. I love the old-style SHIELD logo, either side of the cockpit. I’m less of a fan of the clear stickers on the windscreen section. These are a magnet for fingerprints, which are very visible once stuck on. You can use the brick separator to overcome this but the surface of the windscreen is a tricky shape to place the stickers on, so it’s not easy getting them in place in this way. 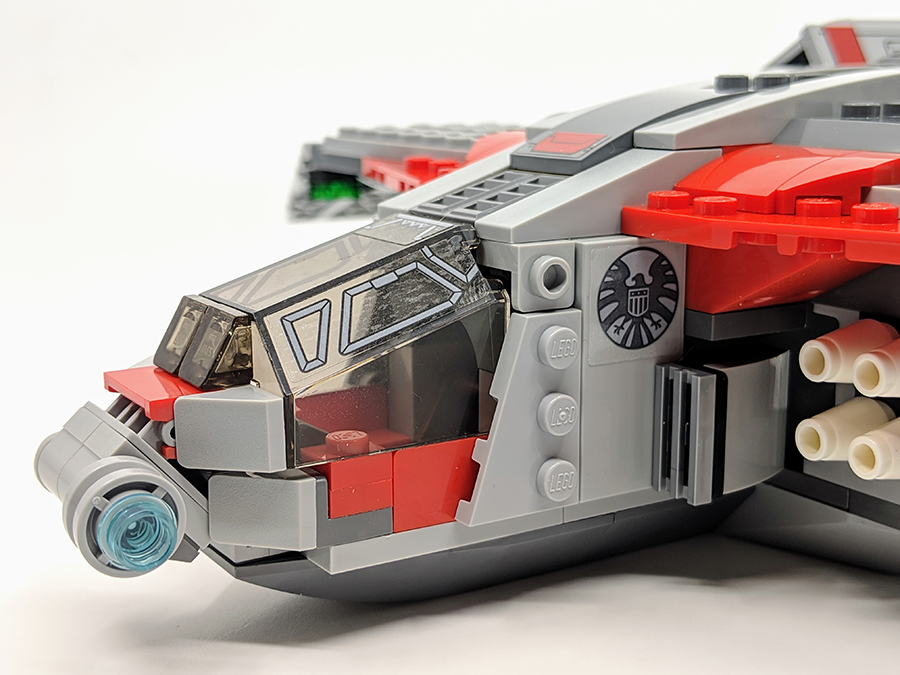 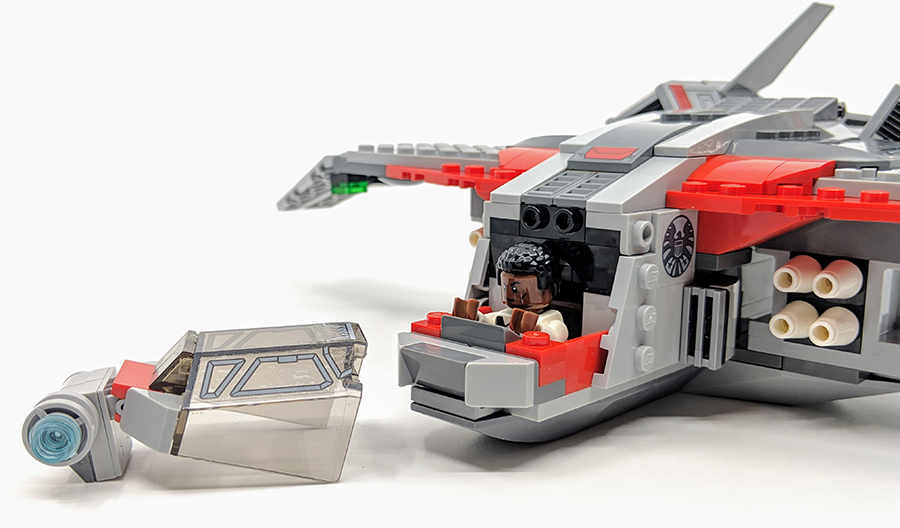 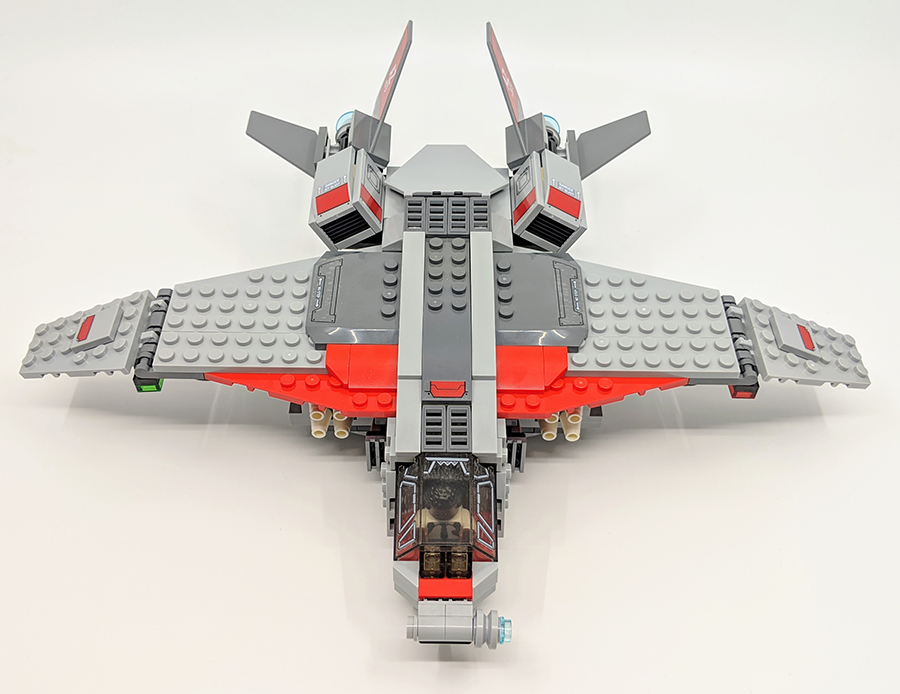 There is one section of the Quinjet, which I’m not a fan of and it’s the section at the rear of the craft. As you can see there are a couple of ‘Roof Tile 1X2 Inv.’ elements stacked on top of each other and above this is the tail section of the jet. I had to double check I hadn’t missed some bricks or place something in the wrong place. I feels like there should be a couple of 1×1 bricks between in the gap between the main body of the Quinjet and the tail. It wouldn’t interfere with the section for Goose to be placed in and would make the tail section a little more stable. Even as writing this, I’m sure I’m made a mistake. The set includes four characters – Captain Marvel, Nick Fury, Talos and Goose the cat. Both Captain Marvel and Nick Fury have appeared in other sets, which I’ll go into more details below. But Talos, is the first time we’ve seen a Skrull in Minifigure form. 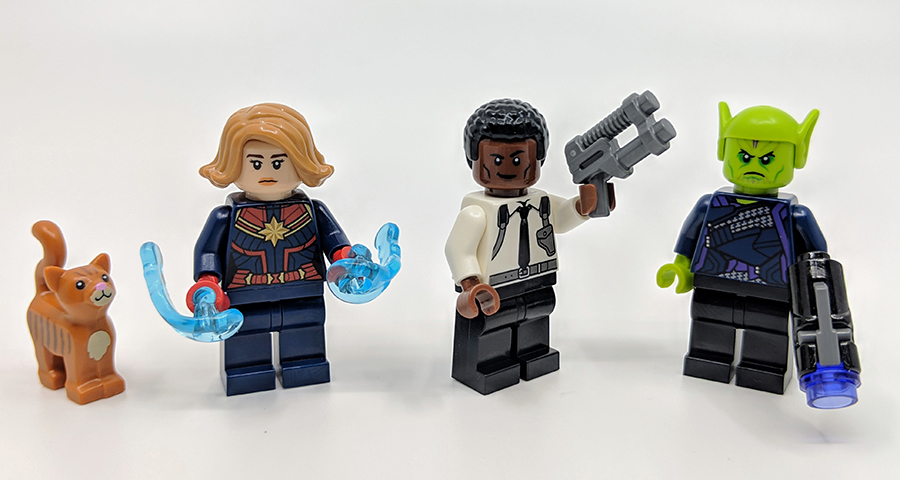 Being set in the 90s, Nick Fury look a little different to what we are used to. Not only does he have hair, it also has two eyes. In Minifigure form, this does make him look a little generic but from what we’ve seen of Nick from the trailers, it’s a decent likeness of the youngful SHIELD agent. As mentioned above Talos, is the first Skrull to be featured in a LEGO set and from what we are lead to believe, this race of shapeshifting aliens could play a huge part in the future of the MCU. Talos is a Skrull commander and leads the attack on Earth, which Nick and Carol Danvers get caught up in. The minifigure uses a new ‘hair’ element to capture the Skrulls unique look, and from what we’ve seen of Talos in production images, it’s a great recreation. Although I’d have like to have seen his long coat created with a material waist wrap. Just like Nick Fury, Carol Danvers aka Captain Marvel has made an appearance in Minifigure form before, but this version is based on her MCU appearance. She has two expression, this slightly happy one and the other being well rather nonplussed. I think a more fierce expression was needed for someone battling an evil alien warrior. I’m also unsure about the hair, it’s the wrong colour and style in my opinion. Although the style is a little tricky to place with elements currently available, it would of looked much better in blond as opposed to medium nougat. Captain Marvel has two trans blue power blast shooters, which clip into the hands and she is joined by her faithful feline friend Goose. This is just a standard cat element, with no defining features making it exclusive to this particular set. 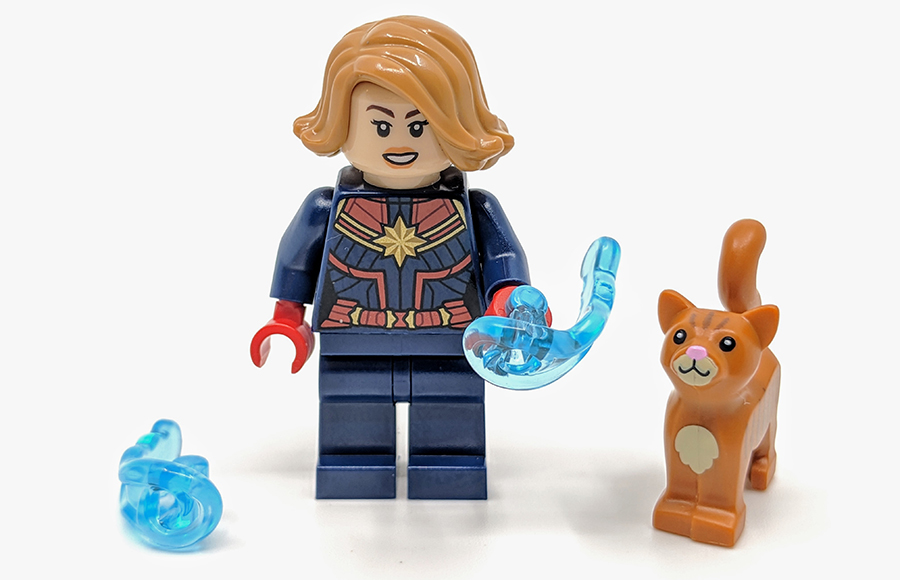 Both Captain Marvel and Nick Fury have appeared in past LEGO sets. Captain Marvel has made her only other appearance in the 2016 set 76049: Avenjet Space Mission. With Nick Fury bing found in set 76004: Spider-Man: Spider-Cycle Chase, along with the huge SHIELD Helicarrier set. Both past versions of the characters are based on their comic book versions, but you can see some similarities. Although the younger Nick Fury is more generic compare to his older self. Captain Marvel is a vast improvement in terms of print detail on the torso.

I’ve built all the other minifigure-scale Quinjets and although this isn’t my favourite version of the craft, I do like how it look more like the very first LEGO Quinjet, making it feel a little more old-school and in keeping with the era the movie is set within the MCU. From the brief appearance of the Quinjet in the trailers, it looks like a faithful recreation, especially in terms of colours. The minifigures are a decent selection, although it would of been nice to see Captain Marvel in her Starforce outfit, as we’ll most likely be getting the version included here in one of the Avengers Endgame sets. It’s always difficult to compare sets based on a movie, when not being able to see the movie. But from the the little we have seen, each of the elements seem on the mark, how they combine together won’t be known until the film opens on March 8th.