Ever since the Harry Potter theme returned a couple of years ago, it’s become a rather popular range for LEGO®. There’s been massive Hogwarts Castle, a collectible Minifigure series and even an advent calendar. This Summer, the range expands with six new playsets. One of which is a little different than any LEGO Harry Potter set so far. Set 75979 is a displayable LEGO version of Hedwig, Harry’s loyal owl chum. In the wizarding world of Harry Potter, owls are used to deliver post to potential Hogwart students. But this isn’t just a brick-built snowy owl, it holds a rather impressive secret. So let’s take a closer look. 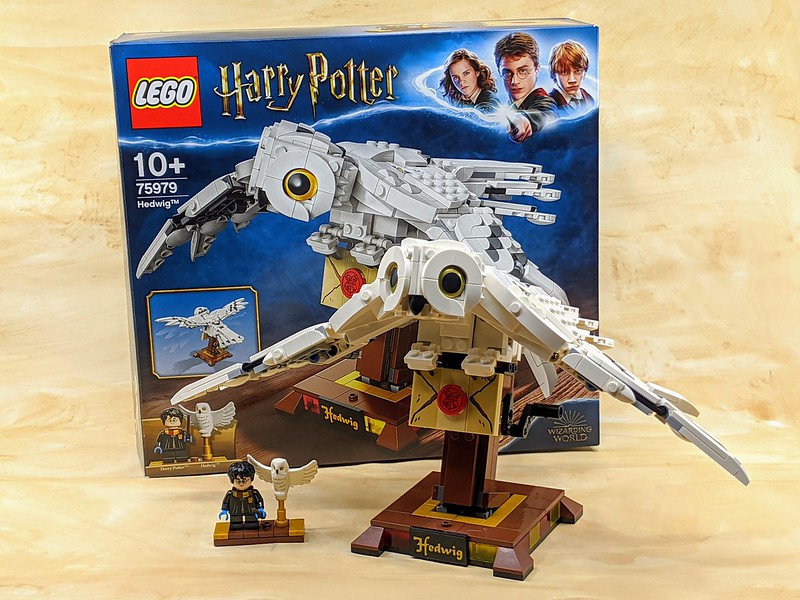 Buildable Hedwig the owl with ‘flying’ wings
With a wingspan of over 13” (34cm), this 630-piece brick-build model shows Hedwig in flight, delivering an important letter. Once the build is complete, a turn of a handle causes the jointed wings to move gracefully up and down. The collectible model stands on a sturdy base with a detachable LEGO Harry Potter minifigure and another, smaller, Hedwig the owl toy with wings spread open. 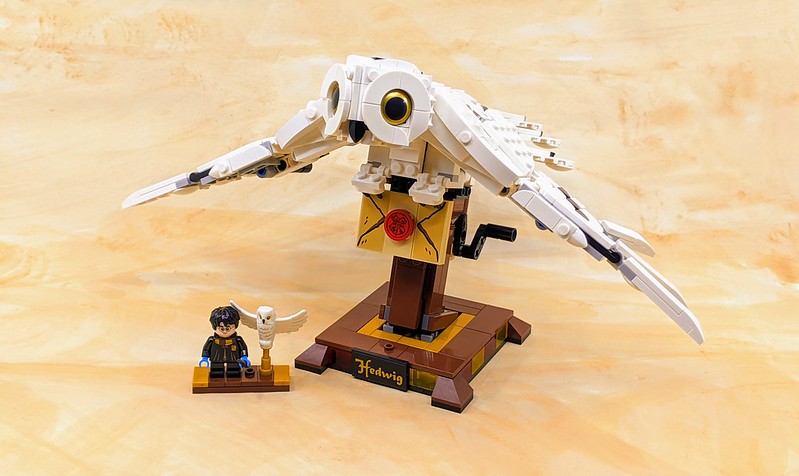 Despite my love for things like Star Wars, Lord of the Rings and Jurassic Park, I’ve never got into the wizarding world of Harry Potter. I’ve watched a couple of films, played the two LEGO games, and built a couple of LEGO sets. Apart from that, I’ve not really ventured heavily into this content-rich world. That’s not to say I don’t recognise the pop culture it has become. There are many iconic moments and characters in Potter films and books, many of which have already become great LEGO sets. When the new Summer range was revealed, one set instantly drew my attention. I love LEGO sets which offer something a little different, so a buildable, displayable owl certainly checked the right boxes. But it offers far more than just a cool looking display piece, it’s also a kinetic model. 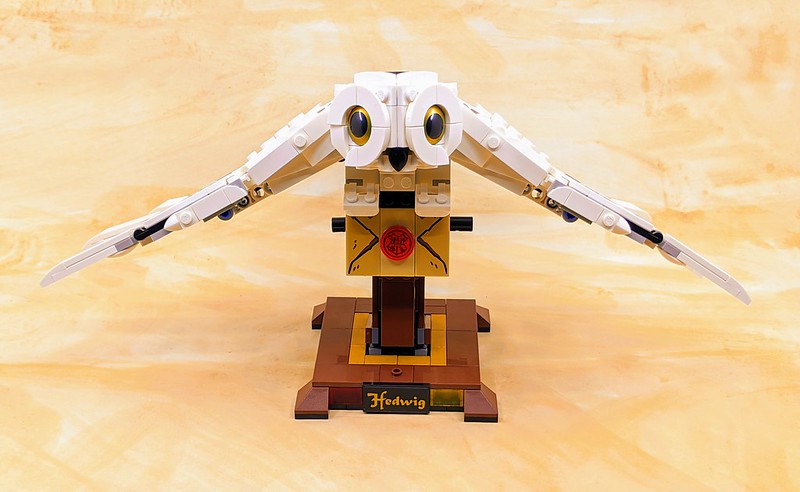 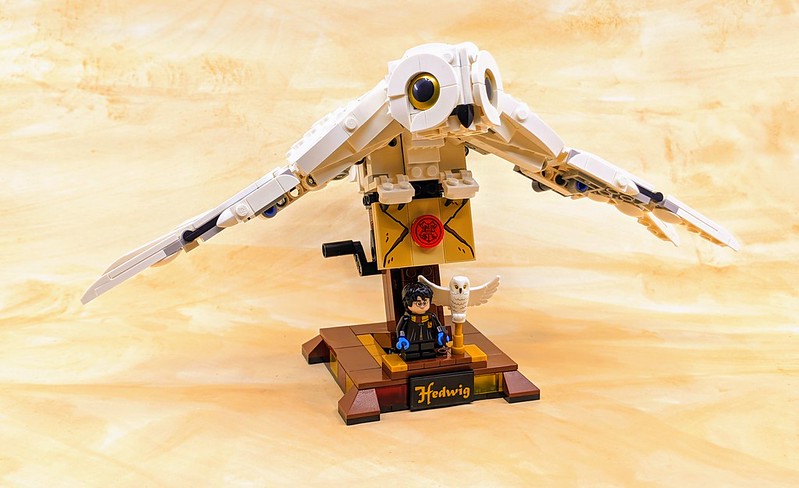 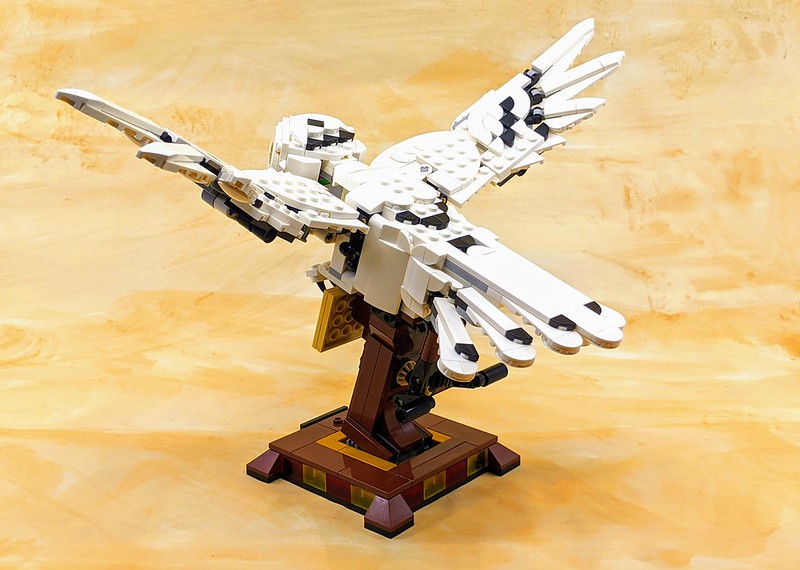 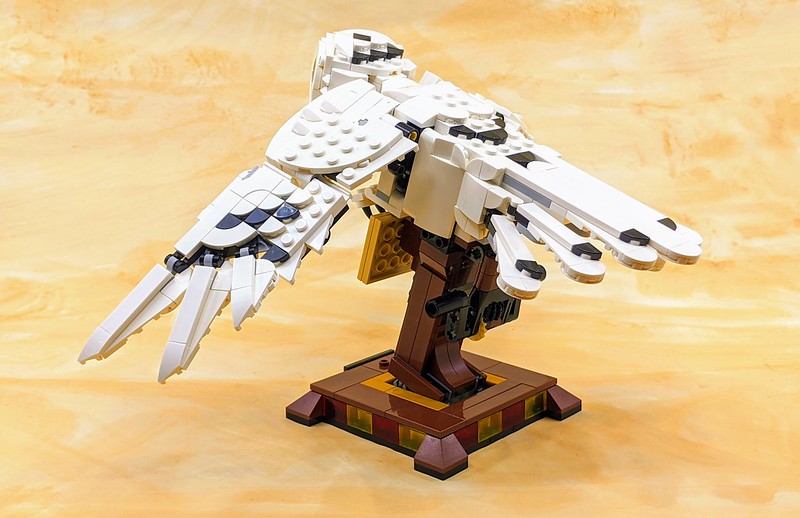 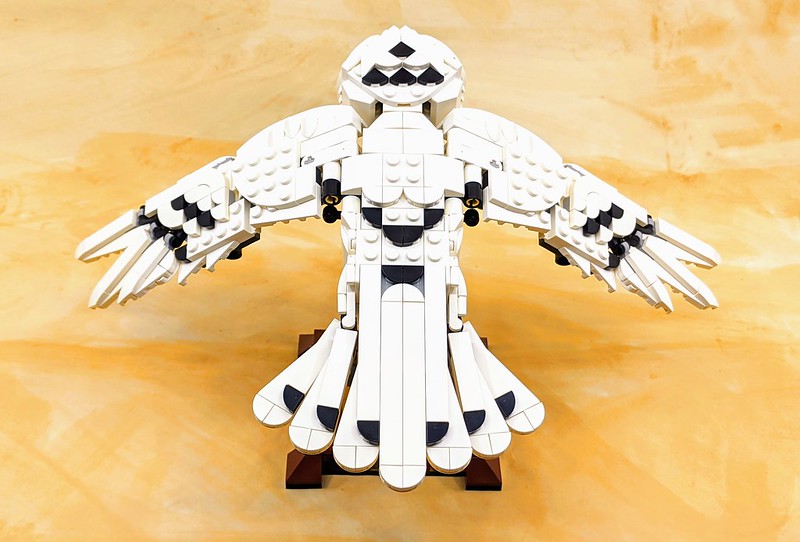 A simple mechanism allows Hedwig to flap her wings when a handle is turned on the ornate display plinth. Even this is quite cool, with a series of transparent red and yellow bricks dotted around the base. I think these work way better than standard red and yellow bricks would. So that is an impressively effective choice by the designer. The section on which Hedwig is connected to is slightly angled. This partly helps to conceal the moving parts but also gives Hedwig a nice swooping pose. You’ll notice there is a 2×4 plate featuring Hedwig’s name and a 4×6 envelope. Unfortunately, these are achieved by stickers, the nameplate isn’t bad, but the colour difference on the envelope is a little noticeable. 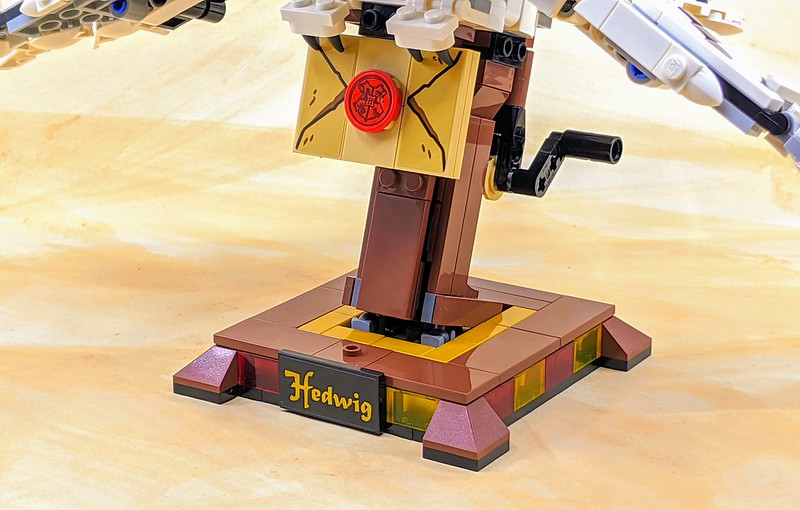 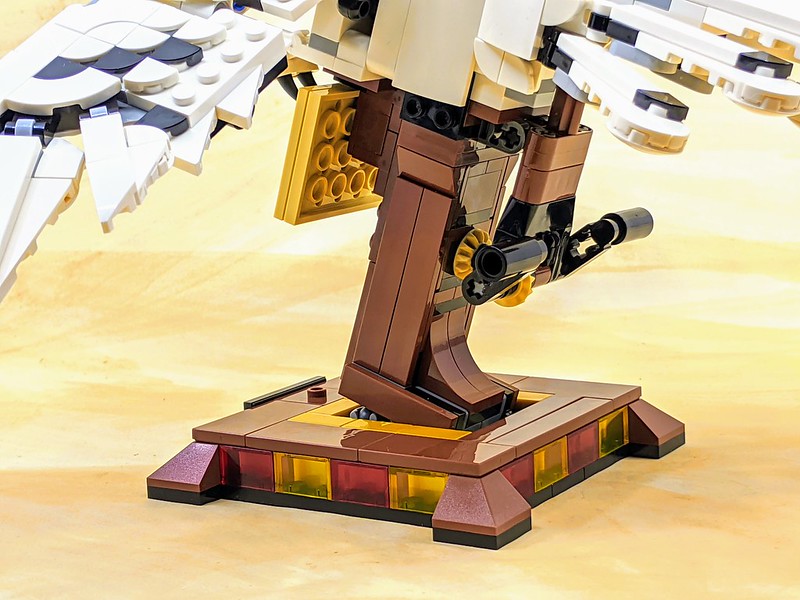 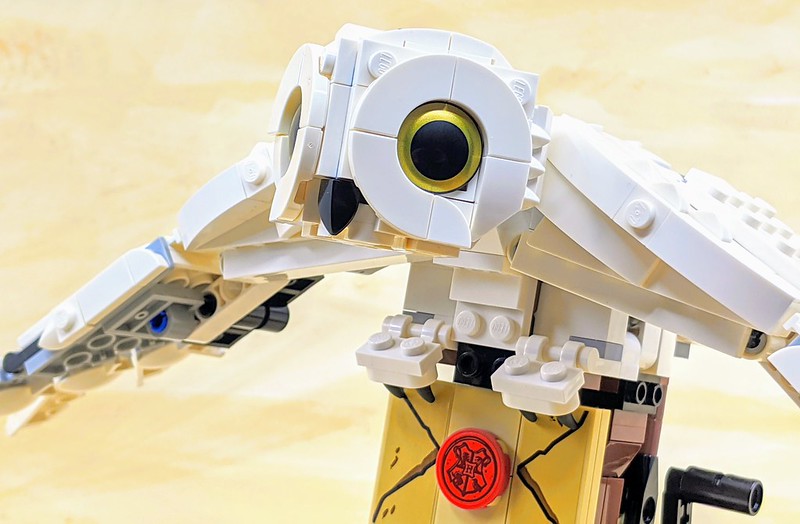 The whole build is amazing fun and the way the feathers are achieved by layering plates and smaller elements is very effective. But the star of the set is the movement. Turning the handles makes both wings kick into life and it’s not just a simple up and down movement either. The wings are jointed at both the body and in the middle of them. which gives the movement a satisfying sweeping motion. The best way to show this off is by seeing it in action.

The focus of the set is clearly Hedwig, but there are also a couple of Minifigures included. You get a younger version of Harry Potter. So he has the classic short legs and bushy hair, to represent the character from the early years of Hogwarts. He’s also wearing blue gloves and is donned in his Hogwarts uniform and Gryffindor scarf. This version of Potter is exclusive to this set. Harry is joined by a mini version of Hedwig, who is shown with her wings spread. These can be displayed on the plinth of the set thanks to a smaller detachable plate. 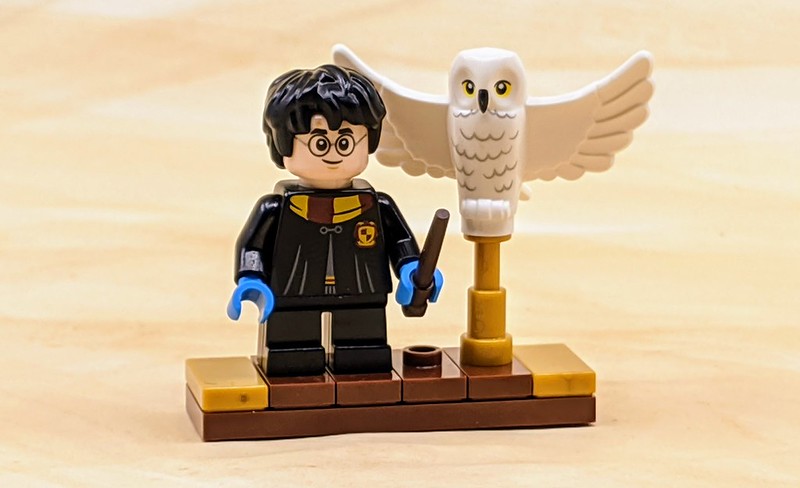 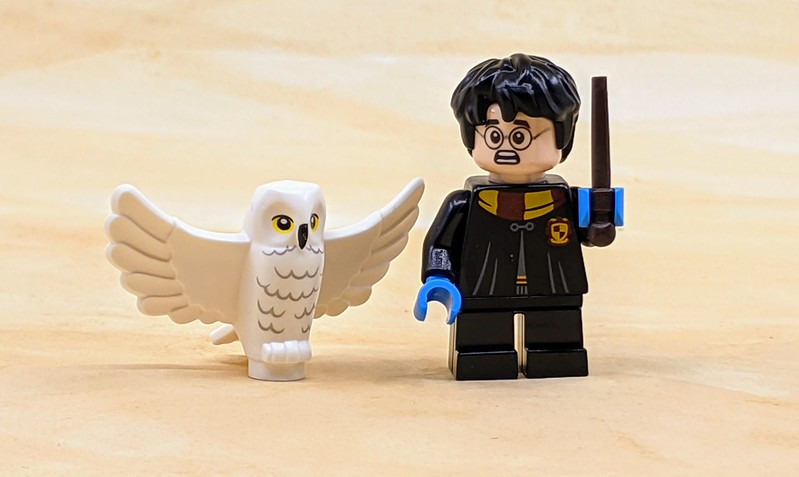 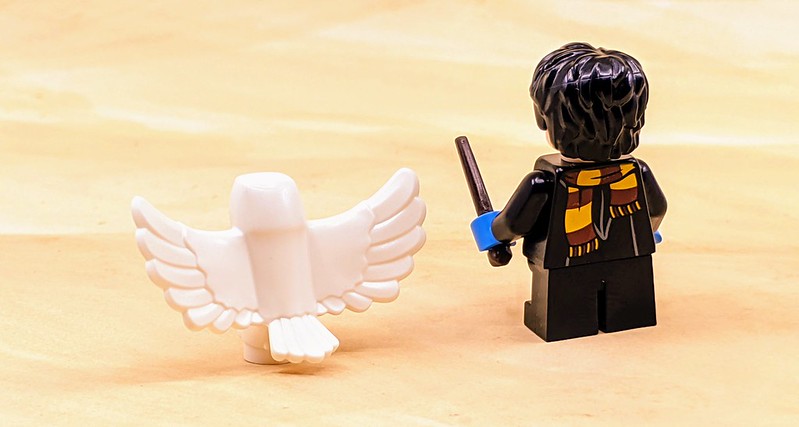 I might not be the biggest Potter fan but this set is amazing. It’s a great visual display piece, which is heightened by the motion elements. The way the wings move is great and works very well. They could have simply created a brick-built version of Hedwig, sitting in a perch position, similar to the version offered at a Barnes & Noble event a couple of years ago. But I really like the open winged look, even more so with the movement it offers. I’m also impressed by how ornate the plinth looks, as a simple thing like using transparent elements adds to the appearance. The use of stickers is a little disappointing, this seems to be an increasing issue with sets, where elements which could easily be printed are stickered instead. I would have loved a bigger UCS-style version, but as it is, the set is near perfect. Just the right size, a great display piece, moving elements and a joy to build.