Twenty Five years ago a movie stomped into cinemas which changed film making forever. Jurassic Park is one of Spielberg’s finest big screen adventures and kickstarted a new generations love of dinosaurs. It’s also one of our most loved here at BricksFanz HQ. But despite the movies huge fan base, there has yet to be any sets specifically based on the original trilogy. We got a few sets released as part of the LEGO® Studios line and in 2015 the Jurassic World theme was launched alongside the new trilogy of movies. But still no sets directly based on Jurassic Park, thankfully LEGO, uh found a way. Now as part of the new range based on Jurassic World sequel, Fallen Kingdom, we finally have a Jurassic Park set and it’s quite amazing. We weren’t going to review it but after building it, we just had to take a closer look at set 75932: Jurassic Park Velociraptor Chase. Recreate a classic scene from the original Jurassic Park movie with this fun LEGO® set that celebrates the 25th anniversary of the original blockbuster movie. Open the kitchen cabinet to hide Lex and Tim Murphy from the prowling Velociraptor, use the locking door function to keep the dinosaur out of the computer control room, then push it through the breakable window to continue the chase. This dinosaur set includes 4 minifigures and a Velociraptor figure.

Despite being a smallest set, so much detail has been packed into it. With three iconic areas from Jurassic Park, represented in a single area – the control room, the embryo cold storage area and the kitchens. With the main focus being the control room. There are plenty of great little nods to the film such as a Isla Nublar map on the wall, the power indicator light and best of all, Dennis Nedry’s computers, complete with amazing ‘uh, uh, uh!’ screen on one of the monitors. Amazingly there are even a couple of cheeky play features thrown in for good measure. 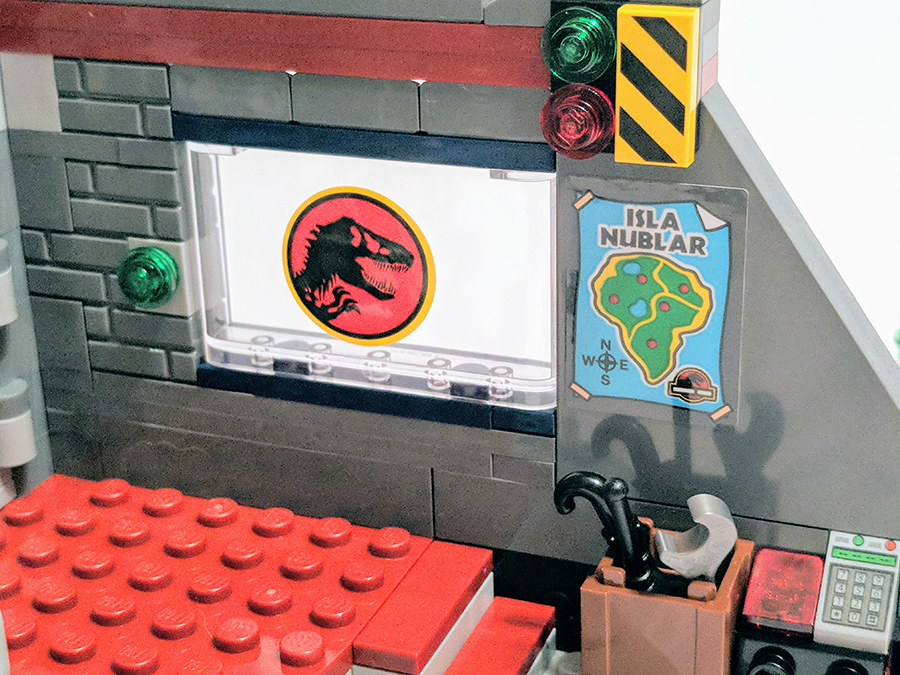 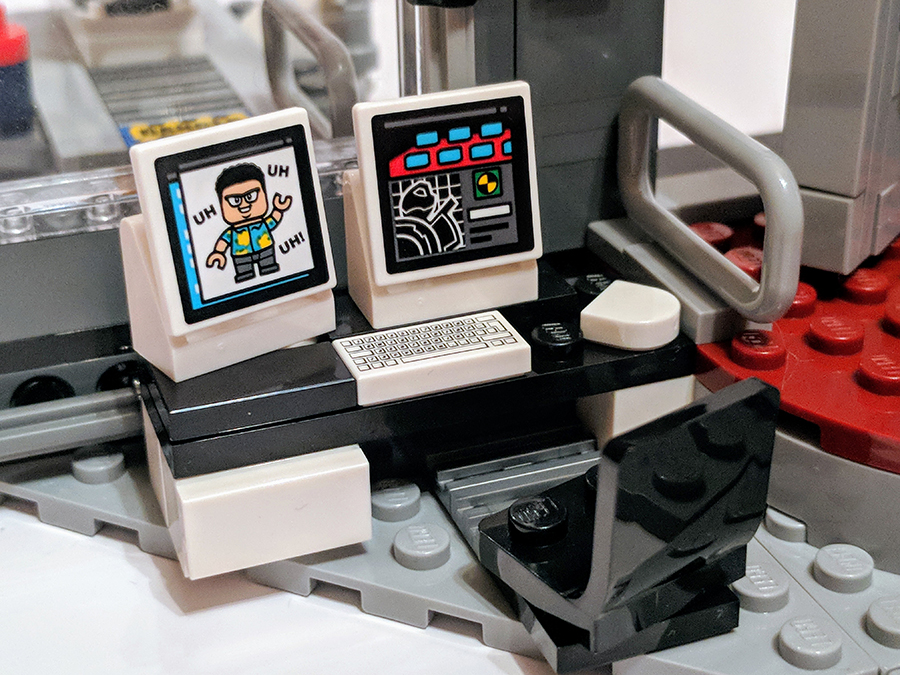 The window, with the Jurassic Park logo on it, can be popped out and the door has a working bolt system. For once those Technic elements are not only useful, they look the part as well. Perfect if you need to keep a pesky Raptor at bay. It’s things like this, combined with the sticker detail and minifigures, which make this set so much fun. Not just to build but to display and play with. In fact it’s one of the few sets in the Jurassic World range, in which the dinosaur is completely outshined by the set. Connected to the control room section, is a small section of the kitchen. This is where Lex and Tim are being hunted by a pair of Raptors. It may not be a big part of the set, but it’s instantly recognised as the area from the film. As a nice nod to the another part of the film, there’s even a plate of green jelly on the counter. Finally the third section is the Dinosaur embryo cold storage area. This is a little more detailed compared to the kitchen and includes the embryo carousel and even the fake shaving cream can, Nedry used to smuggle out the dino DNA. Although both these sections may seem a little disconnected to the main part of the set, I love that they have been included. 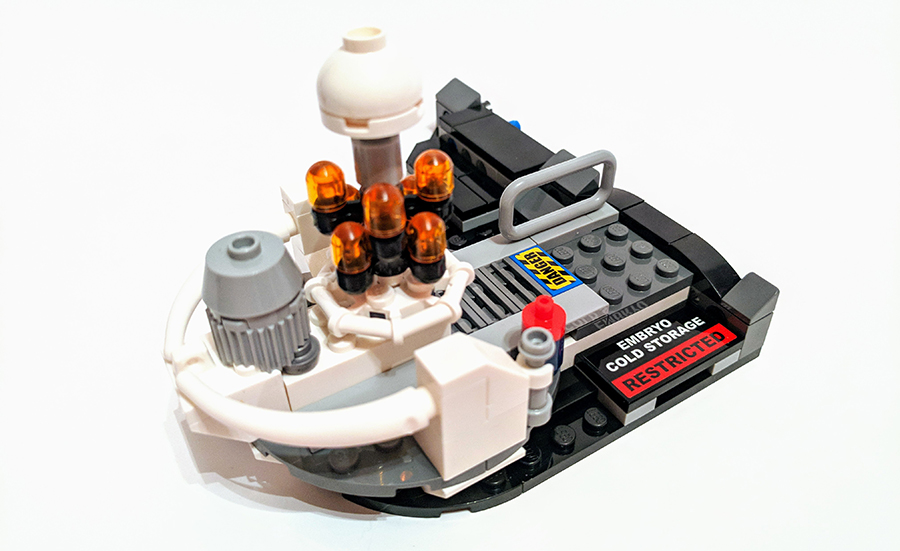 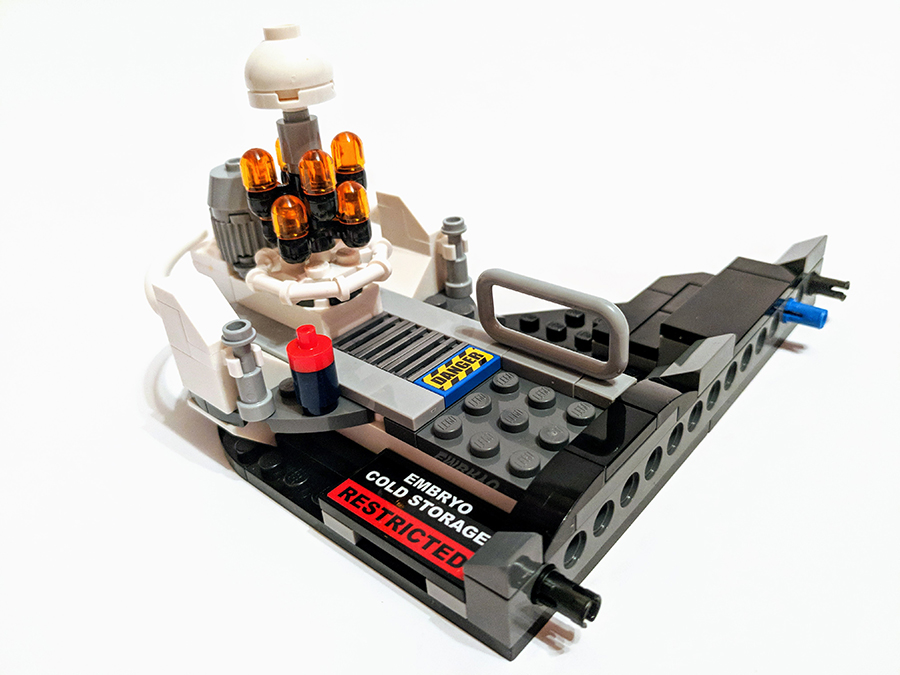 There are plenty of iconic moments in Jurassic Park, so finding a way to celebrate the film in a single set wouldn’t of been easy. But I think what has been chosen, is a great choice. Not only does it include the most of the main characters, there’s plenty of great easter eggs from other moments in the film and great little play features. The set includes four minifigures of the main cast of Jurassic Park. So you get Dr Alan Grant and Dr Ellie Sattler along with John Hammond’s grandkids Lex Murphy and Tim Murphy. Print detail on each character is perfect, although I’ve have preferred Ellie to have a different ponytail style hair piece. Lex also doesn’t look right has a short legged minifigure. Sure she’s a kid but she’s older than Tim and quite tall in the movie. Both cases can easily be solved by swapping out the parts. All minifigures, apart from Dr Grant, have alternate faces. As well as the humans you also get a Raptor figure. All of the LEGO dinosaurs the Raptor is second only to the T. rex. The look of the beast has been expertly captured in LEGO form without being overly scary. Although Raptor’s have appeared in past LEGo Jurassic World sets, the colour and design of the one included here, is unique to this set. It would of been nice to have two Raptors, like in the movie, but that will have pushed the price of the set up. Jurassic Park is one of my favourite films, so to finally have a set based on it, is awesome. Cramming so much from the film in a single set is outstanding. The minifigures are great, the graphic design elements are great, the dinosaur is great. In fact it’s one of my favourite sets this year and the perfect way to mark the 25th anniversary of the film. Sure I’d of loved to have seen more minifigures or two Raptors, would of have swapped out the DNA carousel for a shirt-less Ian Malcolm minifigure? Totally! But I still adore this set and I have all my fingers and toes crossed that it will lead to more Jurassic Park sets. Oh the possibilities.