The Mandalorian has sparked a newfound love of a galaxy far, far away. With its mysterious main character, numerous connections to past Star Wars adventures and plenty of epic space battles, the first live-action Star Wars is pretty damn good. As the second episode of the second season now streaming, it’s time to take a look at another set inspired by the Disney+ series. As great as The Mandalorian is, a certain small green alien child took the world by storm. The Child remained a secret until the first episode of the show aired, making his introduction even more impactful. Now you can bring The Child to life with a buildable LEGO® version of this mysterious infant. 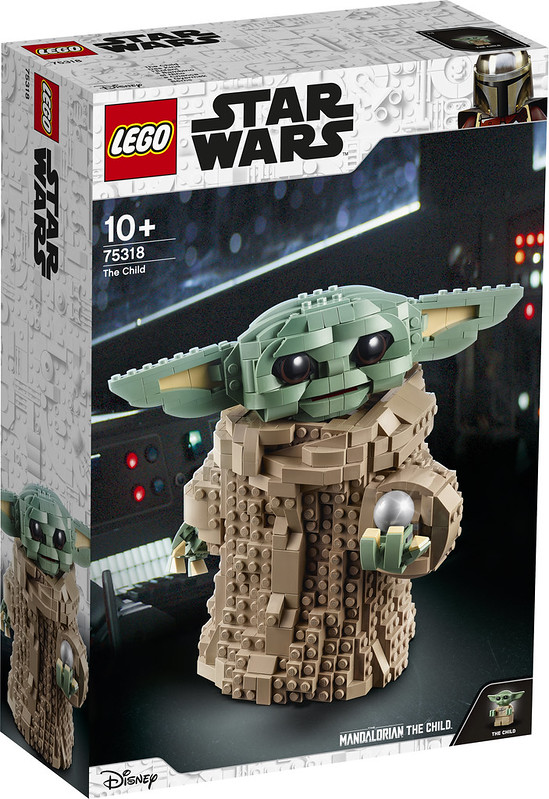 Turn the cuteness factor up to the max with this LEGO® Star Wars™ The Child (75318) build-and-display model. Authentic details of this popular character, affectionately known as ‘Baby Yoda’, are recreated in LEGO style, with posable head, ears and mouth for different expressions, plus the Child’s favourite toy – a gearshift knob (element included) – for it to hold just like it does in Star Wars: The Mandalorian.

Totally charming
A super gift idea for kids aged 10+ and any Star Wars fan, it includes clear building instructions so even LEGO beginners can enjoy the fun, creative process. This buildable model also comes with an information sign and the Child LEGO minifigure to complete a charming display. 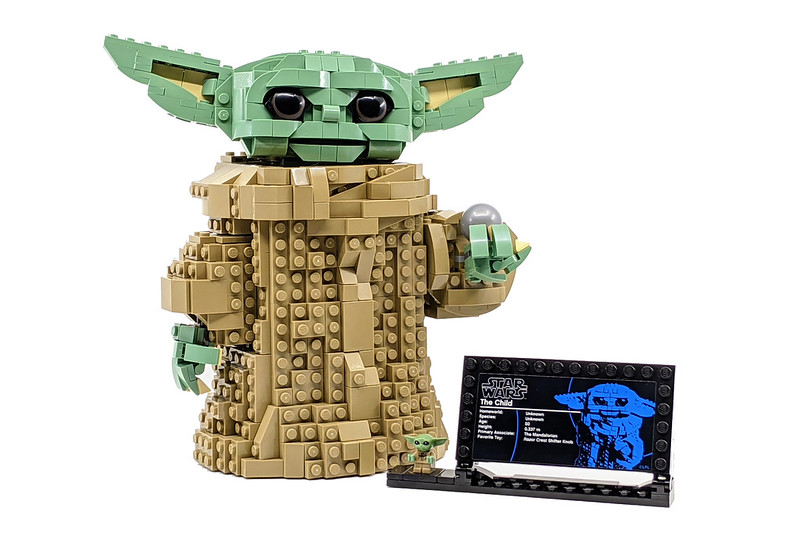 Brick-built LEGO Star Wars characters are nothing new, many years ago various characters were transformed into LEGO sets and it’s safe to say the results were a little underwhelming; which is why there have only been a few similar LEGO sets in recent years. Even some of the more recent character builds have been met with mixed reactions. But then came The Child. Annoyingly dubbed ‘Baby Yoda’ The Child is a 50-year-old force-sensitive infant, who appears to be the same species as Master Yoda and fellow Jedi Council member Yaddle. Even 40 years on since we first met Master Yoda, little is known about his species. Something which is still the case with The Child. 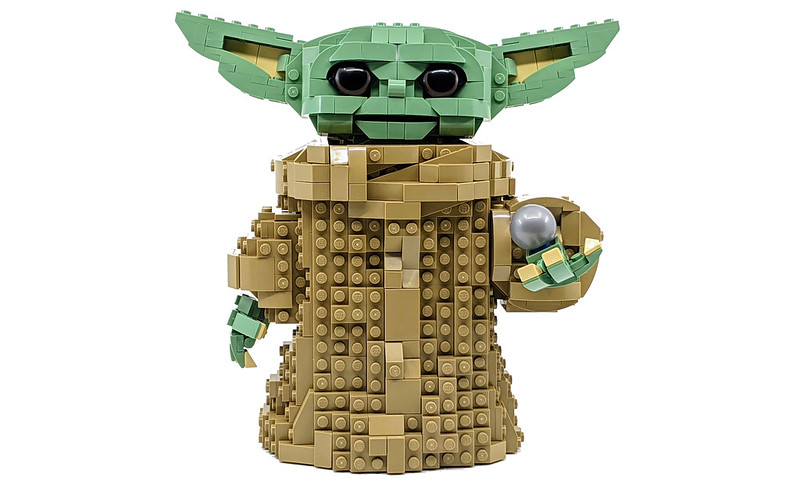 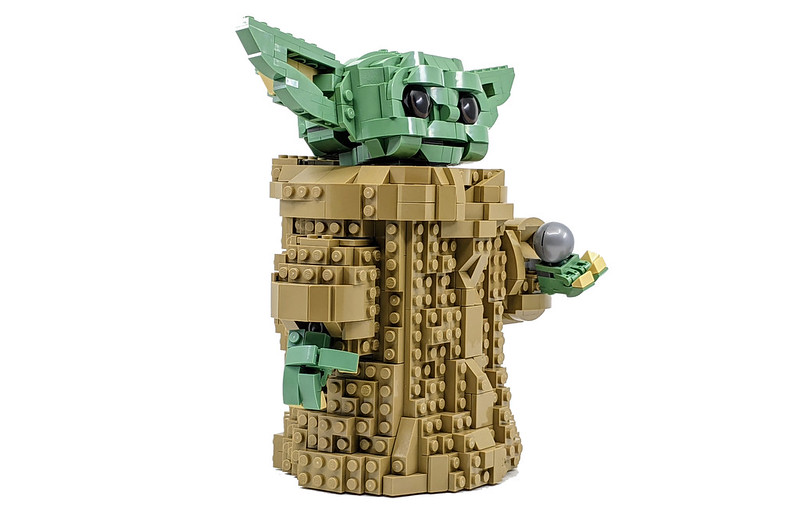 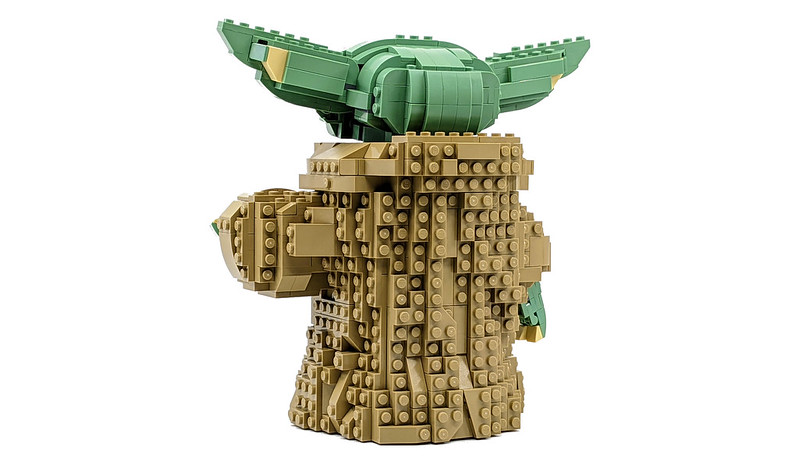 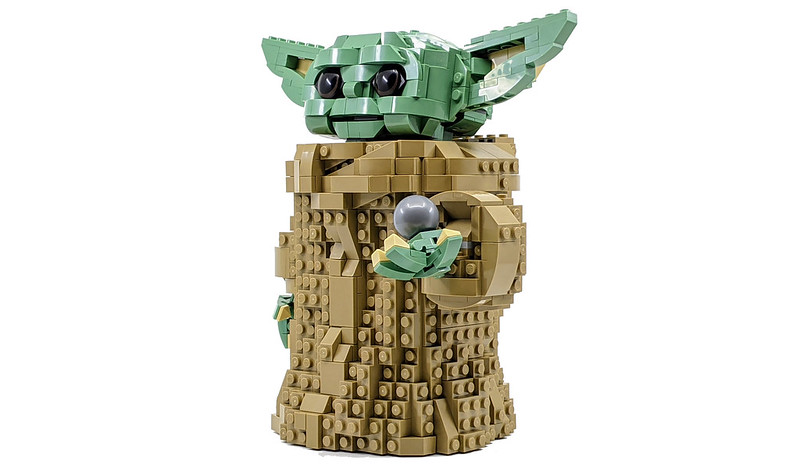 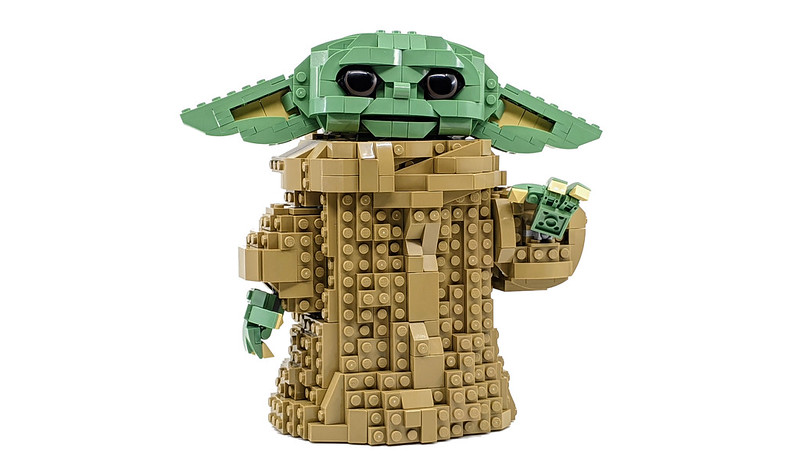 The LEGO version is delightfully cute, which isn’t easy to pull off with the blocky nature of LEGO elements. However, cuteness is far from the case as you begin the build. You start by constructing an inner cage-like structure, which has a seemingly ill-fitting ball cup element sitting near the top end of the inner structure. 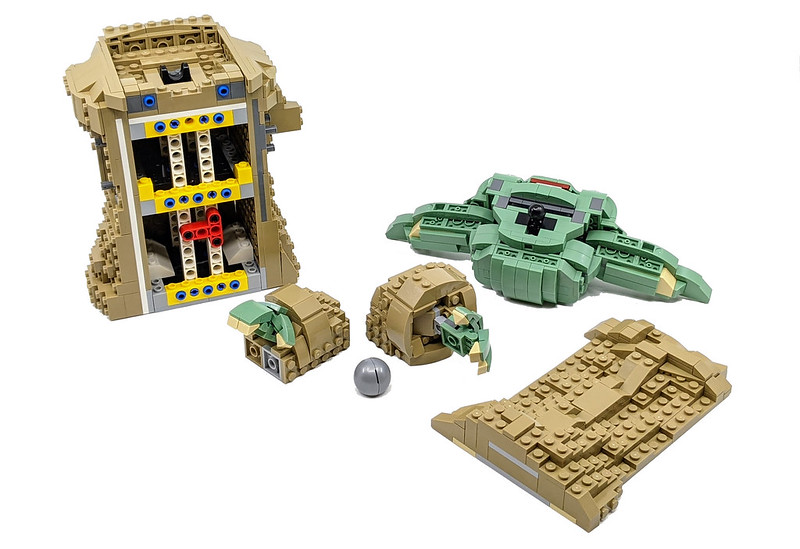 Once this inner section is complete, you are tasked with building four, highly textured panels mainly made up of brick yellow elements. These obvious represent The Childs simple robes and the way elements are layered, does an impressive job of creating a surface which looks a little bit like a material, well as much as LEGO bricks can. Each panel connects to the inner core, via a series of Technic pins, these do a great job of holding them on securely. 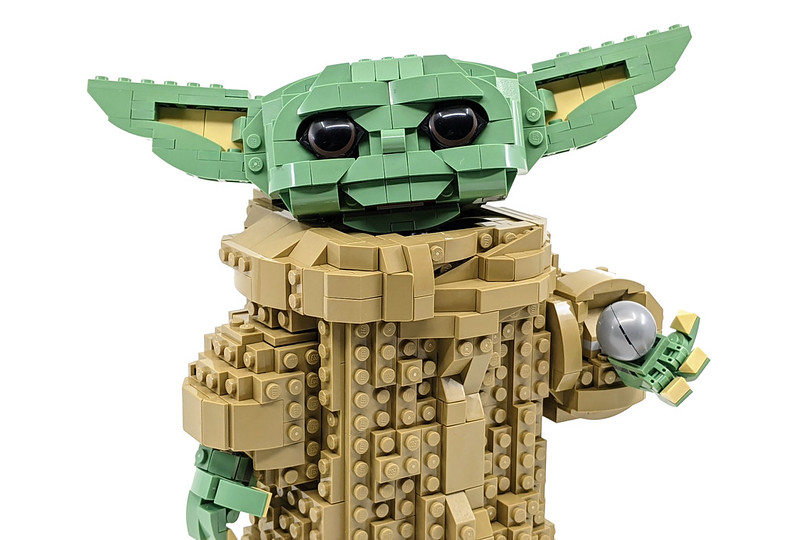 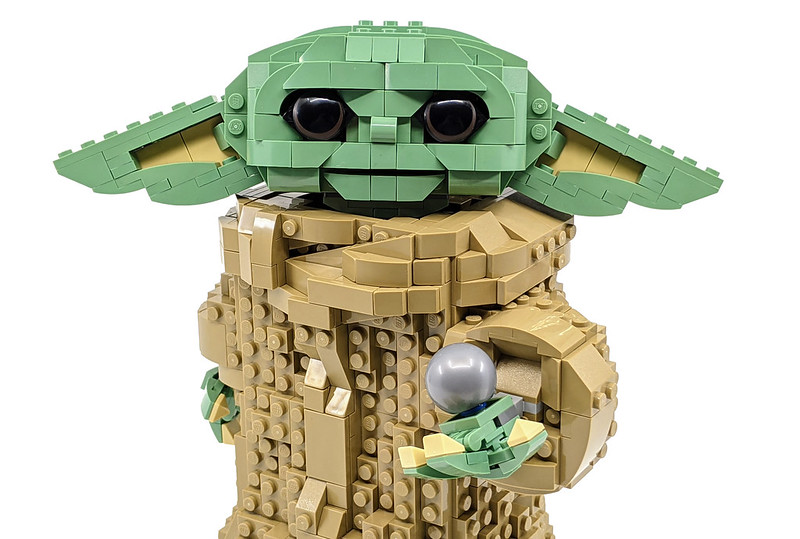 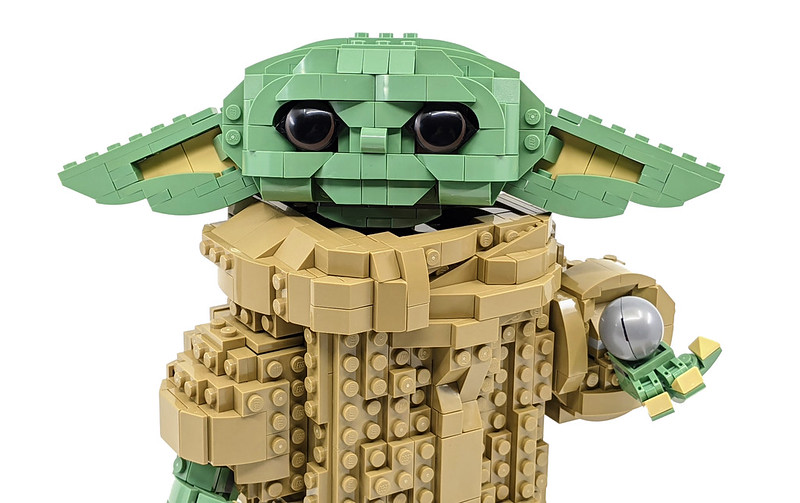 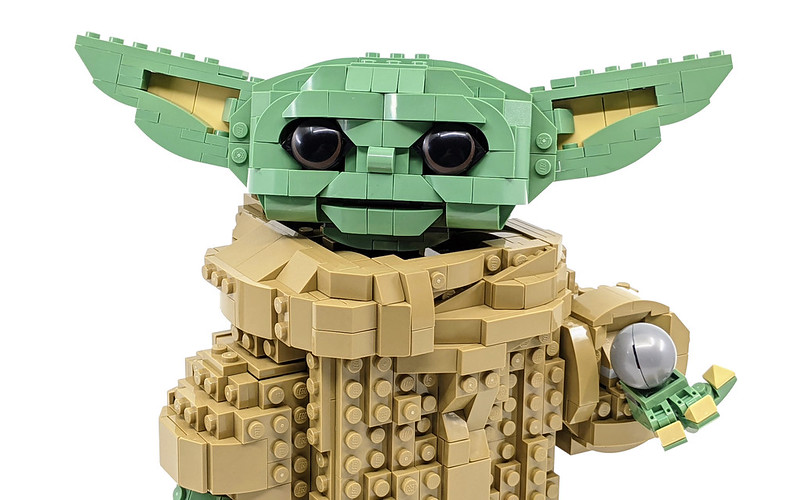 Once the panels are in place The Childs body is almost complete, with just a pair of arms and hands to build and connect. These are built independently from the body but are connected in a fixed position. They cannot be posed, although the hands have limited movement and one can ‘hold’ gearshift knob from the Razor Crest. 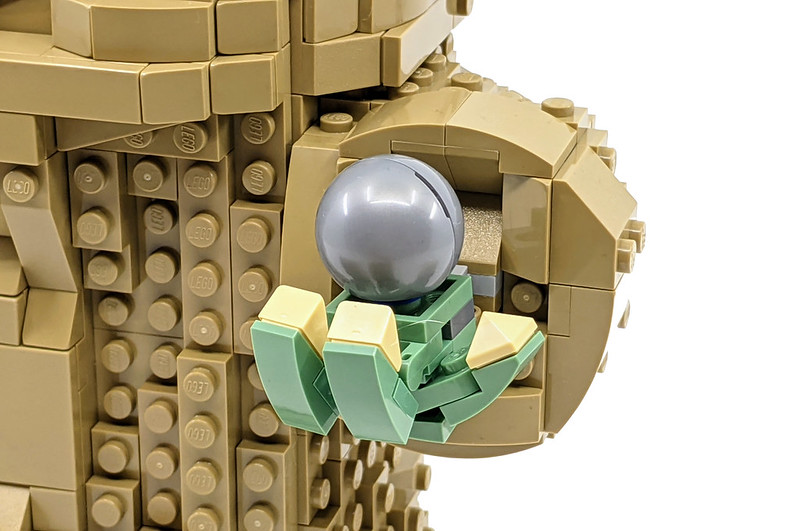 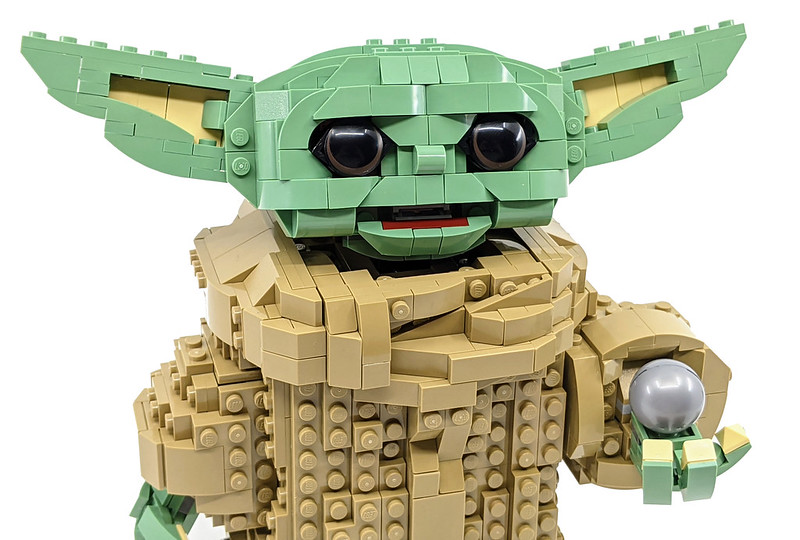 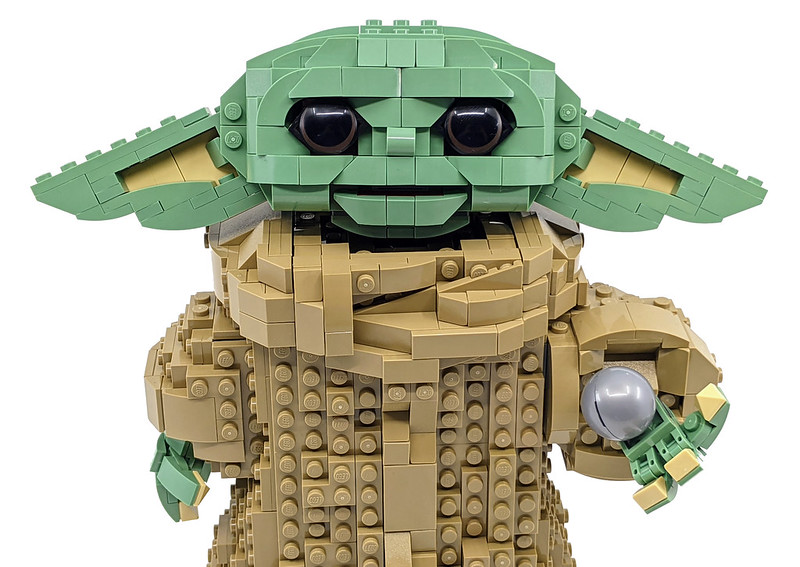 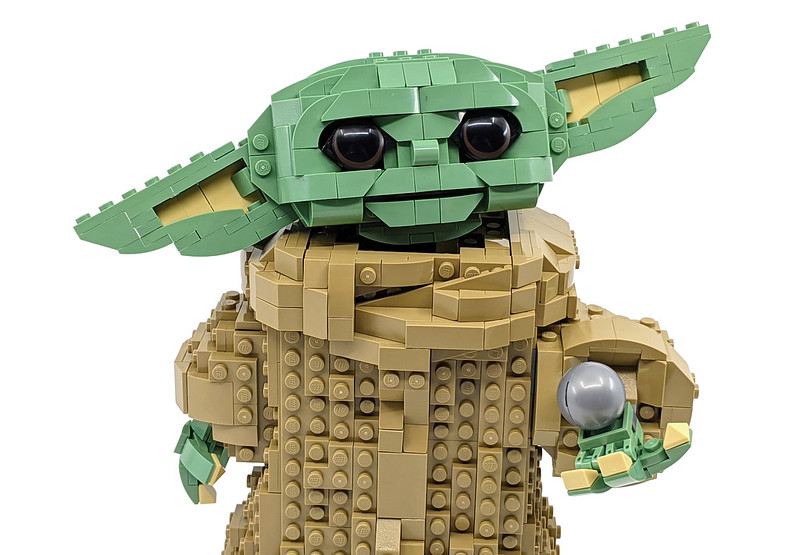 Finally, you get to add The Child’s surprisingly expressive head. Unlike the recent buildable Yoda set, the LEGO version of The Child looks almost as cute as the real thing. There is a dash of print detail on the elements used for the eyes, but it’s the way the light catches them which really turns up the cuteness. His ears can also be moved up and down, plus his mouth can be partly opened, these aspects of the head really help to inject a lot of character into the build. Once built the head is then connected to the ball cup and its looseness makes more sense as it allows you to head to be positioned in admittedly limited ways but enough to get a few expressive poses going on. Along with The Child, the set also includes a UCS-style display plate, features a few limited details about the mysterious character as well as a smaller figure of The Child. Making this set the cheapest way to get whole of one. 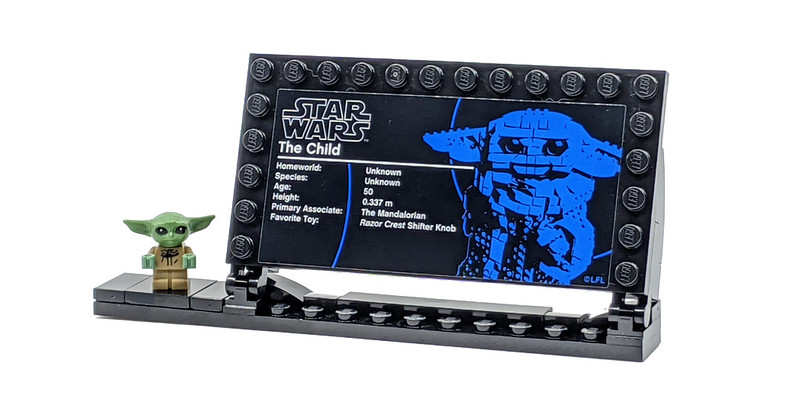 The Child is certainly a cute little fellow and that cuteness has translated into his brick-built form surprisingly well. The posable elements are limited but this kind of works in its favour. The build is quite fun, although the mass of the same coloured elements used on the robes can be a little tricky in places. Apart from that, it will keep you busy for a couple of hours and it’s the perfect set to sit down with and build as you watch episodes of The Mandalorian on Disney+. The end result is a cute little build to brighten up your LEGO collection.