With the release of Star Wars: The Last Jedi, one of the upcoming new LEGO® sets based on the film made a surprise appearance along the release of the film and ahead of the other new LEGO Star Wars sets.. Ahch-To Island Training is one of the smaller sets based on the film and recreates part of the hidden island Jedi Master Luke Skywalker retreats to when darkness engulfs the galaxy. After tracking down a lost piece of a map, the Resistance, led by Luke’s sister General Leia, send Rey to island in the hope that Luke will return to help bring down the First Order. The set includes Rey, Luke Skywalker and a Porg as well as part of the ruins of the old Jedi Temple, which once stood on Ahch-To. So here’s our review of set 75200: Ahch-To Island Training. 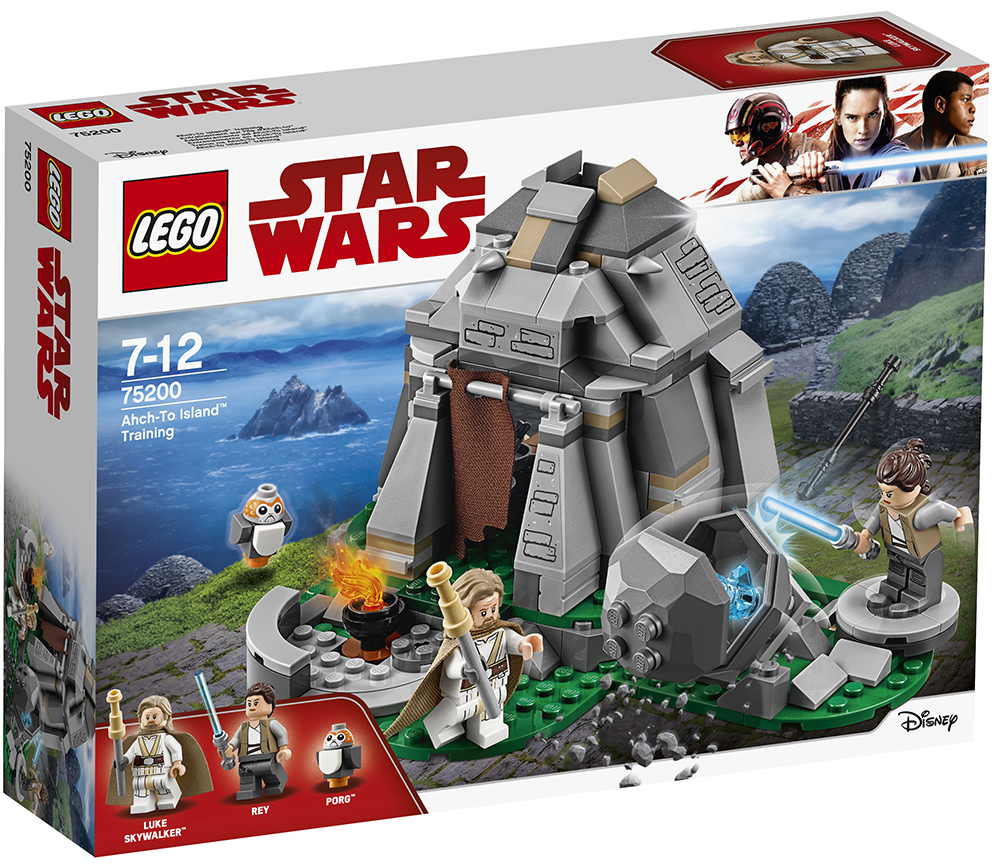 Join Master Luke as he trains Rey at his mountainside dwelling. This LEGO® Star Wars toy features a hut with detailed interior, removable roof section for easy play, small bonfire build and rotating training function with an opening boulder with knockaway feature. With 2 minifigures and a Porg figure, this LEGO brick version of Luke’s dwelling from Star Wars: The Last Jedi will immerse any Star Wars fan in a galaxy of Jedi adventures. 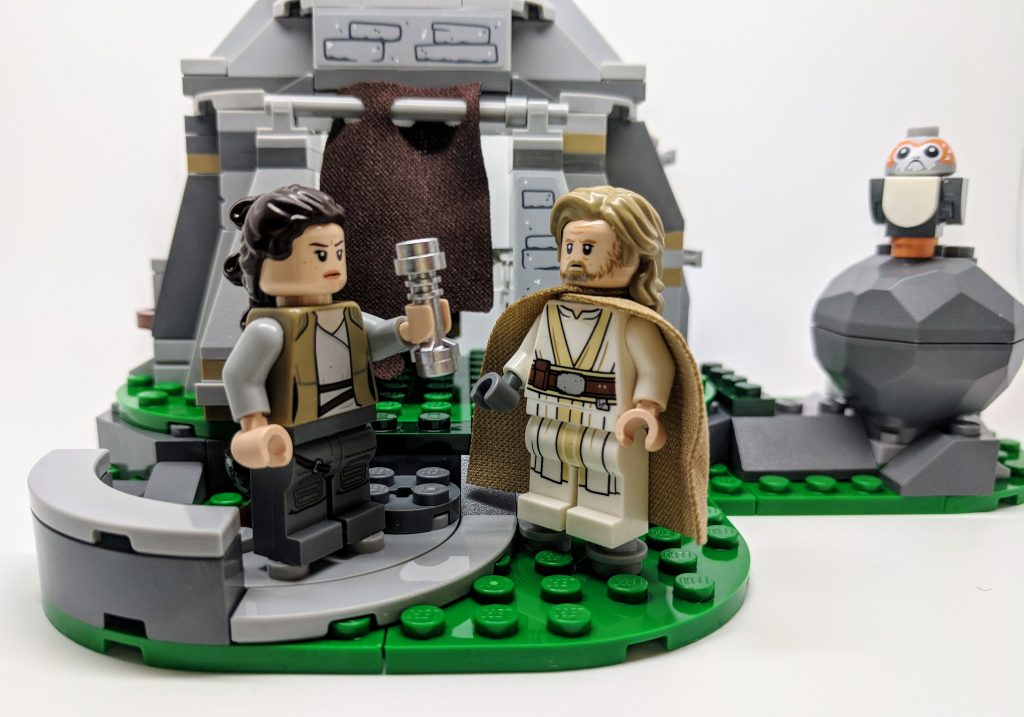 There are three section to the build each of which connect together to create Luke’s cave-like home. Lots of interesting grey and green plates are used to make up the base of build and give it a bit of texture. The curved elements, especially those on the front part of the build is a nice touch. A cloth piece is used as a makeshift covering of the doorway, it fits nicely with the design of the set but in the movie, Luke’s doorway is actually a piece of his long lost X-wing. However if a bright orange and white plate was wedged in there, it would probably look a little silly. 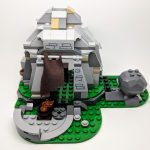 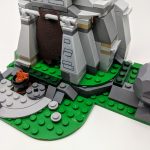 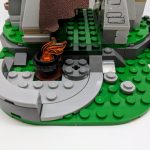 Inside is a little basic, in keeping with the movie, with a little fold away bed and a sideboard area which hides a secret compartment. You’ll notice on the left-hand side of the rear section is small black handle, this is connected to a hidden Technic piece which ‘explodes’ part of the huts wall section. Despite the small area there is a surprising amount going-on in there. 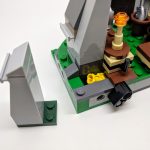 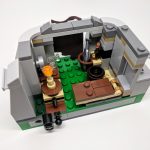 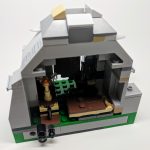 The set is built in such a way that you can gain easier access to the inside of it by removing the roof. This along with the wall section does make the set a little unstable when moving it around, which could frustrate younger builders and just annoys us old ‘uns. And yes there are stickers, however these are actually very welcome here and it gives the outside of the build a bit of extra detail. 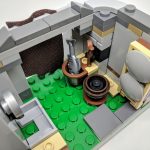 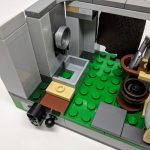 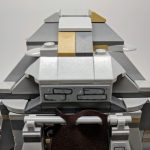 Another fun play feature is Rey’s training area, a key scene not only in the movie but also the trailers, Rey can be seen swinging Luke’s discarded Lightsaber, in the hopes of proving her reluctant mentor wrong. A turning 2×2 element allows you to place Rey upon it and spin her around, there’s also boulder element which could hint at an abandoned plot point from the final cut of the movie. 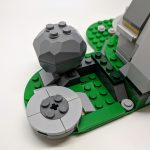 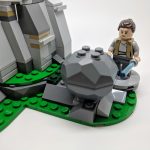 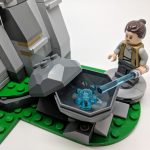 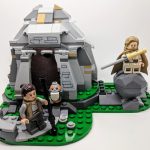 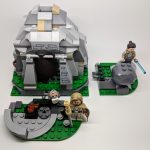 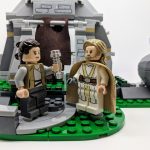 Much was made of Luke’s return to the Star Wars universe on the run up to the release of The Force Awakened was released, only for the long lost Jedi Master to appears for mere minutes without muttering a word. Yet people have been hoping for an ‘Old’ Luke Minifigure for a while now and the one included here doesn’t disappoint. His print detail is similar to past Jedi, using lighter colours to match those seen in the film, which also is a nice nod to Luke’s first Star Wars outfit. Old Luke also has a brand new hair element, this is a nice match to Luke’s wavey hobo-style do, which he sports in the movie although it is a little dark in colour, a problem Luke’s various minifigures have had over the year. This new element really adds to the appeal of what is a very nice minifigure. 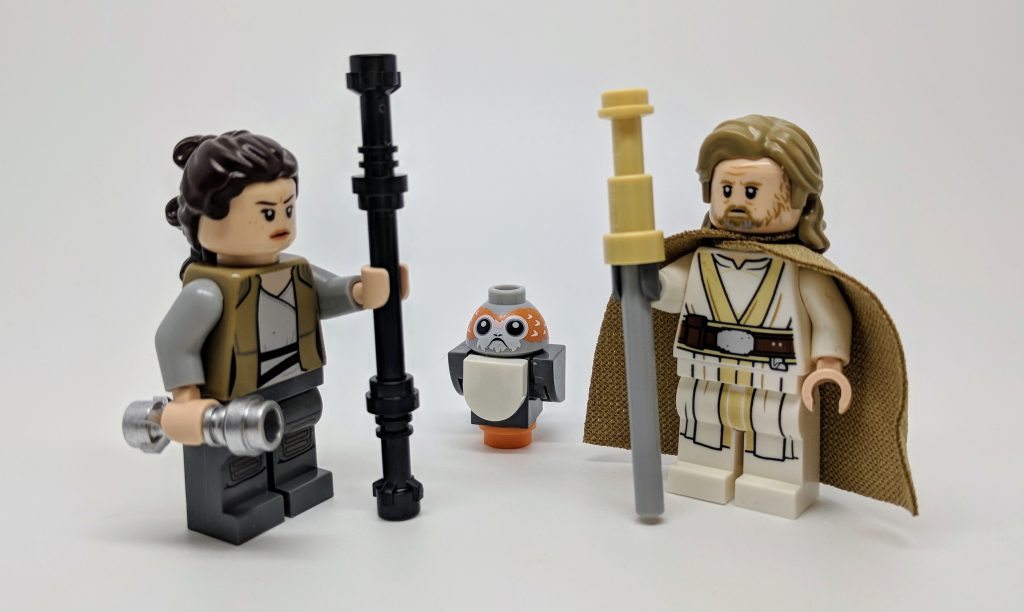 Rey is a little more common than Luke, with her hair element being used on her past incarnations, but she does feature unique new print detail on her torso and legs, to represent her new outfit. It would of been quite cool to use dual mould arms to really capture Rey’s appearance more closely. She includes her staff weapon and Luke’s Lightsaber, I’d like to have seen a backpack element included as well. 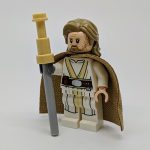 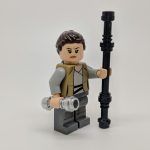 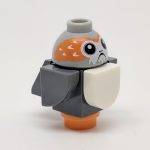 Finally the set includes one of most hotly discussed creatures to appear in the Star Wars films since Jar Jar Binks – the Porg. Some love them, others hate them, but their inclusion in the film was necessary to cover up the real life locations resident puffins. The LEGO Porgs are cleverly made from a studded 1×1 brick a trio of new plate elements and the same dome element used for BB-8. They are quite fun little creatures and certainly a cheaper way to get one than buying the UCS Falcon, which marked their first LEGO appearance.

It makes a change to get something other than a vehicle from the Star Wars sets, the build is quite fun and does a nice job of recreating those stone huts seen in the movie. Play features although welcomed by younger builders, do make the sets a little too breakable. Any slight movement can see the hut collapse easier than if Rey had been doing a spot of Jedi training. LEGO sets are designed so far in advance of movie releases, they often contain elements which don’t make sense to what is seen on screen. Here Rey is confronted with a split apart boulder, which partly matches with the action in The Last Jedi, what is a little odd is this hides a blue crystal. Could Rey have discovered her Kyber Crystal whilst on Ahch-To? It’s possible this was meant to occur in the films original story. 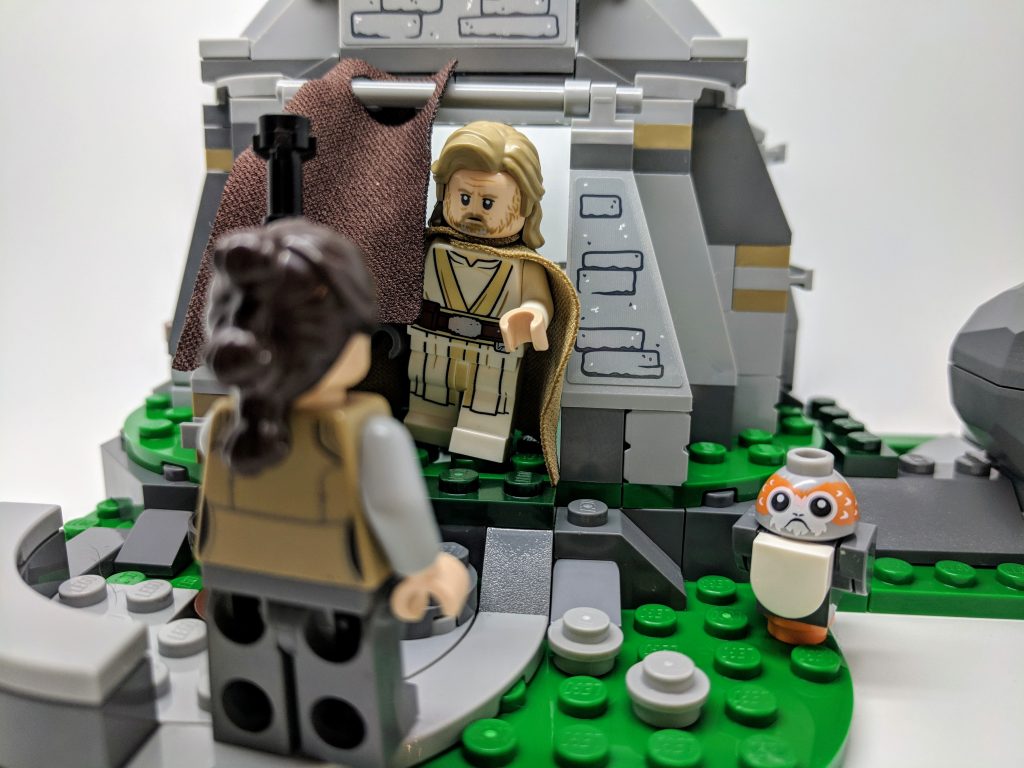 It’s a great little set, that’s fun to build, with great minifigures and welcomed change from some of the familiar crafts and ships which usually make up the LEGO Star Wars range. Ahch-To Island Training is available now from LEGO Brand Stores, shop.LEGO.com, The Disney Store and other LEGO retailers.