Over the last few years, a series of sets from the LEGO® NINJAGO range has been celebrating the history theme. The Legacy sub-theme has seen past sets reimagined with updated designs and Minifigures. This year the Legacy sets are also marking the 10th Anniversary of NINJAGO, with a series of collectable Golden Legacy Ninja Minifigures, spread across various sets. One of those sets is the Boulder Blaster. Originally released back in 2015, the Boulder Blaster is tied to the 4th season of the NINJAGO TV series and features the Kai Golden Ninja Minifigure. What how does this new take on a past set shape up? Here’s my review of the 2021 LEGO NINJAGO Boulder Blaster set. 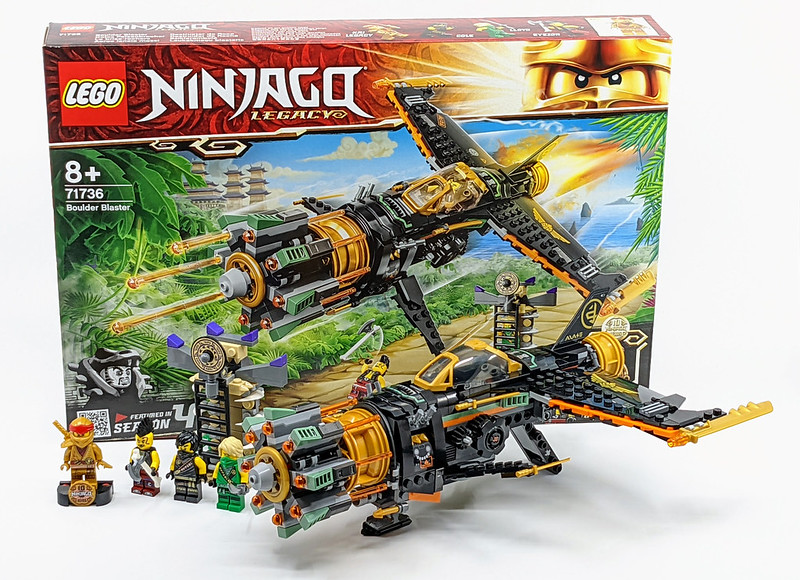 Ninja fans will be thrilled with this modern update of the Boulder Blaster (71736) shooting airplane to stage exhilarating battles from season 4 of the LEGO® NINJAGO® TV series. The airplane toy has 8 spring-loaded shooters on its rotating front to aim rapid fire at the evil Eyezor or at the prison building to release the captured Lloyd.

For kids who are into fantasy action stories
This ninja toy features 4 minifigures: ninjas Cole, Lloyd and Kai Legacy and their enemy Eyezor to give kids everything they need to create fast-moving adventures. New for January 2021, Kai Legacy is a never-seen-before golden collectible figure with a stand to celebrate 10 years of NINJAGO playsets. 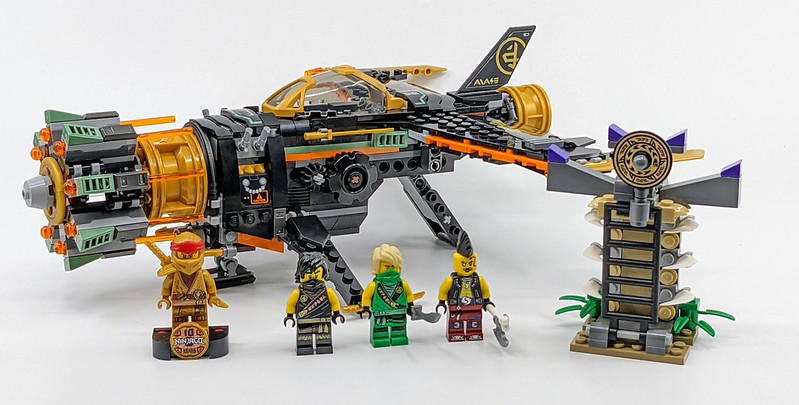 The Boulder Blaster is a roto jet, which was first introduced during the fourth season of the NINJAGO Masters of Spinjitzu TV show. It was constructed in secret by Cole and Karlof while they were imprisoned in Chen’s underground noodle factory. It’s closely tied to the Elemental Master of Earth, Cole. Because of this, the colour scheme of the jet is similar to Cole’s. So it’s mainly black with golden trim and splashes of sand green. 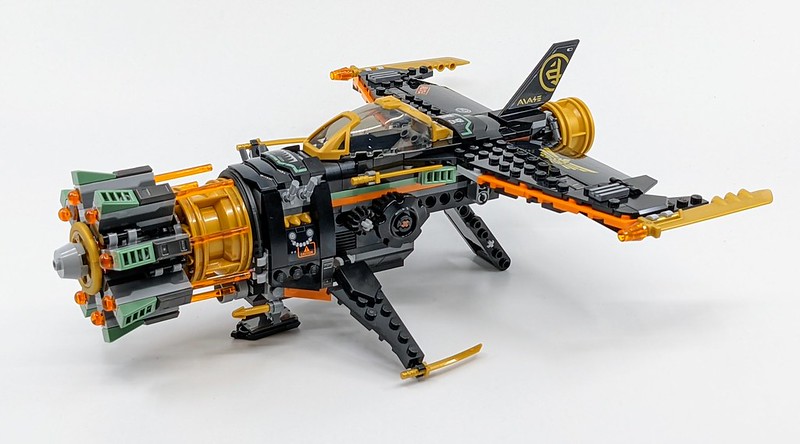 The jet is built in different sections which actually connect together extremely well. Sometimes builds which are made up connecting sections can be either a little complex to put together or are a little weak in areas. But that’s not the case here. Hidden within the central section of the jet is a simple gear system, which acts as the basis of the entire build. 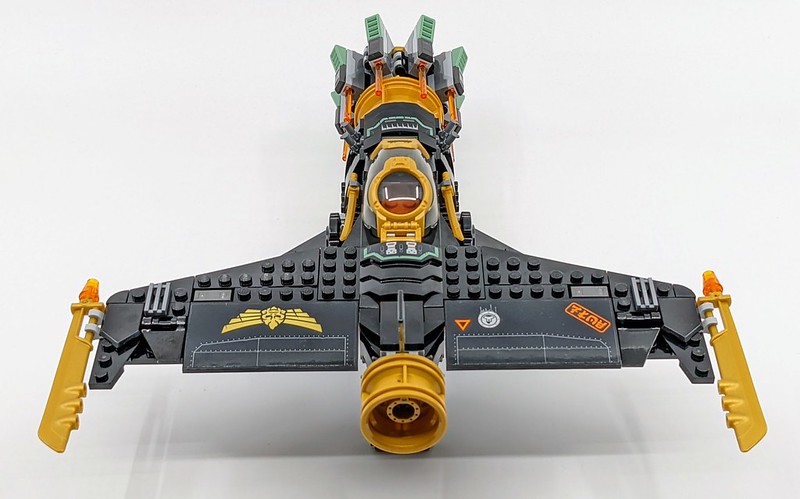 That drum-like section at the front of the jet offers the set’s main play feature and it’s rather fun. The gear system powers the drum, twisting it around. There are a couple of gears either side of the jet’s cockpit which can be used to spin the drum, this is loaded with flick missiles. The action of making the drum turns, causes the tail of the missiles to hit a wheel hub and shoot from the jet. The action has been integrated into the build nicely. There’s a Technic beam handle to the rear of the jet, which adds ratchets up the swooshable nature of the sets amazingly, it also makes the entire build almost weapon-like. 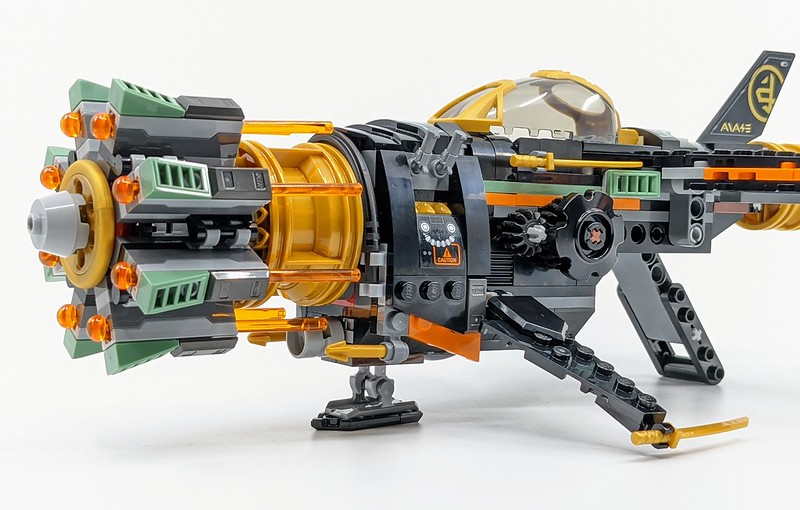 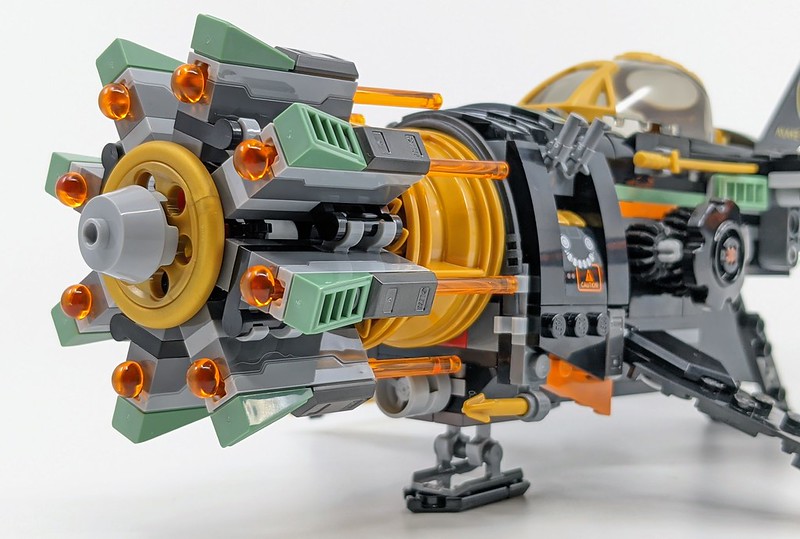 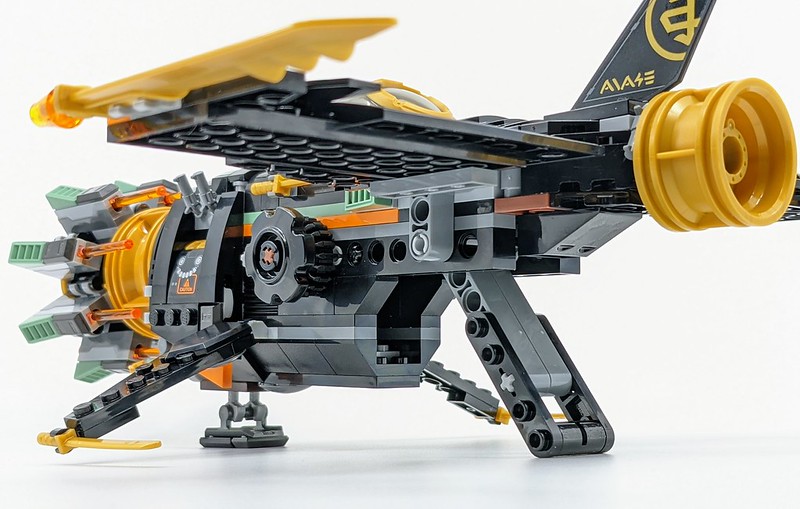 Small detailing such as the sand green trims and stickers add to the overall visuals of the set. It’s a great take on the original design and improves on it in many ways. For example, the handle at the back of the jet is less prominent but still adds stability to the jet when placed on a surface as well as being a great way to zoom it around. The improved cockpit canopy is also a neat addition and is much better than the one used on the 2015 version. 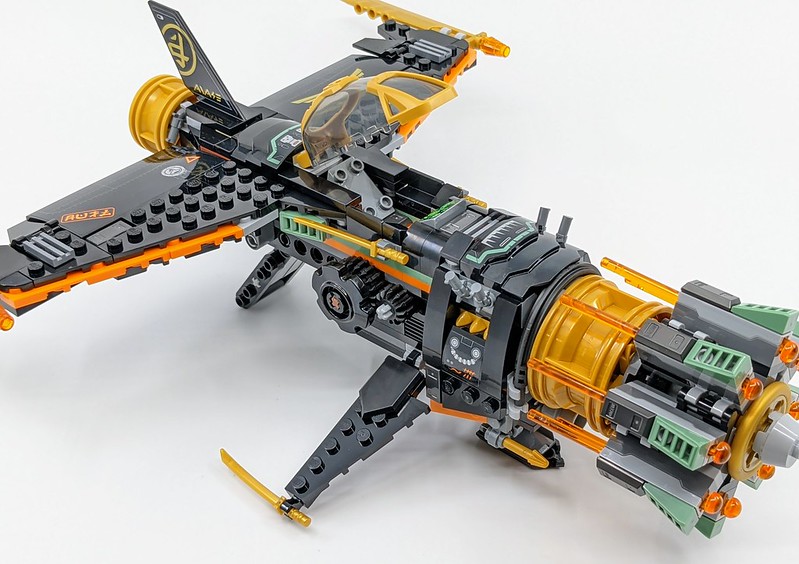 But the set doesn’t just include the jet, there is also a small Anacondraian prison chamber. The colours used for this ties to the snake-like for. It also includes a simple play feature, flipping back the dial section above the chamber causes the bars to flip open. A similar section wasn’t included in the original set but is a nice addition. 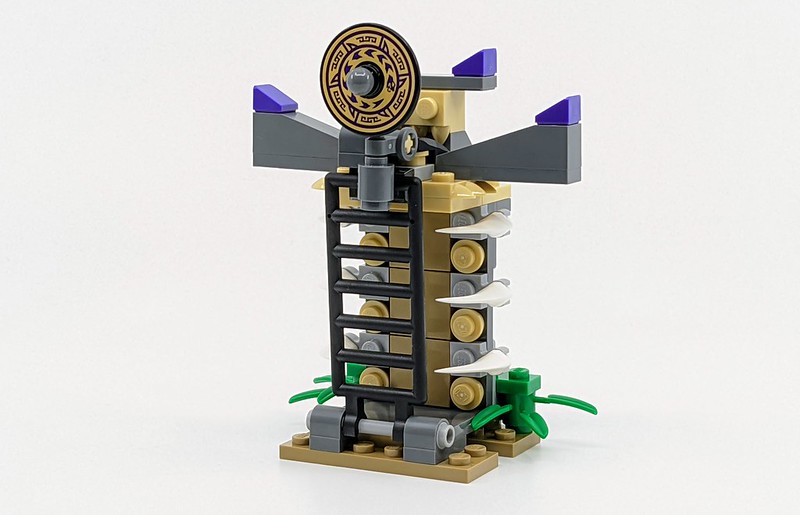 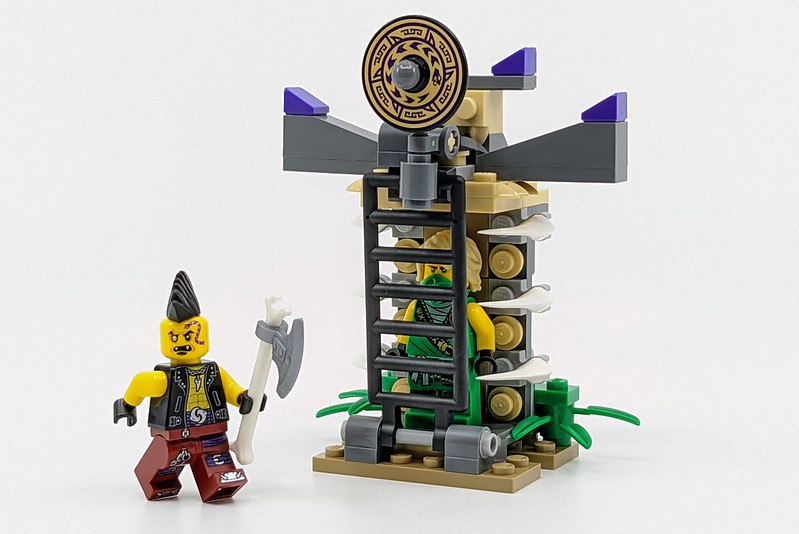 As the set is closely associated with Cole, it’s no surprise he is one of the four Minifigures included in the set. He is also the only character to make the cut from the original set. Joining Cole is fellow ninja Lloyd. Both ninja characters use their more recent appearance. I like the modern take on the characters although it does seem a little confusing considering the set is based on earlier seasons of the show. Along with the good guys, the set includes bad buy Eyezor, a member of the Anacondra. Here he appears in his human form, which is similar to the version included in the 2015 Condrai Copter set. I really like the snake tattoo on Eyezor’s face, in fact, the graphic detailing on all characters is great, especially the symbols on the back. 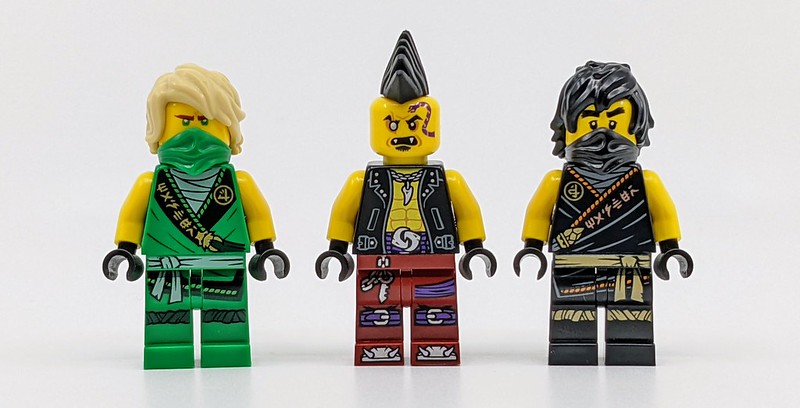 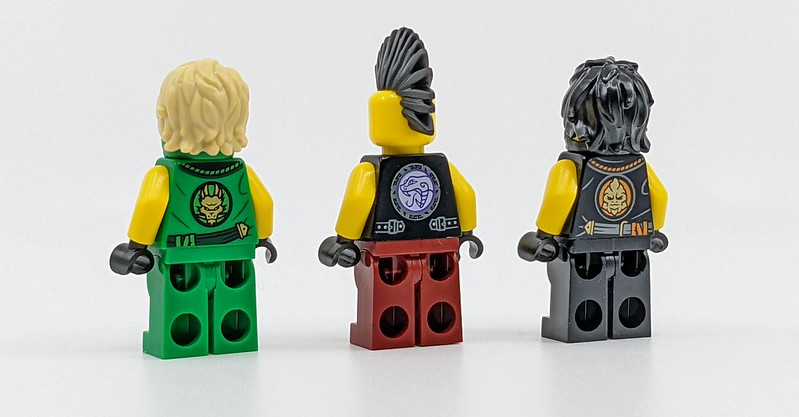 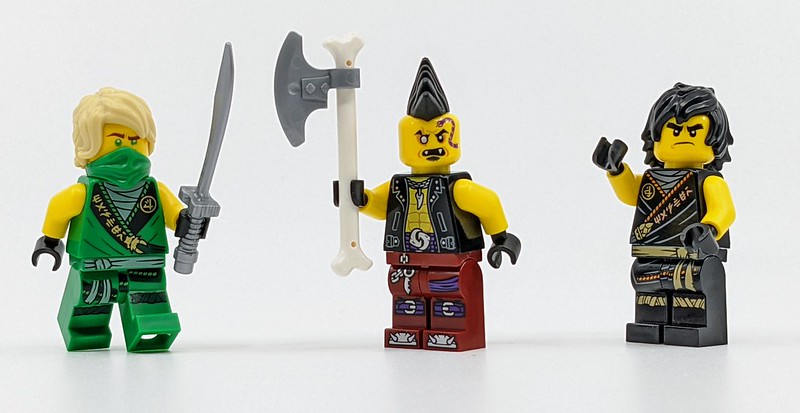 To coincide with the 10th Anniversary of NINJAGO some of the 2021 Legacy sets include a golden version of a character along with a small display plinth and yes the NINJAGO 10th Anniversary logo is a printed element. This set features Kai, who is kitted out in a mainly golden ninja outfit. This uses the modern-day ninja hood. Whilst I like the fact the 10th Anniversary is being celebrated in this way, it would have been great if the Minifigure matched the characters original design, complete with the old style hood. Similar to what they did with the LEGO Star Wars 20th Anniversary Minifigures. Regardless, I obviously want to collect all the golden ninja now. 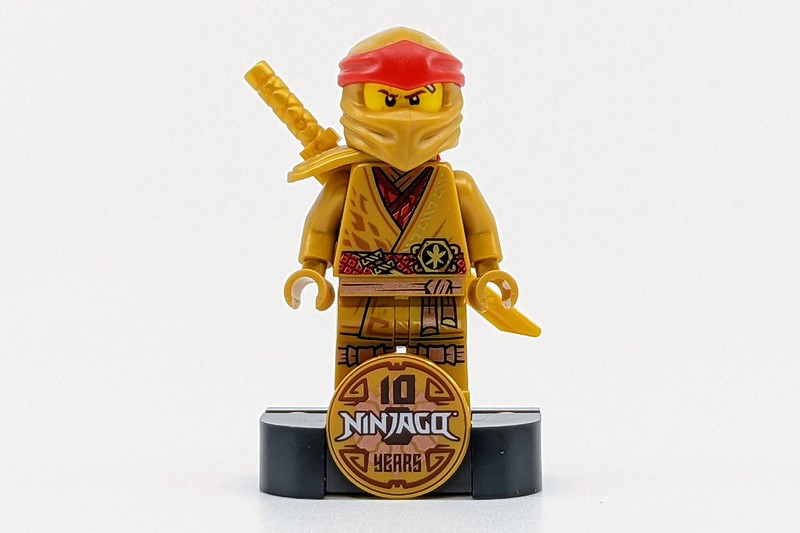 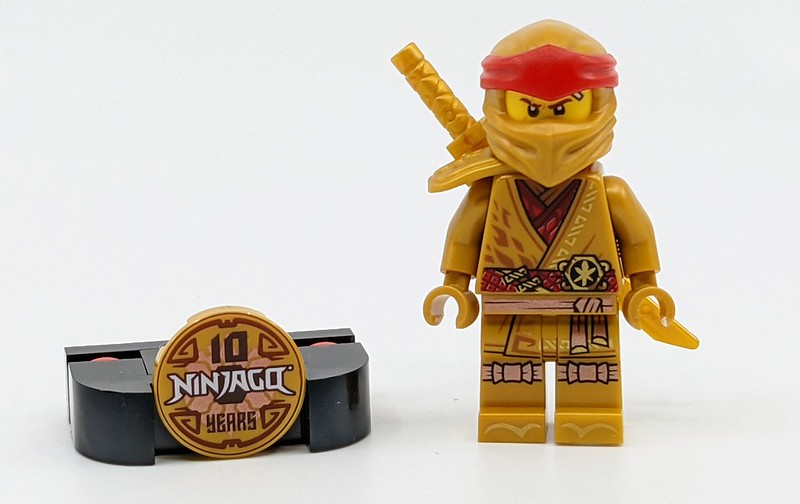