For the last 35 years, Mario has encountered a vast array of foes. With each new Mario adventure, new enemies pop up across the Mushroom Kingdom and beyond. Many of these can be found in the various LEGO Super Mario Expansion Packs. Some of the lesser-known bad-uns have been captured in LEGO® form in the LEGO Super Mario Character Pack series. Similar to LEGO Minifigures, these blind bagged mini sets feature one of ten different collectible characters from a range of different Super Mario titles. Ahead of their release on January 1st, here’s my review of the second series of LEGO Super Mario Character Packs.

Give LEGO® Super Mario™ fans a treat to help them create even more exciting levels. Collectible toy Character Packs – Series 2 (71386) each contain a mystery, buildable character with an action tag. There are 10 LEGO Super Mario characters to collect: Huckit Crab, Spiny Cheep Cheep, Ninji, Foo, Parachute Goomba, Para-Beetle, Poison Mushroom, Thwimp, Fly Guy and Bone Goomba. Each is designed to be used with the Adventures with Mario Starter Course (71360), which is needed for interactive play. 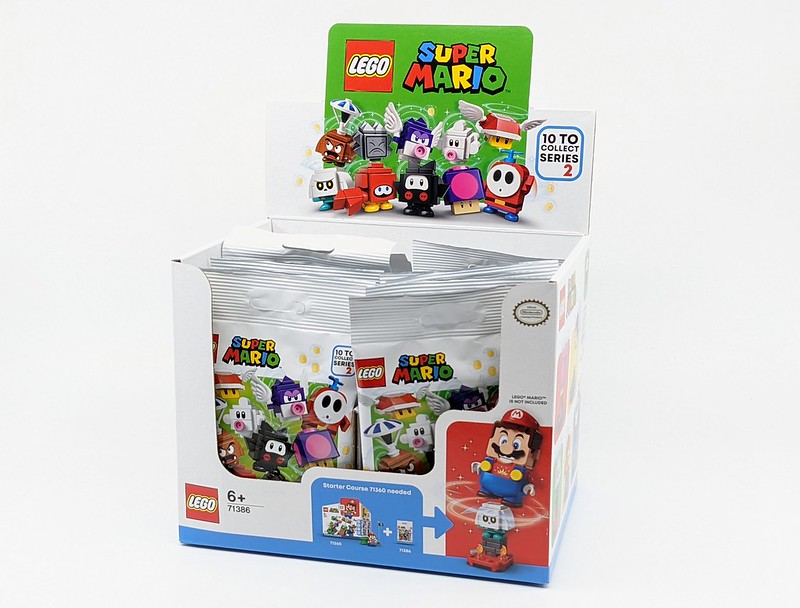 Each set is themed around a particular Mario enemy, with the series featuring ten new characters. These are not any of the big names, such as Koopa Troopas or any of Bowser’s inner circle instead they include some of the creatures, recruited by Bowser or that just take a dislike to Mario, during his adventures. Each of the characters is entirely brick-built and feature printed elements, with not a sticker insight, beyond the pre-applied Action Brick tags. They also include a themed display base, which not only shows off the various characters in a cool way but also allow them to be easily incorporated alongside other LEGO Super Mario Expansion Sets. 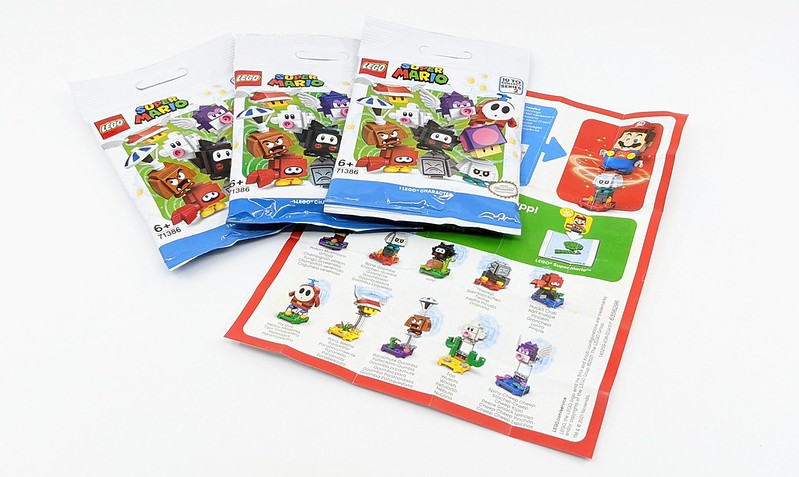 These display bases are each themed to different biomes, found across the LEGO Mario sets and also recognised by the LEGO Mario figure. So there you’ll get yellow for desert, blue for water, red for lava, green for grassy areas and new for 2021 is the purple coloured sections, which represent the poisonous swamps. Most of the characters are unique to the Character Packs, although a couple of slight variants on those which have appeared in the first wave of LEGO Super Mario sets. 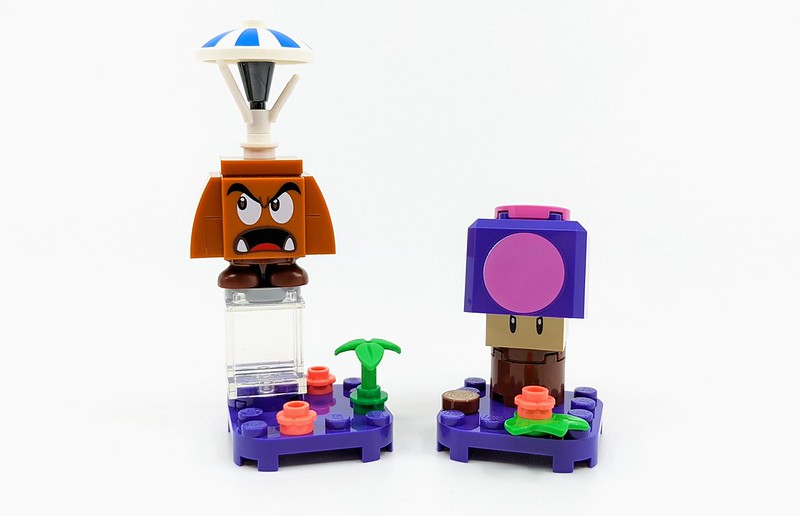 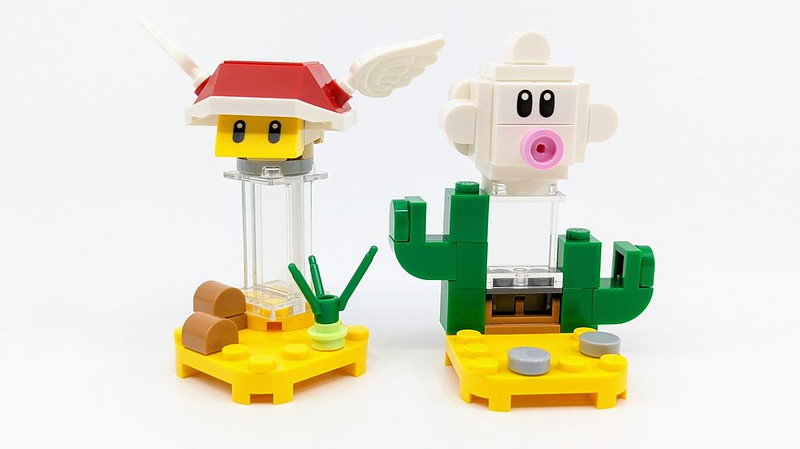 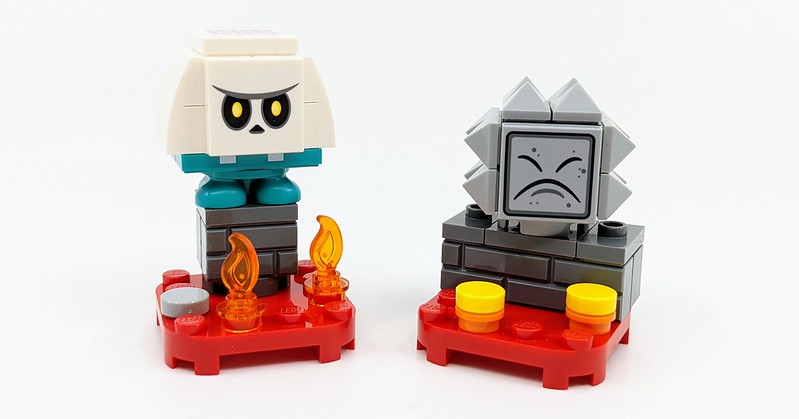 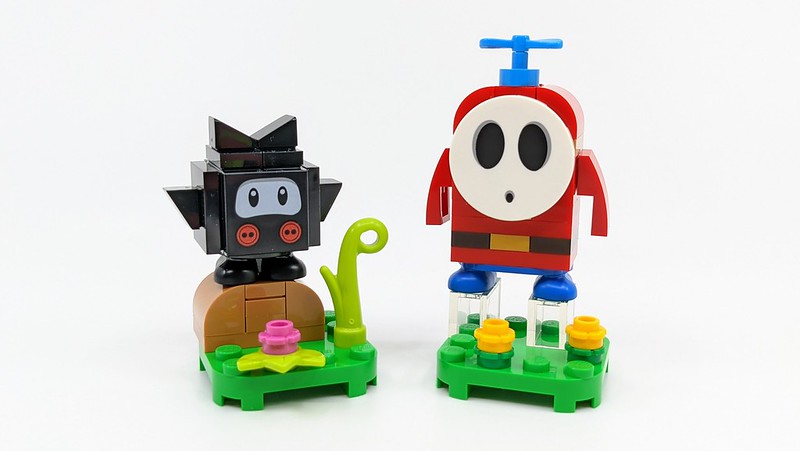 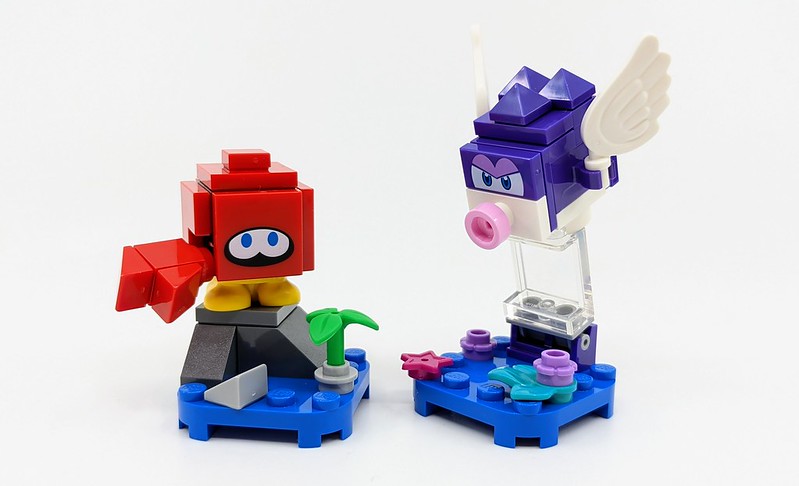 This water-loving foe was first introduced in the New Super Mario Bros. game for Wii and have mainly appeared in spin-off titles since then. They are mainly covered in a red shell, with a single claw used to throw things your way, should you get too close. Although a lot more blocky in LEGO form, the brick-built version still looks quite nice, especially sitting upon a rocky mound. It also features an Action Brick plate on it’s back. 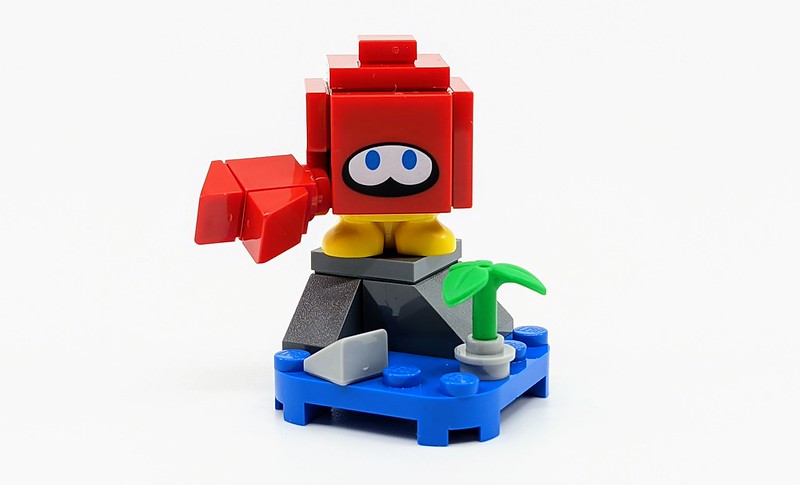 The Cheep Cheep fish have been flinging themselves from the waters of Mushroom Kingdom since Mario’s very first NES adventure. Three years and three games on, a new member of the species appeared in the form of Spiny Cheep Cheep. They look like a normal Cheep Cheep, with the addition of spikes and purple colouring. The LEGO version is also similar to the standard LEGO Cheep Cheep, with a far angrier face and a couple of 1×1 pyramid studs to represent the spikes. 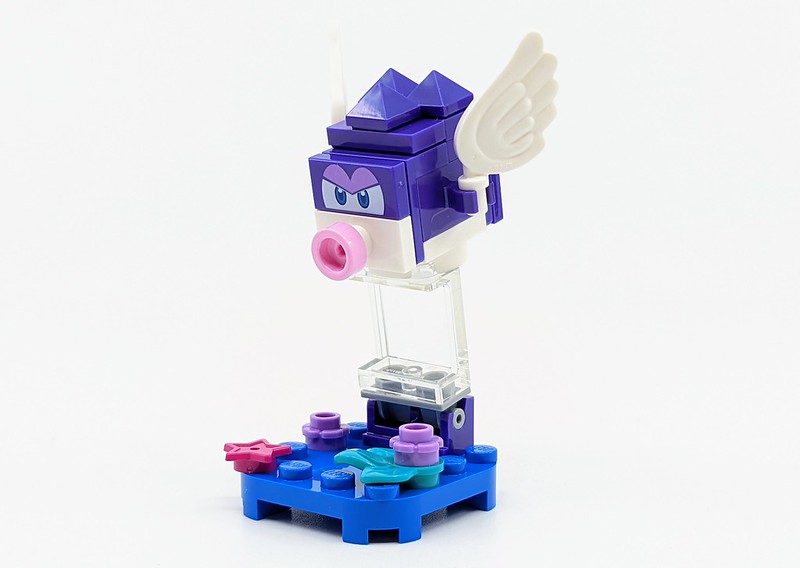 Ninji are rather odd little things, which were originally introduced in Super Mario Bros. 2. As this was a completely different game, reskinned to include elements of the Mario series, it explains why this particular enemy feels a little different to most others. The LEGO version is based on more recent versions of the character, this switches a little black creature with teeth and claws for something wearing a black outfit, decorated by a pair of red buttons. The blocky nature of their LEGO form means they look a little their most recent outing in Paper Mario: The Origami King. 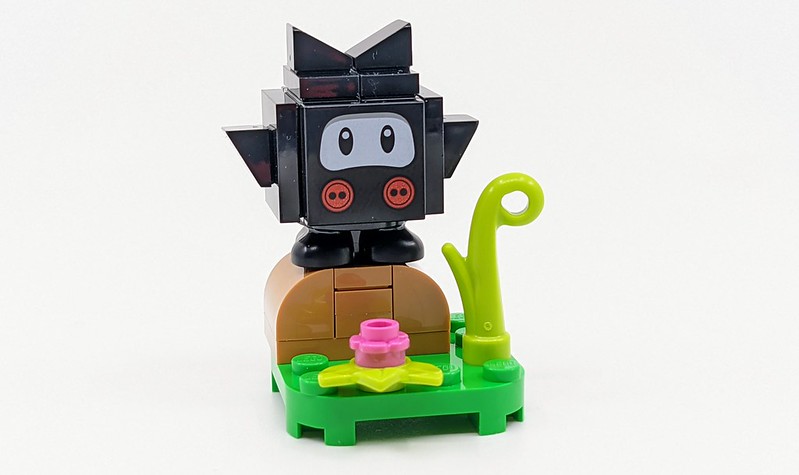 Foos are cloud-like objects which were introduced in the Wii game New Super Mario Bros. They are a smaller, cuter looking version of the Fwoosh from Super Mario 64. It’s not easy recreating something some curvy with LEGO elements, especially in such a small set, but the 1×1 half curve elements work well enough. I’m not sure if the mouth would have been better suited to being printed instead of using the pink 1×1 stud with shaft piece. 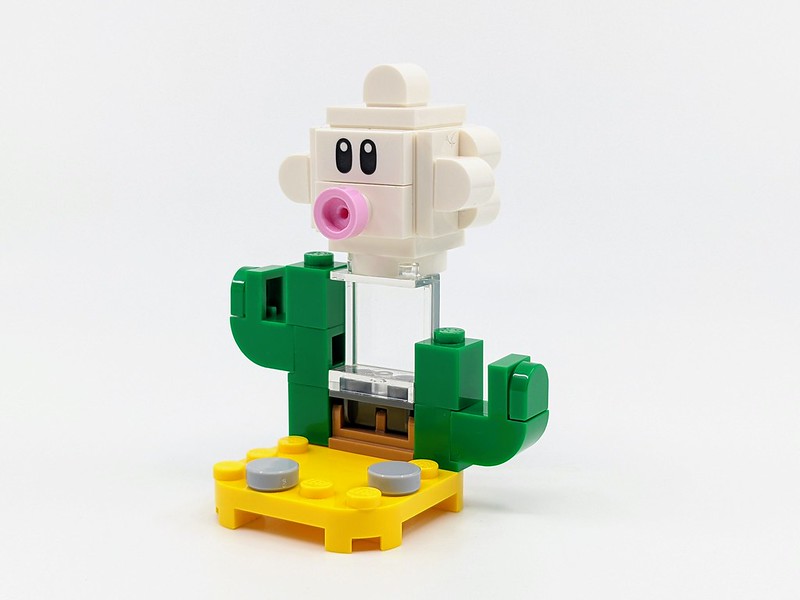 Para-Goomba arrived from the skies in Super Mario World and as the name suggests they are Goomba’s sporting a parachute. This allows them to slowly float toward the ground from above. They are a fairly rare enemy, only appearing two games since 1990. The LEGO version takes the easy route by simply adding an umbrella element to a standard Goomba, the original character was a slightly different colour. A special mention must go to the use of a white flower stalk element for the parachute strings. 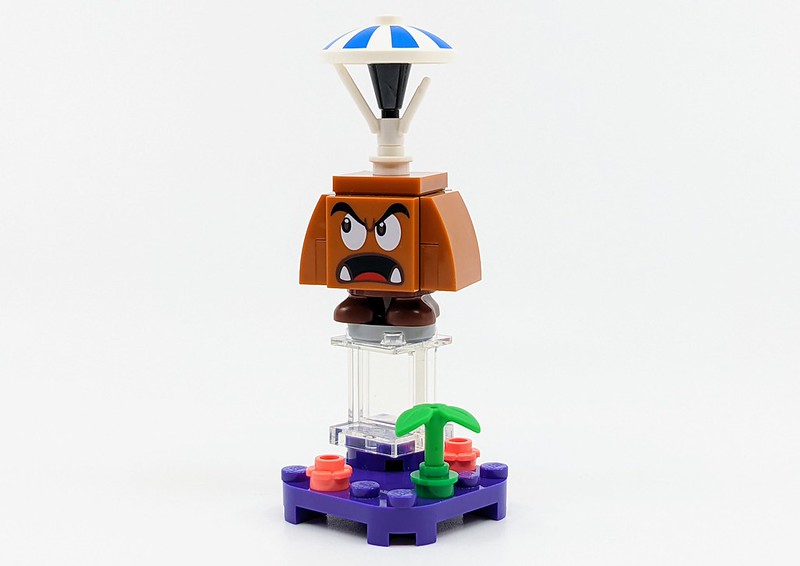 May look like Koopa Troopa hidden within their shell, but Para-Beetles are far more tricky to dispatch than their turtle-like companions. The Para-Beetle first appeared in Super Mario Bros. 3 and take the form of armoured beetle-like, winged creature. The LEGO version uses the same shell element as the Koopa Troopa, with a couple of the spikes swapped out for connection points, where you can attach a couple of wings. 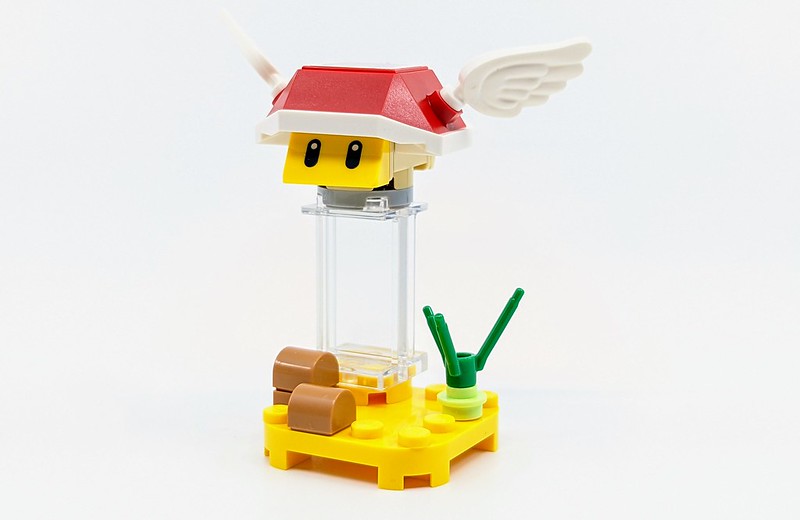 The Poison Mushroom first appeared in the Lost Levels version of Super Mario Bros. and have had their appearance tweaked a little over the years. They look similar to other Power-up Shrooms from the Mario franchise, with a different colour palette and a slightly angry expression. They have the opposite effect of normal shrooms, causing Mario to lost power-ups or coins. The LEGO version uses the same mushroom cap element as other LEGO shrooms and it’s the only one of the Character Packs to effect LEGO Mario. Causing him to get very dizzy. 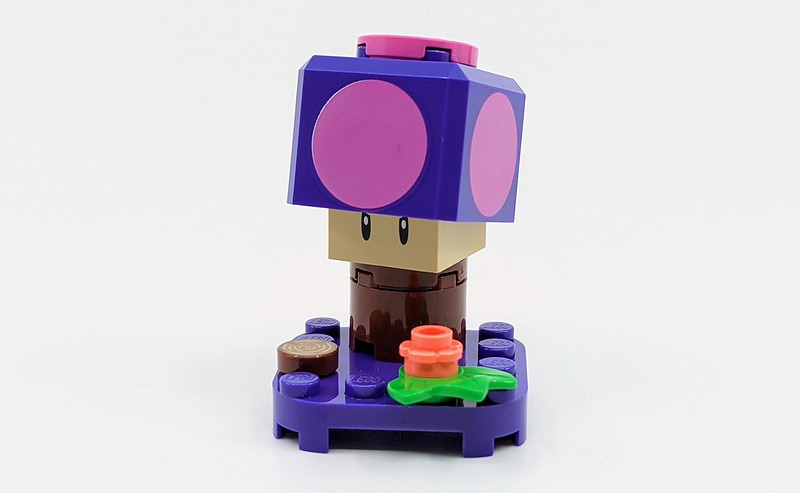 Although the Thwomp is a mighty rocky block which drops from above, it has a smaller version called a Thwimp. This is also a rocky block, it’s just a little less deadly. It’s also one of only a few Mario characters to appear in the Legend of Zelda series. The LEGO version does a better job of recreating the character than it does the Thwomp, this is thanks to having pyramid studs on the sides and top. 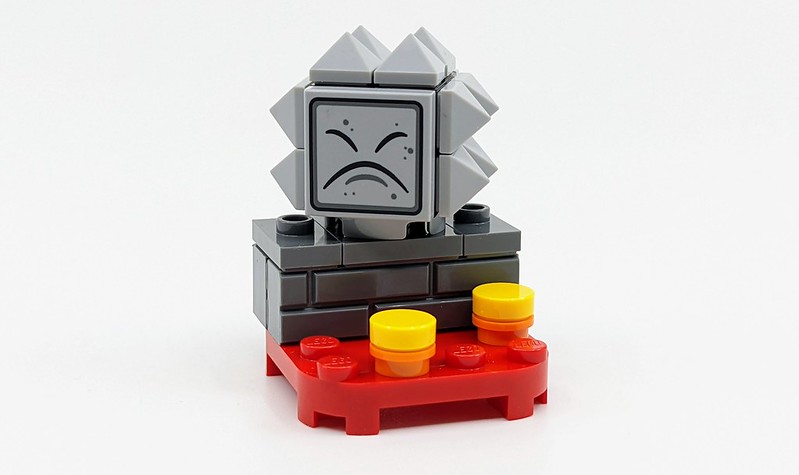 Like many of the bad guys across the Mario games, many of them have variants. This includes the Shy Guy, who can also take the skies in it’s Fly Guy form. It’s basically the same character with a small propeller on its head. Which is also the case for the LEGO version, the overall build of Fly Guy matches that of the Shy Guy found in the Boomer Bill Barrage expansion pack. 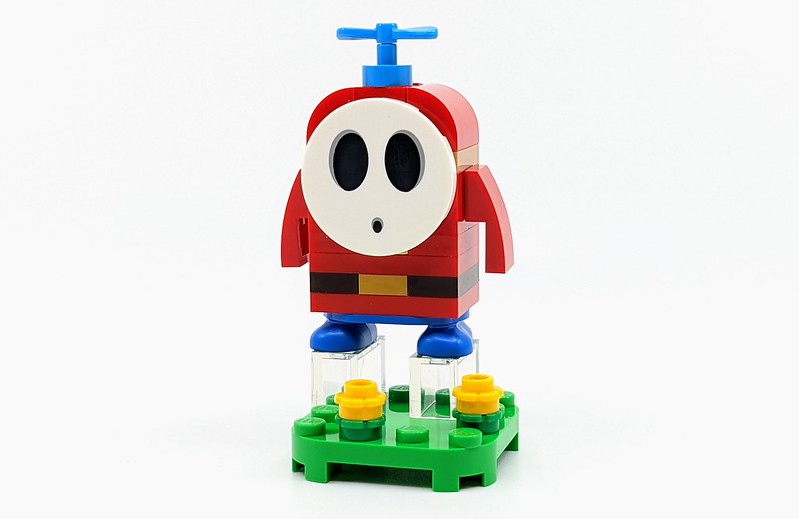 The Bone Goomba is surprisingly the most tricky to recreate, it may seem like a boney version of a Goomba, but it’s in fact a different coloured Goomba wearing a skull-like hat. The build is similar to other LEGO Goomba, which is why it doesn’t look as true to the game character as others. The use of a print on 1×3 plate above the legs to represent the two teeth of the skull is the best way of capturing the look, without using or creating different elements. 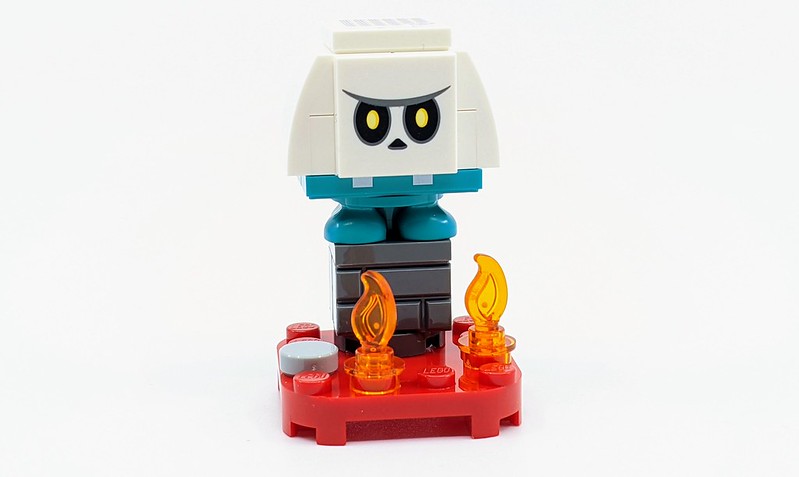