LEGO® Mario is back in action, with a collection of new expansions packs, Power-up Suits, collectable characters and a new Maker set in 2021. After the success of the first range of sets, where else in the brick-built Mushroom Kingdom can LEGO Mario head? Well, it seems the poison swamps are on the cards, with these new sets offering a new biome for LEGO Mario to interact with. So lets-a-go with the first of the LEGO Super Mario 2021 set reviews and take a look at the Wiggler’s Poison Swamp Expansion Pack. 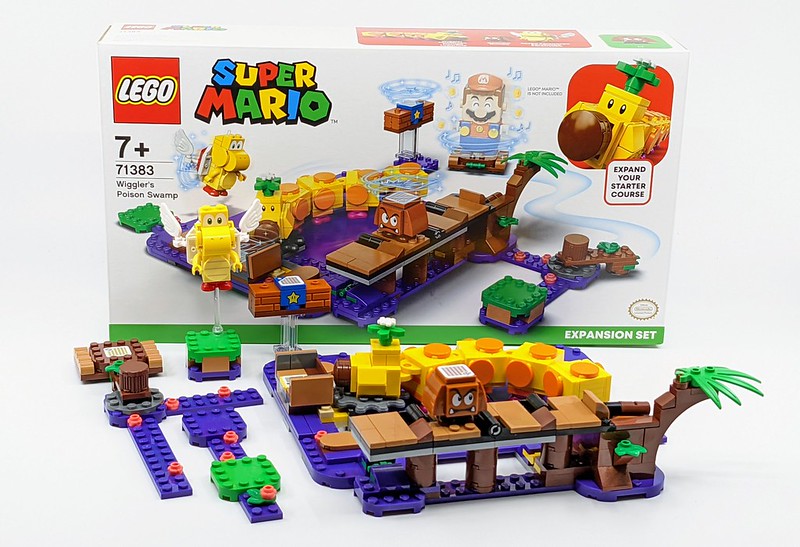 Encounter a Wiggler in the Soda Jungle with this action-packed Expansion Set to add to your LEGO® Super Mario™ Starter Course! Wiggle and slam the Wiggler to unfold the secret bridge. Beware of the Goomba hiding under the bridge. Use the rotating platform and raft to avoid the poison swamp. Gain awesome powers from the Super Star Block and defeat the Koopa Paratroopa to complete your epic journey! 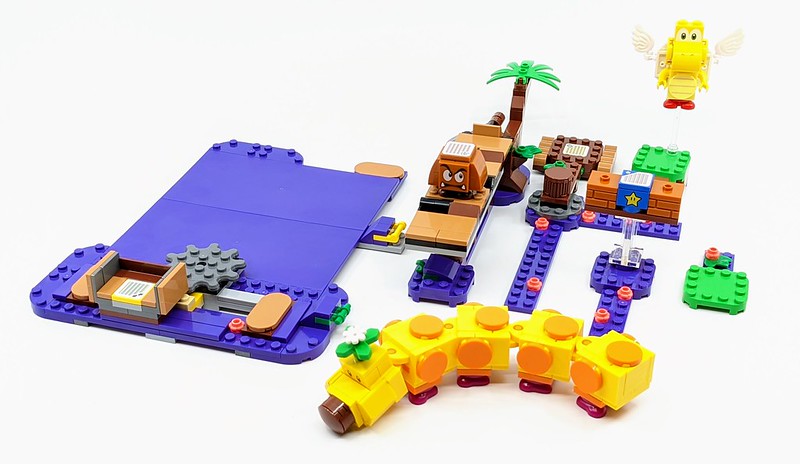 Before you get going with these new sets, you’ll need to update the LEGO Super Mario app and connect LEGO Mario for an update. Once he’s full of all the new tasty data, you’ll be able to access the digital instructions for the new 2021 sets and interact with the new elements they contain. One of which is the purple surface used to represent the poison areas of the Mushroom Kingdom. Although not the best place for our plucky plumber to splash about in, Wigglers doesn’t have such issues. 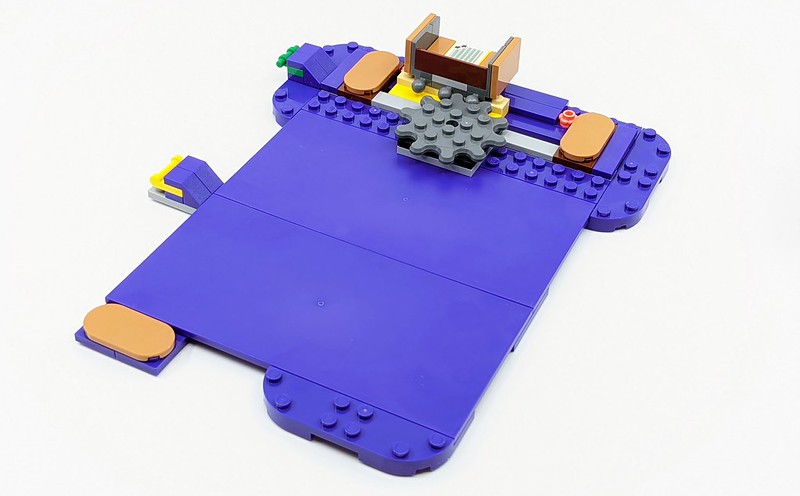 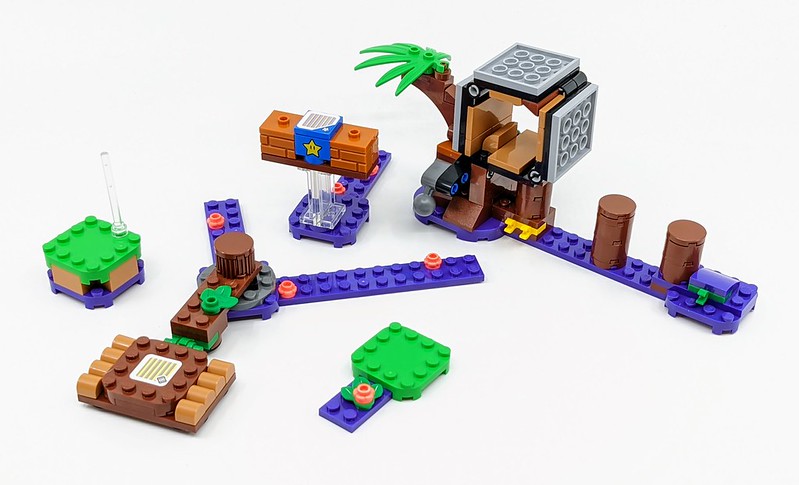 The Wiggler is a caterpillar-like creature, who first appeared in Super Mario World and aren’t really an enemy of Mario, unless engaged. In its normal state, Wiggler is yellow in colour with a flower sprouting from its head. The LEGO version is based on this version, with the unique feet elements, used on many of the LEGO Super Mario creatures, the base of each section of its body. These are each built independently from each other and connected simply by a 1×2 plate with a vertical shaft. The reason for this will be apparent once connected to the rest of the set. Which is done by the head section. Once the whole of the Wiggler is complete you’ll need to introduce it onto a splat gear topped platform. 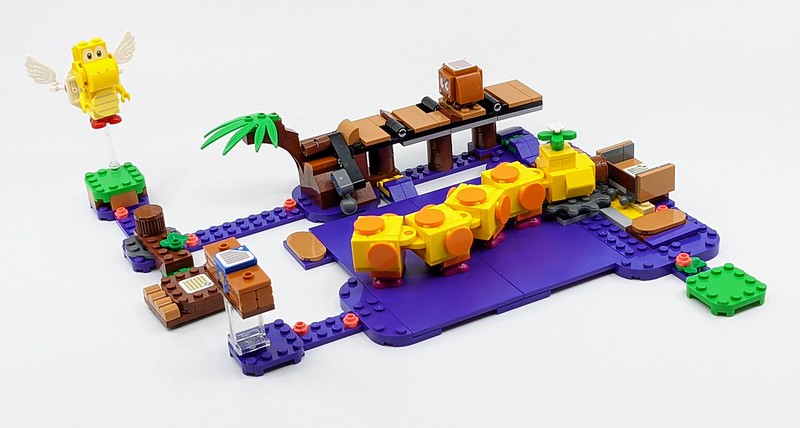 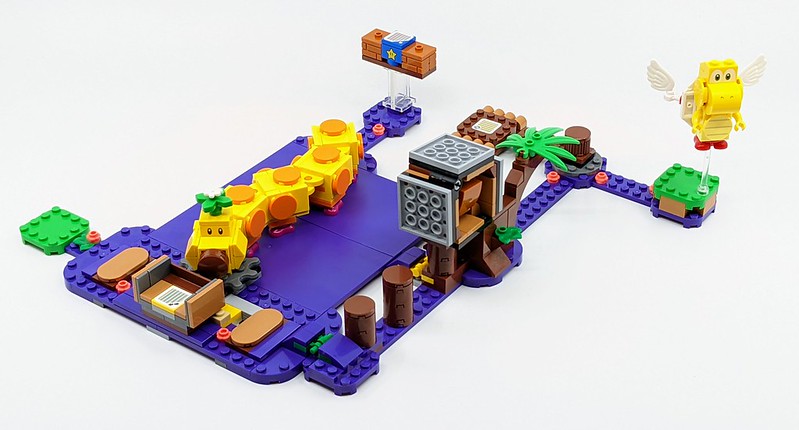 The poison swamp has quite the surface area compared to other LEGO Super Mario sets, thanks to a pair of large purple coloured studless plates. These offer the perfect area for the Wiggler to move around in, which is achieved via a platform upon which LEGO Mario can sit and then sliding it from side to side, causes the splat gear to waggle Wiggler around. Because of how each section of the Wiggler is connected, when moved via the splat gear, it slides across that large studless surface. LEGO Mario will collect some coins, and if you hit it just right, it will also cause a rolled-up bridge to reveal a new path and a Goomba. 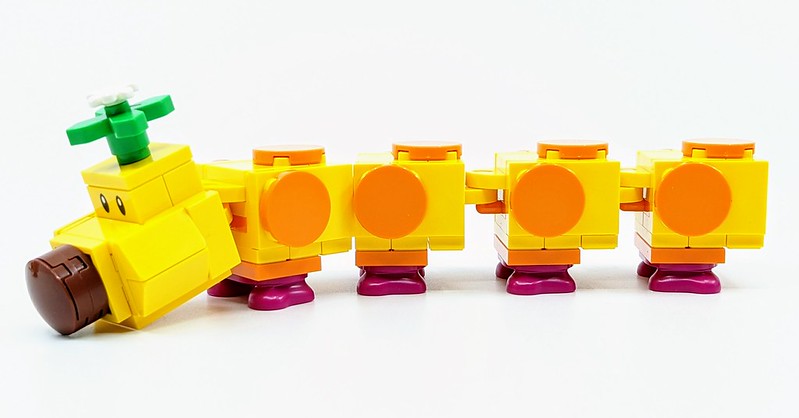 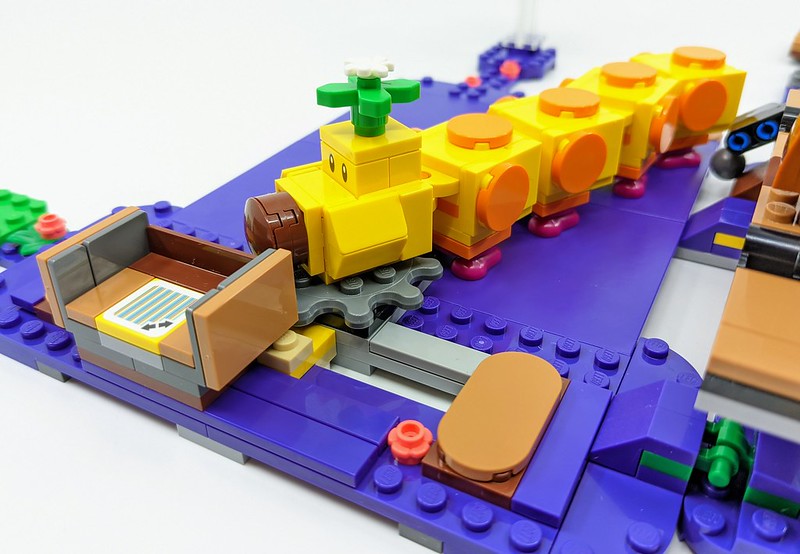 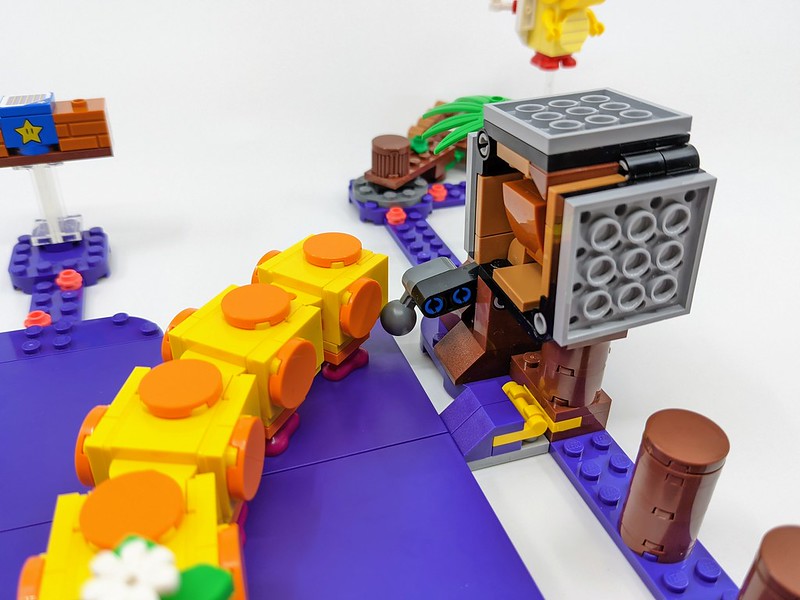 This bridge section offers another buildable section, once built it simply clips to the larger plate via a couple of different coloured clips. With the other sections connecting via a series of plates and those special connector island plates created for the LEGO Super Mario sets. One other section which is unique to this set is a small wooden raft. This is clipped to a rotatable section and can be unclipped once LEGO Mario is riding it, to find a few bonus coins. 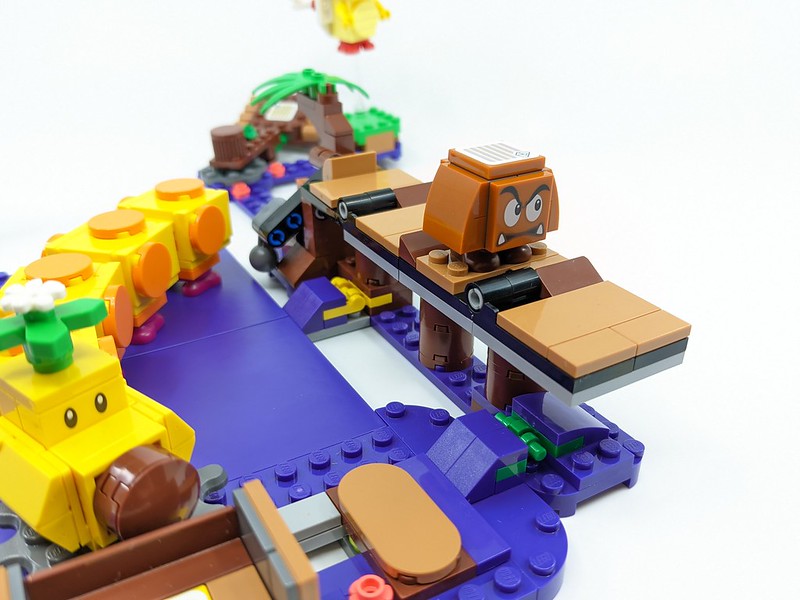 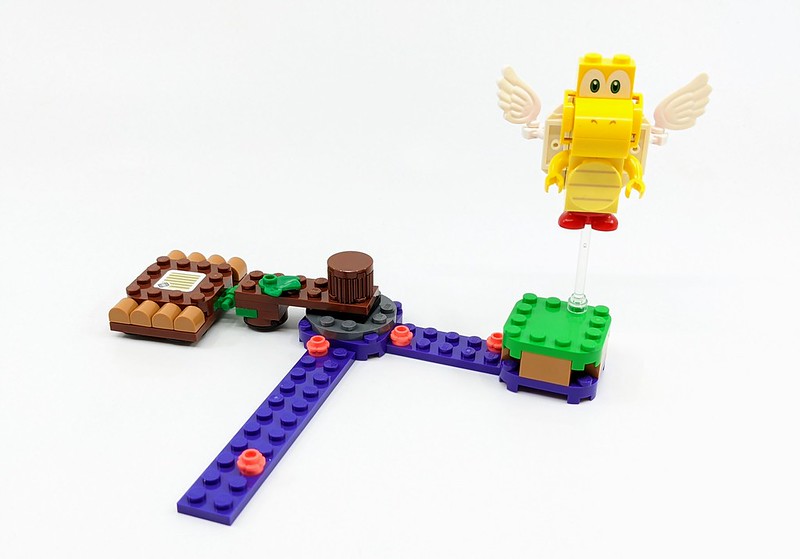 It wouldn’t be the Mushroom Kingdom without a few enemies to defeat. Here you can stomp on a Goomba, once it’s been uncovered from the rolled-up bridge and you can also take on a new addition to the LEGO Koopa Troopa platoon, with a flying Koopa Paratroopa also included in the set. This is an identical build to other Koopa, but two of the spikes on the special shell element are removed to allow a couple of clips to be inserted, so they can hold wing elements.

The set features five Action Bricks, dotted about the platforms and creature in the set. One on top of the Goomba, with another on the shell of the Koopa Paratroopa. A power-up Action Brick is a feature on the Super Star Block and there is also an Action brick on the detachable raft platform. Finally, there is a sliding platform which causes the Wiggler to move and a very familiar piece of Super Mario music will play, oddly it’s not a tune I’d expect but it’s still a delight to hear. LEGO Mario can recognise each plate to gain coins and these can be integrated with previous sets to let you gain a better score and expand your LEGO Super Mario play experience. 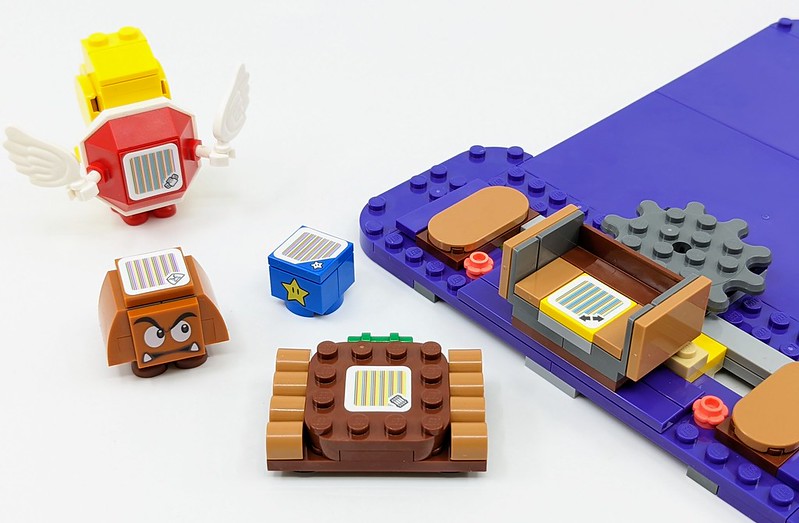 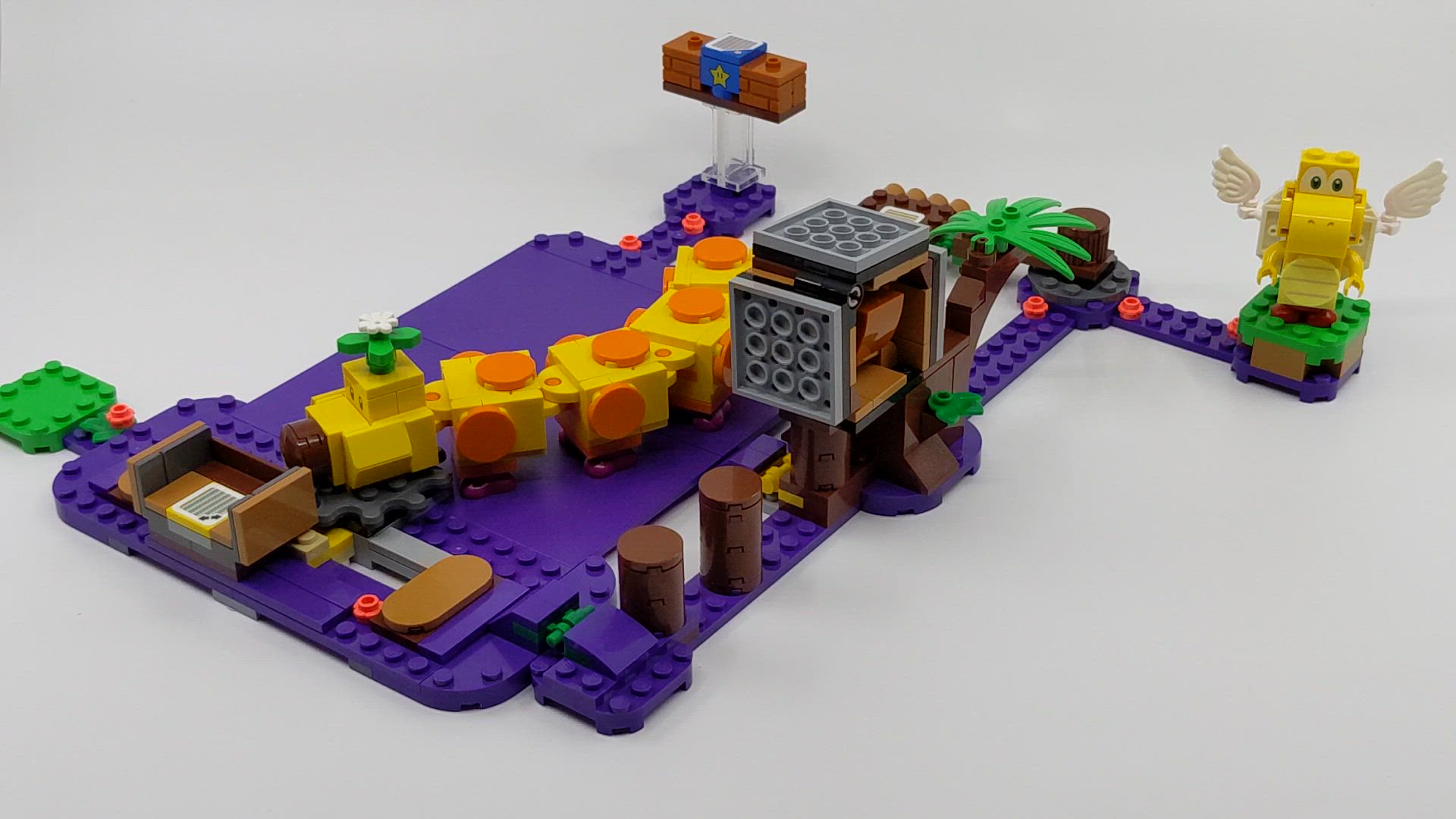 One of the things I’ve found interesting about all the LEGO Super Mario sets has to be how the gameplay from the numerous Mario adventures has been translated into a fluid play experience. The use of Action Bricks certainly adds to this thanks to iconic sound effects and music, but the way you interact with sections of the set also does it’s best to replicate aspects of the digital games, sometimes very loosely. Even though it may now be a case of stepping off the screen into an exact physical representation of the game, what has been achieved with LEGO elements is just as fun. Being able to waggle the Wiggler is fun, especially when the music begins and waggling causes the bridge to reveal a Goomba. The new purple surfaces offer a different visual appeal which will be more apparent when combined with other sets in the LEGO Super Mario collection. Please note the LEGO Mario interactive figure is not included with this set. It can be found in the LEGO Super Mario Adventures with Mario Starter Set. 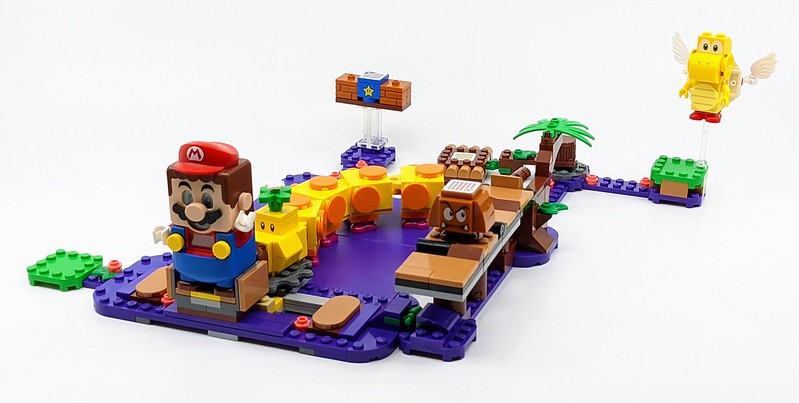