As the LEGO® Super Mario set has shown, the Mushroom Kingdom is certainly a perilous place. Bowser has quite the extended gang of minions to thwart Mario’s numerous attempts to rescue Princess Toadstool. By the time Super Mario 3 came around, Bowser looked beyond his Koopa Troopa goons for some help from environmental enemies. Thwomps can often be found hanging around, before dropping into action should Mario wander by. As they slam to the ground, anyone beneath will either be sporting a rather noticeable flat spot or must dive to safety. This expansion set recreates this action to create another unique play feature inspired by the Mario games. So as I continue my journey through the LEGO Mushroom Kingdom, today we are taking a look at the LEGO Super Mario Thwomp Drop Expansion Set. 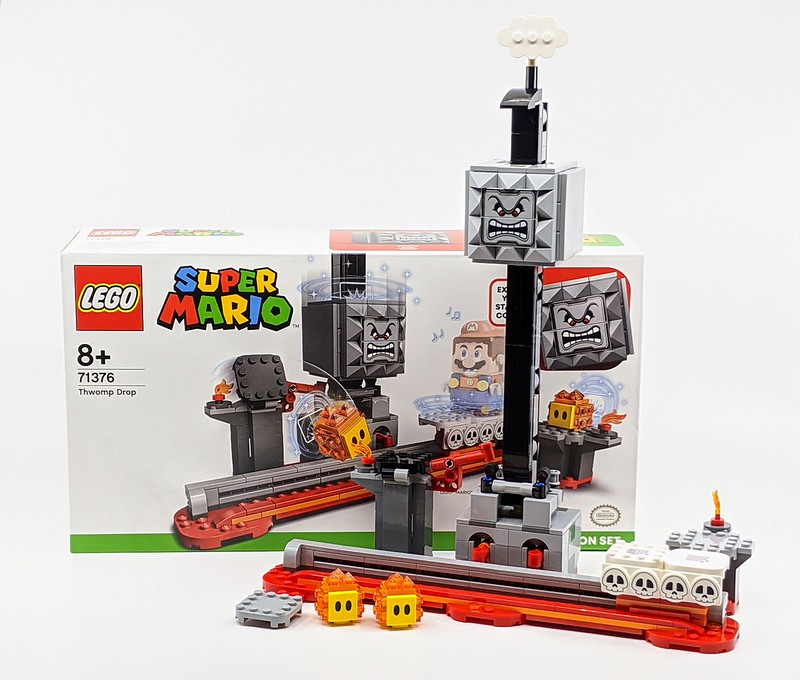 Give LEGO Super Mario fans a fun test with this Thwomp Drop Expansion Set (71376). A terrific gift for kids to add to the LEGO Super Mario Starter Course (71360 – sold separately), this collectible toy playset features a sliding platform for LEGO Mario (figure not included; find it in the Starter Course set) with 2 balance difficulty options, a Thwomp and 2 Lava Bubble figures, plus a Lava Bubble flipping function. 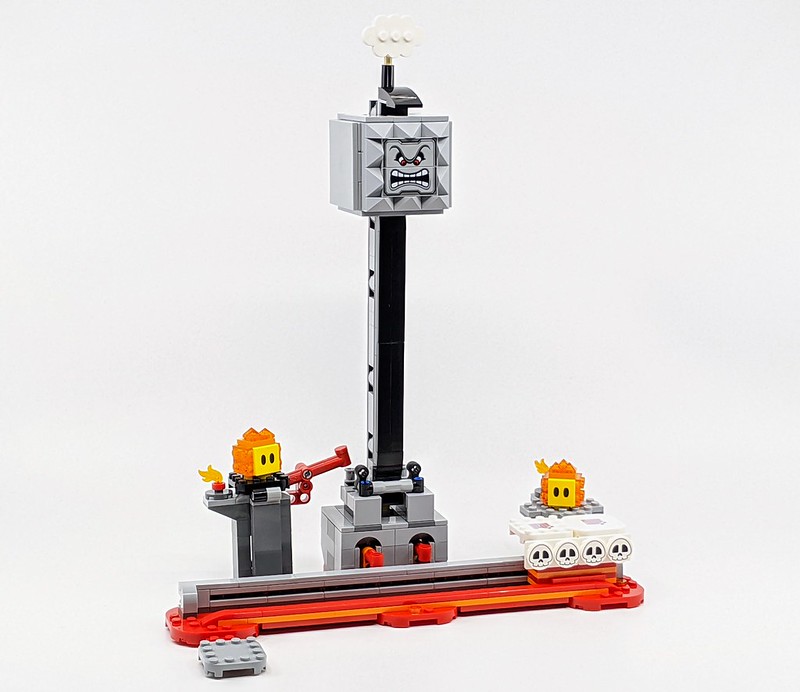 As with many of Mario’s most famous foe, they have a particular motion or attack. This is almost as important as their appearance. The Thwomp may not be able to chase you around or fire things at you, but if you happen to find yourself underneath it, you’ll definitely need a 1-Up shroom or two afterwards. The Thwomp’s signature ground pound is the inspiration for this LEGO Super Mario expansion set. Compared to some of the other sets, the footprint for this one is once compact, which is very deceptive. 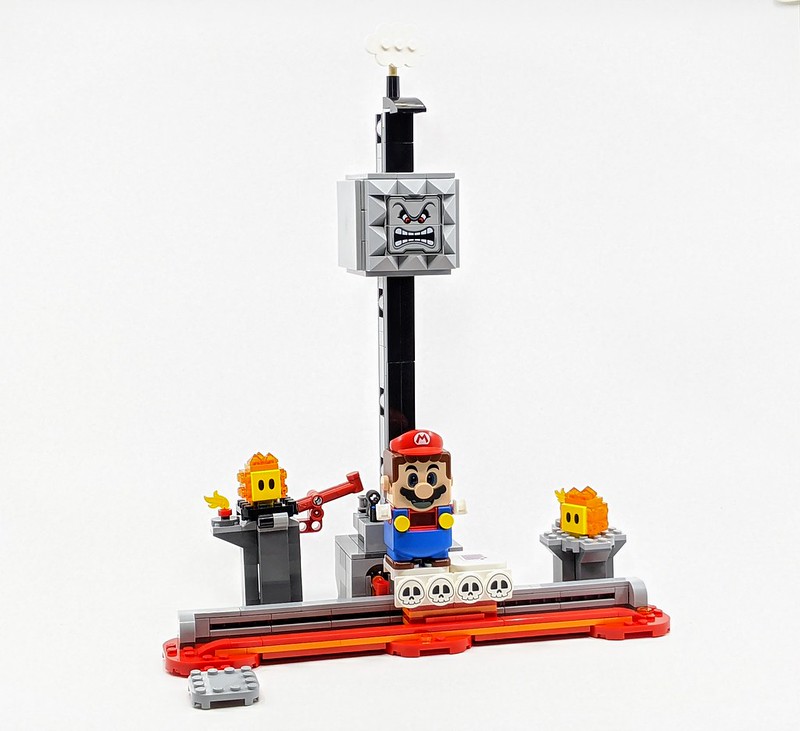 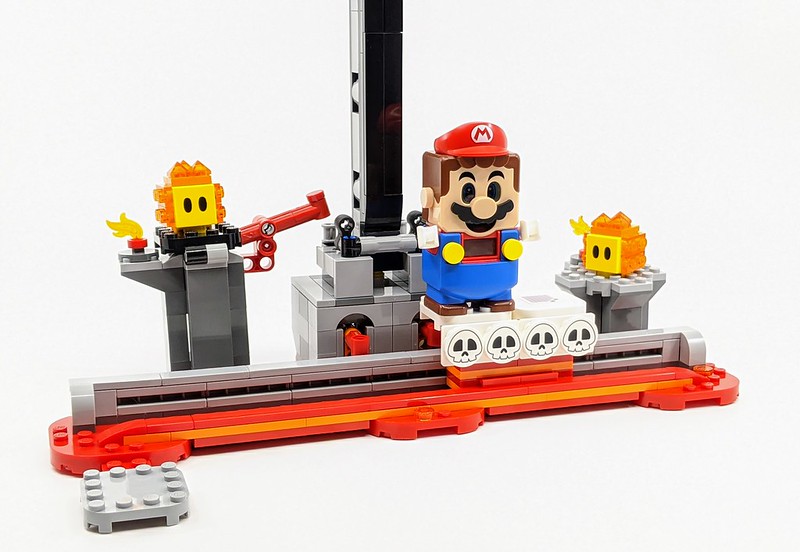 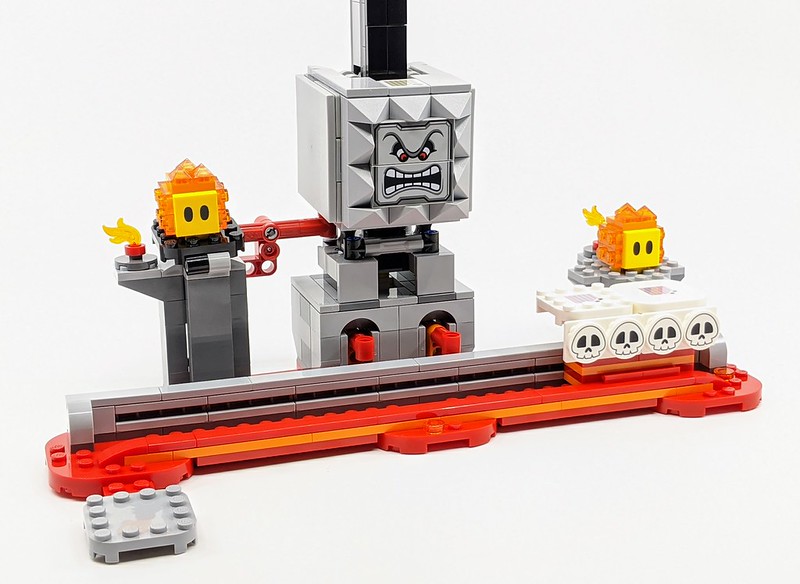 The base of the set is the lava-filled lands often found in and around Bowser’s Castles. So if LEGO Mario should dip his colour-sensing bottom on the red stuff, you can expect to lose some coins and precious time to reach the goal pole. Which is why there is a handy skull raft. This is made up of two of the new small connector island plates, both featuring an Action Brick. You’ll notice one is flat and the other features a border of studs. Like other sets, this offers up two levels of difficulty. You don’t gain any coins by placing Mario on either one, but LEGO Mario is less likely to fall off when connected to the studded side. 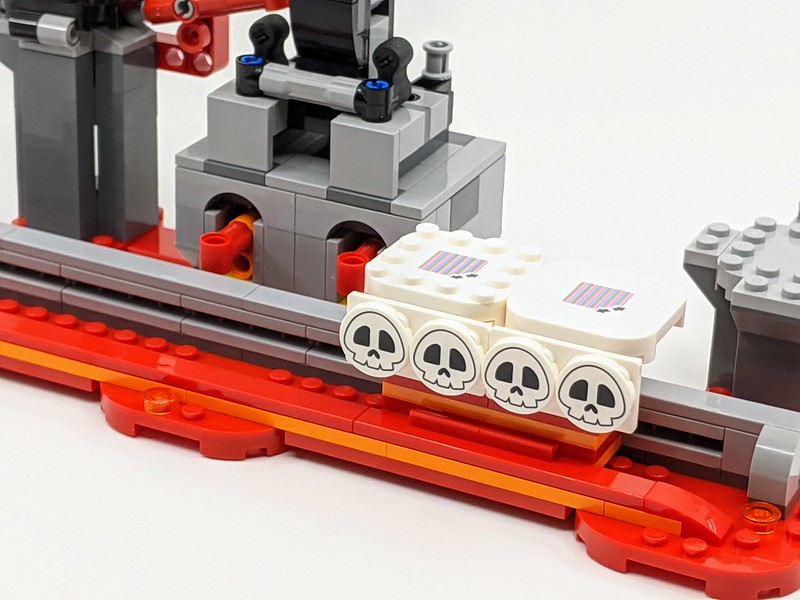 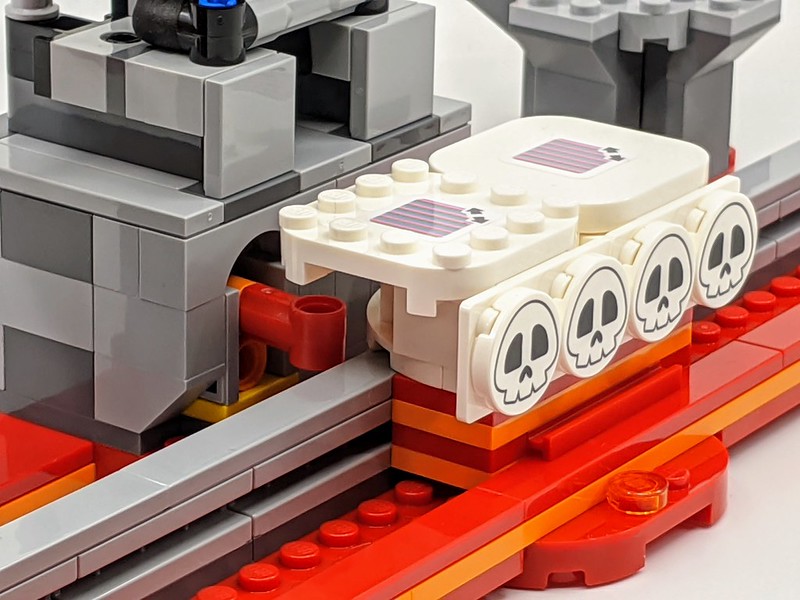 The platform is mounted to a rail, which allows it to be moved from side to side. This action is also incorporated into activating the Thwomp’s deadly drop. At the base of the central column, you’ll spot two red Technic angle pins. These are then connected to a hidden Technic beam, which in turn is used to hold a longer Technic cross axle rod, running inside the tower. At the top of this is a simple Technic ‘bush’ connector. With each pass of the platform, this causes that internal rod to shift from side to side. That Technic pin then snakes down a zig-zag chamber inside the Thwomp. Once it passes the third step, boom it’s pancake time. 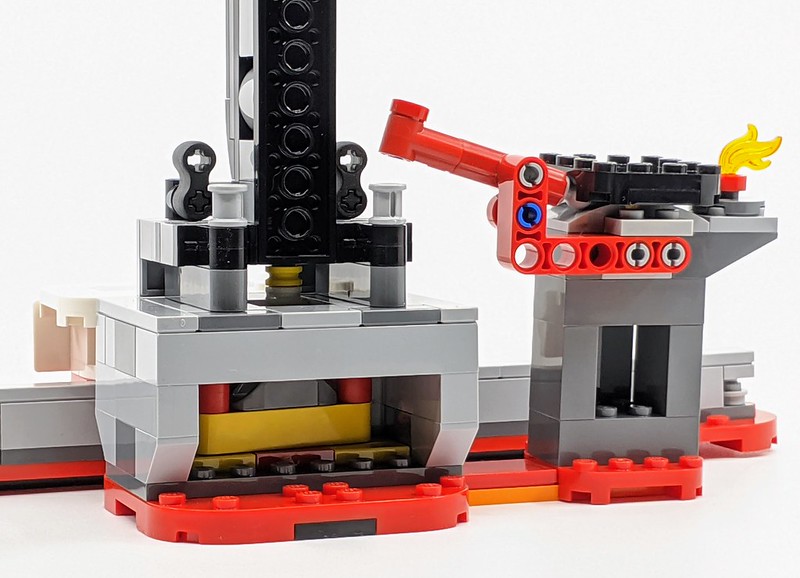 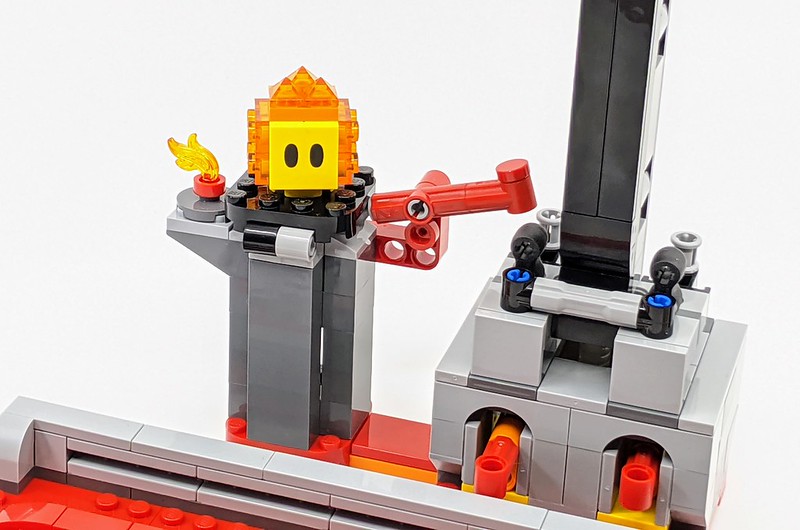 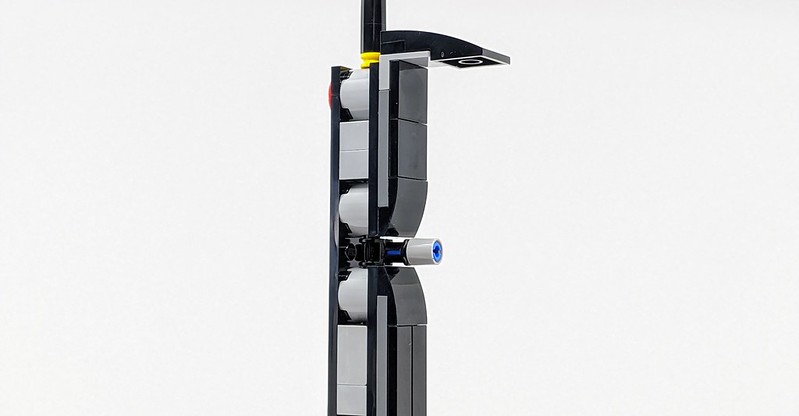 Should LEGO Mario be passing underneath, he’ll be thwomped into the ‘lava’. Manage to stay out the red stuff and you could be taken out by the flying Lava Bubble Sprite. A separate hinged platform to the left of the base of the tower is catapulted by the force of the Thwomp’s drop. The construction of the Thwomp is fairly involved. It doesn’t look like it from the outward appearance but inside is a stepped chamber. It certainly looks like the characters and appears to be based on the Super Mario Galaxy version. My only criticism here are the smooth sides. I think it would have been better with studded plates and more of the sloped bricks, which surround the ace printed face. 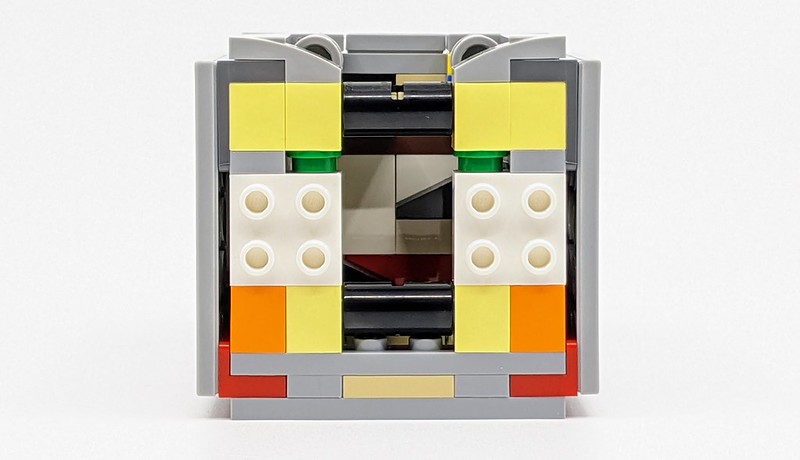 You’ll find five Action Bricks across the Thwomp Drop set. Each one the Lava Bubble Sprites have one as well as one on the top of the Thwomp, which can be accessed once it has dropped. These all give you coins for stomping on them. There are then two connection island plates on top of the skull lift platform. These both activate the crossing motion, where additional coins can be collected on each pass of the platform. 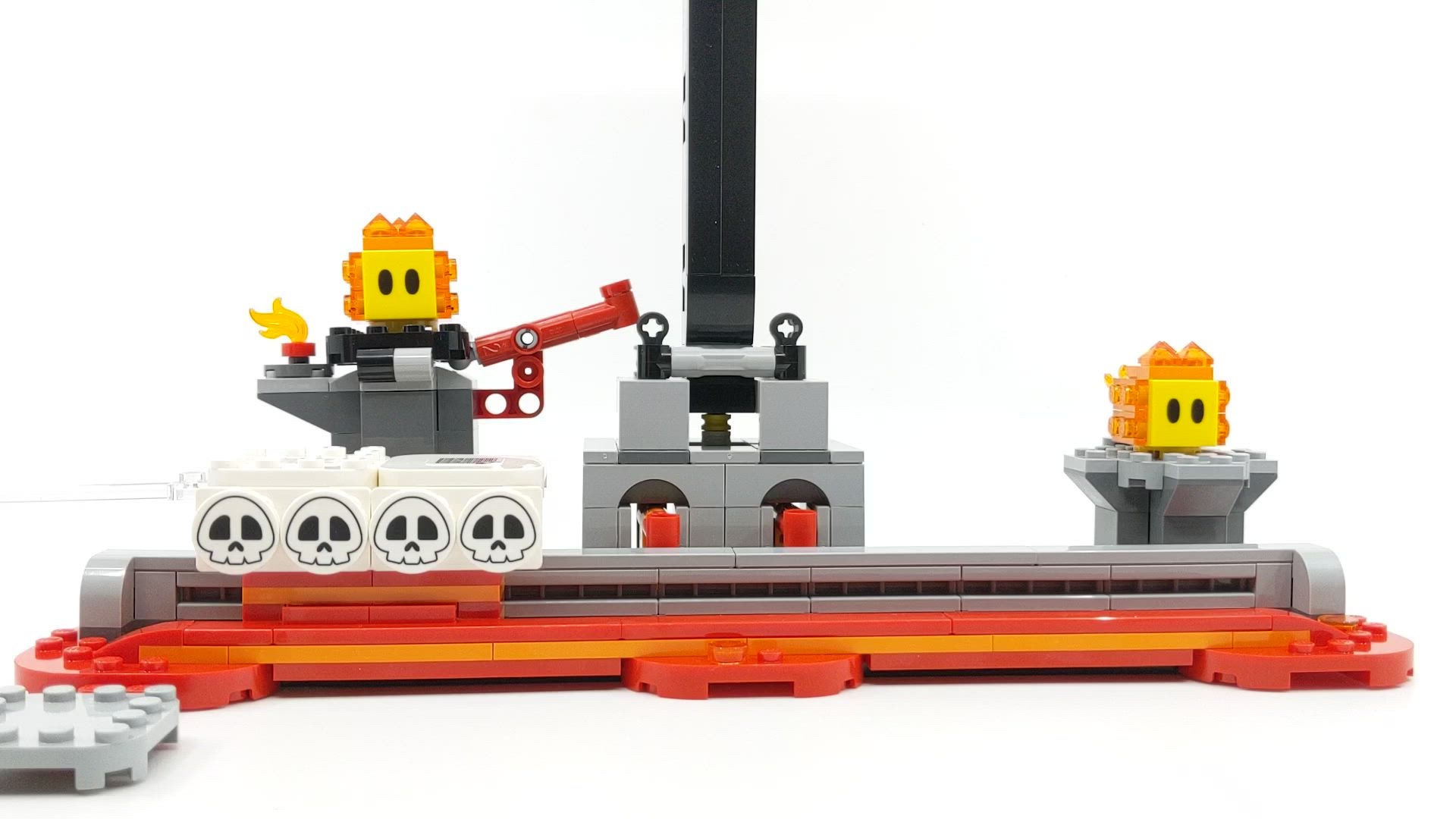 The mechanics of making the Thwomp Drop are quite clever, although I found if you don’t guide the Thwomp up correctly, it will drop on two passes of the skull raft platform instead of two. Which will see LEGO Mario topple quite easily. But you have to admire the way the edging of the platform’s movement slowly makes the Thwomp tumble to the ground. It may look like a simple grinning cube, but the innards combined with the tower rail is quite complex. I also love the simple action of the Thwomp’s drop flipping one of the raised platforms. Especially as it flings a Lava Bubble Sprite as it would in the games. On first appearances, the set looks fairly simplistic, but once you build it, you’ll appreciate how much has been poured into the set to ape the motions from the Mario games.