One minute you’re happily strolling through the Mushroom Kingdom and the next thing you know, a giant angry-looking bullet is barreling towards you. The Bullet Bill squadron have been on Mario’s back since 1985 and over the years they have evolved the ability to home in on our plucky plumber as well as blasting round the tracks of Mario Kart. These monstrous munitions are one of many iconic elements from the Mario games to be recreated in the new LEGO® Super Mario theme. But first a word on the set’s official title. As you will see it’s dubbed Boomer Bill Barrage, instead of Bullet Bill. I can only assume that as the set is aimed towards younger builders, the word bullet is a little too threatening. The same sort of thing happened with the Suicide Squad DLC for the LEGO Batman game. But here, in all honesty, it feels a little bit of a silly change. However, it’s the set we are here to check out in detail, not the odd naming choice. So let’s take a peek at the Boomer (Bullet) Bill Barrage Expansion Set. 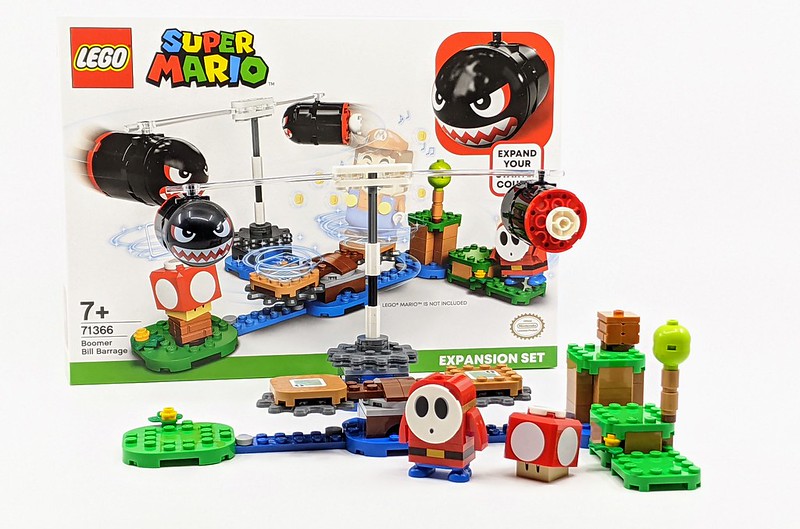 LEGO® Super Mario™ fans can take on a fast-spinning challenge with this Boomer Bill Barrage Expansion Set (71366). A great gift for kids to add to their LEGO Super Mario Starter Course (71360), this collectible toy playset features a spinner with 2 ‘flying’ Boomer Bill figures and a rotating platform with 2 difficulty levels (with or without studs). An enemy Shy Guy figure and a Super Mushroom boost the gameplay options. 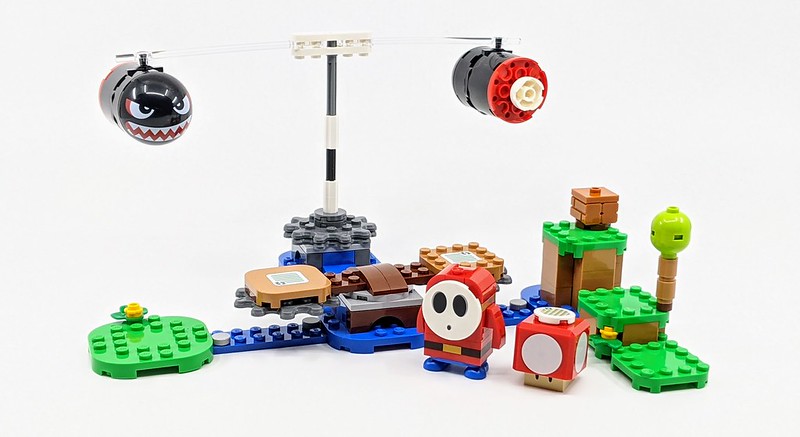 The focus of this set is the bullet-shaped, bullet commonly known as Bullet Bill, which, in a bullet-like motion, moves through the air, often directly towards Mario. Over the years Bullet Bill has gone from merely shooting out of his canon lair to become a homing missile. Whichever way he moves, Bullet Bill’s appearance has remained fairly similar. The two here feature a menacing printed face, they are just missing the arms. Both Bills are mounted on a couple of transparent rods, which are connected to a central column, mounted on a pair of splat gears. This whole mechanism can be twisted by the rotating platforms crossing the watery plates. 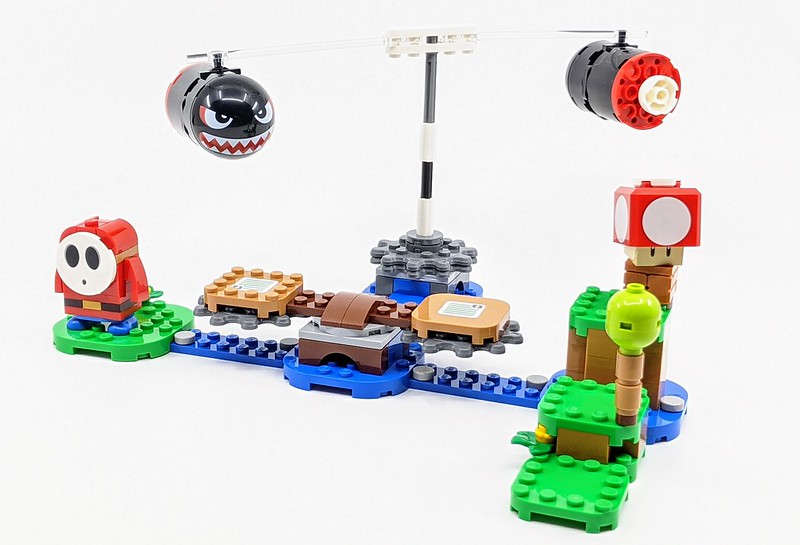 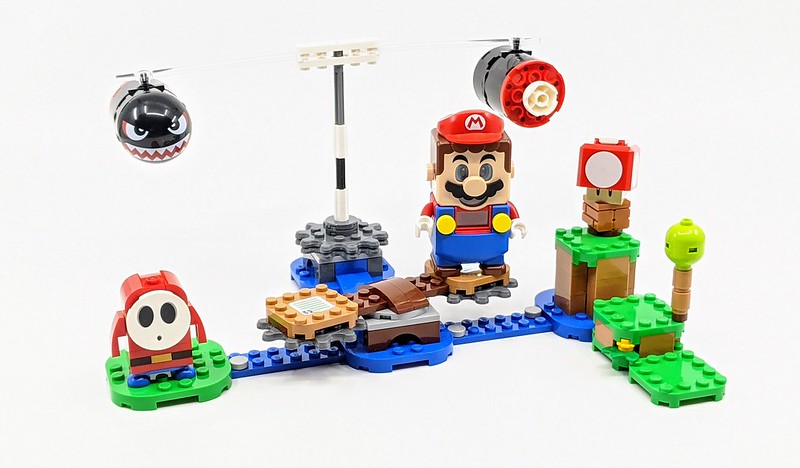 You’ll notice that the two platforms both feature splat gears and Action Bricks, but one is studded and the other isn’t. This provides two levels of difficulty. So placing LEGO Mario on either one activates that all too familiar danger jingle. Turning the platform will cause the platform splat gears to make contact with the central column, thus spinning the two Bullet Bills around. Depending on where you leave the Bullet Bills, they will either just pass by LEGO Mario as the platform is turned or they will send him to a soggy doom. It’s a fun way to recreate the motion from the games but can be frustrating to make sure LEGO Mario can safely get across. 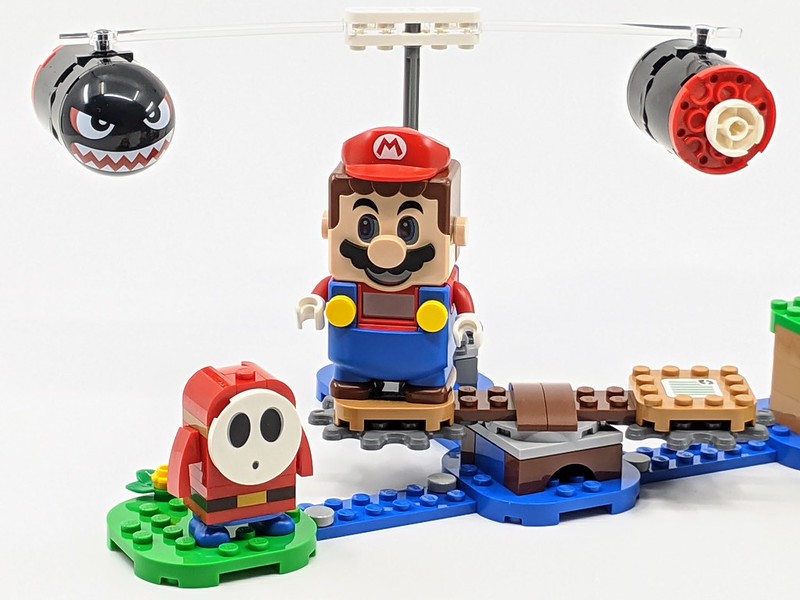 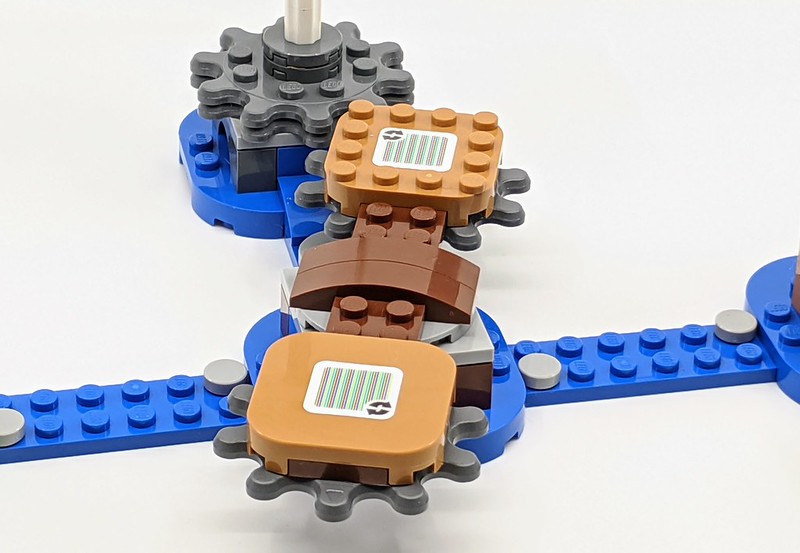 If he does, he will be greeted by a cute Super Mushroom, which has a cool new piece to represent the red and white dome. This is mounted on a hinged plate, so it sits at a jaunty angle on top of a 2×2 brick, which makes it look so much cooler. There is also a great little Shy Guy character. As will most of the brick-built characters in the LEGO Super Mario sets, this perfectly captures the appearance of the mysterious mask-wearing munchkins. Who first appeared in the second Super Mario Bros. game, which didn’t begin life as a Mario game. However, they are more commonly found in spin-off titles compared to main Mario games.

There are four Action Bricks included in the set, one on each of the rotating platforms, one on the back of the Shy Guy and one on top of the Super Mushroom. Both of the character ones are mounted on round tiles instead of 2×2 square tiles. All these Action Bricks offer up the ability to gain additional coins as opposed to any power-ups. 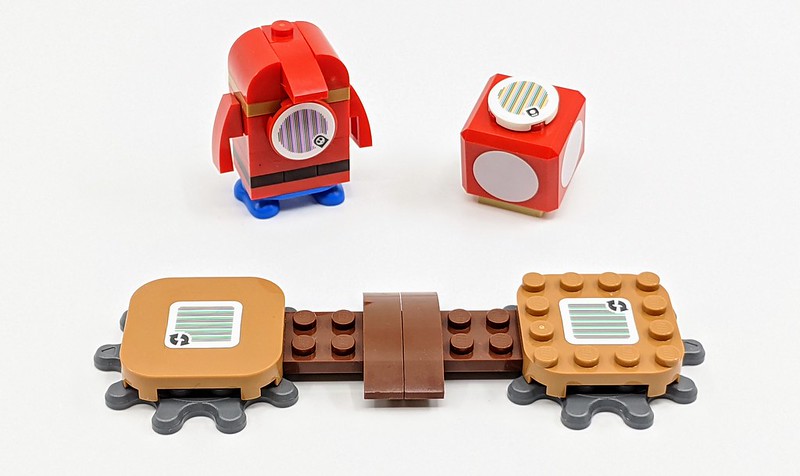 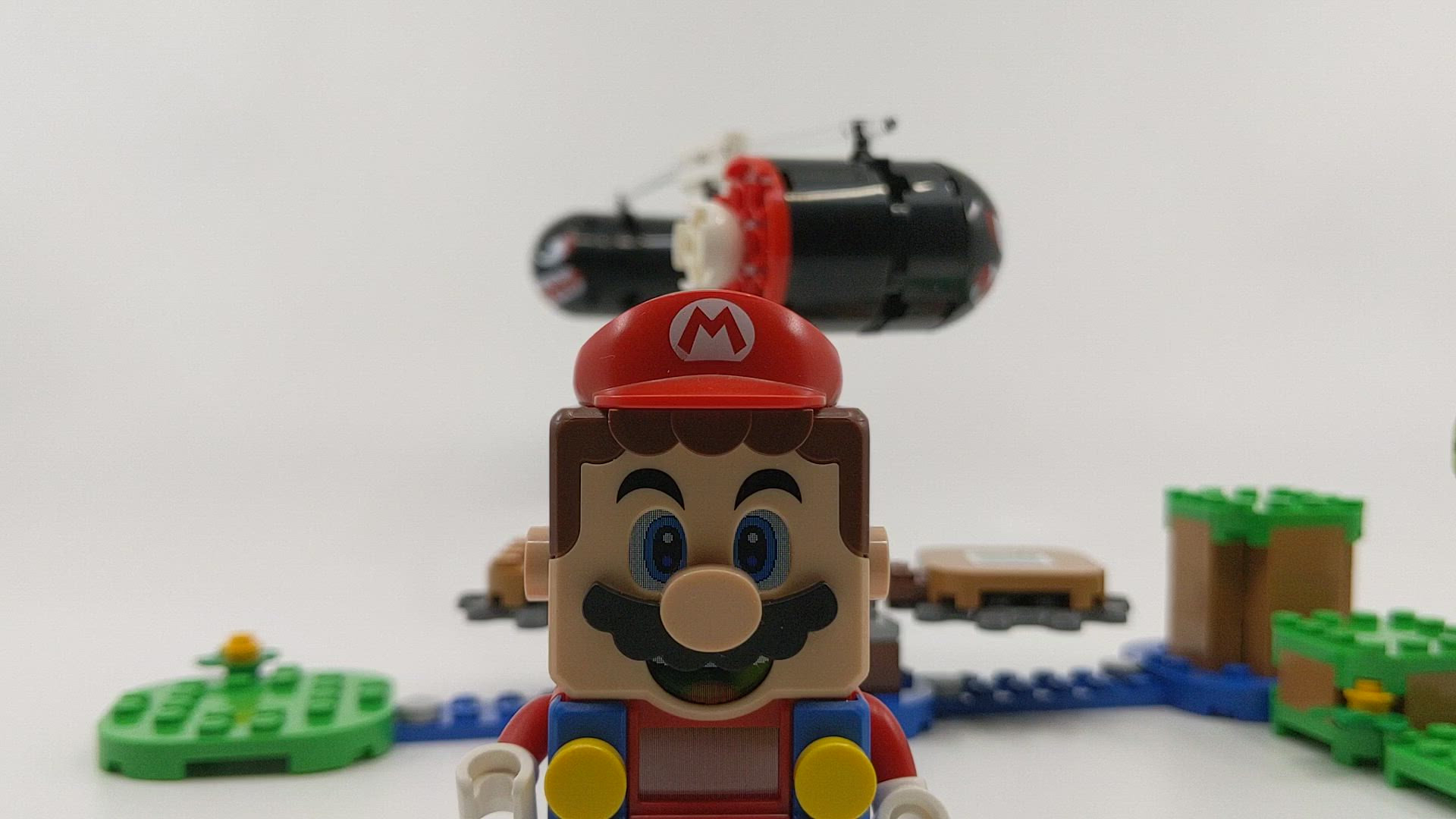 The clumsy renaming of a character aside, the set does a great job of replicating the motion of the Bullet Bills. It was tricky to decide where to place them in order to give LEGO Mario at least a chance to make it to the other side intact. The movement created by the splat gears means that depending on how forceful you are when spinning the central platform, will dictate the speed of the Bullet Bills rotation. I have to say the little Super Shroom is my favourite part of the entire build, so simple but so cool looking. The Shy Guy is also expertly done and matches, not only the style of LEGO Mario but the games as well. There are certainly better expansion sets than this one, but the various unique enemies make it a decent set to own should you wish to have all the iconic characters and enemies. Please note LEGO Mario is not included with this set.