Across the Mushroom Kingdom, Green Pipes are a common sight, not only do they act as ways to warp to new areas, some hide a deadly secret. The Piranha Plant has been popping out of pipes since the mid-80s, they were some of the first foes Mario faced, along with the Koopa Troopas. Both of which can be found in the Piranha Plant Power Slide set. This was one of the first sets to be revealed in the LEGO Super Mario range. It also offers a unique play feature and a much needed Time Block. But what does it bring to the table in terms of building and being integrated into a wider LEGO Super Mario course? So let’s take a closer look at the Piranha Plant Power Slide Expansion Set. 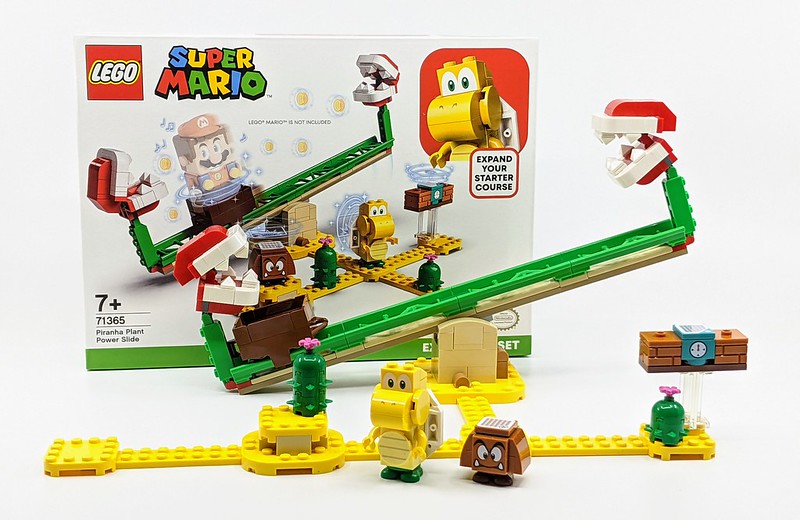 Fans can add a Piranha Plant Power Slide challenge to their LEGO® Super Mario™ universe and train to be better at collecting coins with this fun Expansion Set (71365). This collectible toy playset features a platform on rails on a seesaw with Piranha Plants at either end, a Time Block to earn extra time on the course for LEGO® Mario™ (figure not included), plus Goomba and Koopa Troopa figures to defeat. A great gift for kids, this building toy combines with the Adventures with Mario Starter Course (71360), which has the LEGO Mario figure and can be rearranged for fresh gameplay options. 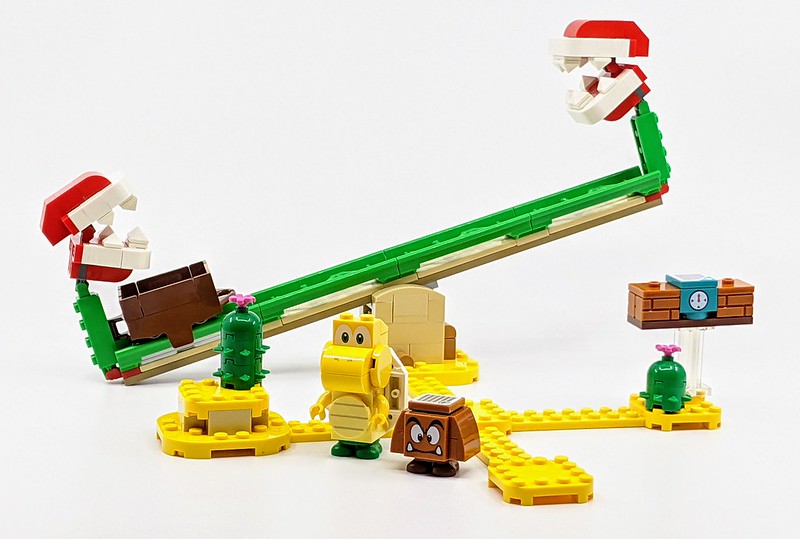 The build has a desert vibe to it, with yellow ‘sand’ plates and a cactus or two. But the main focus is a seesaw. This has been created with a strip of green roller coaster tracks. At each end is a Piranha Plant, these look great in LEGO form and perfectly capture their iconic appearance. Upon the coaster track is a roller coaster carriage, which Mario can be placed in for a usual back and forth caper. 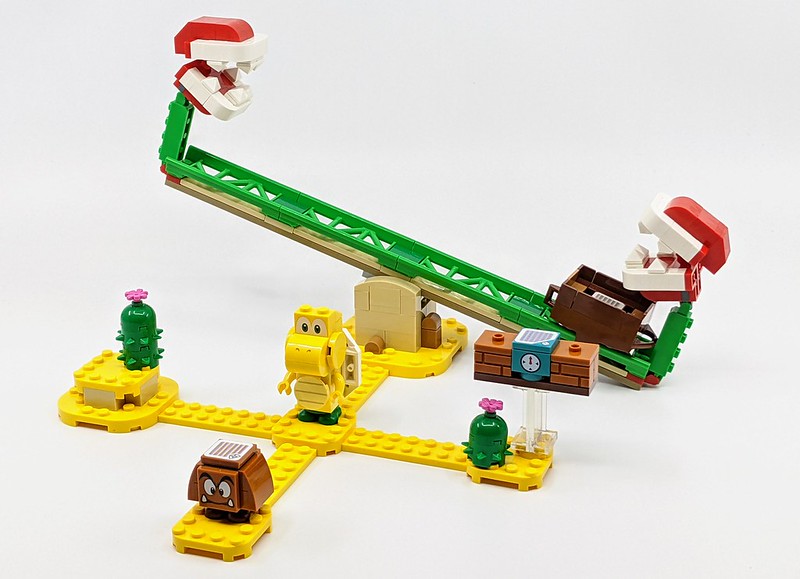 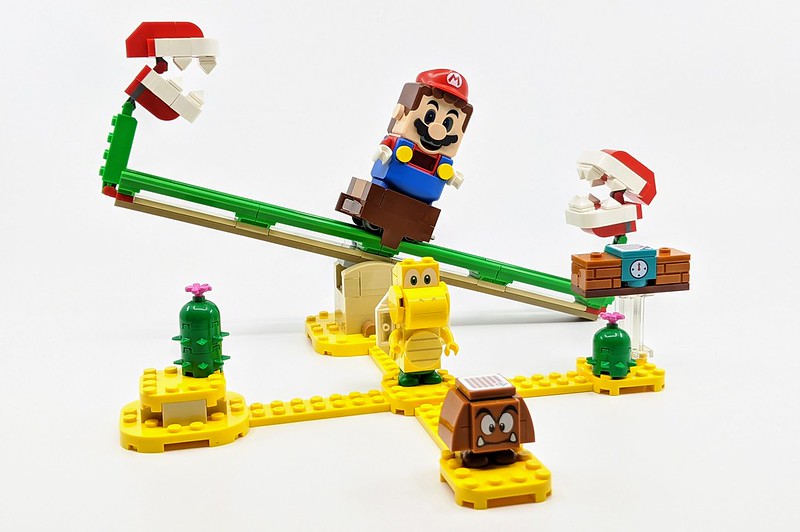 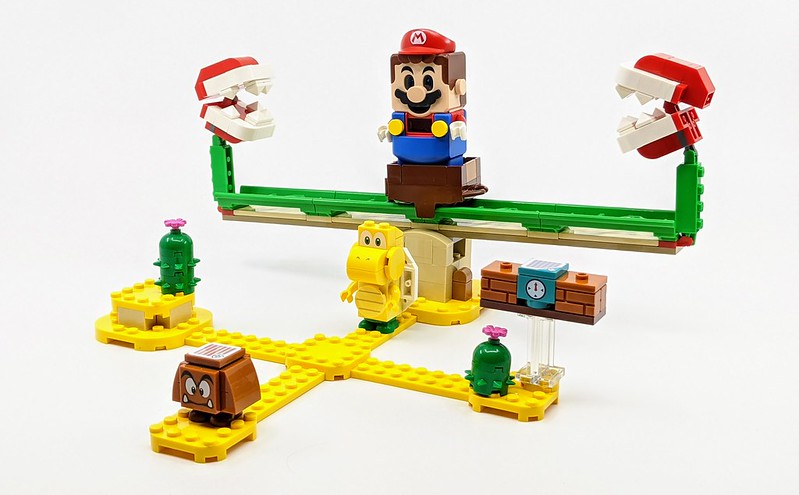 When I was building it and then paying with the seesaw element, I thought it was an odd motion to include as it doesn’t really appear in the Mario games. But then trying to keep away from the Piranha Plants by balancing Mario on the moving carriage, does feel a little like the game. Just having a Piranha Plant sitting in a green pipe would have looked better but would have lacked the same sort of interactivity. 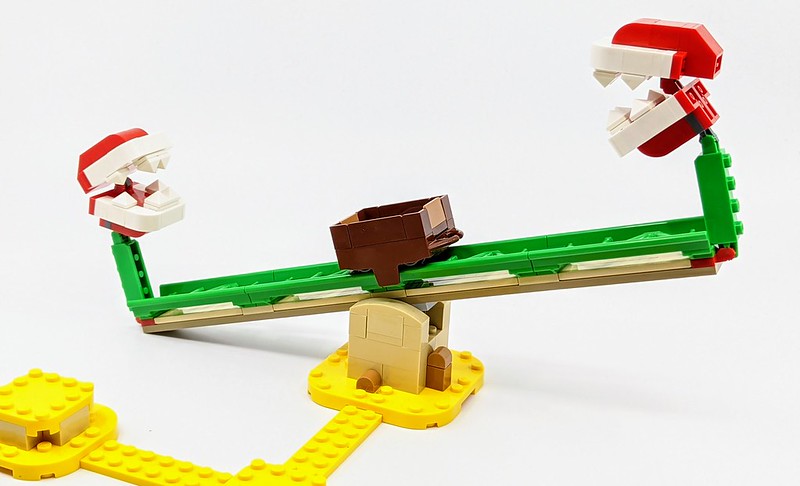 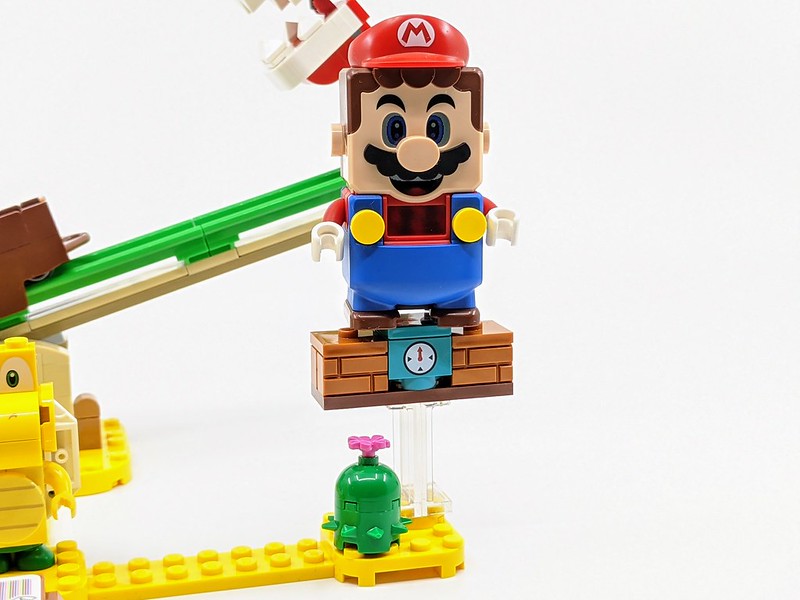 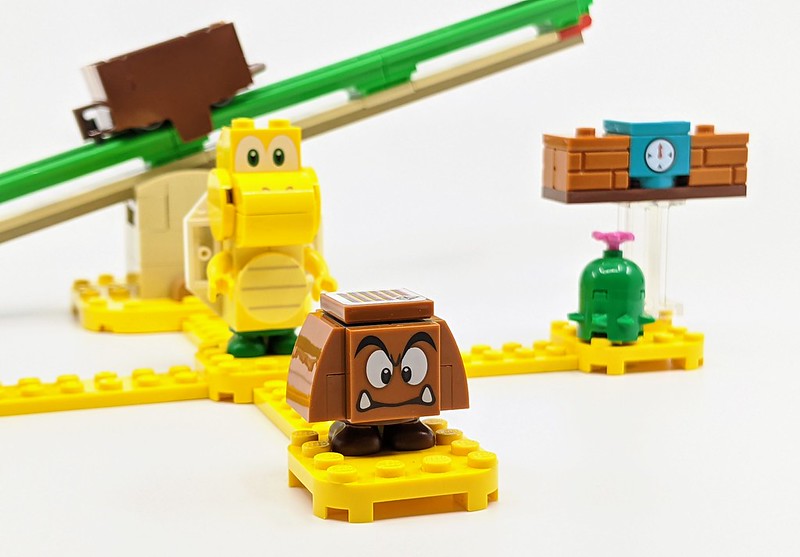 Along with the seesaw is a few branching paths. One leads to a Goomba, the other a Koopa Troopa and the last to a trio of blocks, one of which includes a rather useful Timer Block. The mushroom-shaped Goomba is a single build but looks just like the in-game enemy and the Koopa Troopa does feel a little chunky but you can tell what it’s meant to be. I like the new shell element has it acts to the iconic look of the character. 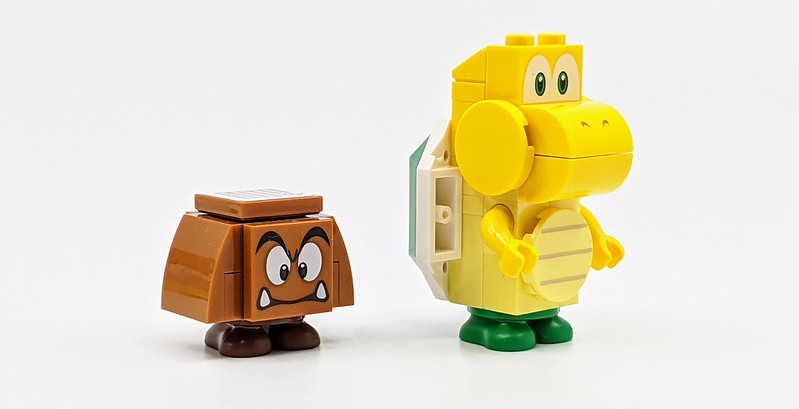 As with all the LEGO Super Mario sets, the key interactive elements are the scannable Action Bricks. These are recognised by LEGO Mario and trigger various actions. This set includes four Action Bricks, one atop the Goomba and on the shell of the Koopa Troopa. Then the Timer Block, which adds 30 seconds to LEGO Mario’s standard 60 seconds. It’s a useful Action Brick to have, especially if you want to create a fairly elaborate course. The final Action Brick is found within the carriage on the seesaw. This activates a perilous jingle and if you slide LEGO Mario from side to side, he can pick-up some bonus coins. However, it can also register if you hit either of the Piranha Plants. So you have to be careful when balancing LEGO Mario. 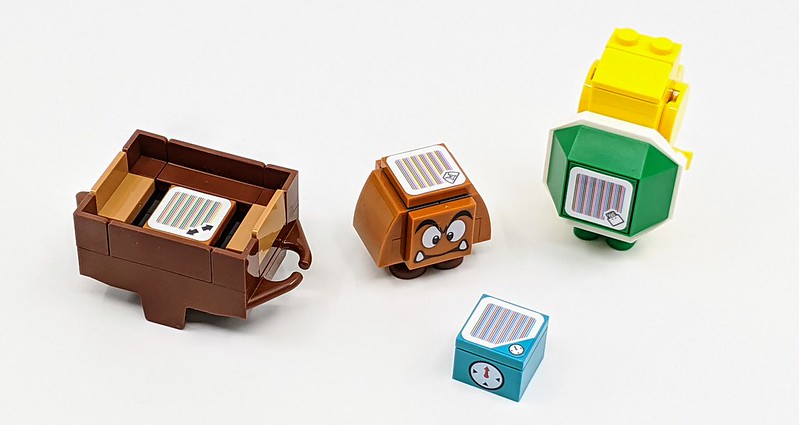 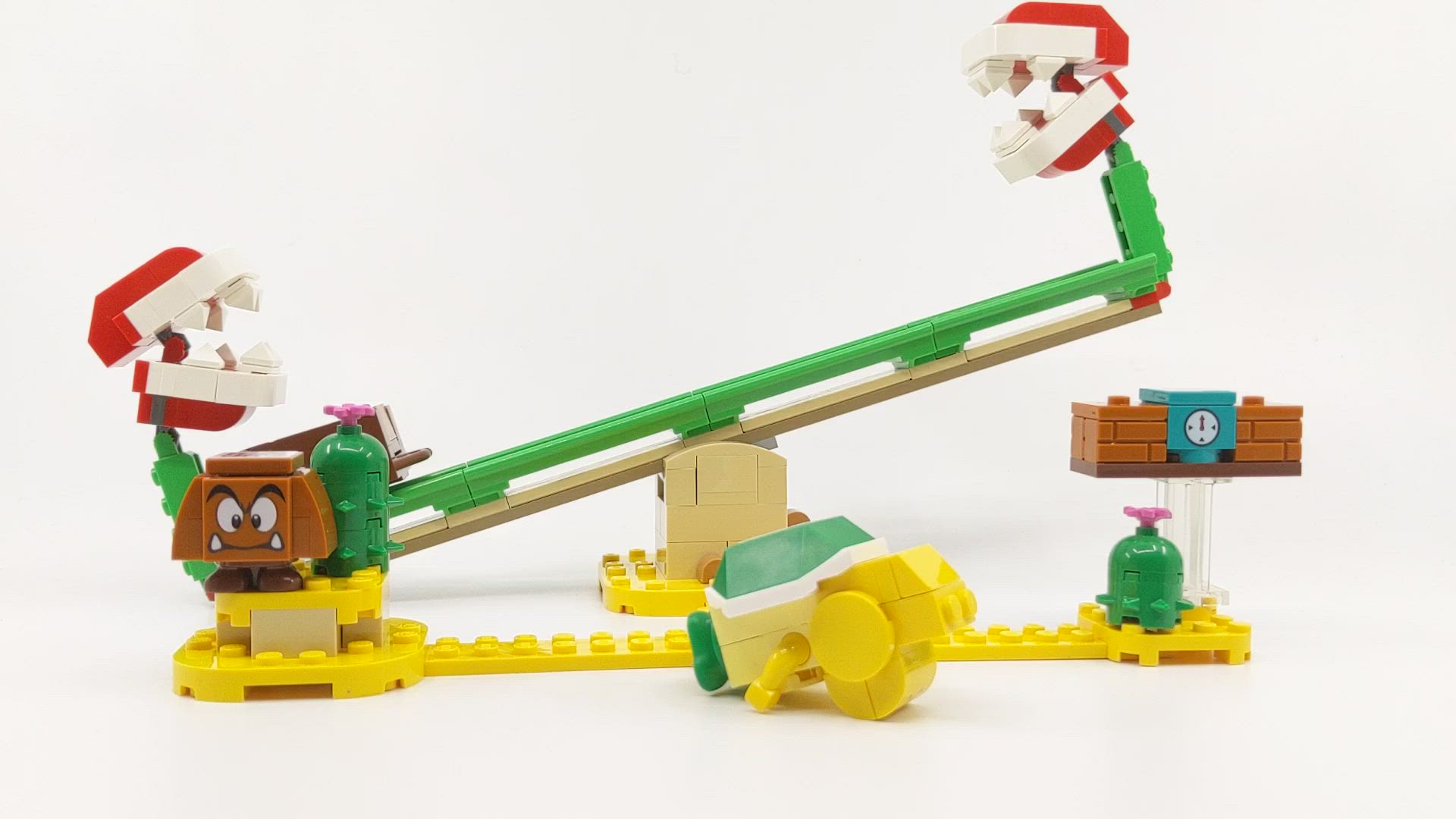 As mentioned above the concept of a Piranha Plant flanked seesaw, visually doesn’t feel much like a Mario game. To be fair the seesaw motion doesn’t either. However, the tricky notion of dodging these monstrous plants is very much an aspect of Mario gameplay. If you’re looking for a set which has a fair few Mario icons, then this has that covered. You can’t get much more Mario than a Goomba, Koopa Troopa and a pair of Piranhas Plants. Please note LEGO Mario is not included with this set. 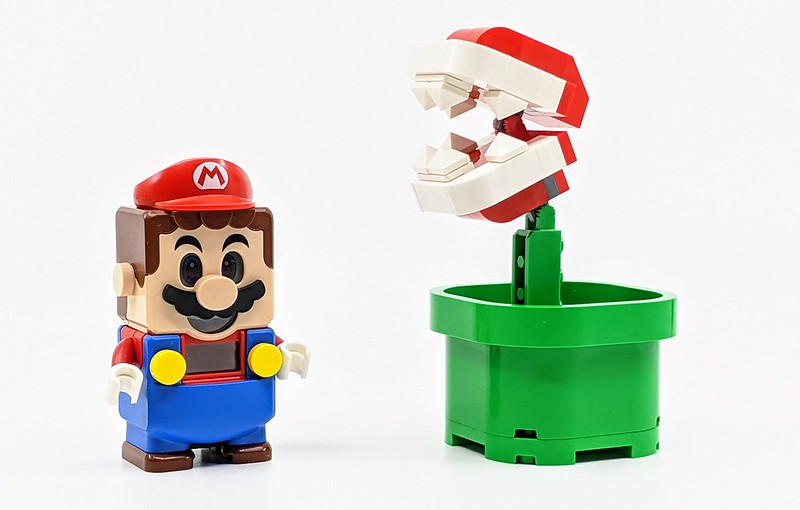