The worlds around the Mushroom Kingdom are filled with treacherous lands and imposing enemies, none more so than the lava-filled realms often found near Bowser’s hideouts. Be it speeding over them in karts or perilously hopping over them to rescue the princess, these lava rivers have been an iconic part of the Mario series ever since Super Mario Bros. was released in 1985. Whomps have a shorter history, but they are just as deadly. These imposing paving slabs first appeared in the genre-defining 3D platformer, Super Mario 64. Now both have been combined for another LEGO® Super Mario Expansion Pack. The set features numerous Action Bricks, a mighty Whomp and some lava-like LEGO plates to add to the Starter Course and give LEGO Mario a run for his money. So let’s continue the LEGO Super Mario set reviews with a look at Whomp’s Lava Trouble Expansion Set. 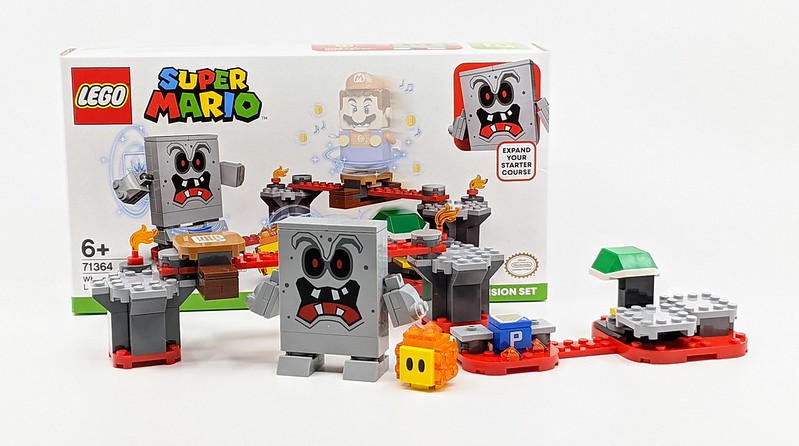 Heat up the competitive LEGO® Super Mario™ action with Whomp’s Lava Trouble Expansion Set (71364). This modular LEGO Super Mario playset features a sliding platform, Whomp figure guarding a P Switch (found only in this set!) and a brick-built, shell-shaped system to topple the Lava Bubble figure. It’s the ideal gift toy for kids who own the LEGO® Mario™ figure found in the Adventures with Mario Starter Course (71360).

The set is one of the smaller Expansion Packs to feature in the LEGO Super Mario range. Which means there is much to build, however despite the basic look, there are some fun things to interact with. Starting with a moving platform. An Action Brick emblazoned platform can be moved across a red plate bridge. Once safely across, an imposing Whomp stands guard over a P switch block and a Lava Bubble Sprite can be taken out with a unique Koopa Trooper shell. What it lacks in building, it certainly makes up for in interactivity. 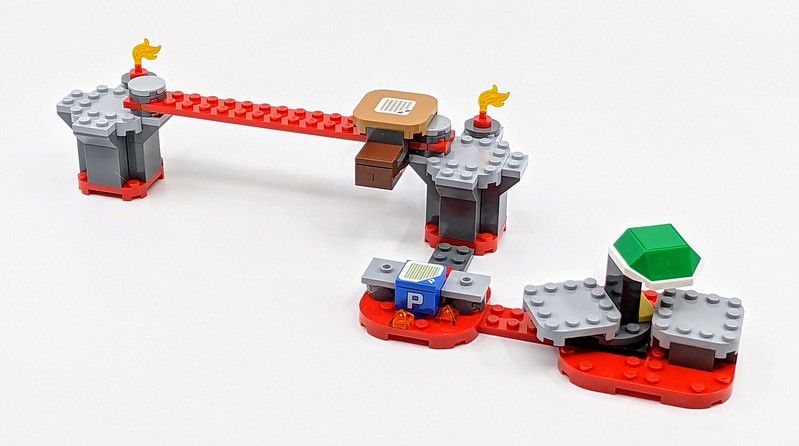 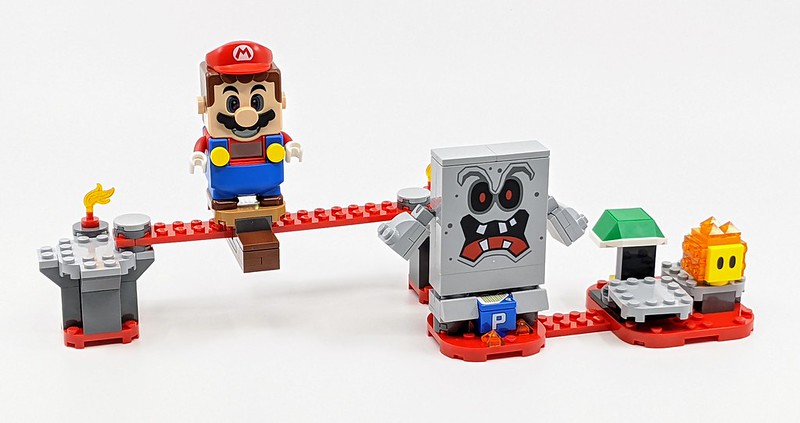 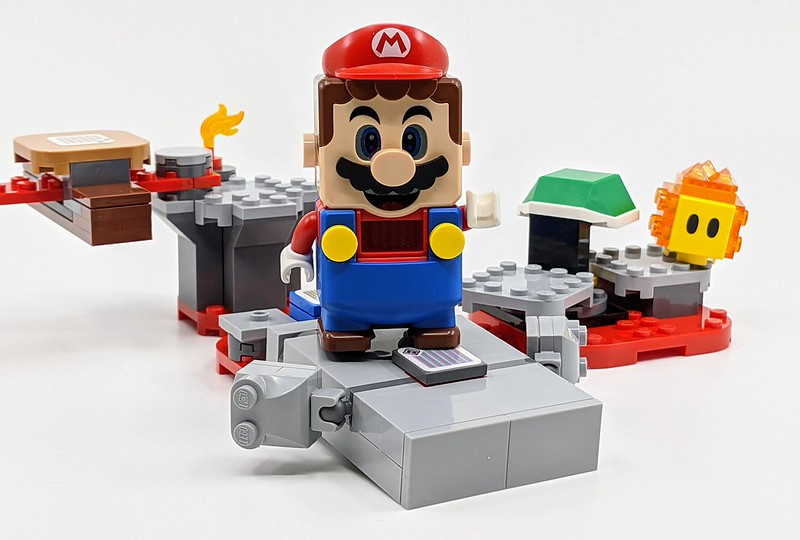 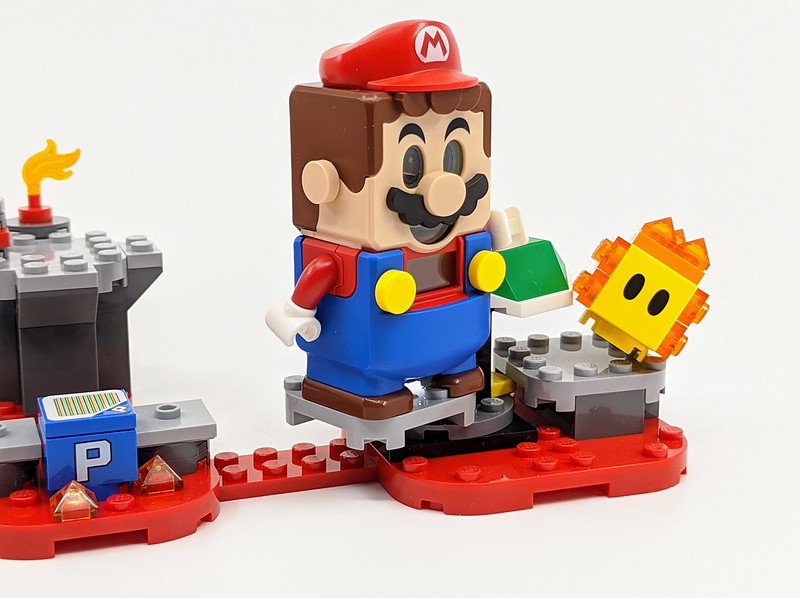 The Whomp has been expertly recreated in LEGO form and as with all LEGO Super Mario sets, that fearsome grimace is printed. On the Whomp’s back, you’ll find an Action Brick plate. Of all the Mushroom Kingdom enemies I built so far, this is my favourite. Another off-shoot area of the set features a unique shell element, mounted and a rotating section. Turning this can take out the Lava Bubble Spite, which also features an Action Brick plate. 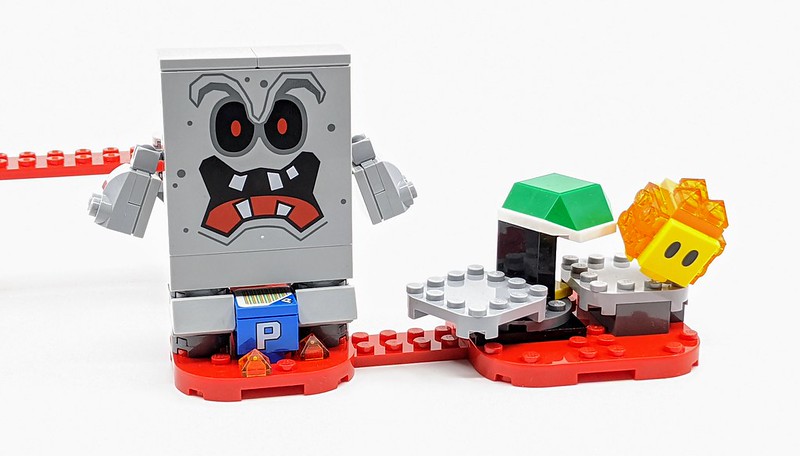 Despite being a smaller set, there are four different Action Bricks included. The one on the moving platform activates that familiar jingle, often played in lava-filled levels and allows LEGO Mario to collect a few bonus coins, should he safely make it across. Toppling the Whomp reveals another Action Brick, upon which LEGO Mario can ground pound to defeat it. Once he does, there is an Action Brick on top of a P switch, which ‘reveals’ some bonus coins to collect. And finally, there is one on the Lava Bubble Sprite, although Mario wouldn’t normally touch these. 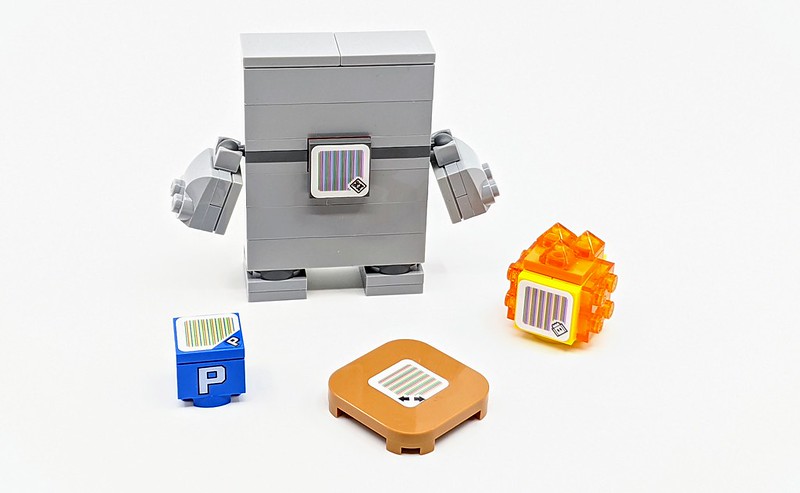 Lava plays a perilous role in almost all Mario adventures and that’s translated well with this set. The bridge platform looks stable enough, but without any studs to secure LEGO Mario, you have to take it easy when moving across. Just like you would in the game, timing it right before making the leap. Toppling the Whomp reveals an Action Brick and the option to take it out, with a stomp or two. Even twisting the shell around, kind of apes using them as projectiles. It’s little things like this which show a fun connection to the many games which has inspired the sets. Although there isn’t much substance with buildable elements, what is there provides a useful section to incorporate into a larger course and to be honest, it’s worth it just for the awesome Whomp character. Please note LEGO Mario is not included with this set.