As a long time Nintendo fan, I’ve embarked on numerous adventures with Mario and his extended band of friends. Many of the sets in the LEGO® Super Mario line have been inspired by Mario’s earliest outing, but you don’t realise just how many iconic Mushroom Kingdom characters began life in an entirely different game. For anyone has played Super Mario Bros. 2 you’ll notice it feels like a very different sort of game to other Mario titles. The Mario characters were inserted into another Japanese title known as Doki Doki Panic. Which would like fully introduce the desert environment to the Mushroom Kingdom. Within these sandy worlds resides a spikey foe known as the Pokey. For me, it conjures up memories of the Shifting Sands world from Super Mario 64. So without further ado, here’s a closer look at the Desert Pokey Expansion Set. 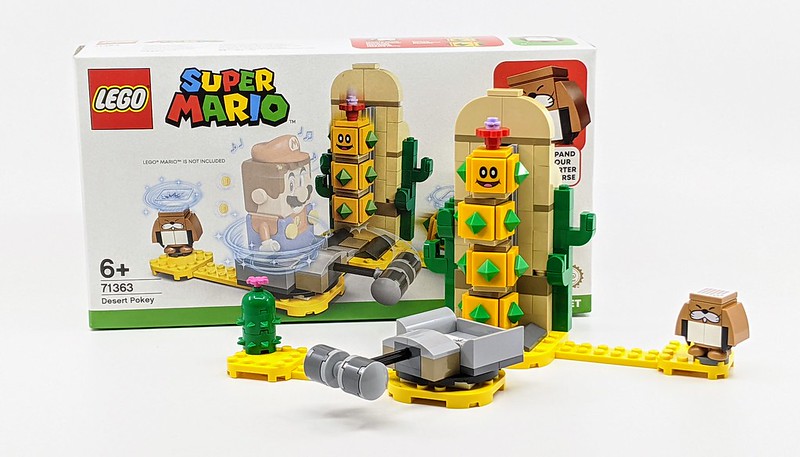 Fans can add an extra, fun challenge to their LEGO® Super Mario™ Starter Course with this hammer-swinging Desert Pokey Expansion Set (71363). A great gift for kids, it features a buildable desert scene, hammer turntable for LEGO® Mario™ to knock down his cactus-like enemy Pokey section by section, plus a Monty Mole figure to defeat and collect virtual coins. (Note: LEGO Mario figure is not included; find it in the Adventures with Mario Starter Course 71360.) 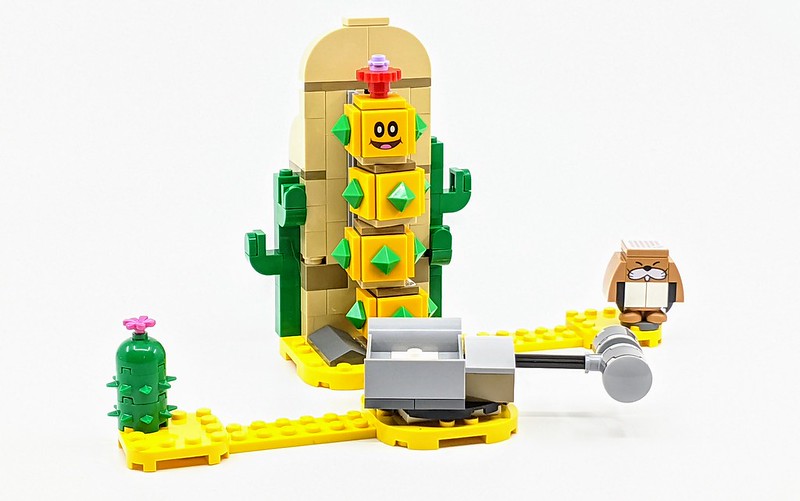 The Desert Pokey expansion is another of the smaller sets in the range but still manages to offer a unique play feature, not found in other sets. The Pokey enemy is a spikey, made up of multiple sections. In the realms of the games, they can often be defeated by taking out the sections, which has inspired this set. The Pokey is created with four separate sections, each built around a 2×2 cube. Each of these has a tail section with a 1×1 cone attached to it. These loosely slot into a channel, built into a small hill section, flagged by two cactus. 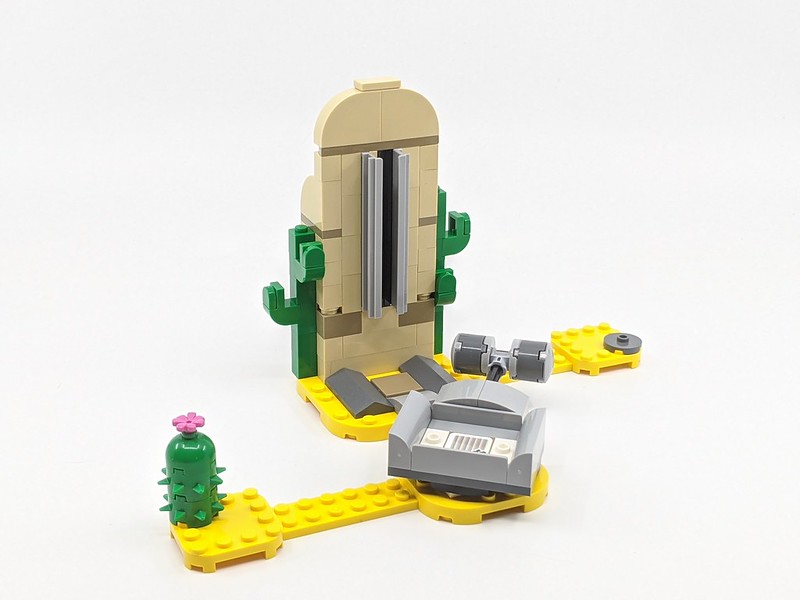 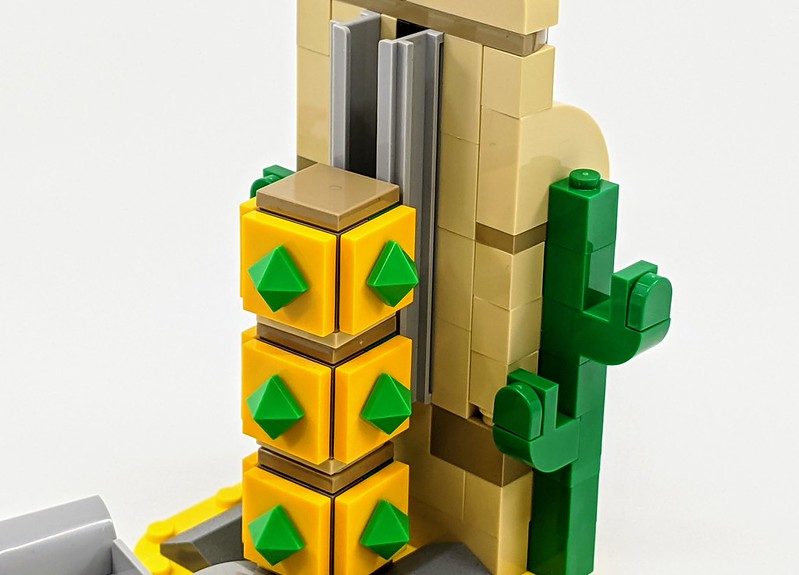 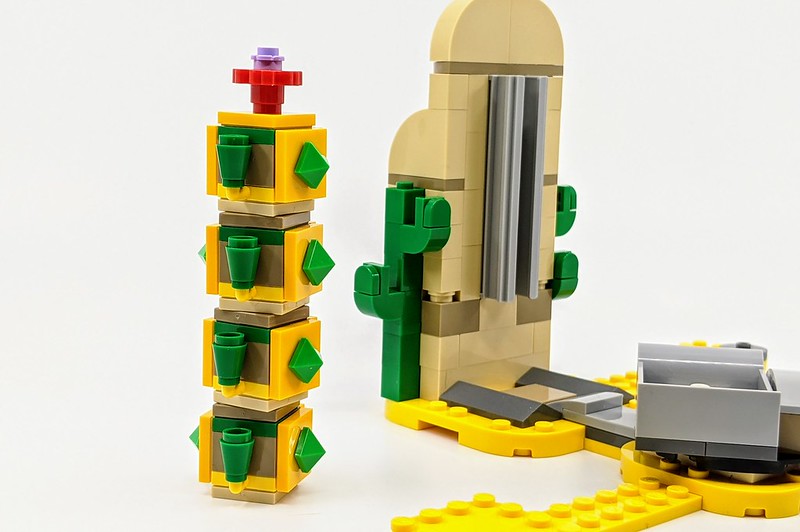 The bottom section has an Action Brick, but to get to it, you’ll need to take out the sections. To do this LEGO Mario must take control of a hammer. This is a small twistable contraption, with room for LEGO Mario to be placed in it. As it’s mounted on a turntable plate, twisting it around takes out a section of the Pokey. You can easily just stomp on the bottom section, which has the Action Brick, but you’ll lose out on a few bonus coins. It’s an interesting function and decent way to recreate the actions of the game. 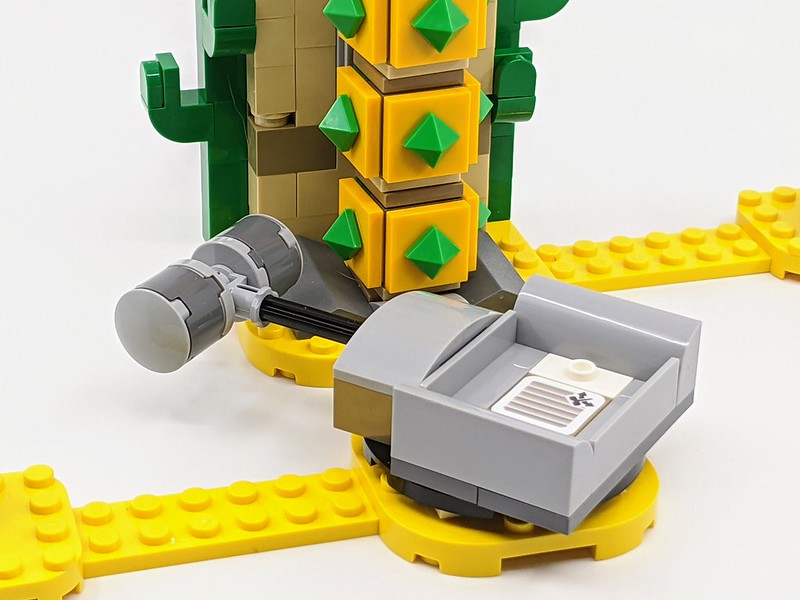 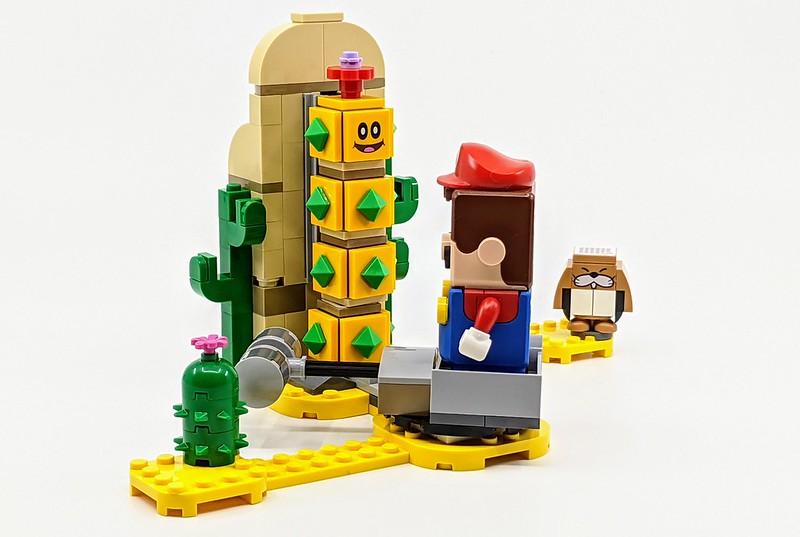 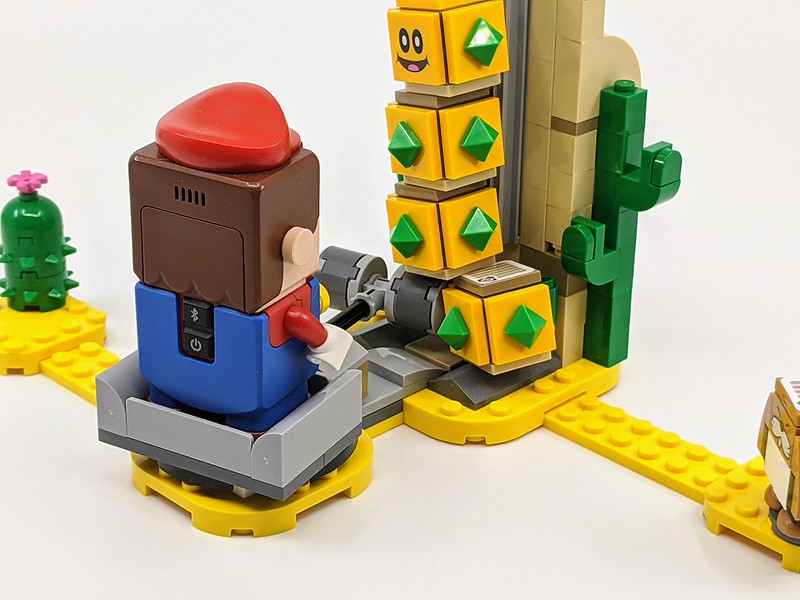 The desert vibe is expanded upon with a small cactus and there is also another enemy in the form of Monty Mole. These underground dwelling creatures didn’t appear until the SNES days, where they pop out from the ground. In this set, they merely house an Action Brick. 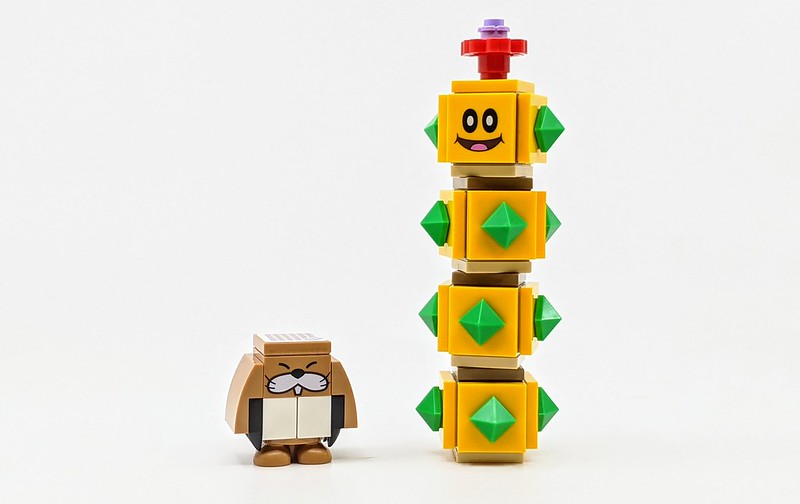 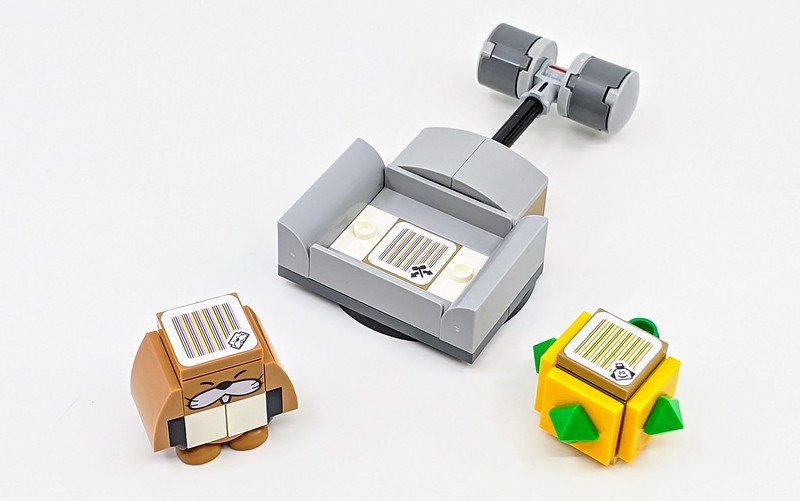 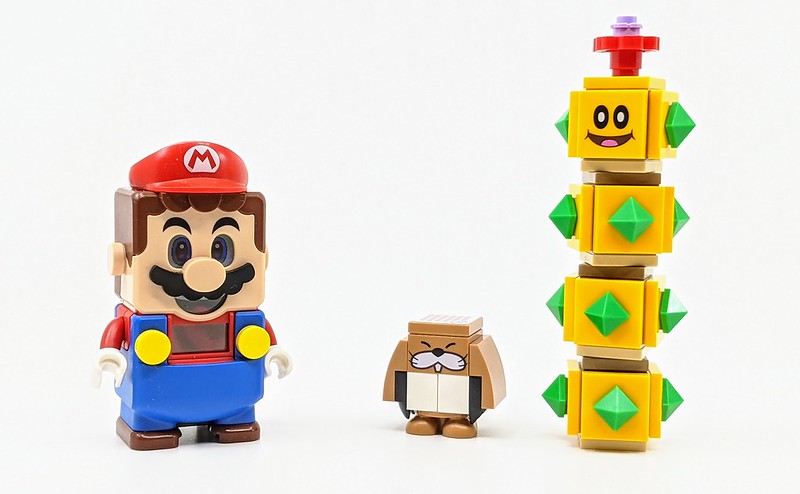 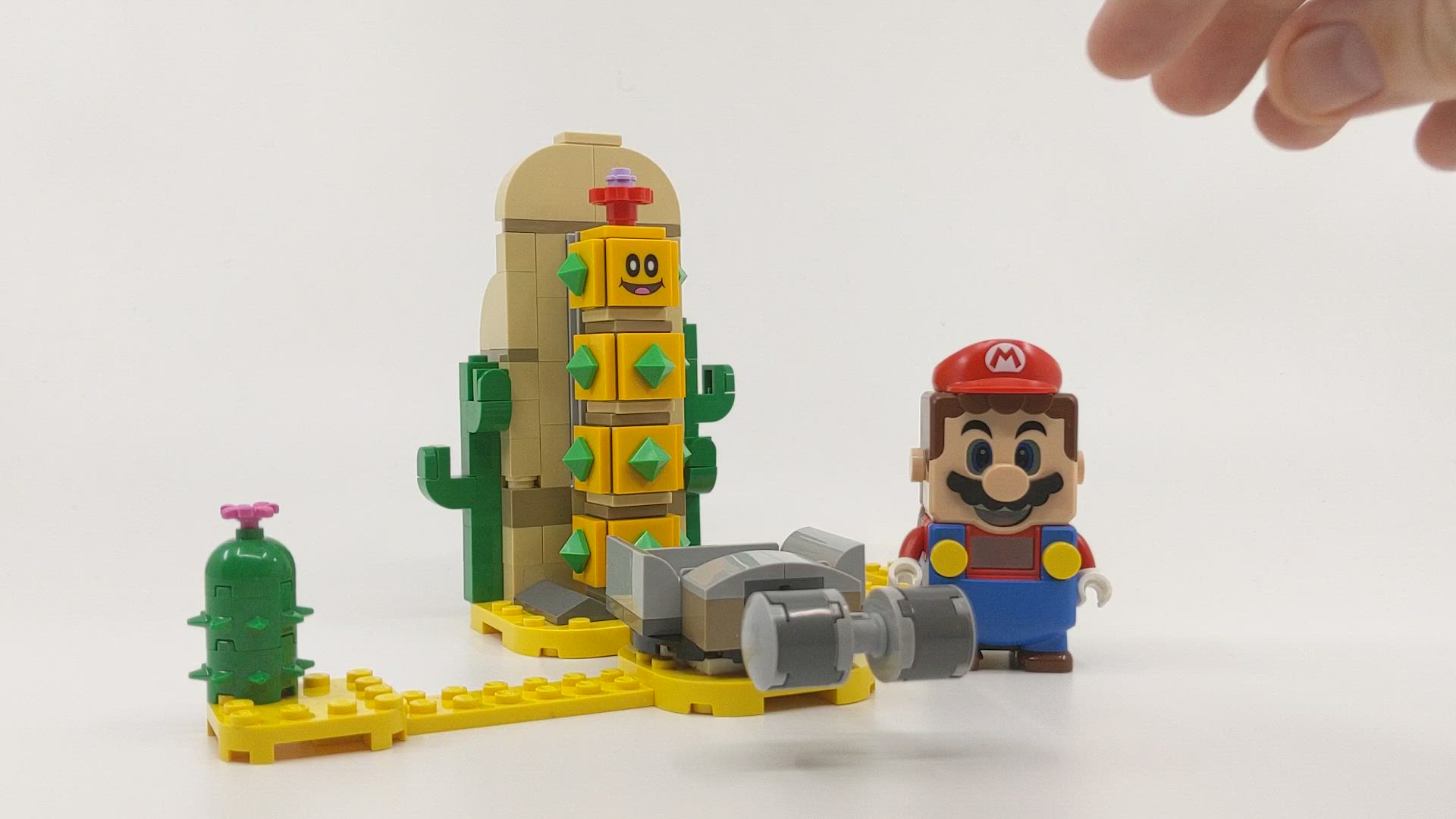 One of the things I like about the LEGO Super Mario sets has to be the unique ways they recreate elements from the game. Taking out the Pokey sections with a hammer infused platform may feel a little disconnected from how it occurs in the game. However, it’s still fun and unlike any of the play functions from any other sets. It’s also one of the only sets to feature the desert landscape, allowing you to bring a little variety to your courses and also a great partner for the Monty Mole GWP set. Please not LEGO Mario is not included with this set.