In the original Super Mario Bros. games, the goal was Bowser’s Castle but before reaching the ultimate goal, players would be greeted with various castle-like fortresses. But the path to these brick-built fortresses are fraught with danger and there could be multiple ways to get there. As with many of these LEGO® Super Mario sets, they are heavily influenced by the original 1985 Mario game. The Guarded Fortress is one of the larger expansion sets in the range and includes a couple of unique play features. It also has various biome surfaces and plenty of sections to easily slot into a larger course. Does the larger set result in a worthwhile addition to the range? Let’s-a-go and find out in my next LEGO Super Mario set review. 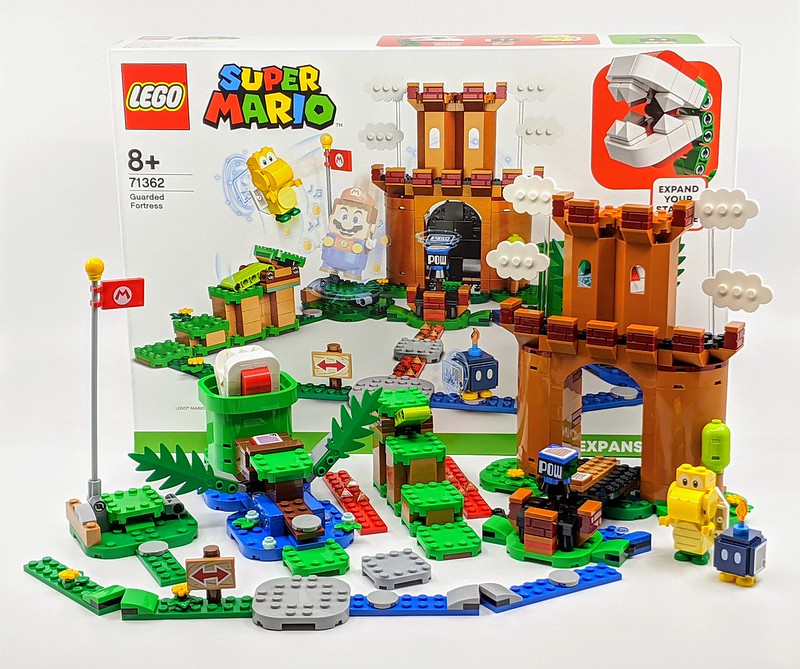 Kids choose their own route for LEGO® Mario™ to reach the Guarded Fortress with this fun-packed Expansion Set (71362). A fantastic gift for kids who own the LEGO® Super Mario™ Starter Course (71360), it features a buildable fortress, catapult, brick-built water and lava routes and POW Block, plus Bob-omb, Koopa Troopa and Piranha Plant toy figures for LEGO Mario to defeat. (Note: LEGO Mario figure is not included; find it in the Starter Course set.) 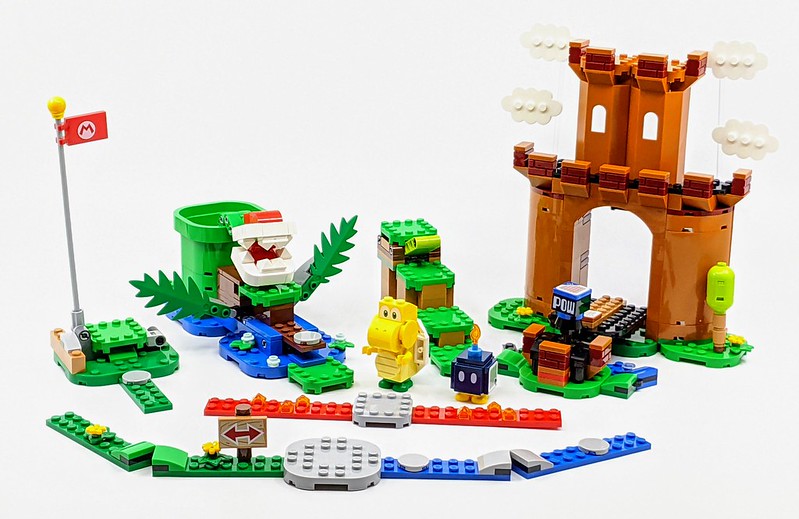 In the original Super Mario Bros. Game, Mario would head towards a small castle-like structure, which takes him to the next stage of the world. The Guarded Fortress set is inspired by this part of the game and also includes a couple of obstacles. The Fortress is the focal point and where you begin the build. It may look like a simple castle, which in essence is it, but there is a clever functional mechanism built into the foundations. A simple 2 stud wide strip sits in a channel and when the POW block is tapped it pushes this strip and lowers the door to the Fortress. It provides a nice and surprisingly satisfying play feature. 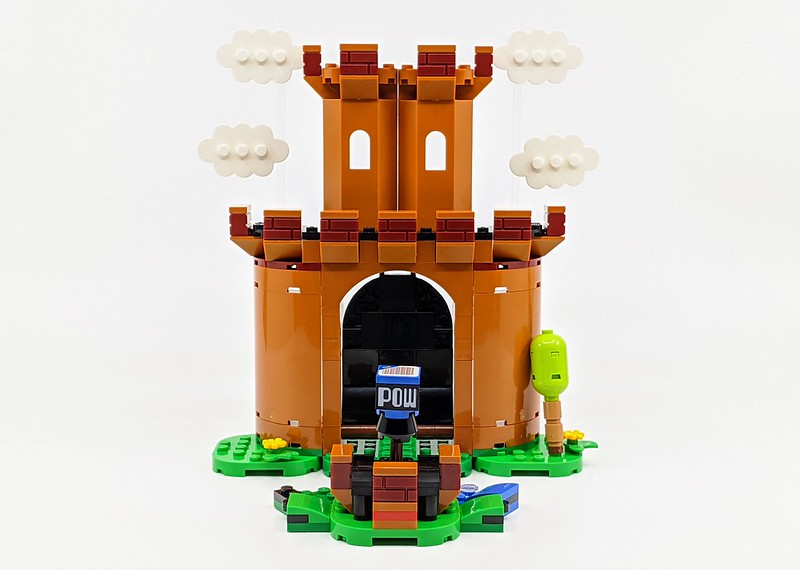 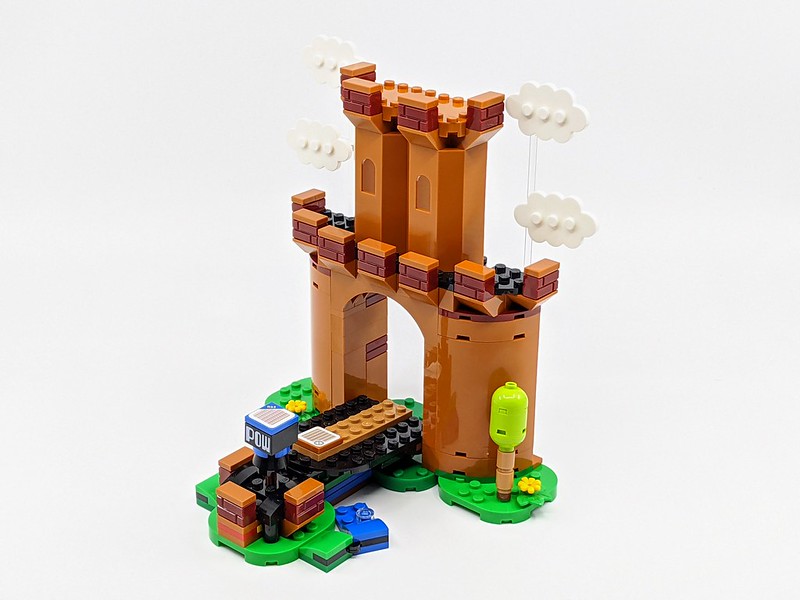 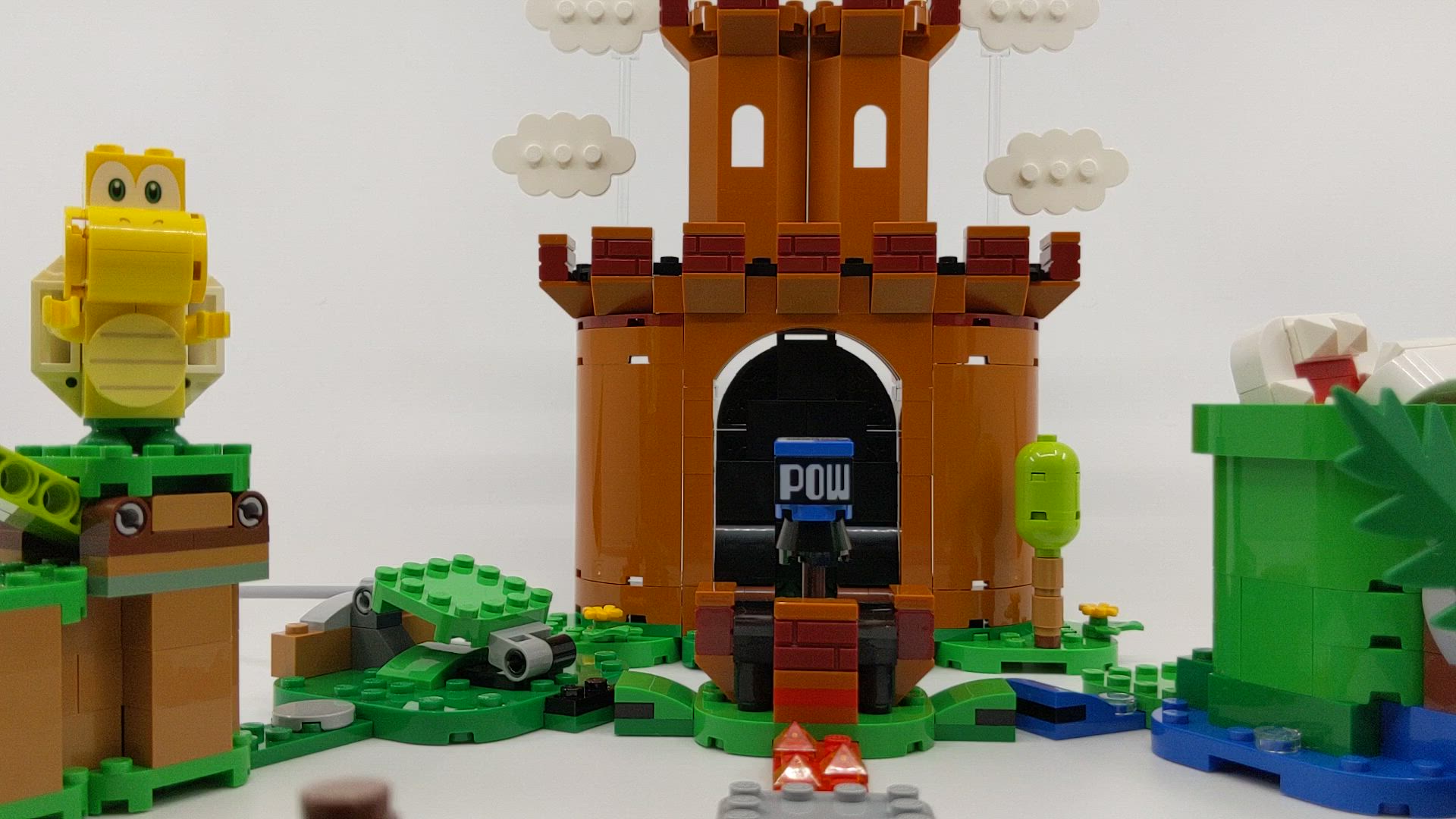 Before you reach the Guarded Fortress, there is one of three paths to choose. To the left is a grassy route, which features a trio of stepped hills, leading to a forth hill, which can be tipped by a lever and topples the Koopa Troopa goon. The central route may look easier, despite the bubbling lava and Bob-omb but it also means you pick up fewer coins. So you may want to take on the right-hand route. 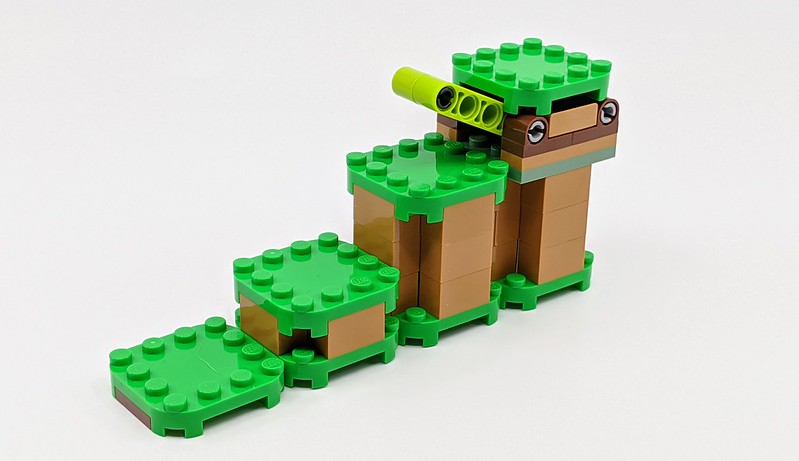 Here you’ll find a Piranha Plant and unlike the Power Slide set, this one dwells within a green pipe. There is an interesting play feature here, but only when it works. The Piranha Plant head is connected to a chain-link style strip of 2×1 Technic beams. This is anchored to the base and has enough slack to allow the Piranha Plant to drape over the side of the pipe and rest on a platform. Similar to the catapulting platform on the other side, LEGO Mario can slam down and send the Piranha Plant back into its lair. However, it’s not always a sure-fire thing. You’ll find that the action doesn’t always recall the plant back into the pipe. Despite that, it does look good and is a better representation of the classic enemy than in other sets. 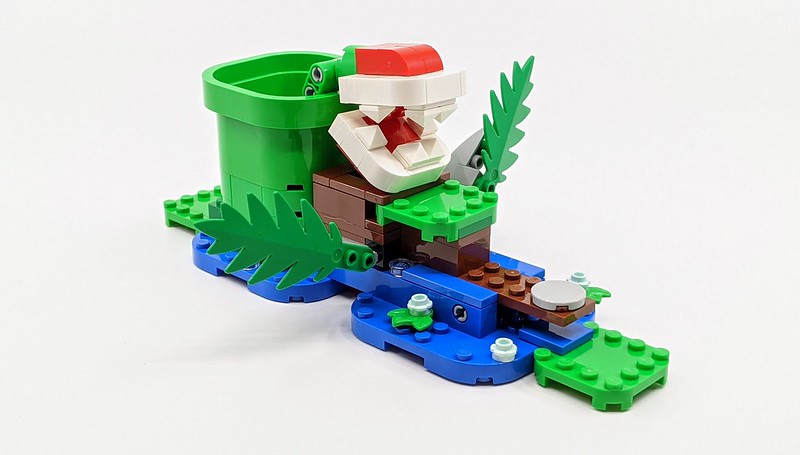 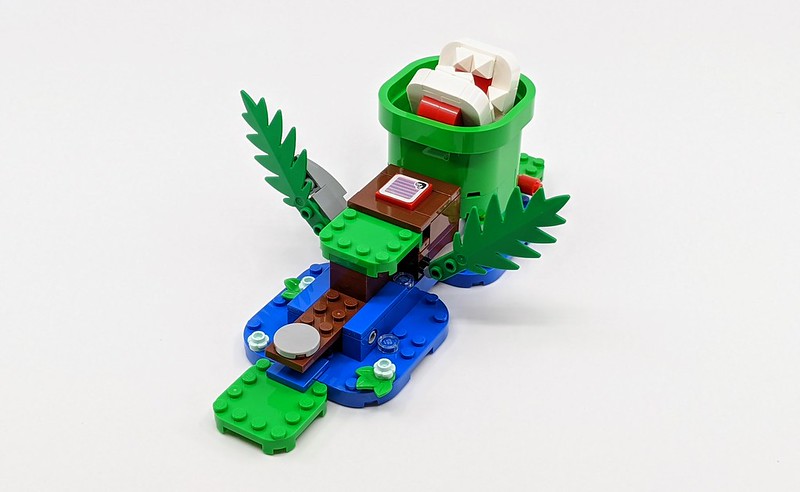 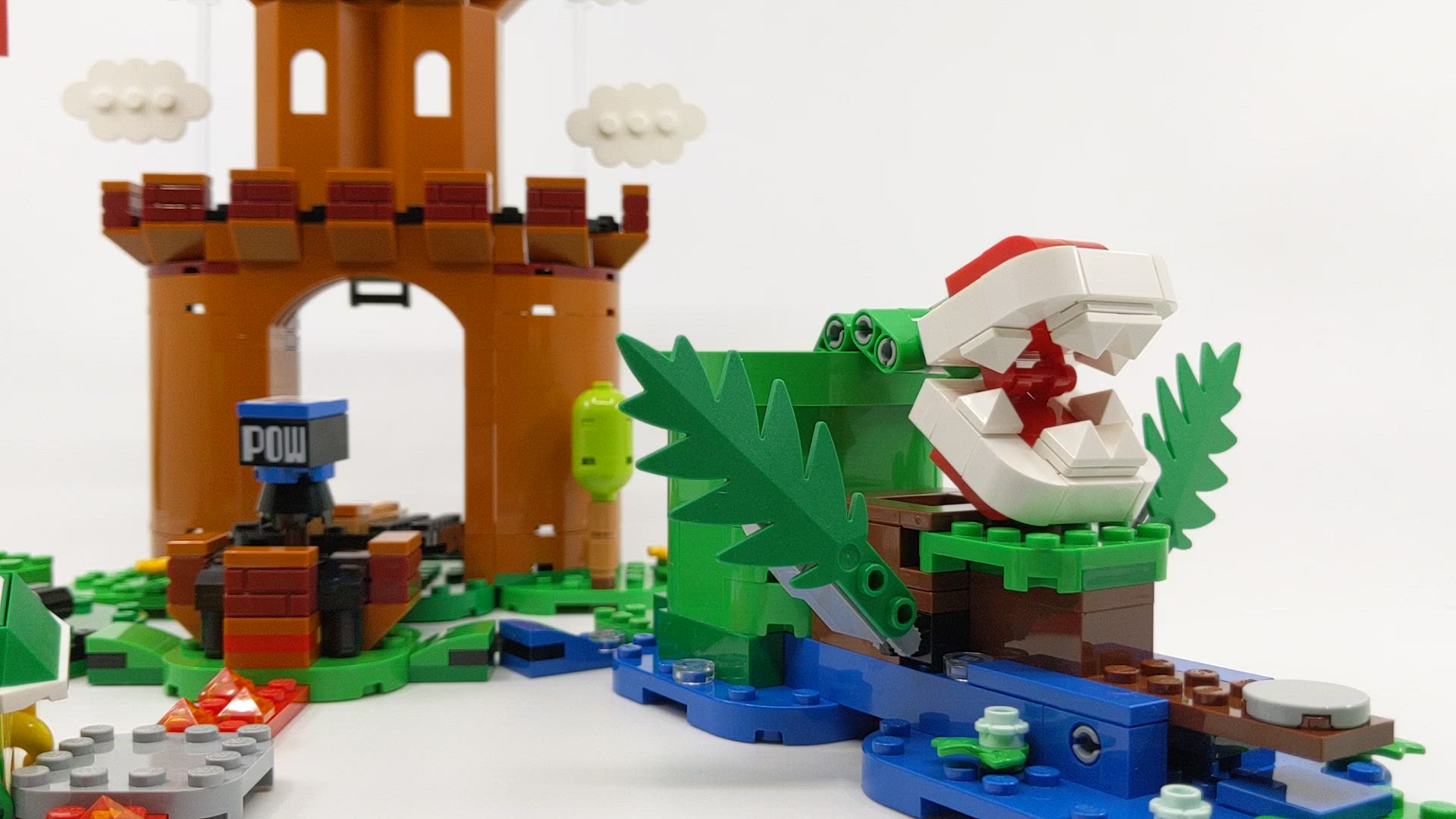 The final play feature is a flag topped goal pole and unlike the Bowser-themed one from the Starter Course, this one ‘works’. Again a hinged plate can be hit to stand the pole to attention. It’s a great take on a consistently used moment from the game, which makes the lack of Action Brick enable level end tune very noticeable. 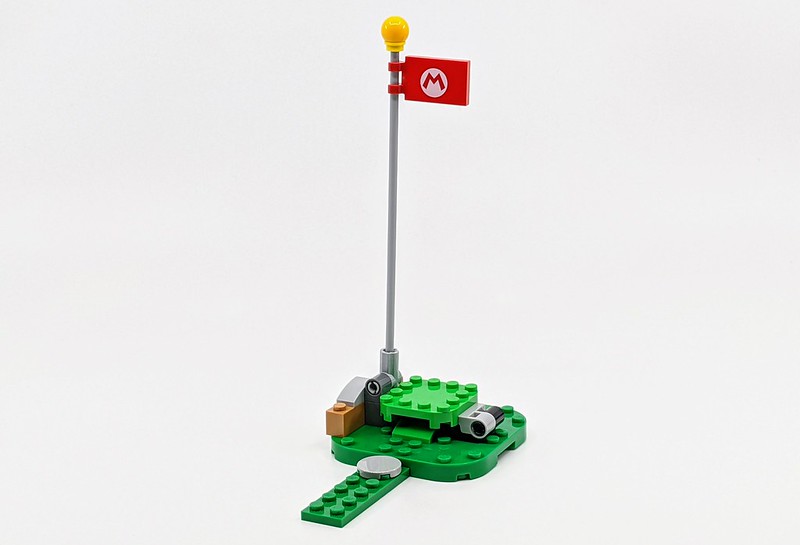 The Fortress may well be guarded but only by a couple of Bowser’s minions. There is a standard Koopa Troopa, they are commonly found throughout the Mushroom Kingdom but it would have been nice if their LEGO counterparts offered up a little more variety. This could have been given a Hammer Bros. makeover. There is also a Bob-omb, a simple little enemy, which looks great in LEGO form. There’s also the Piranha Plant, I’ve covered above. 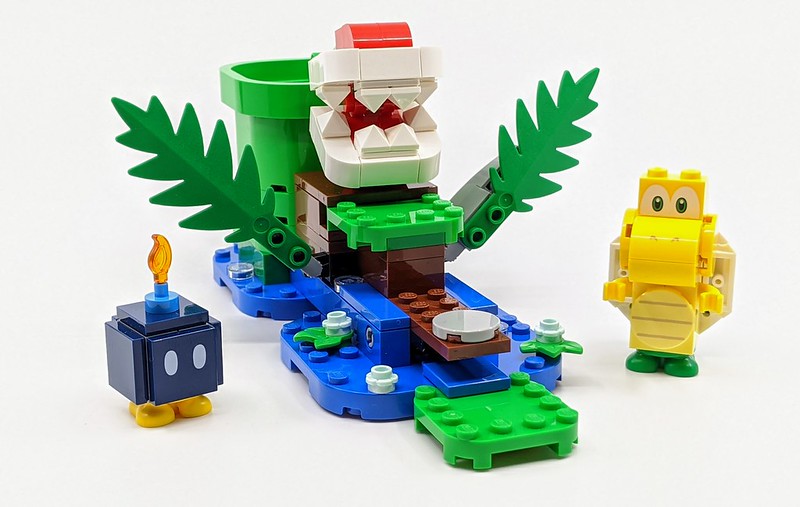 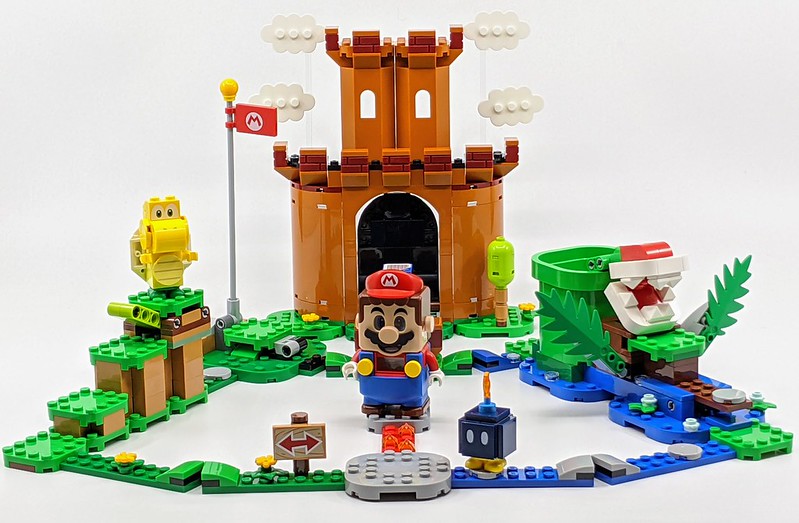 As a larger expansion set, there are five different Action Bricks to interact with. There’s one in the Bob-omb and one on the back of the Koopa Troopa. Then one is found by reeling the Piranha Plant back into the green pipe. The last two are my favourite as the motion to interact with them feels really close to what you’ll find in the games. There is a Power Block, which once LEGO Mario lands on it, it causes the fortress door to lower, which uncovers another Action Brick. 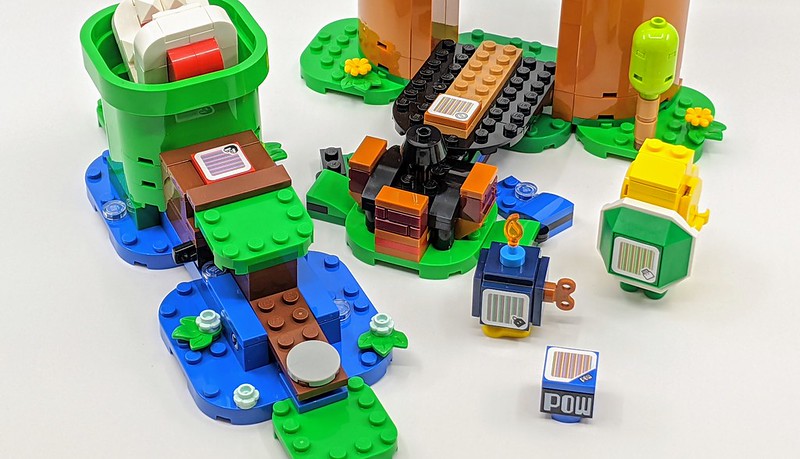 I like the idea of the set but there are a few niggles. The build process was very confusing, I assume it could be a mistake in the digital instructions as technically the app is still in an unreleased state. At one point I had a bag of elements left and it jumped ahead three bags for no reason to build something minor. With no mention at any step about returning to those leftover elements. The set all comes together in the end but I can see it confusing younger builders. The action of flipping the Piranha Plant back into the warp pipe is rather hit or miss, although once you do manage it, it feels even more of an achievement. Finally, the end flag is an amazing way of capturing the motion from the game and should have been included in the starter Course set. Landing LEGO Mario on the platform to raise the goal pole flag is very satisfying but loses a little magic as there is no Action Brick to provide that iconic end jingle. However, the joy of these sets is being able to mix and match elements from each set to create the perfect Mario Course. 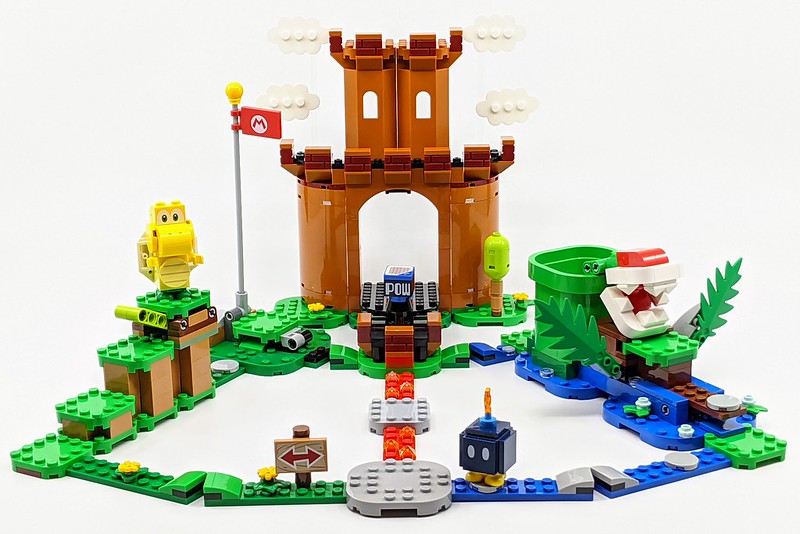