Mario has battled a vast number of critters and creatures over the last 35 years. With each new Mario adventure, new enemies pop up across the Mushroom Kingdom. Despite all these enemies being found in numerous games, the LEGO® Super Mario expansion sets have lacked many of the Mario series most diverse foe. Which is where the Character Packs come in play. The blind bagged mini sets feature one of ten collectible characters from a range of different Super Mario titles. To conclude my reviews of every single LEGO Super Mario set currently available, let’s see what the LEGO Super Mario Character Packs have to offer. 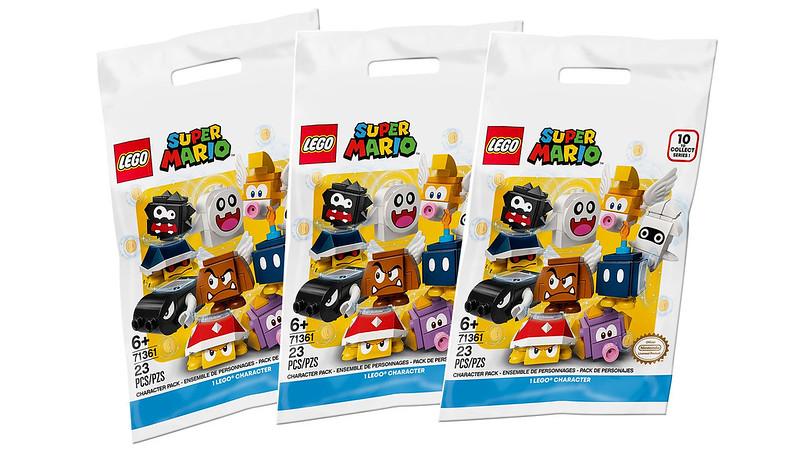 Fans can create unique LEGO® Mario™ levels with 10 collectible toy Character Packs (71361). Every pack contains a buildable character and action brick to play with in LEGO® Super Mario™ games – it could be a Paragoomba, Fuzzy, Spiny, Buzzy Beetle, Bullet Bill, Bob-omb, Eep Cheep, Blooper, Urchin or Peepa. Each is designed to be used with the Adventures with Mario Starter Course (71360), which includes the LEGO Mario character, for enhanced gameplay.

Each set is themed around a particular Mario enemy, with the series featuring ten different characters. These are not any of the big names, but more the creatures, recruited by Bowser or that just dislike plumbers. As with all the characters featured across the LEGO Super Mario set, they are brick-built and feature printed elements, with not a sticker insight, beyond the pre-applied Action Brick tags. Although the focus of each set is the character, they each inhabit a small buildable diorama, which is built upon one of the new connector island plates. These have been introduced for the LEGO Mario line and act as perfect connection points between certain sections of the various expansion sets. So they can easily be integrated into courses. They also act as cool little display pieces as each one is self-contained and featured scenic detail relevant to the characters.

Each character display area is based upon one of four different biomes, prevalent across the LEGO Mario sets and also recognised by the LEGO Mario figure. So there are yellow for desert, blue for water, red for lava and green for grassy areas. The colours act as a great way to implement them into your course gameplay. Every single character featured in the Character Packs is unique to the series, apart from the Bob-omb. So even if you already own every single expansion set, you won’t be doubling up with characters from the blind bags. 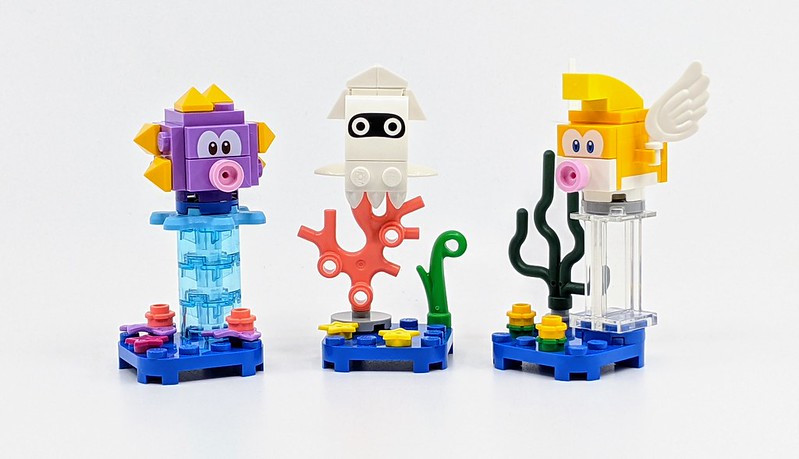 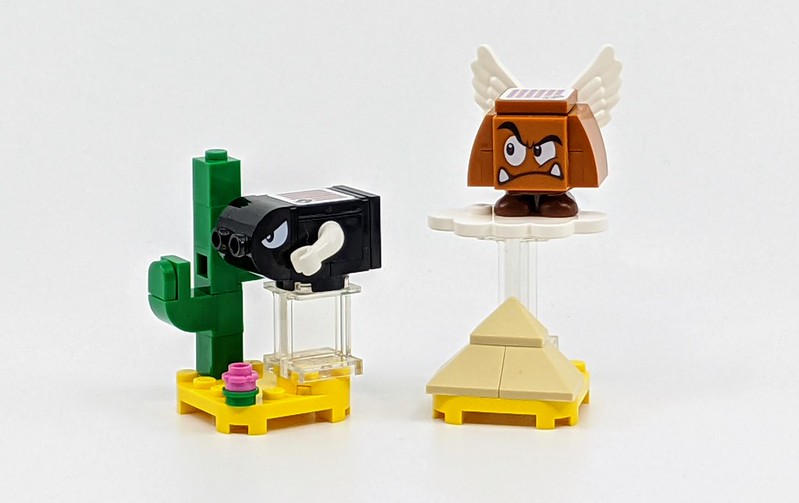 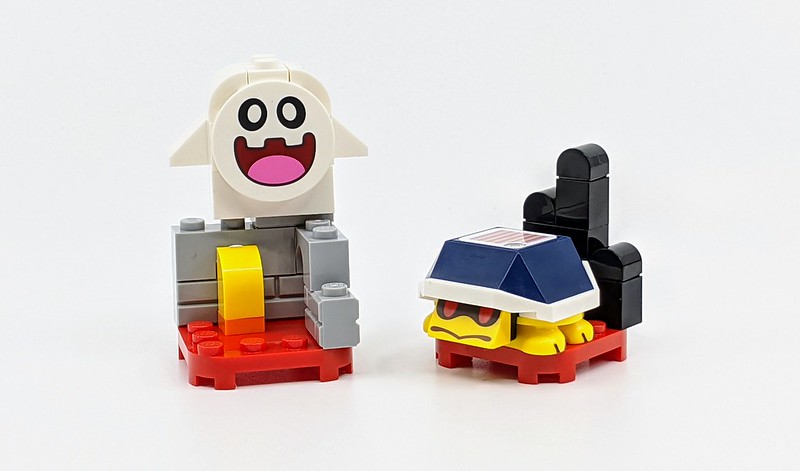 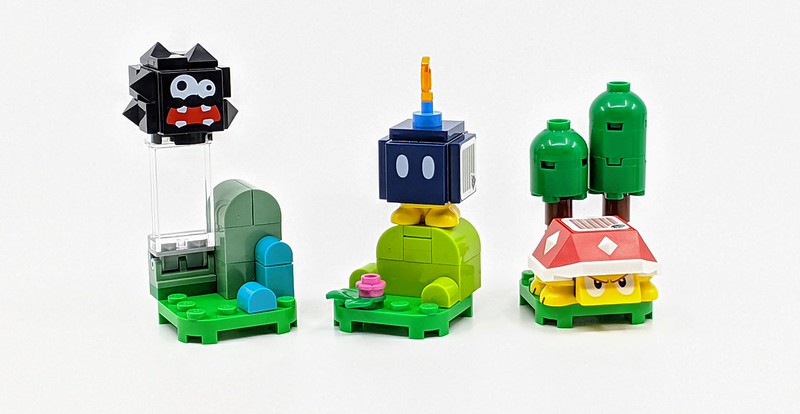 Goomba’s are one of the most common enemies found in the LEGO Super Mario sets, but the one here is unique. Not only does it feature wings, but it also has a different face print. Its display base features a very small pyramid and clear elements are used to mount the Paragoomba, to give the impression of flying. 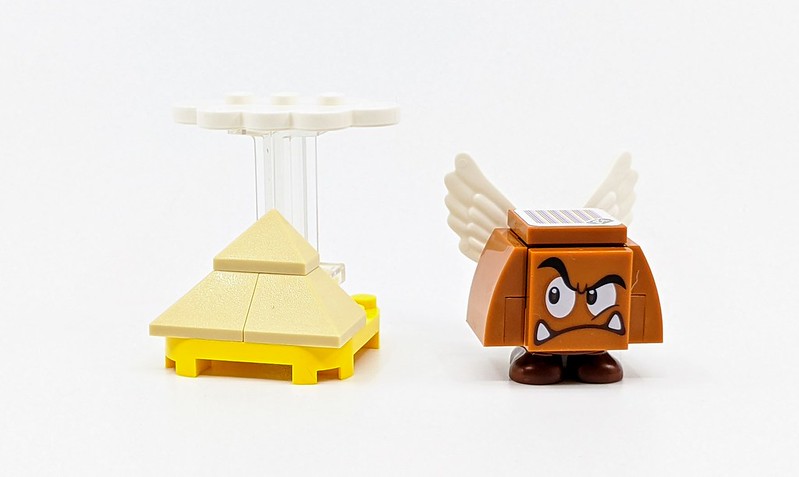 The Fuzzies debuted in Super Mario World and have remained a part of the series and spin-offs ever since. They are hairy, crazy-eyed creatures, which were difficult to defeat. The LEGO version looks great thanks to a mix of flat tiles and 1×1 pyramid plates. It’s also the only character to have a play feature. The Fuzzy is mounted on a hinged platform, so can be tipped over before being stomped on. 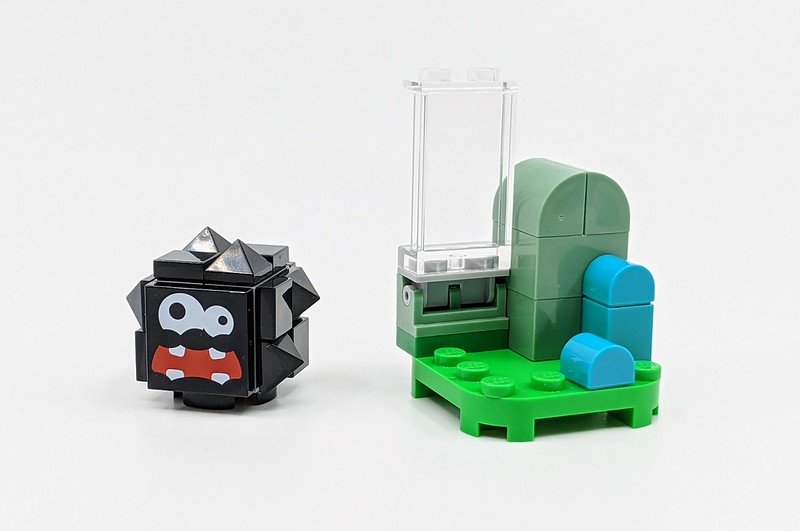 Spinys made a memorable yet annoying first appearance in Super Mario Bros., where they were thrown by Lakitus. Although they are a shell-based foes which are tricky to defeat. The LEGO version uses a new shell element, although less spiky, it looks like the character, thanks to the printed face and feet. It sits on a grassy plate, with a couple of rounded trees. 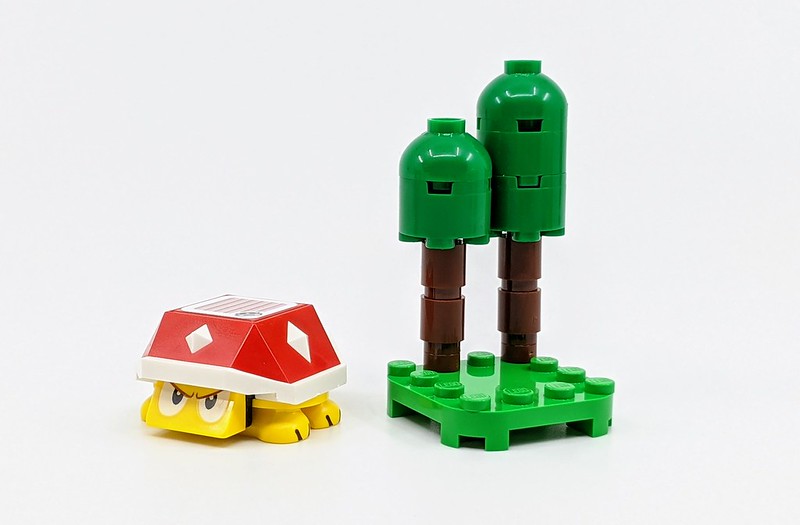 Buzzies are another original enemy but the LEGO version doesn’t do a great job of replicating the look of the game character. Similar to a Spikey, the Buzzy Beetle is a shell-enclosed creature. But the shell is smooth and almost looks like a helmet. For the LEGO take, the Koopa shell is used, minus the spikes and it doesn’t really look much like the game version. I think this is because of the Action Brick. 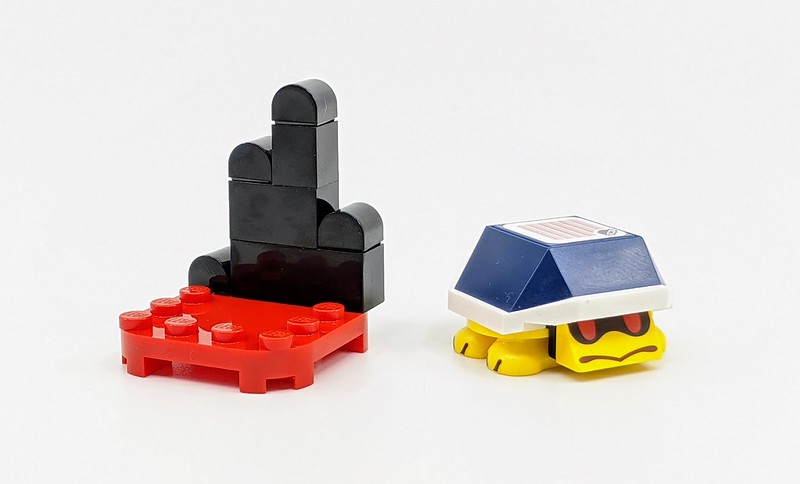 One of the most shocking elements of this Character Pack is the name. With all traces of the word bullet removed from set 71366, here the character retains its actual name. The Bullet Bill here is much smaller and squarer than Boomer Bill, which makes it feel a little similar to the original in-game models. It comes on a desert-themed plate, with a cool cactus build. 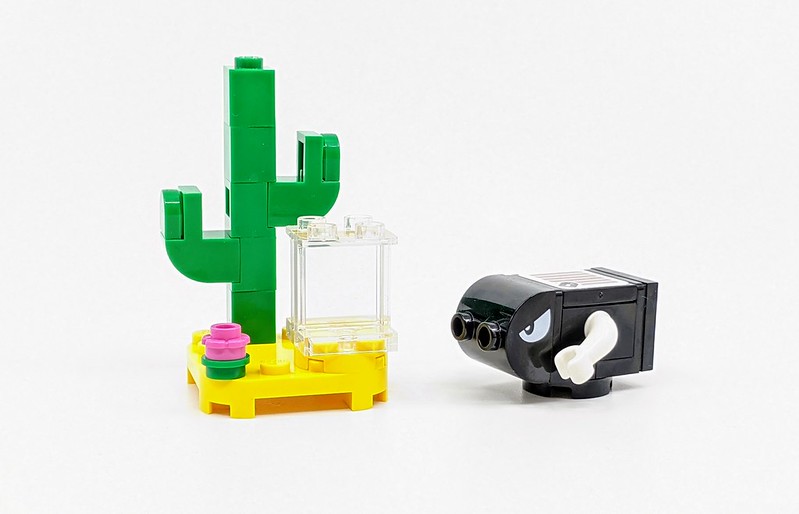 Of all the characters found in the Character Packs, this is the only one which you can find in one of the expansion sets. You can one the exact same Bob-omb build in the Guarded Fortress set. It’s a fun take on the character and it’s nice to be able to get it in a much cheaper way compared to the expansion set, it just would have been nice to have a completely unique character. 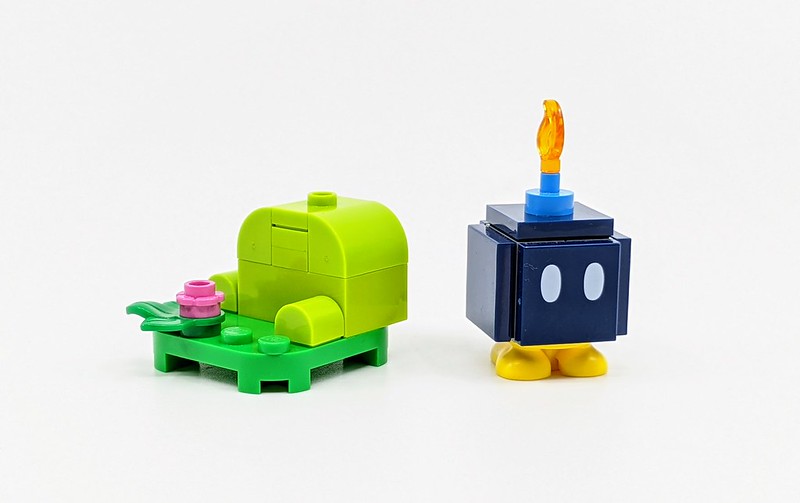 Cheep Cheeps are fish found across the Mushroom Kingdom. This yellow variant was introduced in New Super Mario Bros. on Wii. Unlike their red counterparts, the Eep Cheeps run whenever approached. I love the LEGO version of the Cheeps and this is just as cool as the red version. It comes mounted on a watery display plate. 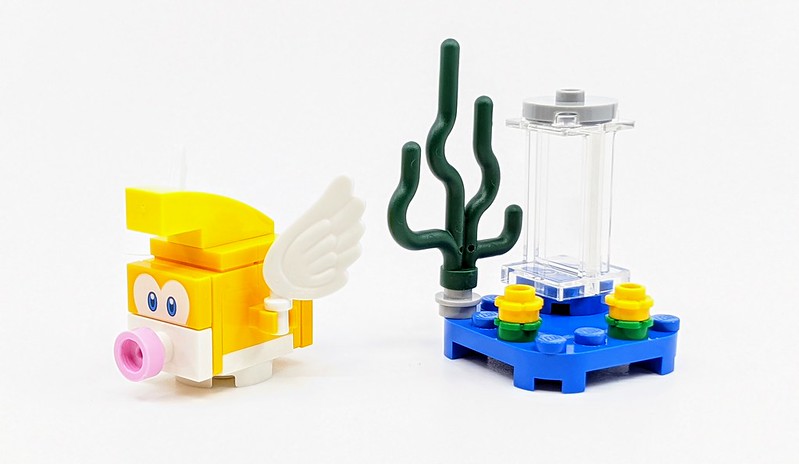 The Bloopers are a squid-like creature which is found zig-zagging in the waters of Mushroom Kingdom. They also pop up as a weapon in Mario Kart and even inspired the Inklings found in the Splatoon games. Of all the Character Pack creatures, this is my favourite. The build is great and the display plate also looks great. It’s definitely my favourite Character Pack character. In fact, all the ocean-dwelling characters are some of the best in this series. 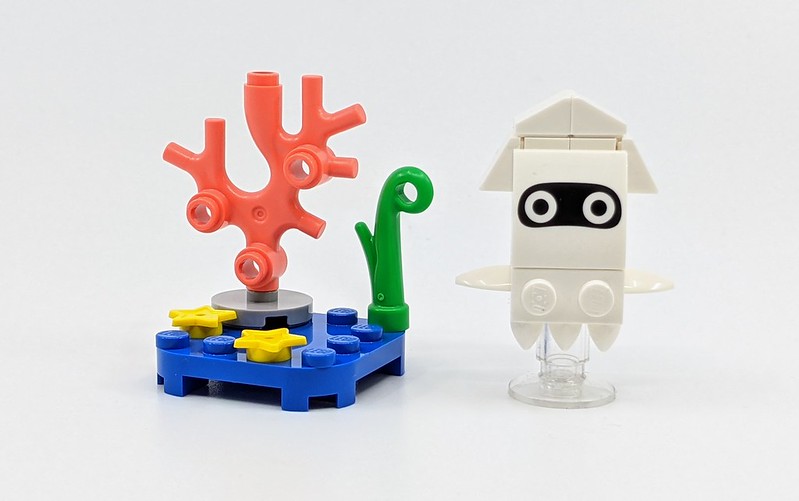 Although an older enemy, the appearance of the Urchin has changed over the years and the LEGO version is based on a more recent take of the character. The spikes aren’t as long as they could be, but the overall look of the character is fairly close to the game version. The Urchin has the best display plate of all the Characters Packs. A stack of transparent blue 2×2 round bricks is topped by blue splat gear, which nicely represents an upshot of water. 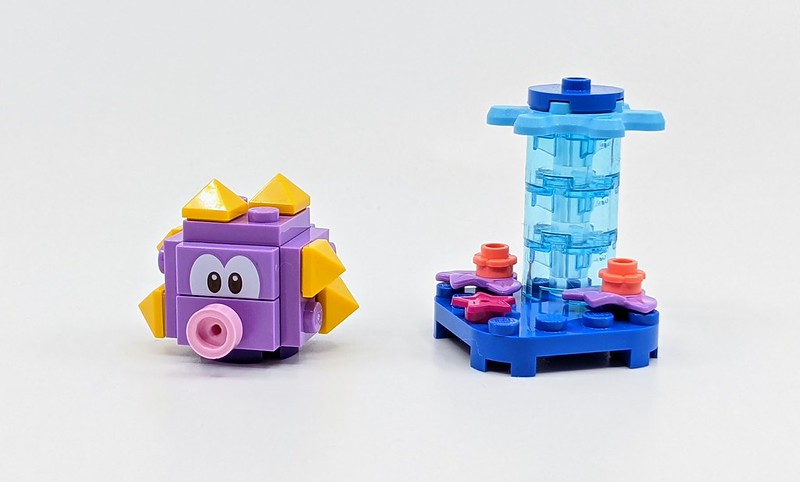 Boos are the most common spooks to be found in Mushroom Kingdom’s most haunted realms, but a new spook on the block arrived in Super Mario 3D series, first seen on 3DS. They have a more common ghostly form, so a floating sheet look instead of the rounded body of the Boo. It’s one of the largest characters in the collection and uses one in the larger round plates for its face. It comes sitting on top of a ruined wall on a lava connection island plate. 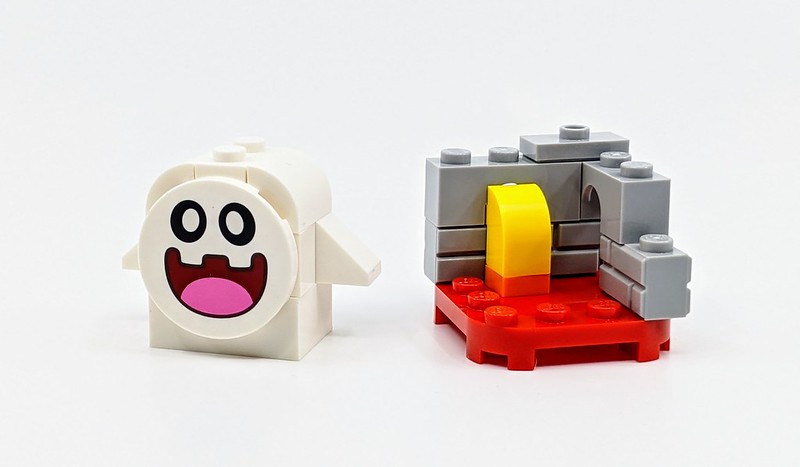 Action Bricks play a key role in the LEGO Super Mario sets. They act as trigger points for various actions and allow you to collect coins during play. Each character has an Action Brick, all providing LEGO Mario with different ways to gain coins. 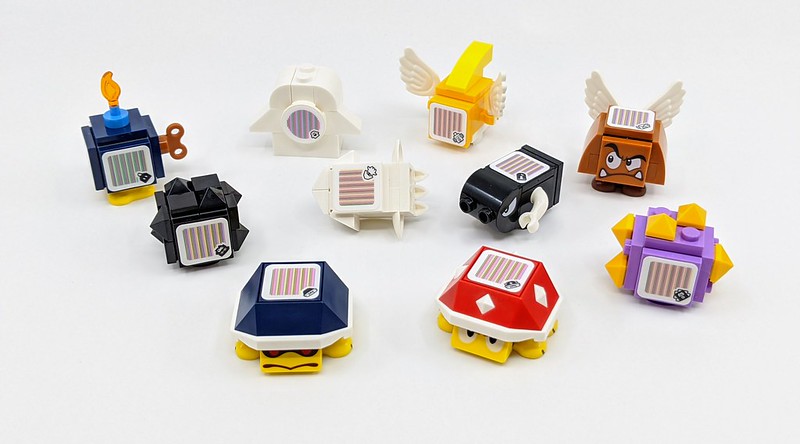 Although the various expansion sets feature a number of different enemies, they do lack a little variety. So it’s nice to be able to expand King Koopa’s forces with these additional Character Packs. I like that they all come on little display plates, which not only makes them easy to connect to the larger sets but also makes them great for display. Some of the characters look better than others, I definitely like the ocean-based characters the most, as they are the most varied and fun looking. The Bob-omb is the perfect size for these Character Packs, but I would have preferred something new or at least a slight variant to the one included in the Guarded Fortress set. Although LEGO provided just one of these packs for the purposes of review, I had to purchase the rest of the characters. A review of a single character in a collection of ten different sets didn’t make much sense. So I hope you found an overview of all the sets more interesting than a single pack would have been.

One of these characters packs was provided to BricksFanz.com by the LEGO Group for purposes of review. The others have been purchased in addition. The thoughts within this review are that of BricksFanz.com and do not reflect those of the LEGO Group. Providing the set for free does not guarantee a favourable opinion of the set.