Next month will see the next release of the second wave of LEGO® sets based on The LEGO NINJAGO Movie, some of them have appeared early in certain stores, which means we can bring you another advanced review of one of those sets, namely 70629: Piranha Attack. This is the smallest set in the second wave of The LEGO NINJAGO Movie sets and introduces the alter ego of Lloyd’s mum, Lady Iron Dragon. After Lord Garmadon’s Shark Mech from garmadon, Garmadon, GARMADON! the little Piranha Mech included in this set is one of the Shark Army’s most unique vehicles. But how does the whole set shape up? Let’s find out in our review of set 70629: Piranha Attack. Help Kai and Misako save Ray from Piranha Attack in NINJAGO City! Shark Army Thug is chasing Ray’s rickshaw in the powerful Piranha Mech. Avoid its snapping jaws and dodge the flick missiles. Attack with Kai’s katanas and Misako’s bow and arrow, and take down that Piranha! The build is split into two separate builds, with this traditional rickshaw being the first part you build. It’s a fairly small build, but still has a fair amount of pieces. Most of which are found in the back section of the rickshaw. The most impressive part of this section is the canopy of the rickshaw, which is achieved with two curved car bonnet elements. Two are used back to back to give the rickshaw a unique roof. They work amazingly well and I love how elements mostly used for one thing in LEGO builds can be used in other surprisingly cool ways. The base of the rickshaw is full of retro fun with an old Classic Space seat element used for the passenger seat and a horse gig harness elements used for the rickshaws handle. 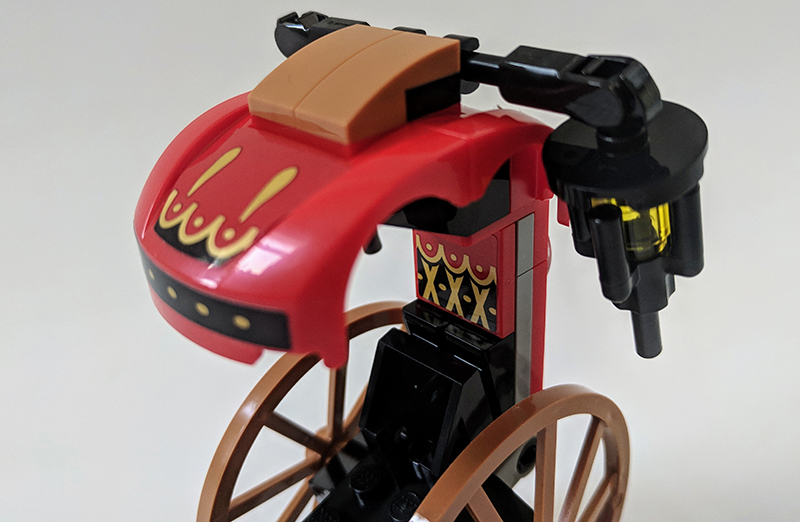 The only odd part of the rickshaw is the wheels, these use two spoked wheels but they connected facing inwards, it feels wrong they are affixed this way but they do look good and they fit nicely with the overall look of the rickshaw. You’d think with all the elements the rickshaw has, it would be a little top heavy, however it’s easily anchored by a minifigure holding on to the handles at the front. The next part of the build is the mini munching Piranha Mech, which is another vehicle from Lord Garmadon’s fishy fleet. It continues with the sand blue and yellow colour scheme already used in other Shark Army vessel, which means most of the parts used here are newly recoloured for this set. It may seems like a small build but it’s actually quite involved with a surprising number of parts squeezed into such a small build. Most of the build is actually hidden within the mech and not really seen until you open its mouth. Which makes the Piranha Mech even more impressive. The Piranha Mech isn’t just some brainless drone, it’s piloted by one of Garmadon’s goons, via a little seated control area within the mech snapping jaws. 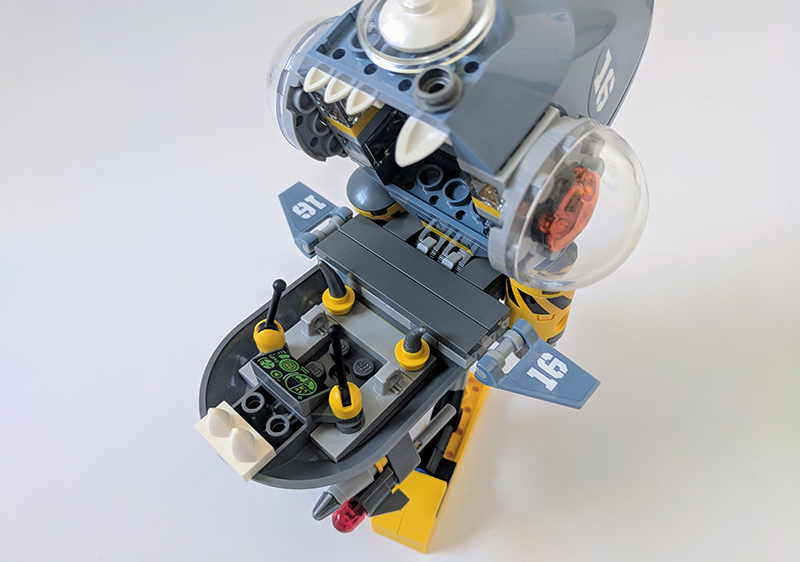 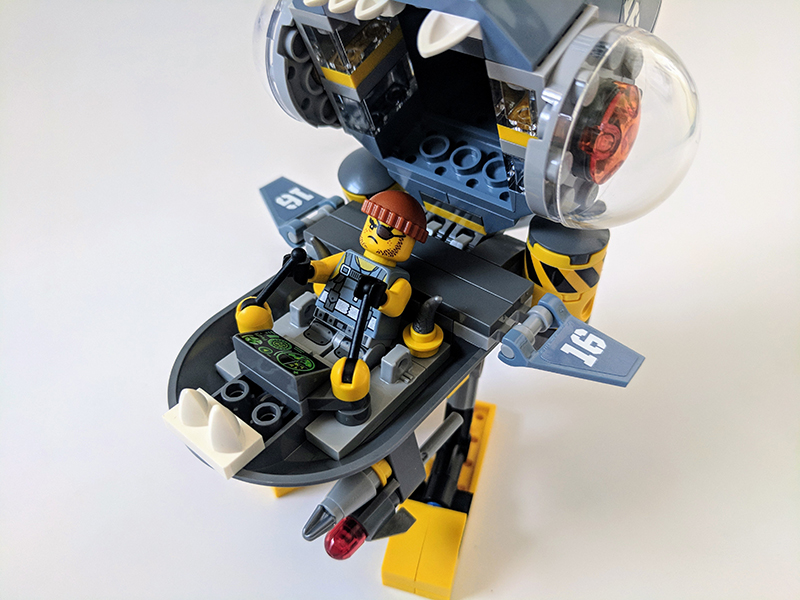 The build begins with element which would commonly be associated with the build of a boat or aircraft, a simple search of the element number brings up a number of LEGO City sets which fall into one of those type of vehicles. The unusual type of parts use is carried over to the upper section of the build as well. Creating curved edges with LEGO elements is always tricky and in recent years, vehicles such as helicopters and planes have often used large single mould pieces to achieve the desired look. So it’s quite fun that the Piranha Mech’s very unique shape, uses a number of newly recoloured old school parts, including a couple of different style boat hulls. 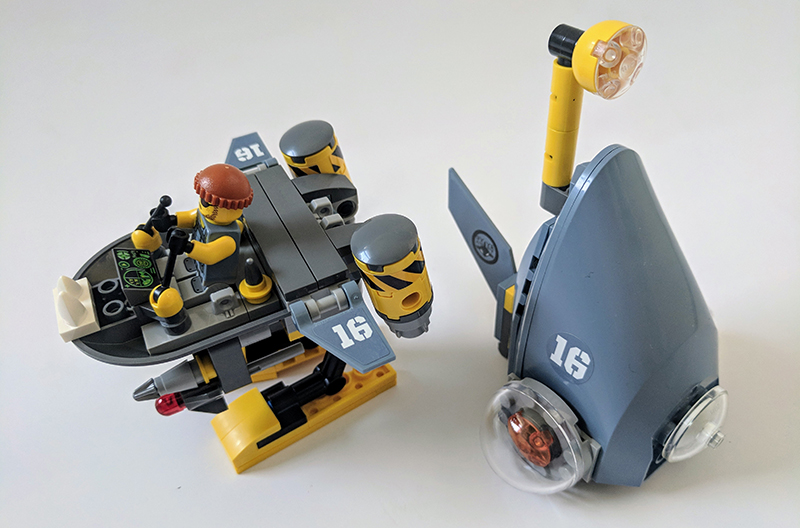 There are loads of nice little details crammed into the Piranha Mech, all of which do a great job of blending natural features of the fish which has inspired it and actual sea faring vessels such as subs and ships. These include the bulbous eyes and little fin on its back which carries the Shark Army insignia along with things like the periscope and fuel thanks. In fact the designers have been quite clever with these features as the natural elements are mostly sand blue and grey with much of the mechanical pieces being yellow. Despite the sharp contrast in colours, they all work together and even though there are various types of vehicles featured in different sets, these trends keep the fleet nice and uniform. Those tiny feet wouldn’t seem like they couldn’t support the body of the mech, but they do and they are simply built from a few plate elements and a couple of Technic pieces. I like how they kind of look like flippers. It’s nice to see Lord Garmadon is committed to the themed branding of his aquatic army. 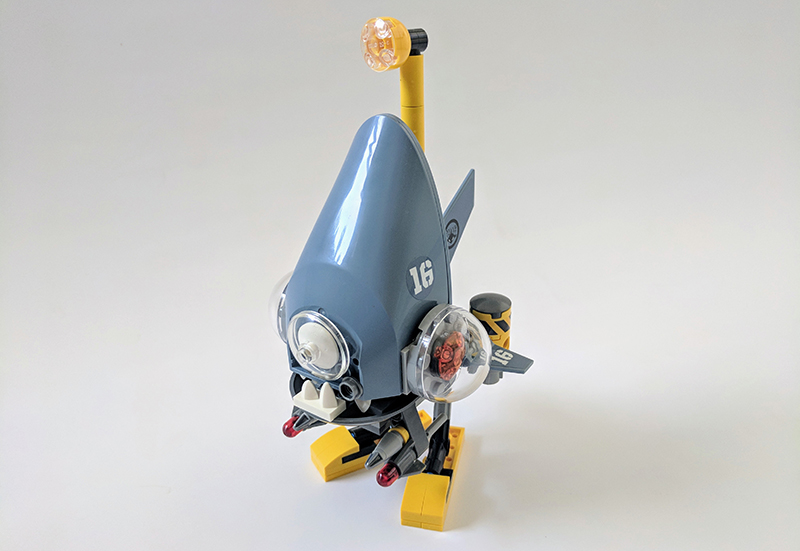 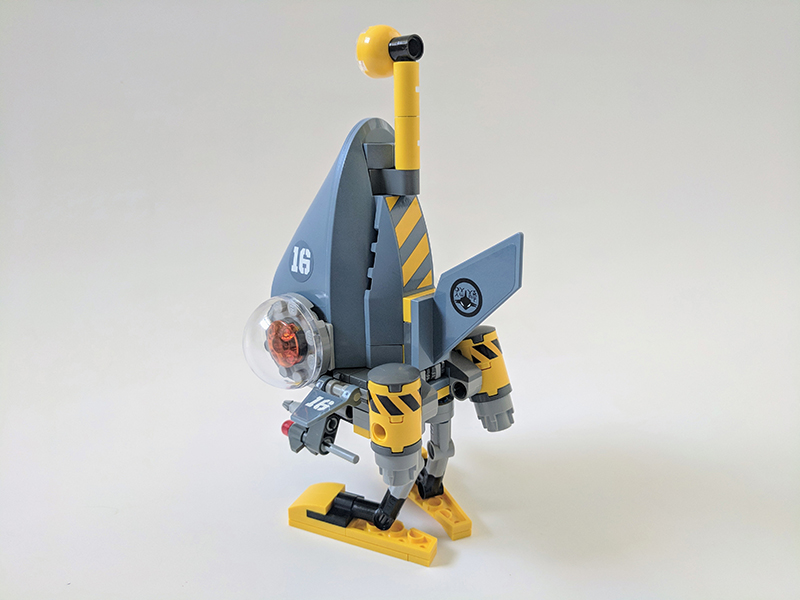 The set includes four minifigures, including Kai, Lloyd’s mum Misako in her Lady Iron Dragon guise, a generic Shark Army thug and rickshaw driving NINJAGO City resident Ray. It’s a rather odd line-up of characters to be honest. Ray and the Shark Army thug are fine as they are both connected to the vehicles in the set. But the inclusion of Lady Iron Dragon is a little harder to explain. If you’ve seen the movie, you’ll know this version of Koko appears in a flashback when she first meets Lord Garmadon. Back then he didn’t command the Shark Army. But even more grating is Kai, he appears in more sets than any other ninja, that includes the main character of Lloyd. I know he’s a popular character but he really doesn’t need to be randomly inserted into so many sets sets. Another NINJAGO City resident would of been a better character to include or even another member of the Shark Army. 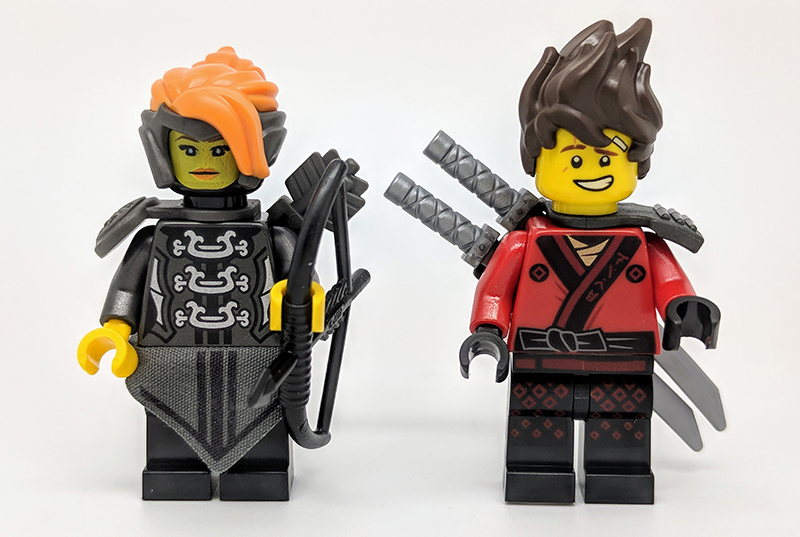 Rant over, so to back to the minifigures you’ll find in the set. Kai appears in his unmasked form but wearing his Secret Ninja Force outfit of red and black robes. This is the exact same torso and legs which is used for many of the other versions of Kai from the many other sets he features in. The only slight different to some other versions of Kai, is his shoulder armour. In some sets this is light grey, in others it’s darker metallic grey like the one featured here. Kai has a double-sided head, with his cheery grin on one side and his more serious determined stare on the other. I still don’t understand why he needs to be included in yet another set. The Shark Army Thug is almost as prevalent in The LEGO NINJAGO Movie sets has Kai is, he is fairly generic hence the lack of name, with light grey legs, with a little patch detail on the knees and belt detail across the waist. Unless he’s the same character across the various sets, Garmadon may want to invest in some protective eye wear for this minions as this Shark Army Thug is another member of army who is sporting an eye patch or maybe it’s just part of the uniform. Either way the eye patch along with the beanie hat element, gives the thug as old salty fisherman feel. Ray may just be another NINJAGO City citizen but at least he gets a name and is a nice inclusion in the set. He may not be overly exciting to look at but does sport the new for 2017 bamboo hat, which many of the residents of NINAJGO City seem to favour. But the minifigure that will interest most is Lady Iron Dragon. As mentioned above Lady Iron Dragon is actually Lloyd’s mum Mikaso or Koko. In the movie she appears in her battle outfit during a flashback scene, which does make her inclusion here a little strange. However she is a great little minifigure with a nice new hear piece that combines her flowing red locks with a armoured helmet. This works really well with her shoulder element, which is extremely detailed for such a little piece and gives a nod to the classic quiver from early LEGO sets. A material piece is used to extend Lady Iron Dragon’s outfit and this flows nicely with the print detail on her torso. Unfortunately the same can’t be said for Koko’s head piece. A black head element is used with the face printed onto it. Printing yellow onto a darker surface just doesn’t work and as you’ll see above, it makes the yellow appear quite dull looking. Still Lady Iron Dragon is a great minifigure and this is the cheapest way of adding her to your collection. Despite the confusing mix of minifigures and poorly printed face on Lady Iron Dragon, the is one of the best of the smaller LEGO NINAJGO Movie sets. The rickshaw make great use of parts and is fun to build, but the Piranha Mech is by far the best part of the whole set. It looks great, it’s really fun to build, it uses parts in a fantastic way and has a few simple but fun play features. It’s also one of the sets which is great for parts should you be one of those MOC builders out there who likes to bulk up their parts collection with interesting elements. At just £14.99 you’re getting four minifigures including new Lady Iron Dragon who only appears in the more expensive Quake Mech set. Piranha Attack will be readily available from December 1st and if you’re quick you’ll be able to grab it early from Asda.com.