The words LEGO® and Space have an almost legendary connotation when placed in the same sentence. So when rumours of new space-themed LEGO sets emerged, many reminisced about bygone era of the Classic Space theme. It later turned out that these new sets would actually be based within the LEGO City line, leading many to think we would be getting another rehash of the City Space sub-theme from 2011. However these new sets are actually from a brand new sub-theme called Mars Exploration. Yes the LEGO City space program has set its sights on the red planet and it has resulted in a selection of interesting new sets. This isn’t the first time LEGO has ventured to Mars, in 2007 the Mission to Mars theme was released; but had a more fantasy element to it. These new sets are based in reality and are inspired by real life NASA space programs and vehicles. The first set from the new range I’m be taking a closer look at is the awkwardly named 60225: Rover Testing Drive. 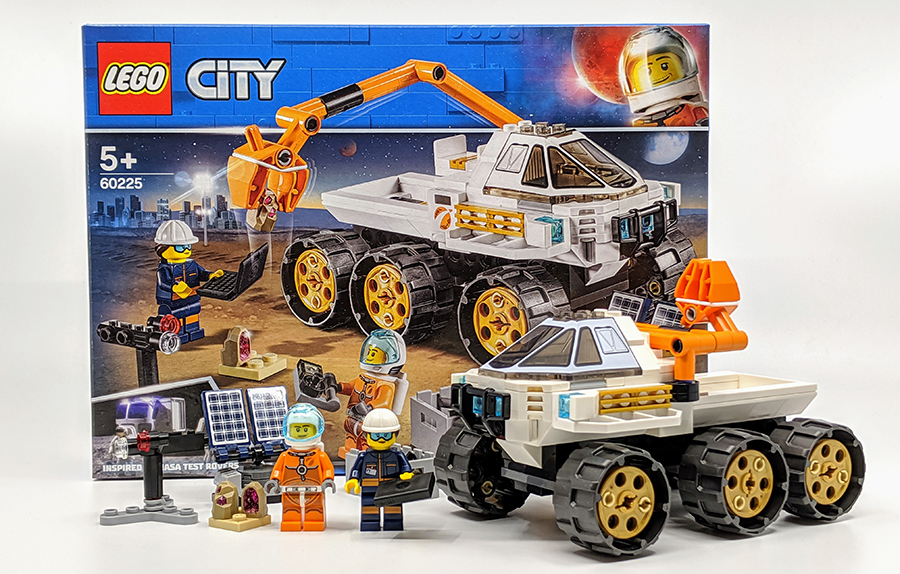 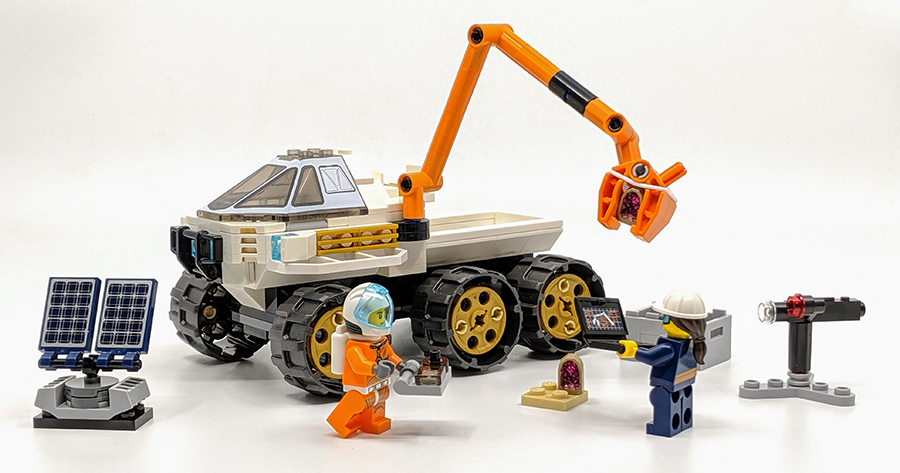 Space exploration has be depicted in LEGO sets for almost as long as there has been LEGO bricks. LEGO City has seen its fair share of space themed sets, but the new Mars Exploration sub-theme certainly offers something a little different to what has been seen before. The Rover is one of the smaller sets from the new sub-theme and offers a fun looking build. It’s a six-wheeled truck type vehicle, with an open flatbed section at the rear. This can hold the additional accessories of a storage box and a portable solar panel array. 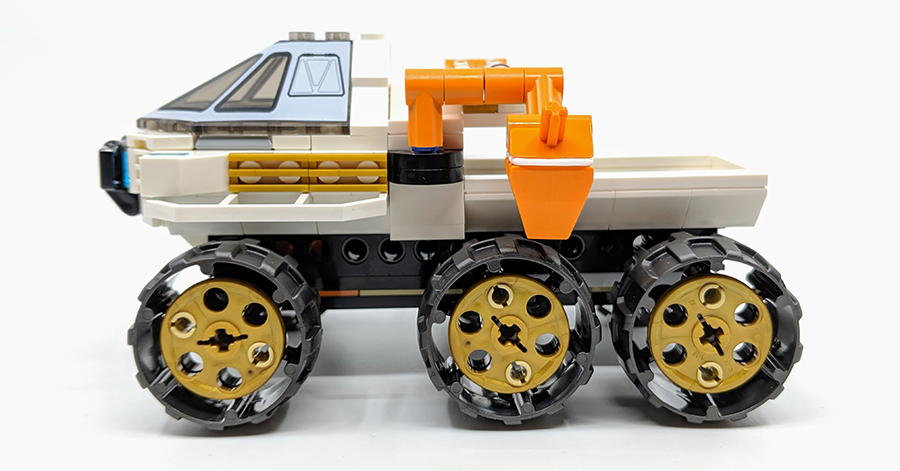 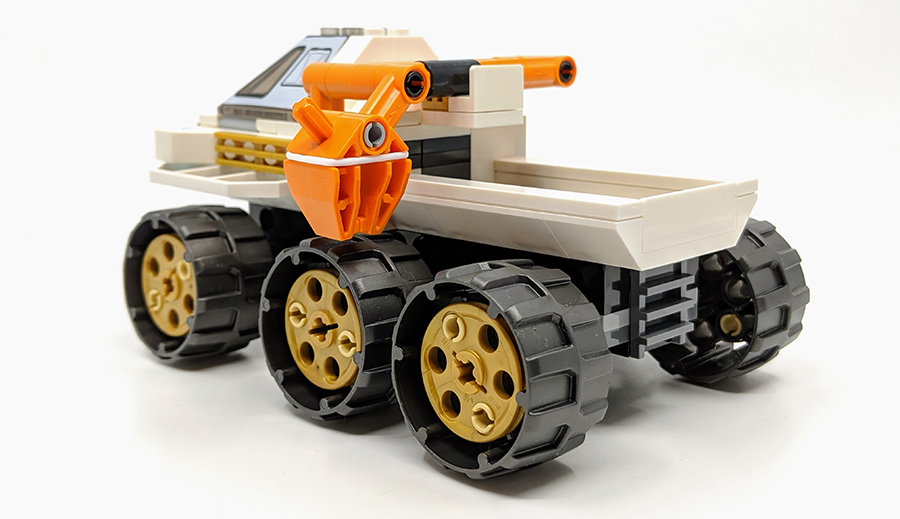 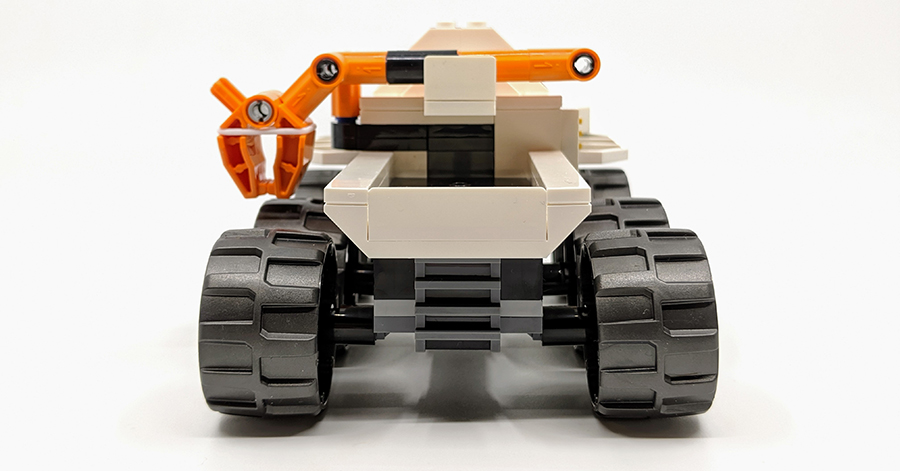 The Rover features an articulated arm, which is made up of various Technic elements and a new gripping arm. This is made up of two spade-type elements, with Technic axis connector pegs. They are given gripping power, thanks to an elastic band, which loops both sections. The arm has four points of articulation so can be folded into the back of the Rover or used to grab rock samples. The front section is a little more open than the NASA vehicle it’s inspired by. A transparent canopy section can be easily removed to access the cockpit of the Rover. This is a fairly simple looking section, but it has great part use around the outside area, particularly the 2×2 corner plates and the white barrier elements. 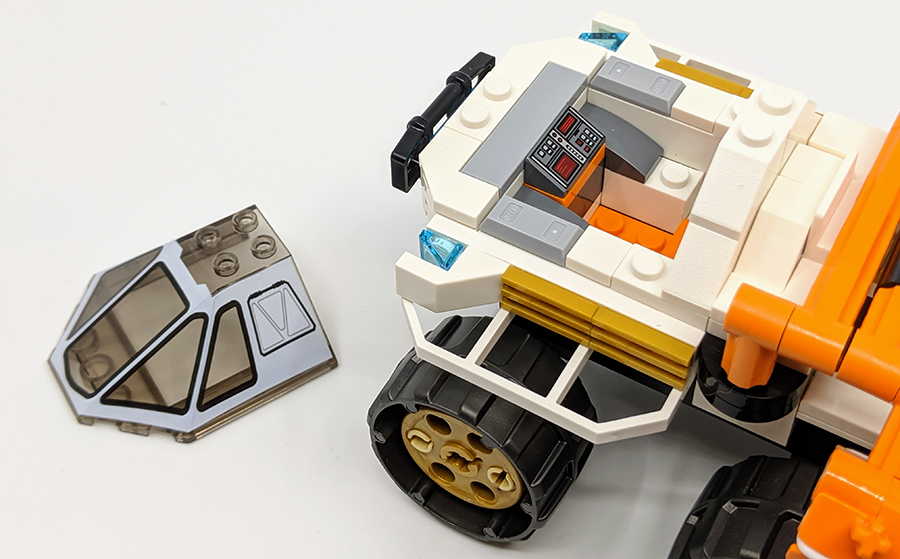 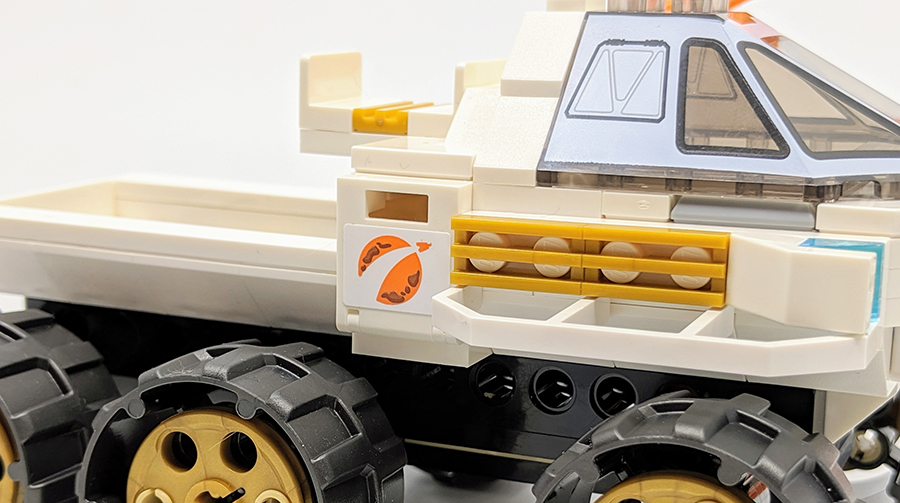 One of the most exciting part of the set is a brand new element – the geode rock. These are volcanic rocks, which when cracked open revealed an amazing magical formation of minerals. The set features two geode elements, which feature the pink inner colouring. The element is dual moulded, with a dark tan used for the outer section and a transparent, glittery piece for the inner part. It’s a cool little element and hopefully it will be used in other sets in the future. The set features two Minifigures. A female Ground Crew Technician and a male astronaut. Although the LEGO CIty range isn’t know for it’s stand-out Minifigures, the two here are fun. The tech has a great face print and I really like her laptop, with a sticker screen. The astronauts outfit is a little more interesting, with the Mars Exploration logo printed on the torso and a brand new helmet and visor combo. This has an almost Alien Nostromo crew suit feel to it. The Test Rover is an interesting build, which uses parts to great effect to give the vehicle an interesting shape. I’m not sure if the LEGO Designer behind this new theme are fans of Space 1999, as the cockpit element and overall aesthetic of the crafts, look similar to those from that classic TV show. I quite like the colour scheme of white, gold and orange elements. But the best part of the entire set has to be the tiny geode elements. This is the smallest and therefore cheapest set to feature them. I’m definitely interested in building some of the larger Mars Exploration sets after checking out this one.