Over the last few weeks we’ve been taking a look at the various new LEGO® Elves sets released earlier this year. Unfortunately our last review has been delayed a little due to missing part. Now this is a very rare occurrence and a replacement was swiftly sent out in the post. Funnily enough it was the very last part needed to complete the set. For our final LEGO Elves set review, we take a look at the largest set in the range – Noctura’s Tower & the Earth Fox Rescue. The set finally reveals the shadow-dwelling dark elf witch, Noctura, who has been battling the Elves to capture their Guardian Creatures and their Elemental diamonds. So let’s crack on with our final LEGO Elves set review 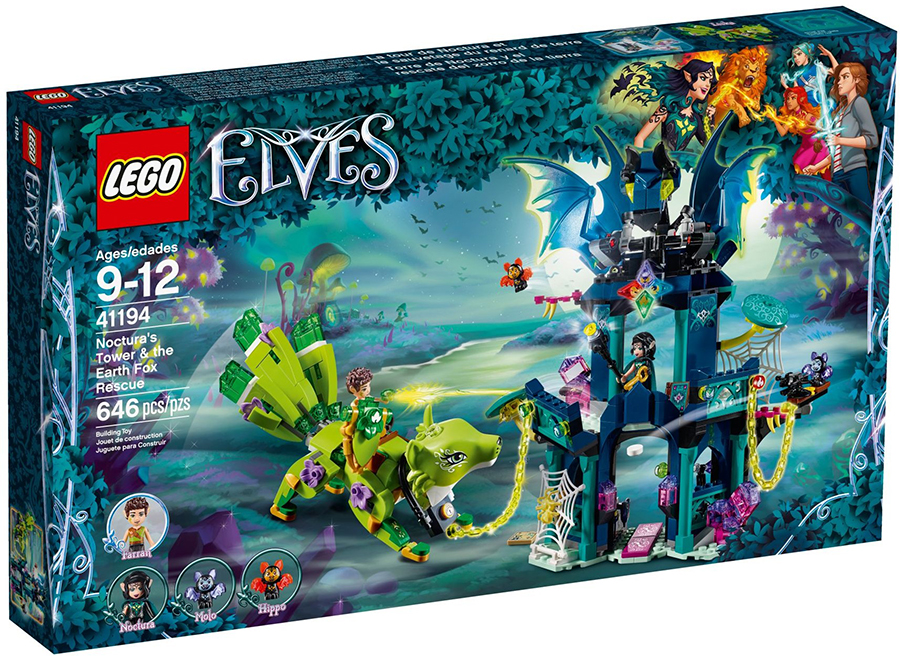 The build begins with the Earth Guardian, Liska the fox. As with other guardian creatures, this is a mix of brick-built elements with a special, unique head piece. Liska is prodominatly made up of lime green elements, with tinges of white, lavender and transparent elements. A colour scheme that works well as matches that of Farran, the Earth Elf. Although the build uses micro ball-joints to create its various point of articulation, much better effort has been made to ‘hide’ them. In fact apart from the one used to attach the head to the body, you can’t really see the grey bits at first glance. This has definitely been an issue with some of the Elemental Creatures. 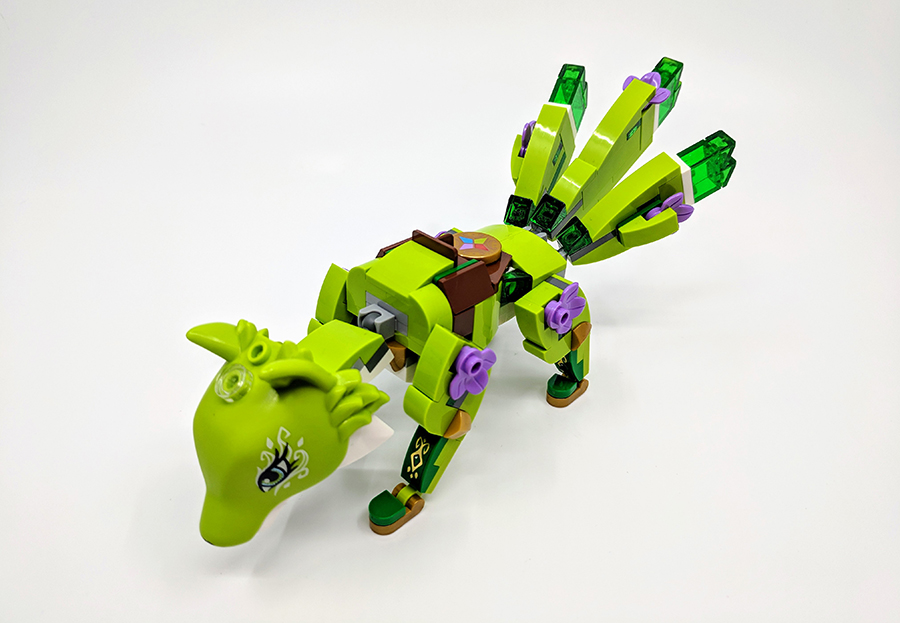 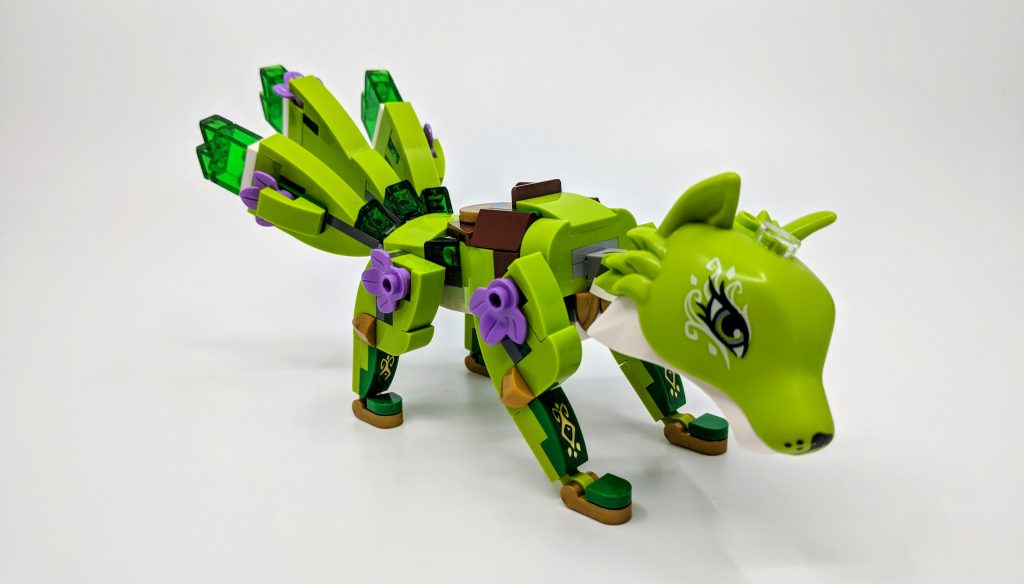 The tail is split into three, with each connected by a micro ball-joint, but as mentioned above, these are fairly well hidden. On the back of Liska you’ll find the same brown seat in which a mini-doll can be placed and a printed Elemental seal, which all the Elvendale Guardian creatures sport. One of the Liska’s least appealing features are the tiny feet. They just look at little too small when compared to the rest of the animal. Maybe the new leaf elements could of been a little better than the half circle tiles. This is a minor gripe, compared to how nice that rest of the Earth Fox looks. 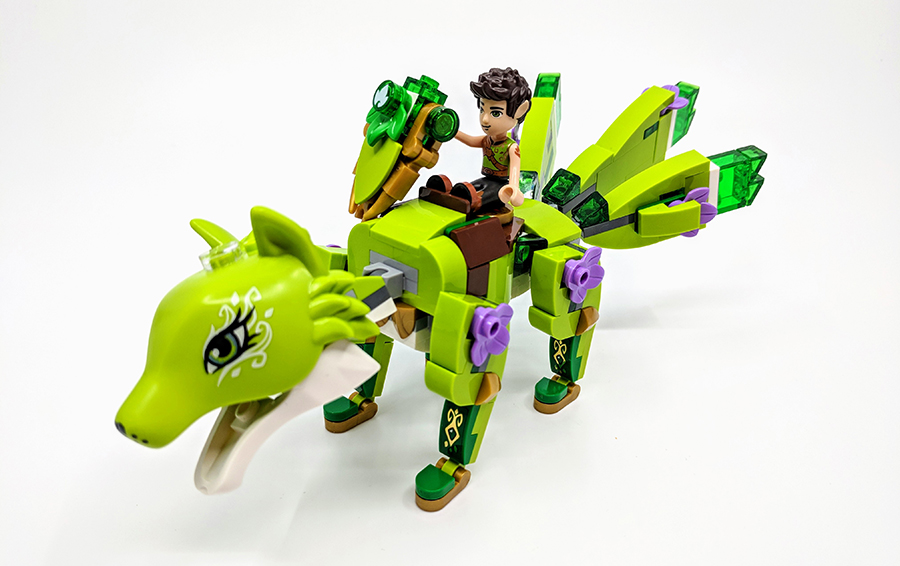 The majority of the building is focused on Noctura’s dark Tower of Shadows and what a treat is it. LEGO Elves sets have always been filled with creative use of parts and colours, particularly the buildings. That’s certainly apparent with the tower. The royal blue and teal colours work really well together, not only tying together all those odd contracptions from other sets but also in helping to convey the evil dwelling within. As well as the use of those colours, a number of transparent elements are dotted about which are some of the Elves sets best features. A simple but very affective use of parts and colours, to give impactful visual detail. 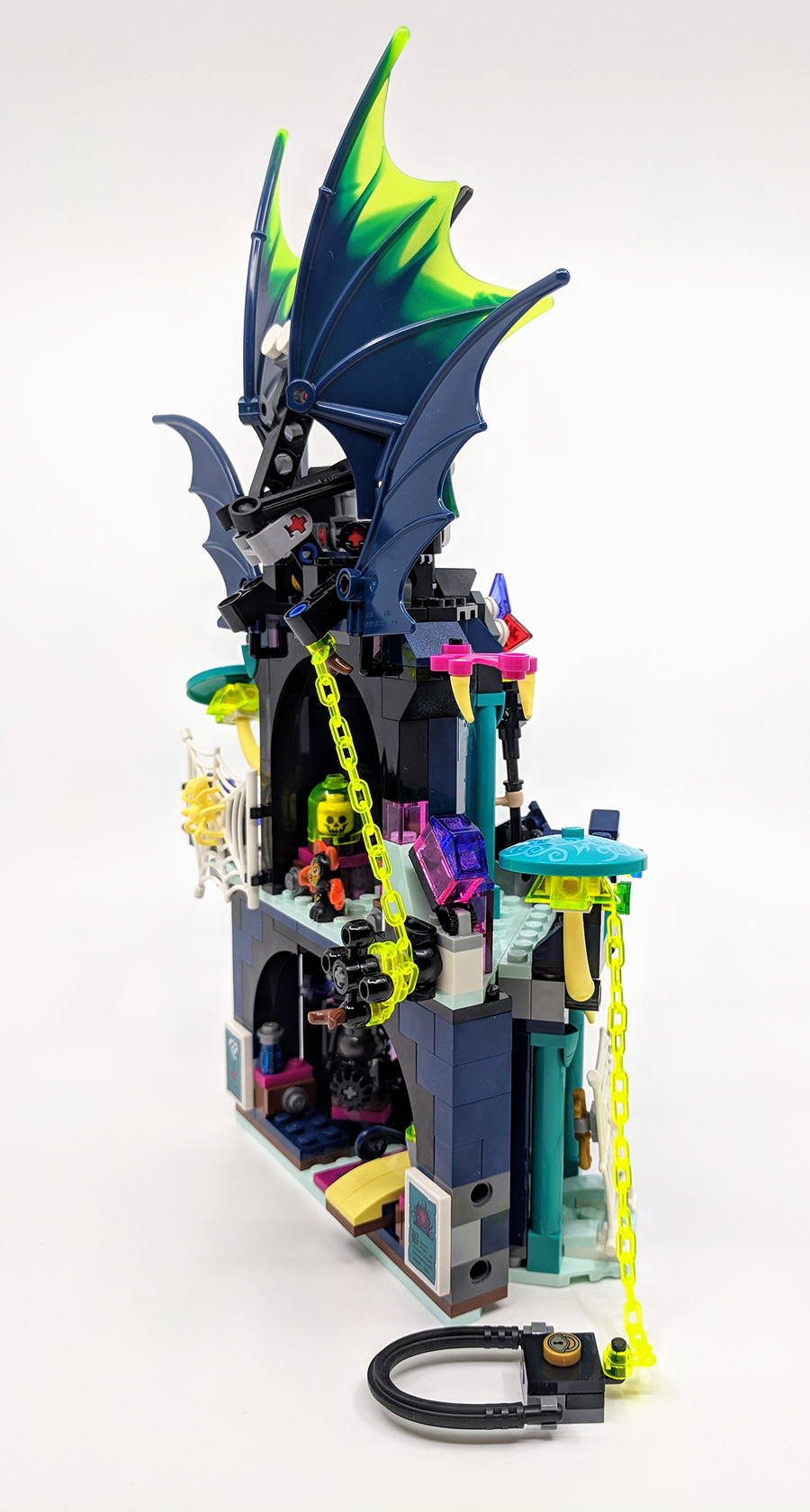 The interior may not be that spaceous, but there is still some pretty fun little features going on. The bottom floor has a cauldron for mixing evil potions and lounger for chilling out, after all being bad can be hard work. Behind the spiderweb is a hidden key, which I assume can unlock the oversized padlock, chained to the tower. The upper floor has a balcony, stud-shooter crossbow and a couple of great mushrooms, complete with printed domes. Plus there’s an area to pop the Shadow Bats complete the random piece of food. 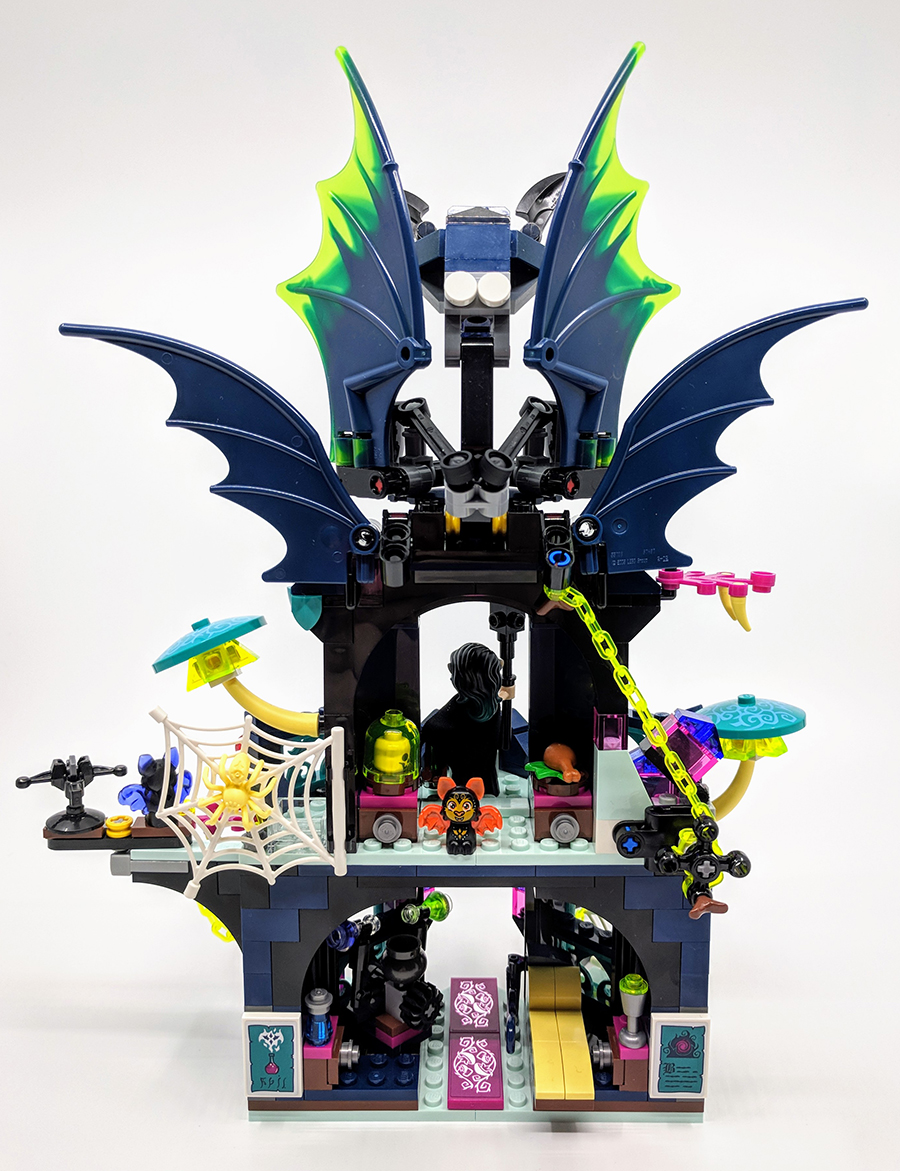 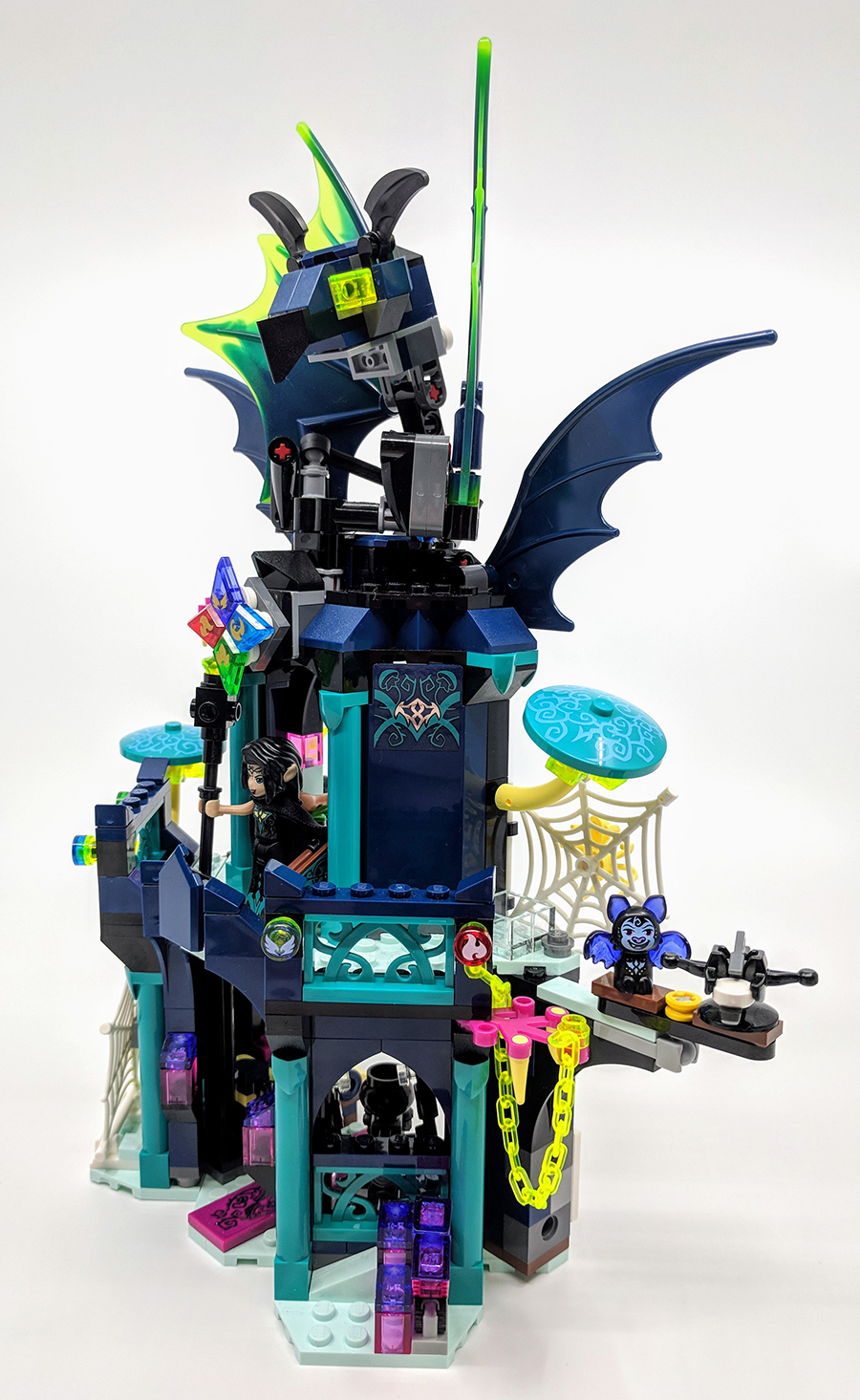 The set is filled with an impressive collection of great new and recoloured elements, many of which are exclusive to the set. These include many of the aqua and cool yellow pieces, which haven’t been used in many other sets. Plus there are a couple of completely new elements such as the Elemental diamonds, which are mounted above the doorway to the tower and can be mounted upon Noctura’s staff. As previously stated the Elves sets have a knack of featuring rare parts often making the debut in certain colours for the first time. 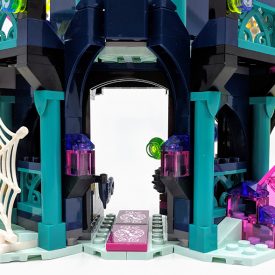 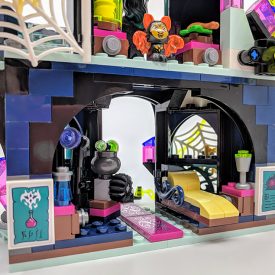 One of the most impressive parts of the set, is the imposing bat deity which sits atop the Tower of Shadows. This can be opened by twitsing a chain connected to a simple Technic heavy section. The two larger wing elements can be closed down to form a sleeping bat or spread out to reveal the towers balcony. Despite the Technic peices looking a little ugly, the play functions they allow is great. There are two mini-dolls included in the set, both of which are exclusive. Noctura is a brand new character introduced to the LEGO Elves world this year and she is one of the best mini-dolls ever released. Her darker colour scheme matches her evil intentions and also provides a highly detailed character. Her print detail is amazing and she also has a great dual-coloured hairpiece. Farran has appeared elsewhere in past Elves sets, but the version included here used new legs and torso parts not seen before. As with all new LEGO Elves sets, the collectible Shadow Bats make another appearance. The set includes two Shadow Bats, the orange coloured Hippo, who is exclusive to set 41194 and the violet-tinged Molo, who can also be found in set 41192: Azari & The Fire Lion Capture. These are fun little new elements, which will have little use beyond the theme, but they are bursting with character and make a fun little collection, if you have them all. Plus they will have a bigger part to play when the final two LEGO Elves sets are released next month.

Turns out bigger is better and this is definitely the best set of the range. Not only is it fun to build, it’s got some fun play features and an amazing selection of parts, not only rare but useful. The set also has the best mini-doll, not only in this range of sets but across all sets to feature mini-dolls. Noctura has it all, great print detail, nice accessories and unique pieces. Admittedly the set is not without it’s issues, this mainly falls upon the Earth Fox. Again the brick-built creatures is a little underwhelming. There’s just tiny things with make them look odd, but then it’s also difficult to say how things could be done differently. Despite that the set really is one of the best to come out of the Elves theme. It’s not until you build an Elves, Friends or similar set, do you appreciate them and their use of parts. For many the inclusion of Mini-dolls and their apparent focus towards female builders instantly causes them to be inferior LEGO products. That’s really not the case, if you see a set you like regardless of which theme it’s from, give it a build and expand your creative point of view.