For many years the LEGO® shops found in LEGOLAND parks and Discovery Centres, have offered a variety of LEGOLAND exclusive products. In the past couple of years, these have expanded to include sets based on aspects of the parks. So there have been sets based on the Driving School, Fire Academy and even a set based on the wider park. The most recent set in the LEGOLAND exclusive attractions range is based the popular NINJAGO World ride. As one of the newer attractions to come to LEGOLAND parks, the on-rail ride tasks you with summoning elemental powers to take on various foe. But can a LEGO set capture the fun of the ride? LEt’s find out in my review of the LEGOLAND NINJAGO World set. 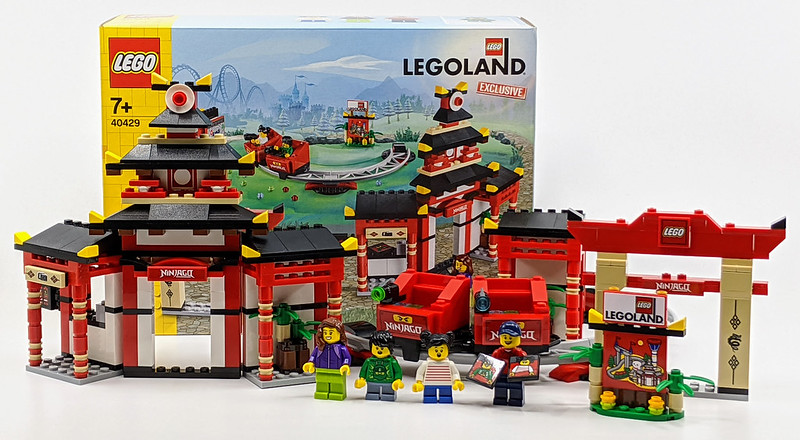 Inspire kids to build their own replica version of the LEGOLAND® NINJAGO® World ride. It’s packed with amazing details just like the real thing. Check out the entrance façade, roller-coaster with cool shooter function and screens with sticker detail for target practice. Only available at LEGOLAND. The set includes a LEGOLAND park map accessory and 4 minifigures for role play fun. Minifigures include a LEGOLAND employee, a mom, boy with a unique NINJAGO hoodie and a girl with face decoration. 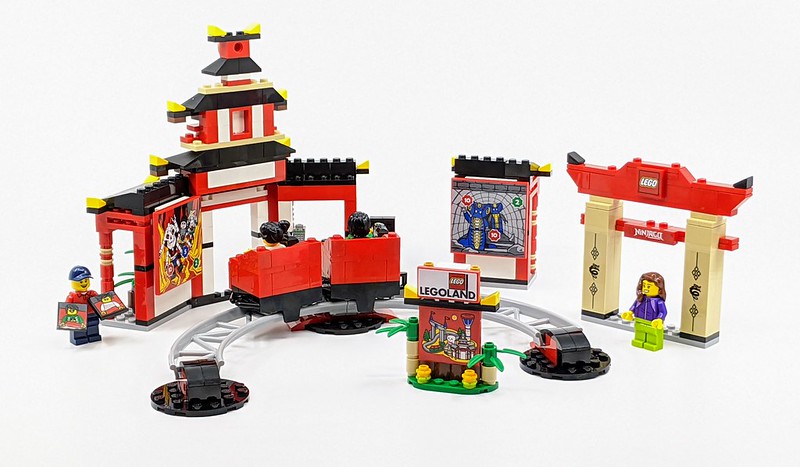 The NINJAGO World ride is a fairly new addition to most LEGOLAND parks and features a mixture of technologies to create an immersive experience. After taking a stroll through a NINJAGO themed area, you enter a temple-like building, which houses the ride. Riders then don a pair of special glasses and take a seat in an on-rail pod. This then dashes through a series of 3D screens. Riders then use their hands to cast elemental powers at the on-screen bad guys. It’s basically an advanced version of the theme park on-rail shooting games. So as a mostly enclosed ride, it’s not the easiest thing to translate into a LEGO set. 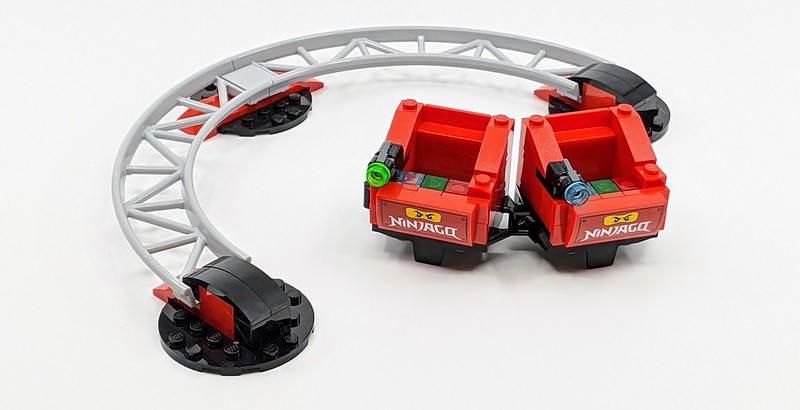 The set features the main entrance building, the familiar entrance gate, a LEGOLAND park map and of course the on-rail ride. This is made from the new roller coaster track, with two curved sections of track connected together. A couple of coaster cars form the basis of the pods which zoom around the attraction. These actually look almost identical to the real versions. The sensor sections are replicated simply with a couple of coloured trans 1×1 plates. Each cab also features a stud shooter, with a handful of studs which can be fired at the targets. 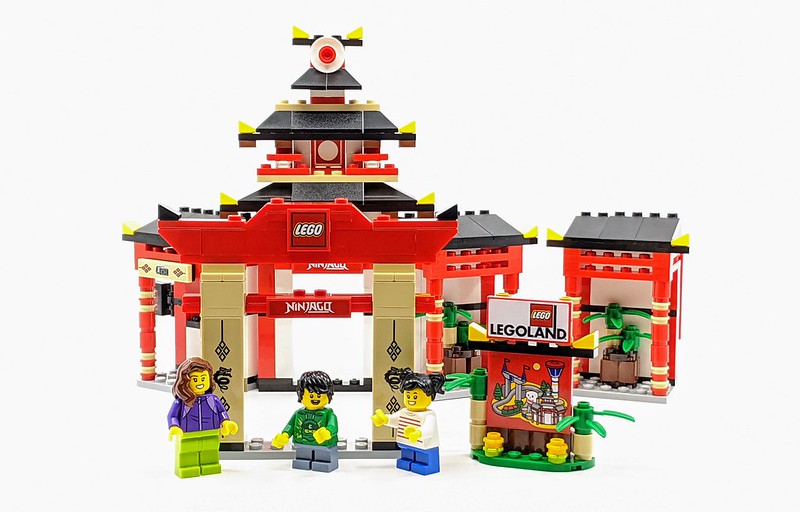 There are two screens featured in the set, both of which are mounted on the back of the main buildings. These feature two classic NINJAGO villains – the Anacondrai and the Skulkin. These are both stickers, as are all the graphic details in the set. They would be better printed but most of the other LEGOLAND sets also include stickers. 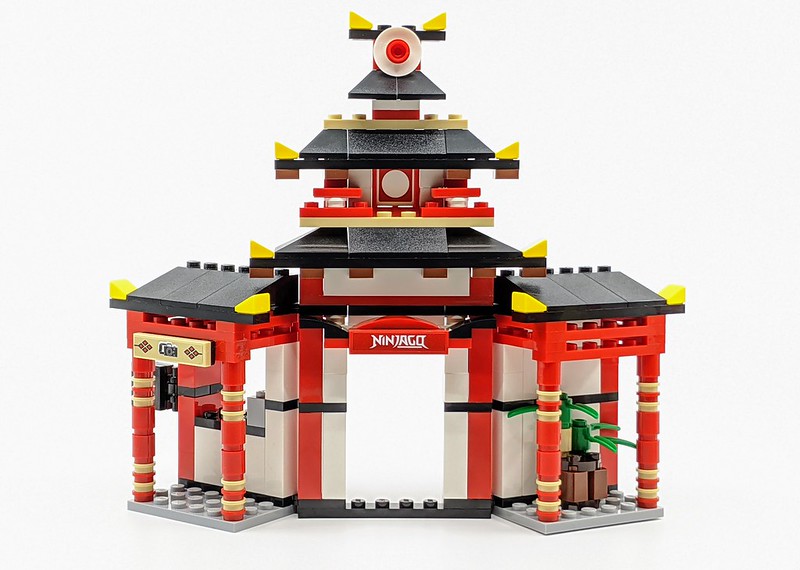 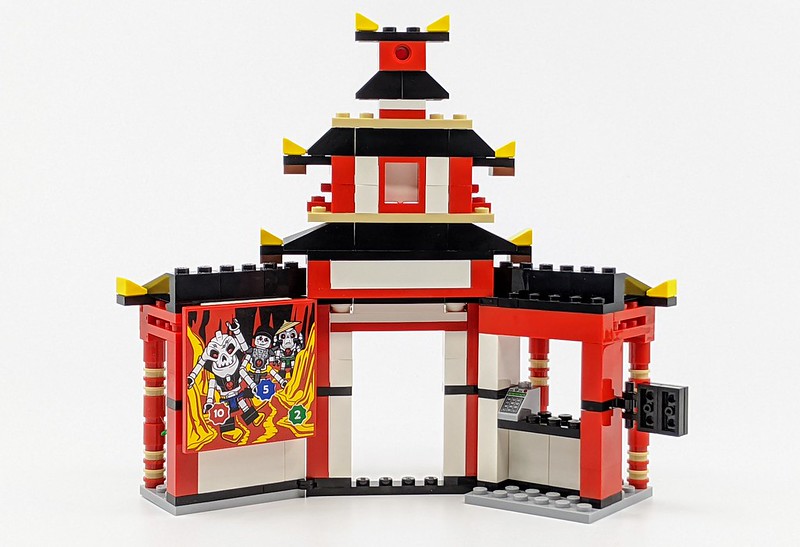 The main building has all the visual traits associated with eastern temples and is also home to a small ride photo stand. There is also a small LEGOLAND park map, which features an image of the LEGOLAND Park playset. There isn’t really any set way to put all the pieces together, and despite the various individual sections it manages to capture the overall feel of the ride.

For all those Minifigure collectors out there, the set features four Minifigures, one of which includes an exclusive Lloyd fan torso. This is worn by the young boy character, who is joined by a young girl, an adult female and a male LEGOLAND park employee, who also has a cool LEGOLAND torso. Both of the kids have great double-sided expressions, which clearly show off their excitement. 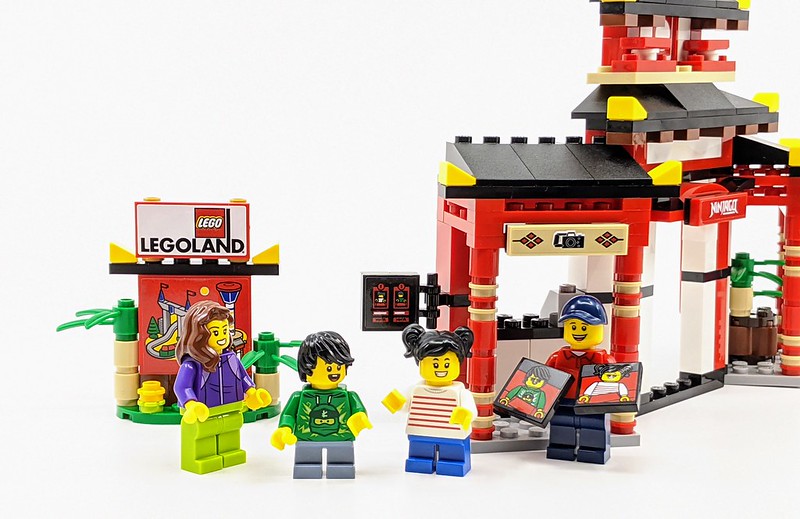 The LEGOLAND exclusive sets are oddly priced, especially the large LEGOLAND Park set, which I still do not think is worth £130. But I’d say this is fairly priced for what you get, there’s a good amount to build, some great Minifigures and the set represents the actual ride really well. You’ll find an expanded version of the set, which combines two of them to create a larger ride. This does look a little more like the ride, but I’m glad we didn’t get the equivalent of two sets in one box as it would certainly have been overpriced. The set would look great with other LEGOLAND park sets and indeed other fairgrounds sets from the main LEGO ranges. You’ll be able to pick the LEGOLAND NINJAGO World set in LEGOLAND and Discovery Centre store once they are fully open. Certain countries can also order the set online using the links below.