The LEGO® Ideas platform has resulted in some rather unique set over the past few years. Set such has 21305: Maze, 21301: Birds and last years huge 21309: NASA Apollo Saturn V. As we head into 2018 the first release from LEGO Ideas, could the most unique and visually stunning set yet. In fact the Ship in a Bottle set is one of the most unusual LEGO sets ever. Taking the maritime tradition of building a ship into an empty glass bottle, the LEGO version is very much the same expect you have to build the bottle as well. With this new set washing ashore near BricksFanz HQ, we’ve been checking it out and this is our review. 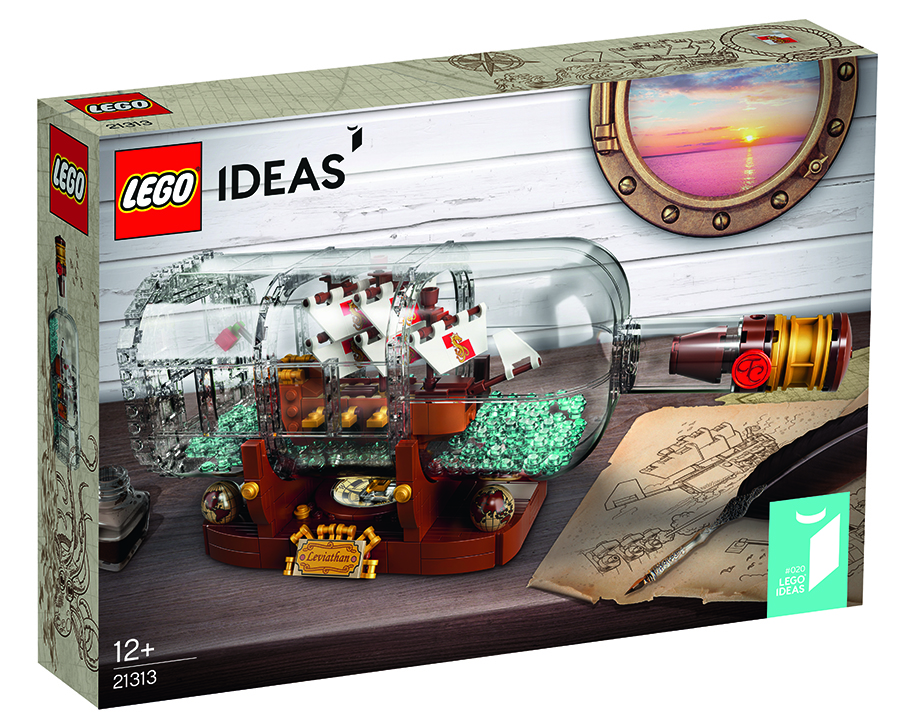 Continue a nautical tradition when you build the LEGO® Ideas Ship in a Bottle, featuring a highly detailed ship with the captain’s quarters, cannons, masts, crow’s nest and printed sail elements. Fan creator, Jake Sadovich, was inspired by an actual ship in a bottle that he had built a few years earlier when he decided to build a replica in LEGO brick form. His creation reached the qualifying 10,000 votes with LEGO Ideas.

The original project was created by fan builder Jake Sadovich and added to LEGO Idea in November 2016. It took just 48 days for the project to achieve the 10,000 supporters needed to be considered by the LEGO Review Board as a retail set. Inspired by the ships in a bottle, which were often made by homesick sailors aboard the vast galleons at sea, Jake took the essence of those and recreated one using LEGO elements. It took Jake three weeks to complete his model, then once it was live on LEGO Ideas, fellow LEGO fans liked it enough to offer it their support. In August 2017 it was officially revealed as the next LEGO Ideas set and the rest is history.

The set comprises of four numbered steps, with steps 1 and 2 featuring a single bag of elements each, step 3, nothing but trans blue studs and the final step, including two bags. You’ll also find four loose clear pieces and the all important instruction manual, which also offers a little of the backstory behind the sets creation. The set has three definitive stages which begins with the ship, also known as the Flagship Leviathan. 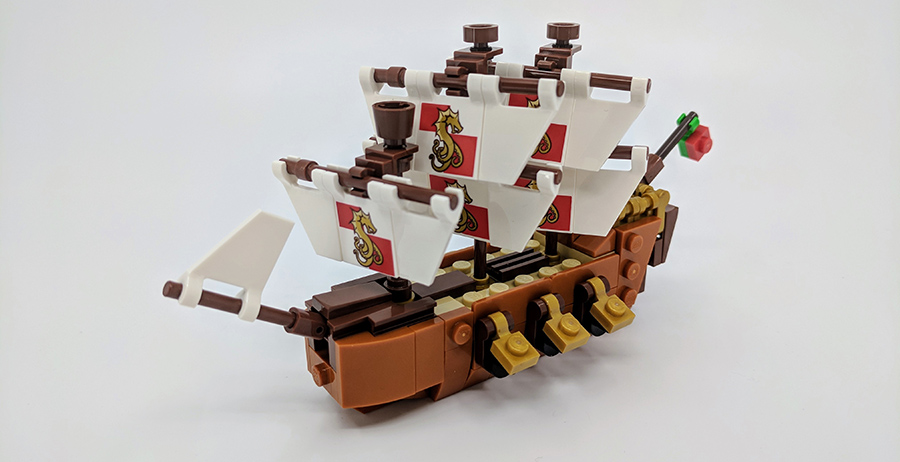 Despite its small size, this little ship features a lot of parts, most of which appear below deck, so to speak. Although it isn’t as detailed as the original project version, it still has some great little features. The little cannons on each side of the ships bow are a particular delight, as are the ships sails. These are made from a series of flag and banner pieces, some of which have a little sea dragon printed upon them. The two main sails are very sturdy but the front one is easily knocked out of place, due to its looser point of connection to the ships deck. 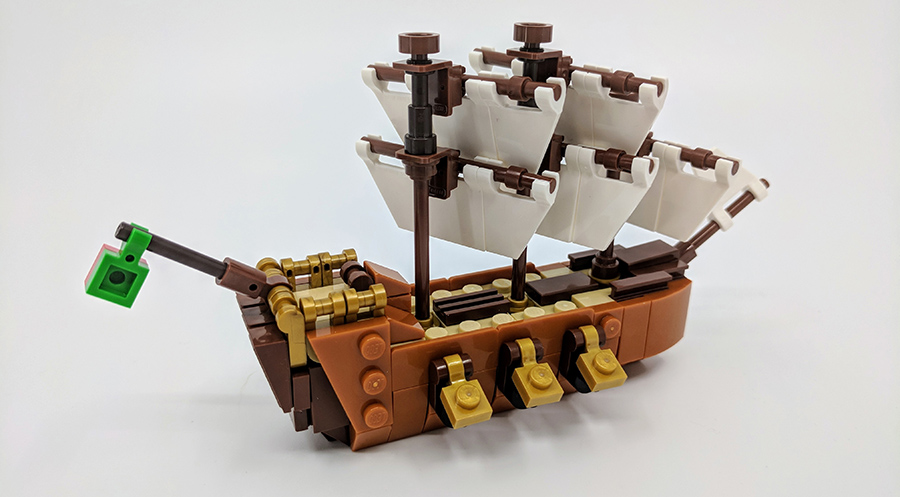 Once the ship is complete it’s time to hit the bottle and all those clear trans pieces. The base of the bottle uses a lot of pieces and when you first start putting them together, the section feels a quite flimsy. Even after a few more elements are added, it still feels a little weak, but as soon as those side panels elements are added, it is surprisingly sturdy. It may not look very bottle like, due to all the connections, but I quite like seeing all those pieces in this way. 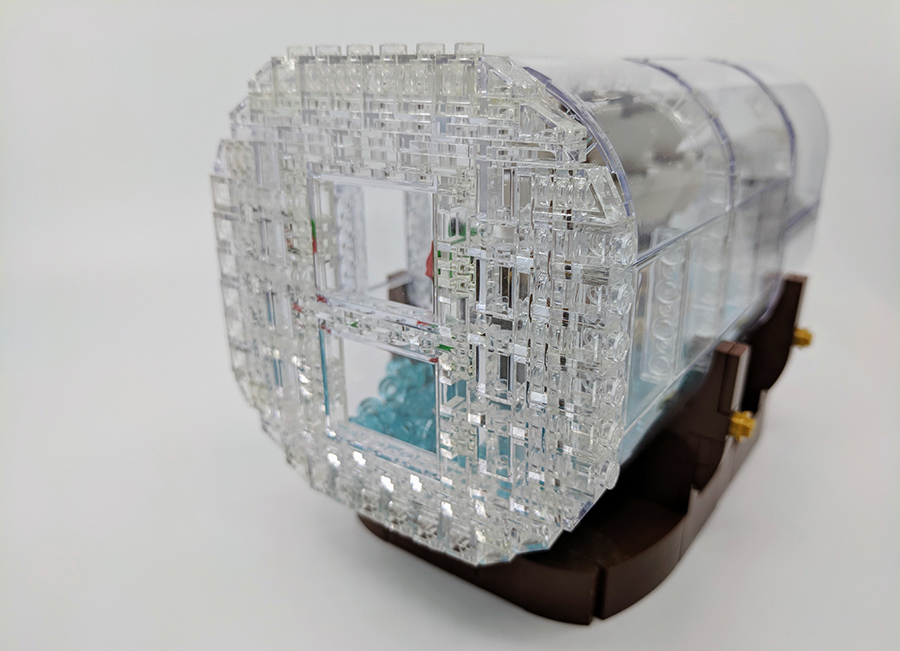 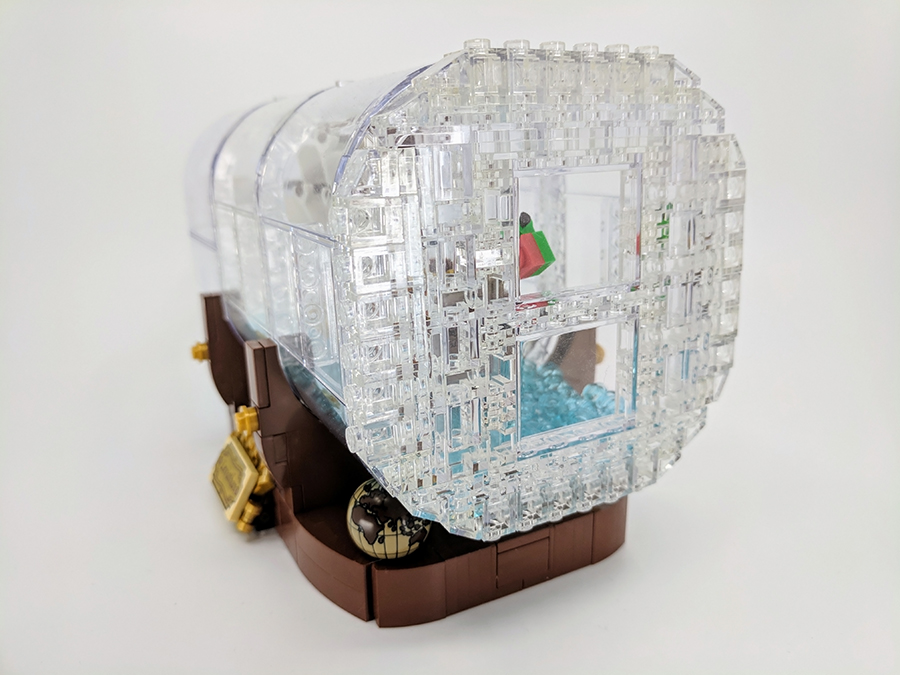 The sides of the bottle are a little clearer and mainly use trans clear panel sections, you don’t see these too often these days but I remember them fondly from some of my sets I had as a kid. Again these can feel slightly unsteady as you are putting them in place but are cleverly held together with just a few clear 1×2 plates. Once the bulk of the bottle is complete you have to place the ship in there before anything else. On one side of the bottle you’ll see four single stud topped 1×2 brown plates. These are used to connect the ship to the side to the bottle, it’s a shame they were not clear, like the rest of the bottle, but being coloured helps them act as a visual marker, plus they are soon hidden once the ship’s in place. 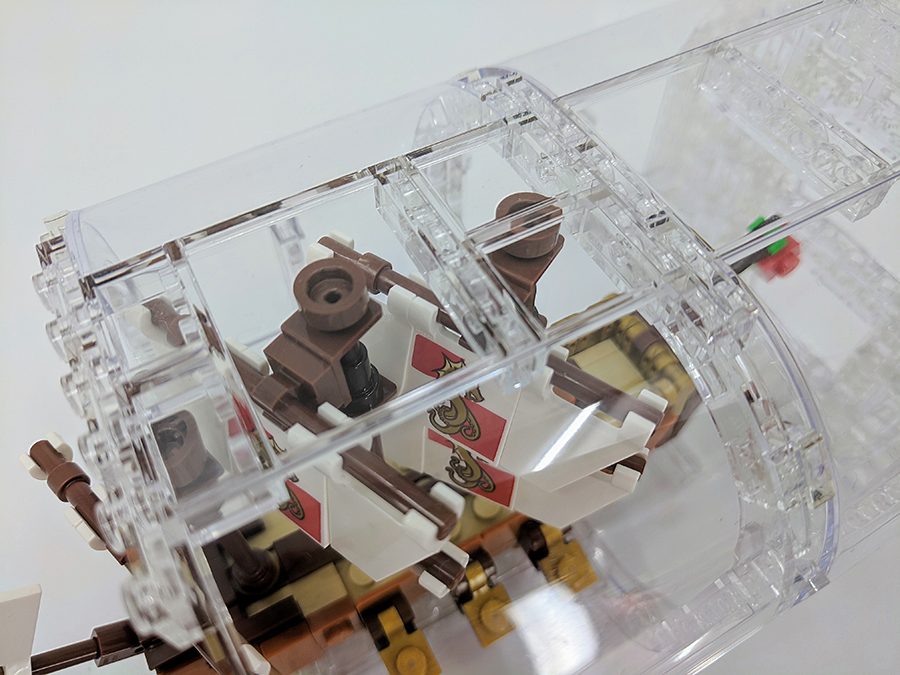 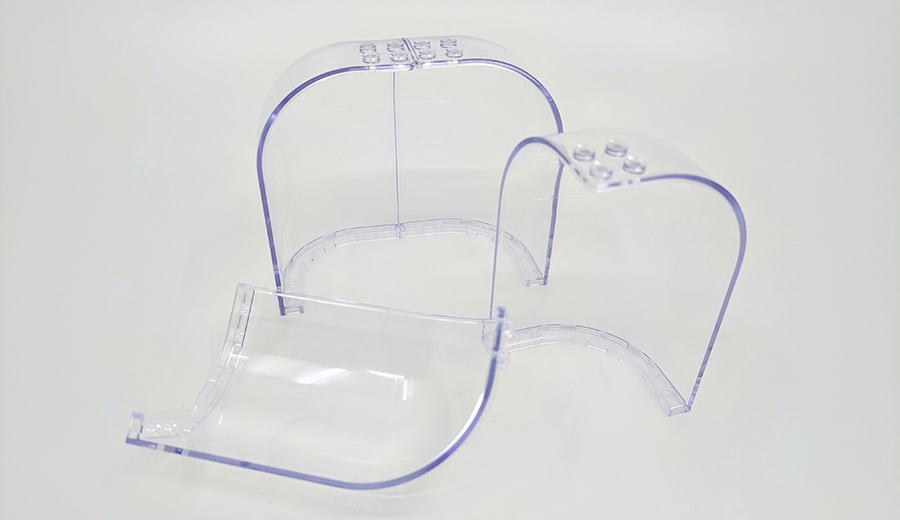 There certainly isn’t much room to manoeuvre, where the ship is concerned. It’s just about touching the surround of the bottle, with a clever little use of parts, to allow for the masts to fit snuggly. This is where that front mast become a slight issue, should you knock it even a little, off it pops and you’ll have to remove the ship fully to be able to retrieve it, don’t make the mistake of trying to tip it up or fish it out as you will most likely end up knocking even more parts of the ship away. If you’ve seen the comparisons between this the final model and the prototype from the LEGO Ideas project, you notice there is a size difference and you may be wondering why the ship is squeezed in so tightly. That may be to due to the great clear trans pieces uses to create the bottle neck. Which made seem new but are actually a really, really old element. 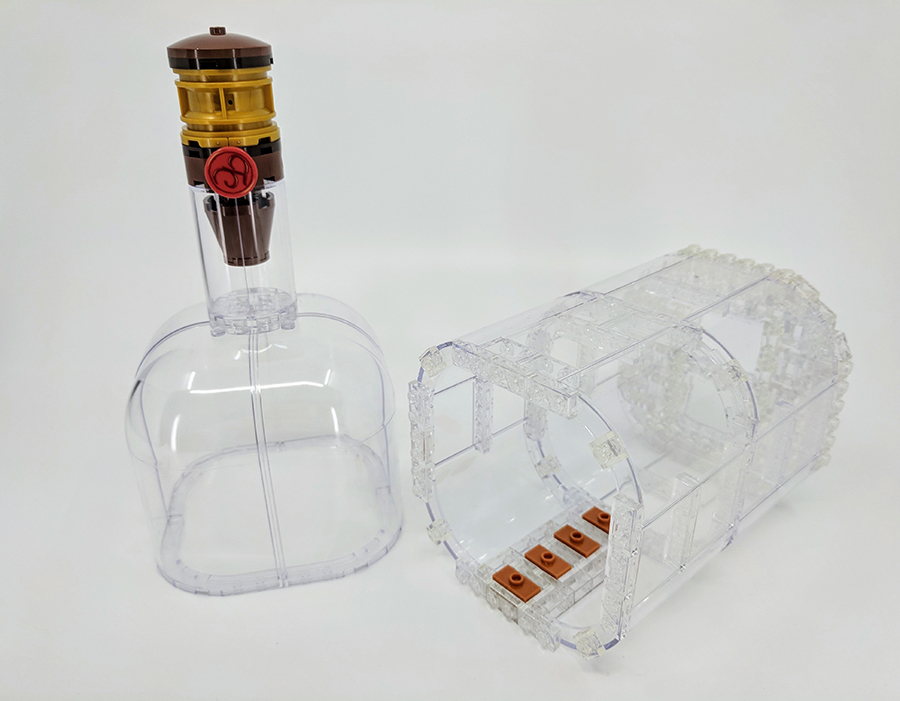 These pieces have partly dictated the overall size of the set, which I admit I wasn’t expecting it to be as big as it was. From the images I saw prior to building, it looked disappointingly small, but the whole bottle it’s just about the same size as a standard bottle of spirits you’ll find on the shelves of supermarkets. So it was definitely a surprise to see just how big the set is. Once you’ve put the ship in place and finished the side section of the bottle, it’s time to place in the 230 odd trans blue studs. Just like the original project, these are used to represent the sea and look great sitting within the bottle. Once you’ve tipped them all in there, take a moment to have a look at the set images on the box as each stud is sat the right way up, then take a moment to think you spent their time placing them all that way. 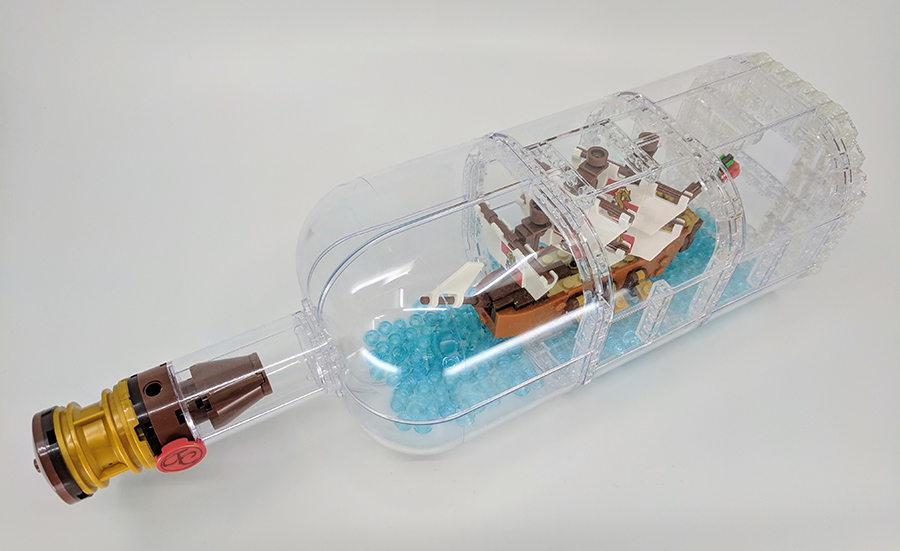 With the studs in place and the ship in one piece, it’s time to complete the bottle. Those four large pieces sit together to create the familiar neck of a bottle. They are held together with a round clear trans 4×4 disc on which the rest of the bottle is built including the stopping, that also includes a new printed 2×2 disc to represent a wax seal which features the set designers initials. Then this section can be connected to the body of the bottle. Once everything is firmly connected the complete is quite sturdy. But don’t be fooled into thinking you can easily pick it up via the thinner section of the bottle’s neck. If that becomes disconnected the four large clear will also and you’ll soon have a trans blue stud spillage to mop up. Also if the neck does become loose, be careful when reconnected, if you are a little heavy handed it’s possible you can stress them a little too much. 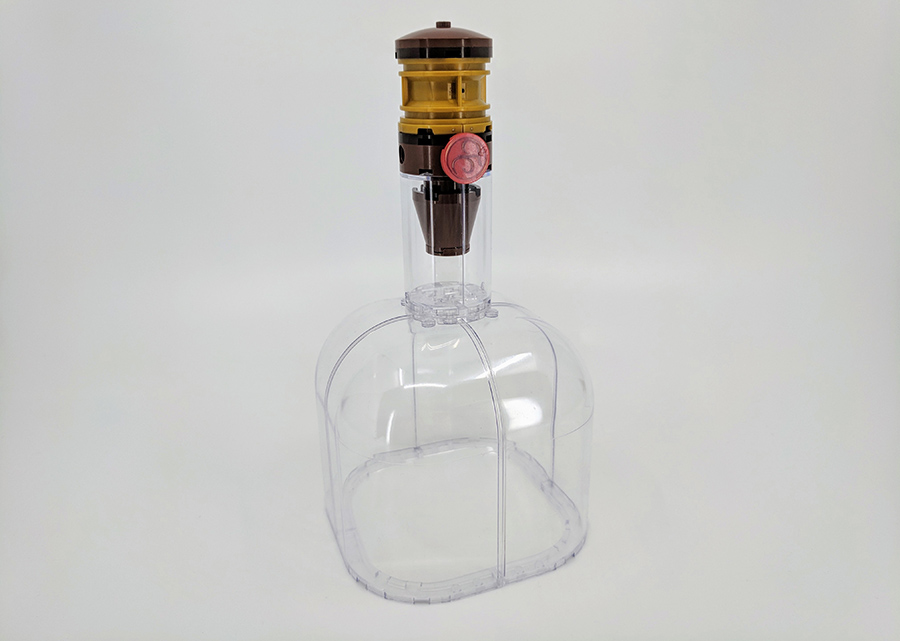 Although this end cap doesn’t really look much like a bottle cap or indeed cork, I still love that there is a stopper of sorts within the bottle, gives it a nice little bit of visual detailing. With the bottle complete, the final section you build is the ornate display plinth. As with the ship, it may not look overly complicated, but actually has a fair few elements within that small space. The display base uses mostly brown elements, to represent a wooden finish and uses clever build techniques, to offer and almost stud free finish. 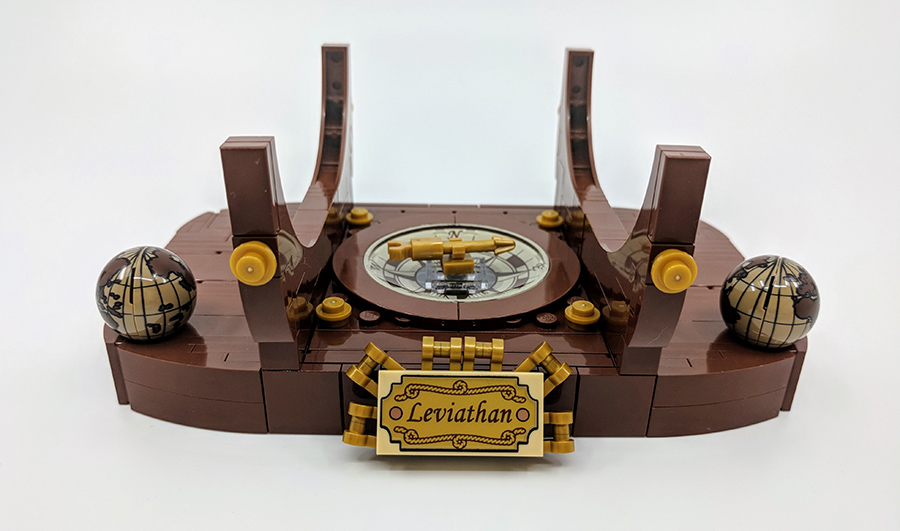 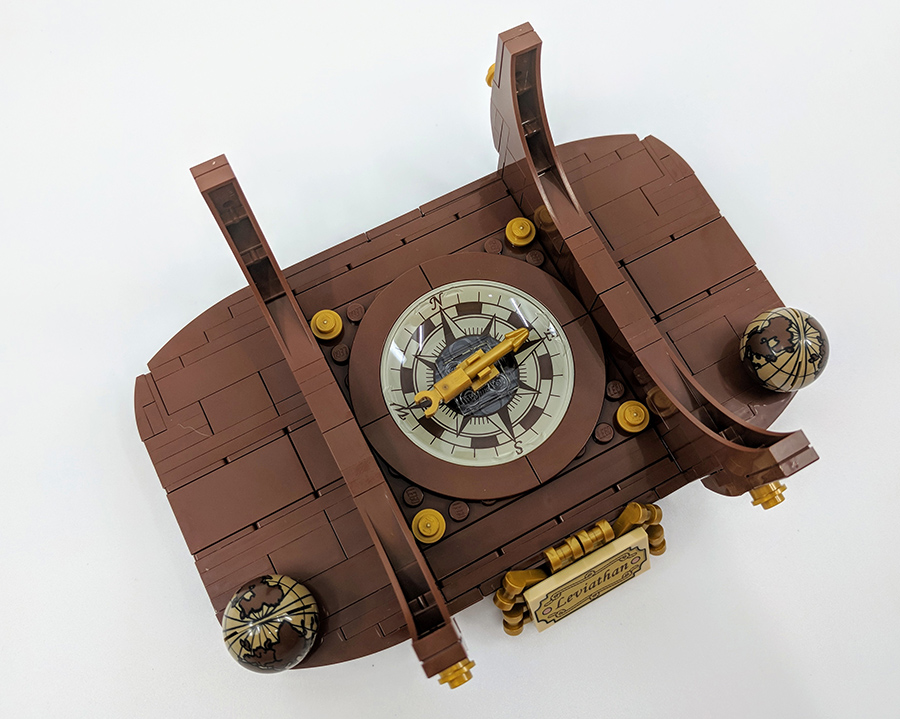 The actual base it very sturdy and includes two bowed sections best described as the ribs of a wooden ships bow, before the outer shell is added. These match the same curvature as the bottle, allowing it to sit nicely in there. Although it doesn’t connect together with any some of clutch power, the bottle is fairly well protected and shouldn’t fly off with any slight knows. It also has some great printed elements to add add even more details these include two globes, a compass face with reverse printing and a tile nameplate showing off the name of the ship. 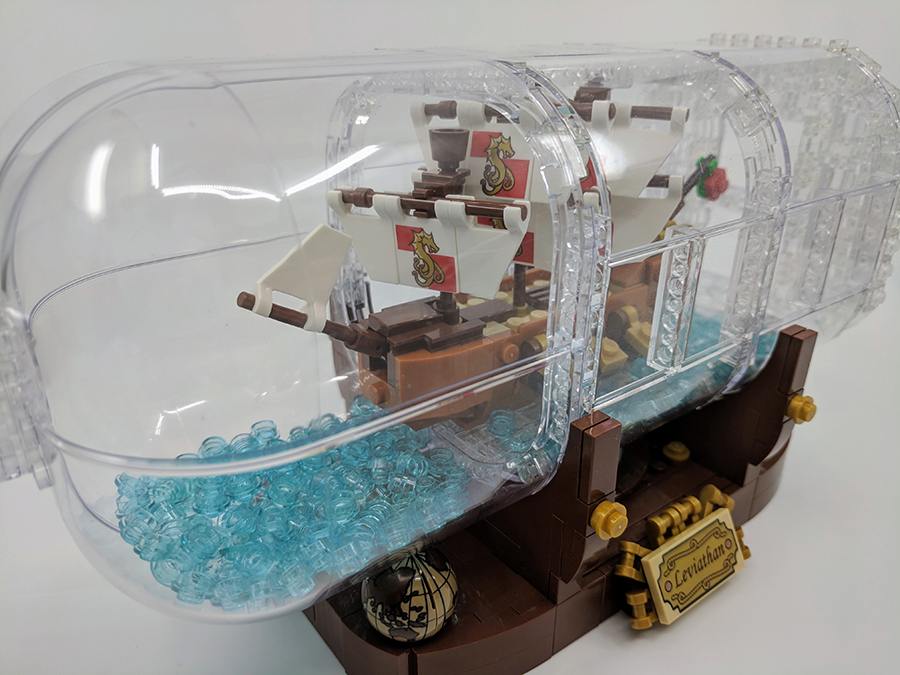 As mentioned above LEGO Ideas has provided us with a great array of sets, each vastly different from each other, but the Ship in a Bottle is by far one of the most unique and visually impressive. It’s also fun to build with some great techniques and elements used. Admittedly it’s a little daunting when you see all those clear pieces and various 1×1 elements, but has you see how they fit together that feeling soon passes. As with many LEGO Ideas sets, they often differ greatly from the original project and for some they feel cheated by different use of parts or sizing. I prefer that the final set is a little smaller that Jake’s original vision. His initial idea is still outstanding but a these more compact size makes it a little more pleasing as a display piece. I’ve already seen one review, from as large media outlet, who have questioned it play features, but I really don’t think this sort of set has been created with play functions in mind. It’s a display piece aimed more towards older LEGO fans. And trust me is an amazing piece to have sitting around on a shelf as it’s one of those LEGO creations which will impress non-LEGO fans. I’ve already had a couple of people not realise it as actually made from LEGO, which I think is testament not only to Jake Sadovich’s original idea but also LEGO Designer’s Tiago Caterino final model. 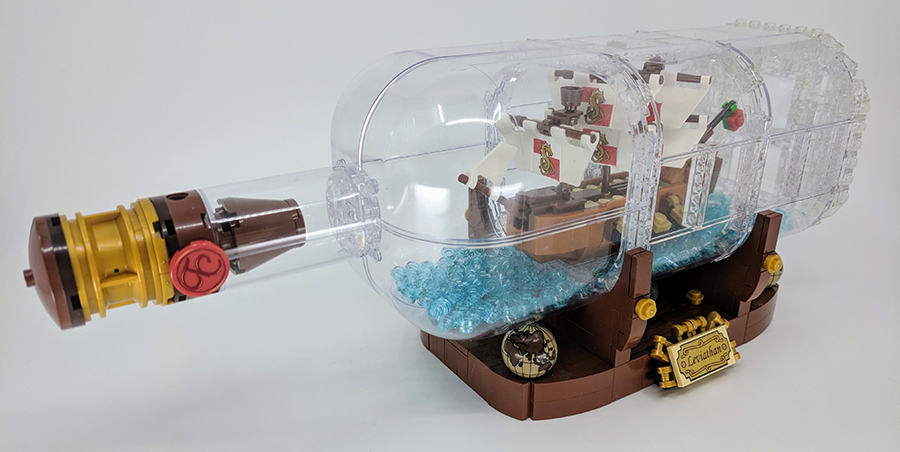 Set 21313: Ship in a Bottle is available now exclusively from LEGO Brand Retail Stores and shop.LEGO.com. Thanks to the LEGO community engagement team for sending us the set to review. The opinions express within this review are those of BricksFanz and do not reflect those of the LEGO Group.