One of the largest of the new LEGO® Toy Story sets focuses on the gangs trip to the carnival, where they meet a few new toys. Set 10770 features five Minifigures and a selection of attractions, which were first seen in the latest Toy Story 4 trailer. The Toy Story 4 sets are also part of the newly rebranded LEGO 4+ range, previously known as LEGO Junior, the sets feature unique ‘Easy Start’ elements and fully printed pieces. Which actually make the sets more attractive to AFOLs. But how does the set shape up, and should you add it to your collection? Let’s find out in my review of Buzz and Woody’s Carnival Mania. 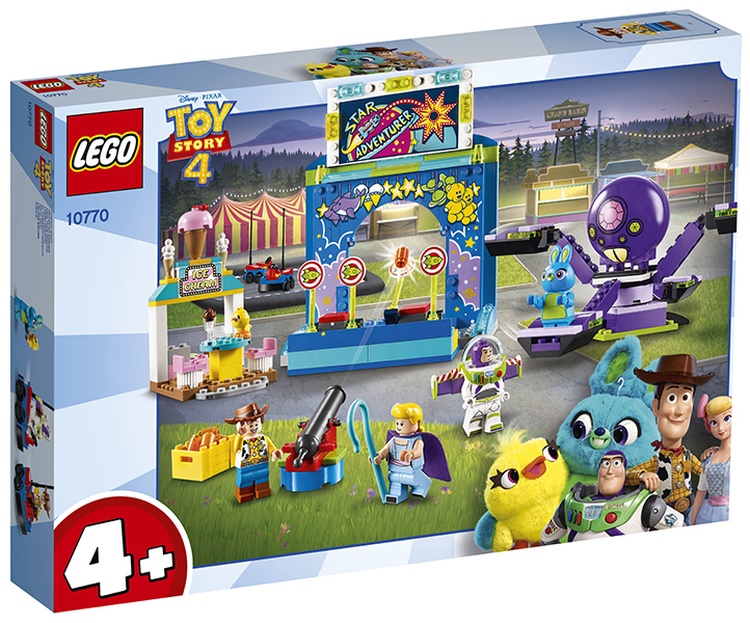 Share the excitement and joy of a carnival with your child, with Disney•Pixar’s Toy Story 10770 Buzz & Woody’s Carnival Mania LEGO® 4+ set! This action-packed play set is specially designed to be fun and easy for preschoolers and smaller children, featuring a colorful carnival shooting game with a large sign and laser cannon, plus a special Starter Brick baseplate that gives first-time builders the experience and pride of constructing buildings, vehicles and more on their own. This fun preschool toy building set also includes a spinning Terrorantulus ride with adjustable arms, 2 bumper cars with Starter Brick chassis and an ice cream shop with register, table and benches and a sign. The included simple guide to build and play will also help your young carnival visitor understand the purpose of the building steps and grow their imagination and confidence for the perfect start to easy LEGO brick building in a familiar Toy Story setting The set is made up of four different builds, which when combined create a little carnival scene, as briefly shown in the various Toy Story 4 trailers. As this is a 4+ set, it features a number of ‘Easy Start’ elements. Of all the Toy Story 4 sets, this features the largest amount of these elements. You start off by tackling the Ice Cream stand, this has the feel of a LEGO Friends set, with a similar use of colours and elements to create a fun little concessions stand. Atop the stand is an oversized ice cream cone, which uses the new elements used to create Ice Cream Cone from the LEGO Movie 2 sets. It would of been nice if the cone section had the same wafer print as the Ice Cream Cone character had. It does feature a useful printed ‘Ice Cream’ sign element. 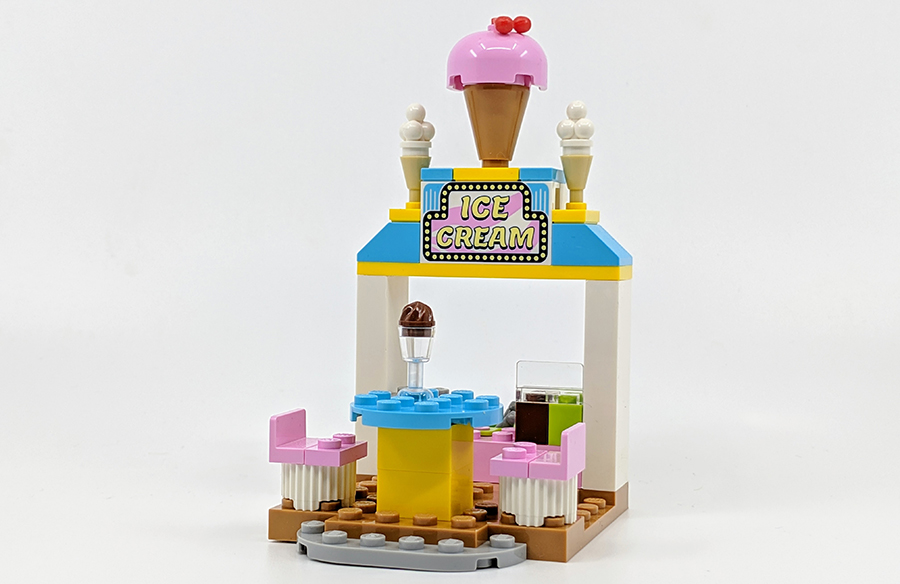 Next up are two rather cool little Bumper Cars, these are simple little builds do a great job of looking like Bumper Cars. They are around the same size as Mighty Micro set or the Bumper Car from the DC Comics Joker polybag. Speaking of which I prefer that style of build for the Bumper Car, as it cleverly hides the wheels, although it could be considered a more complex build for a set aimed a younger builders. 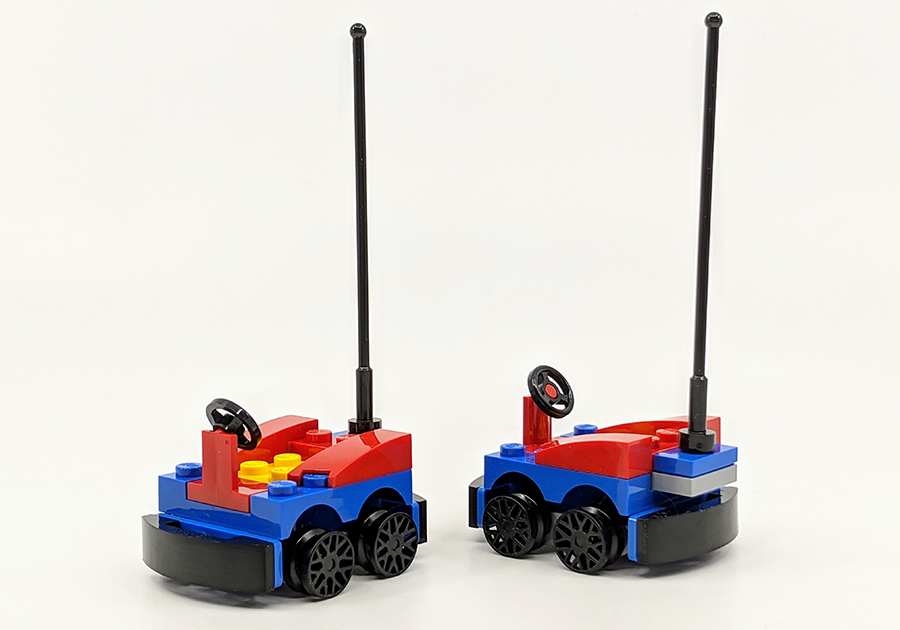 Next up is a space-themed shooting game, which are at just about every carnival or funfair in some another. These has a unique wall element, which has been used in a number of other Juniors/4+ sets, famously has the gate entrance in one of the LEGO Jurassic World. The version here features print detail to show some of the cuddly toys you can win on the game, on top of this printed plate element featuring the name of the game ‘Star Adventurer’. There’s another unique base plate element, on which that wall element is mounted and in front of that is two banks of targets, which are each on a hinge. Each target is a 2×2 round plate, which printed detail. You also get a working cannon, which features a spring loaded trigger. Which fires a 1×1 round brick, so you can actually play the shooting game, which is a rather cool little play feature. The final part of the build, is one of the coolest bits, it’s a fairground ride known as Terrorantulus, a spider-themed spinner ride. It’s certainly a lot smaller than the one seen in the trailers, but does a great job of capturing the look of the ride. The centre of the ride uses two new printed hinged domes, which when combined create a central dome to represent the head of the spider. This whole section can be spun around, including the four arms, which can be posed in different positions. 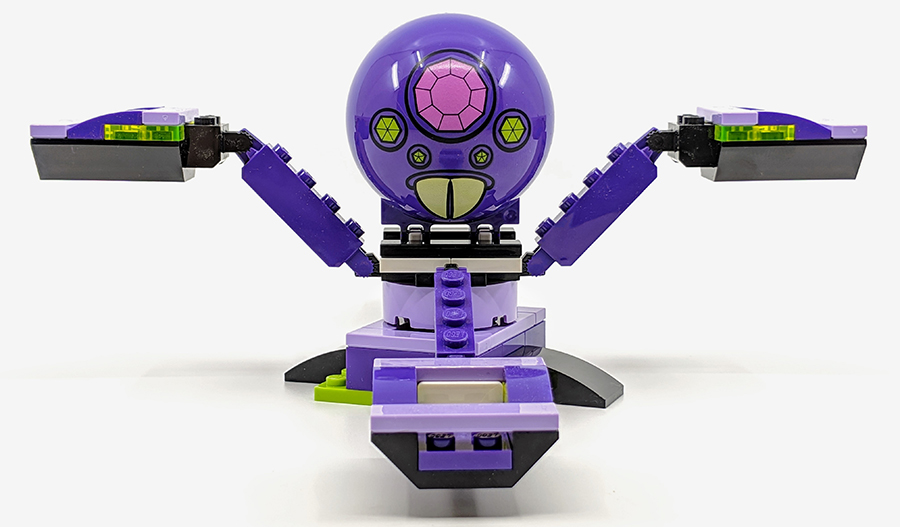 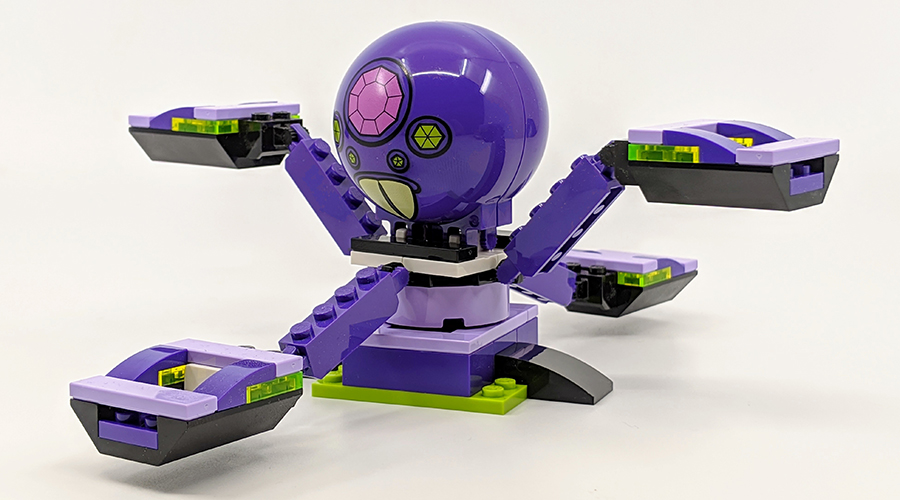 The best thing about all these builds are the printed pieces, they are generic enough to be used in other builds. So if you’re got a fairground themed display planned, this set is a must to help flesh it out and give it some character. Maybe I’m under estimating 4 year olds, but apart from the larger ‘Easy Start’ elements, the builds are quite similar to most other LEGO builds.

The set includes five main characters from the film, including two characters which are exclusive to this set. First up are three of the original characters – Woody, Buzz and Bo-peep. The set includes new take on Woody, who is now in standard Minifigure form, gone of those weird long legs and arms from past versions. Woody has a new hair and hat combo element, along with a colourful recreation of his cowboy outfit. His boots are achieved with the newish dual-molded legs and Woody has two different expressions – a smile and a worried look. Bo Peep makes her Minifigure debut, and has two new elements created for the character. These are her cool little hair piece and her shepherd crook. To help match her new look in the movie, she also has a purple cape. These is made from the new softer material but it doesn’t sit very well as her hairpiece doesn’t come down far enough to ‘pin’ it down. 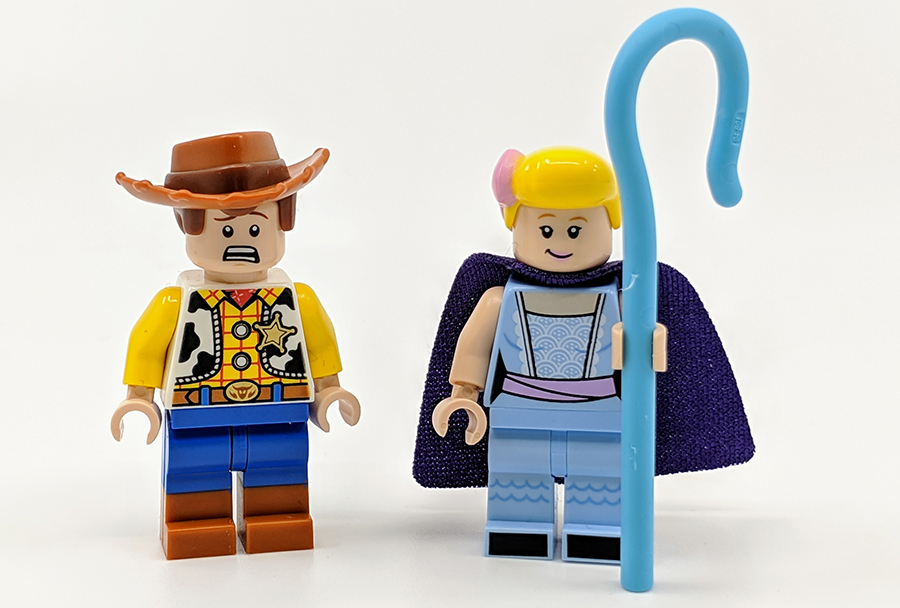 Buzz has appeared in three different forms, and unlike Woody, he’s not really changed that much from each version. The original Buzz had a unique moulded head, then in the first series of the LEGO Disney Minifigures, this was switched to a standard Minifigure head. Each version has a same sort of shoulder element and wings to achieve Buzz’s Star Command outfit. I definitely prefer the Minifigure head to the moulded one, but the Buzz included in this set suffers from poor print quality.  Check out the photo below, the Minifigure from on left is from the CMF series and the right one is from this set. There are near identical but you can see the right one has a much paler face. There should be no reason why, as the base colour of the element the face is printed on is the same. Poor print quality seems to be on the rise recently, with some of the Endgame Minifigures suffering the same fate. 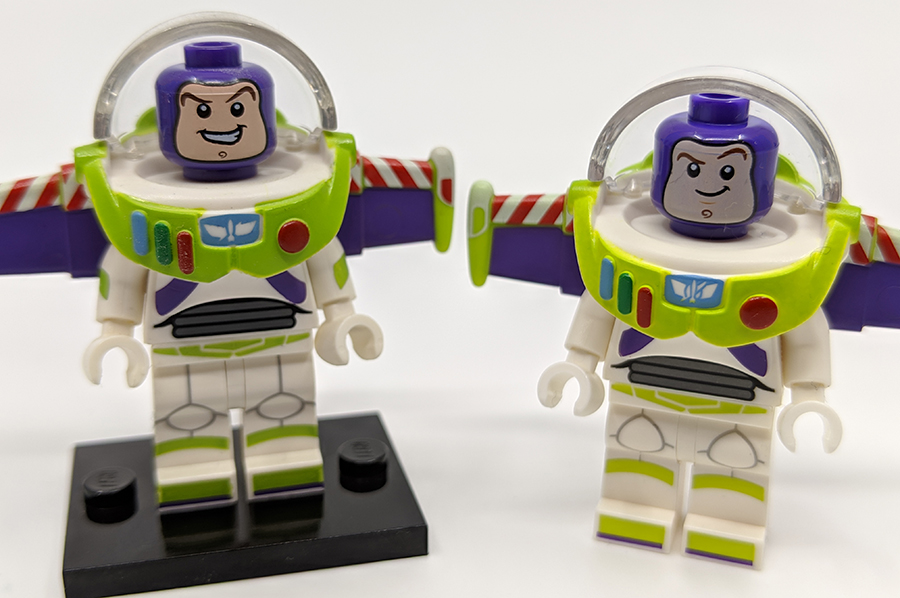 The very first teaser for Toy Story 4 featured two all-new characters called Bunny and Ducky. These both require new elements to achieve the characters look. Bunny has a unique headpiece and Ducky is a completely new element piece, it’s quite similar to some of the unique characters from the Angry Birds theme. They only appear in this set so if you want the entire line-up this is a good set to get a nice spread of characters. Although the sets are aimed at younger builders, there is actually more in them to interest AFOL and MOC builders. The ‘Easy Start’ pieces could be really useful in MOCs and the fact all the elements with graphic details are printed is pretty impressive. As mentioned above they ones featured in this set could be really useful for those who have or plan to create a fairground layout. Especially with all the fairground rides coming out this Summer. I like the Minifigures included in the set, particularly Bunny and Ducky. However it’s a shame that Buzz has poor quality print detail. I genuinely hope that the 4+ range continues, has it has been the source of some pretty cool little sets, and this is one of them.