They say Rome wasn’t built in a day and if there was ever a LEGO® set to embody this notion then it’s this one. The Colosseum has stood in the centre of Rome for almost 2000 years. In its heyday, this impressive Roman amphitheatre could hold up to 80,000 and now it has the honour of being the largest LEGO set yet. If you thought the latest version of the UCS Millennium Falcon was big, you ain’t seen nothing. The LEGO Colosseum is just over 9000 pieces, dwarfing the Falcon by nearly 1500 pieces. Unsurprisingly the set is part of the 18+ range and rightly so because it’s a beast of a set. But do all those elements make for a good build? Here’s my review of set 10276: The Colosseum. 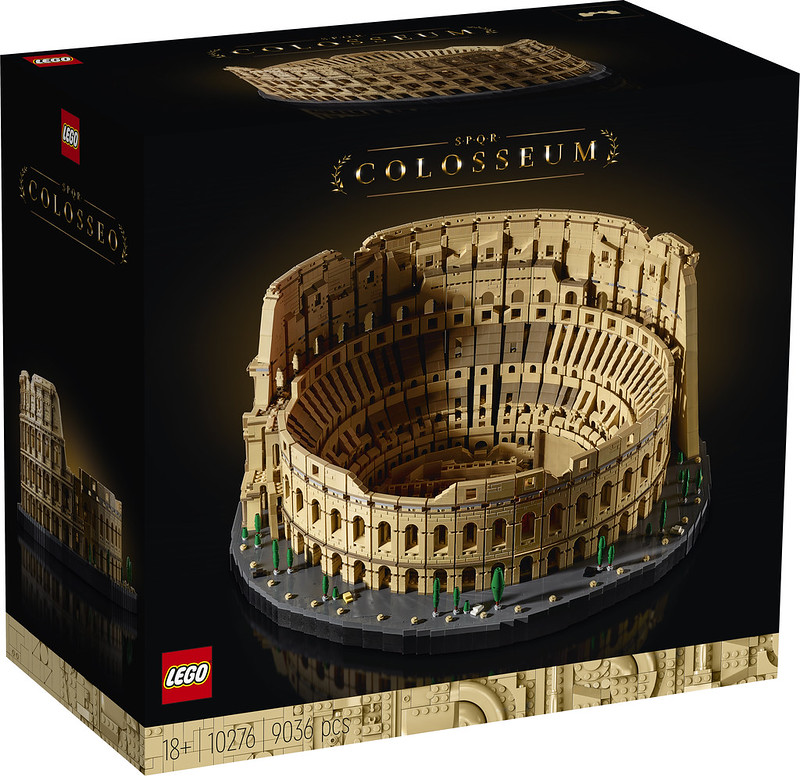 Nowhere on Earth compares to the majesty of the Colosseum of Rome. So, get ready to escape your everyday life as you take on the biggest ever LEGO® build (as at November 2020) yet. This epic 9,036-piece Colosseum model depicts each part of the famous structure in great detail. Authentic detailing shows the northern part of the outer wall’s facade and its iconic arches. The model features 3 storeys, adorned with columns of the Doric, Ionic and Corinthian orders while the attic is decorated with Corinthian pilasters. 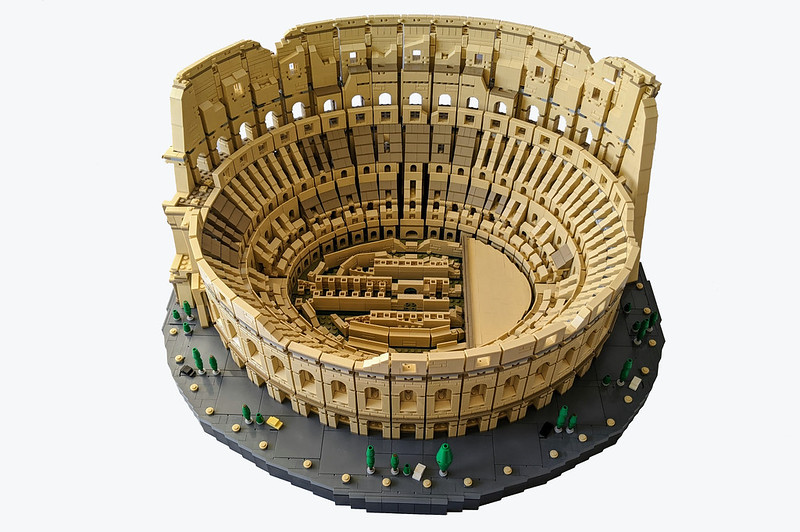 As you’ll expect from the biggest set ever, the box is huge and within it, you’ll find four additional boxes. It’s basically the equivalent of four fairly large LEGO sets in one huge box. Each box represents a different section of the Colosseum. Stage I is focused on the base, with the other boxes creating the complex ruins of the amphitheatre. Each box has its own fairly thick instruction booklet, and along with the build steps they also offer historical facts about the Colosseum. This is a great touch as it adds to the overall experience of the build. 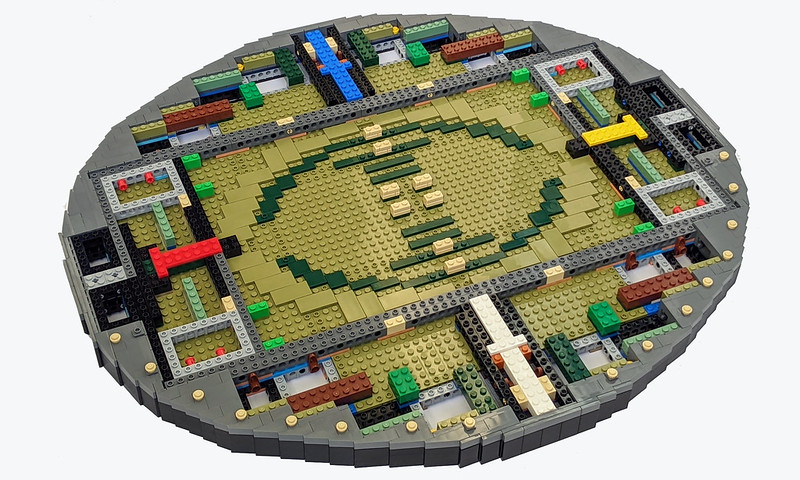 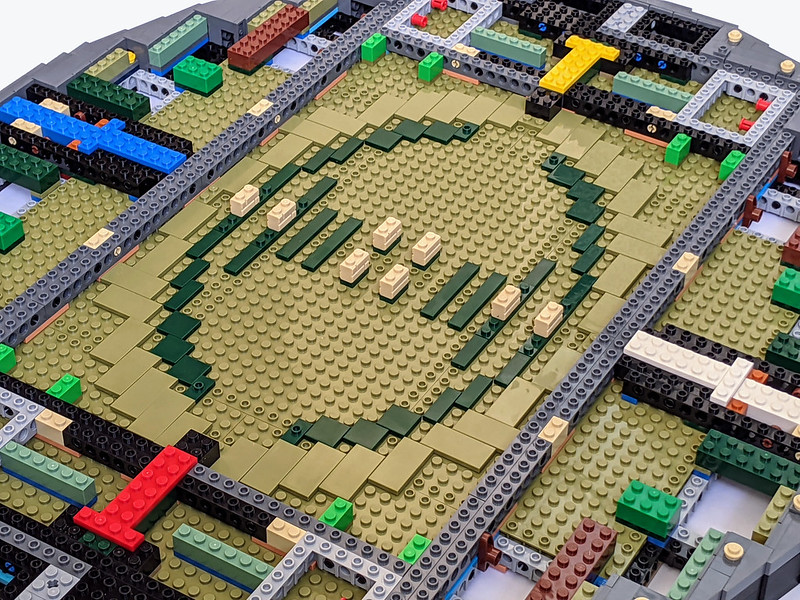 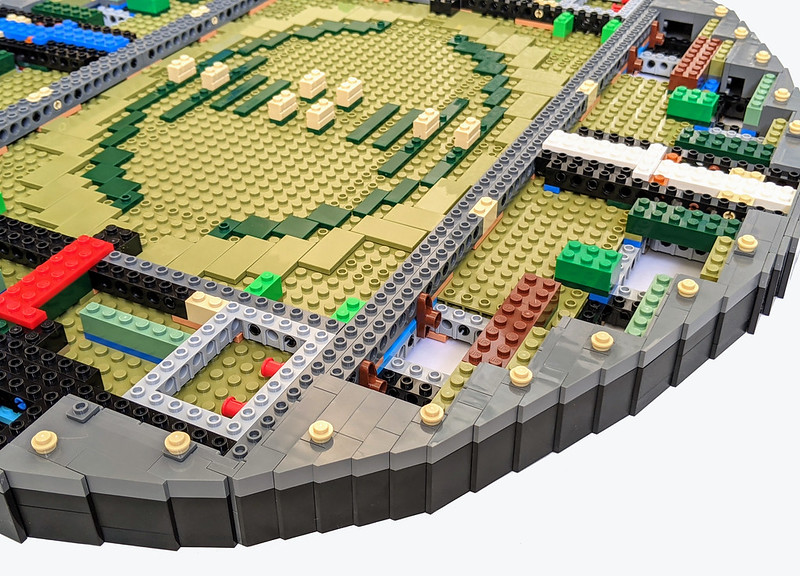 The epic quest to recreate the Colosseum begins with a tapestry of the new brick plates. These were introduced for the LEGO ART range and are far sturdier than baseplates. The 16×16 panels have a similar surface to baseplates or other larger plate elements but are also one brick high, with a series of Technic pinholes along each edge and standard stud connection points underneath. These appear in olive green, marking the second colour for these useful new pieces. They are combined with various other elements including four groups of primary coloured sections, which help with the placement of other sections of the amphitheatre. 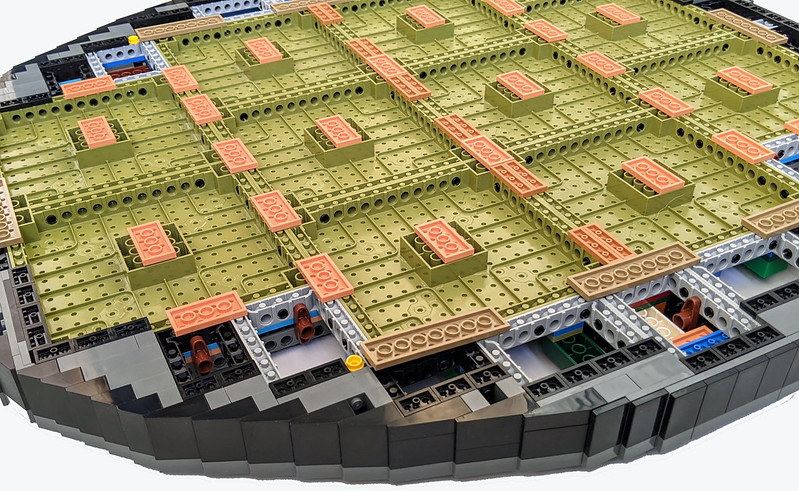 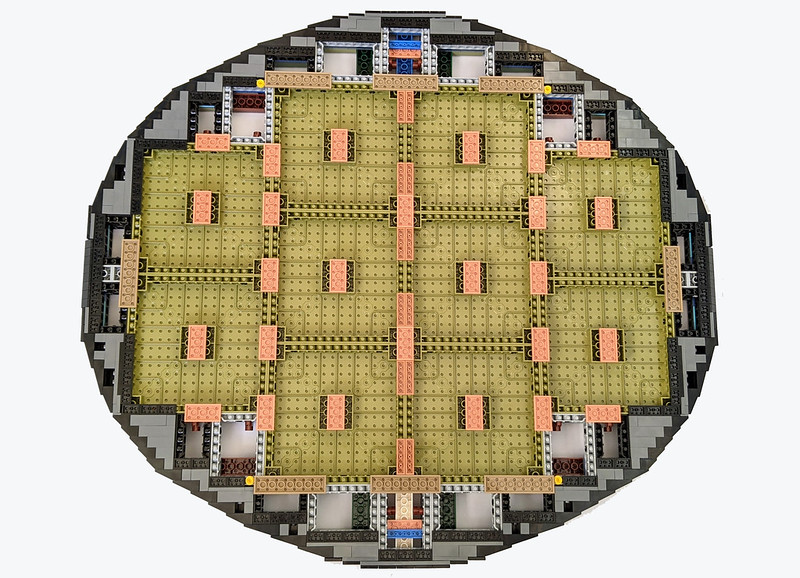 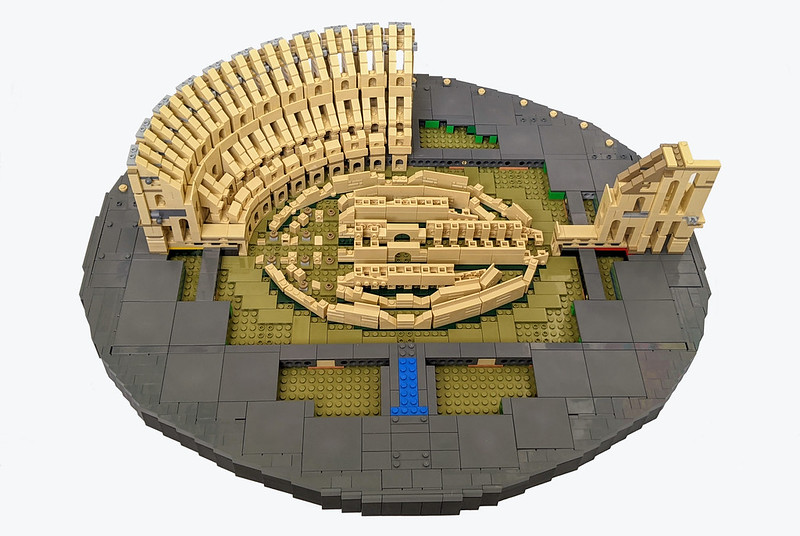 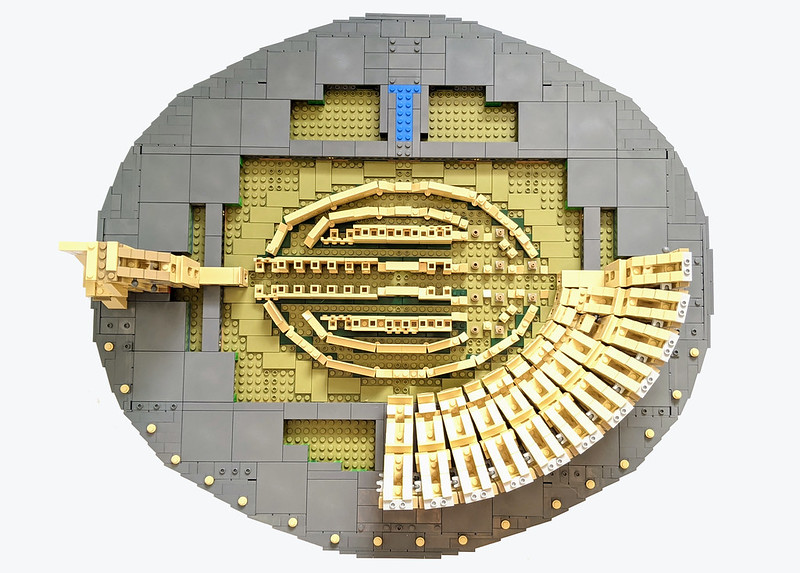 Much of the base section is covered up with a mixture of flat grey plates, tiles and jumper plates. The central section is partly open making use of those olive green brick plates to represent ancient ruins of the hypogeum of the Colosseum. Which would have housed the hidden workings of the amphitheatre, such as sewers, animal pens and workers dwellings. You’ll then build a few smallish sections of these ruins found within the walls of the Colosseum. But even at this point, you are not even a quarter way through the build. 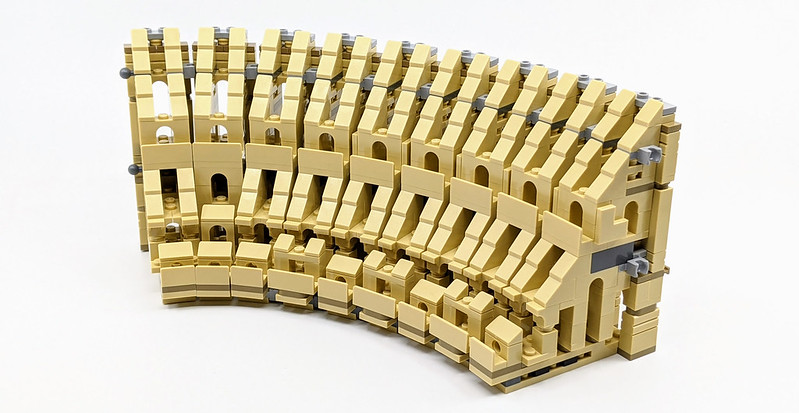 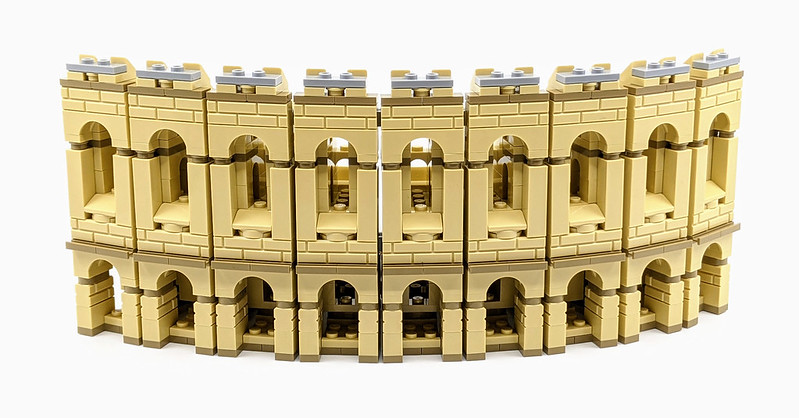 To achieve the iconic curved walls of the Colosseum, it’s built-in rib-like struts. Apart from a couple of single section ‘ribs’, much of the outer walls of the Colosseum are built and connected to the base independently. Those coloured sections mentioned above are where you connect one of the four anchor ribs. You then connect additional sections via a series of ball and joint elements. I will say you really need to pay extremely close attention as you build because one wrongly placed element is a nightmare to rectify. Although the wall sections are fairly stable, they are still easily disturbed should you need to start taking them apart. Making a slight mistake is easy to do as those numerous ribs are fairly similar in the build style. In fact, it can be a little monotonous, although there are slight differences between these wall sections, they are extremely similar. 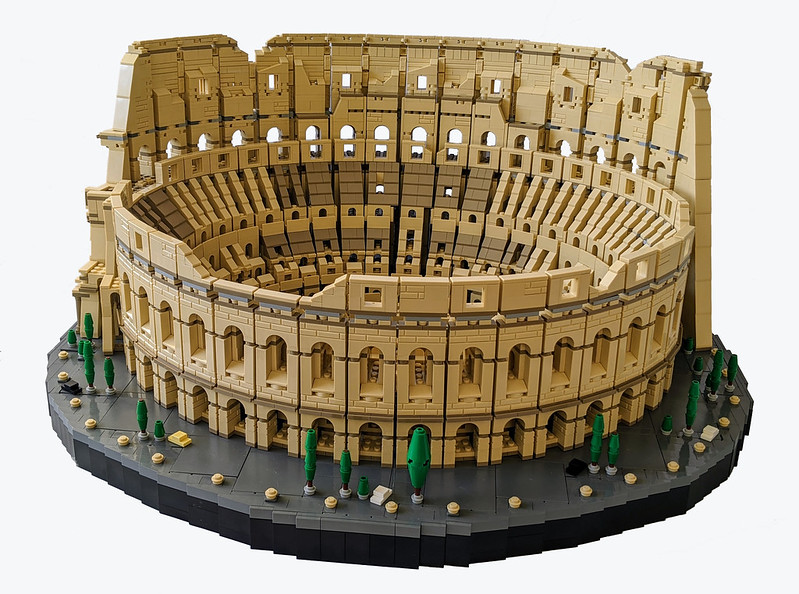 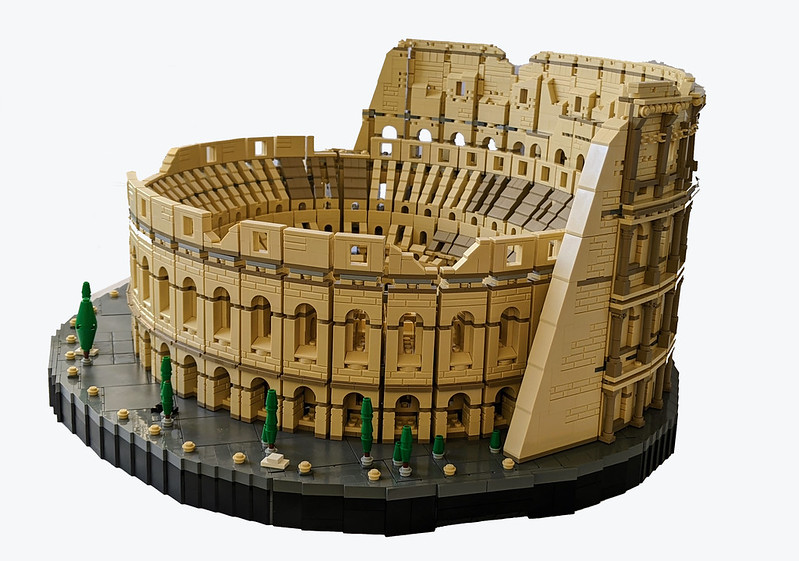 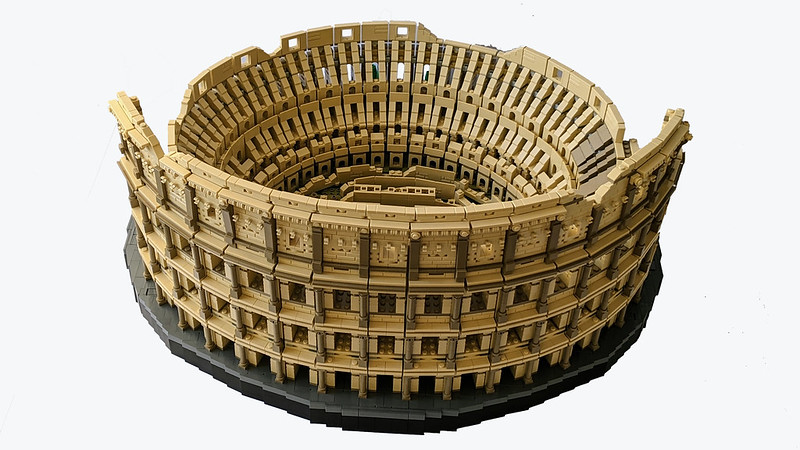 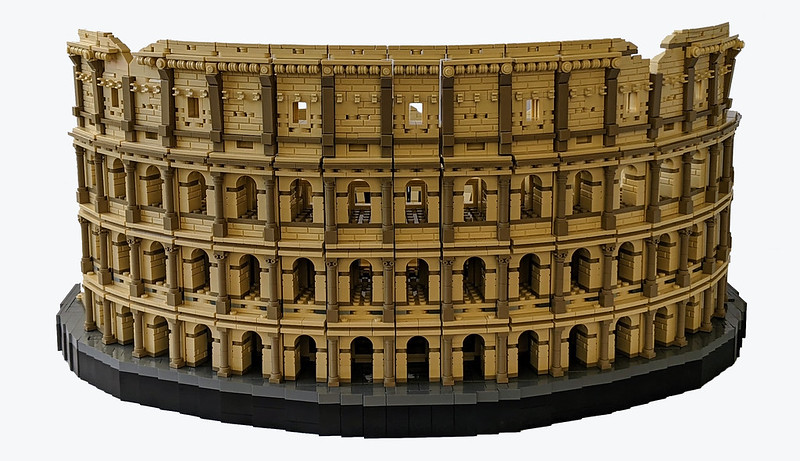 In basic terms, the build has five distinct sections, the base and four sections of the outer wall. As the landmark has crumbled over time, one side is lower than the other. Meaning the last couple of sections have much more building involved compared to the other sections. This also allows different elements of the ancient architectural flourishes to be incorporated across different sections. Some of the most fun of these are candlesticks and roller skates used to recreate the columns so often associated with Roman structures. There are also small sections of the build which used different coloured bricks to break up the mass of brick yellow or tan. 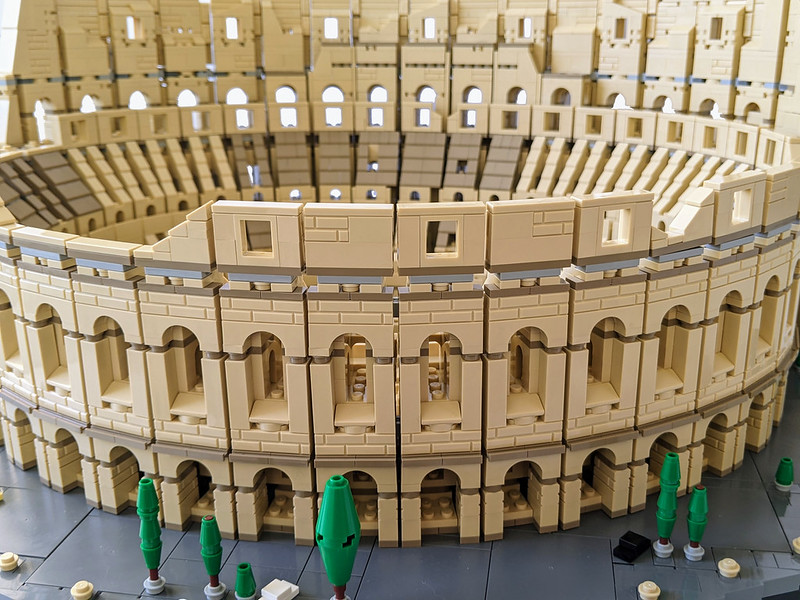 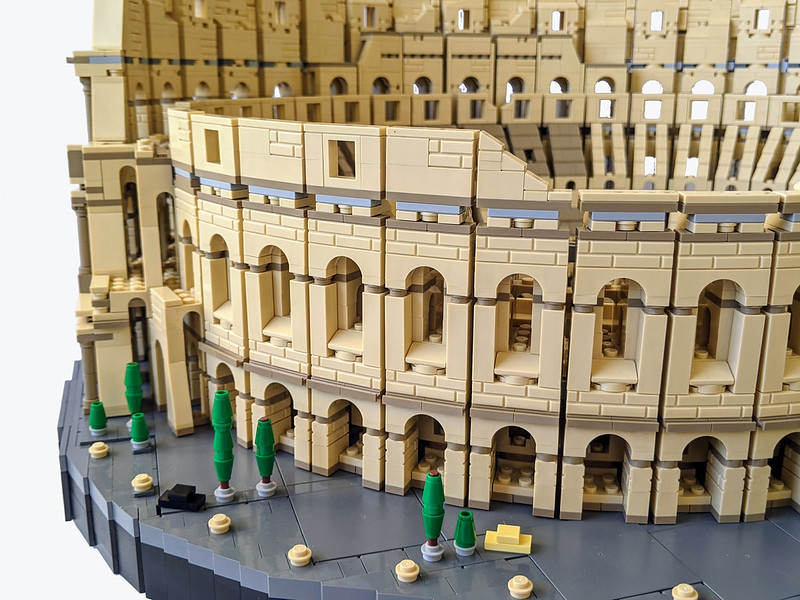 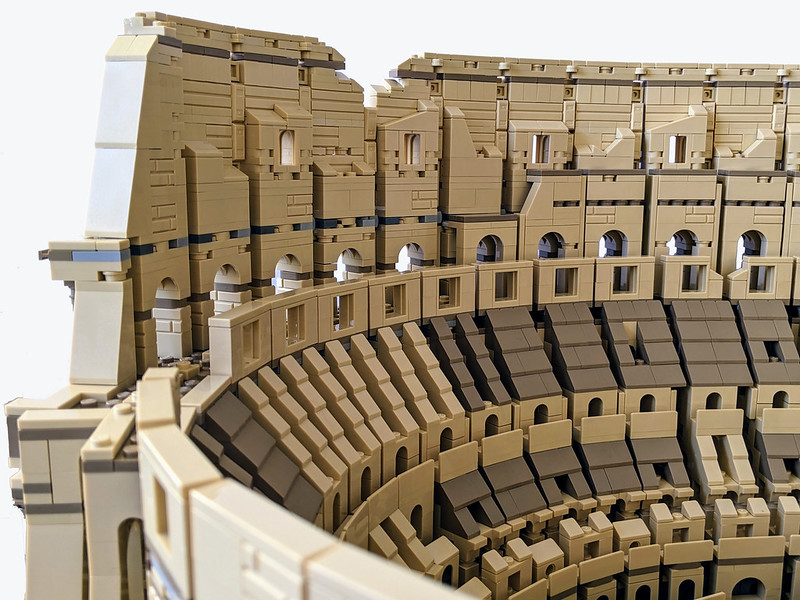 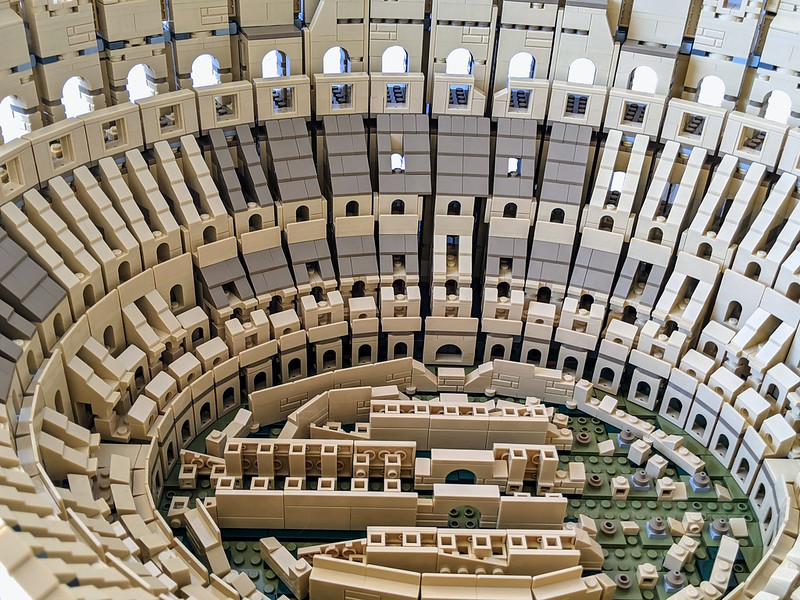 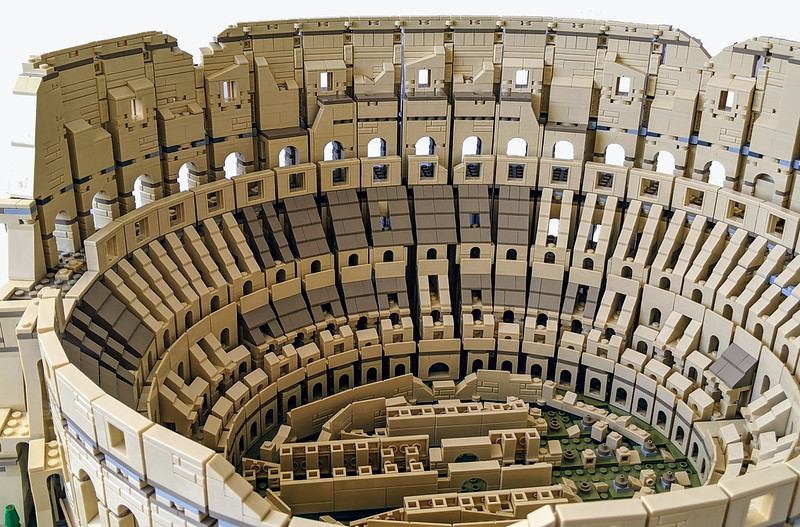 One all elements of the build are complete and connected together, you are left with a study but extremely heavy set, so plan where you’re going to build it so you don’t have to move it around much. All that leaves you to do is add a few small trees and a couple of cars including a familiar coloured pale yellow one and you have one heck of a LEGO set. It will take you hours to complete, I spread it out over a few days not only because it’s such a big set but also because you can get a little build fatigue creating so many similar sections. 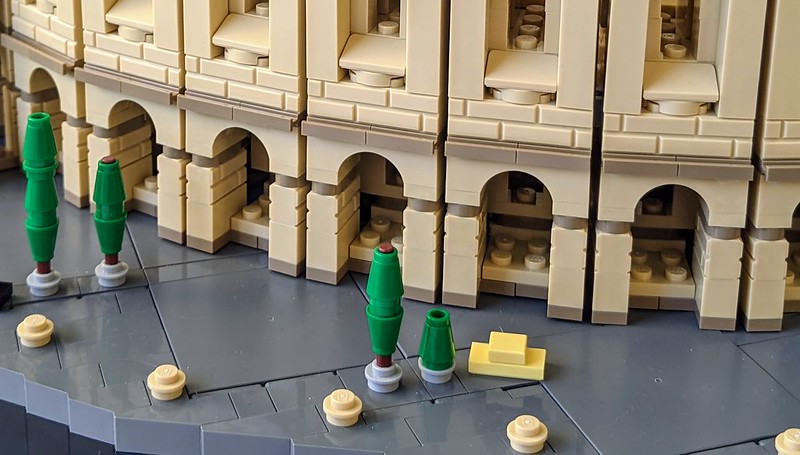 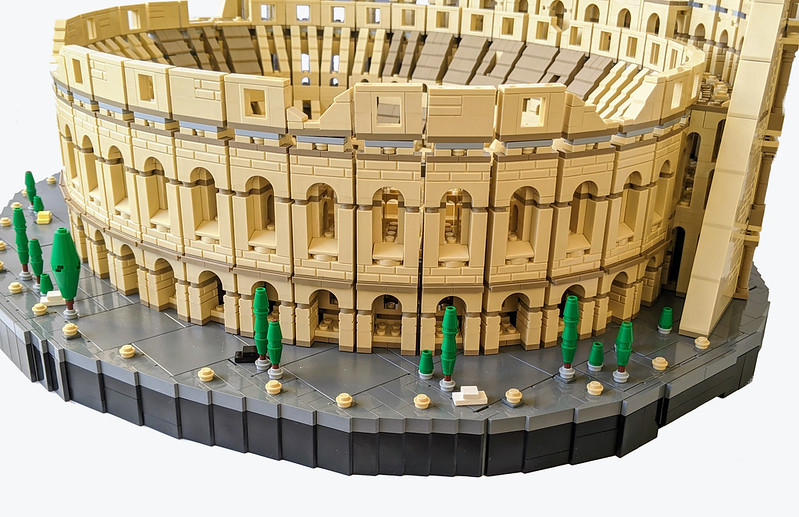 Most of the sets released under the 18+ banner would be considered a Creator Expert set in all but their name. However, this particular set feels like the ultimate Architecture set. For one it’s based in an iconic landmark and it’s also microscale, despite the huge size. As it sits in front of me surrounded by other LEGO builds, you can’t help but marvel at the finished product. It looks more like something see in a museum and thanks to its size, displaying it may require somewhere as spacious as one. Although it’s footprint is a little less than the Falcon, it’s not far off and also tops it on height as well, plus it’s very, very heavy. It’s the largest LEGO set ever created for retail and although there are numerous tiny elements, that large piece count can easily be seen in the finished model. At £450 it’s not cheap, but it has over 1500 pieces than the USC Falcon yet it’s £200 cheaper. It’s the ultimate lockdown build and one impressive holiday gift.

On a side note, I did have a slight issue with one step of the build, due to the incorrect element being included. Considering the set features over 9030 pieces having 4 incorrect elements isn’t that big a deal but it could be a widespread issue. A couple of us who have received the set early had this issue on bag 21. However, this is a rare issue and only slightly affected my experience of building the set and the pieces were sent by customer support.

The LEGO Colosseum will be available during the annual Black Friday promotion, starting Friday, November 27th.