It wouldn’t be Christmas without a new set from the long running LEGO® Creator Winter Village range. These festive-themed sets have given us Bakeries, Toy Shops, Post Offices and even a Holiday Train, which is the inspiration for this year release. This year the train theme continues with The Winter Village Station. It’s a set in its own right but can be enhanced when combined with last year’s festive set. With less than 30 days until Santa brings us and lot more LEGO, it’s time to head home for the holidays as we take a look at set 10259: Winter Village Station. 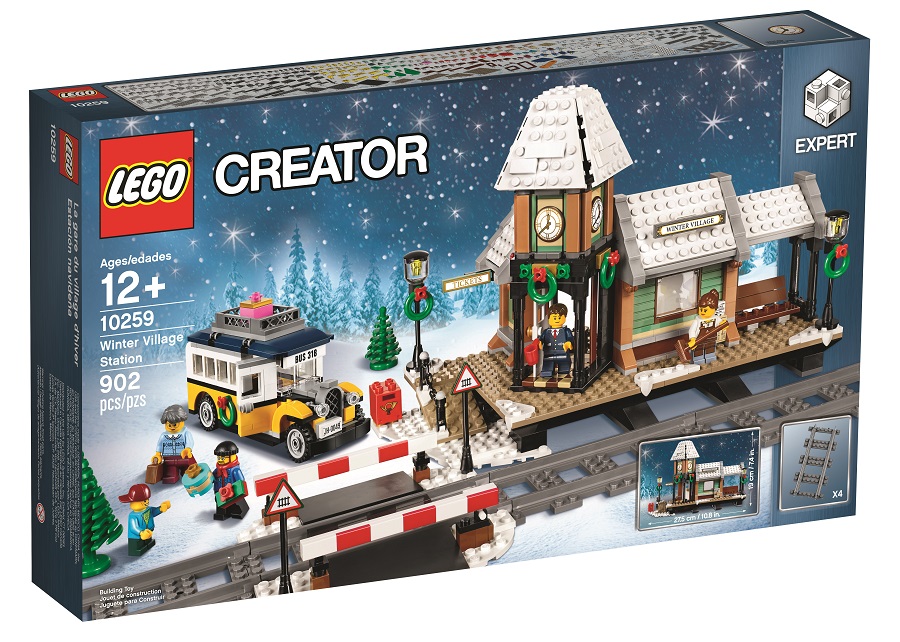 Head for home with the festive Winter Village Station holiday set, featuring a snowy railroad station with wreath adorned lampposts and clock tower, platform, mailbox, green trees, snowy grade crossing with twin barriers and lights, and a beautiful, festively decorated bus with opening doors and a luggage rack with removable luggage and gift wrapped packages. This LEGO® Creator Expert model also includes a ticket counter with a timetable and a transaction counter window with room for sliding out tickets to travelers, plus a coffee shop with a serving hatch and a detailed interior with an espresso machine, cups, cash register and a menu. Includes 5 minifigures. The Winter Village Station has three distinct section including a vintage bus, the train station building and a section of track complete with level crossing. You begin your festive foray with the bus, this vintage style vehicle has an odd colour scheme of yellow, white and royal blue. These aren’t you traditional festive colours although they go together, they seem at odds with the rest of the Winter Village sets, which make it stand out quite nicely. 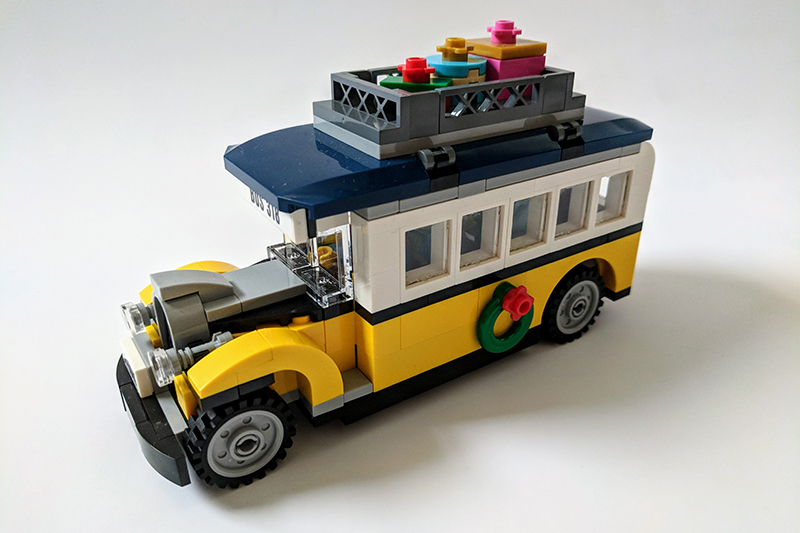 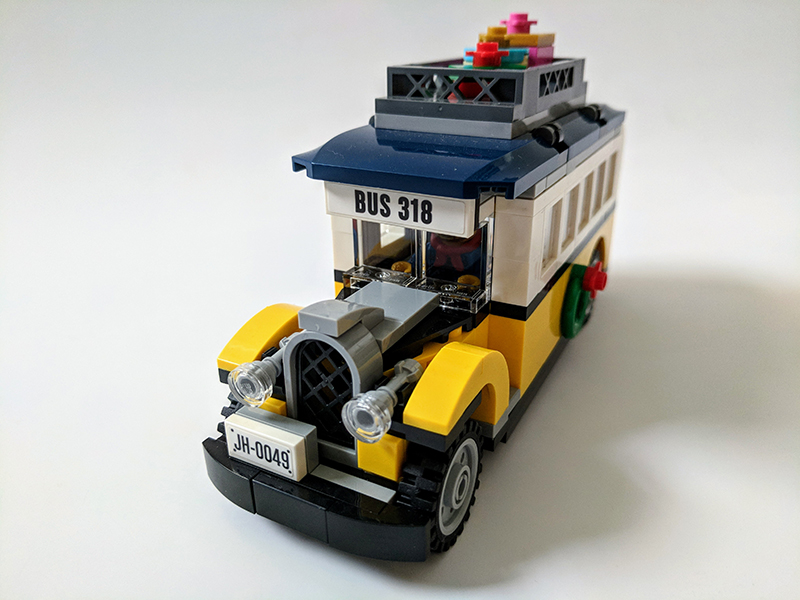 The main body of the bus is fairly standard, with the entire lower section of it featuring yellow elements, this is topped with a strip of white bricks and the bus window, along with the roof section, made of the dark blue pieces. This can also be removed to access the inside of the bus. The roof section has a simple little roof rack built into, this is home to a number of brick built presents. It may be simple but it really adds a lot of character to the bus. 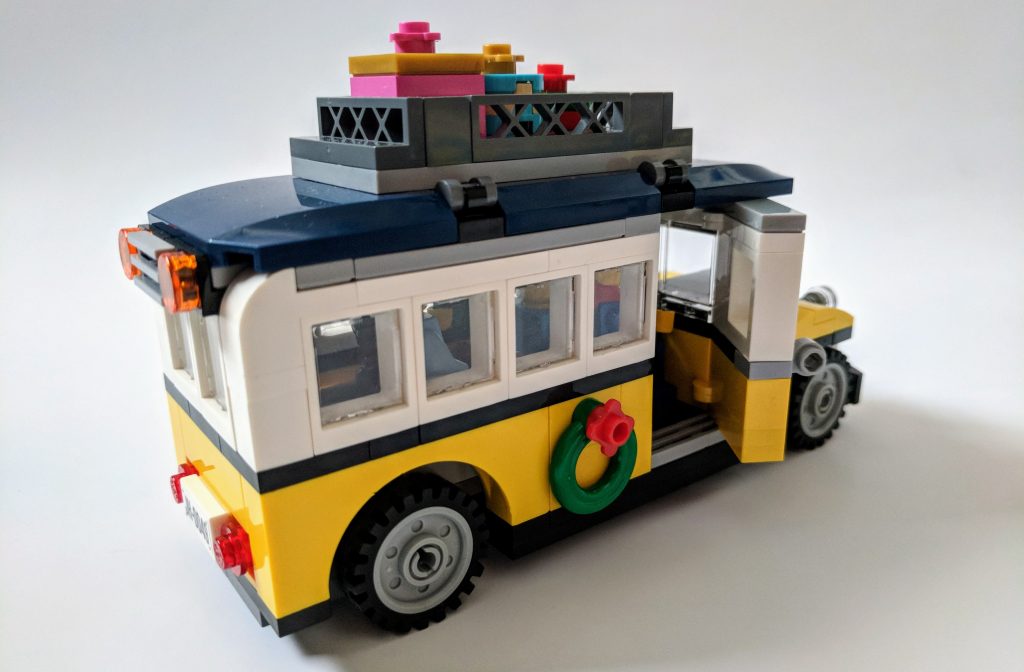 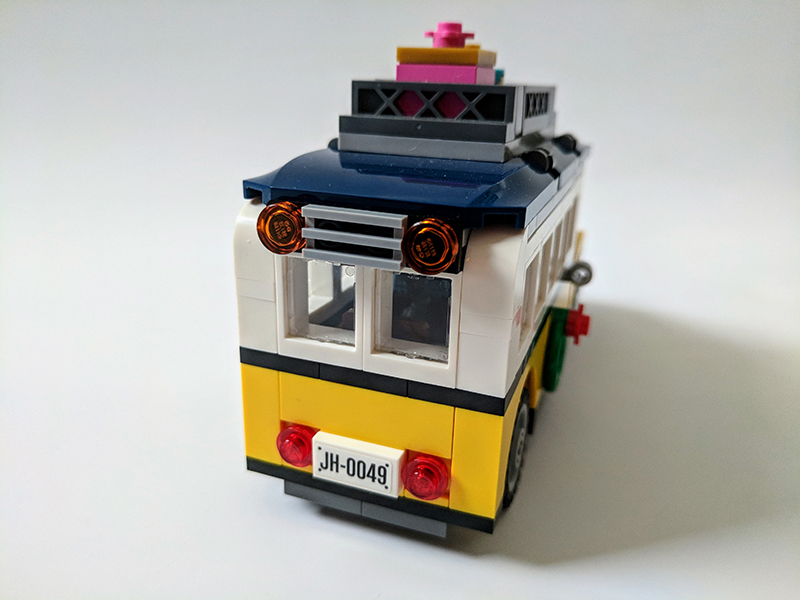 The front of the bus is really cool with a number of different elements used to create that old-style bonnet. This is what helps to give the bus that vintage look, especially the curved window element used as the engine grill and a couple of lightsaber hilts for headlights. Again simple details with add some much to a build. The right-hand side of the bus has a small hinged section which acts as the drivers door. Although it’s much easier to place the driver and any passengers inside by removing the roof. There are four seats inside but depending on who you place inside it can be a little bit of a squeeze. The smallest part of the Winter Village Station build is the level-crossing. This is built around a simple section of track, with two large sloped elements place either side to allow the bus to easily cross. Two barriers are positioned on each side of the track and can be lowered or raised just like a real level-crossing. Unfortunately the part of the build is rather unstable and the side sections can easily come apart with the slightest of movement, but if like most people, you’ll be integrating this new set into your festive displays, moving it around won’t be much of a problem. The level-crossing section can be connected to any other piece of LEGO track including those from the Winter Holiday Train set or any other LEGO City train set. 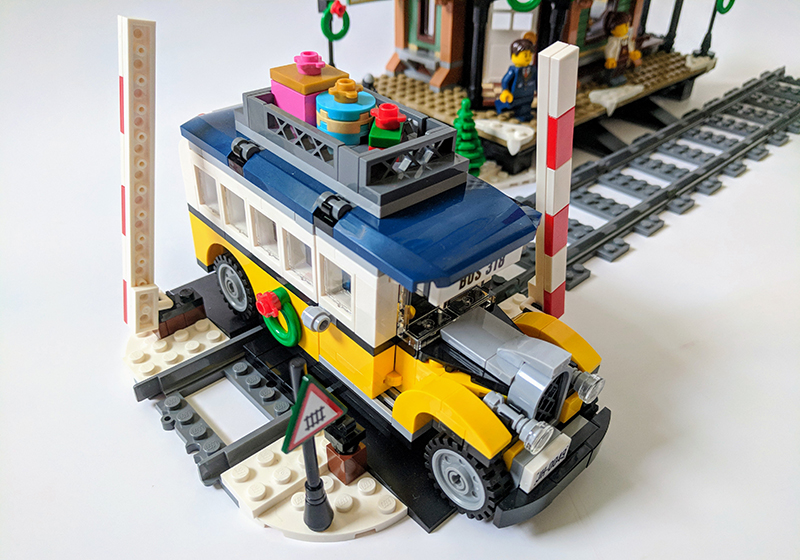 Which brings us the main event – the Winter Village Station building. This comprises of a clock tower, main building with ticket office and café and a section of platform. All of which has been dusted with a fresh level of snow. As the station and platform are meant to be connected to a section of track it’s ever so slightly raised, so it sits nicely should you add the train into the mix. It looks quite dinky in size but there is a surprising amount of building going on in that small area. 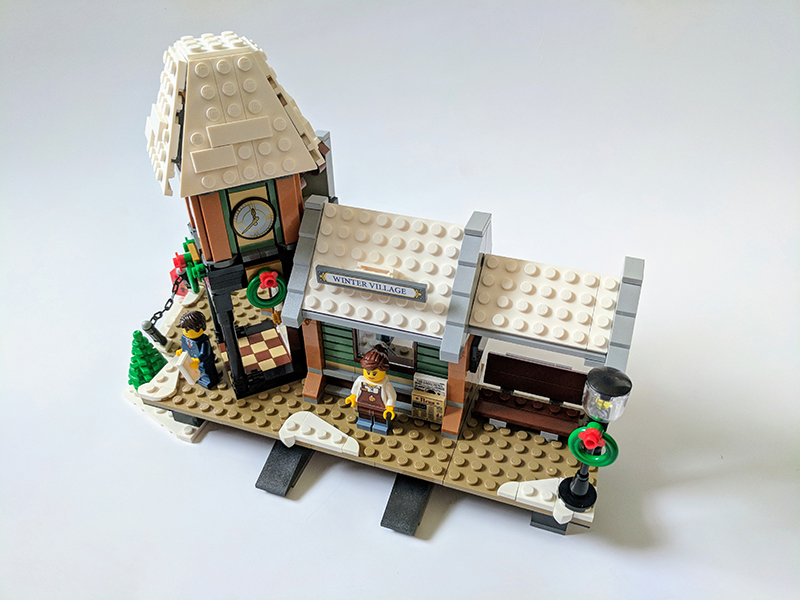 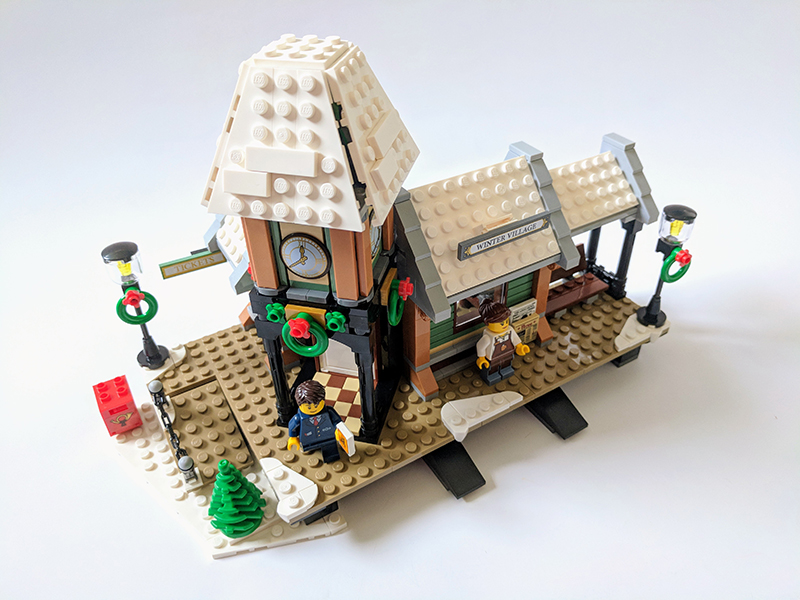 It also doesn’t seem very colourful or very ‘Christmasy’ but I think that works in it’s favour. Instead of cramming it with Christmas lights and decorations, the wintery feel is achieved with the white elements to portray melting snow and the use of the 2017 LEGO colour of choice – sand green. It’s not overly used but those little dashes of it in the clock tower and for the outer walls of the main building are really nice. That’s not the say it completely void of Christmas things, there are a few wreaths dotted around the doorway to the station and on the lamp posts, plus a sneaky mini Christmas tree inside the roof of the station. At first glance the platform area does look a little sparse, but take a closer look and you’ll notice tiny little bits of details which give it loads of character, from the tiny little ‘carved wood’ knots on the medium nougat pillars, the little chain handrail and new printed clock faces which uses the newish rounded shield element. There is a little annoying detail on the main platform section – those two newspapers. It’s definitely not uncommon to see newspapers at train trains but these tow are just stuck to the wall. It just needed a simple 2×1 L element to give the impression of a rack of some sort. The most impressive section of the build it the clock tower, this is angled in such a way you wouldn’t think possible with LEGO. Hidden within the foundations of the platform is a turntable element, this allows the doorway and tower to sit at an completely different angle to the main building. It’s an extremely clever bit of building and makes the set really look unique as it’s not something that often appears in LEGO sets. In fact for such a small section of the overall build that tower has a lot going on. Not only are elements used in a clever way there’s a lot of them in the tower, many of which are hidden within the towers sloped, snow covered roof. Again this use of elements to achieve unusual shapes are what can make a set really stand out from others, as well as to inspire future LEGO sets. Even though there are a fair few elements used in the tower roof, they are all cleverly hidden and do not impact the aesthetics of the build. Inside is a little bit of different story with the brown coloured elements used to connect the roof panels clearly on show. It would of been nice for the white plates to have been backed entirely with brown elements to at least give the impression of a roof. Even if it was a load of 1×1 brown studs. Elsewhere, the inner part of the station is quite quaint, with a small section dedicated to ticket sales, complete with a teller-style window, which tickets can actually fit under and another area is set aside for the sale of hot drinks. Again the café area may not be a major part of the overall build but that little coffee machine is brilliant. A simple 1×1 shaft plate element makes the perfect coffee machine grinds hopper. There’s a few graphic elements, most of which use stickers unfortunately, these include the Café menus, departures board and the outer signage for ‘Tickets’, the stations name and post box. I’m always amused and amazed by the use of unusual of in LEGO sets and the Winter Village Station doesn’t disappoint. For the chain link railing which accompanies the ramp walkway up to the main building of the station. This is created by a couple of shaft elements and a chain ingeniously connected together with a couple of minifigure microphone element and it works perfectly. The set includes five minifigures, which include a bus driver, coffee shop barista, grandmother with her grandson and a ticket agent. Unlike their counterparts in the most of the Creator Expert modular sets, these guys are just like those you’d find in LEGO City sets, with more detailed and individual faces.

The Grandma and her grandson are both fairly generic, I do like the Grandma’s festive jumper even though it’s not that colourful and the young boy is very much like most of the kid minifigures included in other festive sets. But to be fair the minifigures are a mere addition to the overall set. It may not seem like as an elaborate set has some of the previous Winter Village sets, but there is some really great built techniques used across the build. Especially the angled clock tower and doorway, which acts as the sets focal point. Although the set has been created to be enhanced with the addition of last years Holiday Train set, it’s still a nice set in its own right. Sure it is definitely complimented with the train but don’t be put off if you don’t already own it or aren’t planning on picking it up. I really like how the street lamps are the exact same design as those included with last years set, over the course of the last few years Winter Village sets, there been so many different designs of the street lights, once you gather them together each year, the mismatched look is slightly annoying. The station will bring plenty of festive magic to your Christmas displays this year and beyond. The LEGO Creator Expert Winter Village Station is available now from LEGO Brand Stores, selected John Lewis stores and shop.LEGO.com.