On Friday LEGO® announced the latest vehicle to join their already impressive line-up of motoring icons that have been transformed into LEGO sets. The red double-decker Routemaster bus is a mainstay around the streets of London, becoming an iconic piece of the capital’s history and identity. Making it the perfect subject to become a LEGO Creator Expert set. Although the set will launch worldwide on August 1st, it’s currently available exclusively on five of the London-based LEGO Brand Retail Stores. After attending the store launch and picking up this new set for ourselves, here’s our review of set 10258: LEGO Creator London Bus. 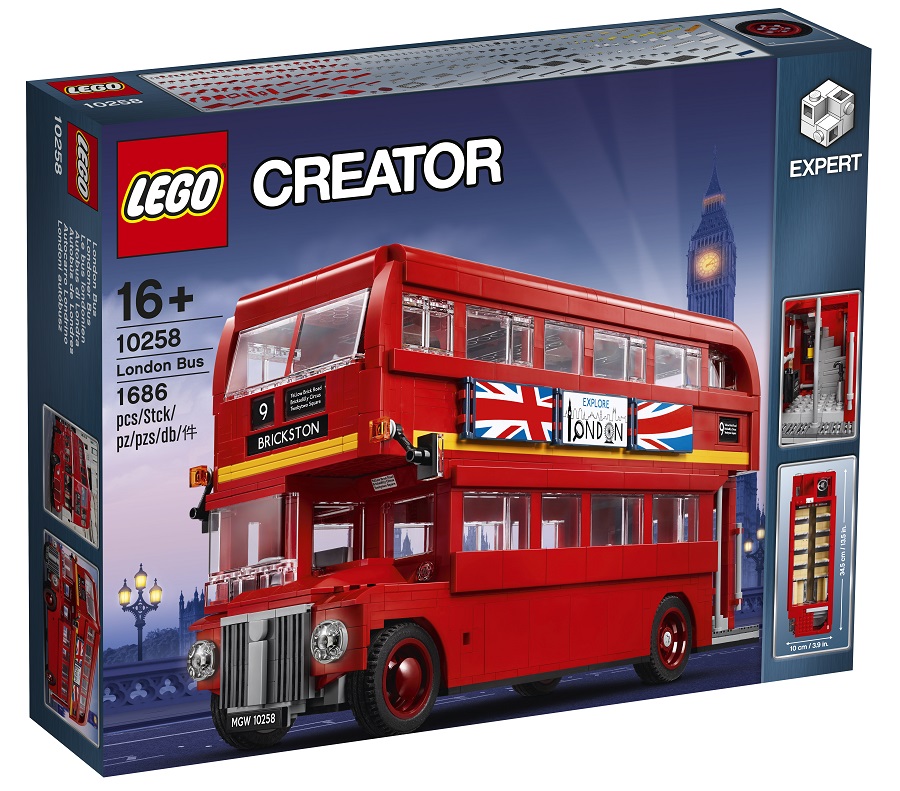 Celebrate iconic design with this charming double-decker London Bus, featuring a wealth of authentic details, including a bright-red color scheme, panoramic windshield, specially made standard-tread tires, destination sign, and an open rear boarding deck with a hand pole, ticket bin, fire extinguisher and a half-spiral staircase that leads to the upper sightseeing deck. Functions include an opening hood with engine, detailed driver’s cab with a sliding door, and a removable roof and upper deck for access to the detailed interior with worn look seating and additional authentic details, including a forgotten umbrella, newspaper, empty beverage can and discarded chewing gum. Reversible transit advertising posters are also provided as printed labels with a 1950s or present-day London promotion. This LEGO® Creator Expert model has been designed to provide a challenging and rewarding building experience with a touch of nostalgia and charm. 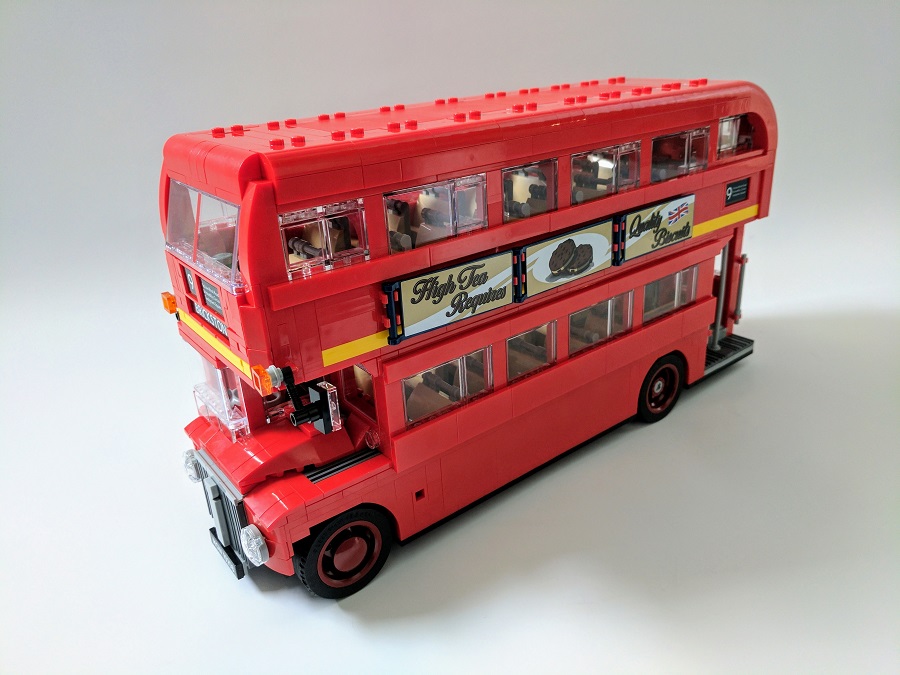 As you would expect from an Creator Expert set, the box contains a fair few bags of elements. These are split across four numbered sections of the build. So no matter if you build old school and empty all the pieces out together or do each numbered stage, it’s nice to have the choice. Personally I prefer the numbered system as I lack the space to be able to spread pieces out too much and with over 1600 elements included in this set, there are plenty to deal with. Stage one and two of the build focuses on the chassis and lower, therefore making up the majority of the overall build. 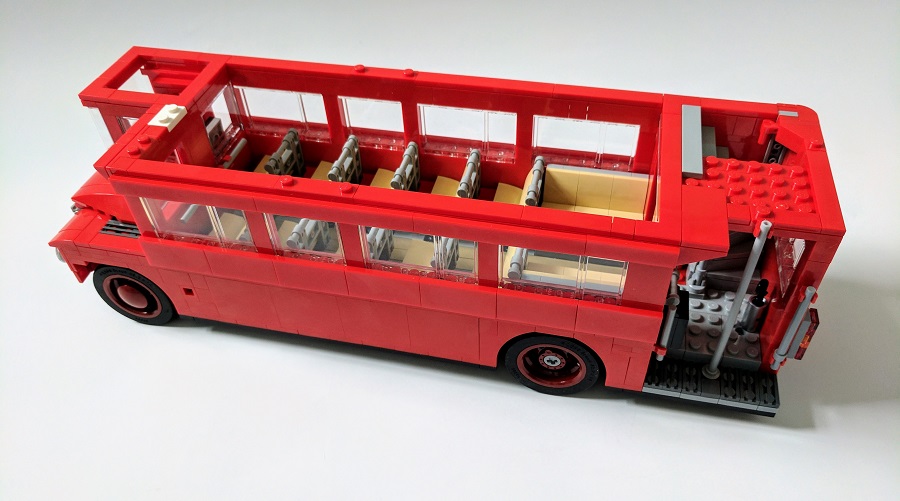 The front of the bus seems to be attracting some criticism from various online voices, but I don’t have any issues with it apart from the wing mirrors which are a little unstable but can only really be achieved with the elements used. The unique front section of older Routemaster-style buses has been nicely captured including access to the engine, just left to the drivers cabin and the grill fronted radiator. One of my favourite parts of the front of the London Bus is the travel information showing the route number, location and stops. Although achieved with stickers, they are slightly in-set against the body of the bus, thanks to the use of window pieces and side-on build techniques, making them look just like the old fashion winding displays buses used to have before they became LED displays. This really helps to add the iconic image of the overall build. 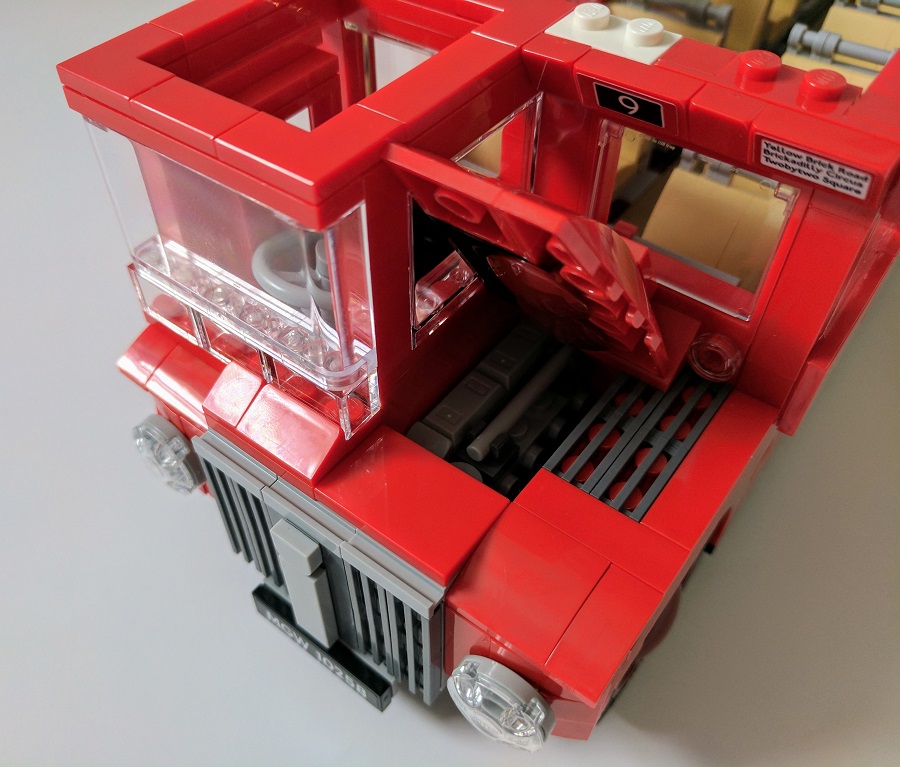 Another nice detail is the sliding window of the drivers cabin, it doesn’t have to be there but it is and that’s why these type of sets are so much fun on a number of levels. Not only are the faithful to the vehicles which have inspired them, they also add non-intrusive ‘play’ features. Something that the designers felt was a big part of the overall narrative of the sets creation. Although they can’t be seen once the seats are in place, I quite like how the tap elements have been used has the legs of each seat even though there are a lot to put in place, on both the top and bottom deck of the bus. 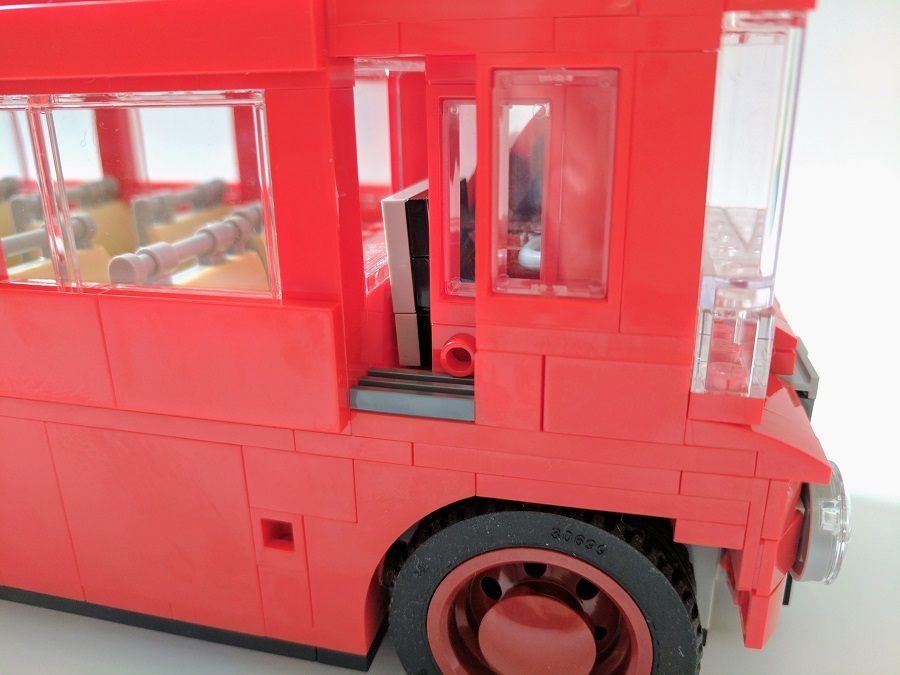 Sticking with the lower deck of the bus, we have that iconic rear entrance platform, which has been lost for most modern day buses. This section is packed with detail and those iconic features of a London Bus. Including a used ticket bin, hand railings and even a discarded umbrella, which has a fun story connected to it, that will be revealed during our designer interview feature. This part of the build is by far my favourite bit. Instead of focusing on one part of the build at a time, it feels more like you’re building in layers, which gradually start to see to come together to provide an amazing level of detail. In fact it’s not until you see the set in it’s completed form do you really get to appreciate everything. Just be really careful of the longer pipe element used to create the main hand pole, as it is a little bendy and can easily be misshaped if forced too hard when connecting. 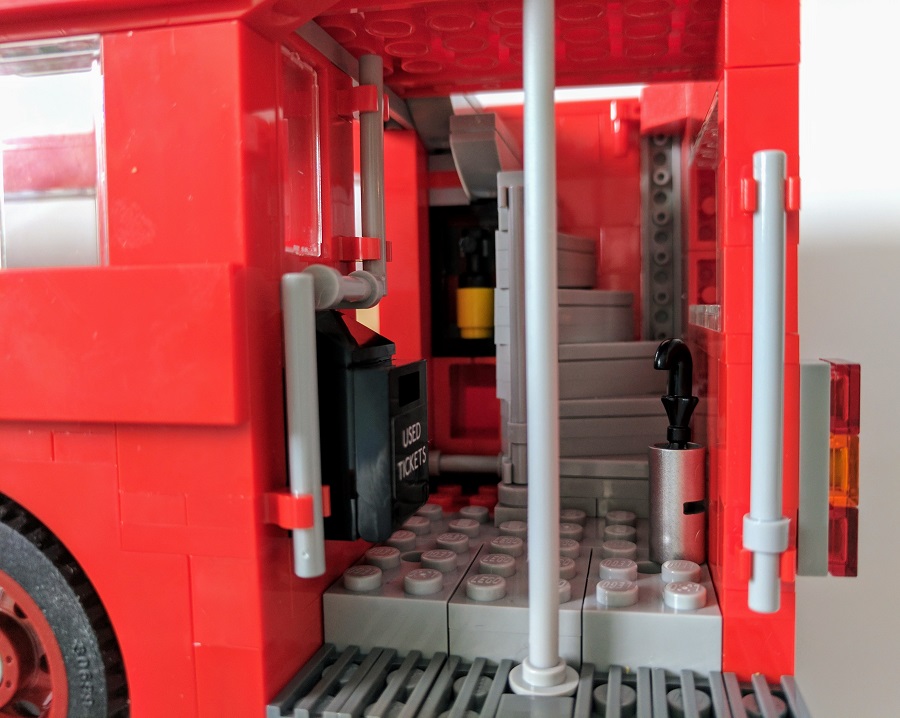 The rear of the bus may not seem that exciting but it has a quite unique curved shape, which has been achieved with the new bow element, a piece that also helped to give the VW Beetle it’s equally unique shape. The element has been recoloured in red and helped to form the entire set. The designer explained this single element helped to set the scale of the whole build. So already this little LEGO piece has proven to be rather useful. The second deck of the bus is built as a separate section to the lower deck, allowing you to gain access to all sections of the bus even when fully built. The top deck is a little less detailed than the lower one, but still manages to squeeze in a few nice features including a discarded can of pop and newspaper, there’s even a piece of gum stuck under one of the seats. The final section of the build is the roof, which is also a separate section, once again allowing access to the inside of the top deck. Each section is connected by just a few studs but still manages to be quite sturdy, yet easy enough to take apart. 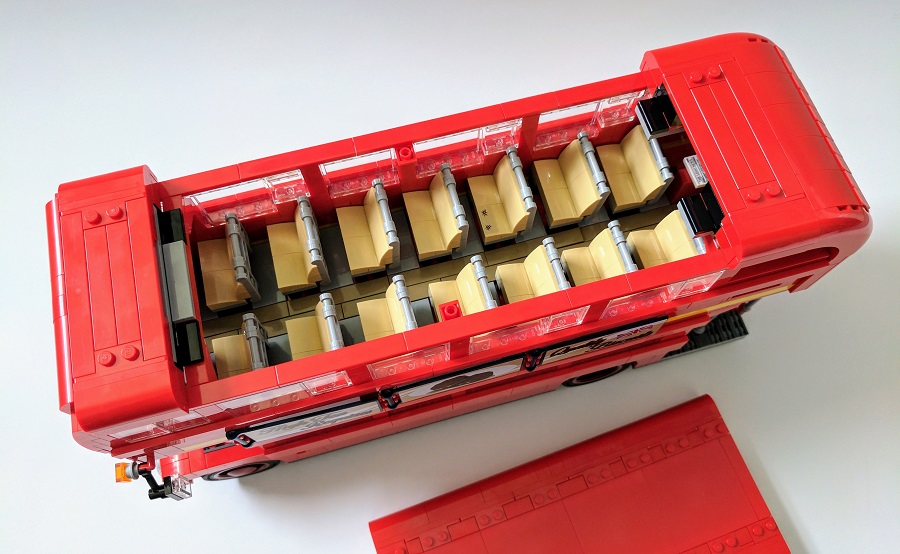 Special elements featured in the set include a new for 2017 tire with a standard tread, the quarter bows and arches in red, and funky 1x1x1 A2/3 bricks with vertical studs. In fact these elements all form the basis of the entire set, with the new vertical stud element entering the LEGO inventory during the sets design and helping to provide additional stability to the rear of the set. That bow element, as mentioned before proved to be an extremely important piece not only giving the set that distinctive curved rear but also helping to scale the entire build. 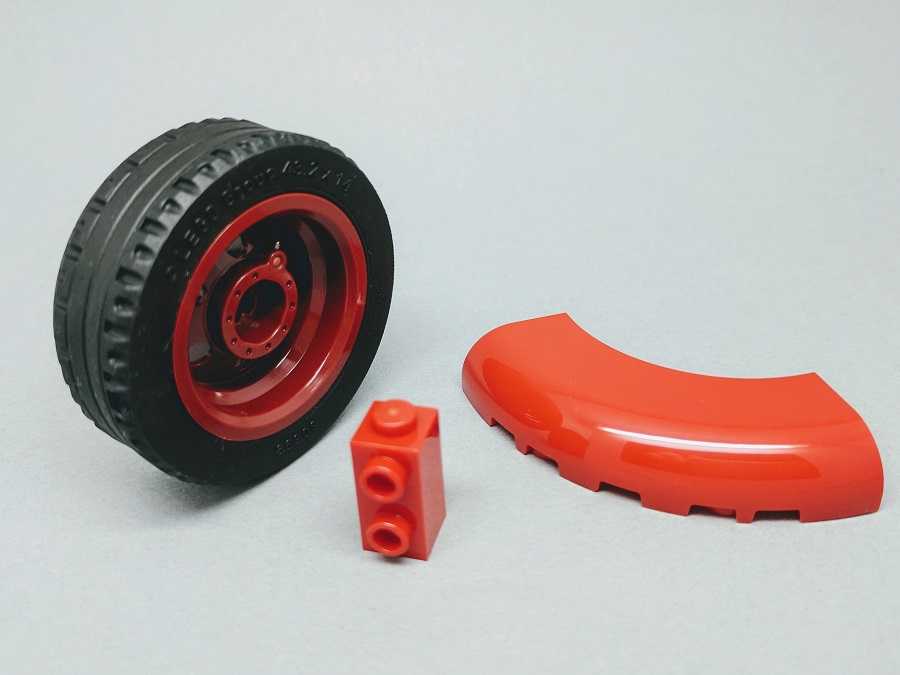 Along the side of the bus, are the familiar adverting panels seen on almost all buses. These are themed to both modern day and 1950’s style ads. With a sweep of the Union Jack and ‘Explore London’ on one side of the trio of banner elements and on the other, graphics confirming the delights of biscuits. The modern day ad stands out better against the red of the bus but the Quality Biscuits ad is more quirky especially the LEGO built biscuits. Only downside is the use of stickers, in fact that’s the only downside of the entire side. 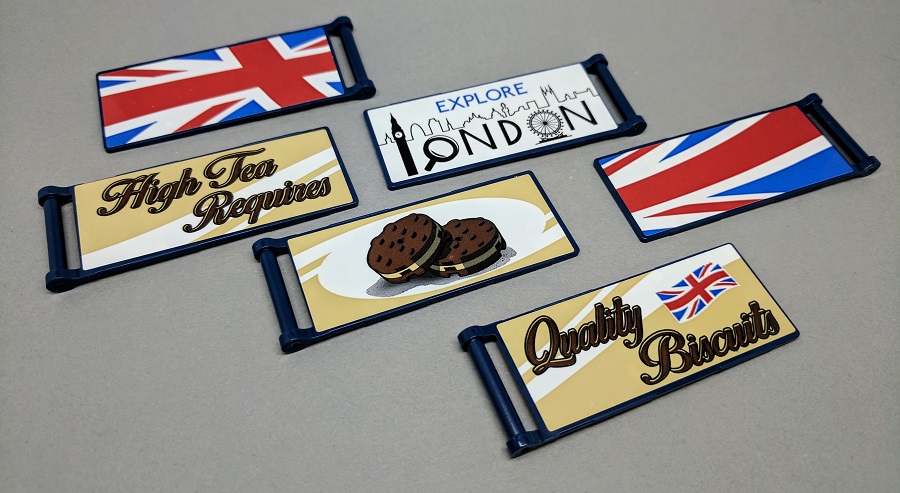 I can understand the lack of printing on the banner elements and some location information dotted around the bus but not on all elements. the ones shown below, give you the choice of the older style black reg plates or more modern white and yellow plates. All of which are created with plate elements including the new 2×3 plate and stickers, it’s a shame as these could of been included as printed pieces.

The London Bus is a truly iconic vehicle and although this isn’t the first time it has appeared in LEGO form, this version is certainly the ultimate one. It will appeal to both LEGO fans and those who have an interest in Routemasters or buses in general. It’s also one of those LEGO sets that will impress even those with no interest in LEGO. The amount of times people have seen other similar Creator sets such has the VW Camper Van, Mini or VW Beetle and have marvelled that it is made from LEGO. That multi level of enjoyment is why LEGO is so delightful. 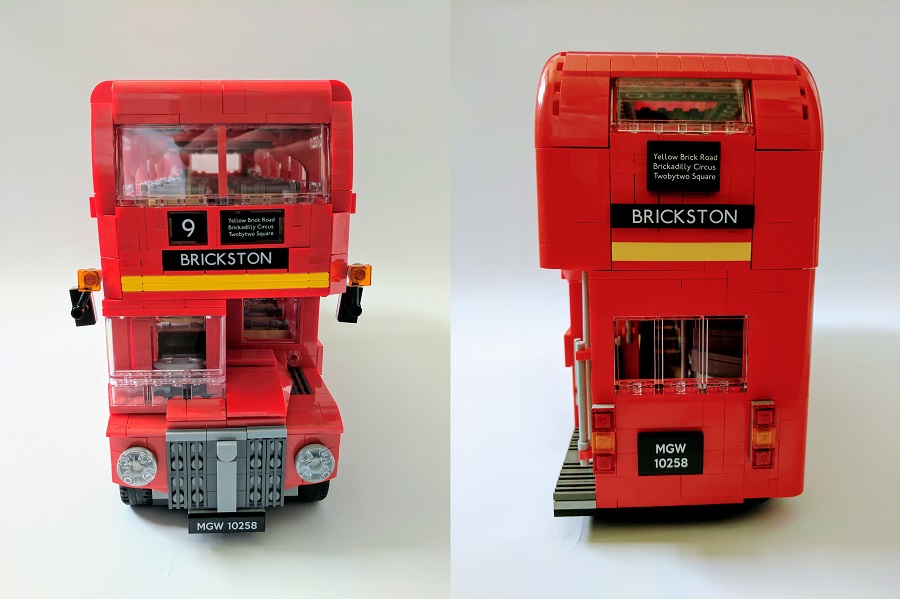 Having built and owned a fair few LEGO sets over the years, the more I sit looking at this set the more I admire the design and story which has been poured into it. In fact I’d even go as far as to say it’s one of my favourite sets in recent years. A true icon of London has now become a iconic LEGO set. Although it’s not an overly complicated build and there are a few repetitive steps, mainly in the seats, it’s great fun to build. Partly down to how the sections all fall into place and provide the details you’d associate with the real world bus. Despite the use of stickers, all of these graphic elements of the set offer plenty of characters, from the British love of biscuits to the play on place names such as Brickston and Brickadilly Circus. The London Bus is a must have for LEGO fans of all ages and will certainly be one of the sets that remain on display long after it has been built. 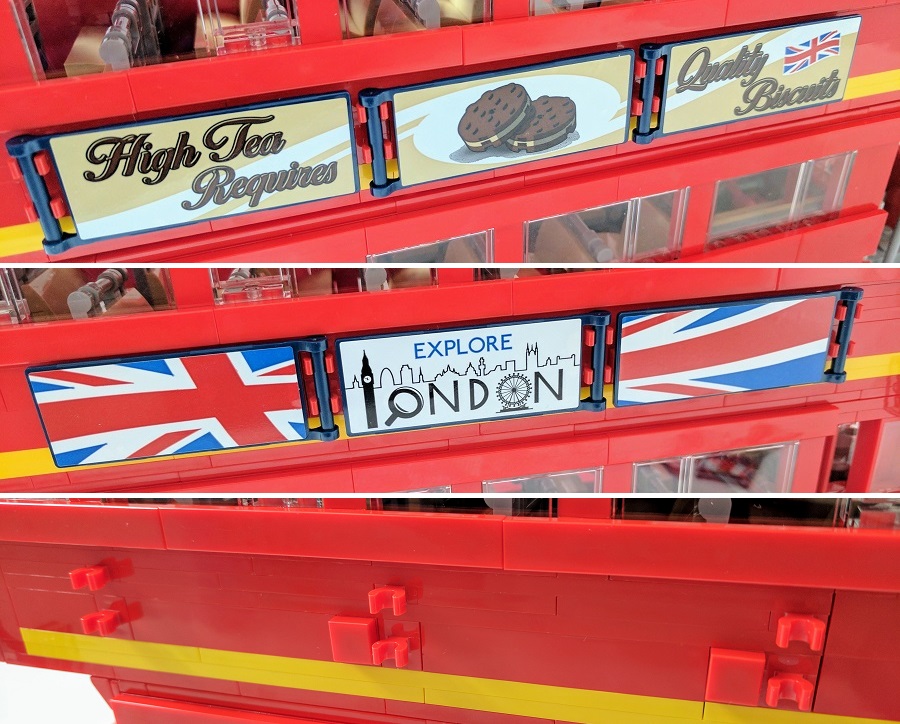 The LEGO Creator Expert London Bus is available now from five London-based LEGO Brand Stores including Leicester Square, Watford, Stratford, Bluewater and Westfield. You can add the LEGO Creator London Bus to you LEGO wishlist ahead of its general availability on August 1st and if your a LEGO VIP member you’ll be able to purchase the set both in-store and online from July 17th.