One of the most intersting additions to the LEGO® universe in The LEGO Movie 2 is the character Rex Dangervest. When the character’s name was first revealed, he was described as galaxy-saving, raptor wrangler, cowboy archeologist. Who just happens to also be voiced by Chris Pratt, with more than a cheeky nod to some of the other roles Chris has played in recent years. As well as being a super cool vest wearing dude, Rex has a fistbump-shaped ship, manned by blue raptors. This is the smallest set to feature both Rex and one of his space-faring dino chums. So I expect to be on a lot of people’s most wanted list, especially for that rather unique dinosaur figure. It’s also one of a handful of sets in the LEGO Movie 2 range to feature a 3-in-1 build. So let’s take a closer look at set 70826: Rex’s Rex-treme Offroader! Display your master-building versatility when you rebuild the 3-in-1 THE LEGO® MOVIE 2™ 70826 Rex’s Rex-treme Offroader and Recon Rex-o-saurus into the Rex-o-saurus Quad or Execu-Rex-o-saurus. The offroader seats 2 minifigures and has a rotating rear turret with 2 stud shooters, while the Recon Rex-o-saurus features snapping jaws, posable legs, 2 stud shooters and a buildable removable gun (non-shooting) that can also be used as a minifigure weapon. This awesome playset includes 2 minifigures and a buildable Plantimal figure to recreate action-packed scenes from THE LEGO MOVIE 2.

The build actually begins with that dino-mounted gun and the Plantimal buildable character, but I shall focus on them later. Much of the build is focused on Rex’s uniquely coloured 4×4 buggy. It’s an intersting build, largely using dark blue elements, with a dash of lime green. There are three seats, two up from and on in the rear, for when someone is needed to mount those two stud-shooting guns. These are mounted on a simple gear system, on which you can twist a dial to move the guns from side to side. There are few sticker decals on various parts of the set, including the a strip on the bonnet, a couple computer screens and on each of the gun mounts. Plus Rex’s R logo on the side. 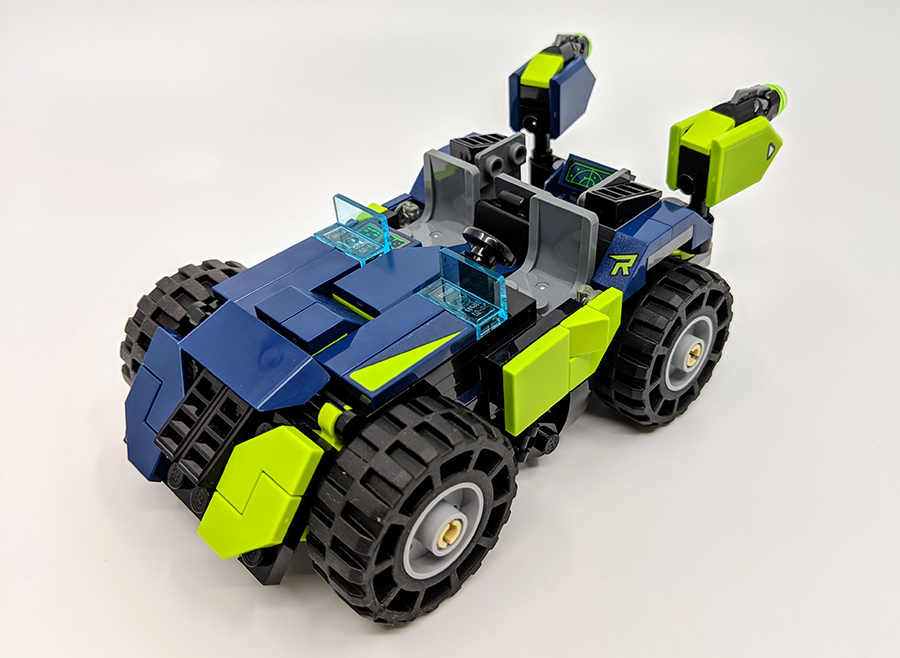 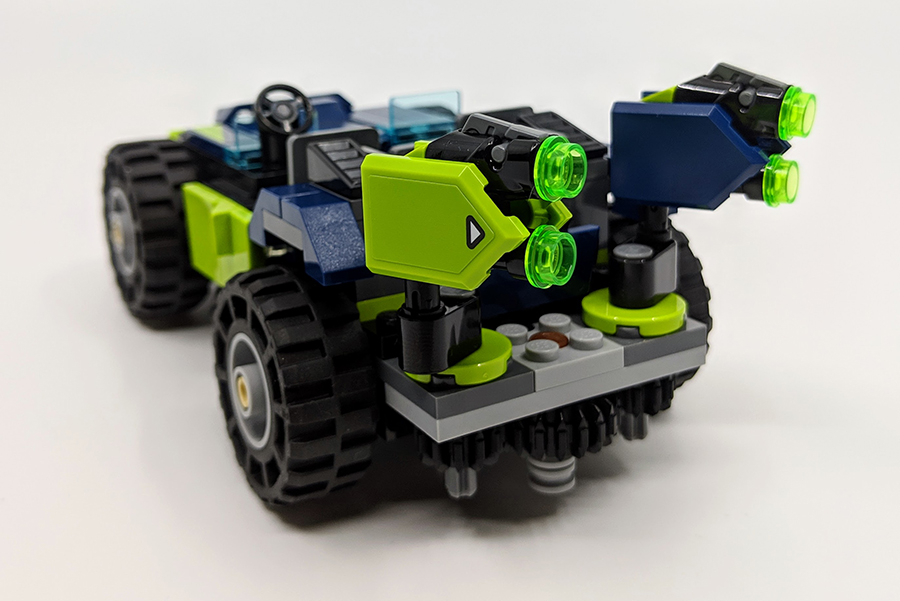 As you can see above, the buggy is built in such a way, it slopes forward, giving it a cool dragster-type look. This is emphasized by a hinged panel on the front and a small fin. It’s a fun looking vehicle with a striking colour scheme. Although not overly complex to build, the base of the buggy is fun to put together and I like the studless finish with the two different coloured elements. It has a Galaxy Squad/ Alien Conquest feel to it, which is always a bonus. I do miss the original LEGO IP story themes. 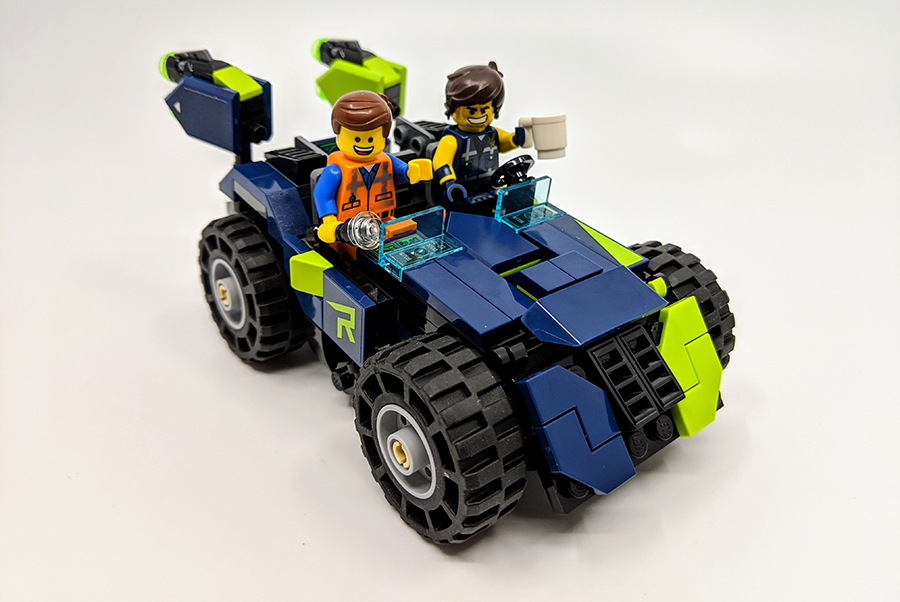 There set offers two addition builds alongside the 4×4 buggy, those two alternate builds are each based around the dinosaur element. These are the Rex-o-saurus Quad or Execu-Rex-o-saurus, now I don’t often like rebuilding sets. I know that’s the whole idea of LEGO but once I’ve chosen which build to build, most often the main build, that’s me done. But you can’t review a set if you don’t build everything that’s on offer. To create any of these alternate builds you’ll need elements from 4×4 buggy and of course, you’ll then be left with a number of unused parts. The most extreme of the two builds is the Quad, which physically connects to the body of the dinosaur. As the current LEGO ad campaign states, “it’s not a brick, it’s their wildest wishes”, should you have every wanted to build a dinosaur-based vehicle, then this is the set for you. It’s nuts and I love it. The set includes four characters, including a brick-built alien being known as a Plantimal. The odd looking creature usee some pretty strange parts including quite a few re-coloured elements, such as a pink jungle leaf, orange plant leaf and a purple crab. Plus a couple of cool glitter-infused pieces. It’s an odd little thing, and proof you really can build whatever you can imagine with LEGO. There are two standard minifigures Emmet, who looks just like Emmet, apart from his two different faces, he’s exactly the same minifigure as he was in past sets and other The LEGO Movie 2 sets. Something which is part of the joke regarding his character, the world can collapse around you but always stay upbeat. However his polar opposite is the charismatic space jock, Rex Dangervest. He has a brand new hair element and a couple of chiseled faces. The closer you look at Rex you can see how similar he is to Emmet. Both have vests, both have ‘original’ eyes, and both hair pieces have a notch on the back. If it isn’t revealed that they are related, I’d be very surprised, especially as they are both voiced by Chris Pratt. 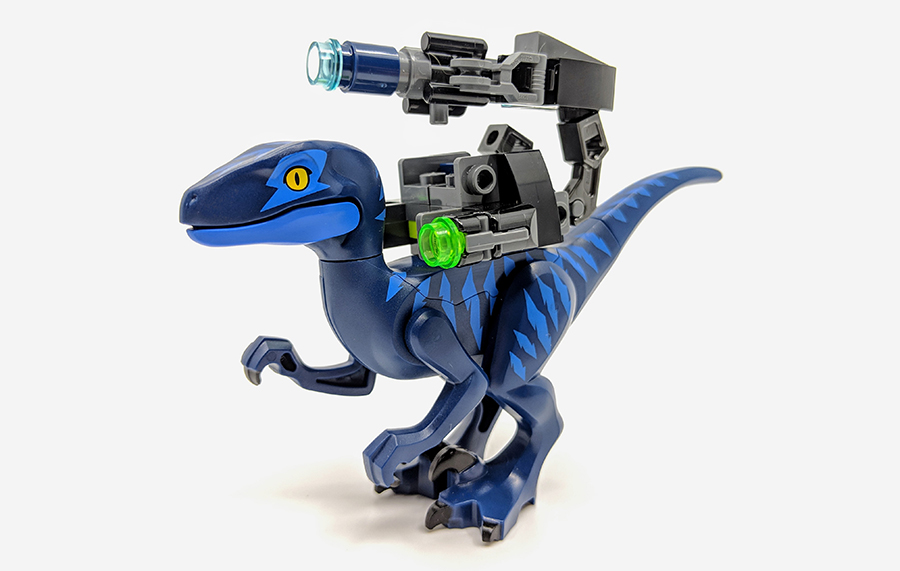 But the most unique part of the entire set is this oddly coloured dinosaur. As seen in the various trailers for the new movie, Rex has a workforce of blue space raptors. Obviously inspired by Chris Pratt’s Jurassic World characters, Rex has raised them from younglings and they are literally blue, there is no subtlety here. The space raptor includes a buildable turret mount, which connects to the 4 studs on the back of the dinosaur. Surprisingly this doesn’t feature a stud shooter. The actual mount for the Rex-o-saurus is exactly the same as the raptor from the Jurassic World sets, obviously differently coloured and the eye is a little bigger on the new version. Together they are a pretty cool set of characters, especially Rex and his blue dino chum. I love Rex’s rugged, cheesy grin face and a blue dinosaur, sounds odd but it actually looks really good, strangely but good. Emmet is just Emmet, however it fun to see him next to Rex. If nothing else they are ripe for being used to create fun photos. Or should that be family portraits? 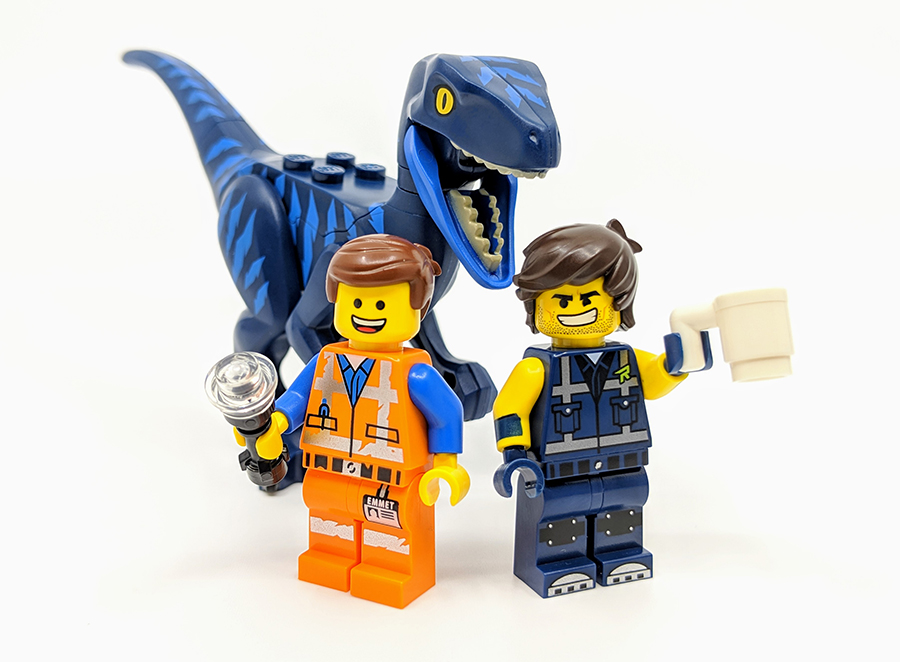 Although not a complex build, the buggy part of the build uses some cool elements, which results in an interesting looking set. I like how elements have been used to give the vehicle some unique looking angles. I also like how all the parts you need to build the main model and the alternate builds have all been incorporated into the main build, even though some of those parts aren’t necessarily needed on the main build. Talking of alternate builds, the Rex-o-saurus Quad is the craziest thing I’ve seen in an official set. I like how the movie and the sets have embraced what every kid has probably tried with LEGO before, using random bits to build weird creations. Even so I doubt anyone has come close to creating something this nuts. The minifigures are fun especially Rex and that strange looking Plantimal continues with the sets strangeness. That’s a good strange not a bad one.