He’s been know by many monikers over the past 80 years, from the caped crusader to the dark knight. As Batman celebrates a landmark anniversary this year, a selection of new LEGO® sets have been created to celebrate DC Comics most enduring hero. One of the most intersting of these new sets is yet another take on Bruce Wayne’s bat-themed mode of transport – The Batmobile. This latest set doesn’t appear to be based on a particular version, however is does have a remarkable similarity to Batmobile from the classic Batman The Animated Series TV show. But it is worth added another Batmobile to your collection? Let’s find out in my review of LEGO Batman set 76119: Batmobile: Pursuit of The Joker. 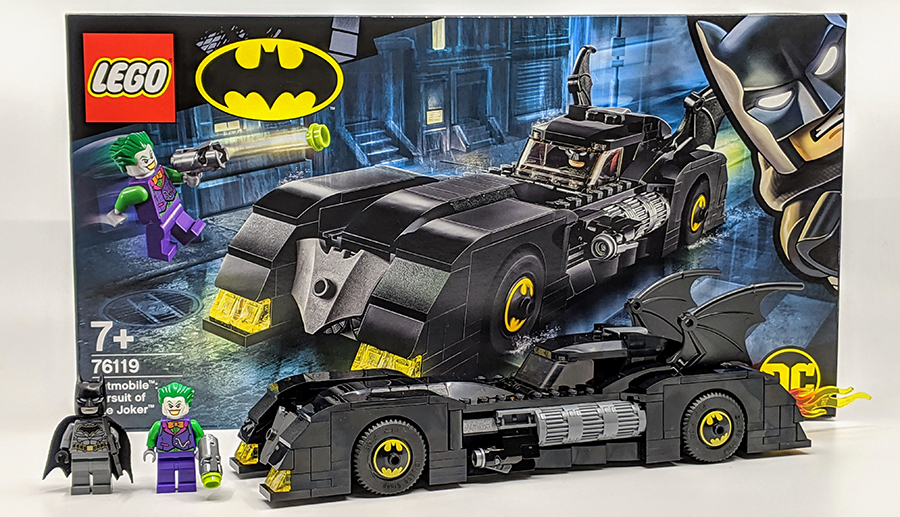 This classic Batmobile toy car model has lots of eye-catching features to delight young super heroes, including a detailed dashboard in the opening minifigure cockpit, Bat symbol decoration on the wheel trims and a flame exhaust element that automatically rotates when the car is pushed along. The Batmobile’s hidden, foldout stud shooters are also great for battles against The Joker, who is also equipped with a stud shooter. This LEGO Batman toy playset includes 2 minifigures and children can customize their builds, minifigures and weapons with the included pack of 10 assorted Bat elements.

Before The Dark Knight came along and made the world of Batman all dark and brooding, things were a little more fun and unconcerned with being ground in reality. So many of the Batmobiles before this had a similar appearance. The most iconic of which is the 1989 version from Tim Burton’s classic take on the world of Gotham. Something which also influenced Batman: The Animated Series from the mid-90s. This Batmobile is a pleasing mix of both of those medium’s Batmobiles. It’s also an almost identical scaled down version of the Ultimate Collectors Edition Batmobile from 2006. I really like the long fronted section of the Batmobile, it almost looks as if it is armoured, thanks to the various flat plated elements. Something which is replicated along much of the body of the vehicle. In fact it almost makes the exposed studded strips either side of the gun barrels seem out of place. 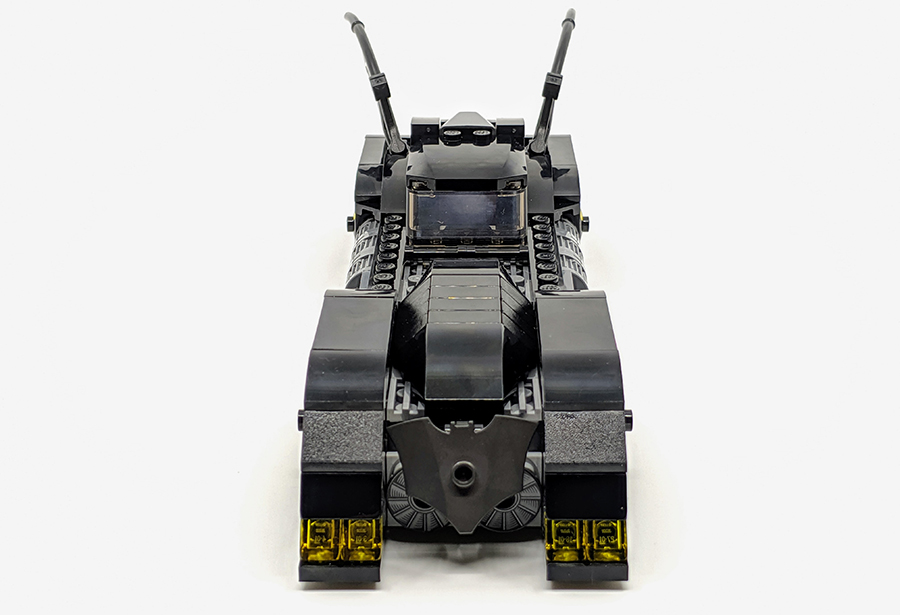 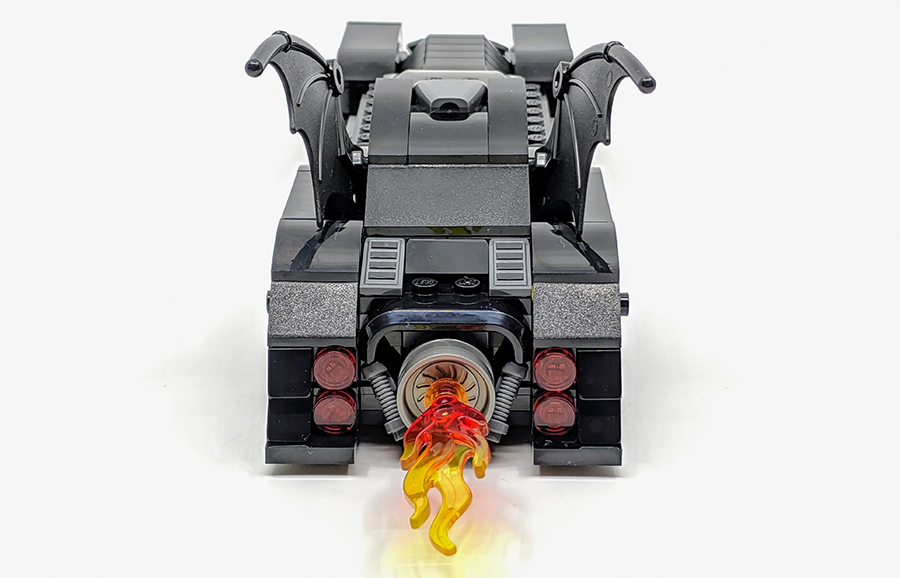 The cockpit of the Batmobile is nicely done, with the top section hinged at the front so it flips open. Inside is an area to seat Batman and a 1×4 printed tile to replicate the Batmobiles dashboard. This is flanked by two Bat-wing fins, I would have like to have had them positioned a little lower down, to keep with the sleek lines of the rest of the vehicle. 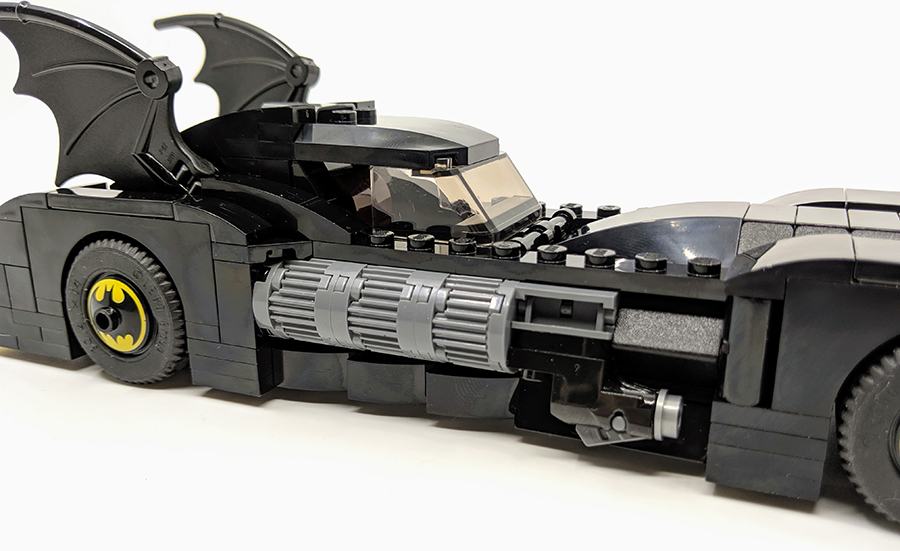 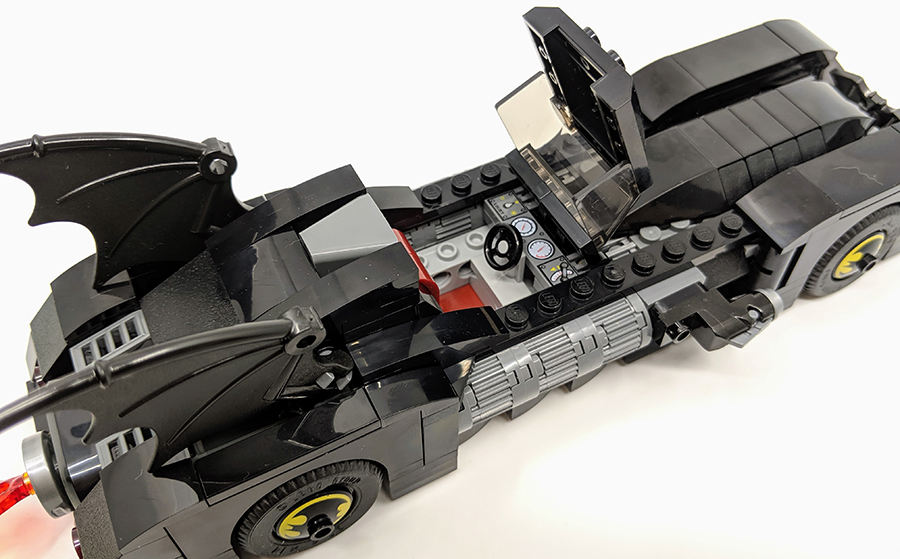 I really like the long front bonnet of the Batmobile, this is what makes it look so similar to Animated series Batmobile. At the very front of the vehicle is one of the new Bat-signal elements, this can be flipped up to reveal to printed 2×2 round tiles. That Bat-signal isn’t the only one featured in the set. You get an entire bag of difference shaped and sized Bat-signal elements. So that’s a nice little bonus. 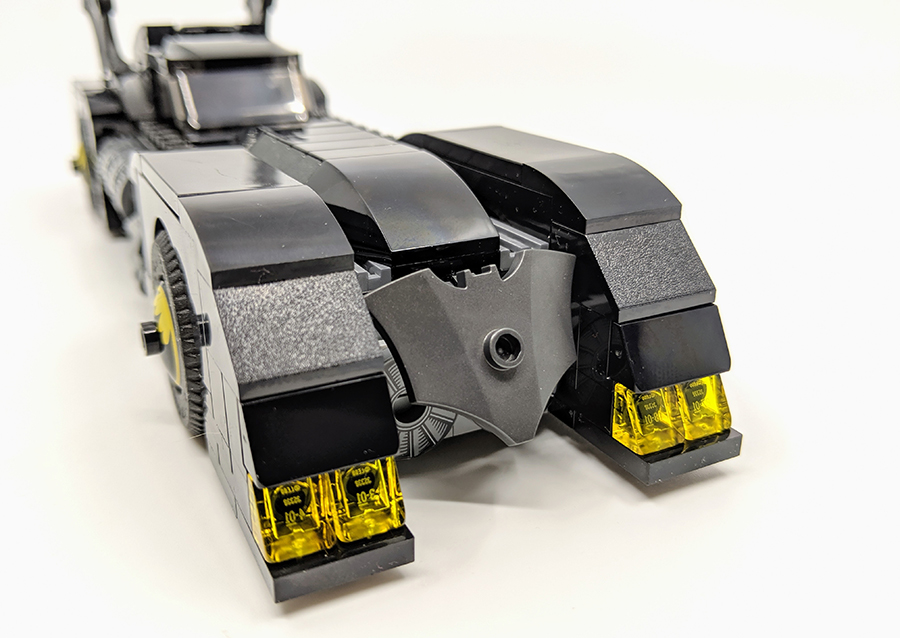 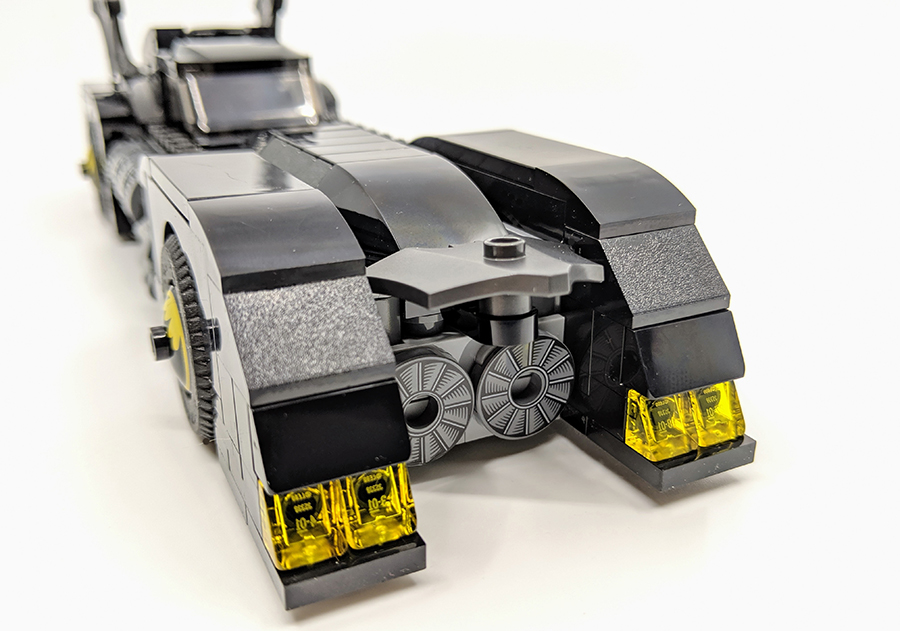 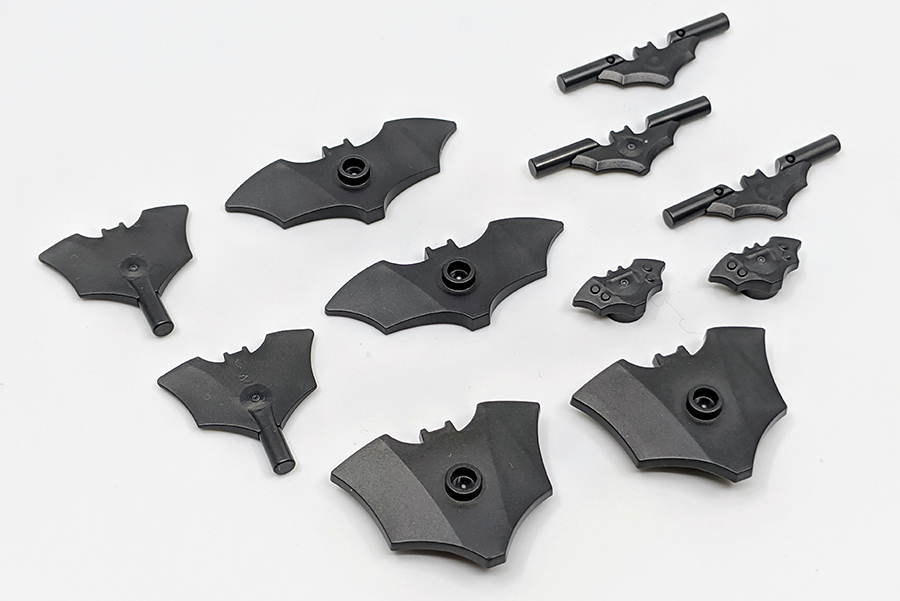 At the rear of the Batmobile is a flame element, which spins as the vehicle is pushed along. This is achieved by a simple gear system to the rear of the build. This is a fun play feature and a indirect nod to both the classic 60s Batman TV show Batmobile and the 1989 Batman movie by Tim Burton. Both Minifigures are new for this year, although both characters have appeared in Minifigure form numerous times before now. Joker is extremely similar to his other versions with the same slicked back green hair piece used, however there are a few minor differences compared to other Jokers. He is jacketless, which offers a nice new take on his outfit and results in a colourful torso. He’s also got grey hands in place of white ones, this is a nice minor callback to the characters earlier LEGO appearances. I do like The Joker’s two expressions, one is his trademark yellow-toothed grin and the other is a slightly miffed look. Batman has an impressive array of Batsuits, many of which have translated into an equally impressive selection of Minifigures. This one isn’t particularly special and is similar to the more recent takes on his suit. One thing that is unusual with this Batsuit is the lack of different colour used joint section for the top of the legs. On Batman this is often a different colour to give the ‘pants-on-the-outside’ look often associated with the character. The newer open-mouthed batcowl is used, which I quite like, however it gives you a better view of Bruce’s unfortunately pale face. A fair few recent Minifigure have suffered from poor print quality, especially when a lighter colour is layered on a darker surface. I know Batman mainly goes out at night, but his skin wouldn’t be his light. There have been many different LEGO versions of the Batmobile and this is one of the better ones. Sometimes you don’t need to go overboard with the design and the sleek, simple take is just a visually pleasing. It’s a nice cross between the Tim Burton Batmobile and the Animated Series version, which are often held as the most iconic versions of the vehicle. I like the moving flame and almost barrel like guns along the side. Those printed bat-signal hubs are quite nice, in fact the lack of stickers full-stop is a nice touch. Although the Minifigures aren’t amazingly different from many past versions, there are a few little tweaks to their appearance, which mix it up a little. It’s a nice little build and I’m glad it’s not been shoehorned into a larger set, which often happens to the decent versions of the Batmobile. It’s definitely one of the better 80th anniversary sets