After the Ford Anglia and the Hogwarts Express, one of the most iconic vehicles from the Wizarding World of Harry Potter has to be the Knight Bus. Here in the UK, the muggle version of the night bus is a thing of legends, a strange late night world, filled with some crazy characters. The Knight Bus is just as legendary, and certainly more magical. Harry uses it to travel to Surrey in the Prisoner of Azkaban. It’s based on a classic London Double Decker bus, with the addition of another floor, beds and the ability to travel at tremendous speeds from London traffic. This isn’t the first time the Knight Bus has been recreated in LEGO form, the first set was released in 2004 and another take on it was released in 2011. This new version is similar to the 2011, although new elements and build techniques makes the latest version a lot more faithful to the movie. So brew yourself a cup of hot chocolate and settle down for my review of set 75957: The Knight Bus. Give your young witch or wizard the ride of their life aboard the LEGO® Harry Potter™ 75957 Knight Bus™! When kids catch the purple triple-decker bus, they know they’re in for a wild ride. With a hinged side panel for easy access to the interior, and a removable roof to reveal the upper deck, this magical toy bus playset is bursting with play potential. Once Harry’s trunk has been loaded, it’s time to hold tight. As the vehicle races away, swerving around corners and bouncing over bumps, kids will love how the bed slides back and forth and the chandelier swings from the ceiling. Includes 3 minifigures. When I first saw images of this set I thought it looked quite interesting, both visually and to build. The whole set is basically built as three different sections. Which the base of the bus featuring the most detail. I really like the front of the bus, as there is nice range of features achieved by both elements and stickers. Just like real vintage double decker buses, one side is further back compared to the other. The same can be said to the rear of the bus, which features an open platform to allow for passengers to hop on and off with ease. These are what gives the vehicle its unique look. The lower deck of the bus features a little bed, which can be slid along a short rail-type runner. The driver’s seat is mount on a hinge to allow you to place a Minifigure on it, although it’s still a little awkward. The Shrunken Head is hanging in the drivers cab, although the way it’s mounted means it’s slightly leaning to one side. Unless I’ve mounted it incorrectly. 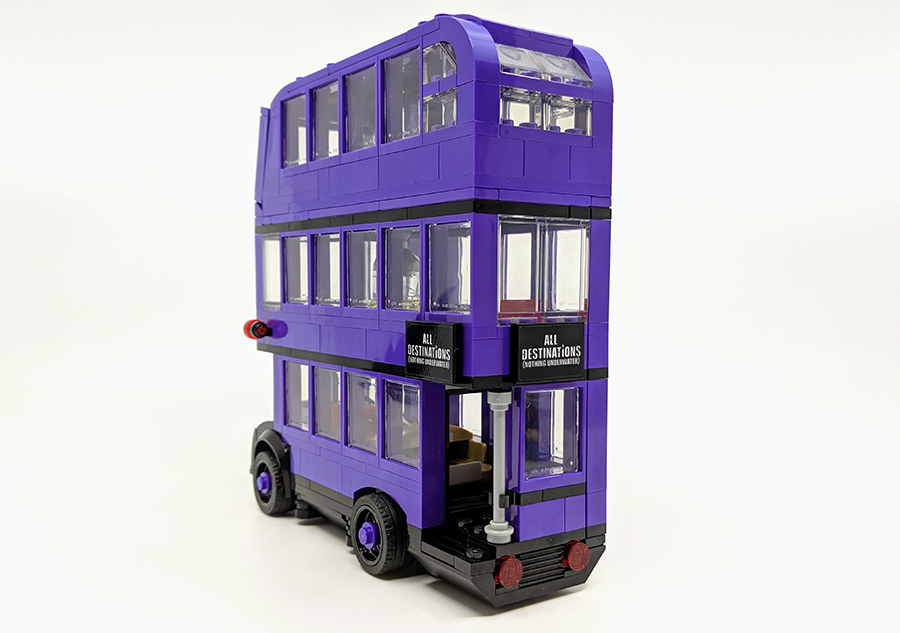 The second deck of the bus is built with the lower deck and can be accessed via a sort of door section on one side of the bus. This allows you to access the drivers cab, bed and a lone seat at the rear of the bus. I quite like the little chandelier which is hanging over the bed, just above a advertising board for the Daily Prophet newspaper. The bed is built separately to the body of the bus and is hinged so you can place a Minifigure in there, although you have to pose the it oddly so it fits correctly. The upper deck is more for show than passengers, here you can place Harry’s chest and you’ll find a pile of newspapers, including a printed Daily Prophet tile. This part of the build is simply covered by a couple of plates. The upper deck can be removed from the rest of the bus. All in all it’s a fun little build and definitely the most faithful LEGO recreation of the source material. The set features three Minifigures, all of which are new for 2019 in terms of the new wave of Harry Potter sets. Stan Shunpike is the slightly dim, conductor of the Knight Bus. His outfit matches the colour of the bus, so he’s kitted out in a bright purple suit and cap. His hat is a recoloured version of the Sea Captain’s cap and suits the characters look. I like Stan’s print detail, especially his ticket dispensing machine, printed on his torso. Ernest Prang his the eccentric driver of the Knight Bus, his past LEGO versions haven’t managed to capture his owl-like appearance. Although this new versions hasn’t quite nailed his hair, the bald head element is a closer match. His face print is spot one and is certainly the best take of the character so far. Finally there’s Harry, although he doesn’t look much, this Minifigure marks an older take on the character. If you look at Harry from the first wave of sets, which were based first few films; Harry has short legs. The Harry in this set uses the new ‘teen’ legs to reflect the characters older age. He’s also the only Minifigure in this set to feature two expressions.

The Knight Bus is a unique looking vehicle, which makes it’s perfect for a LEGO set. Compared to previous versions, this is certainly the best looking and most detailed. In fact it’s a vast improvement over past Knight Bus sets. The shape is much better, the windows are much better and Minifigures are much better. I must say the box doesn’t really do the set any favours, it looks almost unfinished and thus makes the set seem a little blander than it is. I think this may be partly because of the numerous window panels it features and solid block of colour as well. I was surprised by the level of detail is features and how much the build is improved by just a few modern day elements. I think this could be one of the most popular of the new sets, and if Potter isn’t your thing then it’s also a nice little set for parts.