The Prog first appeared in the Star Wars universe as part of The Last Jedi. These sea dwelling creatures inhabit the planet of Ahch-To, along with exiled Jedi Master Luke Skywalker. Their inquisitive nature makes them quite the comical little creature, something which has caused them to be equally loved and loathed by Star Wars fans. They first appeared in LEGO® form in both the UCS Millennium Falcon and Ahch-To Island Training sets but now they are a little more life-sized, thanks to the upcoming release of set 75230. A set which, just like the Porgs themselves, seems to be splitting the opinions of LEGO fans. But haven’t built the large-scale R2-D2 and BB-8, I was intrigued to see what this life-sized Porg has to offer and I was quite surprised, so here’s my review of set 75230: Porg. 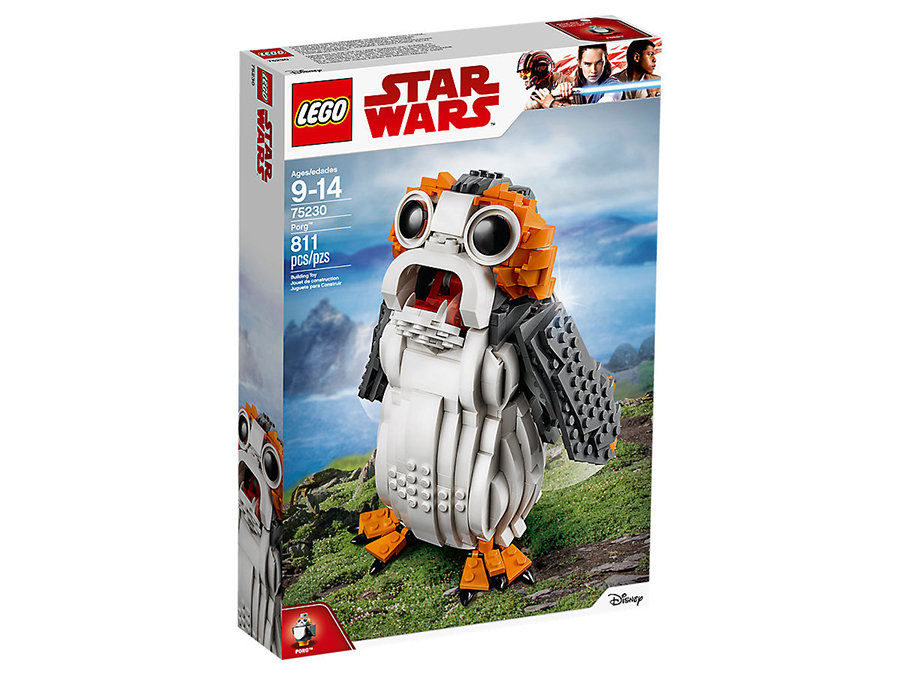 Own an unmistakable character from Star Wars: The Last Jedi with this LEGO® Star Wars 75230 Porg! This faithfully detailed Star Wars toy includes intricate feather detailing, authentic colors and an opening mouth and flapping wings when you press the tail. The set also comes with a display stand with decorative fact plaque and extra porg mini build, to form the perfect centerpiece for your LEGO collection. Creating creatures, circular or natural shaped things, aren’t best suited to LEGO bricks. So the thought of recreating a loveable rotund Porg in LEGO was certainly intriguing. The inner workings of the Porg, are largely created with Technic elements, before being clad in layed sections of LEGO elements. There is the chest area, both sides, each with a separately built wing, the back area and it’s all topped off with the Porg’s adorable face and those eyes, which look deep into your soul. 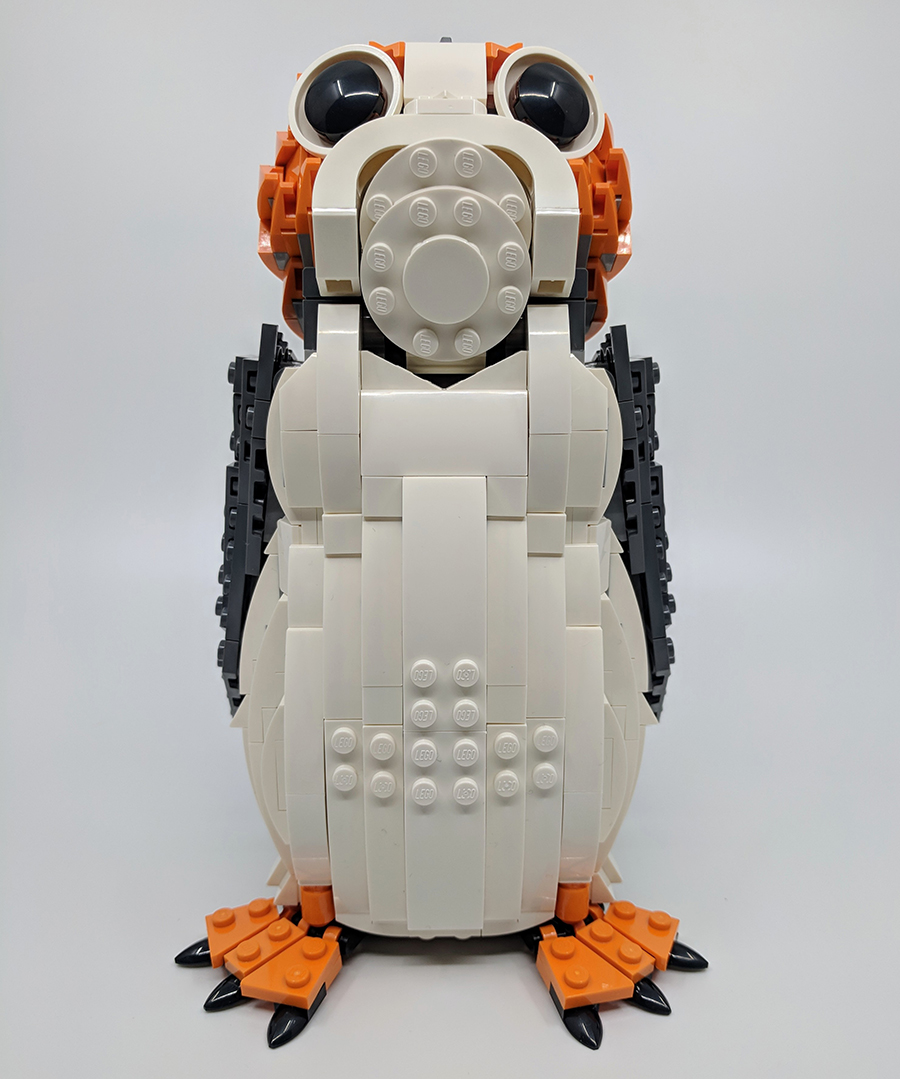 A large number of bow elements are combined to give the Porg it’s rounded shape. With a large amount of angled 45. bows and rock plates impressively combined to give the Porg a feathered look. In fact the use of parts is one of the sets most impressive points. They also make the build quite more complex than I’d have expected. The outer cladding of the Porg is way more tricky than the inner workings. I highly recommend laying out the parts before you start each step. Those angled orange elements can be a little tricky to work out which goes where. 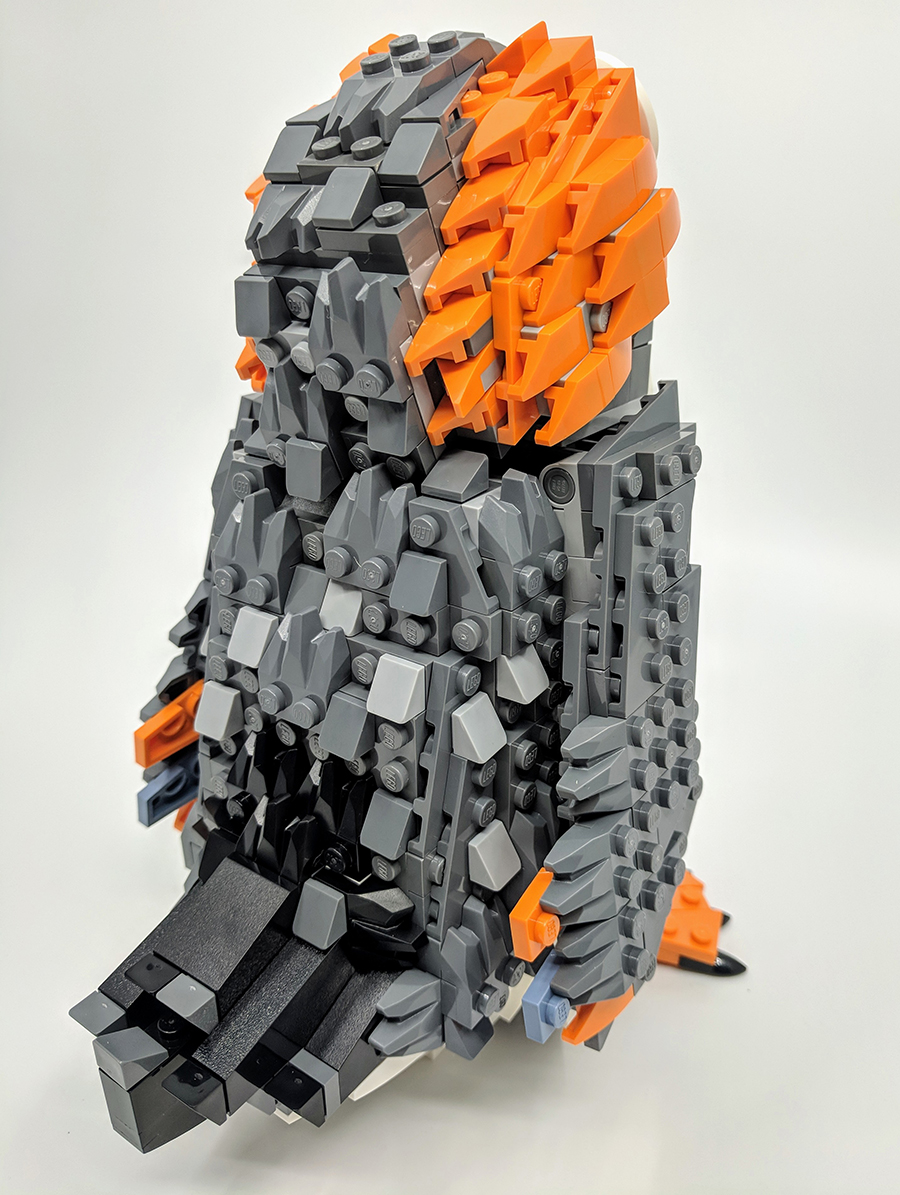 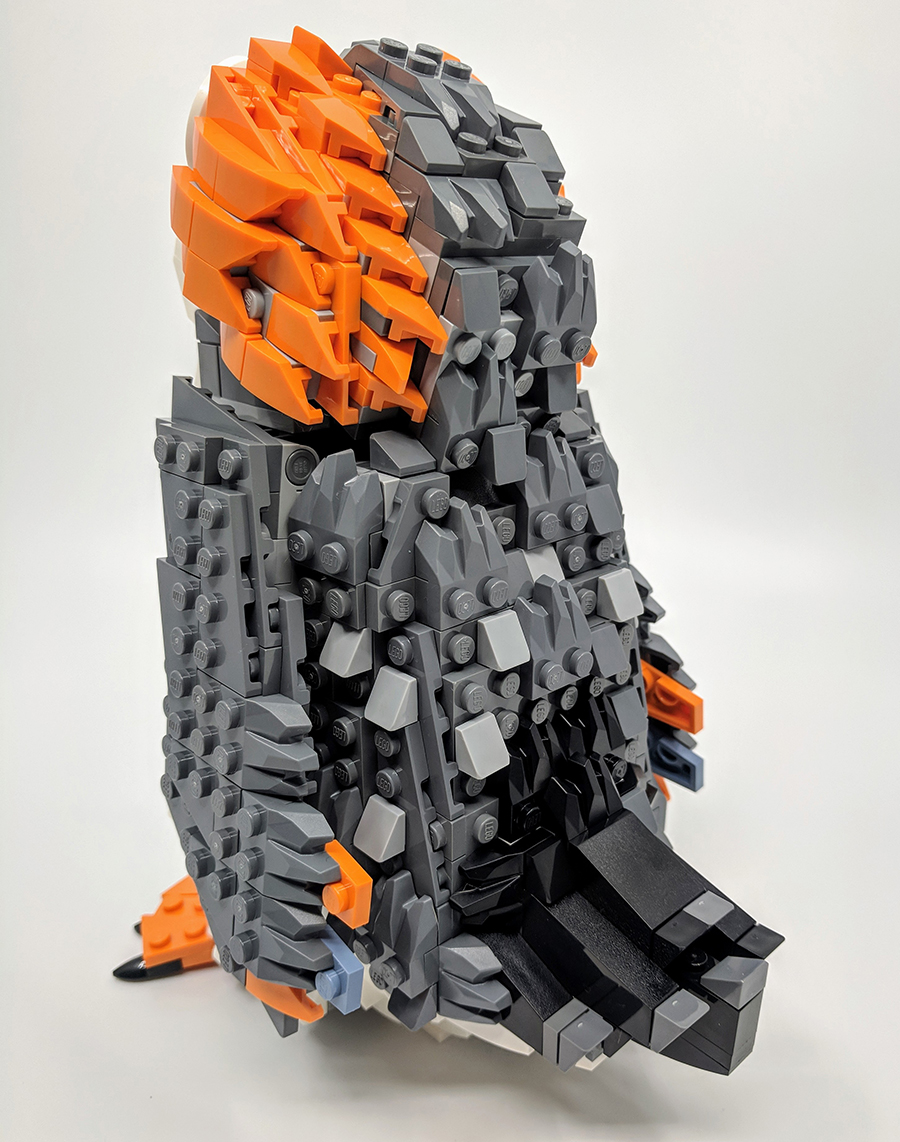 Talking of inner workings, a basic ‘skeleton’ of Technic parts is hidden inside the Porg and connects the tail to the mouth. Pushing down the tail makes the mouth open and the wings to flap. It’s almost as impressive as the movement built into BB-8. Making the set not only a great display piece but also giving it some play functions. 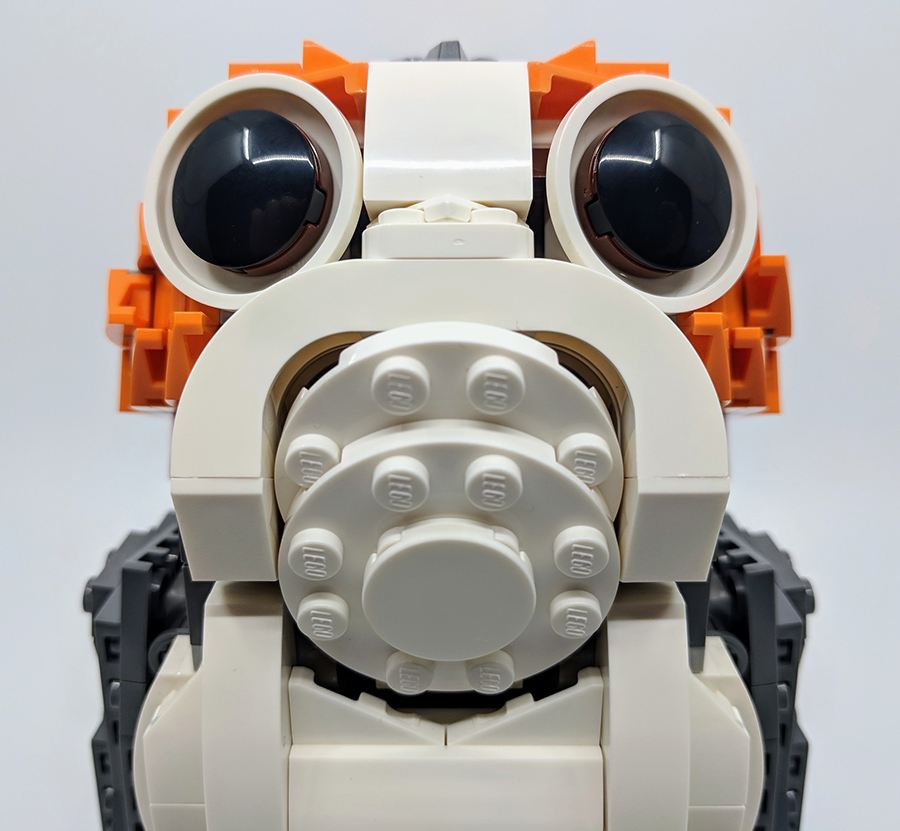 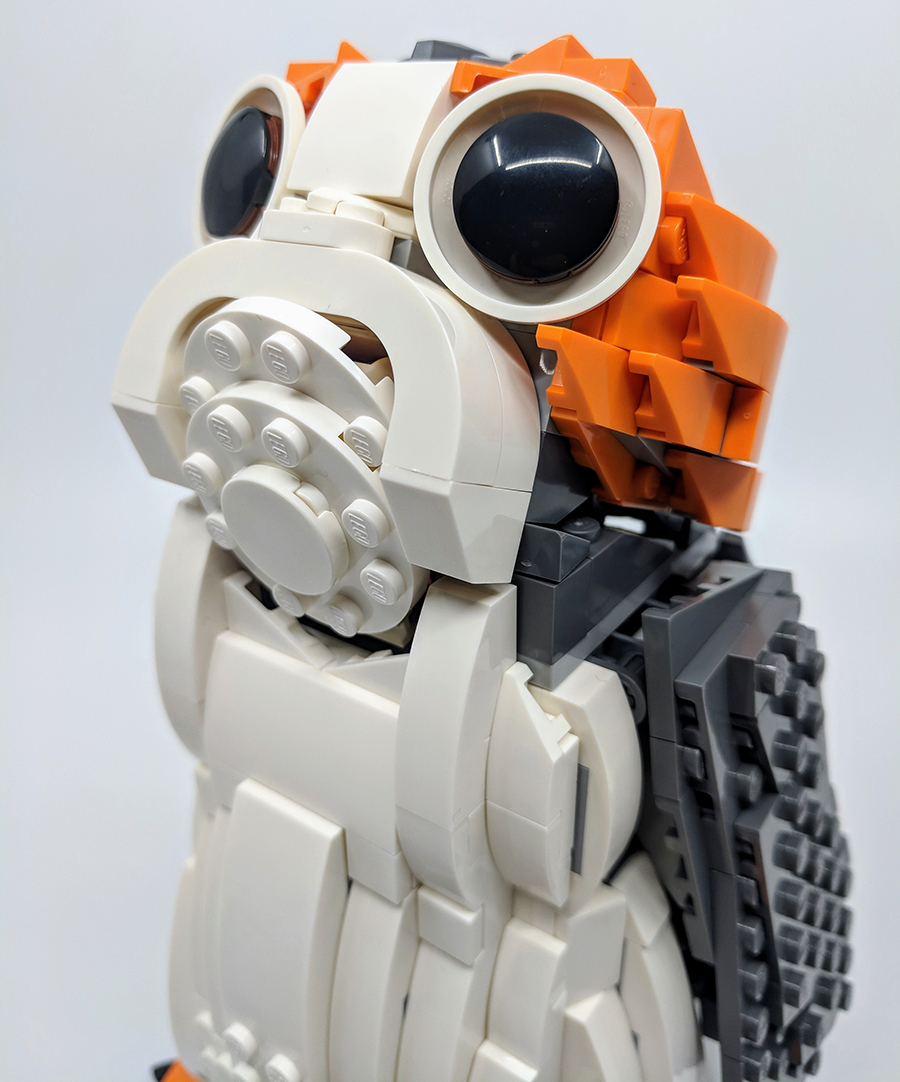 The use of parts really is great, as mentioned above, trying to create natural shapes with standard LEGO elements isn’t easy. This is probably why sets are this sort are few and far between. The designers have done an amazing job of translating the odd looking Porg into a decent looking set. Part use and colours do an amazing job of giving a collection of plastic bricks and almost fluffy look. Star Wars fans will instantly be able to tell it’s a Porg and those unfamiliar with the featured thingy, will be intrigued to see what can be created with LEGO bricks. The set also includes a small display plate. It’s similar to those included with Ultimate Collectors Series sets. Before you get angry about the Porg being a UCS set, it’s not. The display plaque, created with a sticker, includes a little information about the Porg and comes complete with a miniature Porg figure. The set didn’t really need it, but it’s a nice addition and adds to the ability to display the set. I didn’t have a bad opinion about the set before building it, but I always try to keep an open mind with any LEGO set I see or build. I also didn’t hate the Porg. However I really like this set, the build is fun and more complex than expected. Plus I love the movement functions. I think I expected it to be bigger, but having built it, I would probably say it’s about the same size as an actual Porg would be. If you hate Porgs with a passion, then this set probably wouldn’t be your cup of tea anyway. But if you fancy building something different and unique, I recommend giving this set a chance. It makes a welcome change from all those ships and vehicles, which influence so much of the LEO Star Wars theme.