The LEGO® DUPLO® range doesn’t often get much love on the old LEGO fan sites, but despite being aimed at the youngest builders; it has some pretty cool sets. We took a look at the first festive DUPLO set just before Christmas and that seemed to go down well so we thought we do another DUPLO set review. We love a little bit of Hulk here at BricksFanz so when the angry green fellow appeared in his first DUPLO set, we just had to add it to our collection. Hulk is joined by fellow Marvel super hero, Spider-Man and the sandcastle loving bad guy, William Baker aka the Sandman. So let’s take a look at Marvel’s cutest heroes yet, in our review of set 10876: Spider-Man & Hulk Adventures. Little superheroes will love to create endless role-play adventures with this Marvel superhero toy, as Marvel’s Spider-Man and Hulk try to stop Sandman from stealing an important suitcase. Help young children develop fine motor skills as they build and rebuild Spider-Man’s garage and Hulk’s laboratory at Avengers HQ, then use the wrench to fix up the motorbike before Spider-Man speeds off to save the day! Includes 3 LEGO® DUPLO® figures: Spider-Man, Hulk and Sandman. 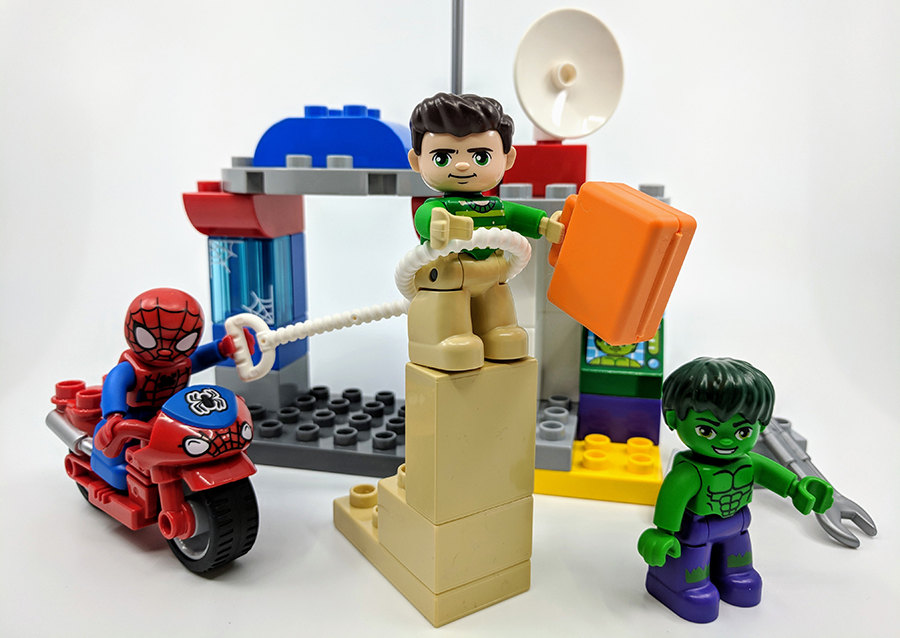 Older fans of the Marvel universe may look oddly upon the team-up of the Hulk and Spider-Man, but this particular LEGO set is based on the recently launched new Marvel Super Heroes Adventures campaign by Marvel and Disney. This is fun new take of some of Marvel’s mightiest heroes, aimed towards a younger audience. In this adventure, the web-slinger and the Hulk, team-up to bring down the Sandman. The set includes two sections of the Avengers HQ – Hulk’s Laboratory and Spider-Man’s garage. 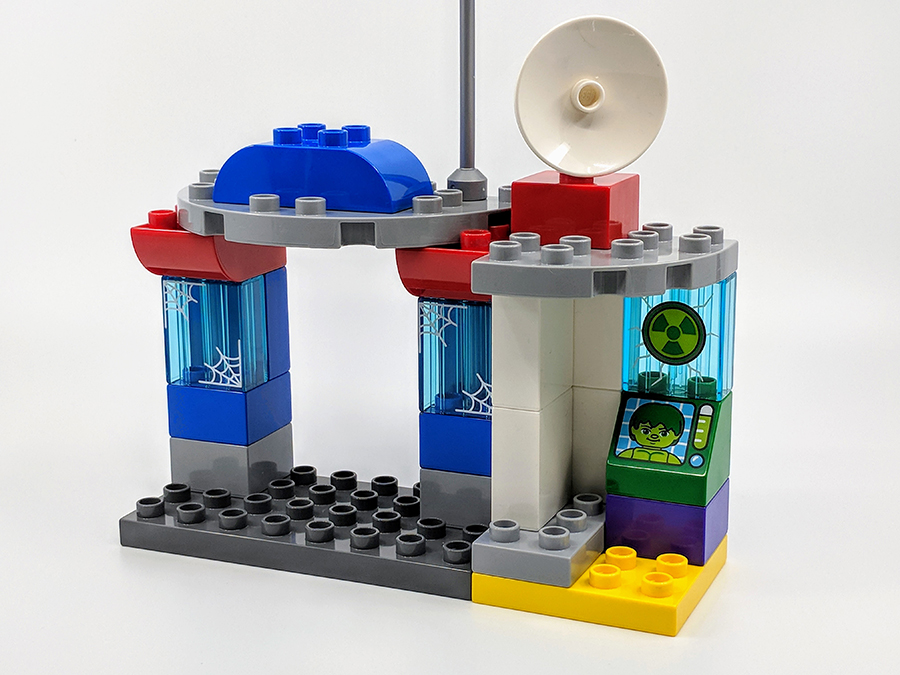 DUPLO bricks are much larger than LEGO ones, but they work in basically the same way and sets now includes fun special elements; but still safe for younger builders to interactive with. Another great thing about DUPLO elements is they are always printed and this set includes some fun graphics. In particular Hulk’s Gamma Ray computer terminal, which features an illustrated version of the Hulk DUPLO figure. 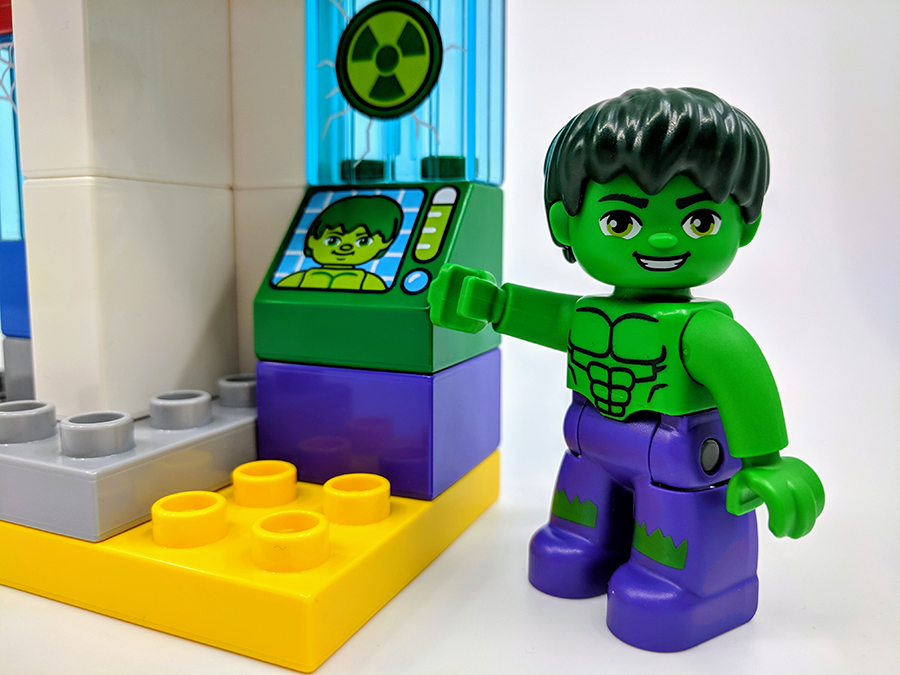 This is incorporated into a small corner lab section, which is nice an colourful and easy for small hands to put together with a little help, of course the best bit is the printed computer terminal and Gamma Ray tank. The second part of the Avengers HQ is Spider-Man’s garage, to be honest is doesn’t look very garage like but does come in the Spider-Man colour scheme. Because if Super Heroing has taught us anything, it’s that branding is everything. Just like the lab section, this part is also easy to put together. 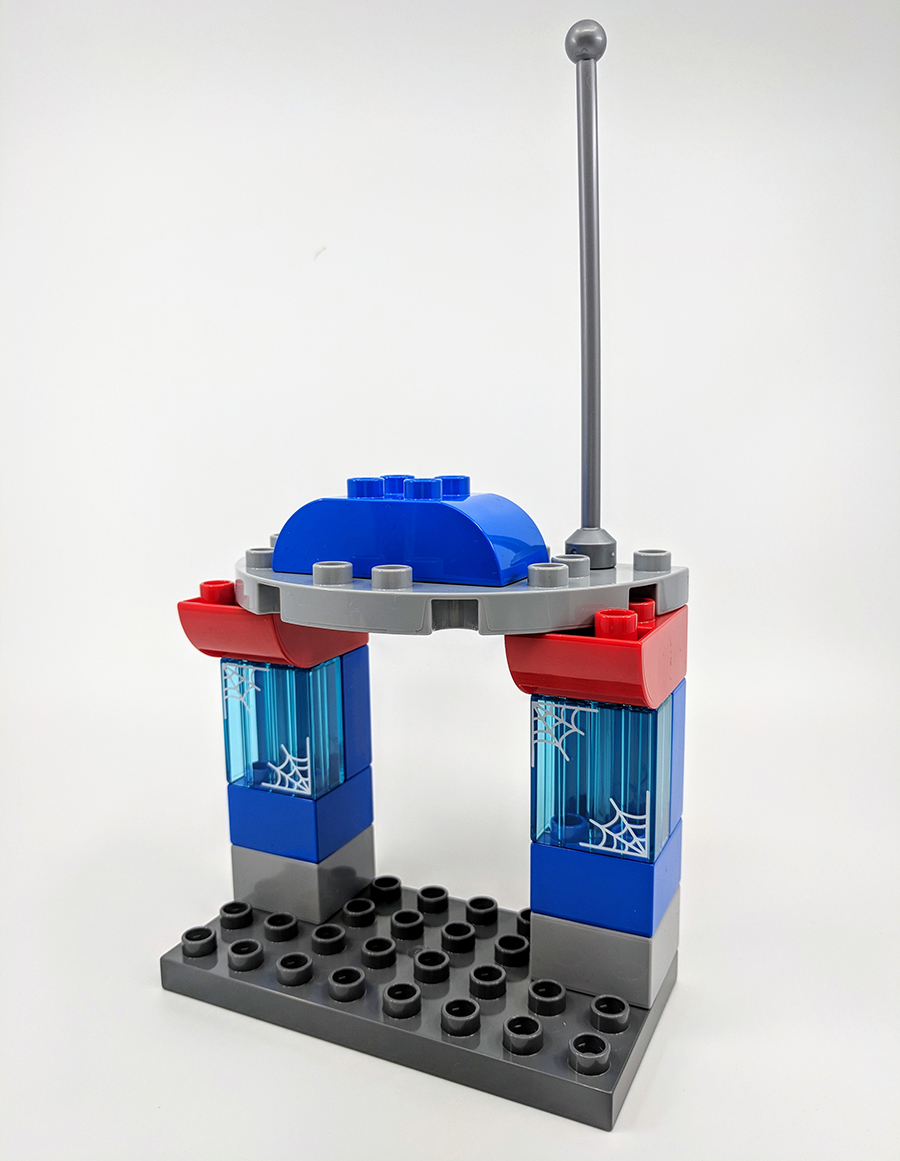 Despite being able to swing through cities on webs and crawl up walls, the animated version of Spider-Man has a vast array of vehicles to help him get around and the Super Heroes Adventures version is no different. Here he includes his Spider-Cycle. It may be DUPLO, but it’s very cool, especially with the printing at the front of the bike. The Spider-Man figure fits nicely onto it and it can also be built on thanks to the 2×2 studs on the bikes rear. 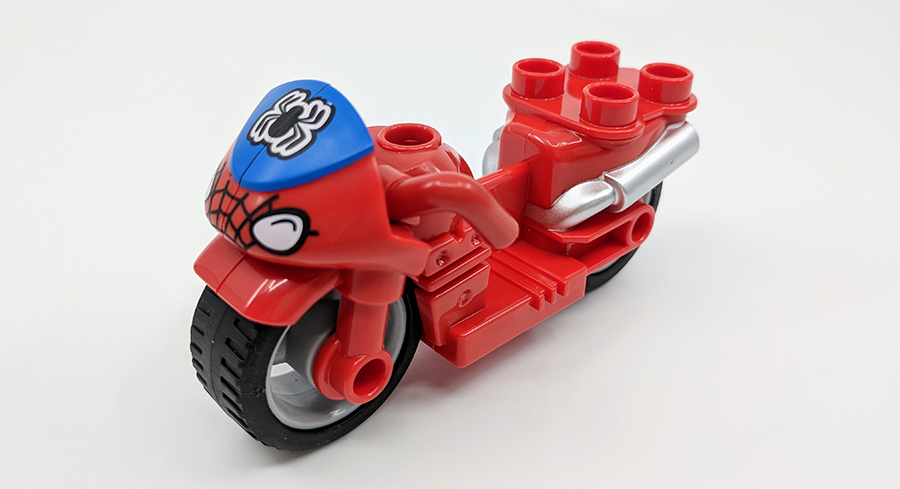 The final part of the set is the simplest and includes sets bad guy, Sandman. Just like is LEGO counterpart, the Sandman figure is partly coloured in such a way as to give the illusion he is shifting from a tower of sand thanks to the brick yellow DUPLO bricks matching the colour of Sandman’s legs. 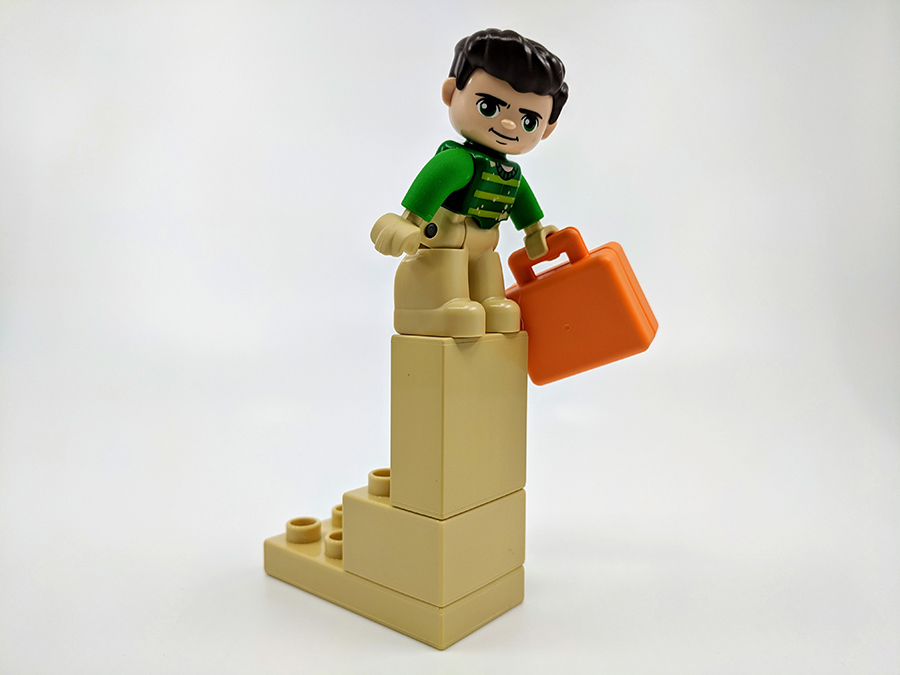 As someone way outside the sets target audience, I must admit the only reason I picked up this set was the figures. The sets contains three – Hulk, Spider-Man and Sandman. Just like the minifigure, DUPLO figures have their own unique look, with points of articulation at the hips, arms, hand and head. Despite their unique design, each figure looks like the character they are meant to be. Sure Hulk probably look the least angry is ever has but you have to admit he’s still quite cool. 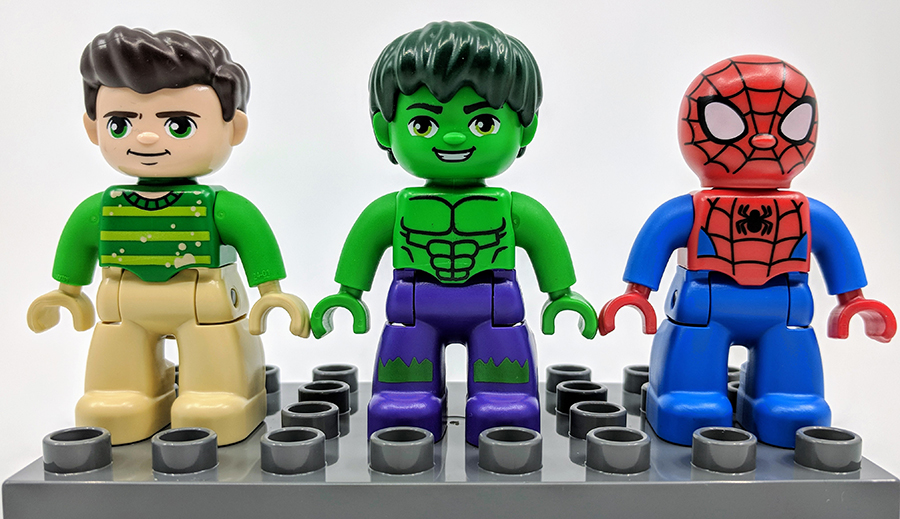 Spider-Man look at little odd when stood next to the other two figures, due to the lack of ears and hair, both of which have become a staple of the new design of DUPLO figure, but is they were included he was look plain wrong. How ever much I love the Hulk, the best figure is Sandman, who has great print detail and a shifty enough looking face to pass for a bad guy without being scary. DUPLO sets are a great way to introduce LEGO fans of tomorrow to the fun of building. There have been a number of branded sets over the years, but the super hero-themed ones are the most fun. Seeing much loved characters reimagined in a different style of figure is always fun and will certainly help connect those younger builders with some of the LEGO Juniors and system sets as they get older.