As I exclusively revealed a few weeks ago, The Brickman Experience will be heading to the UK next month, as the LEGO® exhibition debuts in Leicester. The event will take place within the Highcross Shopping Centre between March 13th until April 20th. The event will require tickets and will be enclosed within one of the ‘event’ units within the shopping centre. The event begins the same weekend as the Brickish event at the National Space Centre. So perfect time to head to Leicester. Tickets will go on general release on Friday. Learn more about the event below. 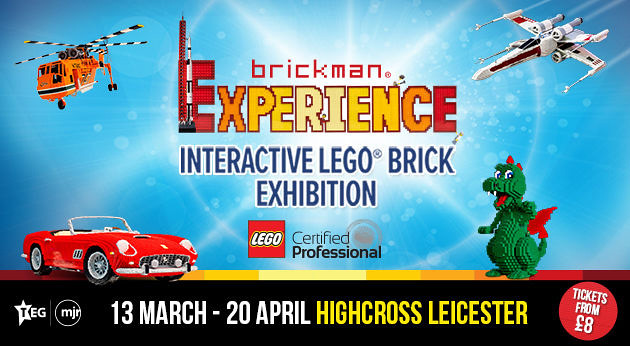 In a UK first, Ryan McNaught’s Brickman Experience – the original of the Brickman’s 4 touring LEGO® exhibitions – is arriving at Highcross Leicester in March!

The interactive exhibition, suitable for little kids and big kids (LEGO® code for adults!) will be at Highcross from 13th March through to 20th April.

Made from over five million LEGO® bricks, this epic exhibition showcases some of the world’s largest and most detailed LEGO® models including a huge LEGO® Star Wars X-Wing, Airbus A380, a quarter-scale LEGO® Ferrari and the world’s largest LEGO® flower – You’ll also have the chance to get a photograph with all the James Bonds made in LEGO® bricks.

Brickman Experience features a collection of over 60 individual works by Ryan McNaught – the only LEGO® Certified Professional in the Southern Hemisphere and one of only 14 in the world. Ryan and his team’s award-winning creations have featured in locations around the world, and now to Leicester and the UK for the first time.

Leicester’s budding brickies will also have the opportunity to build their own LEGO® creations in the interactive master builder zones.

“I am really excited that the Brickman Experience is heading to Leicester. This exhibition is very special to me because it is the original collection of my individual works, brought together in one space, for everyone to enjoy.

We’ve had huge success with the exhibition across the world, so it only seems fitting we bring it to the UK!” said Ryan McNaught.

Showcasing a collection of LEGO® models that are fun, inspirational and memorable, attendees will enjoy an interactive and hands-on experience, whilst learning about each individual model.

Ryan adds, “LEGO® brings people together, everyone loves it – kids, parents, grandparents, everyone has a memory of playing with LEGO® and I’m looking forward to sharing my creations with LEGO® fans in Leicester and meeting all the budding brickies out there!

“Brickman Experience is a great activity for all the family to enjoy – no matter what age you are! I’ve got a few exciting things for the kids (and big kids!) to participate in, so everyone can enjoy creating brick masterpieces as well as enjoying the exhibition. It’s going to be heaps of fun!”

Jo Tallack, General Manager of Highcross, said “Here at Highcross we’re committed to making sure there’s something new and exciting every time one of our customers steps through our doors. We’ve worked hard over the past few years to really step up the leisure offer at the destination, adding the likes of Treetop Adventure Golf and Social Climbing, as well as a range of F&B options like tamatanga and Kitty Café, which opens later this year.

“The Brickman experience is another great example of that, as there’s just nothing like it anywhere else in the world. I know there’s lots of LEGO fans in Leicester, so I am sure this is going to be really popular. Anyone looking to come along should book soon as it’s sure to sell out!”

Nathan Stone, Creative Director of TEG | MJR adds “We are very excited to be bringing Brickman Experiences to the UK for the first time with Brickman himself, Ryan McNaught. With Lego fast approaching their 90th year the brand has never been more prominent in popular culture and we are looking forward to a new generation of Lego fans being wowed by the possibilities of the toy!”

Ryan ‘The Brickman’ McNaught used to be a slave to the corporate world but back in 2010, he took his love for LEGO® to a whole new level and traded in the boardroom for a LEGO® workshop! The Brickman Experience allows you to see Ryan’s internationally awarded works all together in one place.

Tickets are essential for this amazing family-friendly experience and will be available from 10am Friday 28th February at www.thebrickman.com.