NINJAGO At 10: A Brief History Of LEGO NINJAGO

Home » Features » NINJAGO At 10: A Brief History Of LEGO NINJAGO

Before ninja were even a thing, the roots of LEGO® NINJAGO can be traced back to the ’70s and a colourful world known as Fabuland. This was the first even LEGO theme to include a story element and would form the basis of future story-driven themes including NINJAGO. Over the years story-driven themes have been split into two camps – in/out and big bang. Themes classed as ‘in/out’ are often a single wave of sets or just a couple of years worth of releases for example Monster Fighters. Big bang themes were often planned to last a little longer and have included Legends of CHIMA and more recently Hidden Side. Fast forward to 2009 and the dawn of a new idea. 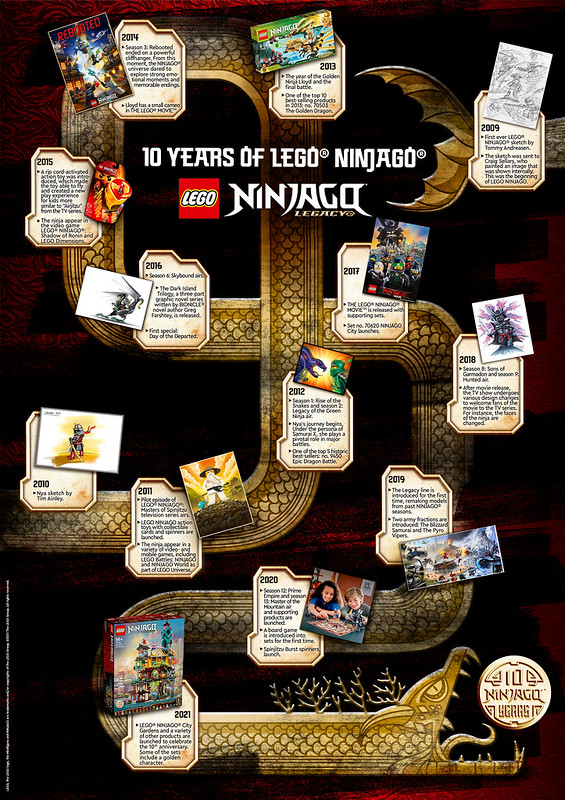 Late on a Friday in fall 2009, a drawing was made that would be the beginning of something big. Tommy Andreasen did a sketch showing different elemental ninjas and the team had the idea of the ninja being on a sort of spinners to make an active Minifigure play. On the drawing, you see a ninja of water, though that ended up not being added until Nya became the master of water in 2015. The sketch has the word ‘Spinjago’ on it, which was the first idea of a name, which then developed into ‘Spinjitzu’ – a combination of the words ‘spin’ and ‘ninjitzu’.

The ‘NINJAGO’ name was also a combination of the words ‘NINJA’ and the word ‘GO’ which was taken from the end of the LEGO Group company name. It was also thought to be a great activator, like a battle cry. 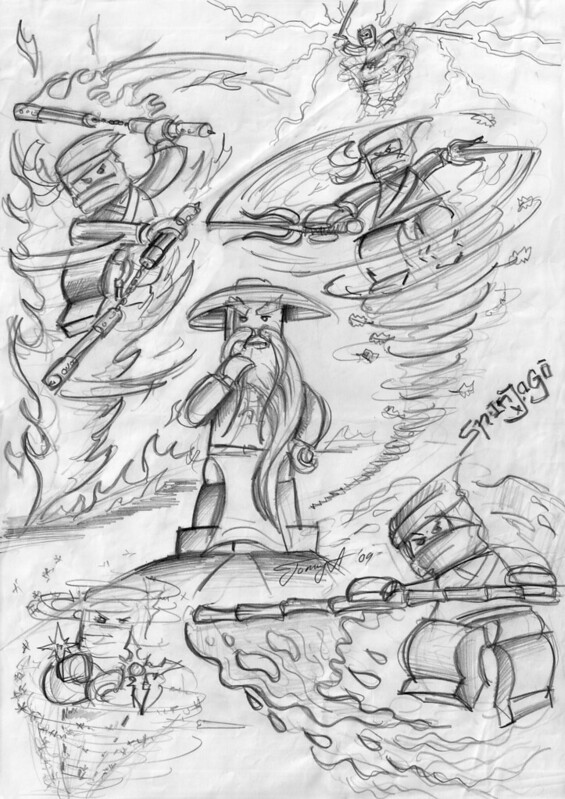 NINJAGO became the latest Big Bang theme, with the accompanying TV show and sets planned to last a couple of years. Originally, the NINJAGO theme was supposed to end after season 2 in 2012. In fact, it’s replacement, Legends of CHIMA was launched in 2013. However, a ninja never quits and the exceptional fanbase, which had grown around the NINJAGO, saw the theme return after a brief hiatus, the continued success led to both show and products continuing. It’s now become an evergreen theme alongside LEGO City, LEGO Friends and LEGO Star Wars.

2021 marks the ten year anniversary of the NINJAGO television series, as it has been in production since the release of the first pilot episode in 2011. This milestone reflects the continued popularity of the show amongst its audience. In 2021 we will be launching season 14, which will be a tribute to the voice actor Kirby Morrow, who gave Cole his voice for many years, who sadly passed away recently.

In NINJAGO there isn’t one lead character, it’s about the team. But since the beginning, every season has had a different character focus, helping the kids to learn more about each individual character. The focus of the 2021 storyline is Nya and her elemental powers.

NINJAGO will continue to have a long life within the LEGO community. The 14th and 15th seasons of the TV show are in production and the NINJAGO Design Team are busy working on plenty more new sets for fans to enjoy.