Last week we got to spend the day at LEGOLAND Windsor Resort, while there we got to check out the new LEGO NINJAGO World including NINJAGO: The Ride as well as take a peek at the new Castle Hotel. Over the past year the park has seen a few minor changes which are worth a mention including the introduction of THE LEGO Coffee Co, which is a new food and drinks concessions stands operated by Costa Coffee. These can found in The Beginning and next to the Fire Academy, are they are embellished with fun coffee-themed Minifigures. On the subject of grub, the burger restaurant in Heartlake City/Pirate Bay are now become a Fish & Chip eatery, offering even more food choice at the park. 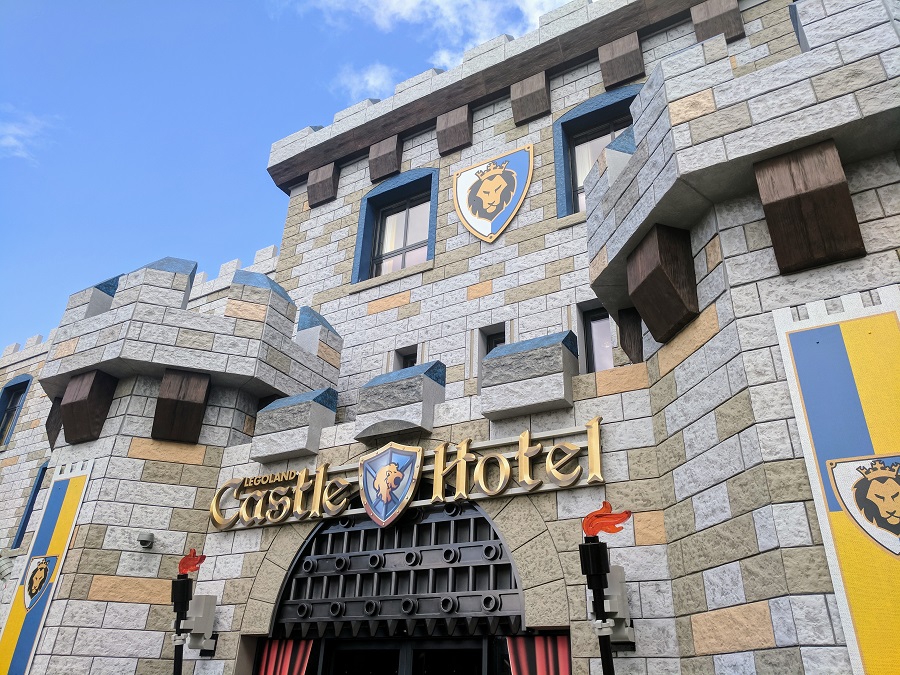 Elsewhere in the park, a LEGO Masters-themed build room has popped up in the Imagination Centre next to the recently opened Minifigures & More store. The darkened room is filled with tables, each sporting a bucket of LEGO elements and plenty of troughs crammed with even more bricks. Builders are challenged to build a creature and here’s our attempt below, which got the thumbs up from LEGO Masters judge and VP of Design at LEGO, Matthew Ashton. I believe this area will only be around for a few weeks but it was great fun to sit and build for while so I hope it becomes a permanent addition to the park. 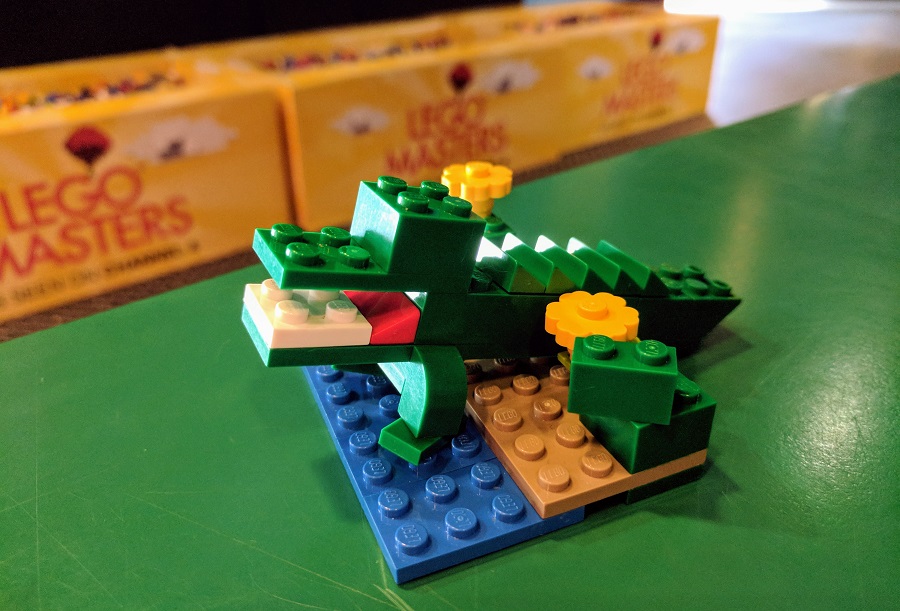 You may remember this area use to be home to the LEGO Video Game Xbox Zone, this has now been relocated and re-branded. Now known as the LEGO Games Zone Powered By PlayStation, you can get your LEGO game on in the old retail area of the Laser Raiders ride. Despite the new location and new consoles to play on, most weren’t working or were switched off, which was a shame. Still it’s nice to see LEGO Games represented and most recent titles on show including LEGO Worlds.

One of the first new sections of the park we got to check out was the new Castle Hotel. This is located between the Sea Life Atlantis Submarine Voyage ride and the original LEGOLAND Hotel. It looks incredible with two brick-built Minifigure Knights atop their LEGO steeds in the courtyard and a small wooden adventure playground area.

The entire facade is covered to look like a castle, complete with oversized LEGO elements to represent flaming torches and flagpoles. The main reception is equally impressive with a LEGO brick-filled moat around a huge LEGO themed centrepiece of brick-built wizard and a large LEGO element filled display hanging from the ceiling. It looks great fun and I’d definitely love to spend the night there, so I’m sure kids would be absolutely amazed by a stay there. 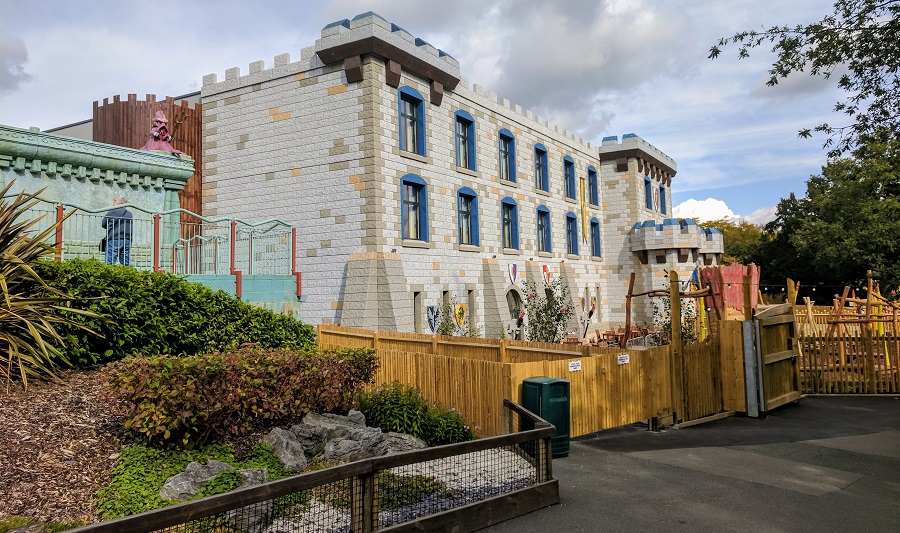 But the main reason we headed to LEGOLAND Windsor was to unleash our inner ninja and check out the new NINJAGO World and NINJAGO: The Ride. This has been built in the area previously taken up Loki’s Labyrinth and part of Vikings Landing. It can be easily accessed from the lower stop of the Hilltop Train or just passed the Kingdom of the Pharaohs. It does look at little odd seeing a huge new building in the centre of the Vikings River Splash ride.

The whole area is themed around the world of NINJAGO with brick-built models of each of the main characters and a huge model of a temple atop hill, which also doubles as a build area. To the right of the main entrance is the Destiny’s Bounty ride and a small climbing wall, but the main focus is of course the new 4D ride which is the first of its kind in the UK. This makes use of new technology and effects to offer a unique immersive ride, in simple terms is could be described as a mash-up of the Laser Raiders ride and the 4D Cinema.

As you make your way through the NINJAGO themed queue area, which I have to admit is a little dark, especially as there are stairs involved, you come to a window area where you collect your 3D glasses. Then you make your way to the actual ride bay, where each track-mounted pod can seat four people. The pods have a flat front panel, which is home to the new technology that registers hand movements and turns them into on-screen elemental powers. As the ride whips past a series of 3D screens you must use your hands to blast on screen enemies with your new found magical powers. You are also blasted with air, heat and smoke to really get you immersed in the whole experience. It was incredibly good fun and works surprisingly well, my partner in crime for the day had no interest in going on any rides. After being convinced to go on the ride, he loved it so much he went on again, a true testament to how much fun the ride is. One of my main concerns about the park, on each of my visits there, is the small attentions to detail that need a little TLC, although some of these are slowly being addressed there are still areas of the park that are looking a little tired. There’s also plenty of parts of the park which could do with a few more LEGO models to inhabit them. As you walk around the lake, there are plenty of grasses verges and the lake itself which feels a bit bare. I’d love to see a huge Brickley the sea monsters leaping out the lake or a few more modern LEGO themes represented with dioramas. 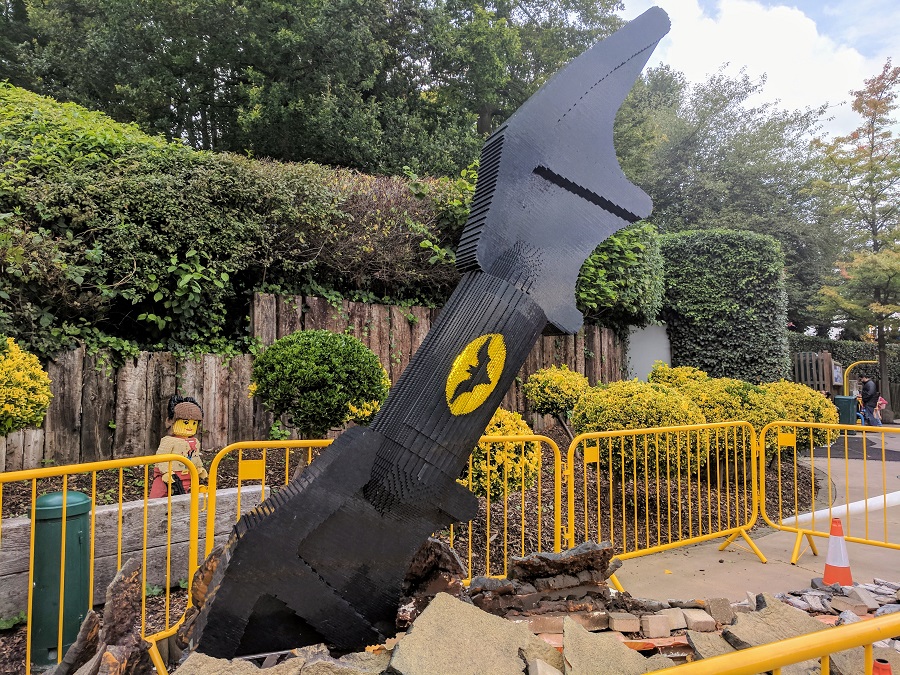 But this is the raging LEGO nut within me and will not even register to the average visitor. With LEGOLAND Windsor Resort now the most visited of Merlin’s UK attractions, hopefully the parks rejuvenation will continue and this may already be in motion as a selection of planning applications have been submitted which will see some major changes occur over the next few years, including a brand new entrance experience, a big new ride along with a new campsite and cabin area. 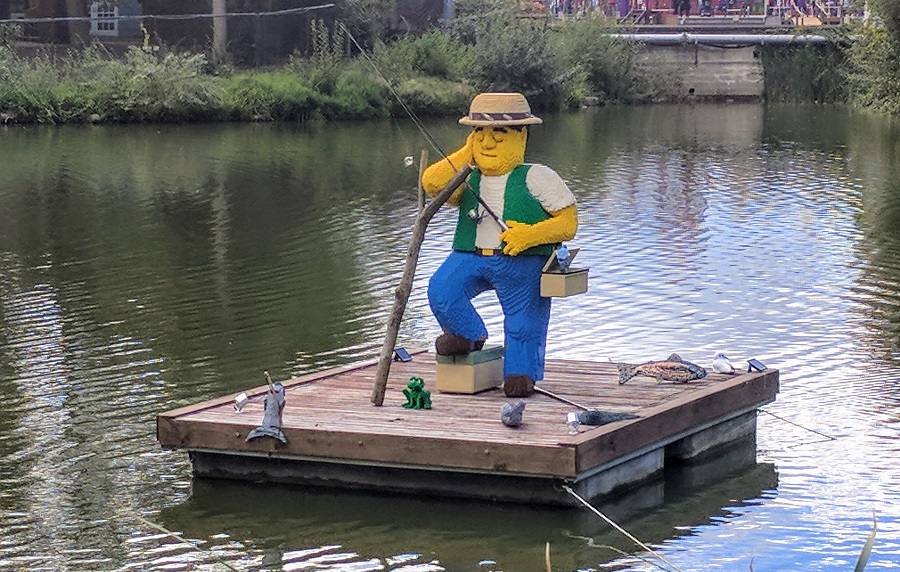 We would like to thank the press team at LEGOLAND Windsor for allowing us to visit the park and if you want to experience it for yourself you can book tickets for the remainder of this season here. There are also a number of seasonal events to enjoy including Brick or Trick, a NINJAGO Firework Spectacular, Christmas Village and see in 2018 with a New Year party.