It was honour of being the first licensed LEGO® theme and is often credited with turning the fortunes of the LEGO Group around after a tricky period, as well as reigniting many peoples love of LEGO. Now 20 years on, there’s been more than 400 sets released, from the smallest keychains to Ultimate Collectors Series sets with thousands of bricks. To mark the 20th anniversary of the LEGO Star Wars theme, five classic sets have reimagined as five new releases. Each set features a special 20th anniversary collectible Minifigure, styled after the characters original LEGO appearances in the early years of the theme.

The original Imperial Dropship was released in 2008 as set 7667: Imperial Dropship. Although it hasn’t appeared in any of the Star Wars movies, it was created as a ‘Battle Pack’ type set, which could expand your Minifigure army. Both editions of the set features three Stormtroopers and a Shadow Trooper. The 2019 edition also includes the 20th anniversary Han Solo Minifigure complete with collectable display base. 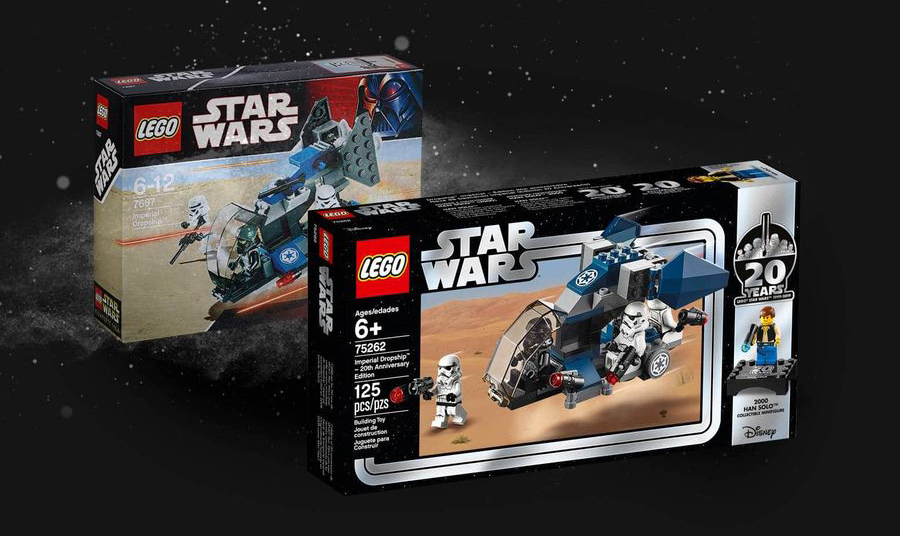 Regardless of your thoughts on the Prequel Trilogy, the Podracing scene in Episode I was pretty exciting. It’s also the inspiration for original set 7131 from 1999. The 20th anniversary edition sees the piece count jump from 136 to 279, which results in a nicely detailed version on the Boonta Eve Classic winning racer. The latest edition also includes a Luke Skywalker Minifigure. 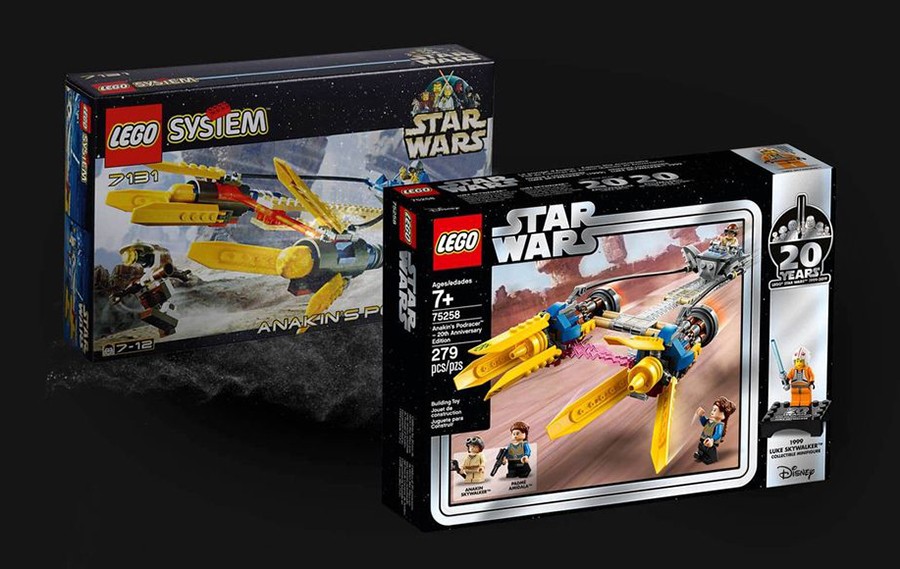 The Snowspeeder has appeared in LEGO form many time over the past 20 years, and one of its first appearances was in the 1999 set 7130. This version was a strange mix of grey and orange, fast forward to 2019 and the 20th anniversary edition is a little more faithful to the on-screen Snowspeeder. The set features the coolest cat in the galaxy for its 20th anniversary Minifigure, the legendary Lando Calrissian. 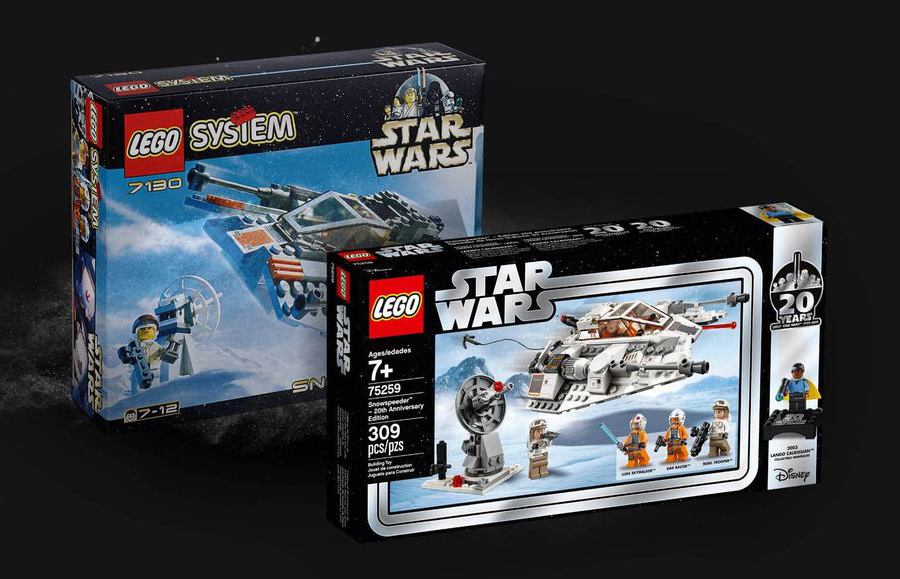 In Episode III, we visited the Wookie homeworld of Kashyyyk, where the Clone Army helped the Wookies to fight the Battle Droids. In 2005 a AT-RT walker featured in set 7250, the 2019 version is much more detailed and features a much better suited Clone Scout Trooper Minifigure. The set also features Darth Vader as the special 20th anniversary Minifigure. 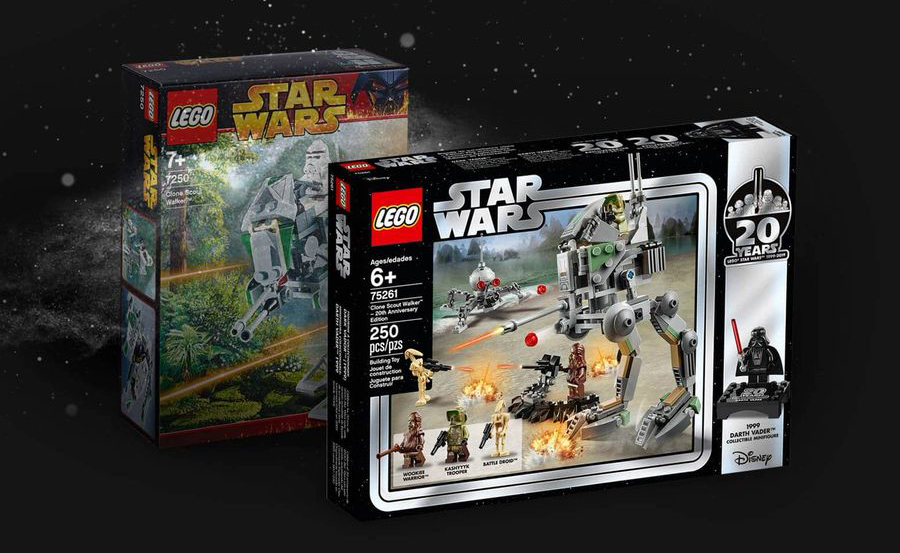 One of the sets which is vastly different between the original version and the 20th Anniversary edition is Boba Fett’s Slave I. The set from 2000 did decent a job of the bounty hunter’s ship, but new elements has resulted in a much better version for the 20th anniversary re-release. The set also marks the Minifigures debut of Zuckuss, finally completing the Empire Strikes Back bounty hunter line-up. Completing the classic Minifigure line-up is Princes Leia. 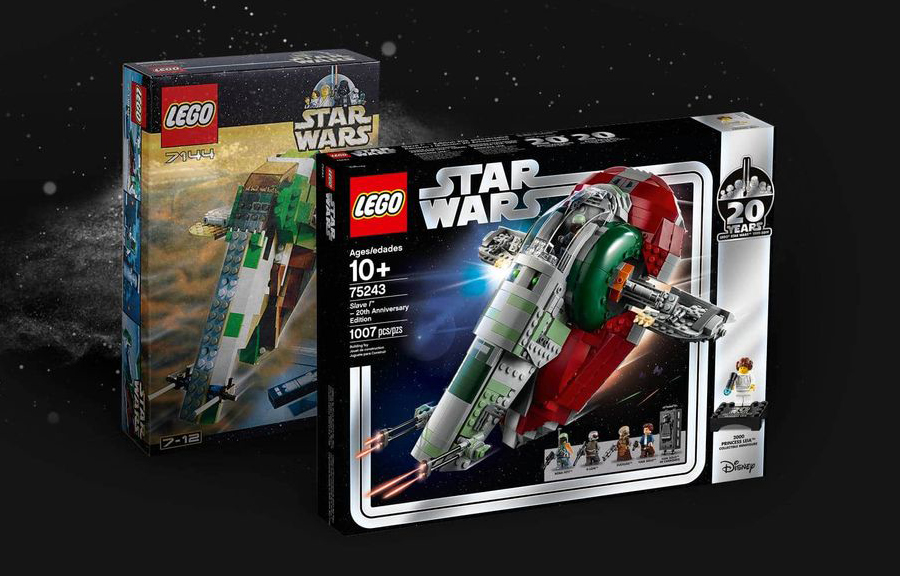 Each of the set above includes a re-released ‘classic’ Minifigure. Back in the early days of LEGO Star Wars sets, the characters featured yellow skin, like all other Minifigures. Over the years that has changed to flesh toned skin. To collect them all you’ll need to get each of the 20th Anniversary sets. But there is another…. a sixth 20th Anniversary Edition Minifigure is expected to appeared soon and it will be Obi-wan Kenobi (30624). This polybagged Minifigure is rumoured to be released alongside the rumoured new LEGO Star Wars videogame.